31 Days of Toy Terror: Batros from Masters of the Universe Classics by Mattel 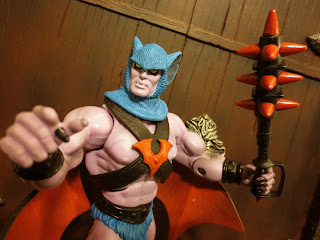 Who is Batros? He's both a lover and a fighter. He's a joker, a smoker, and a midnight toker. He's the man that women want and men want to be. He's also a purple bat-like villain from Filmation's He-Man and the Masters of the Universe cartoon who appeared in the second season episode "The Great Books of Mystery" as a magical book stealing thief. Having never before been released as an action figure, Batros was an eagerly anticipated addition to the Masters of the Universe Classics line for many fans. Not only is he a fairly interesting looking character but he also wears a red bat on his chest that has long endeared him to many fans of the Horde. Released as the Club Filmation figure for September 2013, Batros is here to add another flying foe to the ranks of the Evil Warriors. Since he's a creepy bat guy, I'm also feeling completely justified in covering him during our 31 Days of Toy Terror. Read on and enjoy! 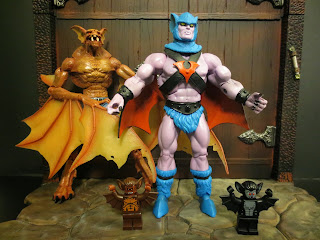 If you're not aware by now Masters of the Universe Classics figures share a lot of reused parts. This actually work to their advantage, though, in ensuring that the scale of the figures is always congruent with one another. Batros is right around 7 inches tall from his boots up to the tips of his pointy ears. While he's based on a character from the Filmation animated series, he doesn't look overly simplified like some characters have (Shokoti and Eternos Palace King Randor come to mind) and in fact looks like he could easily have been based on a vintage figure from the first year or two of the original vintage line. 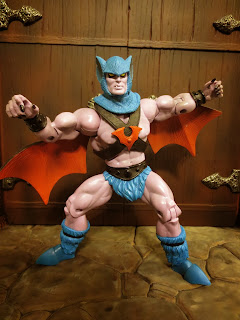 Batros comes with all of the standard joints you would expect to find on your average MOTUC figure: hinged ankles with some lateral "rocking" motion, swivel botts, hinged knees, swivel thighs, ball jointed hips, a swivel waist, a mid-torso hinge ball jointed shoulders, swivel biceps, hinged elbows, swivel wrists, and a ball jointed head. I love the MOTUC articulation and it's all perfect here. Nice tight joints and excellent QC. While Batros' wings are molded onto his biceps and feature no articulation themselves, you can still get some excellent poses out of him whether he's flying or standing. 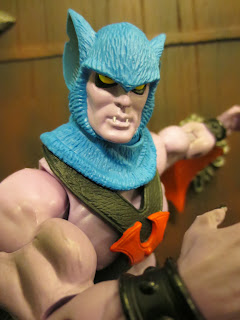 Batros has a pretty basic body but is jazzed up with some new pieces. First, take notice of his boots. They're really cool and furry with a strap holding them up. He also has unique feet that are odd, sort of like hooves or something. The wings are exceptional! The hang down nicely from Batros' biceps and have a great leathery texture to them on both the front and the back. They're made of a nice flexible plastic- not too hard, but not too soft, either. And the head sculpt? I love it! Batros has a removable neck piece that helps to give him the furry collared look. The head also looks pretty menacing. I mean, it's an odd look for a humanoid bad but it works for Batros. I like the way the ears have the little notches on them and Batros' exposed fangs. Batros simple harness (also removable) completes the look. It's got a red bat signal on it that could easily fit alongside your Horde members, if you chose to add him to those ranks. 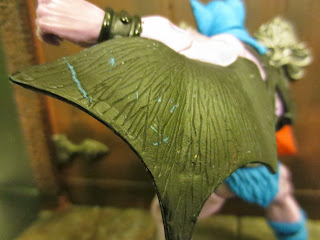 The paint has some problems. The colors look great as the purple body goes great with the blue blue details and the black and red wings and armor. The paint is very clean on the edges, even on small parts like Batros' eyes, fingernails, and fangs. It's the fact that the paint seems to be very easily rubbing off of my figure that bothers me. I'm noticing paint that has been misapplied on Batros' right thigh and that's rubbing off from the back of his harness and all over the front and back of his wings. It's disappoint because Batros looked so amazing, but little errors like this definitely make me less enthusiastic about a figure I love, and I really want to love Batros. 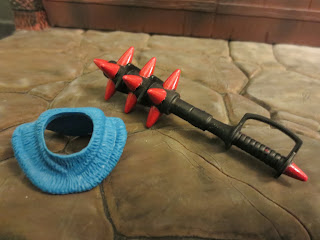 His accessories are pretty limited, too, as he doesn't even come with two accessories, unless you count his neckpiece and his harness (pieces never counted as accessories until Netossa earlier this year). The only accessory he does come with is reused: Spikor's mace. It's molded in black this time and features red spikes, so it actually looks pretty awesome and works great with the character, but I'm shocked that this is all we get. Maybe a stack of books (or one individual book)? Another Filmation artifact? I guess Mattel had to budget for the wings and extra armor pieces here. 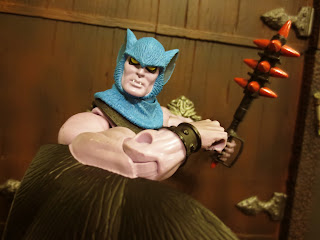 Overall, I love Batros design and the way he was translated into MOTUC, but I can't help but shake my head at his lack of accessories and his glaring paint issues. If it weren't for the paint issues, I'd still easily be able to consider Batros a Great figure, but with those factored in he's more Good and a 1/2. I'm glad to have him as an eerie bat warrior never goes unappreciated, but I hope his paint problems are a one off issue and not the beginnings of something new for Mattel.