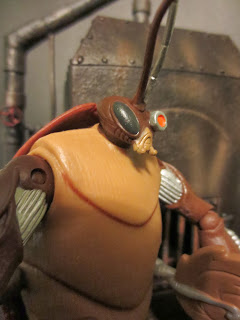 While they're probably not on the upper pantheons of horror, bugs and robots do freak some people out. Now how about combining the two? One of the newer figures from Playmates new Teenage Mutant Ninja Turtles line based off of Nickelodeon's TMNT animated series is Cockroach Terminator. Since I'm watching the series as it comes out on DVD I'm not far enough to have much knowledge of this guy yet, but that's never stopped me from reviewing a figure before. He's not the first roach themed villain from Teenage Mutant Ninja Turtles (remember Scumbug?) but he is the latest. Do robotic cockroaches have a place in the 31 Days of Toy Terror? You'd better believe it! Join me after the break.... 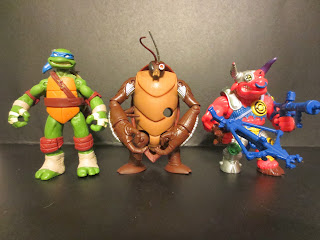 Cockroach Terminator is about 4 1/4 inches tall without his antennae (he's closer to 6 1/2 inches with it) and has a nice toy like appearance to him that should make him fit in not only with your newer TMNT figures, but even your vintage ones if you so desire. Who's to say how big a mutant cockroach should be? He does have abut more detail than some of the other figures, but this doesn't hinder his fitting in with other figures from the line in the least. 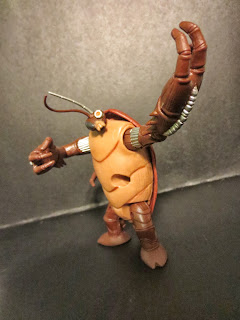 Cockroach Terminator has a bit more articulation than I expected. He features peg/post ball jointed hips, a swivel small arm, peg/ post ball jointed shoulders, peg/post ball jointed elbows, and a swivel neck. While you won't get too much motion out of the legs since there's no knee joints, the arms give the figure a nice range of motion for fighting with the turtles. The little extras like the swiveling right feeler also make the figure just a little bit more fun than your average non-turtle mutant. Most everything feels very solid and sturdy, although the neck swivel is so tight that it's tough to turn. 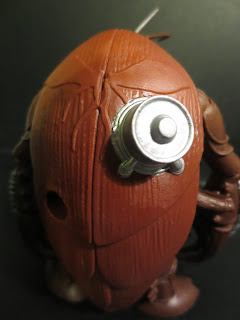 The sculpt is really good. While most of the sculpt is very much insectoid and cockroachy, there are also lots of robotic touches that spice things up nicely. The armored bug exoskeleton is well done and there are lots of little details on his limbs. The back is cool too and is spot on to a real roach. The robotic elements are visible on Cockroach Terminator's giant arms as you can see the metal robotic endoskeleton running through the limbs. There's also a giant hole through the left side of the mutant, but we'll get to that in a minute. The head sculpt is fantastic as half of it looks like your standard roach but the other is a very Terminator styled red eyeball. Oh, and while one of his antennae is a standard bug antenna, the other is a metal antenna. I wonder if he gets a signal with that thing? 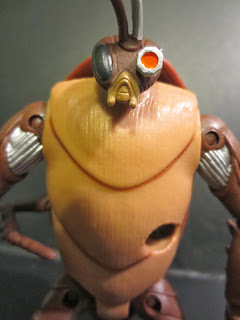 Ready for a shock? The paint work is quite good. Typically the paint work has been very weak on many of the new TMNT figures but Cockroach Terminator has a pretty fine paint job.  He's mostly molded in brown plastic but all of his little robotic pieces are painted a nice metallic silver and he even has some nice highlighting on his chest. Maybe it isn't much compared to high end collector's figures, but for a mass market toy under $10, it's pretty snazzy. I like this guy a lot. 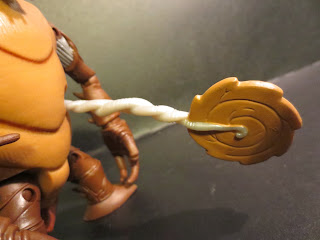 Here's comes one of my favorite parts of the figure, but also one of the parts that drives me crazy: the pop out saw blade. Yes, while his antennae come as a separate piece that snaps on (not really an accessory), Cockroach Terminator also comes with a really cool saw blade on an appendage that pops out of his chest. The saw blade is attached to a plastic cable that slides through the hole on the left side of his chest which can be extended in and out. I love the idea of it and the execution is fantastic, except for the paint. The cord is silver (perfectly fine) but the blade is almost tan. It doesn't make a lot of sense and really, really looks weird. Maybe this is entirely accurate to the character's in the cartoon, but I can't see making a saw blade look like anything but metal. That doesn't negate this being fun, though. Seriously, saw blades are a blast! 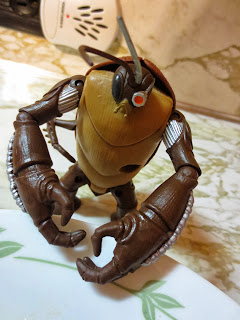 While I love the new TMNT line, I haven't given too much praise to most of the figures except for the regular and Stealth versions of the turtles. Cockroach Terminator, however, gets high marks in my book. Excellent design, some useful articulation, a fun accessory/ gimmick, and solid paint. I'd easily give this guy a Great! He's one of the highlights of the new TMNT line thus far, especially in terms of villains. Now if only I can get around to reviewing those Mousers....


I've reviewed tons of Turtles, including:


If you're wanting to get into this line, check out this huge set of figures in stock at BBTS: 24 figures for $219.99, which makes them just a little over $9 each- that's cheaper than retail!