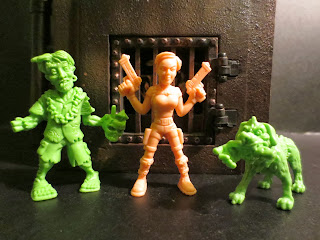 I had high hopes that Jakks Pacific's S.L.U.G. Zombies would stick around for quite sometime, but everywhere I go I see them being put on clearance. With no new product appearing for quite sometime, I fear that the line is dead. I've said plenty about these cool new minifigures in the past so I'll try to get right into looking at these guys. Coming in around 2 inches tall, the S.L.U.G. Zombies come in two flavors: solid green plastic for the zombies themselves and a light pinkish for the human zombie hunters. In each series that was released the figures were sold in 4 different packs of three or a "coffin" set of 12 figures. They're a wonderful homage to the classic minifigures (M.U.S.C.L.E., Monster in my Pocket) of the 80's and early 90's and I love them dearly. Zombies absolutely have a place in our 31 Days of Toy Terror, so here we go!


The Facts: Because of the nature of these figures, I'm structuring this review a little differently by looking at each figure individually and then giving the positives and negatives of the line.

And now, the figures: 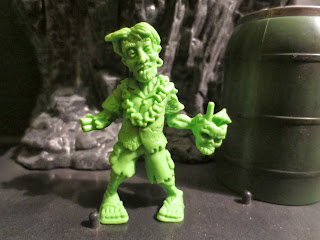 Gangrene Gene: Decked out in a tropical shirt, a lei, and carrying a mixed drink (served in a skull) in his left hand, you just know this guy has been listening to some Jimmy Buffett. Gene is trying to take it easy and doesn't even seem to concerned that his right hand is missing. Where did it go? Let's find out! 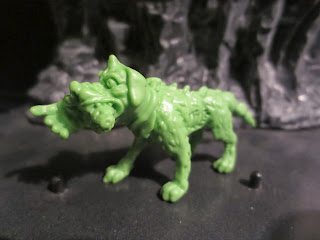 Ferocious Frankie: Oh, Gene's pet dog Frankie has his hand. Frankie is your standard zombie dog. She's big, she's mean, and she's carrying a human hand. I love that we got a zombie animal in this set! 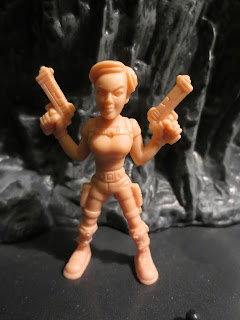 Johnson: A human zombie hunter, Johnson looks like the spitting image of video game superstar Lara Croft. She wearing a backpack, shorts, and carrying two large pistols. She looks tough and ready to take on some zombies.

*The sculpting on these figures is fantastic. These guys are loaded with very crisp, defined details. Some of the detail and texture work is as nice or nicer than on figures twice the size of the S.L.U.G.s.

*95% of these guys stand up really well. Even with their bent zombie legs, these guys are easy to stand up, always an important aspect of any minifigure.

*I love the wacky, almost subversive humor of these toys. Many of the human characters and zombies are parodies of various celebrities, historical figures, or tv and film characters.

*Each set comes with a "Zombie Guide" which shows all of the figures in the series as well as including fun facts about the various characters.

*My only negative thought about these these toys was not with the toys themselves, but with how Jakks released them. While these were (fortunately) not blind bagged, but released as actual sets, they were released in such a way that if you wanted a complete series you had to end up with duplicates. Each series included 16 figures. Typically those figures were divided up between four 3-packs and a 12 pack coffin. The series 4 coffin included four exclusive figures while each of the 3-packs included one exclusive figure. To complete series 4, you ended up with quite a few duplicates. Not a huge deal, as multiples of most zombies are OK, but still a little annoying, especially when unique humans were the duplicates. 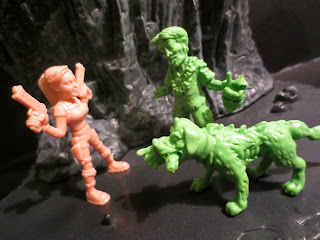 Overall: I have said it quite a few times, but these figures are so much fun! They're just fun, creepy little guys that kids or collectors should have had a blast with. Retailing for about $4, they were some of the greatest minifigures ever made. There was a fifth and sixth series planned, so here's hoping they someday see the light of day.