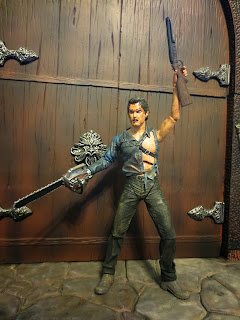 NECA has done an exceptional job with all of the Evil Dead figures they have released so far, but perhaps the crown jewel of the line was this excellent rendition of Ash as he appears near the end of Evil Dead 2: ripped clothes, chainsaw for a hand, covered in blood, and wielding a sawed off shotgun! While this Ash is clearly from Evil Dead 2: Dead by Dawn, he also looks pretty similar to his appearance in Army of Darkness as well (although the sculpt clearly resembles a younger Bruce Campbell). Are you ready for a quick look at an excellent version of Ash? Then come get some: 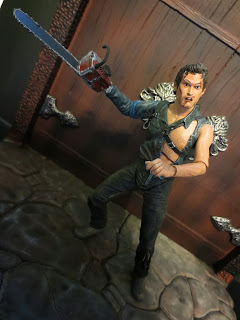 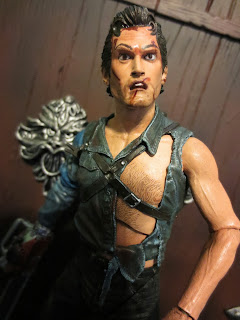 *Neca's sculpting work here is fantastic. The ripped and worn outfit, the musculature of Ash, and the head sculpt are all exceptional. So happy to have this guy on my shelf!

*The accessories have been so well thought out on these figures and this Ash is no exception. While the chainsaw doesn't seem to be removable, it looks perfect on Ash's wrist. Furthermore the shotgun (with a wood grain pattern) and the laughing mounted deer head are all amazing.

* Little details like the hair on Ash's chest, the various belts and buckles holding on the holster for the shotgun, and the details on Ash's shoes are excellent. Lots of attention to detail on this guy. 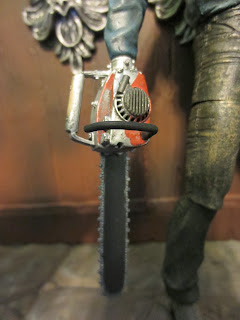 *While Ash has lots of articulation, his leg articulation isn't particularly useful because of the decision to give him swivel hips and a v-crotch. The ankles and knees help to get him standing correctly, but he really can't take many different poses because of the hip joints. 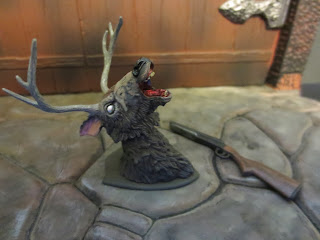 *I love the deer head, but it would have been tremedously improved if it had some kind of hole or bracket to hang it with. As it is, you'll have to use tape, glue, or stick tack to mount it. 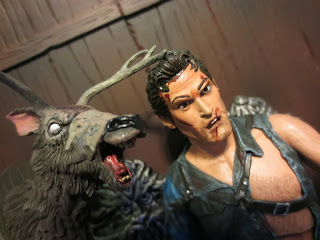 Overall: NECA has produced some great Evil Dead figures (remember the cool S-mart Ash from Cult Classics) but this Ash might just be the most iconic figure they've ever made. I do hope NECA someday gets around to releasing more figures (Ash's girlfriend in deadite form with the chainsaw would be killer!) but if this is the last Evil Dead figure ever released by NECA, they still are winners in my book. Great job!


While Ash is long sold out at Big Bad Toy Store, you can still get Henrietta, the deadite portrayed by Ted Raimi. You can snag her here!