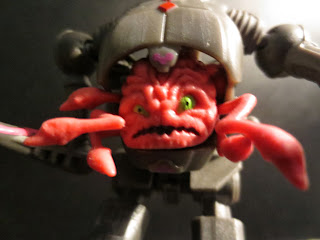 Every few years we get a new Teenage Mutant Ninja Turtles series or movie and, of course, that means a new toy line as well! Today I'm looking at Kraang. That's right, not Krang, the individual character from the original cartoon series, but Kraang, just one member of an alien race of brain people hanging out in robotic bodies. "What's going on?, you might ask. Let me tell you: It seems that for the new cartoon series, the writers have combined the Krang from the 1987 animated series and the Utroms from the original mid 80's TMNT comic books. Seems like a neat idea and so far these guys have been pretty interesting in the series (I'd love to see a suited Kraang figure released). How is this figure and why is it part of 31 Days of Toy Terror? Well, it's a creepy brain in a robotic stomach. Surely that's someone's nightmare, right? 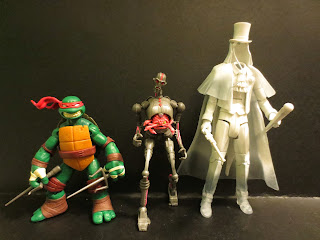 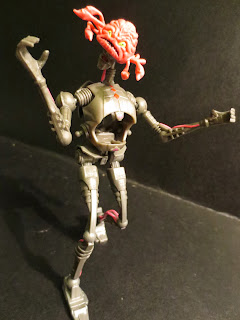 *Sometimes a figure just wins you over because of appearance and concept, and in this case the Kraang does. A well armed robotic body with an evil looking pink brain in the stomach certainly should appeal to kids, as I think it's just a fabulous looking figure.

*The Kraang alien is removable! Not only is he removable, but he's actually rubbery and squishy like a real brain (I imagine). His facial expression is priceless and he really does resemble the Krang from the '87 series. His tentacles have been reported as being a little fragile but I've had no problems so far. Besides, a removable brain is still a really cool feature. 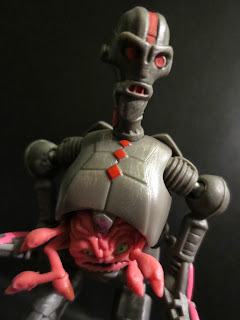 *I like the details on this figure. For a mass market release aimed more at kids than collectors, the robotic body is pretty detailed. There's even some "dry brushing" on the chest if you look closely. 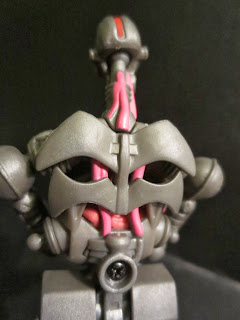 *My biggest negative is with the robotic body's legs. Not does the robot only have swivel hips, but he has no other articulation. No knees. No ankles. Nothing. This wouldn't be atrocious but for that fact that Playmates has chosen to give the Kraang robot a "battle pose" his legs are pre-posed at the knees and his left foot is pre-posed at a 45 degree angle. You're only going to get one pose out of this guy and it is a hard one to keep him stand in. 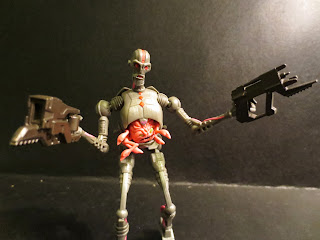 *The robot's left hand doesn't hold a very tight grip on the guns. You'll get one in there, but it's going to fall out pretty quickly. 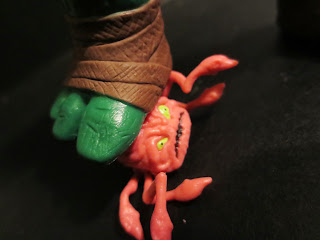 Overall: I probably could be a lot harder on this figure, but the concept is so incredibly cool that I'm really happy with the figure. As I keep reminding myself everytime I review a TMNT figure, this is a mass market toy marketed towards kids rather than adult collectors. I find myself more and more impressed with what Playmates is putting out. So many mass market lines these days are junk, but Playmates has seemed to really put a lot of hard work into the TMNT stuff. I think everyone wins in that situation.

I've reviewed a ton of the new TMNT figures, including:

If you're wanting to get into this line, check out this huge set of figures in stock at BBTS: 24 figures for $219.99, which makes them just a little over $9 each- that's cheaper than retail!