31 Days of Toy Terror: Lord Dactus from Masters of the Universe Classics by Mattel 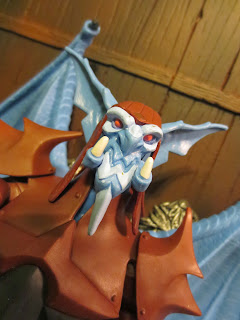 Another bat-like warrior in Masters of the Universe Classics? Yup, but this time it's a hero: Lord Dactus (formerly Lord Dactys). Lord Dactus was the leader of the Speleans, a race from Subternia in the Mike Young Productions He-Man and the Masters of the Universe series. It's been awhile since this line has seen a character originating in the 200x series so it's nice to see this faction represented again. Lord Dactus has been a long requested and oft-rumored figure so it's nice to finally get him. While he arrived at the same time as Mantenna, Lord Dactus is actually the October figure for Club Eternia (Mantenna is technically September's figure). Even though he's heroic, he's still kind of creepy, so I feel justified in putting him into our 31 Days of Toy Terror. ready to check him out? Then join me after the break... 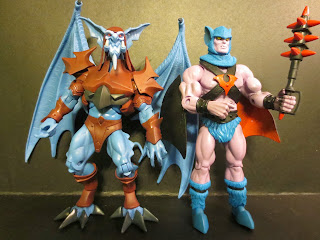 Lord Dactus is about 7 3/4 inches tall. While most of the MOTUC figures stay about the same height because of the shared body parts, Lord Dactus actually has a unique elongated neck and larger, bat-like feet which give him some extra height. While many of the body parts are reused, the head, feet, and hands definitely have a more anime influenced 200x look to them. I wouldn't go so far as to say that Lord Dactus looks out of place, but he definitely has his own style to him. Of course, we've never seen this character in any media other than the MYP cartoon, so how else could he be done? As it is, he looks like a unique, modern action figure. 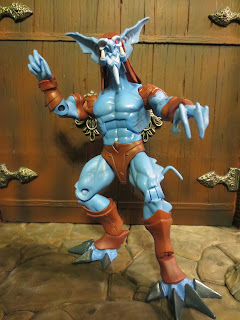 Lord Dactus features pretty standard MOTUC articulation, although he also has wings. Dactus features hinged ankles with minor lateral rockers, boot swivels, hinged knees, swivel thighs, ball jointed hips, swivel waist, a hinged abdomen, ball jointed shoulders, swivel biceps, hinged elbows, swivel wrists, a ball jointed neck, and ball jointed wings. All of the articulation on Dactus is excellent; great quality control, tight joints, and an excellent range of motion. The only issue I've had with the figure is that due to his wings he sometimes has a hard time standing up. The trick, I've learned, is that you have to bend the knees and ankles to give him a more hunched stance which helps to keep him up nice and solidly. 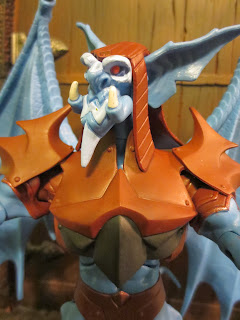 I love the sculpt. Love, love, love Lord Dactus. This guy is really fantastic. There are tons of really nice, new details like the armored shin guards, wrist guards, and bicep bracers. The head, though, is just amazing: great detail on the face sculpt. The wings are the same wings used on Draego-Man, but they work perfectly here too. The wings are actually attached to the chest armor, FYI. The chest armor is outstanding with sharp, angular details. He's definitely one of the most unique looking figures in MOTUC. 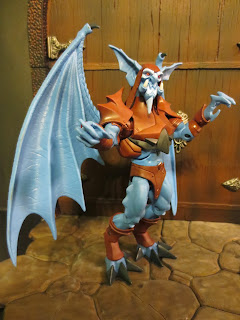 The paint work is neat, clean, and creates a fantastic looking figure. The blue of Dactus' skin really meshes nicely with the reddish brown armor. I love the armor as it not only has a great color scheme and design but features some cool little metallic details as well. There's some light shading on the wings as well as a shiny grayish black sheen on the various claws and nails. 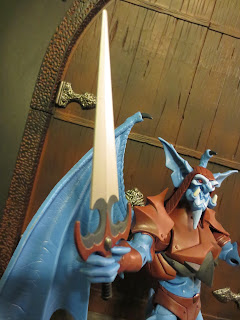 Dactus' armor and wings are removable so you could consider them accessories, although I see them as necessary for completing his look. As far as traditional accessories, Dactus comes with a really cool sword. It's a pretty standard blade with a very cool bat styled hilt. The sword itself uses four different paint colors to give it a really impressive design. This is easily one of my favorite weapons in the whole line; not only is it cool as heck but it also is a very solid weapon, neither brittle nor rubbery. 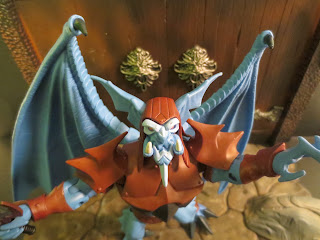 Lord Dactus is easily one of my favorite figures of the year. Great, unique sculpt, excellent paint work, fantastic articulation, and a really cool sword. While Dactus can be difficult to stand, with a little work he'll stand just fine. It's great to add another character to the roster of the people of Eternia from different races and tribes. Dactus is without a doubt a Great and a 1/2 figure that really feels like a new and unique figure rather than just a new head on the same old body.

If you missed out on Lord Dactus through Mattycollector, head on over to Big Bad Toy Store where you can preorder him today. Don't miss out on this guy! He's a stellar figure!