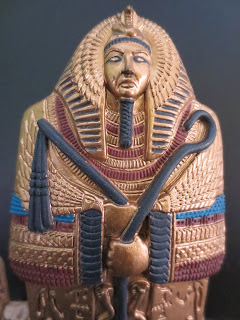 I've gushed about McFarlane's Monsters Playstets before when I reviewed the Werewolf set and I'm probably going to do so again here. These things were just fabulous and if Todd McFarlane ever wants to try his hand at returning to a non-licensed horror property, I think he'd be wise to reexamine these again. Blending together highly detailed (although smaller scaled) action figures) with a diorama like playset, these guys look fantastic on display, kind of like the old Aurora model kits. Today I'm going to be your ghoulish guide as I walk you through the horror that is the mummy's tomb from The Mummy Playset, one of the four series 2 sets. Released in 1998, for some reason I never owned any of these (I think I had gotten back into collecting vintage G.I. Joes and being a hardcore gamer at the time) so I was super excited to pick all of these back up a few years back and discover them anew! Ready for a jaunt through this creepy crypt? Then join me, if you dare.... 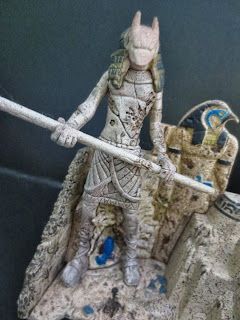 Our first point of interest is a statue of the jackal headed Egyptian deity Anubis. Tasked with overseeing the scales of judgment and deciding the fate of the soul in the afterlife, Anubis was associated with the afterlife itself as well as with mummification and embalming.  While parts parts of this statue show some structural damage (notice the cracking on the arms, right foot, and left torso), most of it is in good shape. Take note of details such as the highly detailed headdress and the ornamental staff. 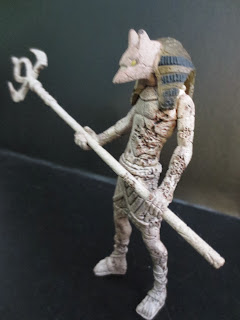 Oh my! It turns out that statue isn't just a statue; it's moving! Quick, hide and stand still until it passes! Notice how it swivels at the waist, shoulders, and neck. Wait, it's looking this way!   Shhh!..........


The glowing yellow eyes are slightly unusual for a statue, aren't they? The staff looks a bit more menacing, too! 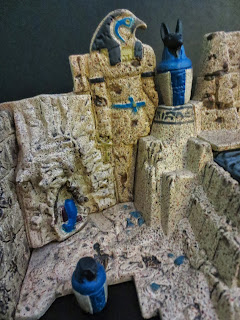 Let's be careful as I see a statue of what appears to be the bird headed Egyptian deity Horus, often associated with the sky, hunting, and war. Let me check something.... yes, this appears to only be a relief on the wall. I think we're safe. All around you you'll notice shards of broken pottery, hieroglyphics, and various detailed elements that have faded over time.

Look! A few of the jars appear to be intact! That larger jar up there, the one with the jackal headed sculpture of Duamutef on top, probably contains the stomach of this tomb's mummy. Ah! and this one down by our feet probably contains the intestines. Notice the falcon headed lid representing Qebehsenuef.

Well, let's head up these stairs, shall we? 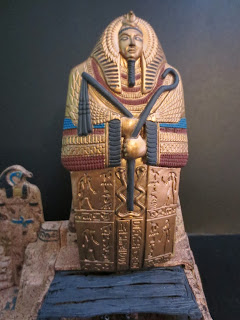 Ahh!! There it is! What an amazingly beautiful and well preserved sarcophagus! Excellent find, chap! Excellent find! Look how intricate the sculpting on the relief is. Just extraordinary, really. This will look fantastic in the British museum!


What's that? Well, as a matter of fact, I do hear something now that you mention it...


Let's open this up! Hurry! 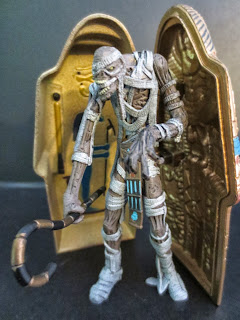 Wow! This ancient fellow is quite well preserved, wouldn't you agree. The amount of detail in his sarcophagus and on his loin cloth is staggering. Wait, is it....mmmoving?!

Oh my! Yes! It's hips are moving. And it's shoulders. It's head just turned! Quickly, quickly! Let's run to our helicopter outside! 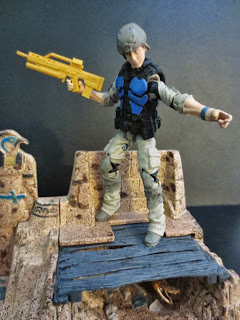 Be careful! That bit of old wooden floor you're running on doesn't look very safe! It's likely to give away at any moment. I see something moving down there, too!!! 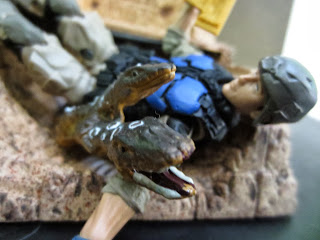 Oh know! Some sort of two-headed snake! This is highly unusual! I really do feel for you friend, but if you'll take a second and notice all the shards of bone down there, I imagine this creature is venomous and highly predatory. I'll let everyone know that you died in the field, with your boots on! Godspeed! 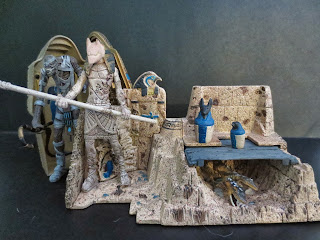 These Monsters Playsets were just so fun and unique. To get multiple figures and a small diorama with action features was quite thrilling! While it doesn't seem as large as most of the other sets, the level of detail, strength of the figures, and the inclusion of accessories like the canopic jars and sarcophagus are just extraordinary. McFarlane was definitely at one of their creative high points when these were released. I imagine that G.I. Joe fans (especially fans of the 1/18th scale Adventure Team figures from the G.I. Joe Collectors Club) would really find lots to use in dioramas and such. I'd easily give this set an Epic. It's not one I bought when it was released originally, but it's definitely stood the test of time!