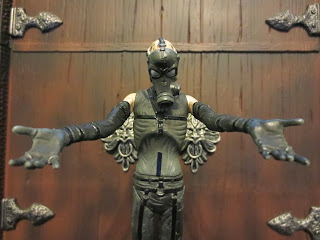 There was definitely a period of time when it seems like almost every major line anyone collected was made by McFarlane Toys. From 1999 until around 2001 McFarlane was releasing some of the best Spawn figures ever, Movie Maniacs were amazing everyone, and cool licensed lines like Sleepy Hollow, Austin Powers, and Metal Gear Solid were pretty much the epitome of what action figures could be during that period. Today's review is from one of those McFarlane lines, Metal Gear Solid, based off of the 1998 Playstation video game of the same name. It's Psycho Mantis, the psychic expert for the FOXHOUND unit. Psycho Mantis and his psychic powers made a huge impression on gamers in Metal Gear Solid as he would utilize his unique abilities to read your memory card and cause your controller to move on it's own (via the Dual Shock controller). Metal Gear Solid was the first video game based line from McFarlane Toys and was released in 1999. It featured eight figures, a "fish tank" two-pack of Meryl Silverburgh and Solid Snake, and translucent repaints of many of the characters. Today, though, we're just looking at Psycho Mantis as part of our 31 Days of Toy Terror. Are you prepared? Then "push the action button to drop down" and join me after the break... 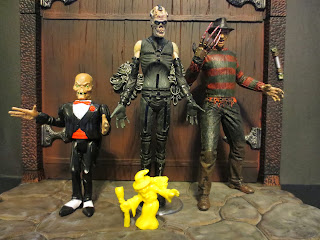 Psycho Mantis stands just a little over 6 1/5 inches tall. The figures are extremely well detailed and did a good job of translating the pixelated graphics of a Playstation One with the promotional and concept art of Metal Gear Solid. I've always displayed these guys along with my Spawn: The Movie toys and my Plan B Special Forces figures, as they all have a cool, tactical military vibe. 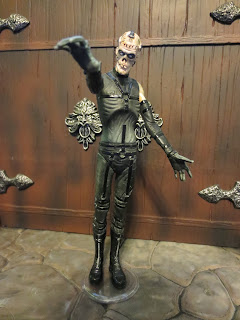 Some characters in the line features better articulation than others (Snake and Ninja had some great articulation) but all featured enough articulation to get them into some decent poses. Psycho Mantis features swivel hips (on a v-crotch), a swivel waist, swivel shoulders, swivel wrists, and a swivel neck. All the joints are still solid and tight (and this guy's now over 15 years old) and they give you enough motion in the upper body to put Psycho Mantis in come creepy poses. In the game he floats around with his arms outstretched, and that's what the articulation here allows you to do. He is tough to stand on his own, however, so you'll need to use a stand of some kind. 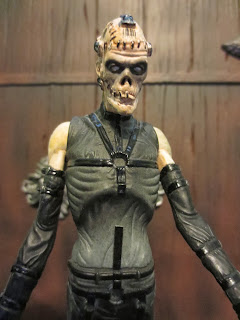 The sculpt is excellent. When these guys were released, they absolutely rocked. There's so much outrageous detail here, such as straps and buckles on Psycho Mantis' fetish gear inspired wardrobe. Check out his emaciated chest and stomach (you can see his ribs), the stitched details on his face, and the way that some of his straps are separate pieces that cross over his chest. You might notice that somewhere along the way that the strap across Psycho Mantis' lower torso snapped. I don't remember when this happened, so be careful with the figure. For all I know, this may have happened during one of the many moves I made between 1999 and the present. 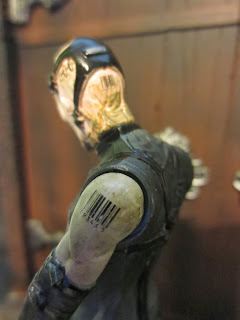 The paint's good too. While the figure looks like he just clad in black, there are actually multiple shades and styles of black. The various bondage straps and black leather boots are a very glossy black while the main bodysuit is almost a grayish green.  The little silver rings and snaps on the harness pieces, as well as the zippers on the boots, help to give things a nice realism. The skin is a pale and creepy with dark, sunken in eyes that are milky white. Little serial numbers can also be found stamped on Psycho Mantis' head, neck, and shoulders. They're so precise, you can even read the numbers: 09343 5. 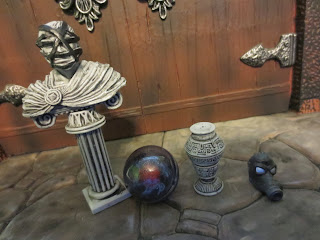 All of the Metal Gear Solid figures came with impressive accessories, and Psycho Mantis doesn't disappoint. He comes with a burst of psychic energy, a vase, a two-piece statue, and his trademark gas mask. The psychic energy burst is a clear plastic ball (about as big as a super ball) that has a sculpted burst of red and blue energy inside. If Psycho Mantis is attached to a stand, the ball can actually rest on one of his palms, although it will easily fall. When you encounter Psycho Mantis and fight him, he throws various items in the room at you using his telekinetic powers. One of those items is the vase, seen here. It's an awesome sculpt with lots of detail that's brought out with a good dark wash. The second item is the really cool statue. It looks like a historical statue (maybe Julius Caesar) but the face is wrapped with black bondage tape. It's really creepy and can break apart. Both of these items are great for decorating other scenes for your action figures. Lastly, there's the gas mask. It simply fits over Psycho Mantis face and stays on pretty well (it will fall off from time to time). And features silver lenses. It's a great compliment of character appropriate accessories for the figure! 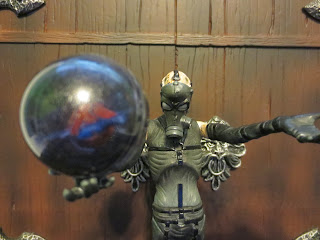 I like this guy and would easily give him a Great rating. When Metal Gear Solid was released, there was nothing else like it, and when McFarlane Toys released their Metal Gear Solid action figures, there was nothing else like them, either. I wish McFarlane had tried to get one more series of figures out including Otacon, Johnny Sasaki, and some more generic guards, but it was not to be. Psycho Mantis is truly a standout boss villain in video game history and whether you're into that or creepy pale thin guys in black S&M gear, you'll be happy to have him on your shelf.

While Big Bad Toy Store doesn't have Psycho Mantis in stock, they do have plenty of other cool Metal Gear Solid toys and collectibles for sale. Head over there and stock up today!