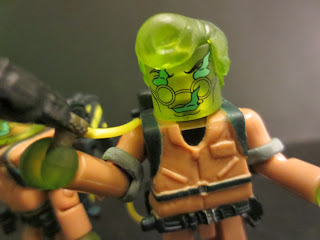 If you ask me what's the best Ghostbusters toyline of all time, I'm going to tell you it's Minimates Ghostbusters. Covering both films, the video game, and the animated series, Minimates managed to take their unique stylized minifigure body and create one of the best movie based lines ever. Is there any character not represented in the line? While the vintage The Real Ghostbusters line is a classic and remembered fondly by many, it just doesn't have many recognizable characters nor movie specific outfits. Mattel's Ghostbusters line was plagued by crazy problems such as a lack of ghosts, accessories, and significant characters; frankly it just wasn't thought out very well and seemed like a side effect of Mattel scooping up the rights in preparation for the oft rumored but probably never happening Ghostbusters 3.  Just get us an Ecto-1, Diamond, and I'll make you a crown myself as your Ghostbusters line is incredible and exactly what I need! Today I'm looking at a release from The Real Ghostbusters subset, the Spectral Ghostbusters. The Spectral Ghostbusters were evil doppelgangers of the Ghostbusters and appeared in the episode "Citizen Ghost." Ready for a look at some spooky evil Ghostbusters? Then join me after the break... 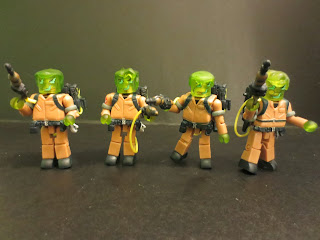 The average Minimate is a little under 2 1/4 inches tall and these guys are no exception. While minimates tend to have a blocky body, they have rounded feet, hands, and cylindrical heads. They're kind of built like a larger, more articulated Lego minifigure. While they share lots of parts with the film based Ghostbusters minimates, the exaggerated details on the sculpted hair and the face have a bit more of an animated look to them. The base bodies of these guys are all the same although their torso cover and hairpieces vary. 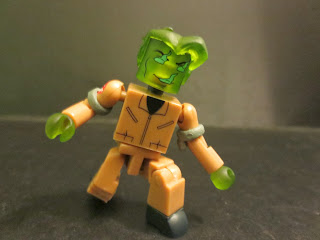 Minimates are pretty well articulated. Each of these guys includes swivel ankles, hinged knees, ball jointed hips, a swivel waist, ball jointed shoulders, hinged elbows, swivel wrists, and a ball jointed head. While not every join has a tremendous range of movement, you'll be impressed by some of the fun poses you can get these guys into while playing and displaying them. I didn't have any QC problems with mine. 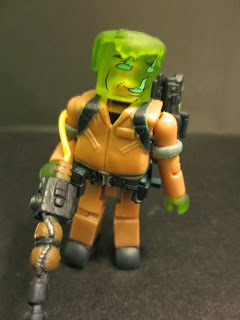 These guys are repaints of the previously released Minimates designed to look like the animated versions. The bodies are standard bodies with the character specific torso and hair pieces. The hair pieces are the biggest giveaway that these are based off of the animated series as Peter and Egon have the very caricatured hair styles based off of Bill Murray and Harold Ramis. The bodies are quite nicely detailed with little features like the walkie talkies on their belts and the various proton pack support straps.  Egon and Ray both have their own unique torsos due to their unique body types in the cartoon while Peter and Winston share the same torso. That already makes these guys more unique than Mattel's 'busters who all shared the same body! The Proton packs are permanently attached to the torso covers and the wands are removable, but attached to the pack via a very soft yellow cord. The cord feels slightly fragile, but so far I've had no trouble with it. Each pack has a plug so you can store the included ghost traps, a nice little feature. 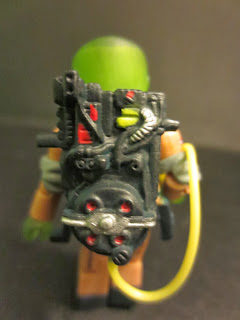 While the Ghostusters figures have a lot of nice sculpting on them, unlike some Minimates, the paint work is typically gives the characters their flare and this set is no exception. Remember, these are spectral beings that are evil doppelgangers of the Ghostbusters so while the faces look like the animated renditions of the fabulous four, they're also more evil and ghostly. First, I love the use of the translucent green plastic for the heads, hair pieces, and hands. This give them a great spectral look that meshes well with the faces. While the faces are simple line drawings, there's also some added green flames or energy trails that look as if they're being emitted from the mouths and eyes. The uniforms and packs are covered with painted details, each fgure has a crisp "no-ghosts" logo on their right shoulder, and underneath the torso piece you can find a simpler version of the flight suits in case you want a simpler version of the character that you can put in a vehicle or pose more easily. Let's hope an Ecto-1 comes out someday! 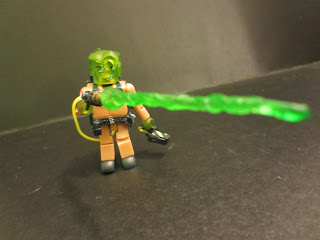 These guys come loaded with accessories. In addition to the proton packs (which are attached to the figures' torsos) each 'buster comes with an energy stream, elbow pads, and a ghost trap. The energy streams are green here (since the Spectral Ghostbusters used a more slime like energy beam) and can be attached to the end of the neutrino wand/ particle thrower. The ghost traps are really cool and can be stowed on the side of the proton pack. Ray also has a spot on his belt where you can attach a trap, if you wish. The elbow pads are certainly part of the uniform look, but they can easily be removed by sliding off the figures hands. Remember, too, that Minimates come apart easily and can be customized as you see fit, so arms, hairpieces, heads, and torso can be swapped with most other Minimates to create your own unique characters. 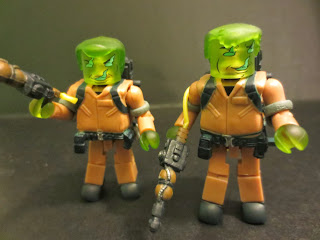 There has not been a pack of Ghostbusters Minimates that I've been disappointed in. I absolutely love this line and am always trying to fill in the few small gaps in my collection. They're really very accurate for such small figures, quite expansive, and tons of fun. This set is great because it gives you the best of both worlds: the creepy paint and translucent look of the ghost figures but the cool technology and interactivity of the Ghostbusters themselves. I'm giving this set a Great since it's simply a repaint of previous figures, but man what a repaint!

Looking to score this set? You'll probably have to check the secondary market now as it's been a while since it was released but there is still a slow trickle of new product being released. Check this out- it's a new set of the four main guys called the "I Love This Town" boxed set. These guys not only come with tons of new gear and swappable marshmallow covered pieces, but they also are the first Minimates Ghostbusters with removable proton packs. Could this possibly mean Diamond is planning on releasing a Minimates Ecto-1? Let's hope! You should probably head on over to Big Bad Toy Store and pre-order your set today while they still have them available!