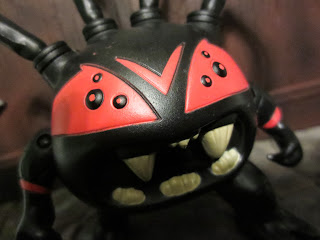 As I started watching through the new Nickelodeon TMNT series I was mentally making a list of characters from the show I wanted to see realized as action figures: Chris Bradford, suited Kraang members, Karai, and Spider Bytez were all on my list. I'm glad that Spider Bytez was selected as he's a fun looking and unique character. Since he's also a creepy spider, I thought he'd make an excellent addition to our 31 Days of Toy Terror here at ThEpic Review. As Michelangelo tells us in the cartoon, Spider Bytez is both a spider and he bites, hence the name. We'll leave the naming to Mikey since he's good at naming things and I'll jump into the reviewing. This is an...unusual figure. Read on and find out what I mean after the break... 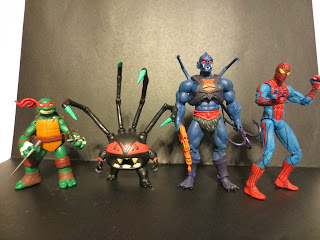 Spider Bytez is very unusually shaped compared to most TMNT figures. His body and head are only about 2 5/8 inches tall but factor in the legs on top of his head and he's more like 6 1/2 inches tall. The TMNT cartoon has a very stylized look to it and, for the most part, the toys have tried to capture that look. Spider Bytez looks quite a bit like his animated counterpart and should be instantly recognizable to most fans. If I didn't know the character, however, I would actually guess the toy was from another toyline like Pokemon or Ben 10. It just feels different. 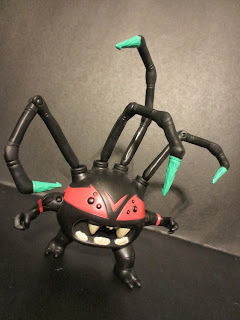 Spider Bytez has some decent articulation and some crummy articulation. He features peg/post ball jointed shoulders and four true ball jointed spider legs each with a hinge in the middle. Due to his unique body design, his actual legs and combination body/head are one solid hollow piece. The four spider legs come separate in the package and simply snap into the holes atop Spider Bytez's head and they provide some nice movement and posing options, but otherwise this guy is just a solid chunk of plastic. I'm not really sure what Playmates could have done, though, do to the weird nature of the character. The figure stands just fine on it's own which is always a plus. 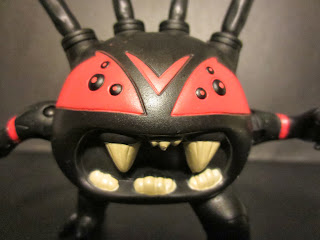 Let's do a compliment sandwich here as we talk about sculpt. I'll start with something positive, then give a critique of something negative, then back to a positive again. First, I'm very pleased with the fact that Playmates continually offers new, unique sculpts in the TMNT line. The willingness to do that makes unusual characters like Snake Weed, Spider Bytez, and Fish Face really stand out. The shape of this guy is unusual and unique. I don't, however, like how the mouth turned out. The teeth look OK but the mouth itself is awkward. I think the center (between the teeth) is OK, but the sides have no depth. They're simply flat. The figure's body does feature lots of little details and raised lines, however, that bring some depth to the sculpt and make it quite interesting. 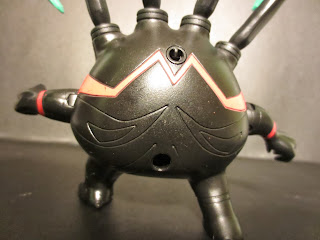 Paint is always a problem with TMNT figures. I like the color scheme itself, as the black body with red details and green claws looks great. The eyes are pretty messy, though, which is not good on a smooth, flat surface. There's also black paint showing through spots of red paint and spots of red paint that have dripped onto the black body. All of the details on Spider Bytez's body that should be red (his knees, the bands on his spider legs, and his shoulder bands) have been left unpainted. So disappointing! 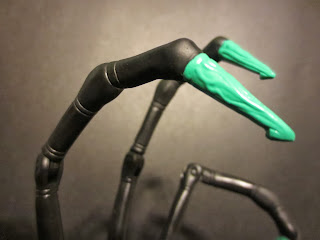 The only accessories that come with Spider Bytez are his spider legs which plug into his body. I don't consider them accessories, so Spider Bytez gets nothing to play with. A can of Ooze? A web? Even a sword or something? Nope, nothing. Remember back when every TMNT figure came with loads of cool stuff? Yup- nostalgia! 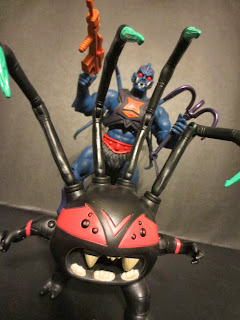 I respect what Playmates tried to do here by offering a cool character in a really unique way. Unfortunately, the execution just faltered. I'm giving Spider Bytez an Eh and a 1/2. Unless you're really a completist on this line, love the character or spiders in general, or are buying this for a kid who may not care about some of the issues I mentioned, I can't recommend this. Some fans have stated that it feels like a Happy Meal toy and while that's usually an exaggerated criticism that is thrown out against toys someone doesn't like, I actually think it fits here. I know it probably seems like I've been overly critical of the TMNT line, but just look at the Turtles themselves, the Stealth Tech Turtles, and characters like Fish Face and Snake Weed. Playmates can do some awesome things with this line, so it's harder to overlook missteps.

Here are some other TMNT figures I've reviewed here on
The Epic Review:

If you're wanting to get into this line, check out this huge set of figures in stock at BBTS: 24 figures for $219.99, which makes them just a little over $9 each- that's cheaper than retail!