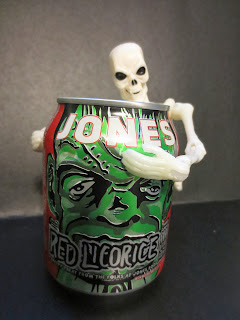 One of my favorite parts of any holiday, whether it's Halloween, Christmas, Thanksgiving, or even Valentine's Day, is seeing what crazy soda flavors Jones Soda comes out with. Remember the news stories you've heard about a Turkey and Gravy flavored soda?  Yup, that's Jones Soda. While some of those gag flavors will literally make you gag, others turned out pretty good. Some of my favorites from the past have been the Cranberry soda from Thanksgiving 2004, Scary Berry Lemonade (released later as Berried Alive), Pumpkin Pie, Sugar Plum Soda, Love Potion #6 from Valentine's Day 2006, Lemon Drop Dead, and my all time favorite, Black Cat Licorice.  Well, this isn't Black Cat Licorice, but "Night of Red Licorice". I was fortunate to gather together myself and my fellow Epic Reviewers Arathaelia and Generbeener, and a special guest reviewed codenamed "Bride of Chucky." So, ready to read about red licorice flavored soda? Then join me after the break.... 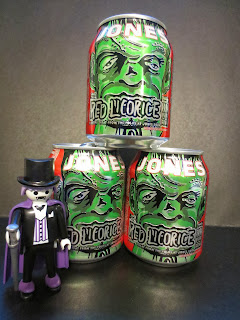 First, let me say just how much I like the cans. This one features a pretty cool representation of Frankenstein's Monster against a red background. He's got lots of stitches, scars, and even bolts protruding from the sides of his neck. I think these might be exclusive to Target. That's where I bought them (actually Mom-ecue17 and Dad-ecue17 bought these for me- I went and bought some other flavors myself). They come in a four pack and are held together by one of those clear plastic can holders that Captain Planet always told you to cut apart so that birds and fish don't get stuck in them. I know I still always do.


So, let's take a look at the soda. It's really nice and red, not unlike a standard cherry soda or something like Faygo Red Pop.
Here's the initial taste opinions of our reviewers:
*Arathaelia thought it not only looked like Red Pop but that it tasted like it as well, although it was less carbonated. I think she used the word flat.
*Bride of Chucky initially said that the soda smelled like cough medicine. She didn't seem real pleased with it either and said she could taste a licorice like taste that she didn't like. She eats a lot of Twizzlers, but didn't like this soda.
*I honestly don't even remember what Generbeener said. I seem to feel like she probably made a face, but that's as much as I recall.

Now me? I really like this stuff. First of all, I'm a big fan of black licorice but I also like red licorice and this stuff tastes quite a bit like red licorice. Not Twizzlers per say, more like Red Vines. It's sweet, but there's something just a bit tangy to it as well. It's got a ......red flavor. Not cherry, or strawberry, but red. Does that make sense? Anyways, it's sweet, then a little sour with a distinctively red taste. See, now you know exactly what you're getting into! 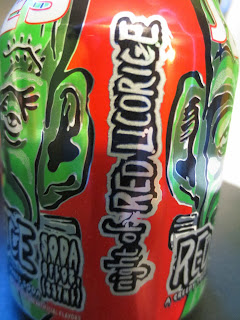 I particularly like the name of this soda; it's not just Red Licorice, it's Night of Red Licorice. That makes it just a bit more eerie in my opinion. If I were rating this on a scale that was based on various Halloween costumes I might wear to a party, I think it would be something really inconvenient like a big boxy robot costume or one of those two person horse costumes. I'd love to walk into the party with that costume, show off a bit, but then switch to something else. This is a fun novel soda and I'll drink all four cans, but I'm not going to stockpile it like I did the Black Licorice soda. Still, every now and then I'd probably want one of these, probably while watching either Trick 'r Treat or or Hansel & Gretel: Witch Hunters.