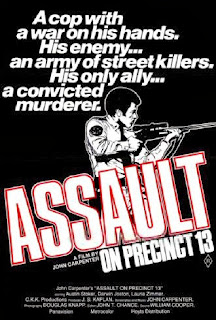 Assault on Precinct 13 is the second film directed by John Carpenter and was also written, edited, and scored by him. It's an extremely simple story that starts off slow but builds throughout until the anxious tension explodes. Lieutenant Ethan Bishop (Austin Stoker) is tasked with supervising the Anderson police precinct during the final hours before it is closed down permanently.  The little station and it's meager staff soon get a surprise visit from a prison transport that needs to acquire medical attention for a seriously ill inmate. One of the prisoners being transported turns out to be an infamous Napoleon Wilson (Darwin Joston), a likable, convicted murderer on his way to death row. More after the break...


While the inhabitants of the Anderson precinct work to resolve the mini crisis they've found themselves in, another crisis is brewing outside of their doors: a gathering of the warlords from a gang called Street Thunder have declared a "Cholo" against the Los Angeles Police Department and the citizens of the city due to a recent police raid that led to the deaths of multiple gang members. When a random attack on an ice cream truck leads to the death of his daughter, a man named Lawson (Martin West) takes revenge upon the gang and then runs to seek refuge in the Anderson precinct. Now, trapped inside with only a skeleton crew of a staff and a convicted death row inmate, Lt. Bishop has to fend off wave after wave of Street Thunder gang members in order to survive.
What to say about this film? First the pacing is magnificent. It starts off slow, and thus you're completely shocked when the action starts. I'm not going to worry too much about spoilers since the movie is almost forty years old, so I'll talk openly about one of the movie's most shocking and striking moments: the shooting of Lawson's daughter. There are certain things that just don't happen in movies, and watching a child get shot down by a street gang while eating an ice cream cone is one of them. It's a horrific scene that happens so quickly that you're just shocked by the brutality of it. It not only sets the tone for the rest of the film, but it helps to characterize Street Thunder, not as a group of individuals, but as a collective swarm of evil. Unlike most movie gangs (other than the Warriors), Street Thunder is not made up all of one race or age, but seems to be an almost supernatural gathering of the city's most depraved and violent inhabitants. The way the gang moves and swarms is more reminiscent of a group of zombies than the way gang members are typically depicted in 1970s and 1980s cinema (I'm thinking Death Wish III).
Actually, there are lots of elements of this movie that remind me of George Romero's Night of the Living Dead. First, they share the premise of a group of disparate individuals trapped in a location and facing an unexplainable, menacing horde. Early on in the film, as Lt. Bishop is getting in his patrol car, there's even a brief clip overheard on the radio that speaks about mysterious phenomena occurring. It's not too dissimilar to the radio and news reports heard in Night of the Living Dead. Second, I don't think it's a coincidence that Lt. Bishop is an African American man , similar to Duane Jones' Ben. At the time of both films, it certainly would have not been the norm for films to portray a black male as an authority figure and the voice of reason, so perhaps both directors were ultimately saying something about recognizing our common humanity despite racial and ethnic boundaries when confronted by a truly inhuman adversary. Third, both pictures have a panicked and catatonic character who largely instigates the conflict--both Judith O'Dea's Barbara and Martin West's Lawson lead a violent horde to a trapped band of survivors--and then largely do nothing while they are protected by other characters. Their safety becomes the responsibility of others, and thus they function as the catalyst, not just for the film's conflict, but also in igniting the moral compasses of the protagonist(s) in how they decide to protect an unknown stranger.
While I view myself as an optimistic person who cherishes the virtue of hope, I do find that I appreciate the bleak outlook that remains at the end of many of Carpenter's films, even after the protagonists have survived. One of the most enjoyable aspects of Assault on Precinct 13 is the relationship that develops between Lt. Bishop, convicted murderer Napoleon Wilson, and police secretary Leigh (Laurie Zimmer). While the audience never really learns what Napoleon Wilson has done to warrant the death penalty, we might find that we develop a respect for the character, even finding him likable and charming. Bishop develops the same respect, and we see the beginning of a friendship develop between himself and Wilson, as well as hints of a romance with Leigh. And then, at the end, we realize that despite everything that's transpired and the heroism that Wilson has displayed, he'll still be back on his way to death row. There's something fatalistic about many of Carpenter's films, a theme that certainly is front and center in his Apocalypse Trilogy (The Thing, Prince of Darkness, and In The Mouth of Darkness).
This really is a great, well made film that is an excellent introduction to Carpenter's unique style. It also has an excellent Carpenter scored soundtrack that seals the deal. I'm giving it a Great, as it certainly sits on the upper echelon of 1970's cult cinema. The film was remade in 2005 by director Jean-Francois Richet with Ethan Hawke and Laurence Fishburne starring. It's a decent movie, but the original is a much better and more significant film.