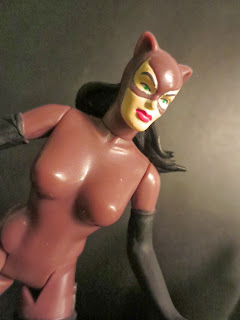 I'm almost through reviewing a huge lot of Legends of Batman toys I picked up over the summer from a seller, but I've still got a few good ones left. Right now, however, I'm reviewing a figure that I've owned for quite a few years: the Legends of Batman Catwoman. Based on the Catwoman from the early to mid 1990's as drawn by Jim Balent, I think this was easily one of the best figures in Kenner's Legends of Batman line and as a kid it quickly replaced my Batman Returns Catwoman figure (the figure only, however, as no one will ever replace Michelle Pfeiffer as Catwoman). Ready to get clawed? Then join me after the break... 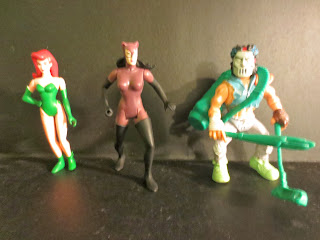 While bigger and more extreme was the order of the day for Legends of Batman, Catwoman comes off as looking quite a bit like her comic book counterpart (although with smaller breasts, as a Catwoman figure with Balent-sized breasts wouldn't be able to stand up without a walker). She stands about 4 3/4 inches tall and fits in with most of the mid-late 90's Batman movie lines or DC lines like Total Justice. 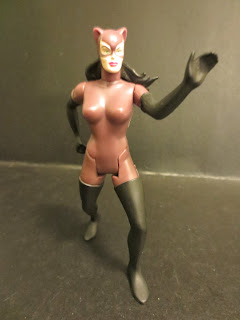 She's sculpted in a bit pretty mild battle stance, almost as if she's taking a stroll or getting ready to swing her whip. She's only sculpted at the Kenner 5 (swivel hips, swivel shoulders, and a swivel neck) but that was about all that we had back then articulation wise. She is hard to stand up, but it's because of the way her legs are positioned; her right foot is curved so that she's walking on her toes. 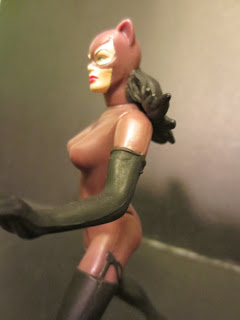 The sculpt is pretty simple- Catwoman's a lady with a nice figure (not overly skinny) in a skin tight suit. She's also got the necessary accoutrements such as thigh high leather boots, arm length leather gloves, and a hood with some cat ears on top. The face sculpt is pretty nice considering this was released with the first series of figures from 1994 (she's much better looking than any of the Princess Leia or Poison Ivy figures Hasbro would release in the mid-late 1990's) and features the flowing long black hair that erupted from the back of her hood. Ms. Kyle is looking fine, let me tell you, and there's one other cool thing- check out the cuff of her left boot: there's the handle of a riding crop poking out. Kinky! 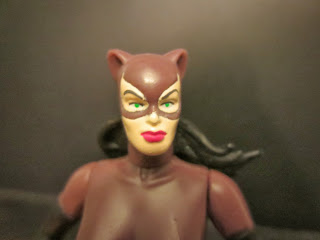 The paint's basic, but it works. Selina's mostly molded in the purple of her jumpsuit with details painted on. The face is really neat and clean with bright green eyes and ruby red lips. The previously mentioned riding crop handle is also painted, a pretty cool little detail that even some modern companies would neglect to paint (I'm looking at you, Playmates!). There's nothing groundbreaking here, but the work is solid and gives makes the character look like her comic counterpart without looking too bright or gaudy. 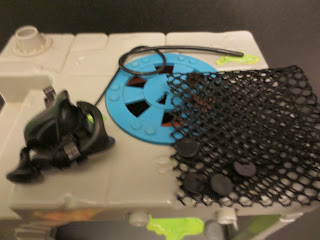 Ready for one of the best parts of the figure? The accessories! While most Legends of Batman figures had crazy projectile firing monstrosities, Catwoman comes with three really cool and functional character specific accessories. She also comes with the obligatory trading card, although that's more of an accessory for you, not Selina. First, she comes with a whip. It fits nicely in her right hand and is made of a sturdy, rubbery material that actually lets it swing around. It's a super cool accessory and something no Catwoman figure should be sold without. Second is her capture net. This is a real freaking net with four plastic discs on the sides to make it heavier. It makes sense for Catwoman to use when capturing her foes or for Evil Betty to use when trying to capture the Chosen One. Last, but not least, is her grappling hook backpack. It's a small pack this its on Catwoman's waist and features a string running through it that's attached to a grappling hook. There's even a clasp to hold the grappling hook on the backpack when it's not in use. It doesn't actually allow her to climb like the vintage Masters of the Universe Webstor did; it's simply a string through a hole. Still fun, though. 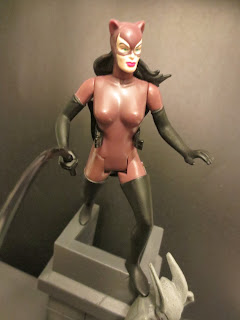 I'm really, really blinded by nostalgia with this figure as I love her. This certainly isn't my favorite design for Catwoman ever, but I've just always felt this was one of the best Catwoman figures released in the 90's and one of the best figures released in Legends of Batman. A great comic accurate likeness, solid sculpt and paint work, and really fun accessories all combine to make this a little gem that you'll want to get your hands on. She can be had for cheap (no Batman: Year One jokes please) since everyone bought her up in the 90's to resell her for big bucks and now they'll part with her just to save space. That's an interesting trend I've noticed with the Batman lines of the 90's: all the villains the scalpers and investors bought up are easy to obtain and can be had for cheap while the standard Batman figures are harder to find and typically a bit more costly. Weird, huh? Anyways, I'm rating Catwoman here as Epic. I'm always loved this figure and still believe it's a great Catwoman toy. Meow!

While you probably won't find this figure, Big Bad Toy Store has plenty of Catwoman merchandise, from statues to action figures to key chains. Check them out!