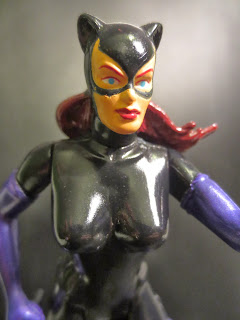 Wait, didn't I just review this figure yesterday? Well, kind of but not really. The Catwoman I reviewed was a regularly released figure that was part of the first series of Kenner's Legends of Batman line in 1994. A few years later after that line ended Kenner made a few exclusive repaints available to collectors through Warner Bros. Studio Stores, a chain of stores selling Warner Brothers merchandise (similar to Disney Stores) that all closed in 2001. The packaging was different and featured a large image of Batman against a purple background. The defining title on the package was "Batman" with "Special Legends Edition" written above in smaller text so I'm choosing to list these as a separate line. The figures were essentially just repaints of previously released figures but since I've always had a fondness for this Catwoman figure I decided to pick this one up as well. Since the figure is simply a repaint, I'm going to reuse a good bit of material from yesterday's review. Deal with it. When you're ready, the review of Ms. Kyle is after the break.... 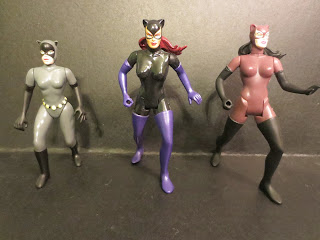 While bigger and more extreme was the order of the day for the Legends of Batman line this sculpt first appeared in, Catwoman here comes off as looking quite a bit like her comic book counterpart from the Knightfall era (although with smaller breasts, as a Catwoman figure with Jim Balent-sized breasts wouldn't be able to stand up without a walker). She stands about 4 3/4 inches tall and fits in with most of the mid-late 90's Batman movie lines or DC lines like Total Justice. 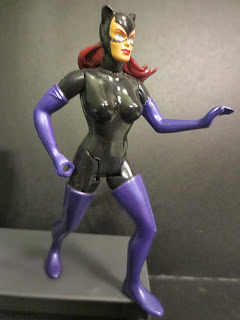 She's sculpted in a bit pretty mild battle stance, almost as if she's taking a stroll or getting ready to swing her whip. She's only sculpted at the Kenner 5 (swivel hips, swivel shoulders, and a swivel neck) but that was about all that we had back then articulation wise. She is hard to stand up, but it's because of the way her legs are positioned; her right foot is curved so that she's walking on her toes. She can be a bit difficult to stand up, though, so be patient or use a stand. 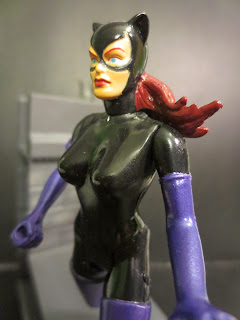 The sculpt is pretty simple- Catwoman's a lady with a nice figure (not overly skinny) in a skin tight suit. She's also got the necessary accoutrements such as thigh high leather boots, arm length leather gloves, and a hood with some cat ears on top. The face sculpt is pretty nice considering this was originally released with the first series of Legends of Batman figures from 1994 (she's much better looking than any of the Princess Leia or Poison Ivy figures Hasbro would release in the mid-late 1990's) and features the flowing long hair that erupted from the back of her hood. Ms. Kyle is looking fine, let me tell you, and there's one other cool thing- check out the cuff of her left boot: there's the handle of a riding crop poking out. Kinky! 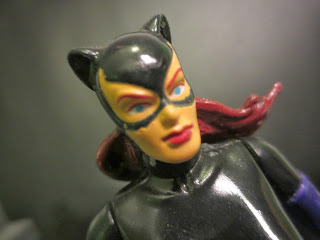 The paint is the only thing that differentiates this figure from the original release. It's actually shinier and stands out more than the original figure, but it does have a few minor issues. Let me say, though, that I love the glossy black body suit and the glossy purple gloves and boots. It makes it look like Catwoman is wearing some kind of a pleather or latex outfit. The face isn't bad, either, and is neat and clean with bright blue eyes and crimson lips. The previously mentioned riding crop handle is not painted, however, unlike the original figure. There's also the issue that Catwoman's hair is red, something that I can't recall as ever being a Catwoman trait except if she's been in disguise or perhaps in an Elseworlds story. It looks good, but it's not definitively Catwoman. I'm actually surprised Kenner never tried to turn any of this sculpt into a Batgirl figure. 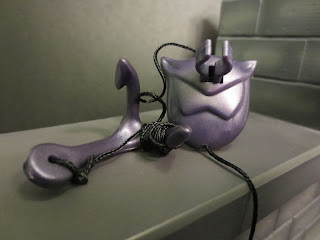 Ready for one of the best parts of the figure? The accessories! While most Legends of Batman figures had crazy projectile firing monstrosities, Catwoman came with three really cool and functional character specific accessories, all of which this figure included too. First, is the whip. It fits nicely in her right hand and is made of a sturdy, rubbery material that actually lets it swing around. It's a super cool accessory and something no Catwoman figure should be sold without. Second is her capture net. This is a real freaking net with four plastic discs on the sides to make it heavier. It makes sense for Catwoman to use when capturing her foes or for Evil Betty to use when trying to capture the Chosen One. Last, but not least, is her grappling hook backpack. It's a small pack this its on Catwoman's waist and features a string running through it that's attached to a grappling hook. There's even a clasp to hold the grappling hook on the backpack when it's not in use. It doesn't actually allow her to climb like the vintage Masters of the Universe Webstor did; it's simply a string through a hole. Still fun, though. This version is molded in a metallic purple plastic that looks kind of cool. 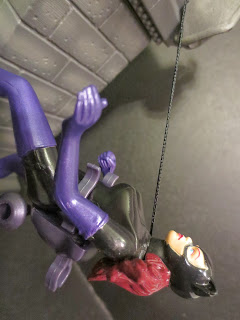 While I loved the original figure, I think I might love this one a bit more. While the red hair is inaccurate, it looks nice when paired with the shiny, metallic outfit. The only real complaint I have is that the crop in her boot isn't painted, something the original figure nailed. Of course, considering this figure came out around three years later, it wouldn't have been as impressive at the time and thus garners a lower rating than the original figure. In 1997, I think this would have been a Great figure and not an Epic like the original was in 1994. For collectors scooping up all of the Legends of Batman figures, the Warner Brothers Studios Store exclusive Batman: Special Legends Edition line offers up a whole new vein of figures to collect. They're a bit more rare, but don't seem to be insanely expensive, so start tracking them down if you're interested.

While you probably won't find this figure there, Big Bad Toy Store has plenty of other Catwoman merchandise, from statues to action figures to key chains. Check them out!