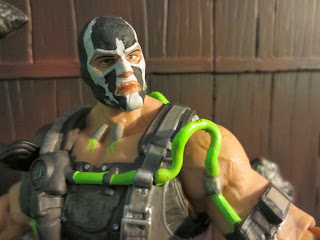 I was simultaneously shocked and impressed when my Arkham Origins Bane arrived from Big Bad Toy Store- not only was he larger than the other figures in the line and packaged in a nice window box, but he also was sold at the same price point. Remember how DC Collectibles charged around 2 1/2 times as much for the Arkham City Mr. Freeze as they did for a basic figure even though he wasn't much larger than one? Well, it seems that DC Collectibles is really making a turn around. QC seems to be improving, character selection is fantastic, and while Mattel's 6 inch DC offerings seem to be winding down, the future seems really exciting for DC Collectibles. While Bane is a character that has received quite a few action figures in the past, this is a new look for him in the Arkham-verse. While the Arkham Asylum and Arkham City Bane represented a very roided out and mentally impaired version of Bane, the Arkham Origins version represents Bane as the brilliant and cunning criminal mastermind that terrorized Gotham and broke Batman in Knightfall and The Dark Knight Rises. It's a neat figure that's plagued by a few unfortunate problems. Ready for a look at one of the eight assassins hired by Black Mask to kill Batman? Then join me after the break? 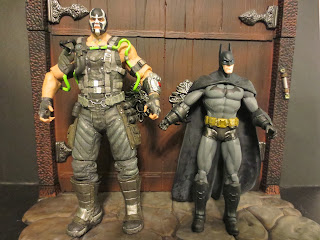 Bane stands at 8 1/4 inches tall and looks appropriately menacing next to your Arkham Batman figures. His design is right out of the video game and thus means that he'll fit in perfectly with his predecessors, although he'd look fine next to most DC Direct/ DC Collectibles Batman figures as well. As mentioned above, he comes in a window box while the other three figures in series one (Joker, Black Mask, and Batman) come in clamshell packages. 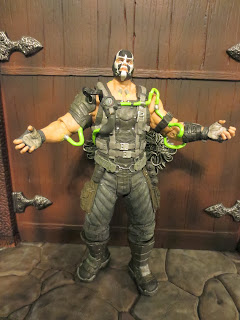 While lots of people have been praising the heightened articulation of the new Arkham Origins Batman figure, the villains haven't been as well articulated. They're built a lot like older DC Direct figures, which isn't terrible, but it is a bit disappointing. Bane features: boot swivels, peg/hinge knees, h-hinge thighs, peg/hinge shoulders, peg/hinge elbows, swivel wrists, and a ball jointed head. That sounds like a lot of articulation but most of it is severely limited. Bane's hips can barely move due to their design and the various canisters and gadgets worn on his holsters. I think the joint is an H-Hinge, but if it isn't it just means the hips are loose swivels. While the shoulders are peg/hinge joints to replicate ball jointed movement, they might as well be swivels as they are really limited in their range of motion, too, as are the elbows. Fortunately, the figure is very solid and doesn't seem prone to breakage.  The ball jointed head is fantastic and allows for some great, expressive poses, but everything else definitely relegates this as a cool figure to display but not really meant for play or posing. 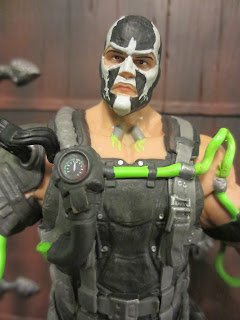 The sculpt is really good and is easily the best part of the figure; it really looks like Bane stepped right out of the video game. The sculpting was done by Gentle Giant Studios, a company that often uses scanning technology and creates sculpts from digital images, so perhaps they did utilize the in-game character model in creating the figure? Either way, it's really detailed. While Bane is a huge, muscular guy, he's not yet the venom overdosing freak that he has become in the previous Arkham games (which take place later in the continuity than Arkham Origins) so this sculpt looks more like the Bane you'd expect. He's wearing a modified version of his trademark luchador inspired mask that reveals his stern, intelligent gaze. It's a great Bane head sculpt. There's lots of cool little details all over his outfit as well such as military styled webgear, venom tubes running along and penetrating his skin, and various canisters and grenades. While they get in the way of the articulation, little details like the grenades and the monitor on Bane's chest really make this an impressive figure. 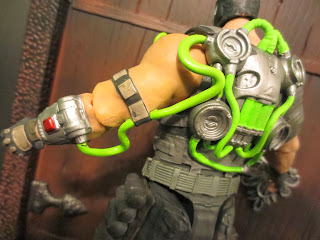 The paint work is good too. Everything look pretty clean for the most part with a nice mixture of dry-brushing techniques that effectively give Bane a rugged, realistic appearance. The head looks really good with neat details. The vibrant green chosen for the Venom tubes is n ice as well and helps the figure to have a little extra pizazz. The only thing I'm not sold on is the painted Venom leaking from some of his implanted tubes. It doesn't look as convincing alongside the rest of the excellent sculpt. Still, it's just one of the many small details on this guy. I love the stamped gauge on Bane's chest although the edges on mine are missing a bit of paint. 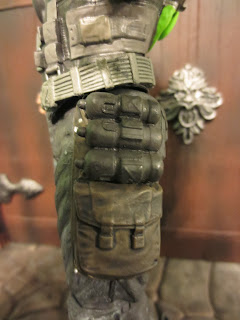 Unfortunately, Bane doesn't come with any accessories. Since he's a larger figure sold at the standard price point, I'm willing to let this slide a bit. Does Bane really need any accessories? The rocket launcher he uses in the game would have been cool but alas, it didn't happen. 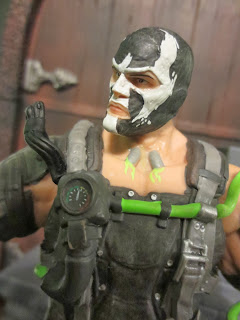 I'm giving Bane a Good and a 1/2- I wish his articulation were a bit better but that doesn't diminish the face that he's still an exceptional looking figure for your Arkham-verse shelf. I'm really excited to have this guy as I prefer the rendition of Bane as a brilliant and cunning strategist rather than simply a hopped up muscle bound maniac. A few better joints easily could have catapulted this guy to Greatness, but alas it just wasn't to be. I really hope that DC Collectibles contines to follw through with this line as it's a great chance to get a wide variety of Batman characters to collectors, especially villains. Besides general trouble maker Anarky (a character I've always liked), DC Collectibles also has new versions of Killer Croc, Deathstroke, and Deadshot coming out as well as a Firefly figure (a new character for this scale). Let's hope they get to Copperhead, Electrocutioner, and Shiva to round out the assassins and possibly a Gordon and Branden, too. Oh, heck, why not Barbara Gordon and Alfred while they're at it? The Arkham lines seem to be really good at getting us a diverse cast of Bat characters and I hope they keep coming.

Big Bad Toy Store still has Bane in stock, so head on over there and grab him today!

I've also reviewed the Arkham Origins Joker and Black Mask as well as the Legends of the Dark Knight Lethal Impact Bane. The Reel Brad Bell also gave us his review of the Hot Toys Bane from The Dark Knight Rises.