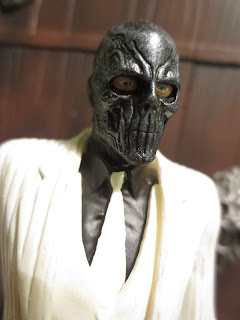 If you've read my review of Talia al Ghul from DC Collectibles' Arkahm City series 4 then you know that I've had some issues with DC Collectibles over the past year or two. I haven't heard of too many problems lately, however, so I decided to give DCCollectibles another chance with their Batman: Arkham Origins line. Based on the recently released videogame Batman: Arkham Origins, the prequel to Arkham Asylum and Arkham City, Arkham Origins tells the story of a Christmas Eve early in the Dark Knight's career on which the Black Mask has ordered a hit on Batman, drawing a number of mercenaries and hitmen to Gotham. I was at the midnight release of the game (first game I'd picked up at midnight since Skyrim in 2011) but I'm not too far into the game yet simply because I've just been so insanely busy with Halloween, work, and being out of town. While I've been tipped off that Black Mask is probably not the true antagonist of Arkham Origins, he still plays a very important part in the game's events so it's nice to have the character represented in the Arkham series' style.  Ever since his first appearance in Batman #386 in 1985, Roman Sionis has steadily become a more prominent villain in Batman's impressive gallery of villains. Ready to add this version to your shelf or should you look elsewhere? Read on and find out.... 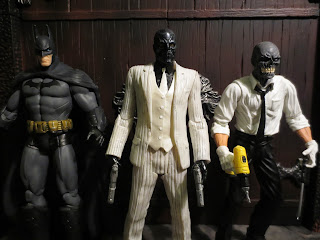 Black Mask stands about 6 7/8 inches tall putting him in scale with the previous Arkham Asylum and Arkham City figures from DC Direct/ DC Collectibles as well as most other lines those companies have released. He's a little taller than your average Mattel DCUC figure, though I'm sure eager fans could do something to make him work. I rarely talk about packaging, but I do want to comment that while Black Mask comes in a clamshell package, the back can easily be opened through a pull tab. This removes a section of the back of the package and allows the figure's tray to be slid out. In a way, this kind of makes the figure's packaging collector friendly. 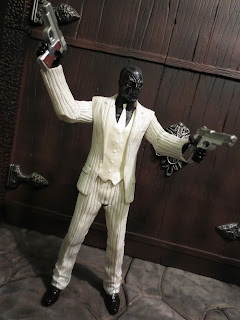 First things first: Black Mask hasn't broken on me yet! That's a great thing. In fact, he feels really, really durable. That comes at a cost, however,as the figure is much less articulated than most of the previous Arkham releases. He feels much more like an old school DC Direct release as his articulation is quite limited. He features: swivel hips, swivel shoulders, hinged elbows, swivel wrists, and a ball jointed head. His ankles seem to have some type of movement (perhaps a standard swivel) but one of them is completely immobile. My guess is that this due to these being separate pieces to aid in assembling the figure rather than being intended as points of articulation. I'm a bit disappointed in the articulation, although I'm happy that the figure is solid and durable. I mostly do just stand my Arkham figures on a shelf and photograph them, so I'm not devastated, but I know some collectors will be and this might seal the deal for them. Really, all Black Mask can do is stand around looking menacing and aim his guns. 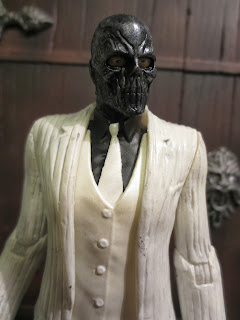 Interestingly, the pack of the package touts that sculpt as being done by Gentle Giant. Perhaps that explains why the figure has quite a different look than the previous Arkham action figure releases. The figure's not going to look out of place with the rest of your Arkham figures, but there's definitely a difference in the sculpt. It's much more rounded with softer edges and details. It seems a bit chunkier as well, whereas the other figures tended to be slimmer and more gaunt. Knowing the work that Gentle Giant does, this might be a reproduction of the in-game character model. The suit features some nice detail, including the vest and tie, but it's still just a bit soft compared with what we've seen DC Collectibles put out in regards to sculpting. The head sculpt is good, however, as all of the tiny details on the skull mask can be seen clearly. There's some nice texture work on the piece, far better than on the body. It doesn't quite match up with the more angular appearance of the in-game mask, though. 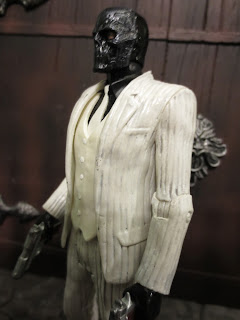 The paint on the mask looks good. It's a darker, almost charcoal, color and the back of the mask is a shiny black. The eyes are pretty clean looking through the eye-holes of the mask. The suit, however, just doesn't work for me. Black Mask is wearing a white suit and I get that the intention was to convey pinstripes, but this just looks messy. The Arkham games have features a grimier look for Batman's foes, but this just wasn't executed well. It's sloppy and uneven. The knot on his tie is also messy on my figure, although yours may vary. 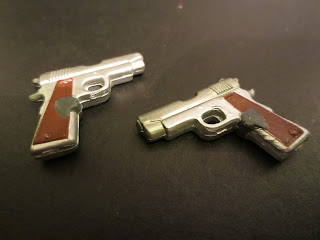 Black Mask comes with two accessories: his dual automatic pistols. They're nice, solid weapons and fit snugly in his hands. They're molded in a silver plastic with a darker gunmetal slide, a "wood" handle, and a grayish insignia on the handle. They look a little thicker than needed, but from the sides they're quite nice. A melee weapon or something that played to Black Mask's more twisted and masochistic side would have been a welcome inclusion, but I'm not going to complain about two nice pistols. Oh, but no stand. I know DC Collectibles dropped stands a couple of years back, but it still irks me. 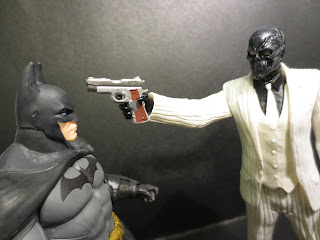 Ultimately, while I'm glad to have Black Mask on my Arkham shelf and very thankful that he didn't break, I'm not too satisfied with this figure. The head sculpt is nice, the guns are good, and the figure seems to have some good QC but the body sculpt, paint and wash, and articulation are just not up to snuff with what DC Collectibles has released in the past. This is only the third Black Mask figure to have been released (DC Direct released a great version of Black Mask a few years back in their Secret Files Rogues Gallery line and Mattel released one last year in their DC Universe Classics spin off Club Infinite Earths line) and I just don't think he surpasses either the older DC Direct version. I like the look of the character here, but the execution is just off. I'm going with a Good here simply because I don't think this guy lives up to any of the other figures in the line. He's solid in terms of not breaking and being a figure of Black Mask from Arkham Origins, but more casual fans might be better served trying to track down the older figure leaving this guy to diehard Black Mask fans and Batman completests.

BBTS actually has these guys still up for preorder, so if you're interested in one you probably want to snag him sooner rather than later. A lot of the Arkham stuff seems to get harder to track down over time.