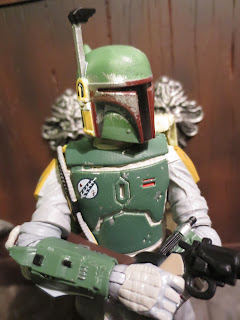 Who says "As you wish", keeps his face covered, and is hotter than melted butter on your breakfast toast? It's Boba Fett of course. Does the subject of today's review really need any introduction? Nope, but he's getting one! In the immortal words of mc chris: 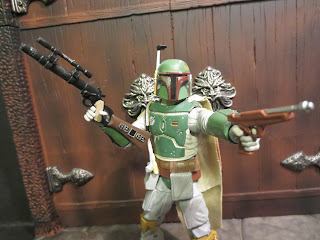 -from Fett's Vette by mc chris

Heck yeah. Boba Fett, baby. While this guy doesn't have the Han Solo in Carbonite accessory with him that SDCC 2013 exclusive version did, he's also not going to cost you the price of a 'Vette to procure him, either. Is there any character that fans really wanted more in a 6 inch Star Wars line than Boba Fett? I'd say maybe a Star Wars Black Darth Vader might be pretty appealing, but the Fett man's where it's at. I don't own the SDCC version, so this guy is all new to me. Is he worth the money? You better believe it! Check him out after the break... 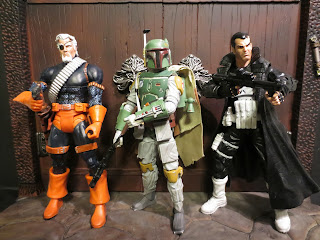 ﻿     The armored figures have been by far the best figures in Star Wars Black so far and Fett lives up to that. He pretty much looks like he just walked off of the screen from The Empire Strikes Back since that's the outfit he's wearing here. Yup, Boba's got a different outfit in Empire than in Jedi. This outfit lacks the red gauntlets, more colorful jetpack, and tan pouches that differentiate the later armor. Hopefully this means we'll get another version of Fett at some point as the man's too cool not to get a good rerelease. Boba Fett is about 6 1/4 inches (not counting his antenna). Seems right as Boba Fett is only supposed to be a little taller than Han Solo. 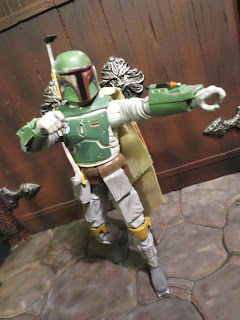 Not only is Boba Fett well articulated, but most of the articulation is nicely hidden. Fett features: lateral rocker ankles, hinged ankles, double jointed knees, swivel thighs, ball jointed hips, a ball jointed abdomen, ball jointed shoulders, a right bicep swivel, ball jointed elbows, swivel forearms, ball jointed wrists, a hinged neck, and a ball jointed head. All of the articulation feels good and solid with some excellent decisions made such as adding the right bicep swivel, allowing Boba Fett to both hold his weapon and to help prevent the cord running from his flamethrower gauntlet to his shoulder from breaking. There's a great range of motion in the head and all of the limbs which allows for some great, expressive poses. The only problem I have is with the mid-torso ball joint as it's well hidden under the chest armor but allows for little movement. Still, not a bad problem overall. You'll find yourself picking this guy up often to pose/play with him. 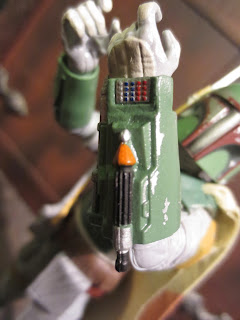 The sculpt is just excellent and nicely matches Fett's outfit in the film. Every detail you could hope for from the spikes on the end of his boots to the little buttons and switches on his gauntlets is accounted for. His under-suit has a nice mixture of folds and wrinkles to give it a detailed look. After pouring through lots of reference photos and trying to measure little details like the helmet shape (height versus width) and the amount of space that should be between the segments of his chest armor, the only legitimate problem I have with the sculpt is that the Wookie braids are just really, really weak. I think it might be the paint more than the sculpt that's the problem, but it's still an issue. I know Boba Fett has so many little details but the Wookie braids have always stood out to me as a significant part of the character's mystique.
His cape turned out so well and is one of the best cloth material pieces on a plastic action figure I've ever seen, so it's a shame Hasbro didn't opt for something like that with the braids. More on those in a minute though. let's just say that this guy is a near-perfect ESB Boba Fett, shall we? I mean, the little empty pocket on his left shin? It's there. 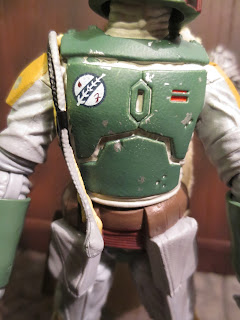 And here comes the paint. Mostly it's fantastic. The armor pieces are all correct and colored, the helmet is darn near perfect, and the little nicks and dents are applied masterfully. The gauntlets are amazing- look at them closely and you'll see a world of detail that you probably never noticed before unless you have a Boba Fettish (see what i did there?). I can't say enough about how happy I am except for that one thing I mentioned earlier: the Wookie braids. They're not painted well and one of them is left unpainted in the same grayish blue as Boba's jumpsuit. It really should have been brown, but it's not. There's also some sloppy paintwork on the jumpsuit between the rear armor and the front right chestplate, so all of the paint errors seem confined to this little area. The last thing I'll point out is that Boba Fett should have some blackish stripes on his boots, but they're missing here. It's just a bit disappointing when these little details keep this from being a perfect action figure, y'know? 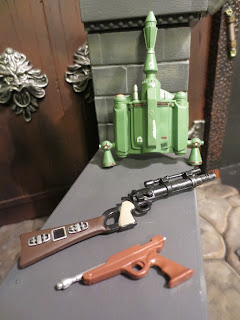 Boba Fett only comes with three accessories, but they're three pretty important accessories. He comes with his Mitrinomon Z-6 jetpack, his EE-3 carbine rifle, and his Sacros K-11 blaster pistol. The EE-3 carbine rifle depicted here differs from the Return of the Jedi version as it doesn't have the ribbed barrel displayed in the film. This is the Empire version modeled after the Webley & Scott № 1 Mark "I" Flare Gun. It's a super cool weapon with some great paint apps although it is a little too rubbery between the grip and the stock. While Boba can hold the blaster with both hands, the stock does get in the way of many poses. The Sacros K-11 is a neat little pistol that fits in the holster on Boba Fett's right hip. Known as "The Disintegrator," the pistol originally appeared in the Star Wars Holiday Special but would be replaced in Jedi by Boba's concussion grenade launcher (the cool little rifle with the weird stock). The paint on the jetpack is extremely accurate to the Empire prop that features much less paintwork than the version that appeared in Jedi. The jetpack easily plugs into a hole on Boba Fett's back and stays tightly in place. This is a great compliment of accessories although I kind of wish Fett had the removable helmet like the Vintage Collection figure did. I also would have went crazy for a "flame blast" effect like on his vintage card, even though he didn't use that in Empire. 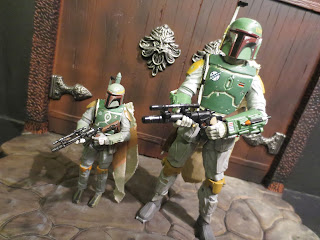 I'm conflicted. I love nearly everything about this figure- the sculpt, the paint, the accessories, the cape- everything except those stupid Wookie braids (I just think they could have been done better) but I still like the Vintage Collection Boba Fett figure better.  Even though it's in a smaller scale, it manages to have a removable helmet and a paint wash that gives the figure a really nice appearance. Every now and then I go back and have to look at my review scale to help me determine a figure's ranking (which is purely cosmetic since I've told you all of the details and my thoughts already). I think I'm ultimately giving Boba Fett here an Great and a 1/2. If I were telling someone to pick up one figure from this line, it would probably be Boba Fett, even if they're not a die-hard Star Wars collector, but there are a few errors that stand out to me and I'm a little disappointed that Hasbro didn't top the best 1/18th version of character with this release. Boba Fett is a character that people can appreciate simply because he looks awesome and gives off a cool vibe. I think he definitely qualifies an figure collectors should pay attention to and would recommend him to anyone wanting to see what this line is all about. If you can hold 6 inches of the Fett man in your hands and fail see the appeal, you've got issues and must be as cold as carbonite. Also, that sentence just came out very awkwardly worded. Oops. 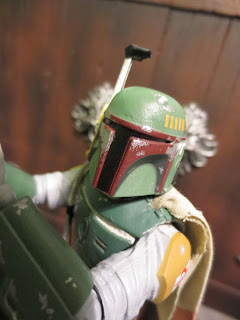 If you want a Boba Fett of your own, I've got a few options for you. First, you can head over to Big Bad Toy Store and purchase the entire case of Star Wars Black series 2 figures for $79.99 or you can pick up either the SDCC or Eurpopean Celebration figures by themselves since the regular version is out of stock. If you're feeling cheap and/or creative, you could also head over to PoeGhostal.com before next Wednesday and enter Poe's "Trygg Poftu" Expanded Universe bio contest.The winner gets a free Star Wars Black Boba Fett! 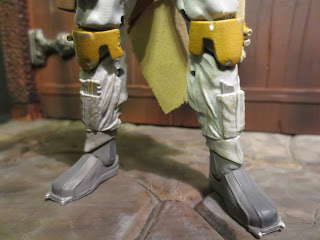