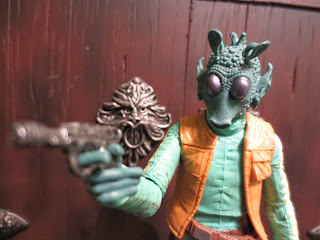 "Koona t'chuta, Solo?" Yes, now you too can reenact all of Greedo's famous scenes from Star Wars with the new Star Wars Black Greedo figure available from Hasbro! Yes, everyone's favorite Rodian bounty hunter is now ready to menace your Han Solo figure in Chalmun's Spaceport Cantina and subsequently get blown away. Who will shoot first this time? Greedo? Han Solo? Will they both shoot simultaneously? Now you can decide! There's not much more to say about Greedo for the more casual Star Wars fan (although the character has an insanely lengthy back story on Wookiepeida that even details how Greedo's body was ground up into a liqueur by Wuher. What the French, toast? That's some really dark, disturbing stuff, even for the Expanded Universe! Anyways, Greedo is proof that even characters with a mere minute or two of film time truly become icons in the world of Star Wars. What other film series would be able to include a character who appeared for less than two minutes in their deluxe line of 6-inch figures of the most popular characters? Heck, how many Greedo figures do you already own? I own at least six or seven. Star Wars action figures just don't operate under the same logic as any other toyline. Let's jump into looking at the figure so you can learn why you need another Greedo figure. Join me after the break.... 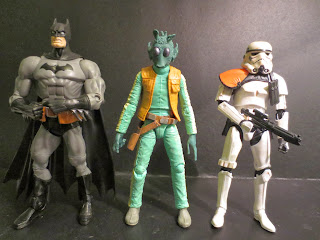 Greedo stands about 6 1/4 inches from the soles of his boots to the crest on his head. He looks excellent and sports the fantastic likeness that the non-human characters in this line have. While Hasbro doesn't have the regular human characters like Han, Luke, and Leia down to photo-realism, Greedo's about as close as you could probably get. I've mentioned in most of my other reviews that these figures come in really cool boxes but I'll mention it again here. While I imagine we're paying a bit more for these boxes they are collector friendly and are a nice way to store and display the figures. 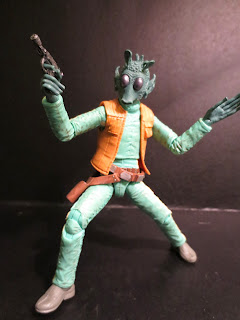 Greedo's got some nice, solid articulation. He features: full lateral ankle rockers, ankle hinges, double hinged knee joints, swivel thighs, ball jointed hips, a very restricted ball jointed abdomen, ball jointed shoulders, ball jointed elbows, ball jointed wrists, a neck hinge, and a ball jointed head. Everything feels tight with no quality control issues although there are a few joints that are pretty limited in movement. The abdomen ball joint is really limited in it's movement, as is the neck hinge, due to the character's body design. Still, I imagine that you're going to get nearly every pose out of Greedo that you could want; the arm, leg, and wrist joints really are excellent for getting some great, dynamic poses out of these guys. Greedo would easily be a toy you could hand to a kid with little fear of breakage. 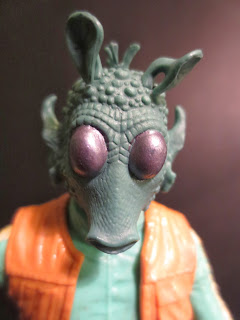 While I don't think the human likenesses in Star Wars Black are as bad as some people do, most collectors seem to be in agreement that the alien, droid, and armored character likenesses are out of this world. Greedo doesn't ruin the streak as he's just fantastic. The hands and headsculpt are excellent, perfectly capturing the weird alien look of everyone's favorite Rodian. The fingers are great with their extended and sucker-like nature and the portrait is loaded with a superb amount of detail. From the individual bristles on his Mohawk to the little bumps and ridges covering his head, there's not a dull spot.  Greedo wears a really interesting uniform that seems pretty simple but manages to have some nice detail. The sleeves and pant legs have always seemed a bit puffy and that texture is portrayed here nicely through the folds and creases covering them. His stylish orange vest is a separate piece and is removable in case you want to give Greedo a different look. 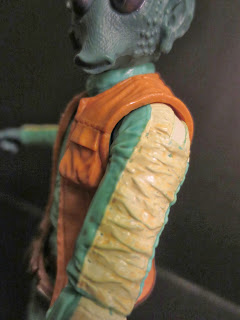 I'm really impressed with Greedo's paintwork. It's minimal, but what's there is super neat and clean. His outfit is also covered with a nice wash that gives it a grimier, more lived in look. The only messy paintwork I could see was a little but of missed edging on his belt (not the holster belt, but the smaller belt that's sculpted on underneath). The eyes look good and have a nice shiny, reflective look to them. I thought the recent 1/18th Greedo from the past few years was pretty good, but this guy blows him out of the water. 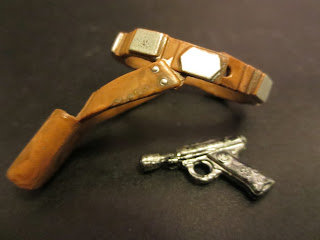 Greedo has a weak point, however (and I'm not talking about his aim): it's his accessory compliment. While most figures have come with a nice assortment of accessories, Greedo only comes with his blaster, holster, and the removable vest I mentioned earlier. The blaster is the DT-12 heavy blaster pistol that Greedo wields in A New Hope and it looks spot on from what I can tell. I like the weathering on it and how easily it fits into Greedo's hands. The DT-12 was specifically designed for aliens with longer fingers (like Rodians) so it's nice to see that Hasbro's toy version is equally functional! The pistol fits easily in Greedo's holster and the holster fits nice and tight around his waist. It looks fantastic on him. Still, I wish Greedo would have come with one more accessory to truly make him feel like a deluxe figure. Here are my suggestions: an alternate "dead faces" Greedo portrait, two glasses, or the little hover droid that flew through Mos Eisley in the special editions. 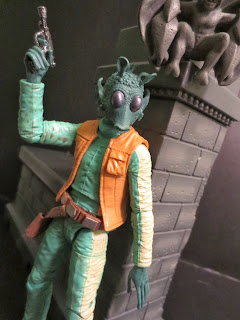 While Greedo certainly deserved another accessory and has a few restricted joints, he's probably one of the best figures in the line so far. While he doesn't have the wealth of cool features of a character like R2-D2 or the additional looks of Han Solo and Darth Maul, he's still a completely solid figure that perfectly captures Greedo. Other than the accessory issue, there's nothing wrong with this figure. At all. Greedo's easily a Great and a 1/2 figure. What more could you actually want from this figure?


Remember, BBTS.com has Star Wars Black series 2 in stock. You can pick up the whole set for $79.99 or just Greedo for $18.99. Those are really good prices on these excellent figures!