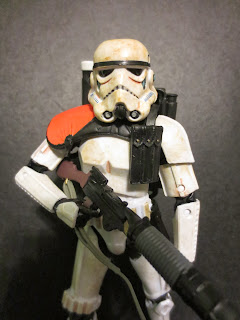 I'm always intrigued regarding the characters Kenner chose to include in the vintage Star Wars line and the characters they left out. While I wasn't born until 1983, discovering the vintage line during the mid 1990's was a magical experience as there was just so much product out there. Figures, vehicles, beasts, and play sets: the Kenner line had it all. Well, all except for the Sandtrooper. The Sandtrooper was always one of those characters that seemed like a glaring omission from the vintage line. To think that Kenner even went about creating a Dewback and yet left out the Sandtrooper. Of course, the Sandtrooper was always a fairly easy custom for fans of both the vintage and Power of the Force II lines, but fairly early into POTF II (around December of 1996) Kenner released the first official Sandtrooper with a second to follow in fall of 1997, mounted on a Dewback. Interestingly in Star Wars Black, Hasbro chose to get the Sandtrooper into the hands of collectors right out of the gate. It was an interesting choice, but one that turned out to be a great figure. Let's look at this guy a little more closely after the break.... 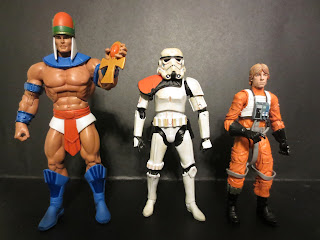 In Star Wars Black, is Luke still a bit short for a Stormtrooper? Yes, he is. The Sandtrooper measures in around 6 1/4 inches while Luke's only 5 1/2. Seems about right here as with this being a 6 inch scaled line, it makes the Stormtrooper about 6'2" or 6' 3" which seems about right. These guys really do look like Iupscaled versions of the standard 1/18th scale figures so they have that a realistic appearance to them. it's not eerily realistic like a Hot Toys figure or something from NECA, but more similar to some of the better Mattel Movie Masters. As is the case with the rest of rest of the figures, the Sandtrooper comes in a collector friendly box. 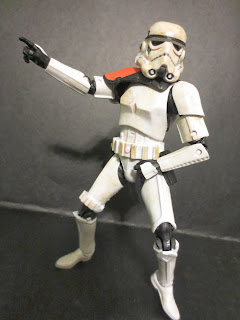 Since the Star Wars Black figures are all unique sculpts so far, the articulation can vary a bit from figure to figure. The Sandtrooper has some of the most impressive in the line so far, which consists of: hinge/peg ankles, double hinged knees, swivel thighs, ball jointed hips, a ball jointed abdomen, hinge/peg shoulders, swivel biceps, double hinged elbows, hinge/ peg wrists, a hinged neck, and a ball jointed head. The amount of articulation and range of motion it offers the figure is really beneficial in allowing for poses where this guy would be firing various weapons with both hands, ducking down to fire, or riding a creature (such as a Dewback). Most of the articulation is really well hidden, too, fading naturally into the plethora of armored plates making up the Sandtrooper's uniform. I have two complaints with this figure, however, and this is the natural place to talk about them. First of all, my Sandtrooper's right thigh swivel is fused together. Not stuck, but completely fused together. I had the same problem with my Darth Maul's neck hinge and no amount of freezer time, hot water, or even using a some tools to try and separate the joint would fix it. I had no problems with any of my series two figures, but that's two of my series one figures that have had issues of fused joints. Secondly, the elbow and knee pieces are really rubbery. I don't think they're going to tear or anything, but it still seems a bit annoying. 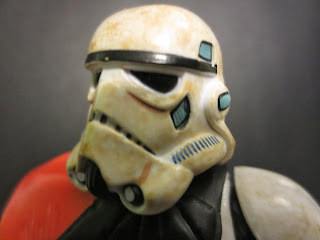 Contrary to popular belief, Sandtrooper are not just dirty Stormtroopers with a backpack. While some of there armor is quite similar, there are multiple little details that differentiate the two troopers. I'm not going to go through every detail here myself as this guy has already done a darn fine job of pointing these things out. I'm going to take a look at the seven distinctives for Sandtrooper armor and see if Hasbro nailed them based on the LookSirDroids.com writeup. So, is Hasbro going to reuse the Sandtooper helmet for a Stormtrooper? Well, according to early images from series three, the answer is no. The differences seem to be able to be accomplished mostly with paint as the trapezoidal markings on the back of the Sandtrooper's helmet don't have stripes (as they shouldn't) and the "teardrops" under the eyes have the stripes sculpted on, but they aren't painted black. The "mouth" of the helmet is also a lot longer than the standard Stormtrooper helmet, however, so that's a sculpted element that looks pretty spot on here. I like the helmet sculpt and am quite pleased with it. 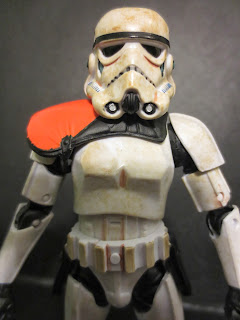 The standard Stormtrooper armor has ribbing on the seams around the neck hole while the Sandtrooper armor does not. It seems here, though, that Hasbro wanted to reuse the main body sculpt because the ribbing is present. It's hidden under the pauldron, though, so it's not noticeable unless you go looking for it. The stomach armor on the figure is different from the Stormtrooper's, as it should be. It's actually a bit more interesting to me. The belt is not removable but it does have the longer ammo pouches on it versus the holster and not the smaller drop boxes of the standard Stormtroopers.  Of course, the diamond shaped kneepad is present, which might be the most obvious detail other than the orange squad leader's pauldron. What does all this comparing mean? It means Hasbro did their homework and brought their A game to this. (Had this been Mattel, Star Wars Black would probably have consisted of Sandtroopers, Stormtroopers, Clone Troopers, and Han and Luke in disguise all wearing the same armor. There'd also be a giant Wampa that turned yellow over time.) The sculpting is crisp, the paint work neat, and the sand effects look pretty good. I actually think they could stand to be a bit heavier, especially considering this picture. Those guys were really, really dirty. 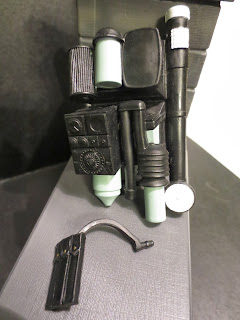 While I'm starting to get worried that future Star Wars Black releases are going to be pretty light on accessories (Obi-Wan doesn't come with a cloak and Bespin Luke doesn't have an alternate portrait), that wasn't a problem with series one. The Sandtrooper comes with his removable pauldron, an SD-48 survival pack with removable ammo pouch, an E-11 blaster rifle, a DLT-19 Heavy Blaster rifle, and a T-21 light repeating blaster. The only thing he's missing is the RT-97C heavy blaster (which is my personal favorite). The removable pauldron is orange indicating this trooper's status as a squad leader. It's a removable piece and can actually be swapped around when the figure's head is removed if you wanted to put it on the other shoulder for some reason. The survival pack is a really large piece that plugs into the "doughnut" on the Sandtrooper's back. It stays nicely in place and looks fantastic with lots of unique paint apps and little doodads attached to it. The removable ammo pouch piece can be attached to the backpack and sits over the Sandtrooper's left shoulder. It looks like a German MP-40 ammo pouch, similar to the pouches hanging from the Sandtrooper's belt. 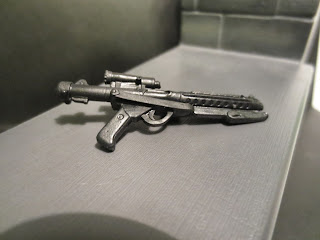 The E-11 is the standard Stormtrooper blaster rifle. It's nice and solid with a great sculpt. 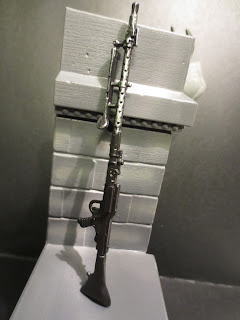 The DLT-19 Heavy Blaster is the longer rifle based on the German MG-34 that can be seen in the original trilogy in use by Sandtroopers, Stormtroopers, and even 4-LOM. It's a nice solid weapon made from sturdy plastic that features some great sculpting and some nice silver paint apps to give the barrel a tarnish, lived-in look. 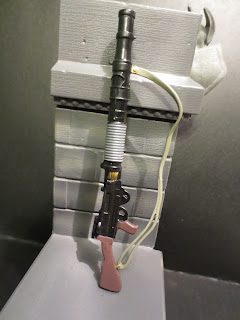 Lastly is the T-21 light repeating blaster which is the large rifle with a sling that I always associate with the Sandtroopers (probably because the Kenner POTFII Sandtrooper came with one). The gun has lots of different paint applications on it and looks really nice, although it is a bit rubbery. While trying to achieve some poses with it, you'll notice the rifle can bend a bit. Just be careful! It's a great complement of accessories for the Sandtrooper and should allow you to equip a number of other figures if you desire to army build or just want to give Greedo a bigger gun. 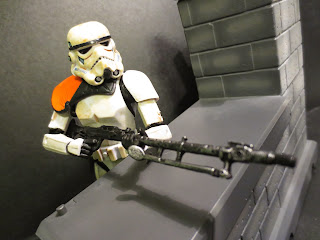 This guy turned out excellent. The only complaint I have is with the rubbery elbow and knee joints and the rubbery bicep pegs. I don't think they're going to break or anything, but they feel weird when trying to pose the Sandtrooper who otherwise has very tight, solid articulation. I've been pretty impressed by this guy so far and I hope the line has a really strong future ahead of it. Since it's Star Wars and because we have new movies on the horizon I'd say chances are good this line will have a long, successful life but due to the complete weirdness of the toy industry these days and the way these aren't being stocked at Wal-Mart and are seemingly starting to get jammed at places like Target, there's a little fear in my mind. Still, for this guy I'd say he's a fantastic example of what this line can do. He's easily an Epic figure. If you had to buy one figure from the line, this should probably be the one. Lots of gear, excellent articulation, great attention to detail, and three really nice blaster rifles. Now c'mon, head on out and buy him while you can. Move along! Move along! 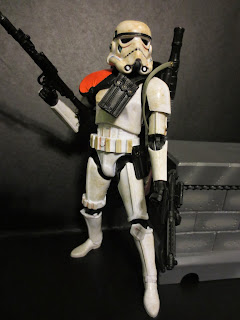 If you're trying to track one of these guys down and keep getting discouraged by finding droids you're not looking for, you can always head over to Big Bad Toy Store and pick up one of these guys there. They have the Sandtrooper by himself or you can order the whole set of series one for only $79.99, probably cheaper than you could find them at retail. 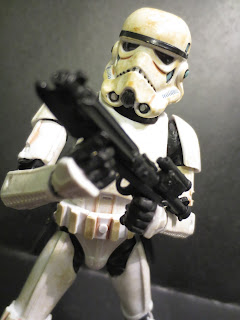