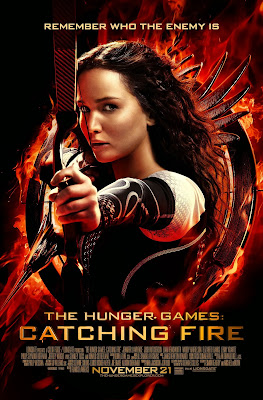 The Hunger Games, much like Harry Potter and Twilight, was an instant hit when it first came out in hard back. Now that the second film in the three part series, Catching Fire, has been released in the United States the craze has rekindled (bad fire pun intended).  I went with one of my good friends to see Catching Fire this past Sunday and I must say we were not disappointed! Read more about this fabulous conflagration of a movie after the break!

First things first, I must say that this movie surpassed all my expectations. I’m a real cynic when it comes to books made into movies. I’m a diehard movie fan but, if it’s even possible, I’m an even more die hard book fan and usually I’m 100% loyal to the book. But Francis Lawrence (director), Simon Beaufoy (screen writer), and Michael Arndt (screen writer) did a fabulous job with adapting Suzanne Collins’ novel. There were several moments in the book that I thought were particularly impactful and/or important and ever since the first Hunger Games movie came out I had been praying they would be included. I was pleased to see that most of them were.

One particular moment was when Katniss and Peeta were at President Snow’s house for the end of their victory tour party. In the book they are standing around eating food when a Capital Citizen offers them some more to try. Peeta kindly refuses saying that he is too full. The person then produces a drink which causes the drinker to vomit up what is in their stomach so that they can keep on eating. In the book this moment hit me hard as a disgusting view into the lavish and trivial lives of the Capital citizens causing me to feel even more loyalty to the districts, inciting hate in my heart toward the Capital and all it stood for: domination, power, wealth, frivolousness, shallow living, and contempt for the districts. I was thrilled when this scene happened in the movie although it did not hit me as powerfully as it did in the book (but that may have been because I had already experienced the full force of the situation).

I currently work at a fabric store and so I see costumes, talk to costumers, design clothes, and talk about fabric every day. I’m wondering if that may be why I was so in tuned to the costuming of this movie. I must say that the detail and precision with which the costuming of this movie was executed was completely on point. I caught myself on several occasions thinking, “Oh wow! That costume is just magnificent!” And it wasn’t always the big frilly capital attire that grabbed my attention. The first time it happened was the first time we see Katniss at the beginning of the film. She is in hunting attire and she has the most beautiful knitted scarf/vest thing. I’m not even sure what to call it because I’ve never seen anything like it before but it was eye catching while still being appropriate for the situation.

The acting in this film was just phenomenal! I could tell that each actor was fully invested in their rolls. They all have complete grasps on characters, understanding motivations, back stories, body language, etc. One of the best bits of acting in the whole film is when Peeta gives an interview with Caesar Flickerman. In order to not spoil a very powerful moment, let’s just say Josh Hutcherson (Peeta Mellark) was able to fool me, a person who read the books and knew exactly what was going to happen. Jennifer Lawrence (Katniss), Elizabeth Banks (Effie), and Woody Harrelson (Haymitch) all put in a wonderful performance as well. One of my complaints is Katniss’ final performance, not because Jennifer does a poor job but because I just felt like it was a horrible way to end such a fantastic film. But you can decide for yourself.
My second complaint was the cinematography during the night time scenes. Many action packed scenes happen at night and for whatever reason it was just hard for me to see exactly what was happening. Now I do have bad night time vision so that might have been the problem but during several scenes I wanted to pause it so I could turn up the brightness, then I realized I was in a theater.
I don’t want to talk too much more about this movie because there are so many powerful moments and I don’t want to spoil it for anybody. All I want to say is if you have read the books and enjoyed them this movie does not let you down. I will hopefully be going to see it again within the next few days myself.
Cheers!

Generbeener would like all the fan girls to know that she is hardcore team Peeta.