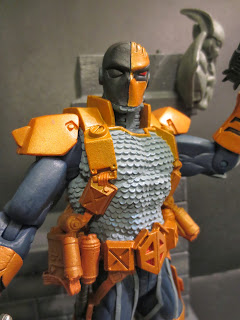 There are two reasons I picked up the action figure of Deathstroke from DC Collectibles' New 52 line:
1) I've always liked the look and character of Deathstroke, AKA Slade Wilson, so he appeals to me as a toy.
2) Due to his various associations and affiliations and along with his appearance in Batman: Arkham Origins, I consider Deathstroke to be enough of a Bat-family villain that I will happily begin adding figures of him to my shelf.

There are quite a few Deathstroke figures out there along with quite a few more coming out soon. Besides this guy, DC Collectibles has released a 1/18th Deatstroke in their Injustice: Gods Among Us line and is preparing to release figures of Slade based on his appearances in Arrow and Batman: Arkham Origins. Need help deciding on which version of Deathstroke you want to add to your shelf? Then join me after the break as we examine his New 52 appearance. 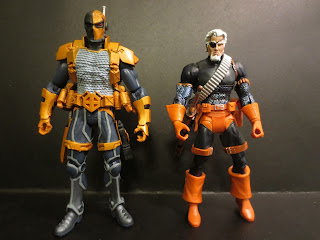 Deathstroke stands at 6 3/4 inches tall and looks fantastic. He's based on his redesign for the New 52 which wasn't a drastic change, but one that really works well.  DC Collectibles did a great job of capturing both the comic book appearance of the character while also making a highly detailed figure that looks good in three dimensions. While the comic art on Deathstroke (across a number of titles) has been extremely well detailed, the sculpt does a nice job of blending together the various appearances. 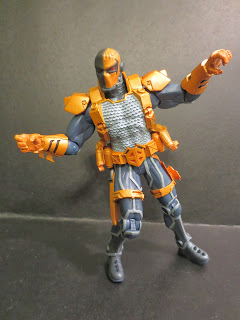 Deathstroke has what seems to be the new standard DC Collectibles articulation: hinged ankles, hinged knees, swivel thighs, swivel hips, swivel/hinge shoulders, swivel biceps, hinged elbows, swivel forearms, hinged shoulder pads, and a ball jointed head. I really like Deathstroke's articulation as it feels solid and well thought out with some good quality joints. I have a few problems, the first being the the lack of ball jointed hips of some kind. Without these most of that lower leg articulation is just meaningless, a particular travesty for Deathstroke who is a pretty agile fellow. The ankle hinges are a bit weak, too, sometimes causing Deathstroke to tumble over. I like the addition of the hinged shoulder pads, although they can look a little unusual when the shoulders are swiveled forward. 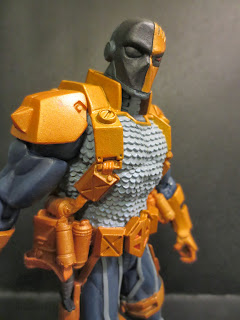 The sculpt is usually the high point of a DC Collectibles release and here Deathstroke doesn't disappoint at all. His costume, while memorable, has always seemed to be a bit of a utilitarian mish-mash of whatever pieces of gear best suited ol' Slade. While his standard bodysuit looks like a standard New 52-ish bodysuit with lots of raised lines and armored pieces, his chest armor looks to be made of scale mail. It's a nice visual cue that ties the New 52 Deathstroke with his former appearance as well as makes him seem like a bit of an eclectic guy when it comes to warfare. In the New 52, Deathstroke's armor is supposed to be composed of Nth metal to help provide the highest level of defense. His shoulder, armor, tactical harness, and belt all fantastic and as if they were personally customized to meet Deathstroke's unique needs. Hanging from his belt and webgear are plenty of various pouches and explosive devices, all of which have a very high level of detail. There are satchels/ bandoliers hanging off of his sides that are molded in a softer rubbery plastic that seem to hang loose from the character's body. His gauntlets are wicked looking and have the bladed hooks on them, similar to Batman. Deathstroke's head is encased in his helmet and it looks really wicked. Various armored parts of the helmet come together to present a visage that looks equal parts tactical and terrifying. 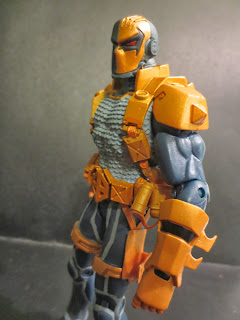 The paint is excellent as well, although you do have to realize that DC Collectibles went to great lengths to match the comic look of the character. The suit and scale mail are a good mixture of dark blue and a lgihter grayish blue while the armor and various accoutrements are various shades of orange. They're not painted to look realistic but to match his comic appearance, thus not every grenade or pouch get's it own paint app to make it look like a realistic weapon. It's stylized and looks fantastic; I really, really love the various metallic oranges DC Collectibles used here. The paint work looks extremely neat and clean, especially considering how many unique paint apps there are. 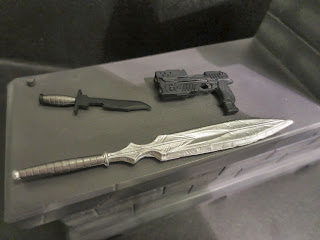 Deathstroke figures usually come loaded with various weapons, so he doesn't disappoint here. He comes with his signature sword, a pistol, and a knife. The sword is an awesome accessory and reminds me of a more modern version of a Roman gladius. It seems to be equally capable of stabbing and slashing and is covered with fine details such as various scrapes and scuffs. It has a slot on it so it can attach to a peg on Deathstroke's backpack. The pistol is another solid acceesory: it looks to be a large calibre pistol augmented with an extended clip, a laser sight, and a specialized barrel. It clips easily into a clasp on Deathstroke's left hip and fits pretty well in his left hand. Last, but not least, is a small combat knife. It's wicked looking with an extra paint app on the handle. It slides snugly into a sheathe on Deathstroke's right hip, which means that Deathstroke can carry all of his weapons on his body and still have his hands free. I love when a figure can do that, especially when they're as well equipped as Deathstroke! 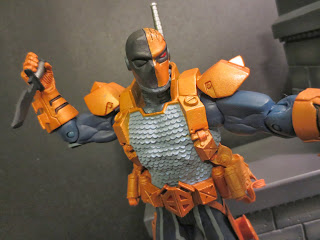 Deathstroke is a pretty fantastic figure. If it weren't for the articulation hiccups such as the more static hips and weaker ankles, I'd be giving him an Epic. As it stands, he's getting a Great and a 1/2. He's really, really excellent. I'm not sure if he supplants the DC Universe Classics Deathstroke as my favorite Deathstroke (I like this costume better, but that guy had more weapons and better articulation) but he's close. If you don't have a Deathstroke and want one, I'm not sure why you wouldn't snag this guy ASAP. Heck, even if you don't know who Deathstroke is this figure still looks plain awesome. I know there's a Arkham Origins Deathstroke coming out (I already have mine preordered) so it looks like we'll be having a battle of the Deathstrokes in the near future. Is that really a bad thing, though? 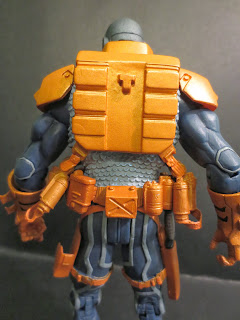 You can order this New 52 Deathstroke, as well as plenty of other versions of the character, at Big Bad Toy Store.com! Tell 'em The Epic Review sent you! Pick him up now, or Deathstroke will have to turn his back on you!

I've also reviewed the New 52: Super Villains The Joker from this same line.