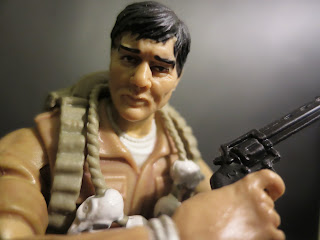 If you've never read the old Marvel G.I. Joe comic series G.I. Joe: A Real American Hero, you can be forgiven for assuming that it was simply a Saturday morning cartoon/ toy advertisement turned into a funny book. You'd be wrong, however, as reading and rereading the series, mostly written by storytelling master Larry Hama, it's amazing how much depth, humor, and drama was woven into those pages. Even if a character only appeared briefly, Hama made sure to find ways to gave them distinctive characterization that helped them stand out. While Hama typically took Hasbro's toys and brought them to life, there certainly were a few characters he created for his stories that were so appealing they had 80's kids searching the toy aisles looking for action figures that didn't yet exist. One of those characters was Kwinn. Appearing during the first year of the comic, Kwinn was a mysterious and honorable Inuit mercenary who was definitely his own man. While Hasbro released a version of the character in his arctic gear from issue #2 back in 2004, it's Kwinn in his jungle outfit that fans have dreamed about owning for almost 30 years. After a few years of teasing us, Hasbro managed to finally release the jungle version of Kwinn in the G.I. Joe: Retaliation line. Yes, while Kwinn has nothing to do with G.I. Joe Retaliation, I couldn't care less. He's an excellent figure and well deserving of your attention. Ready for a look at this guy? Then join me after the break... 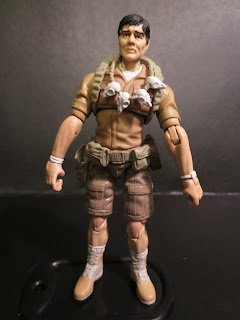 Kwinn has always seemed like a fairly large guy so his 4 1/8th inch height seems correct in making him one of the taller troops in the modern G.I. Joe era. While he's part of the Retaliation line, he has all of the joints, detail, and accessories you would expect from figures of the Pursuit of Cobra or 30th Anniversary eras. He'll fit in with basically any modern G.I. Joes from the 25th Anniversary line forward. 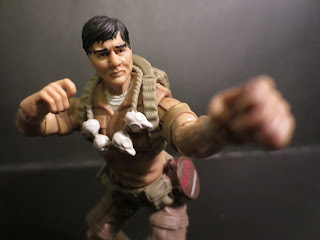 It's so sad that Hasbro's been releasing so little Joe product lately (or that what they are releasing is so difficult to obtain) because there has been some truly excellent figures with fantastic articulation. Kwinn is amazingly well articulated: swivel/hinge ankles, double jointed knees, ball jointed hips, a ball jointed abdomen, swivel hinge shoulders, swivel/ hinge elbows, swivel/ hinge wrists, and a ball jointed head. You'll be amazed at how many poses you can get old Kwinn here in! He'll have no problems holding any of his included weapons in a convincing manner. Great quality control here as well, something Hasbro usually seems to be pretty good at in the G.I. Joe line. 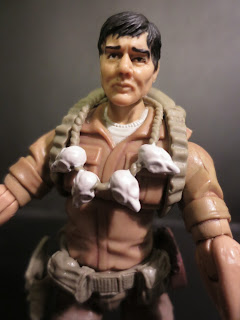 While I initially thought that Kwinn was an all new sculpt, a quick search at YoJoe.com reveals that he does share some parts with a few previously released figures. Hasbro used the torso, waist, and upper arms from the Rise of Cobra Sgt. Stone figure and the lower arms from the 2012 G.I. Joe Collector's Club exclusive Footloose. Still, everything looks perfect and matches Kwinn's signature outfit. Clad in a khaki shirt and safari cargo shorts along with some hiking boots, Kwinn's ready for tracking, hunting, and winning. He has a great, distinctive headsculpt. I love the little details on G.I. Joe figures such as the straps holding up Kwinn's rolled sleeves, the various pockets on his shorts, and the ribbing on his socks that are peaking up above the tops of his boots. The paint work is nothing to complain about, either. The shirt is a bit brighter shade of tan than the shorts, which are much more subdued. There's an excellent wash on the shirt that gives it a very vibrant appearance.


OK, now that we've covered the figure itself it's time to get to my favorite part of any G.I. Joe figure- the veritable arsenal of accessories. Kwinn is one of the most loaded figures I can recall. While most of the accessories are reused from other figures, they're still perfect fits for him. Here's a rundown: 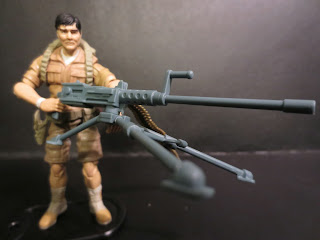 The M2 Browning is the same as the version that came with the first 25th Anniversary Roadblock. It comes with the detachable tripod as well as two belts of ammo. An ammo belt can be attached to it and it can be held or carried by Kwinn. Remember, it's an 84 lb. weapon, but Kwinn is a big dude. 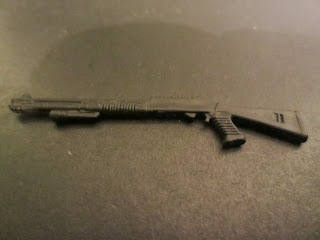 Kwinn's shotgun looks like a Benelli M3 with a mounted tactical flashlight. Originally appearing with the Brucw Willis styled Joe Colton from earlier this year, Kwinn absolutely rocks this weapon as he can hold it in a variety of two-handed poses. 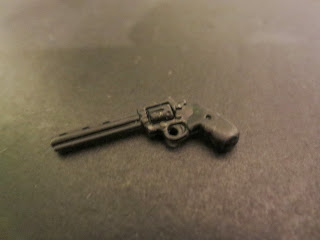 In his holster Kwinn can store his massive revolver. I'm not sure exactly what model it's intended to be, but it's a nice sculpt. It's another accessory that first appeared with Joe Colton from earlier this year and a sidearm that fits Kwinn's personality as it seems like it could also be useful for big game hunting. 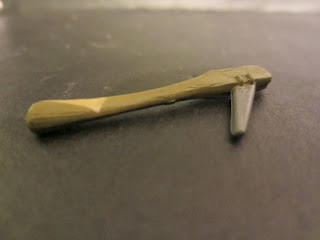 I'm not sure what to call this, but it's probably an Inuit tool of some kind that Kwinn carries for survival and close quarters, silent combat. That spike on the end it wicked looking and there's a nice wood grain pattern on the handle. 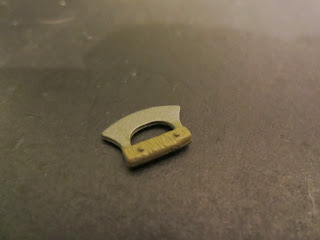 While the ulu is considered to traditionally be a women's knife used for domestic tasks, I'm sure Kwinn appreciates the versatility of it as a tool as well as it's use as a compact weapon. It's an incredibly unique accessory. 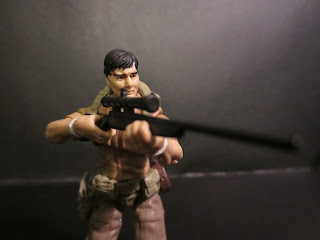 Kwinn's bolt action sniper rifle was originally included with the G.I. Joe Resolute Scarlett figure and has been one of my favorite modern Joe weapon sculpts. It's quite versatile, showing a resemblance to various military rifles like the M40 family, the Remington 700, or the Winchester Model 70. The body of the rifle looks composed of a synthetic material, not wood, and has storage on the stock for extra ammunition. 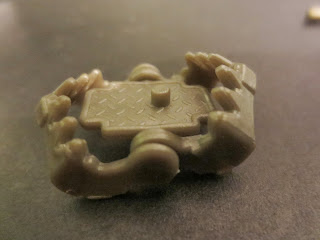 Kwinn's foot trap is a nasty looking piece of equipment that originally came with the Pursuit of Cobra Recondo in 2010. It's made of three separate pieces and actually kind of works. Whether capturing human or animal game, this seems like an effective tool. 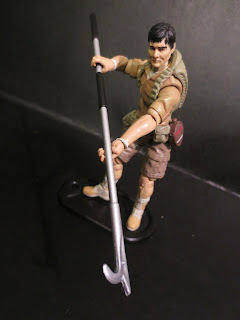 This fishermen's spear might be called a Gaff, if my research is correct. I believe this accessory first came with the Pursuit of Cobra Toys R Us exclusive Shipwreck and it seems well reused here. It's pointy and seems like it could have plenty of tactical purposes. 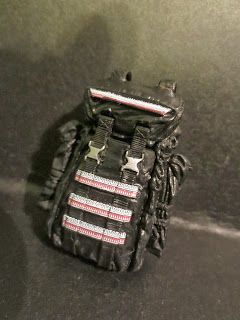 To carry some of his gear, Kwinn comes with a very cool rucksack. Originally coming with the Pursuit of Cobra Low-Light, this pack has been redone with a cool red and white pattern on the sides. It does open and can store the ulu and pick-like tool as well as the trap if you disassemble it. 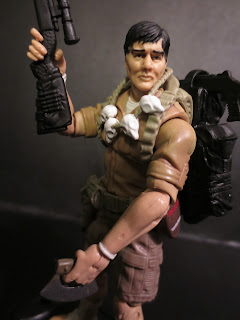 While they're part of his look, Kwinn's weasel skull necklace, harness, and belt are removable. I love the belt- it's got a holster, a sculpted on knife in a sheathe, and a canteen with a cool paintjob. They fit great and are easily removable. Last, there's the stand. It's the dog tag like stand that the Rise of Cobra desert equipped Duke came with, but there's no name or anything on it. It's just a plain stand. Still, it's a stand and it works.

I love Kwinn. He's an excellent character that Hasbro managed to turn into a stellar action figure. There was a time, probably between 2006 and 2010, when G.I. Joe was my main collecting focus. I was a hardcore completionist and purchased vehicles, club exclusive stuff, retailer exclusives, and even retailer exclusives. After awhile, though, Hasbro began to rely much too heavily on repaints and releases. Then their figures started getting too difficult to find at retail. Then the exclusives became far too difficult to acquire. The day I couldn't get a SDCC Sgt. Slaughter was the day I gave up my G.I. Joe completionist tendancies. I still buy great Joes when I can get them and I'll say that Kwinn is a confirmed Epic figure. He's amazing- excellent articulation, plentiful accessories, and a great sculpt. I could see Kwinn fitting in well in a number of places, including Hasbro's Indiana Jones line, but I'll probably display him alongside my other modern G.I. Joe favorites, perhaps even along his fellow warrior Snake Eyes. Those two guys make a wicked pair.

If you're interested in a Kwinn of your own, head on over to Big Bad Toy Store and pick one up today.