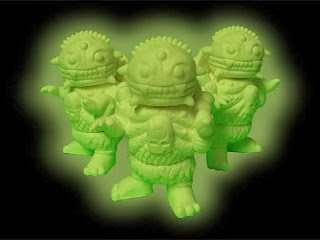 Ready for a kaiju that really brings the beef?

Glenn at Bad Teeth Comics sent me a press release regarding a really cool Kickstarter project he's working on for a new 4.5 inch vinyl toy: The Cheesetroyer! With "gross monster features, kaiju style and a cheeseburger for a head next to a sesame seed turtle shell", this is a toy that you're going to want to add to your shelf and/or possibly snack on (*editors note: toy is not really edible*). 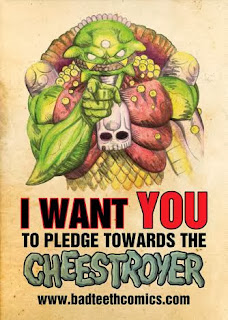 If you're interested in this guy, head on over to Kickstarter and check him out. Bad Teeth has lots of different versions of this guy available and some other pledge incentives including a comic book. They're pretty close to their goal so head on over and pitch in. More pictures and the press release after the break....

Bad Teeth & Double Haunt are preparing to unleash their Mini-Cheestroyer figurine in 2014!! The recent resin releases have all sold out, so the guys have decided to produce the "little cheeseburger monster" in gorgeous vinyl! They need a little help to get everything up & running so they have set up a Kickstarter for the production of the toy. 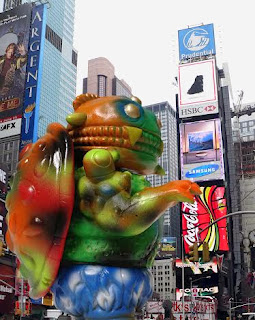 For only $35 you can get a super cool 4.5 inch vinyl version of the Mini-Cheestroyer.. in a variety of options!! The first wave release will consist of Glow in the Dark vinyl, Crystal Clear vinyl and Clear with Guts editions! Other pledge rewards include hand-painted resins, clear resins and copies of the Cheestroyer comic book! Stretch goals include a variant head for the toy and a micro figure of the original "Cheese" character.

The artists from Brisbane are betting all or nothing on this super cool cheeseburger kaiju & promise big things in the future for the Cheestroyer! Let's get this thing funded so they can get to work putting these plans into action!! You can pledge here - http://kck.st/HQhSIZ