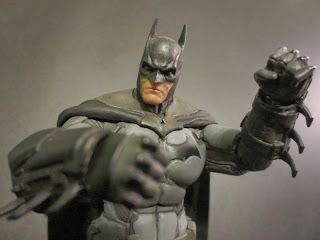 Over the past week I've been cleaning and rearranging my world famous hobby room to make room for all of the new toys and action figures I've added to the collection since the middle of last year. It had been awhile since I rearranged my display shelves of 6-7 inch Batman figures and now I have two full shelves of Batman figures. Not two shelves of Batman characters like Joker, Robin, and Batgirl, but two shelves of simply Batman himself. Only in the 6-7 inch scale. Not including older Kenner and Mattel figures from the animated or movie lines. Yes, that might be obsessive. Anyways, when DC Collectibles released their Arkham Origins action figures based on the newest installment in the video game series I snapped up the villains in a hurry but left Batman. Did I really need another Batman? It turns out that I did. After seeing lots of great pictures of him online I figures that the Arkham Origins Batman was just too good to pass up. While the videogame Arkham Origins is a prequel to Arkham Asylum and Arkham City which covers a particularly catastrophic Christmas Eve from Batman's early years, there's nothing about this figure that makes Bruce look like a rookie. In fact, this might be one of the roughest, toughest looking Batman figures ever released. Ready for a look at the Arkham Origins Batman? Then join me after the break... 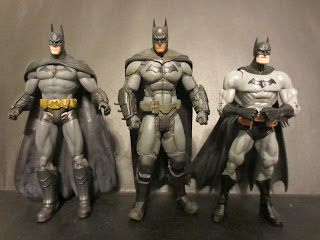 Batman stands about 7 inches tall from the bottoms of his feet to the top of his head (not including his "ears"). Overall the Arkham Origins figures seem to be a little smaller than the previous Arkham figures, but not so much as to look out of place when posed together. One of the nice things about DC Collectibles is that they almost never reuse parts between figures so you're getting an all new sculpt that's extremely accurate to the source material. Looking at the similarity between this figure and the in-game model will definitely allow you to appreciate the way DC Collectibles captured the game's art style. 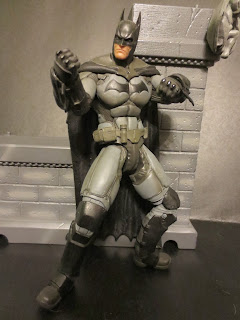 The articulation on the Arkham Origins figures has been very sporadic, but fortunately Batman is incredibly impressive with a great range of movement. He features: swivel/hinge ankles, double hinged knees with a swivel at the top, h-hinged hips, swivel waist, ab hinge, swivel/hinge shoulders, swivel hinge elbows, ball jointed wrists, and a ball jointed head. That's a lot more articulation than your standard DC Collectibles figure and honestly a little more than most DC Universe Classics figures as well. Due to his bulky armor, some of the joints (like the elbows and head) are more limited than others but overall I'm pretty pleased with it. The double jointed knees really are useful in allowing Batman to take on some brooding, crouching positions. I really wish he had a soft cape as they look better in a variety of poses, but the rubbery cape he has is fairly pliable and shouldn't impede articulation much. I haven't had any problems with breakage or loose joints. I'll also point out that due to the nature of Batman's armored costume, the joints are very well hidden. 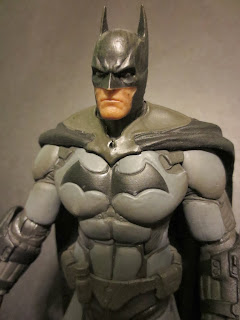 Every time I look at the sculpt I find myself more and more impressed. It's just incredible and so full of detail that you can't help but feel like Batman just appeared right out of your television screen. If I have one complaint it's that the head might be a little small, although I feel like that is fairly faithful to the game's style. The headsculpt though? Amazing. This might just be my favorite Batman headsculpt ever. It's not exaggerated with a teeth bearing scowl, but no one could mistake this Batman as being in a good mood. The mask does show Bruce's actual eyes through the cowl and it really nails a piercing stare. The armor that covers Batman's body looks great. It looks like multiple separate pieces while managing to not look overly busy and distracting. The utility belt is a little plain, but it does have some pouches and interesting pouches on it. And the gauntlets? They're excellent! They're really wicked and functional looking and manage to be nice and straight (warped gauntlets on Batman figures are nothing new). 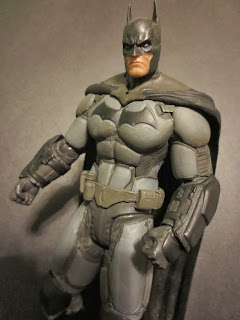 Overall the paintwork is fantastic, but there are a few problems that keep this from perfection. I think I'm going to whip out the ol' compliment sandwich here. There's lots of nice detail work on this sculpt. The seams between the panels as does the dry brushing on the cowl. Really impressive stuff. There are some oddities, though. First, the face looks less stubbly and more like it's covered in grime or soot. Maybe this is leftover from Batman's fight with Firefly? The tip of my Batman's nose on the cowl is also missing a bit of paint. Lastly, it looks like the something happened with the cape. It's actually molded in gray plastic and painted black, meaning that since it's soft and flexible some of the paint rubs off pretty easily. This isn't as big of a problem under the cape, but the visible back of the cape also suffers from this problem. Overall, I do think this is one of my favorite Batman outfit designs, though. I love the look of the gray and black together. The black gives it a grounded, real world look while the gray helps to give the suit some much needed variation that keeps it interesting to look at. 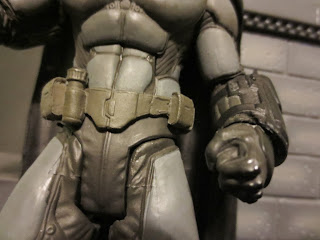 I'm a little disappointed that no accessories are included here. Batman should be the easiest character in the world to create accessories for, but it seems that far too often companies neglect to do it. All of the Arkham games have been very heavily focused on Batman's vast array of gadgets and DC Direct/ DC Collectible has been really good about including some of those with each Batman release. This guy, though? Nothing. 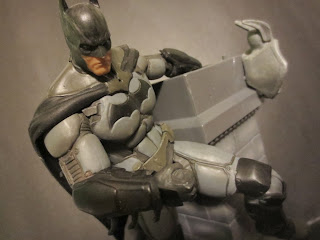 I really like this figure. In a year when we've had a steady stream of good Batman figures, the Arkham Origins Batman definitely stands out. He's not the only Arkham Origins Batman out there, though: Mattel released their own version of this character back in November but he now seems pretty difficult to come by. While I don't own that version, from everything I've seen, heard, and read, the DC Collectibles Batman seems to be the better choice. While I lament the paint problems with his cape and his lack of any accessory, he's probably in my top ten list of favorite Batman figures in the 6-7 inch scale. I'm giving him a Great and I do hope his excellent articulation is indicative of the work that DC Collectibles will produce in the future. Their Arkham inspired lines seem to keep coming and I couldn't be happier. Now I want to see the rest of the assassins from Arkham Origins and a Dr. Harleen Quinzel action figure. Wouldn't that be fantastic?

While Big Bad Toy Store is sold out of this guy, they've got plenty of other Arkham Origins figures and preorders available now. I've also reviewed the following figures from the Arkham Origins line: