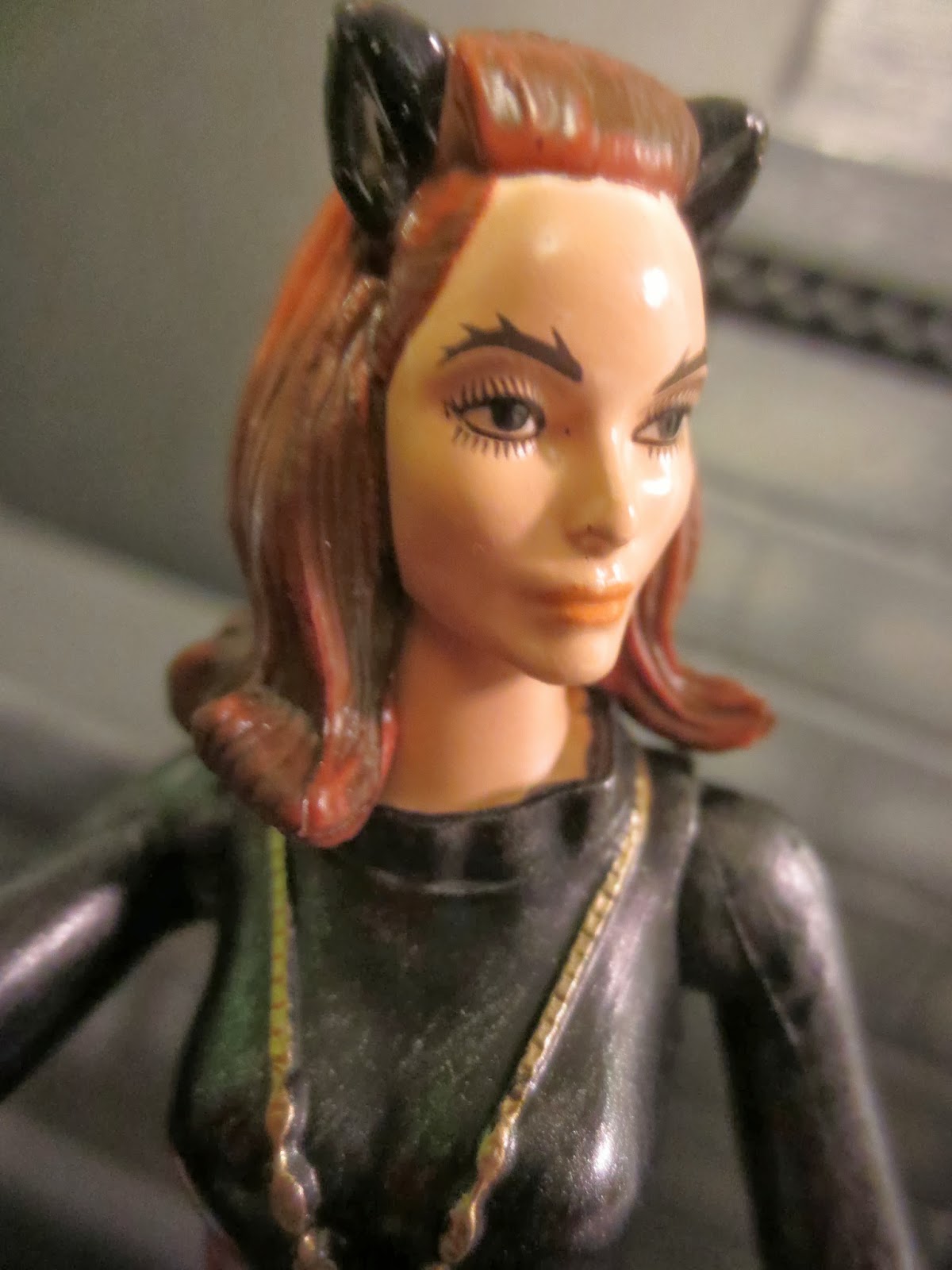 Finally! I've come around to reviewing Catwoman from the Batman: Classic TV Series line by Mattel. This line has definitely had its ups and downs, but the more time I've spent with it the more I have grown to appreciate most of the work Mattel put into it. I don't think anyone who collects toys could seriously call this a high end collectors line but it's certainly more interesting than many mass market retail lines we see. Since three different actresses played Catwoman during the time (Eartha Kitt in season 3 and Lee Meriweather in the tie in 1966 film), it seems that Mattel chose the most recognizable actress, Julie Newmar, who played the character during the first two seasons. While Michelle Pfeiffer is hands down my favorite Catwoman ever, I don't think it's an exaggeration to say that Ms. Newmar is without a doubt the most gorgeous Catwoman we've seen. When you think about the list of actresses portraying Catwoman, that's high praise indeed. If you're interested, you can actually visit Julie Newmar's website and order a personalized, autographed picture of her as Catwoman for around the same price you might pay for this figure. Pretty cool, huh? Ready for a look at Batman's flirtatious and feline femme fatale? Then join me after the break... 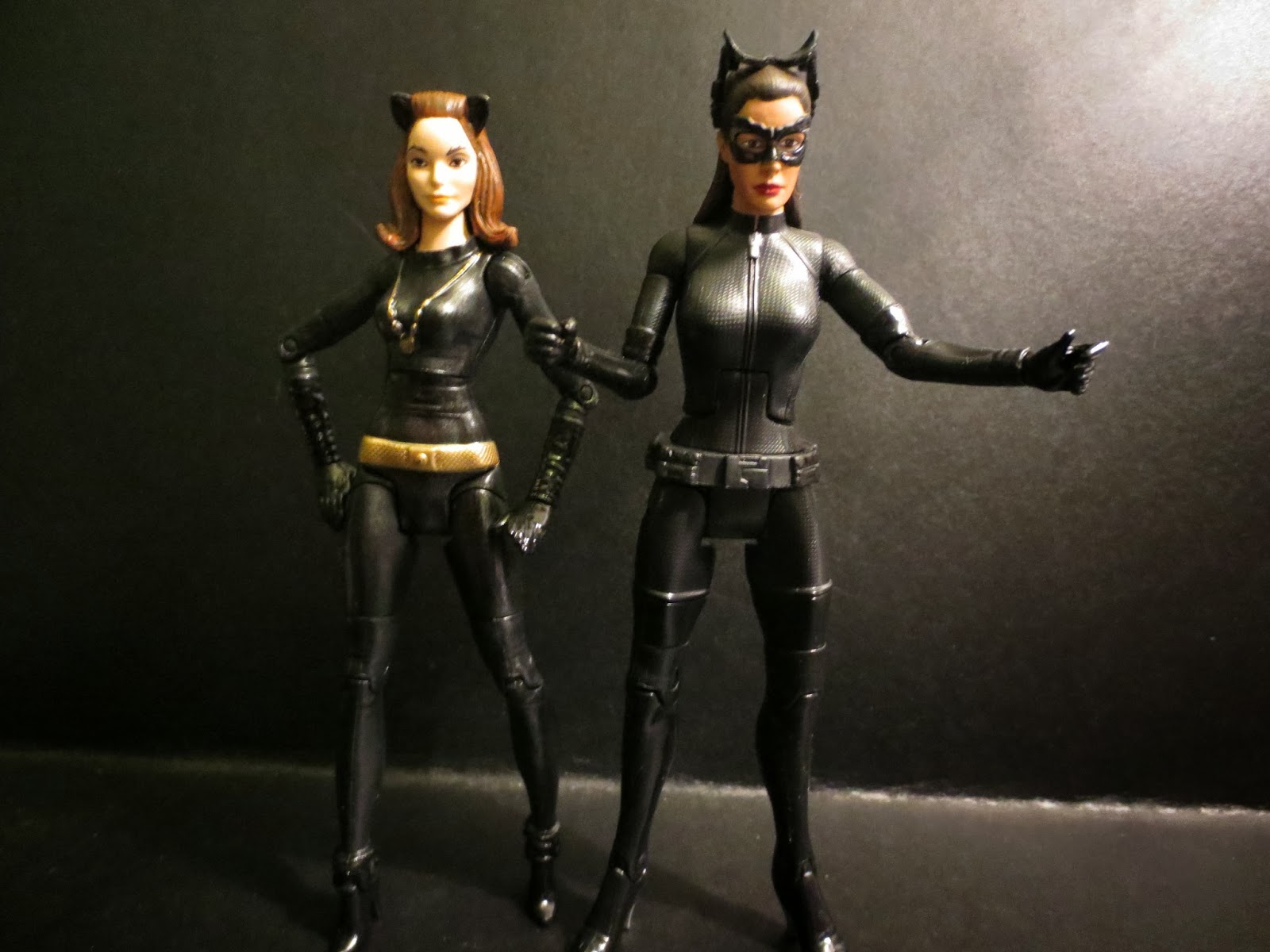 Julie Newmar was 5' 11" when filming Batman so the figure's height of just a hair over 6 inches makes sense with the scale of this line. Not only does she have a great hairstyle, but she's also wearing heels which adds a little height. Like the rest of the figures in the line, Catwoman looks like she has a little bit of caricature in her sculpt. The way Mattel sculpted and painted her face kind of puts me in the mind of a Barbie doll version of Newmar's Catwoman with a 1960's style. While heavily articulated female figures are often either overly fragile or awkward looking due to the articulation breaking up the sculpt, I think Mattel did a pretty good job of preserving of Catwoman's curvy form while still keeping her fairly agile. She features hinged ankles, hinged knees, swivel thighs, H-hinged hips, a swivel torso, swivel/hinge shoulders, swivel biceps, swivel wrists, and a ball jointed head. Most of the joints have the range of motion you would expect to allow Catwoman to slip into all kinds of slinky poses although her heels do make it difficult for her to stand. 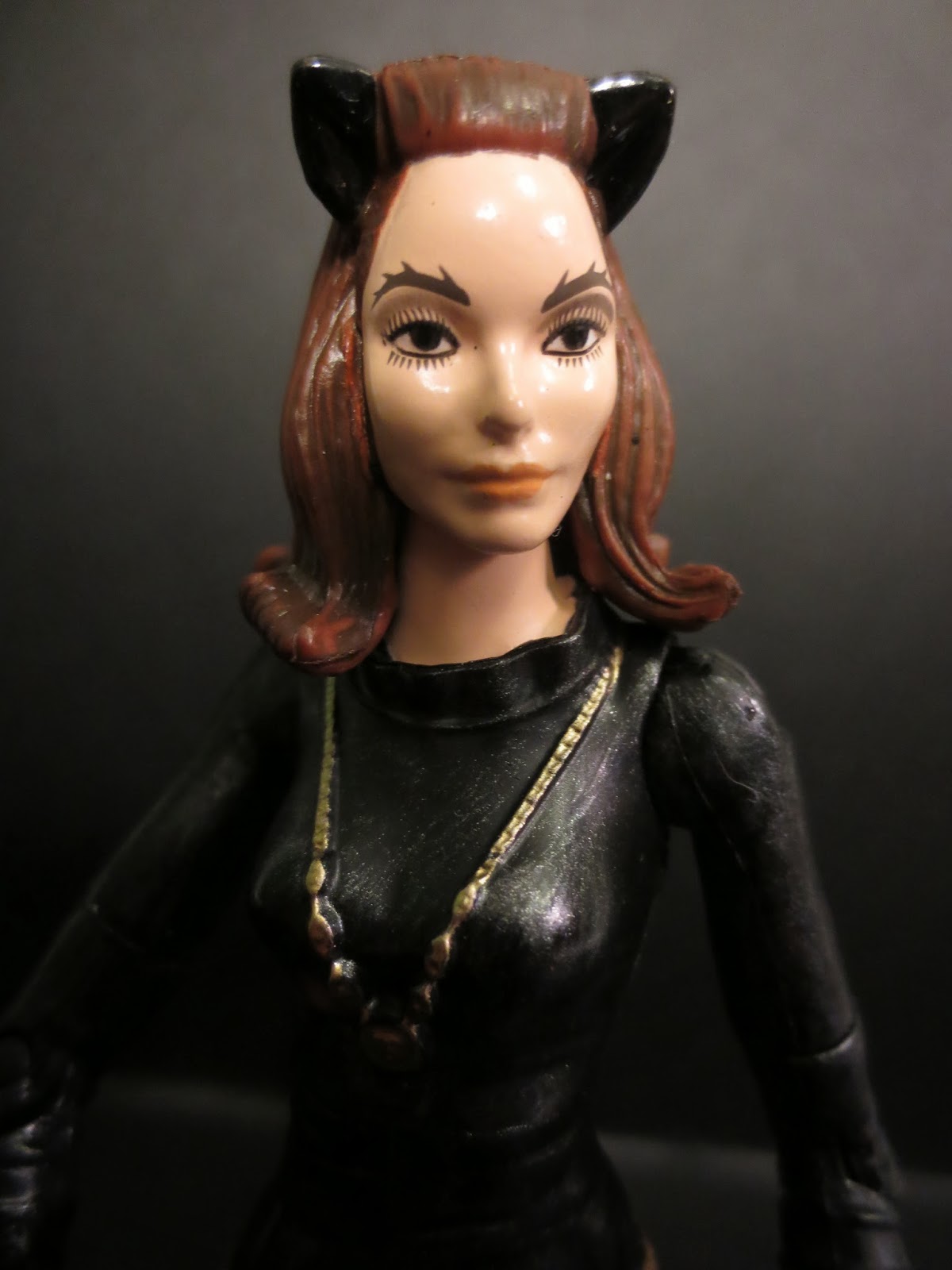 Since Mattel created unique body sculpts for each character in this line the figure is incredibly accurate to Newmar's outfit from the series. There are lots of tiny creases and folds in the outfit and the details like the belt, necklace, gloves, and boots are clearly sculpted to look like separate elements and not just painted on like most DCUC figures. The only thing weird about the boots is that they make Catwoman's feet look really, really small. Not dainty, but like someone bound her feet when she was a kid. Her hair is pretty spot on, though, and while the face looks like a Barbie doll version of Julie Newmar's Catwoman, it definitely resembles her. 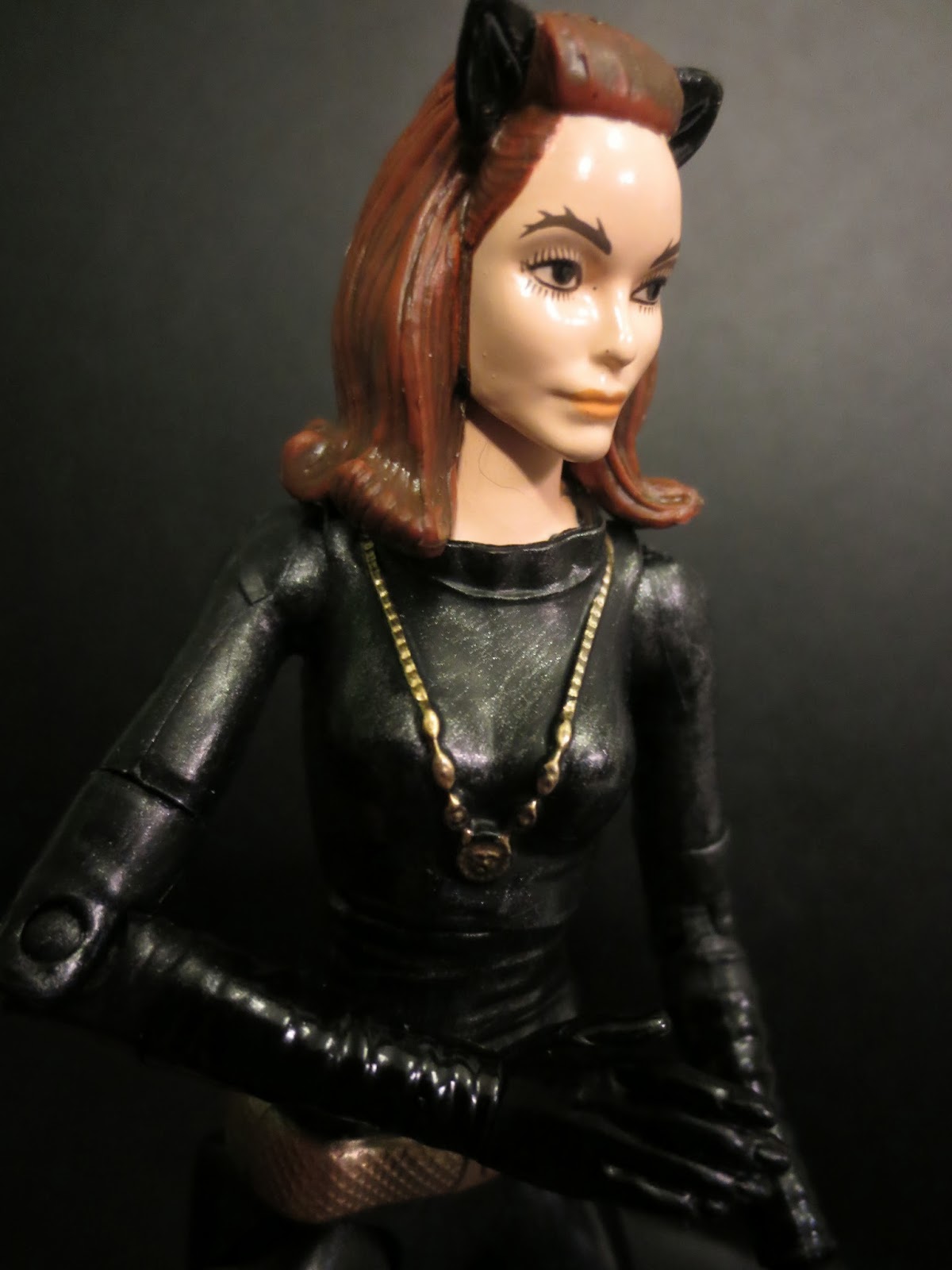 Julie Newmar actually created her Catwoman costume herself. She crafted it from black Lurex, a metallic yarn that gave the outfit its glossy sheen. The paintwork on the figure really nicely captures this as while the figure is mostly molded in black plastic there does appear to be a coat of a reflective silver paint over the costume. It's a fantastic effect. Her belt and necklace are pretty cleanly applied and the makeup and paint on her face is also excellent. Once again, very doll-like but definitely recognizable. 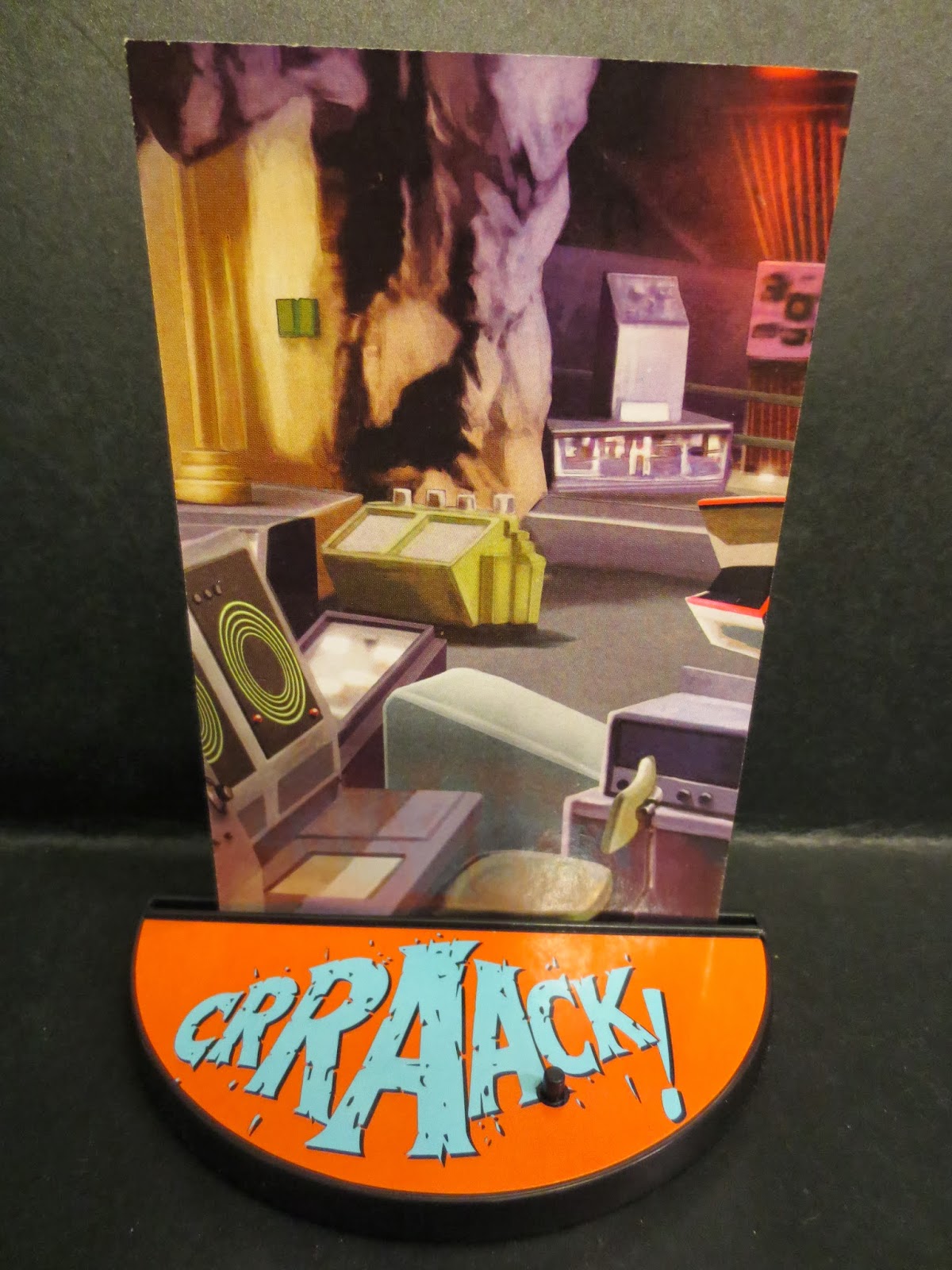 Ready for the same song and dance again? OK, here it goes: While Catwoman doesn't come with any handheld accessories, she does come with the same semi-circle stand as every other figure in this line as well as a double sided trading card. Catwoman's stand has a sticker on it that says "CRRAACK!" and her trading card shows another part of the Batcave diorama on one side and a painted portrait of Catwoman taunting a restrained Batman. I always love stands, but I do wish she had come with a whip or something, too. 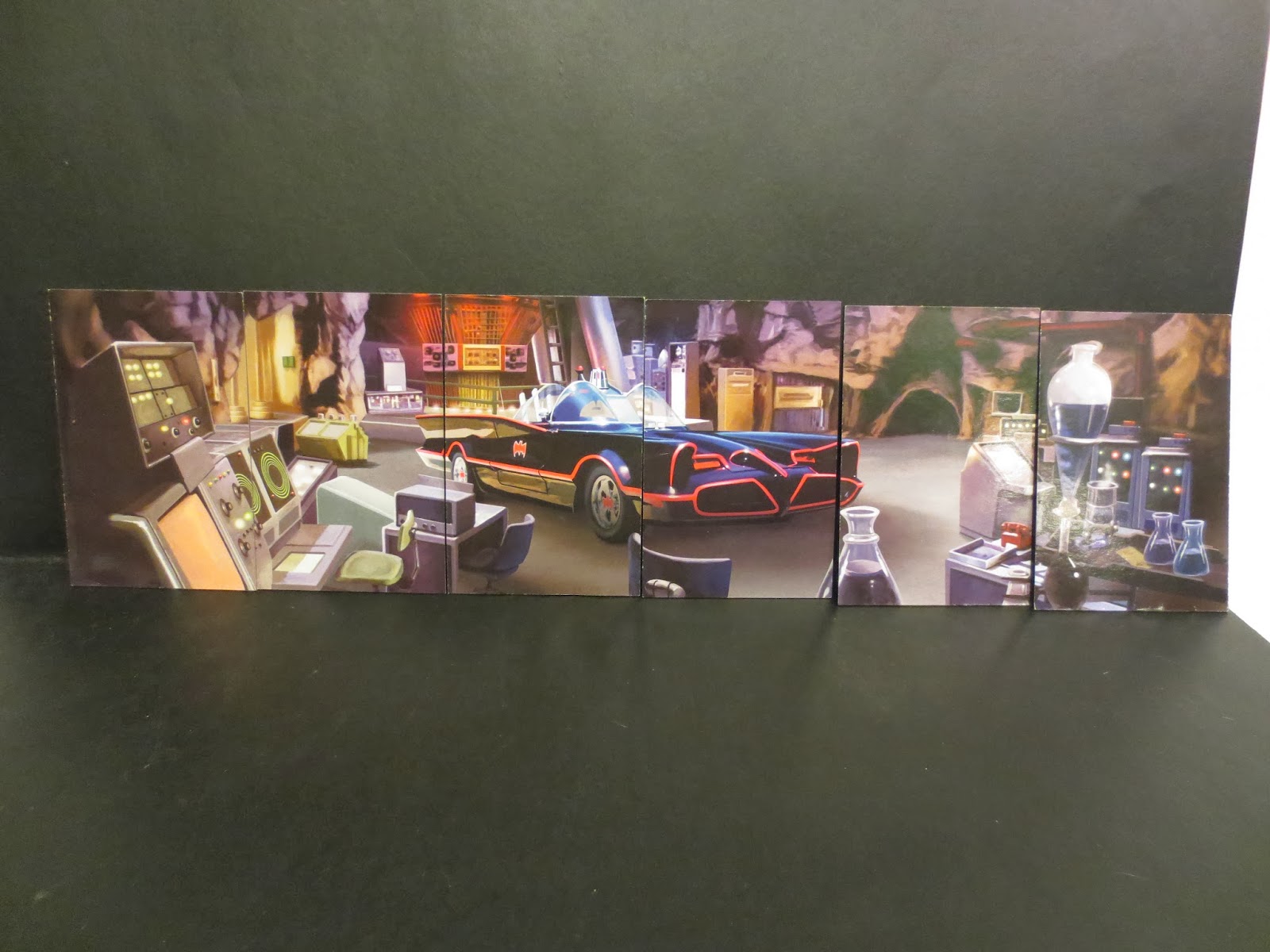 I haven't really covered this in any of the other reviews, but since I now have all of the figures I'll cover the Batcave diorama that came with each figure. They're simple pieces of hard, glossy cardboard, but when put together they make a diorama that you can place behind your figures. They look pretty cool together but here is no way to display them together using the included stands. The cards aren't the same width as the stands (the stands are wider) and since the stands have lips on the sides of the card slots, you can't display them in a row. You'll either have large gaps on the sides or you'll have to find another way to display these. It would have been a neat feature, but Mattel clearly put little thought into its execution. 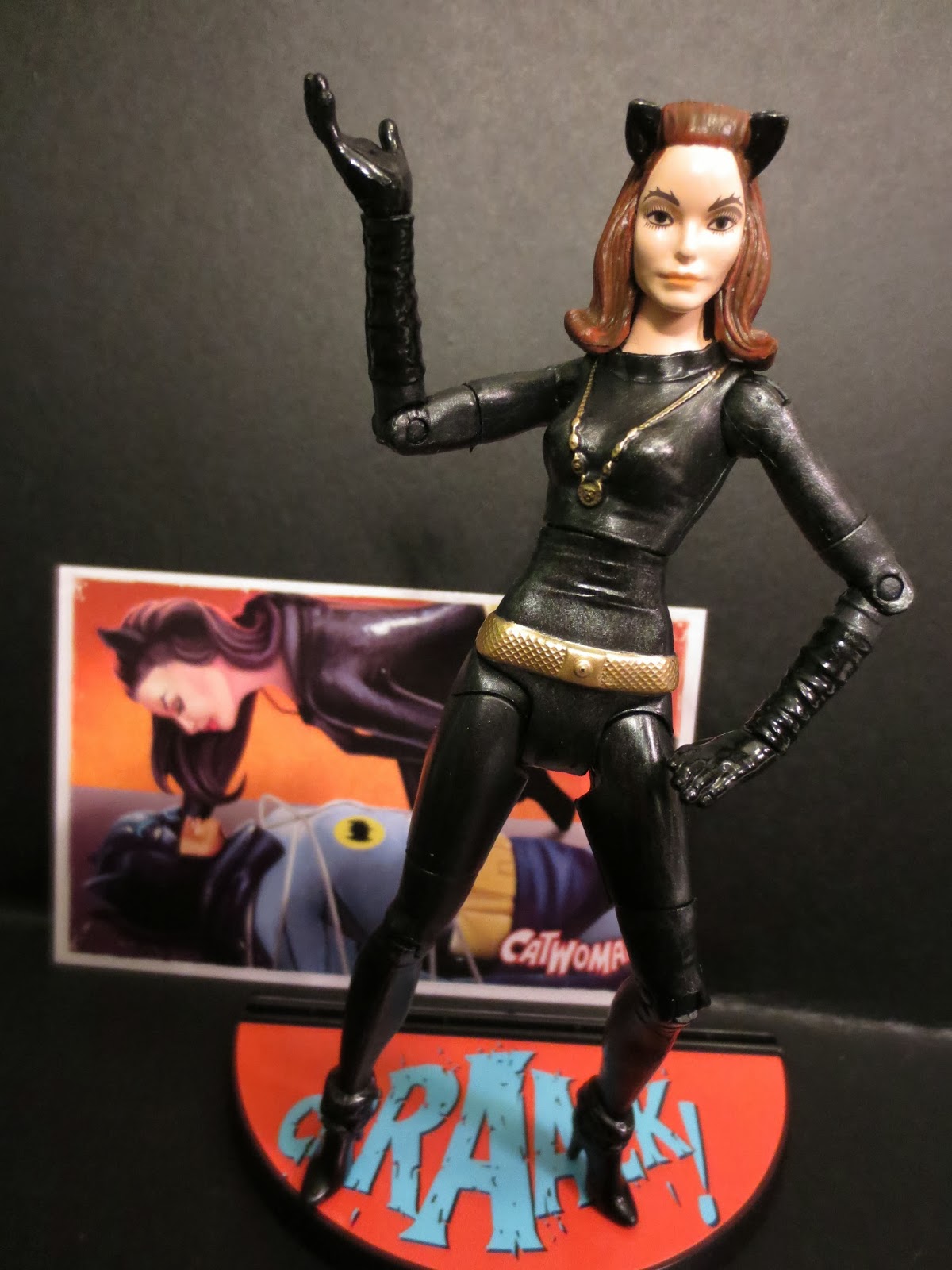 Maybe because it's a great figure, maybe it's because it's Catwoman, or maybe because it's Julie Newmar, but I really like this figure. I still think that Penguin is the best overall figure in the line while Surf's Up Batman is the best representation of what this line is about, but I'd put Catwoman third on the list of the best figures in this line (I haven't reviewed the Batman and Robin two-pack nor the SDCC figure). She's really quite nice and a great Catwoman that represents a different era of the character. If Mattel ever gets around to releasing a Michelle Pfeiffer Catwoman in this scale, I'll be thrilled and feel that I'd never need another Catwoman figure again. Of course, that doesn't mean I'll stop buying them... 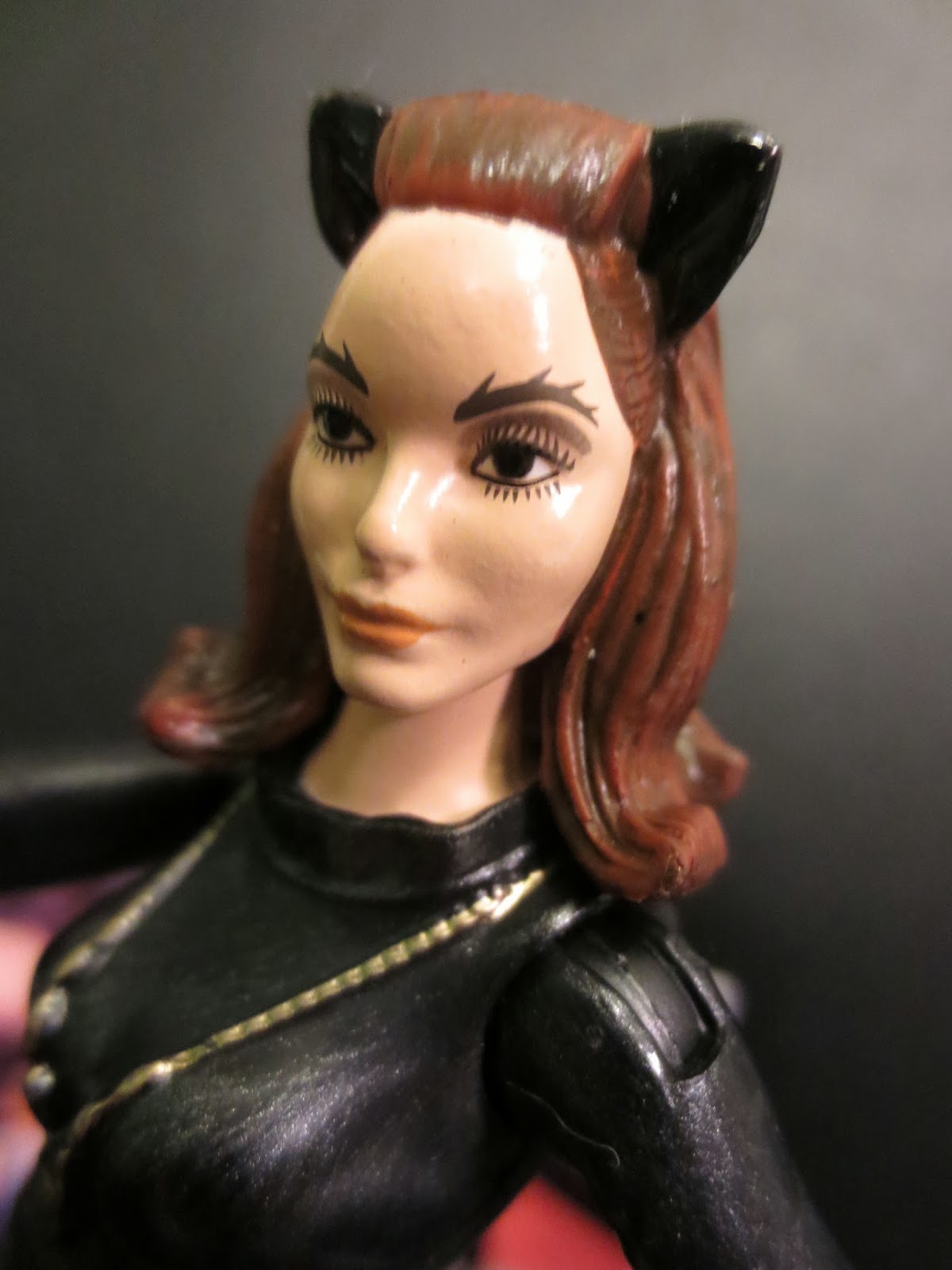 Do you need a Catwoman in your life? Head on over to Big Bad Toy Store and pick one up before she disappears for good!
Here's the rest of the line that I've reviewed in order of my favorite to least favorite:


The Penguin
Surf's Up Batman
Catwoman
The Riddler
The Joker
Batman