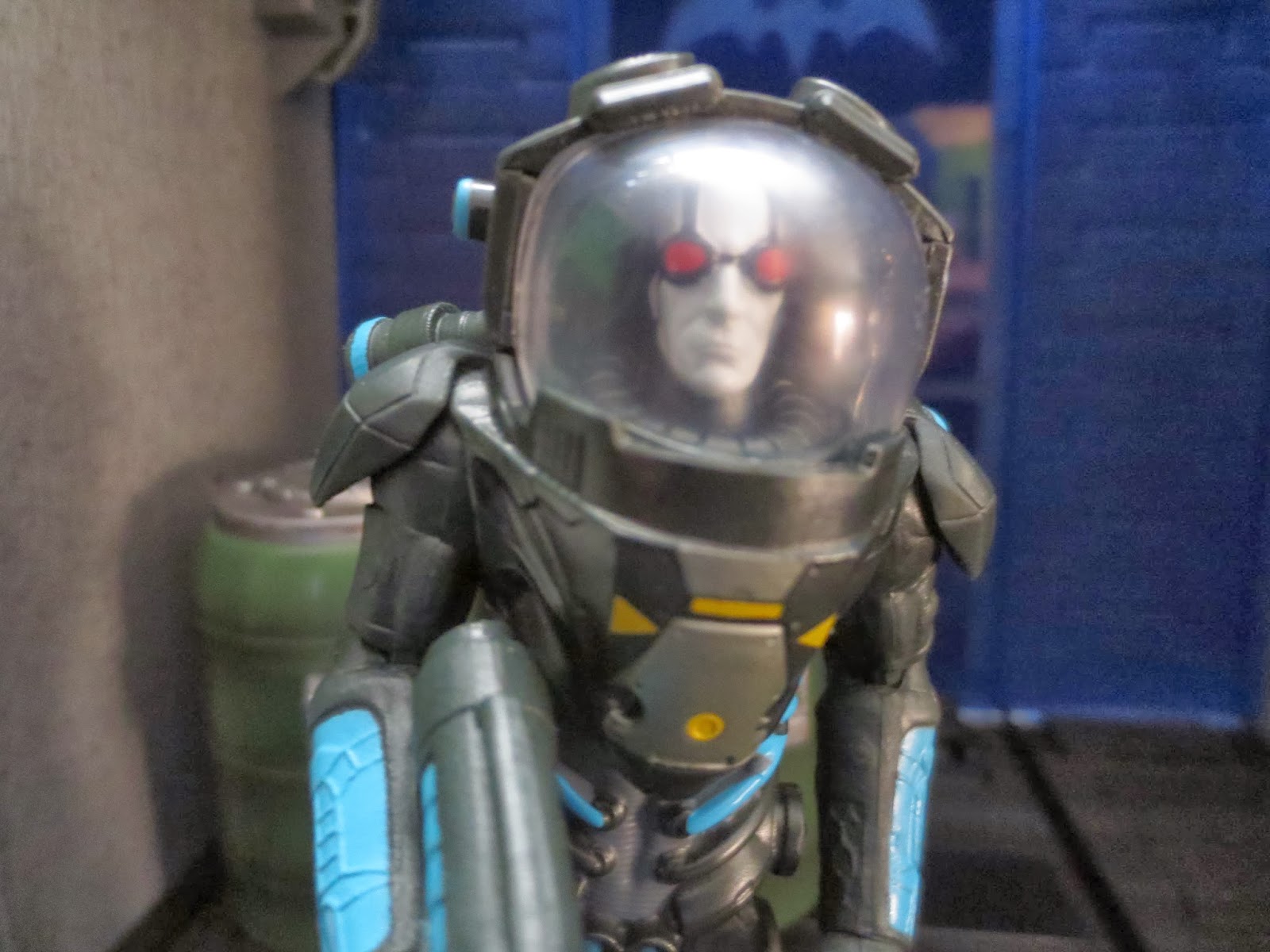 It's been quite a few years since Mattel's DC Infinite Heroes line was canceled, and while DC Collectibles has released a few convention exclusive 1/18th scale figures and the Injustice: Gods Among Us two-packs, there hasn't been much else for DC Collectors in the scale. Interestingly, Mattel's newest line, DC Comics Multiverse, isn't based on comic representations of the characters but on video game and film interpretations. So far it appears that we're getting figures from the Arkham games and soon we should see figures from Superman 2 and the Burton Batman films. I have some thoughts about this line overall that I'll save until the end of the review as first I'll talk about the Arkham City Mr. Freeze. Arkham City was a fantastic game that surpassed the original and was filled with plenty of high points. One of these was a fantastic battle between Batman and an amazingly redesigned Mr. Freeze. Honestly, Freeze's redesign and appearance in Arkham City was probably the most exciting thing to happen to the character since the Mike Mignola redesign and his appearance in the Batman: The Animated Series episode "Heart of Ice". Freeze is such a fantastic character and it's a shame that so many people immediately associate him with Batman & Robin. Let's try to clear that abomination from our minds as we look at this figure, shall we? 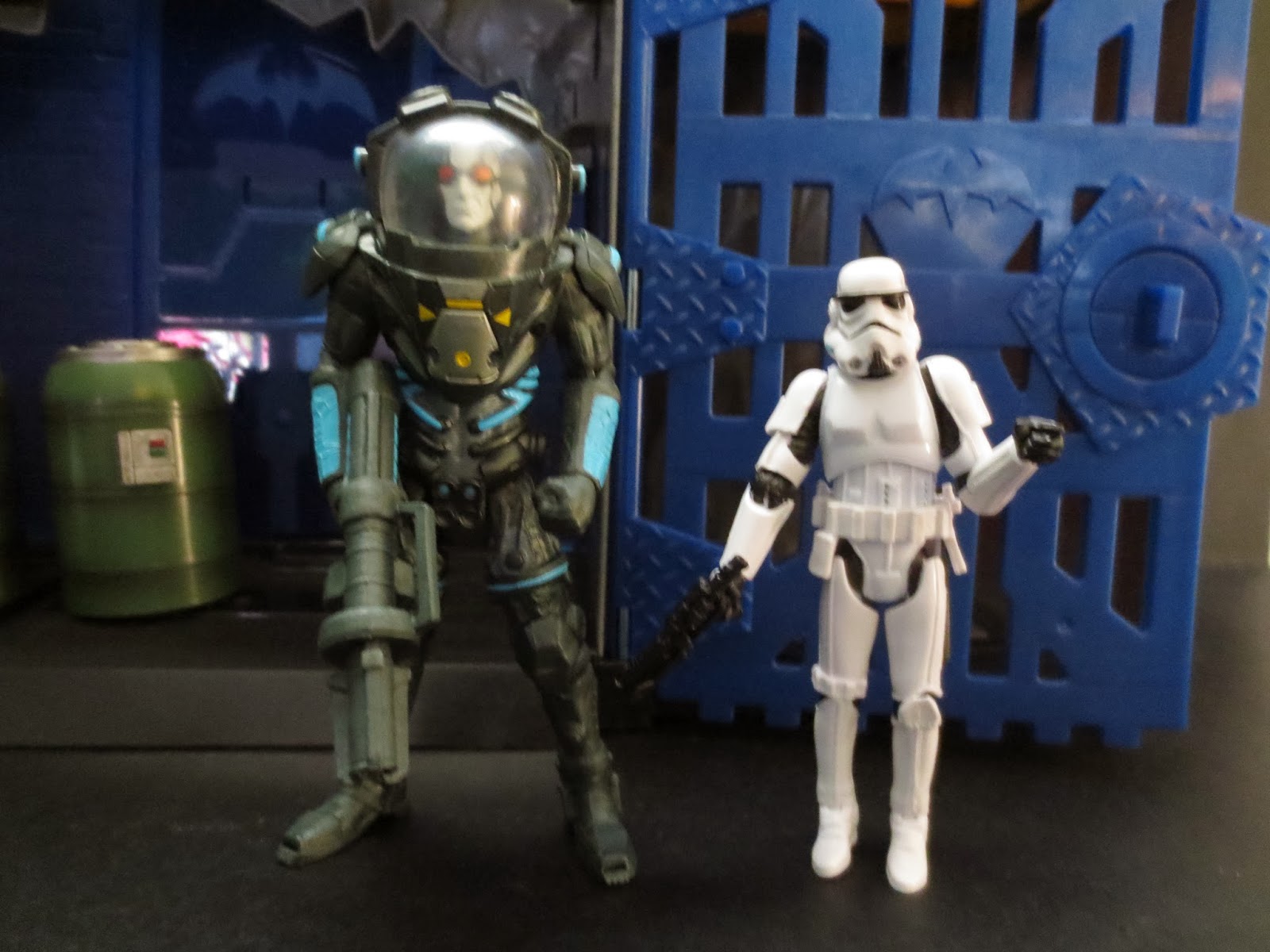 It's so confusing to talk about 1/18th figures because while many collectors call them 3 3/4 inches, most of them really aren't that small anywhere. Other than Hasbro's Star Wars figures, most of them have just gotten larger and larger. Mr. Freeze stands about 4 1/2 inches tall. Granted, he's often portrayed as a pretty big guy, plus he's in a containment suit that looks like it adds quite a bit of size, but that's still a pretty large figure. He doesn't look wildly out of place next to something like a modern G.I. Joe, but he definitely seems imposing. I don't own any other Multiverse figures to compare him with, unfortunately. The style seems to match the video games nicely and while this is a bit simpler of a sculpt, it does feel like a smaller version of a DC Collectibles figure. 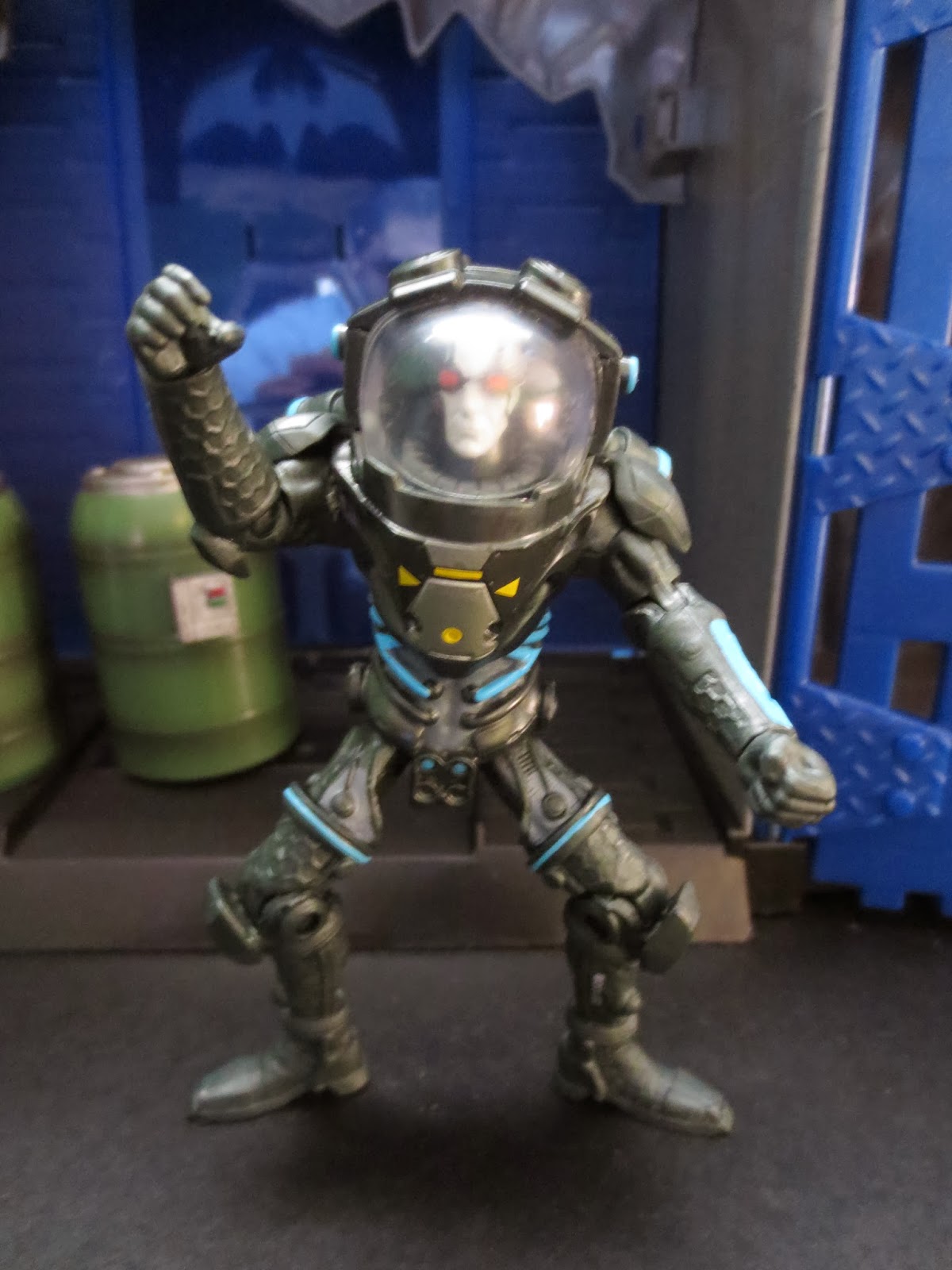 Mr. Freeze is probably not the best example of the line's standard articulation because he is encased in a giant suit of armor. He features: hinged knees, swivel thighs, h-hinged hips, a swivel torso, swivel/hinge shoulders, hinged elbows, swivel wrists, and a ball jointed head that you can't reach without "breaking the figure."  Other than maybe some ankle articulation and bicep swivels, I can't think of anything else I really feel the need for on this guy. You can get a few decent poses out of him which is about all you need for Mr. Freeze in this giant suit. The joints feel really nice and tight and very sturdy, so that's a plus. He has some cool shoulder pads that are just a bit soft which allow for his arms to move fairly unimpeded, so that's another plus. 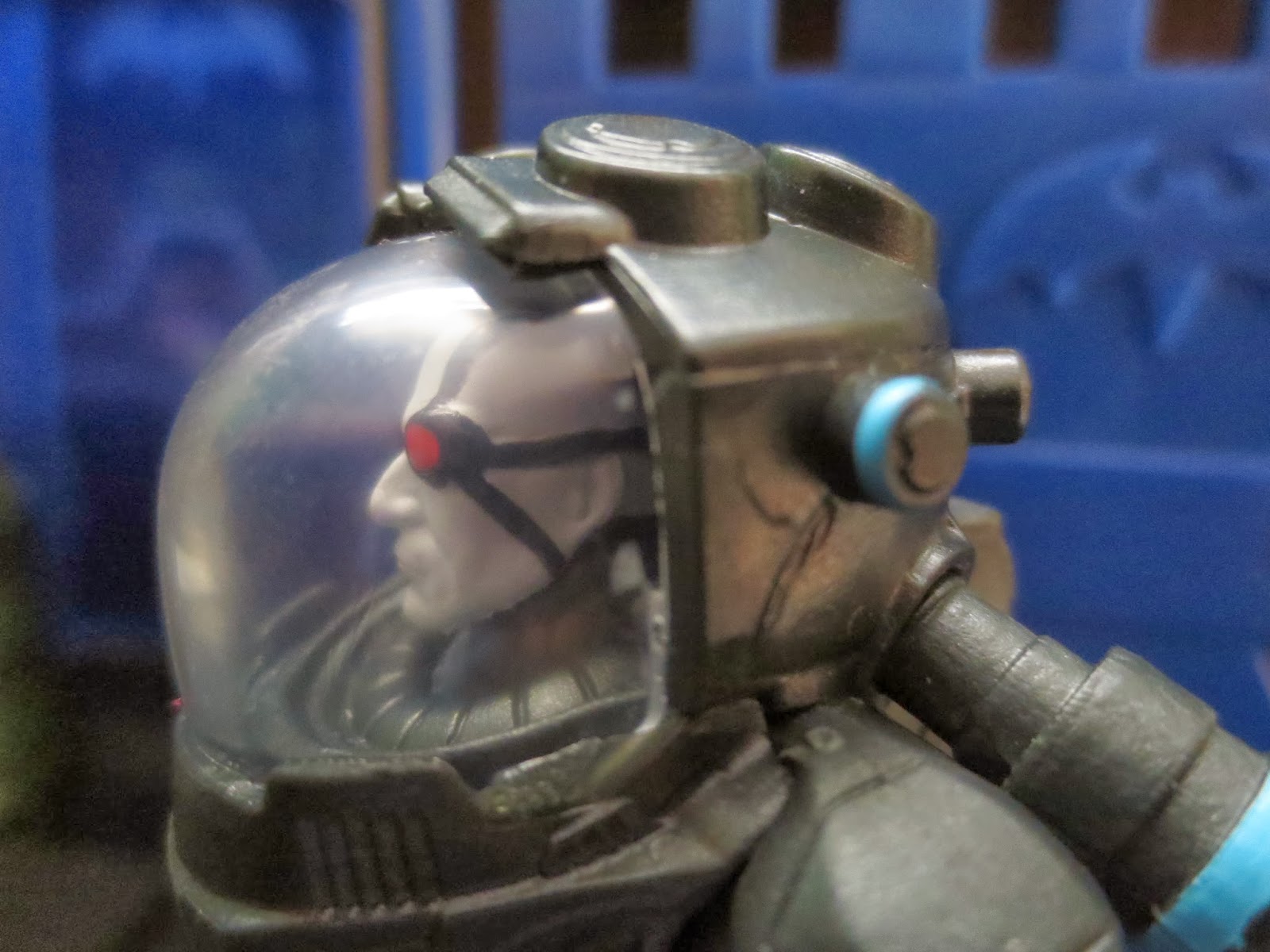 I'll mention here that the figure I'm reviewing is actually the second copy of this figure I've owned. The first figure was defective and had to be replaced due to missing a row of pipes on his back and having the top of his helmet partially detached. That's why I mentioned the ball jointed head that couldn't be moved without "breaking the figure" above: since the top of the helmet wasn't fully glued down, I thought it was removable and would allow for access to pose the head but it was just a fluke. If you really wanted too, though, you could potentially very carefully remove the glue from the helmet's top, allowing you to pose the head. Just be careful and know I'm not responsible if you break it. That's on you, hoss. 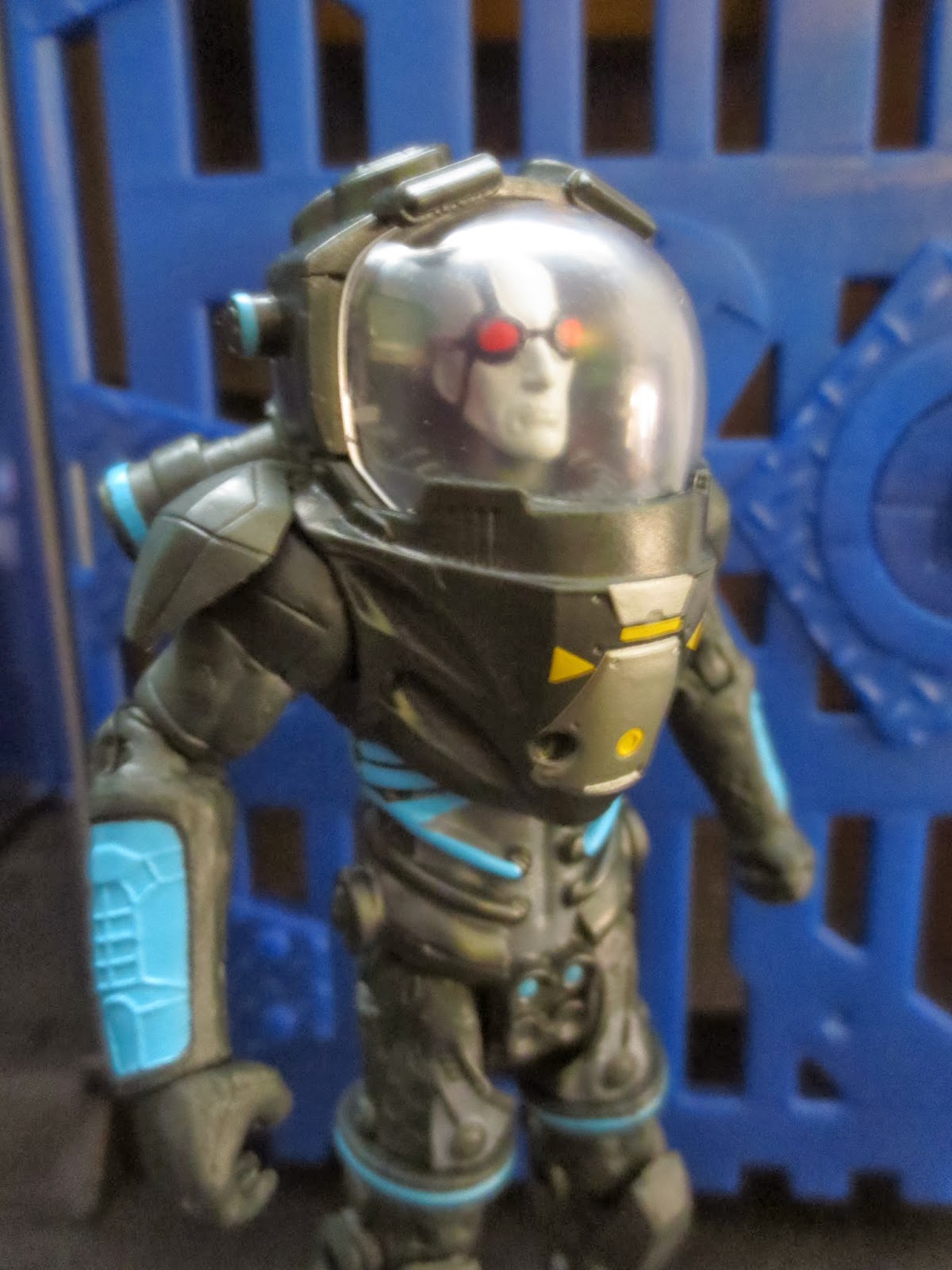 Sometimes 1/18th figures from companies other than Hasbro are atrocious. Mr. Freeze is not. He's a really nice figure with a lot of good detail his outfit is just covered with knobs, pipes, bolts, and armored plates that look just fantastic. While he's certainly not as detailed as the DC Collectibles version of this guy that's over 7 inches tall he's definitely on par with pretty much any other 1/18th figure. There is some phenomenal texture work on the different parts of his suit that is really impressive and certainly makes this figure feel like a serous contender in the 1/18th scale rather than a cheap cash in. My only complaint is that his clear visor is a bit cloudy on the inside and I can't see his head as well as I'd like. It's a minor nit, though. 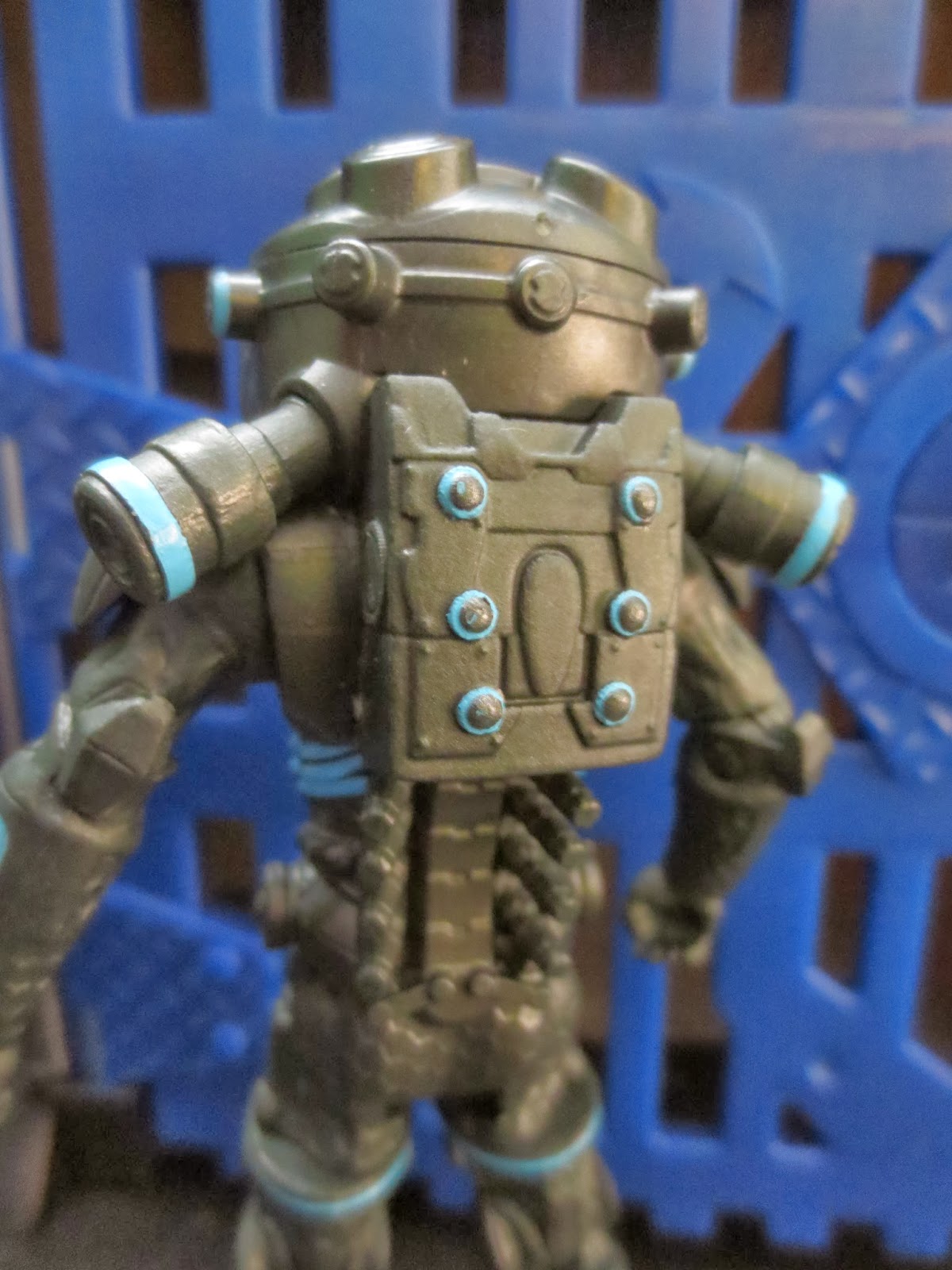 The paint work is really good from the thighs up. Below that Dr. Fries is simply molded in a grayish plastic but above that there is an impressive amount of paint work, especially for a mass market action figure in this scale. His various pipes and tubes feature a mixture of blue and black paint details while gray, black, silver, and yellow paint details add color to his under-suit, chest armor and helmet. Even the head looks neat and clean. I'm impressed as sometimes 1/18th scale stuff seems like an opportunity for companies to really cheap out. Not so here. I'm as shocked as you are. 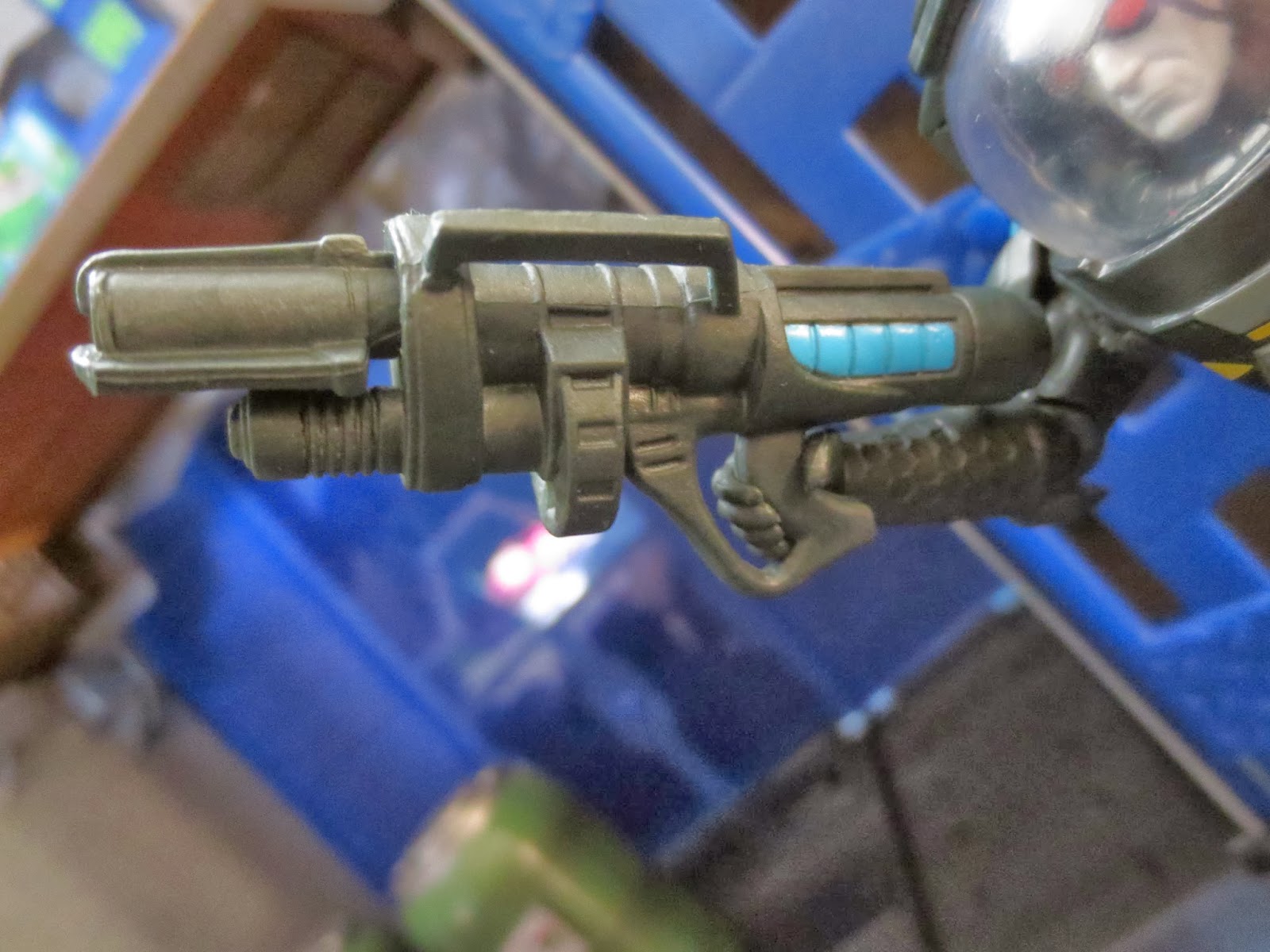 Freeze comes with two accessories. Kind of.  First he comes with his freeze cannon. It's a fantastic accessory that he can hold in his right hand and wield menacingly. It's fairly large, features some nice paint apps, and is really well sculpted. Freeze's second accessory is less a true accessory and more of a piece of the figure that needs to be attached. It's his backpack, but once you attach it it cannot be removed (you know, without pliers or a hammer or something). Overall, I think Freeze came with everything he needed from his appearance in the game, so I consider this category a success. 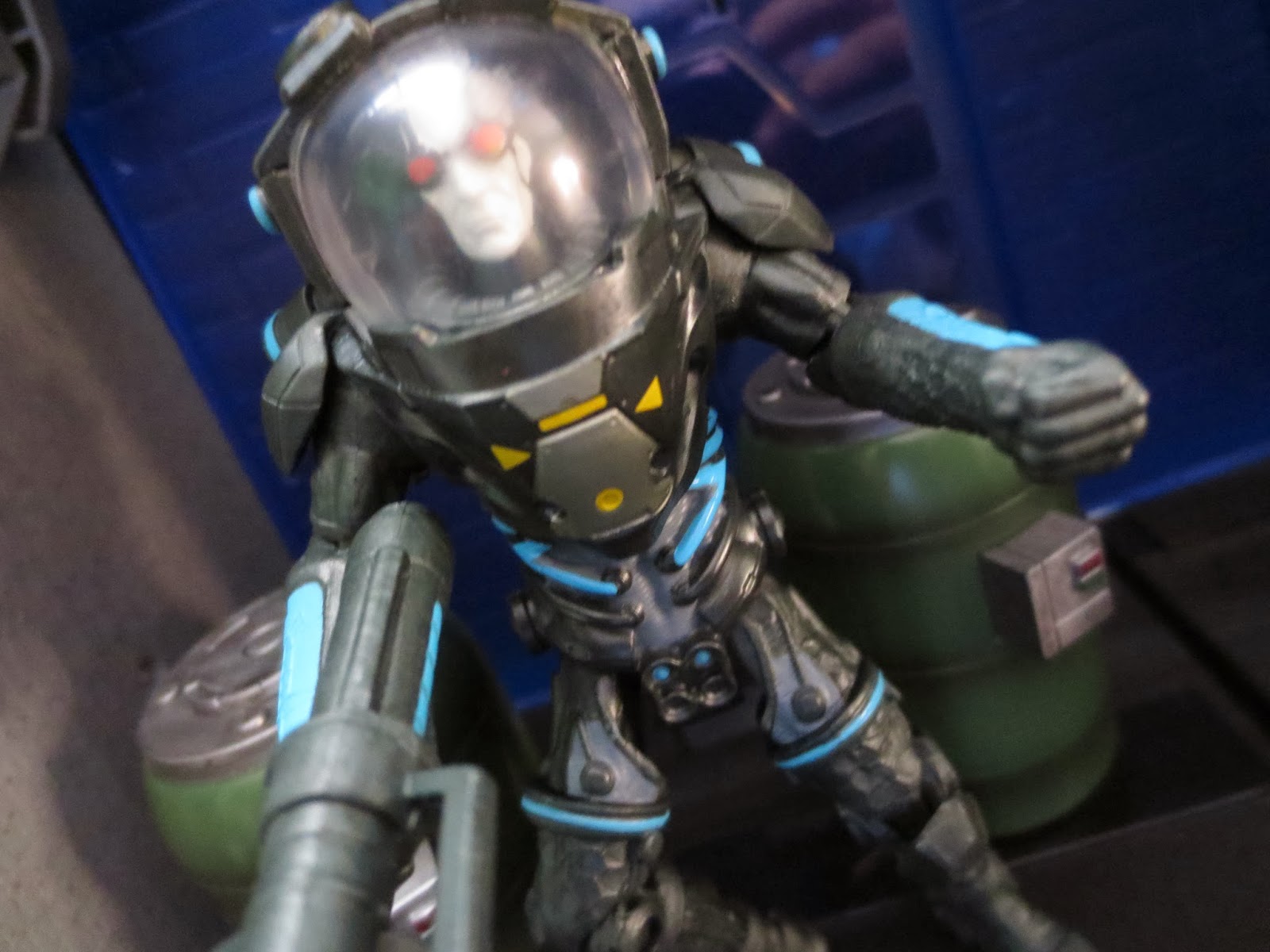 I really like this guy. A lot. I've always been a fan of Mr. Freeze and am really pleased with how well this guy turned out. He's definitely a step above the Infinite Heroes and is more in line quality wise with some of Hasbro's Star Wars offerings. That's high praise, indeed! Unfortunately, the fact that my first figure was missing a row of pipes on his back (they're a separate piece that seems to be glued into the figure) has soured me a little bit, but not too much. If I were reviewing that first figure, he would have probably gotten a Good, even with his flaws. This guy, though, I'm giving a Great and a 1/2 too. Averaging those two together (which is what I've done when I've had to replace a QC deficient item) gives him a Good and 3/4, but since no one on this site uses 1/4s except Generbeener, I'm rounding him up to a Great. I really like this guy and have to say that he turned out much better than I thought he would. I'm really looking forward to this line, even though it's a new scale for Batman stuff.

Actually, that's something I wanted to discuss a bit that has me a bit confused and a bit aggravated with Mattel: these figures are in a completely new scale and we're seeing figures released that we've never had in the 1/18th scale. It's frustrating because I have a massive Batman collection of 6-7 inch scale figures. Mattel has made some great Arkham City and Arkham Origins figures,  but will they fit in with the Arkham figures Mattel has already released or the ones DC Collectibles is continuing to release? No. Mattel is releasing a Michael Keaton Batman, but will he fit in with my Mattel Adam West  and Christian Bale Batman figures? Nope. I understand that the 1/18th scale is less expensive and comes in at a smaller price point, but if Mattel saw these characters as viable released, why were these guys not released on Mattycollector or in the Batman Unlimited waves in a scale that was consistent with what we already have? I can say that this will definitely have an effect on my buying habits. If Mattel offered a subscription of Batman based characters on Mattel in the 6 inch scale, I'd sub up in a heartbeat. Club Infinite Earths, though, was too much of a crapshoot for me and I probably only would have wanted three figures from the 2013 sub.

If you're wanting a Mr. Freeze of your own, stay inside where it's warm and toasty and pick one up from Big Bad Toy Store!