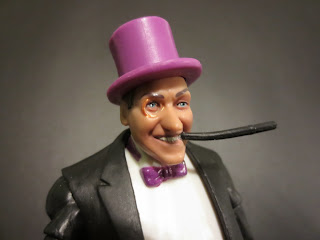 First appearing in Detective Comics #58 in 1941 and continuing to harass Batman and Robin on numerous occasions, The Penguin has certainly cemented himself as one of Batman's A-list villains. While Penguin seems to be a divisive member of Batman's gallery of rogues (some fans just don't like him), there's no doubt that he's extremely well know. Much of the character's A-list status can be attributed to his appearance in the 1966 Batman TV show where he was played by actor Burgess Meredith. Meredith took all of the crazy elements of the character (the odd behavior, birdlike laughter, obsession with birds and umbrellas) and really crafted what might be considered by many to be the definitive representation of the Penguin. While I have a fondness for Danny Devito's portrayal of the character and consider Gregg Hurwitz's Penguin: Pain and Prejudice to be the best Penguin story ever written, when someone asks me to think of the character Burgess Meredith is who springs to mind. What you might be noticing is that while I was initially very displeased with this action figure line (I didn't care for Batman) I've since come around on a few of the figures. Is Penguin going to be closer to the top of my list or closer to the bottom? Read on and find out! 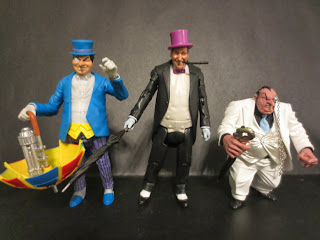 The Penguin stands around 6 1/4 inches tall, but a good 1/2 inch of that height is due to his top hat. He's a short guy and looks pretty in scale to his other villains from this same series. Honestly, with how short the Penguin has been depicted from time to time, you could probably use him with any 6-7 inch Batman line you wanted to. The more I'm looking at these figures, the more I like the style Mattel chose for them. They're not super realistic, but they're not overly stylized either; they're really somewhere in-between in a style that matches the caricatured nature of the 1966 television show itself. Batman was incredibly silly, campy, and over the top and I think that for the most part, these figures capture that feeling. 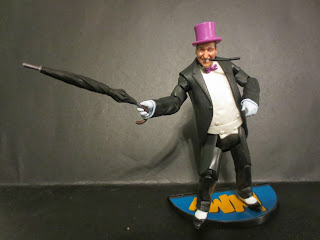 How much articulation does old Oswald Cobblepot really need? I'm quite pleased here as Mattel really managed to squeeze some nice articulation into Penguin's portly frame. He features: hinged ankles, hinged knees, H-hinged hips, a swivel waist, swivel/hinge shoulders, swivel biceps, hinged elbows, swivel wrists, and a ball jointed head. While the Penguin's not going to be winning any martial arts contests his arms and legs are nicely articulated as to give him the ability to attain some very dramatic poses, particularly when utilizing his umbrella. He can fence with it and even hold it with both hands. If I have a criticism of Penguin's articulation, it's that due to the way his suit and body is sculpted, certain joints like his swivel biceps and waist look very awkward when they're turned as the sculpt doesn't quite match up. 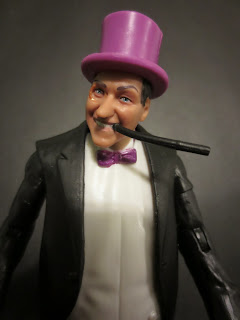 I really think the sculpt here is fantastic. Most of the Classic TV series Batman figures suffer from softer sculpts and look a bit more like caricatured versions of the actors, but Penguin is mighty impressive and might be the best of the lot. He really looks like Burgess Meredith in the role. Of course, he also has lots of detail on his face and head such as the long nose, the monacle on his right eye, and the top hat, which all help to add more character to the headsculpt. I really like the cigarette holder, even though it is a bit thick. Still, no concern with it breaking. The body is appropriately plump and awkward for the featherbrained foe! I think Penguin is certainly the most impressive overall sculpt in this line. 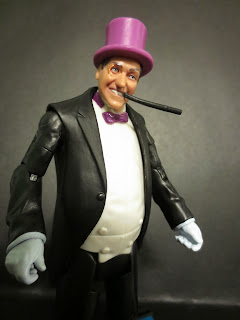 While all of the 1966 Batman figures have fairly simple mass market paint jobs, the Penguin still manages to look good. Some of the small detail lines might be a bit messy but I didn't notice anything that I felt was a real flaw. The face, particularly the eyes, is quite impressive. The suited body is fairly bland, but suited bodies often are. I do like the bow tie, though; it has a nice metallic purple paint job that looks great with the tophat. 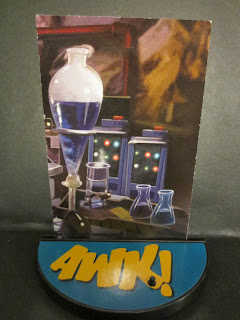 The Penguin is the only villain from this series that comes with an actual accessory. Sure, he comes with the same semi-circle base that every other figure comes with (his has a blue sticker with "Awk!" written in yellow letters) and a duel sided, over-sized trading card with a painted image of the the Batcave, but Penguin also comes with his umbrella. 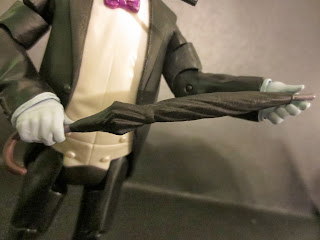 It's a closed black umbrella that fits wonderfully in his right hand. It even has a silver tip and a brown handle. I can't imagine the penguin not coming with this accessory, so I'm glad Mattel included it. He really looks great holding it out as a fencing foil! 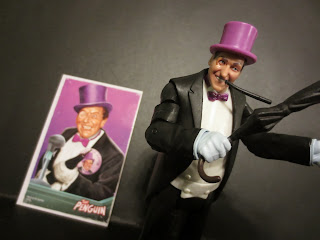 My feelings towards the Batman 1966 line have changed a few times. While I was initially looking forward to this line more than any other line this year, when I first saw the Batman and Robin 2 pack and bought my single carded Batman, I was incredibly disappointed. I honestly never really planned to pick up the rest of these figures as they just didn't wow me. I'm glad I managed to find them at a good price, though, as there are definitely some decent figures in this series. While Batman and Robin are a wash, The Riddler is decent and Surf's Up Batman is quite good. The Penguin is quite good, too. He has a great likeness, a really excellent sculpt, and much more articulation than I think we've ever seen on a Penguin figure. Honestly, I could see some Batman figures choosing to use this as their default Penguin figure as he's not just a great likeness of Burgess Meredith's iconic portrayal of the character, but also a great non-deformed Penguin. While some portrayals have taken the Penguin down the route of being a literal monster, others have kept the image of somewhat suave gangster who is just a little awkward. This figure captures that aspect of the character better than any that has come before. If there is one figure in this line worth scooping up, it's the Penguin. Easily a Great figure.

If you need a Penguin of your own, head on over to Big Bad Toy Store and pick one up today! Awk!