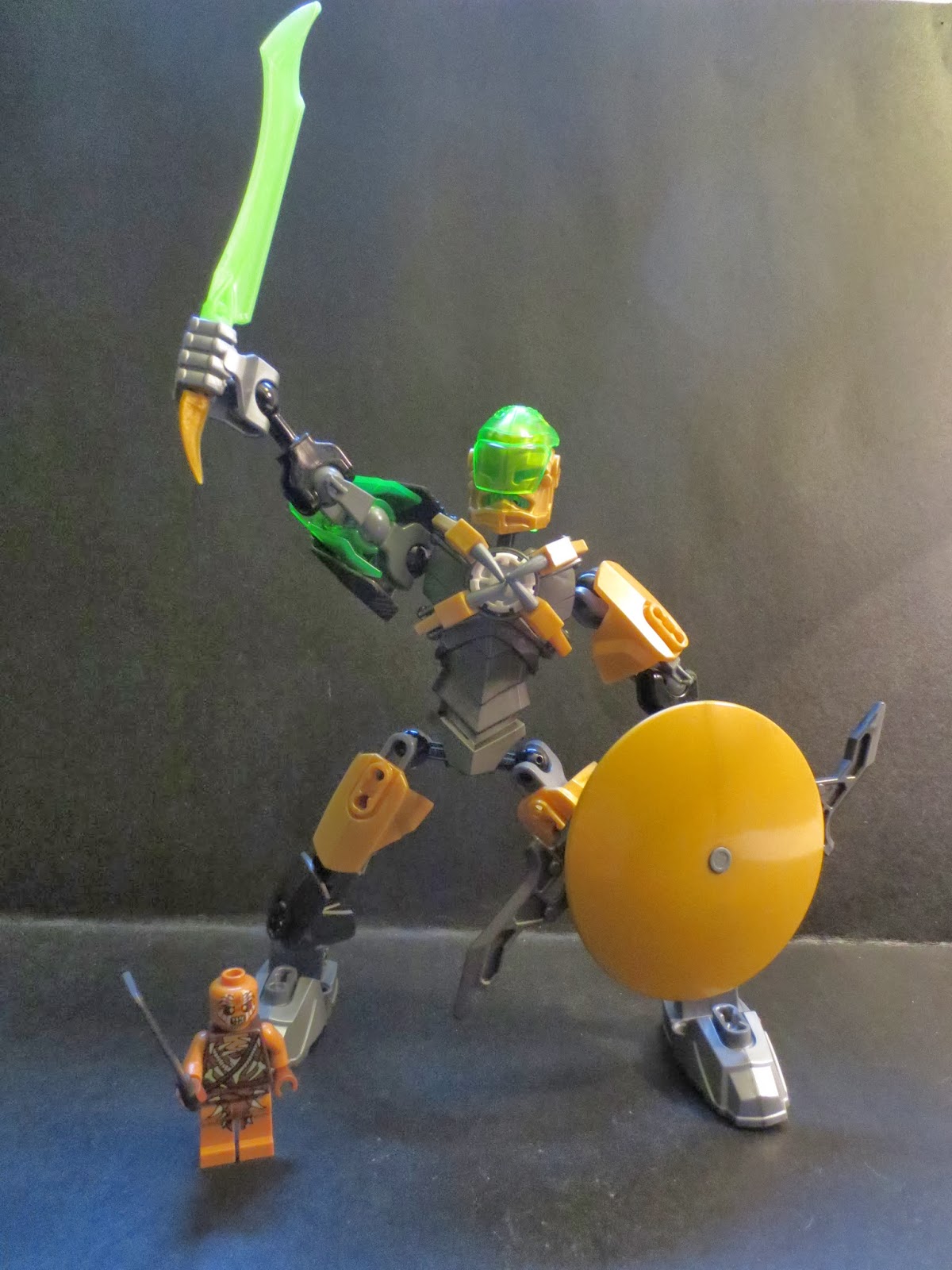 I really never got into Lego's action figure line BIONICLE and was not even aware that Hero Factory existed until a few months ago. It turns out that the Hero Factory line has been going since 2010 but it was this year's theme of Brain Attack that caught my attention. Apparently the heroes of the line are fighting some sort of evil alien brain parasites or something. Who knows? I was initially drawn to the bright green packaging of these guys but passed them by. When I stumbled across one of these guys at a friend's house, I decided to pick one up. I ended up snagging Rocka here and Bruizer, whom I'll review at a later date. If you're familiar with BIONICLE or Hero Factory, you'll know what to expect here: you actually build these guys from a number of non-traditional Lego pieces that utilize Technic pins and ball joints rather than the traditional Lego studs. Want to learn more? Then join me after the break... 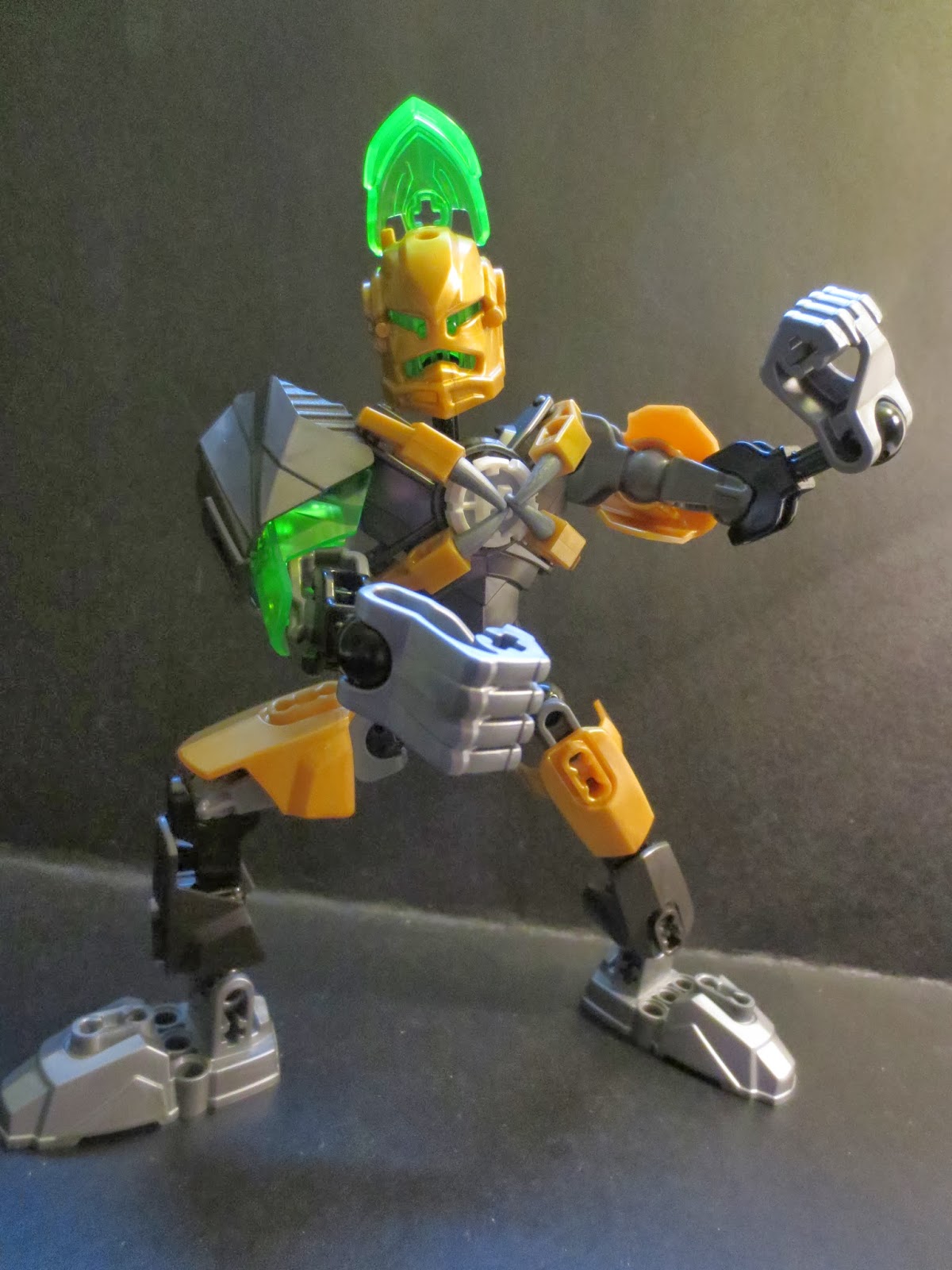 Rocka stands around 7 1/4 inches tall and is constructed from 43 Lego pieces. These figures have a very mech-like appearance to them versus looking like regular guys in armor. Since most of the parts are interchangeable, you can create multiple variations of the character or combine his parts with other sets to create endless unique and larger creations. Rocka is part of the basic assortment of figures and is packaged in a durable and reusable plastic bag that can be used later to store both the figure, his accessories, and his instructions. Nifty idea.


Since the majority of the joints are ball joints, Rocka features an amazing amount of articulation. He features: ball jointed ankles, ball jointed knees, ball jointed hips, 4x hinged chest clamps, ball jointed shoulders, ball jointed elbows, ball jointed wrists, a ball jointed head, and a hinged visor. These really are very fun figures to pick up and play with, especially if you enjoy twisting and contorting figures into all kinds of crazy poses. There's absolutely no concerns about joints and breakage here and you could play with this thing all day long. These are great figures if you're just wanting something to keep your hands busy while watching TV or fiddling around at your desk. The chest clamps flip out to allow you to remove and insert a small white disc called the Hero Core. I'm not sure what it's supposed to represent, but it's a neat feature nonetheless. 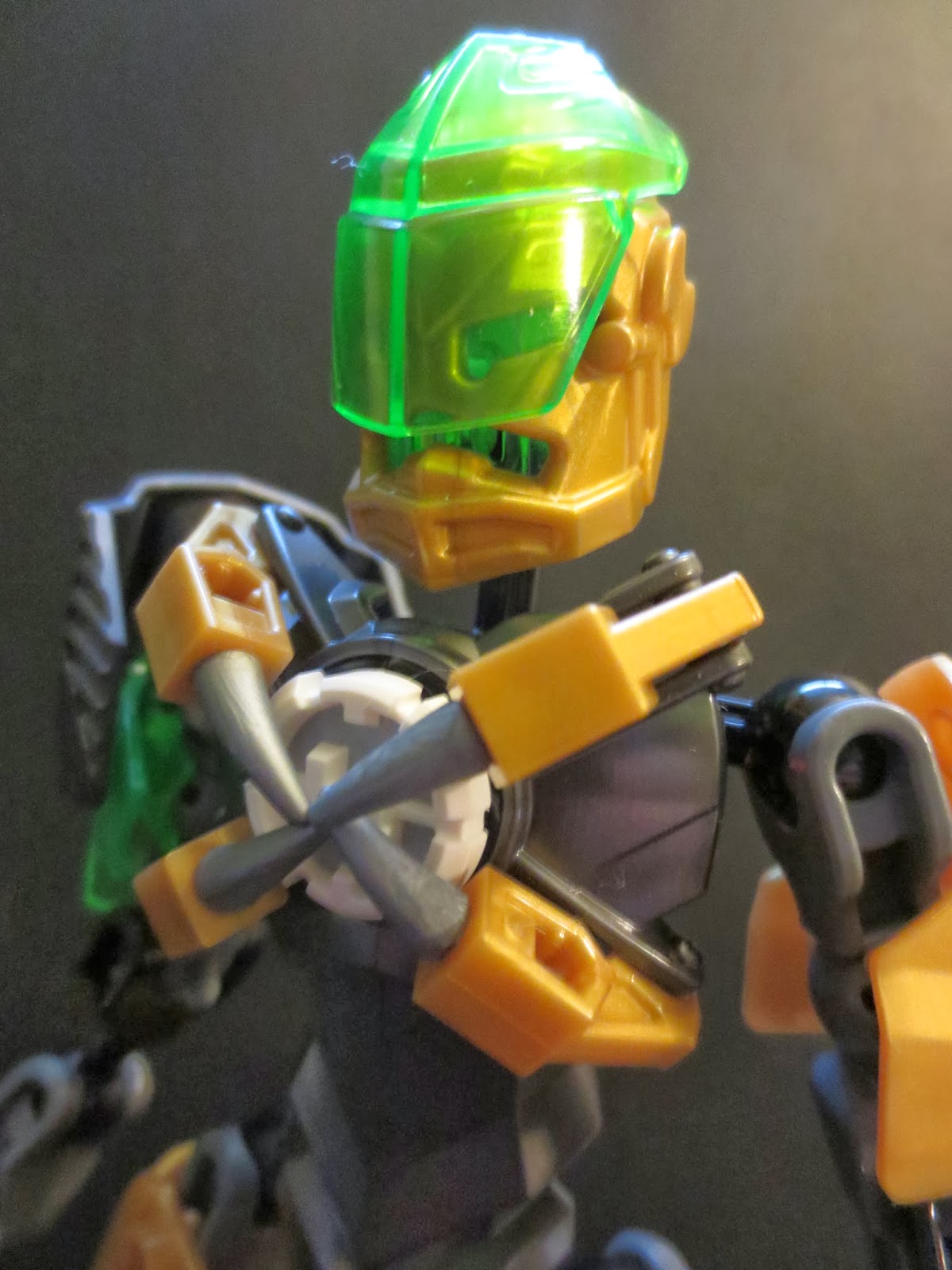 It's tough to talk about sculpt on these guys, but I'm going to try. While the pieces are shared with a number of other figures, they're really nicely designed. While I don't think I plan to collect anymore of these, I do appreciate the aesthetic that Lego was going for. When looking at the figure from the back you can see the unarmored endoskeleton, from the front the armored bits steal the show. Lots of armored plating and such that give the figure a cool, mechanical look. The head is a bit generic, but I think they're unique between figures. A translucent green plastic shows through the gold "face" to give it an interesting, robotic appearance. 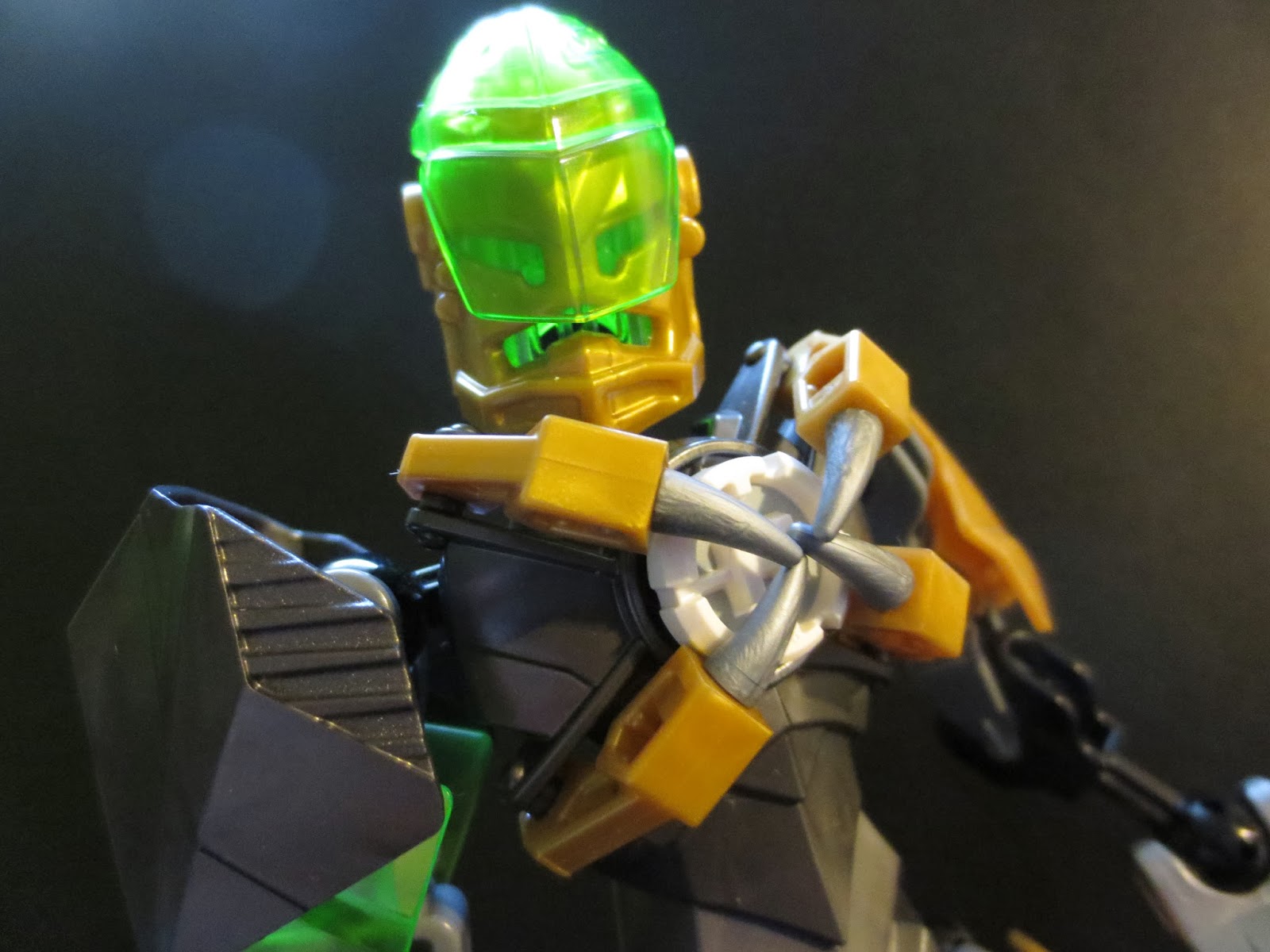 The only paint on this figure is a touch of grey on the Hero Core on Rocka's chest. The rest of the figure's color is simply derived from the various colored elements. We have black for most of the main body, a metallic gunmetal gray for the chest, shoulders, and shins, silver for the hands, arms, and feet, and a great gold color for the left shoulder, head, and thighs. It's a nice color scheme and some translucent green elements give it just enough pizazz to stand out without going overboard. 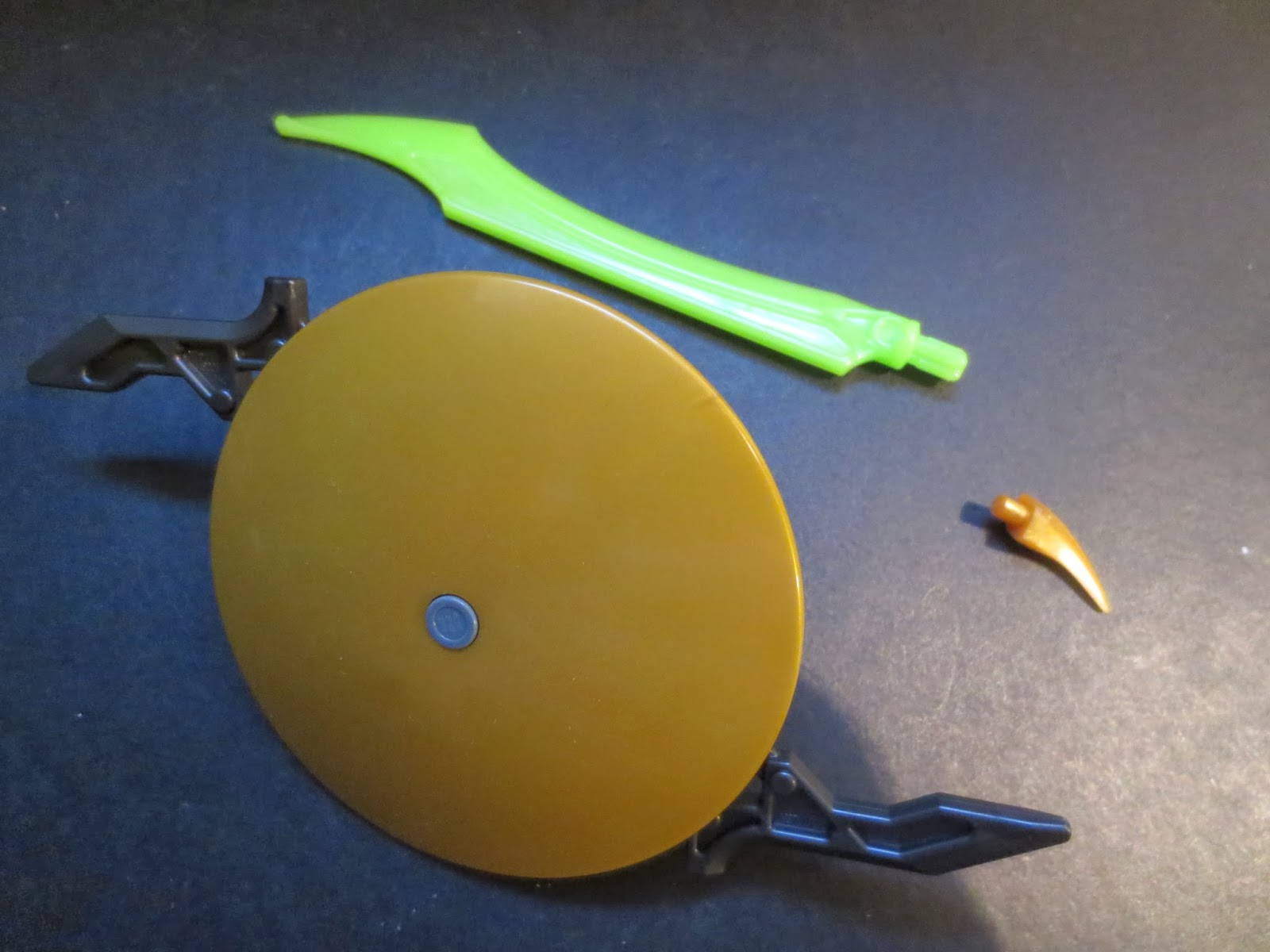 Since every piece of the figure is removable, technically everything could be an accessory. I'm going to use my better judgment, however, and try to point out what I consider the true accessories to be. First is the plasma blade sword. It's a translucent green blade that fits into either of Rocka's hands. To complete the look, however, you have to place the bottom hilt in the bottom of his hands (they're Lego Technic pins and holes). He also comes with a "spinning 360 degree razor shield" that can fit in either hand or on a tube on his back. It's a round, flat shield that has two spinning blades on the back. It's a very fun, very wicked looking weapon and gives this guy a nice, almost robot gladiator like appearance. 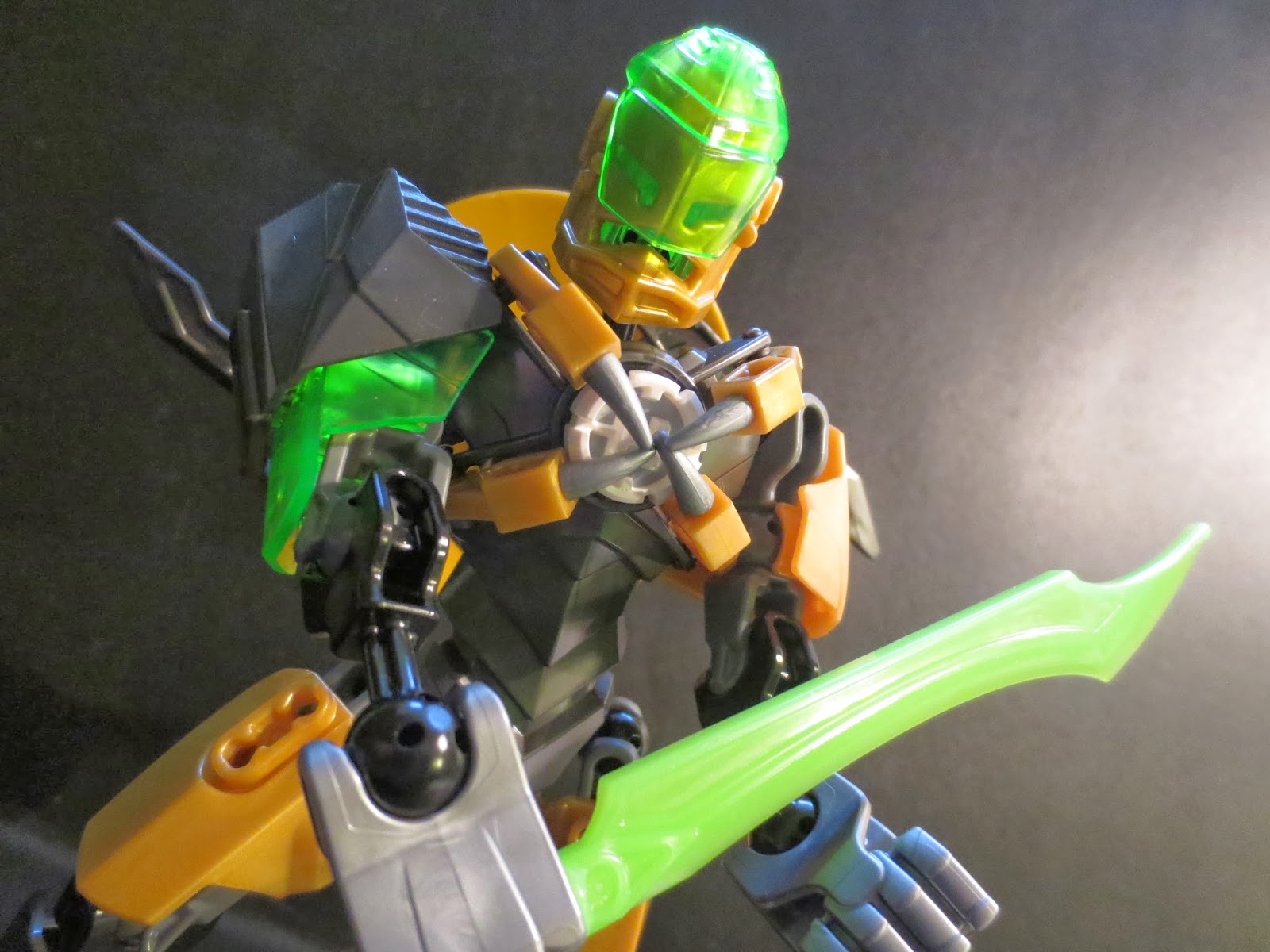 Overall, I'm really happy with Rocka. I don't think this s the kind of line I plan on collecting anymore of, but I definitely see the appeal and the quality. This guy retails for $9.99 and I think he's worth every penny. You get both the fun of building a Lego set and a well articulated, fairly large action figure with multiple pieces. When kids can buy a 7 1/4 inch action figure with multiple accessories and lots of articulation for $10 from Lego, no wonder the brick based building toy companies are spanking the traditional action figure lines. Rocka is definitely a fun impulse buy if you're looking for something unique. I'm giving him a Great and a 1/2 rating. There seems to be a huge community of fans of these types of figures, so I'd love to hear from BIONICLE and Hero Factory collectors; why do you prefer these over traditional action figures? Let me know in the comments!

While they don't have this guy in stock, Big Bad Toy Store does have the Jet Pack Rocka figure in stock now. He's much larger and comes with a jet pack, if you couldn't tell from his name.