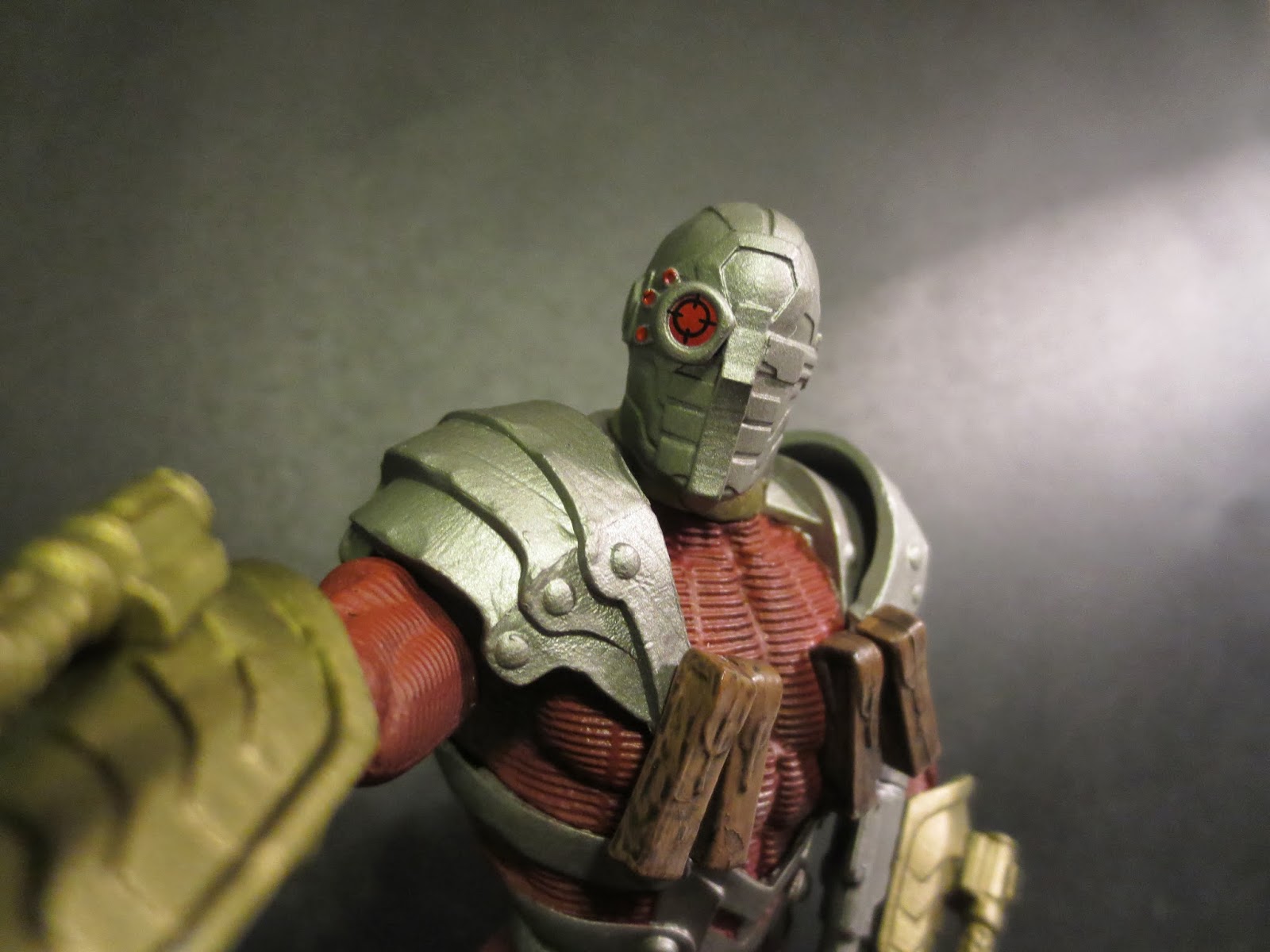 A few weeks ago I reviewed Harley Quinn from DC Collectibles' New 52 based Suicide Squad series, and now I'm finally getting around to reviewing Deadshot (I bought them both at the same time). While the character first appeared back in Batman # 59 during the summer of 1950, this version of Deadshot is based on his appearance in The New 52. In The New 52 Floyd Lawton is a primary member of the Suicide Squad, being forced to join after being captured by Batman and given a life sentence after a failed assasination attempt on a senator. While he's definitely an enemy of the Bat, Lawton does garner sympathy from the reader since his primary motivation now seems to be reuniting with his daughter. I guess you'd put him in the antihero camp. There have been a few Deadshot figures released by both Mattel and DC Direct/ DC Collectibles, and there's also an Arkham Origins Deadshot soon to come. Ready to take a look at Floyd and see if he measures up to previous released versions of the character? Then join me after the break... 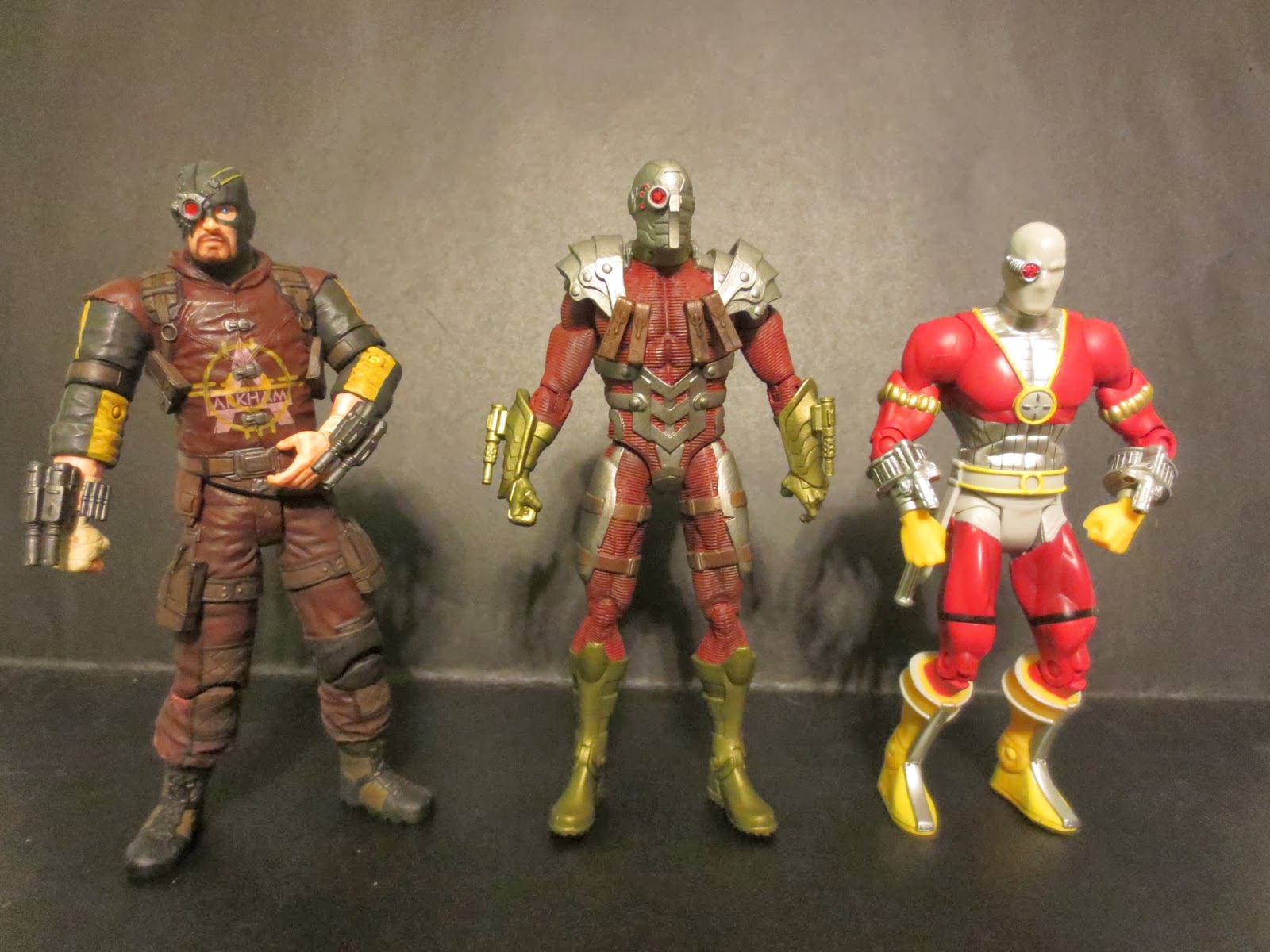 Deadshot stands a little over 6 3/4 inches and is geared up in his costume from The New 52's Suicide Squad. I really like the style of these figures; DC Collectibles has been keeping a nice, consistent style with all of their figures (other than the Arkham specific lines) ever since they released their first The New 52 product. While DC Direct really used to jump back and forth between different artist specific styles and design, these are a bit more homogeneous, which I really prefer. It's nice to have a wide variety of characters all in the same style. 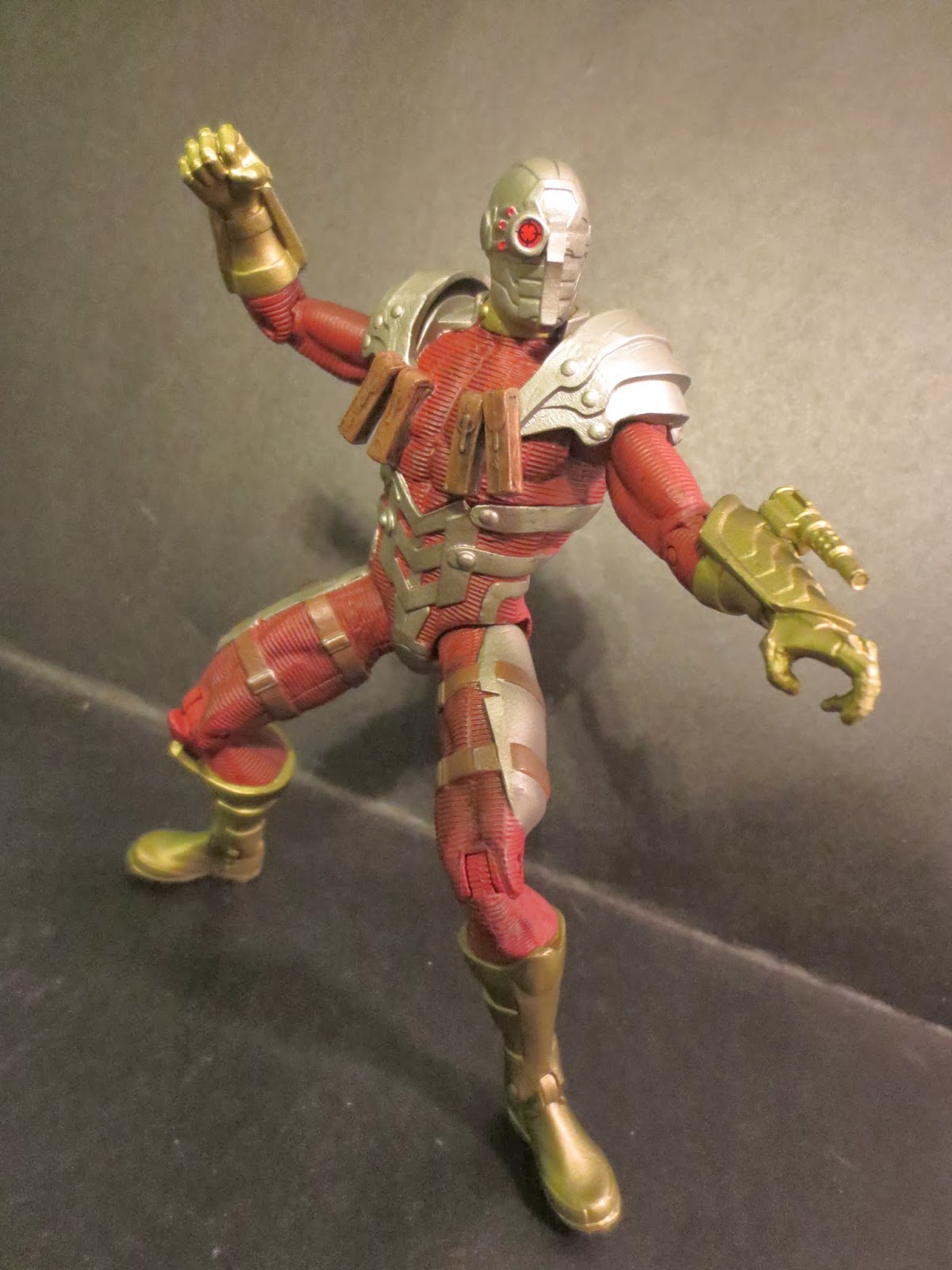 DC Collectibles seems to pick and choose which of their figures get more articulation, so fortunately Deadshot gets a bit more than your average figure. He features: hinged ankles, swivel boots, hinged knees, ball jointed hips, ball jointed shoulders, swivel biceps, hinged elbows, swivel forearms, hinged shoulder pads, and a ball jointed head. It's not bad articulation at all, but the lack of any kind of torso or waist articulation seems a bit limiting. Since he's a bulkier figure wearing an armored suit, a ball jointed torso seems like it would have worked perfectly here. Otherwise, everything else seems to work really well. It's all nice and tight with no discernible problems. 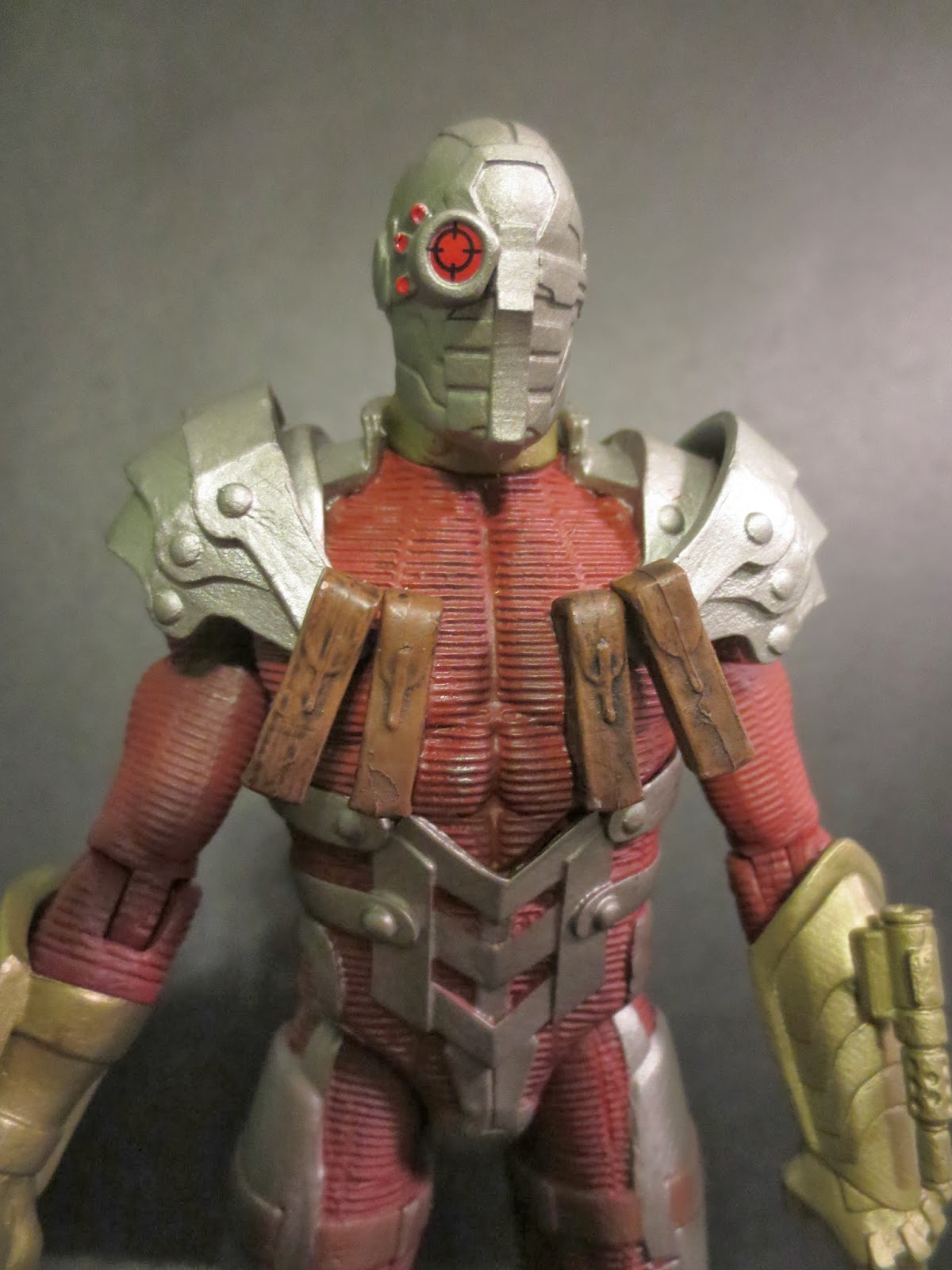 I really like Deadshot's outfit in the New 52. While it retains many similar elements from the more recognizable former costumes, it also takes some design cues from the types of high tech military combat suits as seen in video games franchises like Crysis and Metal Gear Solid. The main body of the outfit is a ribbed, form fitting body suit that is covered with various metal panels and straps. It's busy, but not too busy. The armored panels are nicely dented and chipped to show that Floyd's been in a fight or two along the way. He's got some pretty heavily armored boots and gloves too. The gloves look particularly as not only do they have armored knuckles but they're also sporting Deadshot's dual silenced guns. He's got four small leather pouches on his chest, too (probably carrying extra magazines). I'm loving the helmet; it's extremely well done looks fantastic with plenty of slick details. I just wish DC Collectibles had included an un-helmeted head for Floyd. Since the guy was definitely the main character and protagonist in Suicide Squad, an un-helmeted head would make sense. 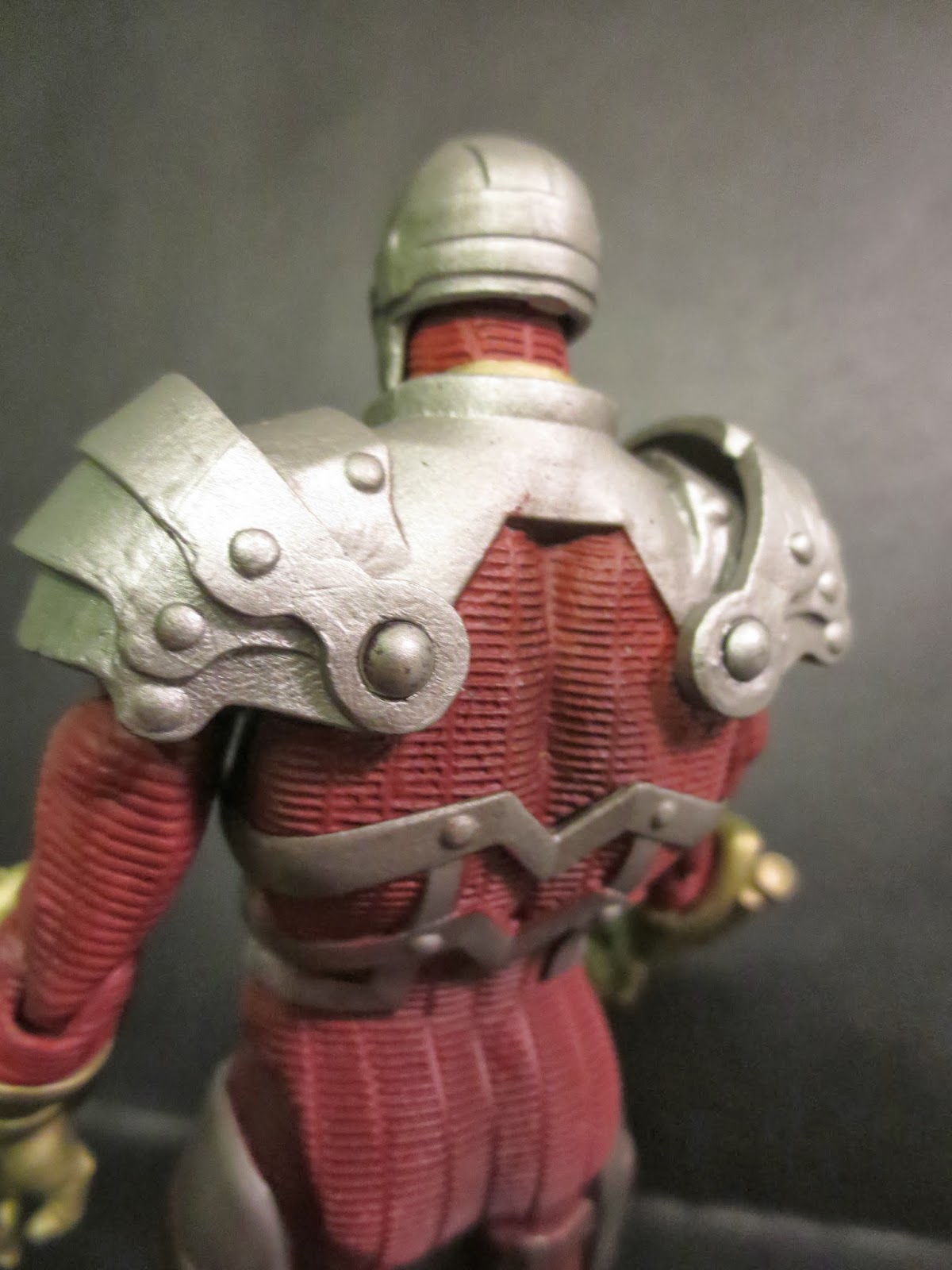 I can't fault the paintwork, either. Deadshot is rocking his familiar red and gold with more silver and no white this time. The armored panels look nice and even a bit weathered in places. The dark red of his suit has a light wash applied to bring out some of the fine texture of the material. Extra details like the weathering on his ammo pouches, the crisp, clean detail on his helmet scope, and the bright gold of his boots and gloves really just make this guy work. A great paint job excellently compliments a great sculpt. My only problem is that I wish his guns were painted a different color than his gloves. This looks to be an oversight when comparing everything else about this figure with comic images. 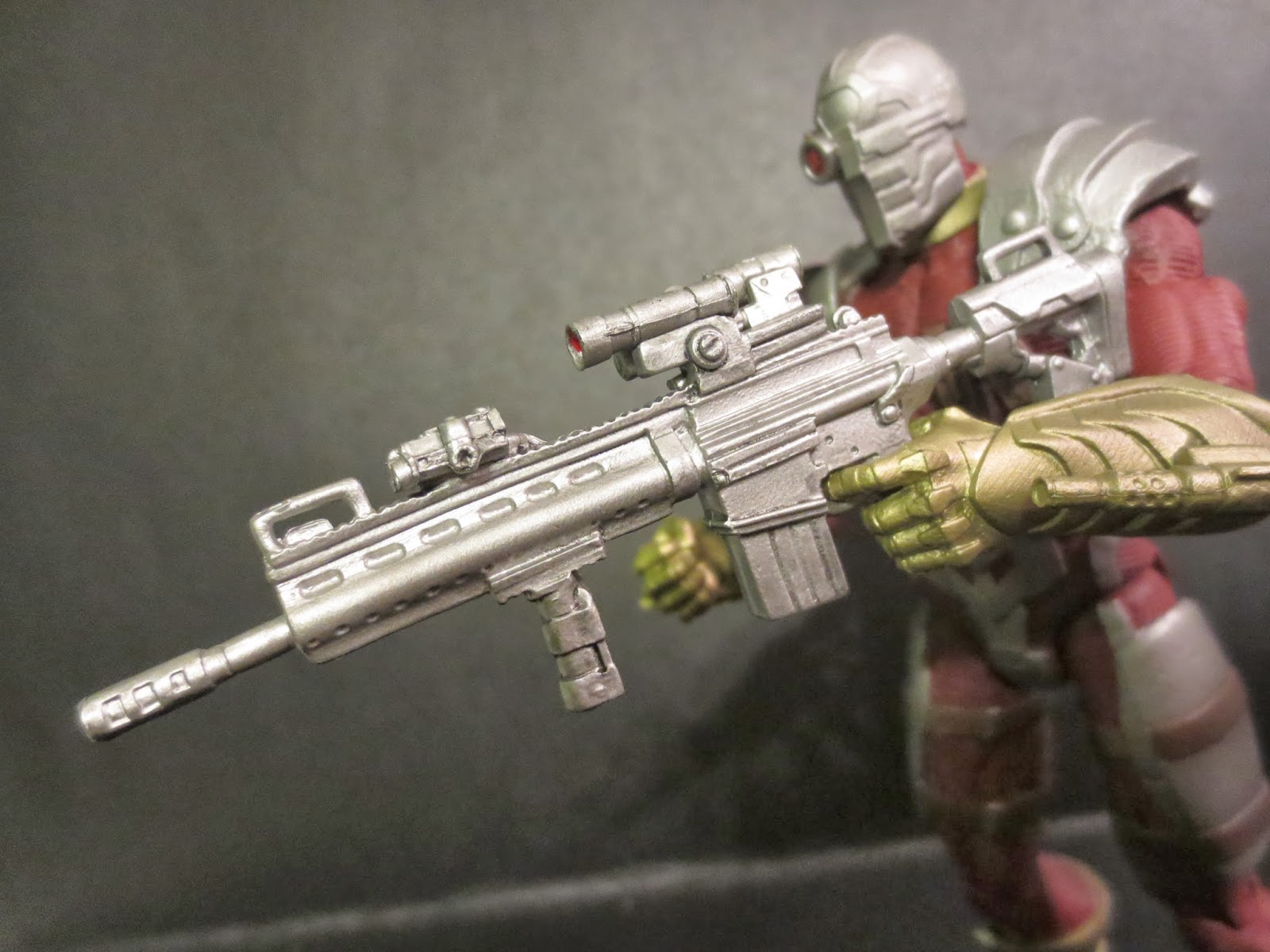 Deadshot only comes with one accessory, but it's pretty snazzy: he has perhaps the coolest assault rifle that I've seen with an action figure in quite some time. This thing is awesome. It's an M4 styled assault rifle packed with various tactical attachments such as two scopes, a forward grip, and a laser unit. Molded in a nice silver plastic with a dark wash to bring out the details, this weapon looks fantastic with Deadshot. It's just too bad that due to his right hand being a fist, there isn't really any great way for him to hold it. 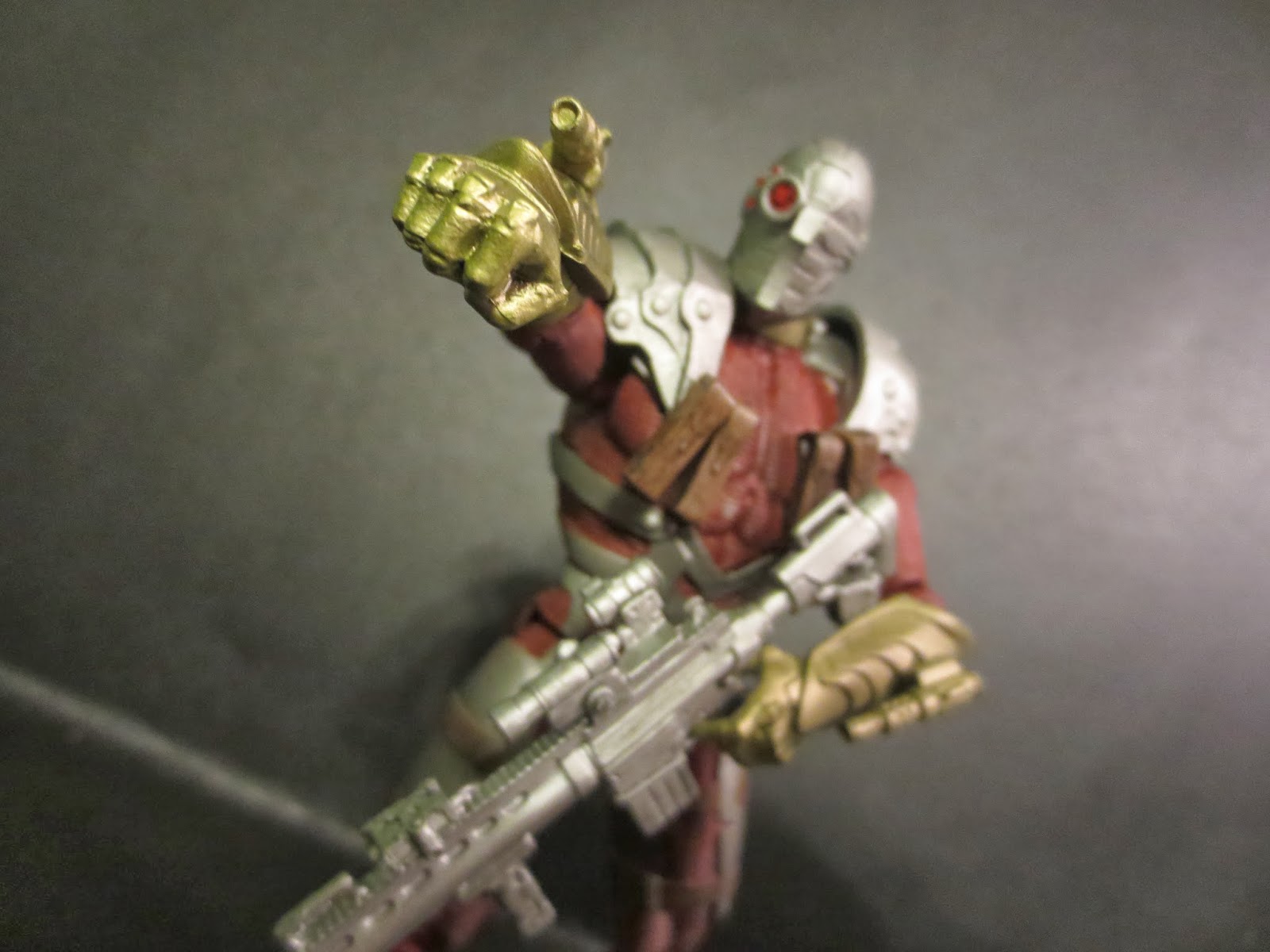 Overall I'm quite happy with Deadshot. He's got great sculpting and paint, a fantastic accessory, and some pretty solid articulation. Sure, the articulation could be better (particularly in allowing him to actually hold his rifle) but I think he's definitely on the better end of DC Collectibles' offerings. I'm easily giving him a rating of Great: he far surpasses the previously released Arkham City Deadshot from last year and even is a bit better looking that Mattel's DCUC offering. While I'm not planning on completing the Suicide Squad line (sorry Captain Boomerang!) I'll be happy to have old Floyd here on my Batman villains shelf chilling with Harley Quinn and Deathstroke. What could go wrong with that group, eh? 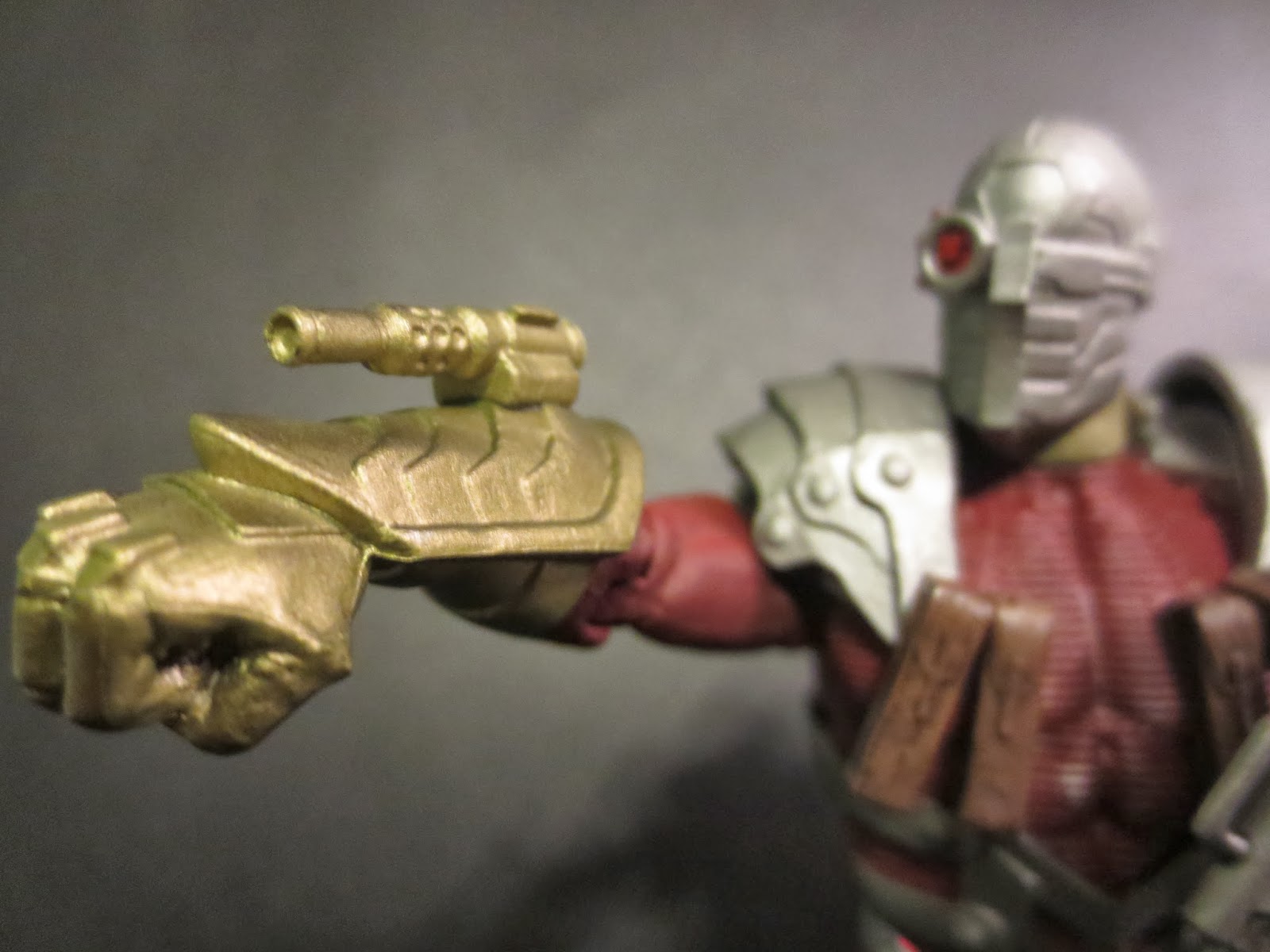 Want to get your hands on this guy? Head on over to Big Bad Toy Store and pick him up today!
Also, check out our reviews of these other DC Collectibles New 52 figures:
Wonder Woman versus Katana
Deathstroke
The Joker
Harley Quinn