Action Figure Review: Modulok from Masters of the Universe Classics by Mattel 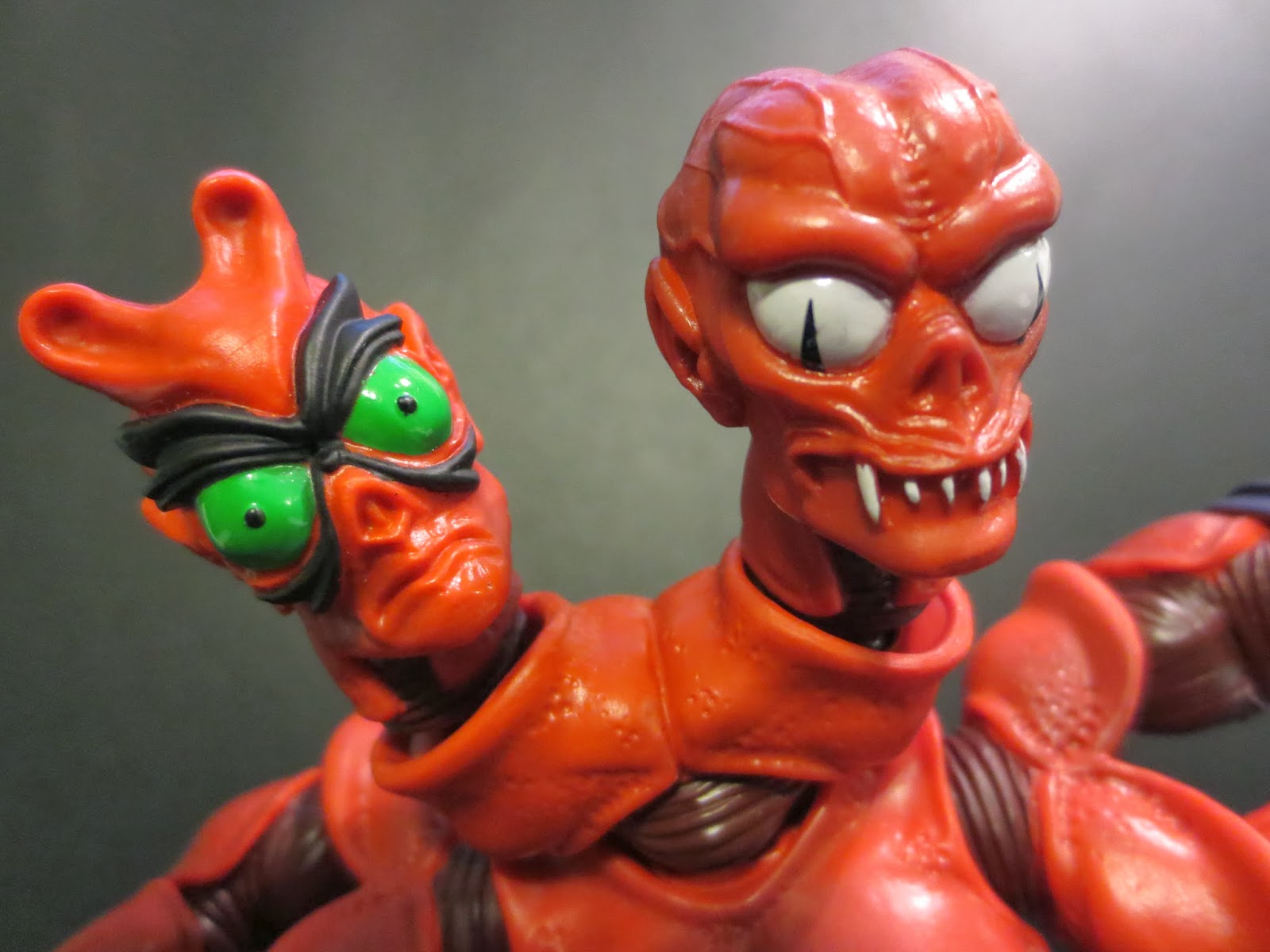 Whether you're collecting superheroes, wrestling figures, or modern interpretations of vintage action figure lines, one of the most exciting and rewarding aspects of the collecting process is building and completing various sets and teams of figures. With Modulok's introduction into Masters of the Universe Classics, not only do we have all of the original members of the Evil Horde but we also have every figure from 1985 and the first four years of the vintage line. I just find that to be really exciting and a huge milestone for celebration! (To complete 1986, Year 5 we still need Dragstor, Extendar (coming this year), Flying Fists He-Man, Multi Bot, Rio Blast (coming this year), Terror Claws Skeletor, and Tung Lashor.) Modulok actually had quite a few appearances in various MOTU media including both Filmation cartoons, three mini-comics, The He-Man and She-Ra Christmas Special, the Marvel/Star comics, the new Dark Horse mini-comics, MOTU magazine, and the new DC Comics series. Not bad for a guy who was sold as 22 separate pieces in a box rather than on a blister card like nearly every other figure. Modulok was a figure that I know I was apprehensive about appearing in MOTUC; sometimes Mattel knocks unique designs and integrated "action features" out of the park and sometimes they strike out. Mattel went all out with Modulok in giving him his original action feature that lets collectors assemble him in multiple different ways. So, does Modulok remain the Evil Beast of 1000 Bodies or is he simply the Evil Beast of 1000 broken parts? Read on and find out.... 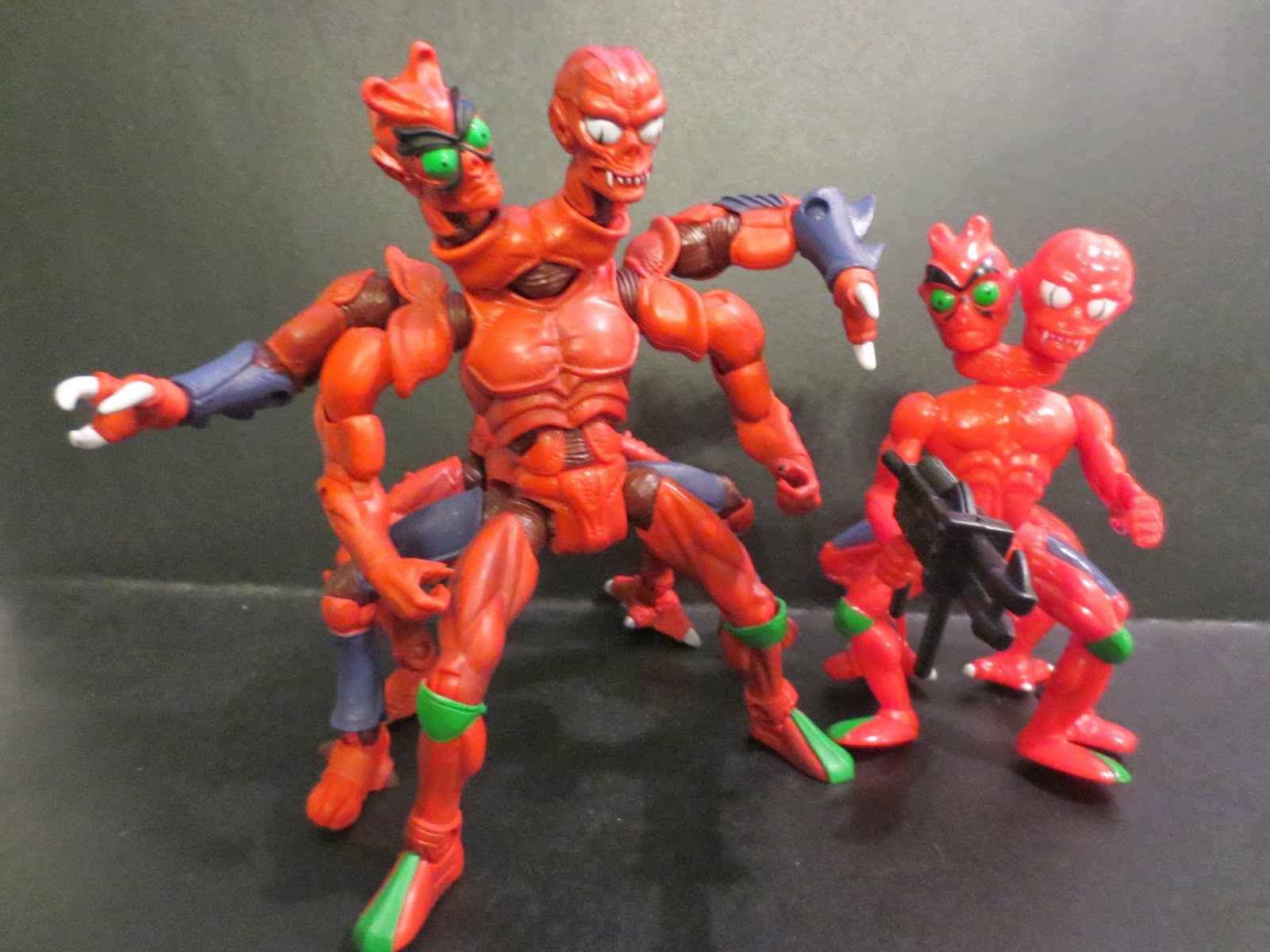 Modulok is a perfect example of the MOTUC style: he's overwhelmingly accurate to the vintage figure but loaded with more detail, better proportions, and subtly retouched to look just a bit more menacing. Since he's a modular figure it's tough to accurately state his height, but if you build him so that he replicates the body structure of a normal figure he will come in right around the 7 inch mark like everyone else. Like his vintage counterpart, Modulok does not come packaged on a blister card; instead, he comes in a colorful painted box. All of his parts are laid out in a plastic tray so that you can start easily building him right away. 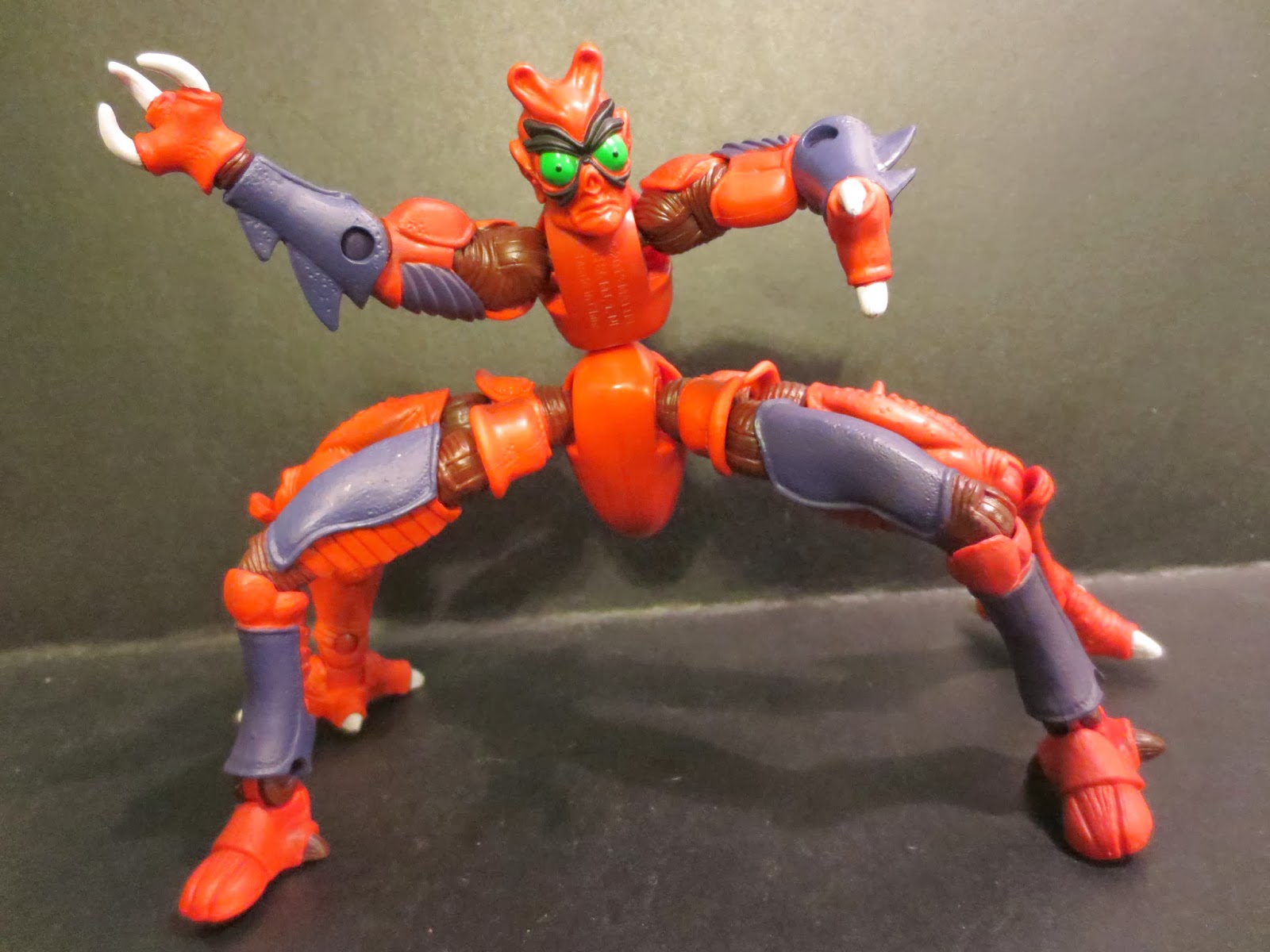 I was actually one of the fans who originally stated that I did not want a Modulok that actually disassembled. Early on in MOTUC the line had way too many quality control issues to make me comfortable with a figure who relied so heavily on removing limbs. Over the past year or two, though, Mattel has really improved the quality control on this line. While their might be weird design choices, the QC is great and Modulok might just be the poster child for how far MOTUC has come. The Classics Modulok is made up of 22 separate pieces that all connect via extremely sturdy true ball joints. The ball joints are all interchangeable and allow you to build Modulok in a variety of different ways. One head, two heads, no head. Six legs, three legs, arms for legs. Modulok is pretty versatile. You can actually build a Modulok that uses every piece except one: an extra tail that has no sockets on its sides. 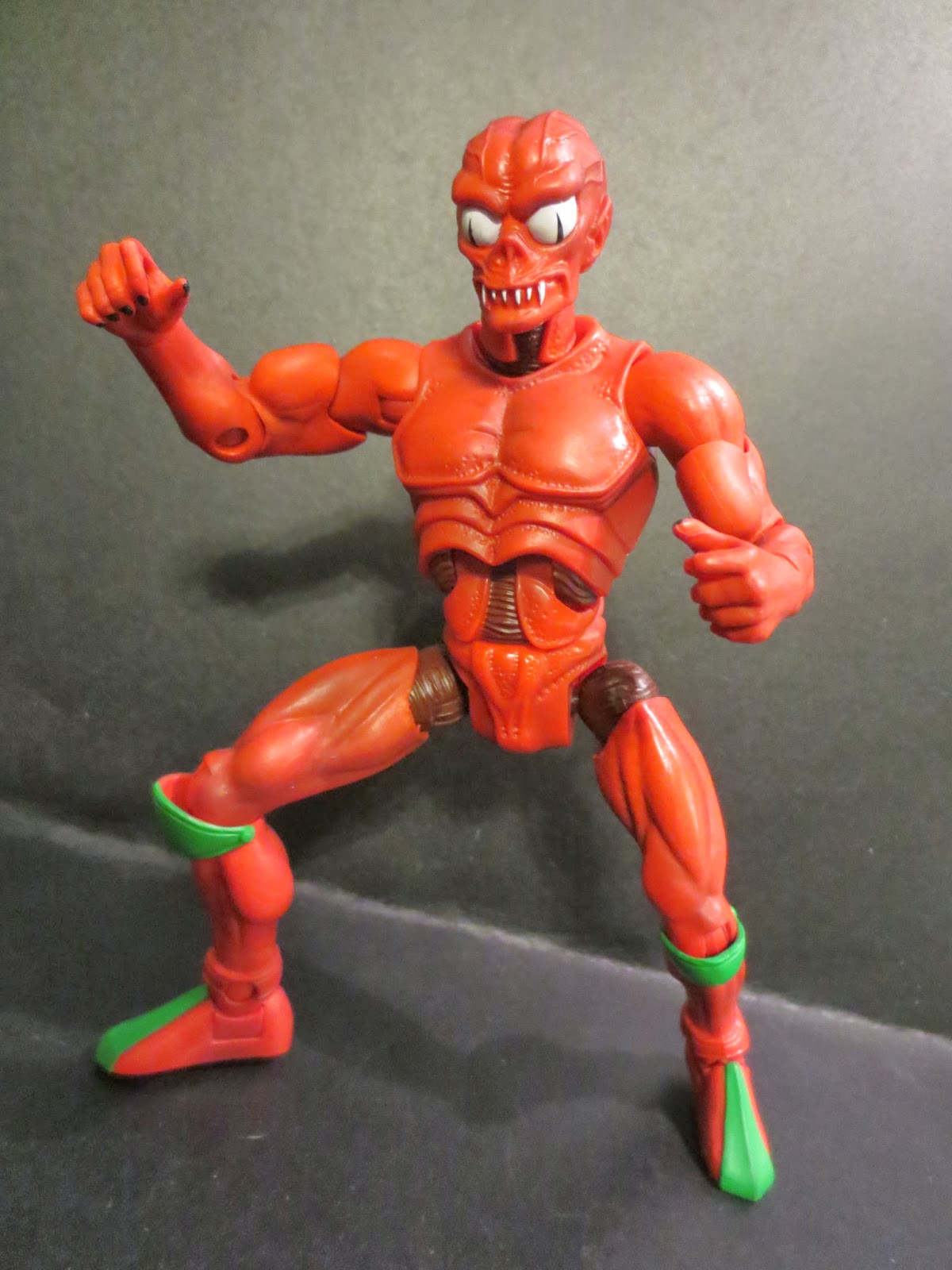 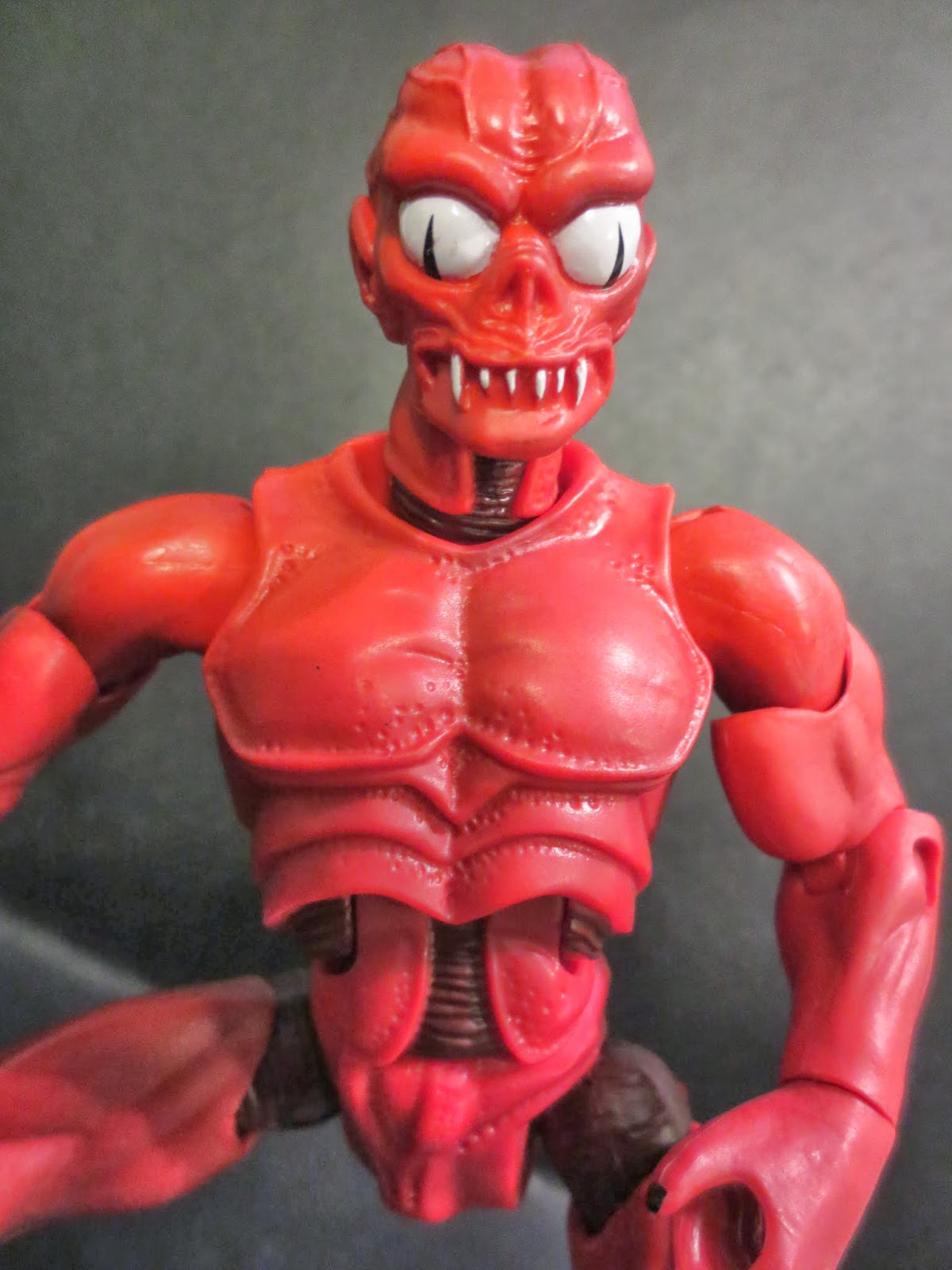 I really hate to gush, but Modulok manages to have not only some of the best articulation ever seen on an action figure, but his sculpt is also fantastic and works with the articulation. Much of Modulok looks to be composed of segmented armored plates, kind of like a lobster or something, so the articulation is nicely worked into the spaces between. This guy has so many weird and varied textures on his body that you'll have a hard time describing him; one set of legs is pointy and covered with spikes, like crab legs, while has rounded, pockmarked armored plates. It would take me all day to gush about how great Modulok here looks, so let's just say that he's a figure you can tell that the Four Horsemen put lots of time and love into creating. 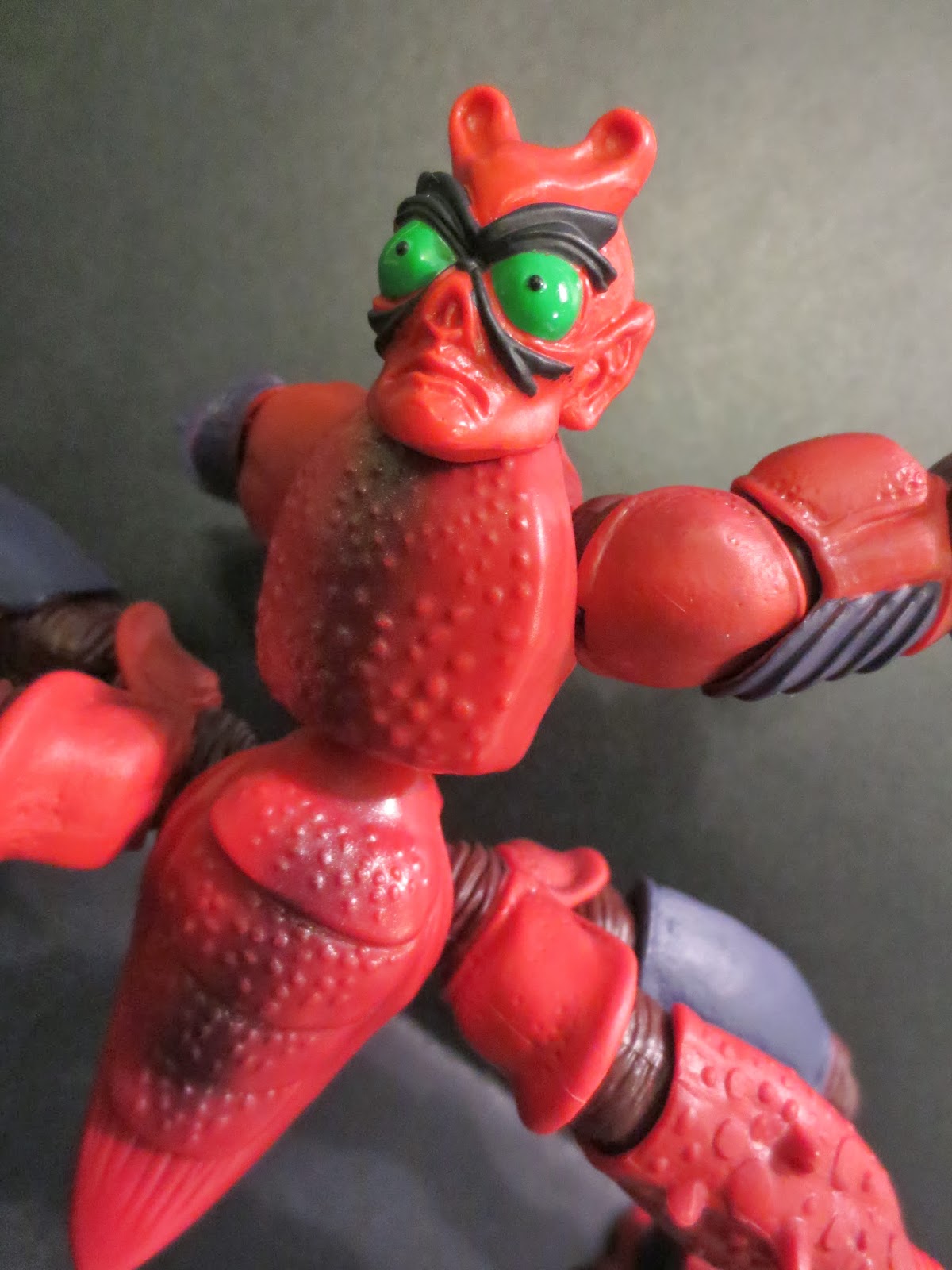 Surely with all of the crazy articulation and excellent sculpting, Modulok must have a weakness. Right? Right? Wrong, son. Just wrong. Like the Jennifer Lawrence of action figures, Modulok continues to excell in every role put before him. Not only does Modulok have a great red color scheme that is broken up by purple armored bits, trendy green knee pads, white claws and teeth, and dark red musculature visible at the joints, but he also has a wonderful dark shading all over his body to highlight the excellent sculpt. Everything is clean, neat, and completely off the hook. 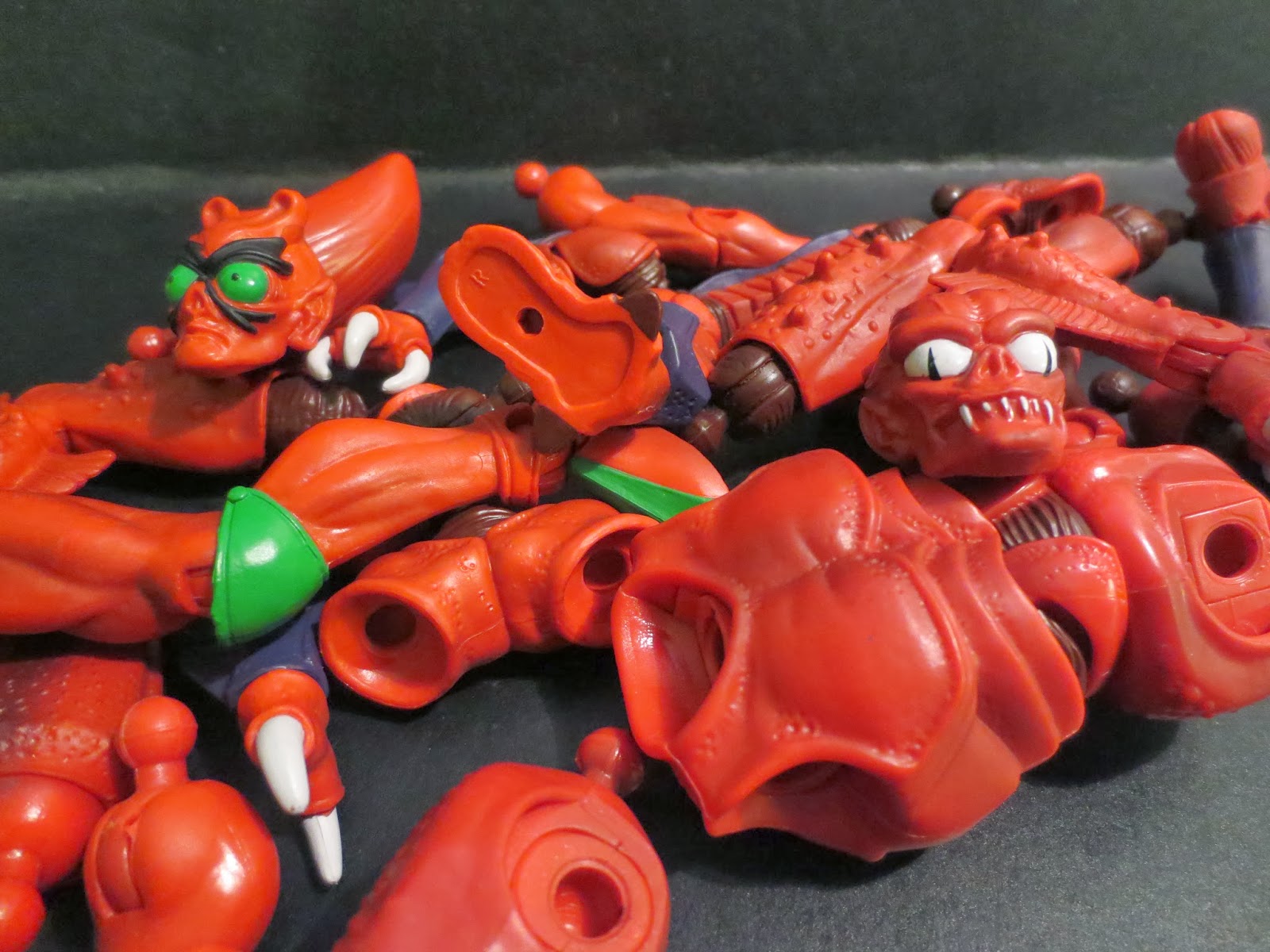 When it comes to talking about Modulok's accessories, well, every part of him could be an accessory, right? I've seen people create multiple little figures out of this guy as well using various bits and pieces like his tail or a spare arm for a club. 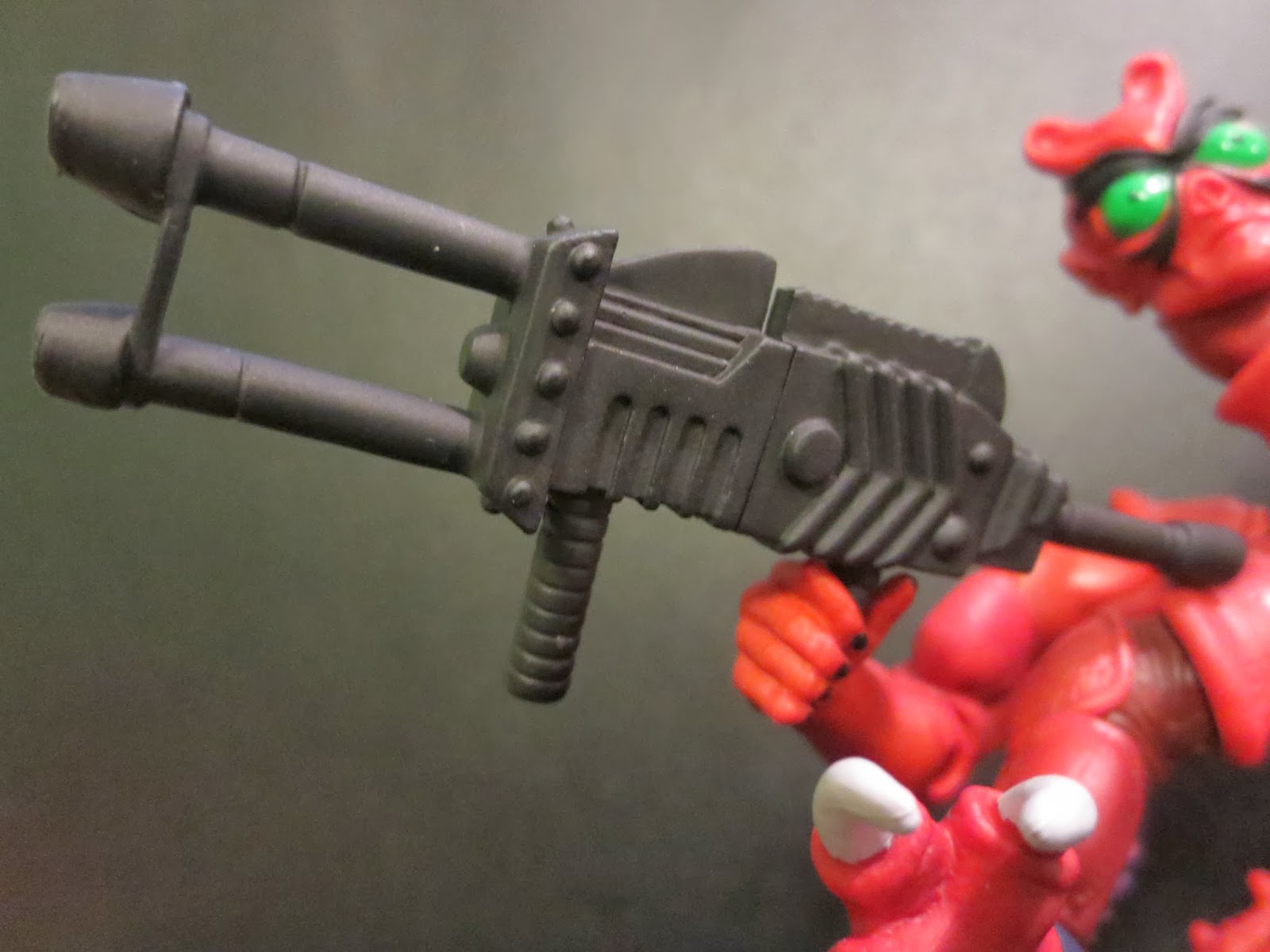 He does come with two true accessories, however: two halves of a large gun that can connect together or separate into two smaller weapons. The gun is given a nice matte black paint job and is a little floppier than your typical weapon, but it sin't bent out of shape. I'm not sure why it's so soft; perhaps it was molded in the same mold as the flexible sockets that allow Modulok to be so versatile himself. Usually I hate floppy weapons, but this one isn't too bad and it's not bent out of shape. It also looks really cool, definitely having a very old school MOTU vibe to it. 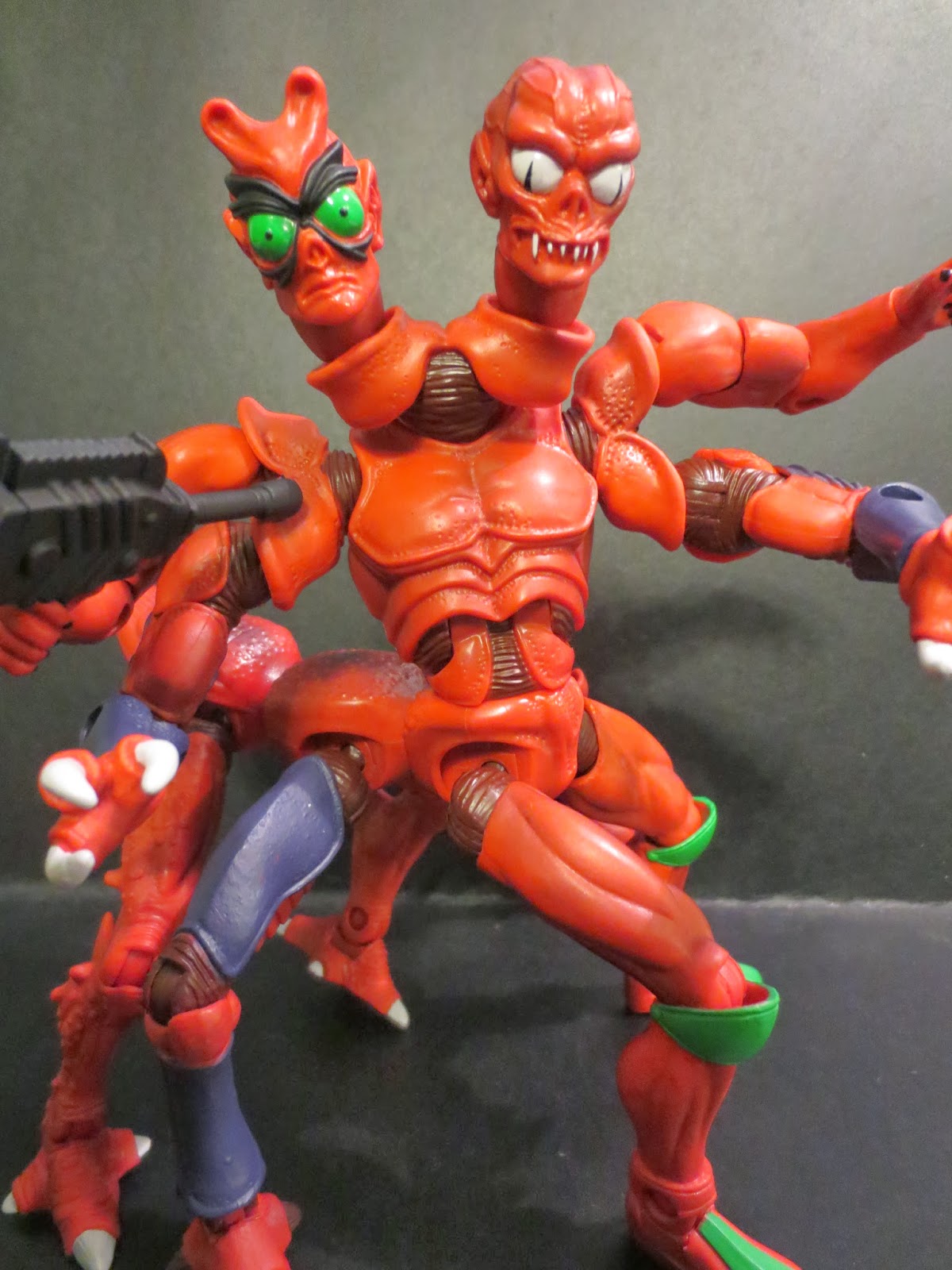 Believe me, I read over my reviews to try and see if I'm being too positive or too negative and if the praise and/or scorn is deserved. Reading over Modulok's review, I can see that it's all praise and it is all definitely earned. While I've always hoped we would get every vintage figure released in MOTUC, Modulok was not even on my short list of the 25 figures I felt needed to be made in order for the line to feel complete that I wrote in January 2012 prior to the New York Toy Fair. I think that says a lot for how great this figure is and how much he won me over. In times like this, I really do lament Mattel's sub model and quick sell outs because I know that Modulok is far better than most other action figures out there, but ultimately reviews don't matter. Most collectors who own or will own Modulok will do so because they pre-ordered him last year. A great figure like this could easily get new collectors interested in this amazing line, but unfortunately we know that that just isn't going to happen at this point. Still, Modulok is the definition of an Epic action figure and I hope everyone that wants one can manage to get one.