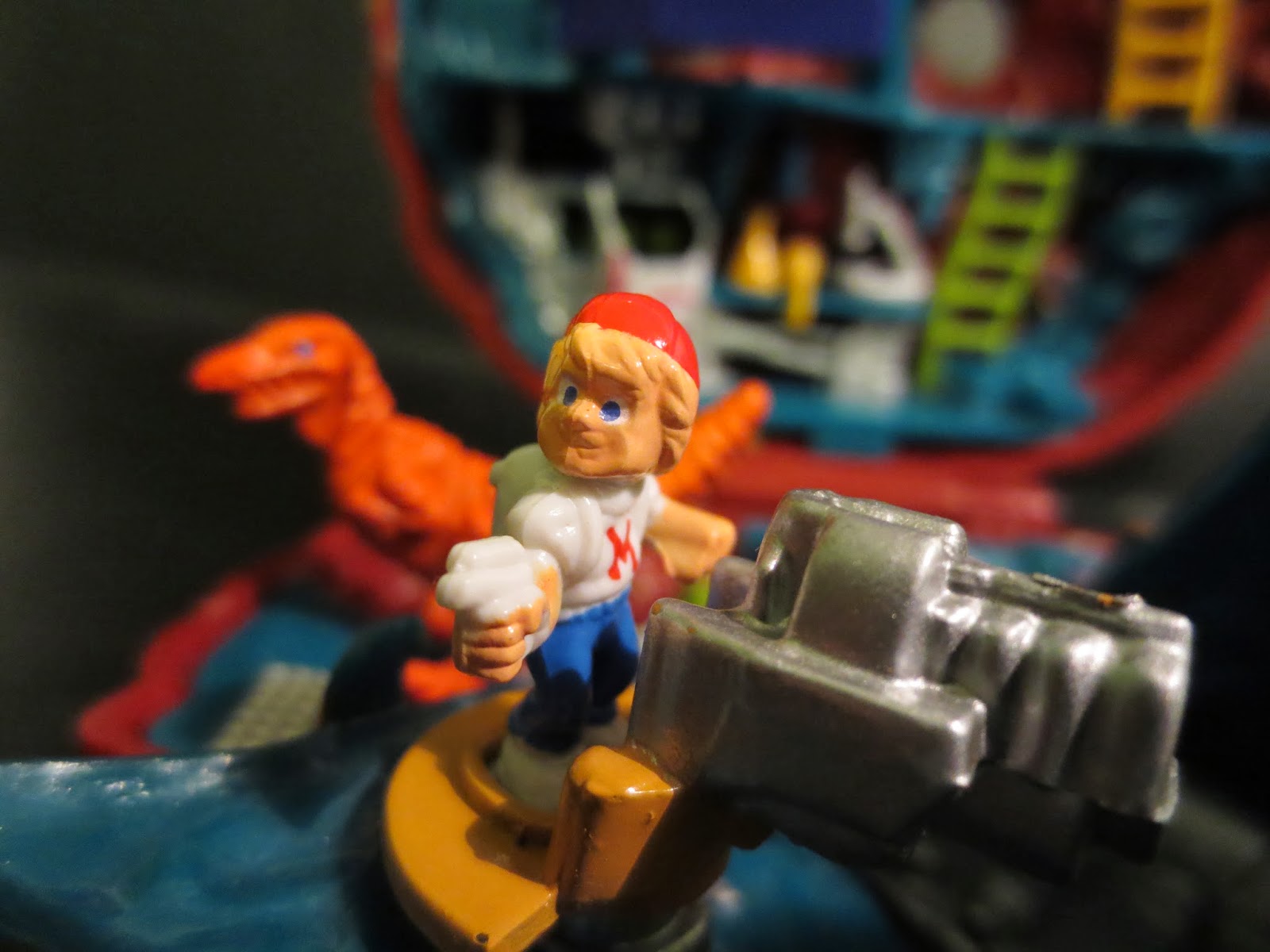 I've heard some great feedback from some of you who love not just Mighty Max but micro playsets in general, so I'm going to keep on keeping on and bring you a review of a classic micro playset every Monday. Today I'm looking at a Mighty Max Doom Zone that I always wanted as a kid but never owned: Mighty Max Blow Up Dino Lab! Dino Lab was part of the second series of Doom Zones released in 1993 and definitely seems to be inspired by Jurassic Park in some way. Outside of the United States, it was also called "Mighty Max Blows Up Mutasaurus". While I love revisiting sets I have from childhood, I also love checking sets I never owned. Lots of new discoveries can be had when opening up a Mighty Max set, so how about you hold on to your butts and join me after the break.... 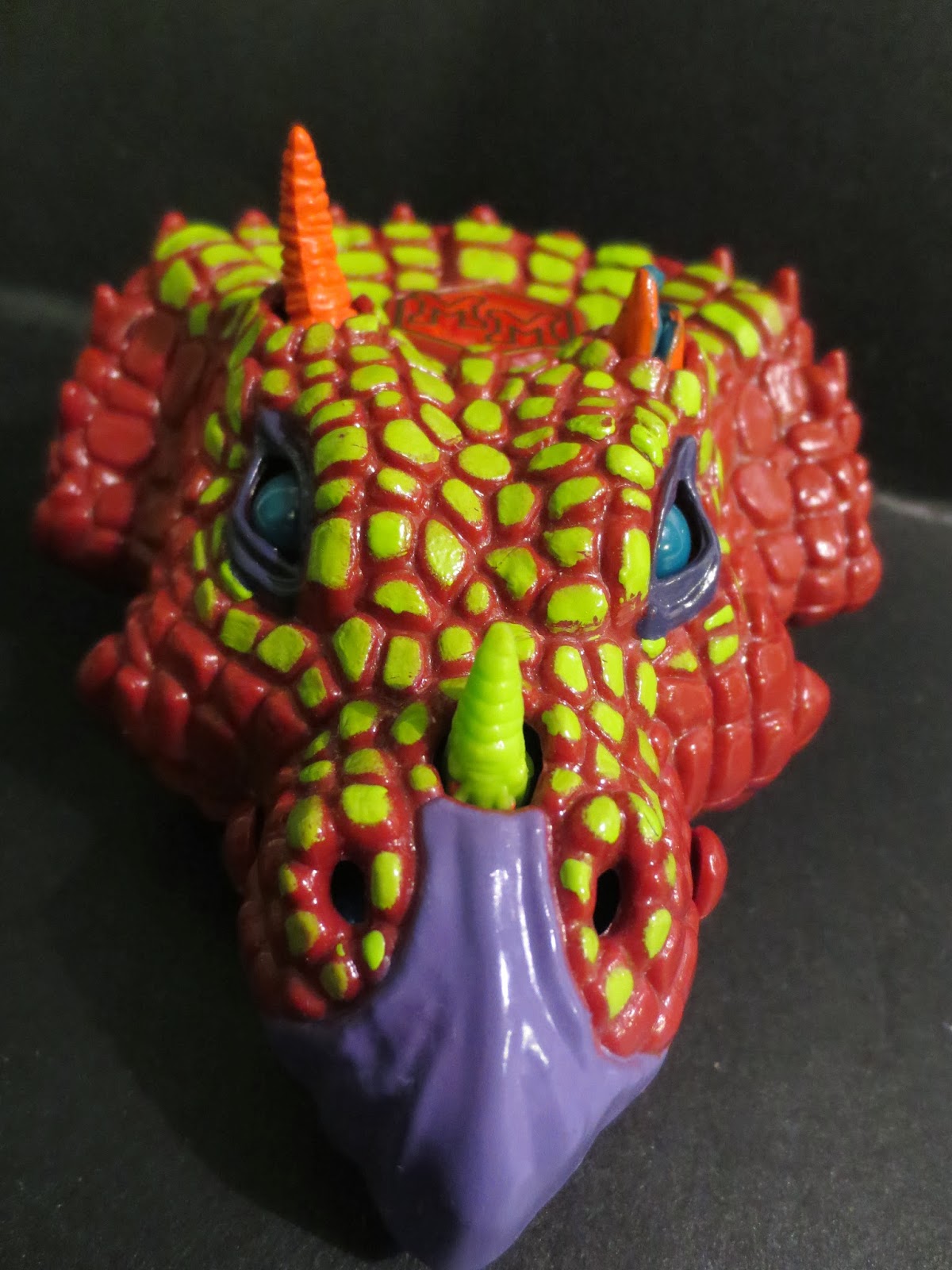 I love the colorful triceratops head that makes up the exterior set. The dark red with bright green highlights really looks quite cool. I wish the horns were all a bit bigger, but they're actually made up of pieces from inside the set: The cracked horn is the top of a volcano, the orange horn is a dinosaur's tail, and the green horn on the nose is the beak of a pterodactyl. The Mighty Max logo (with gold trim) is also visibly displayed on the forehead. It's a small criticism, but this is a tough set to open. It's hard to get a good grip on it. 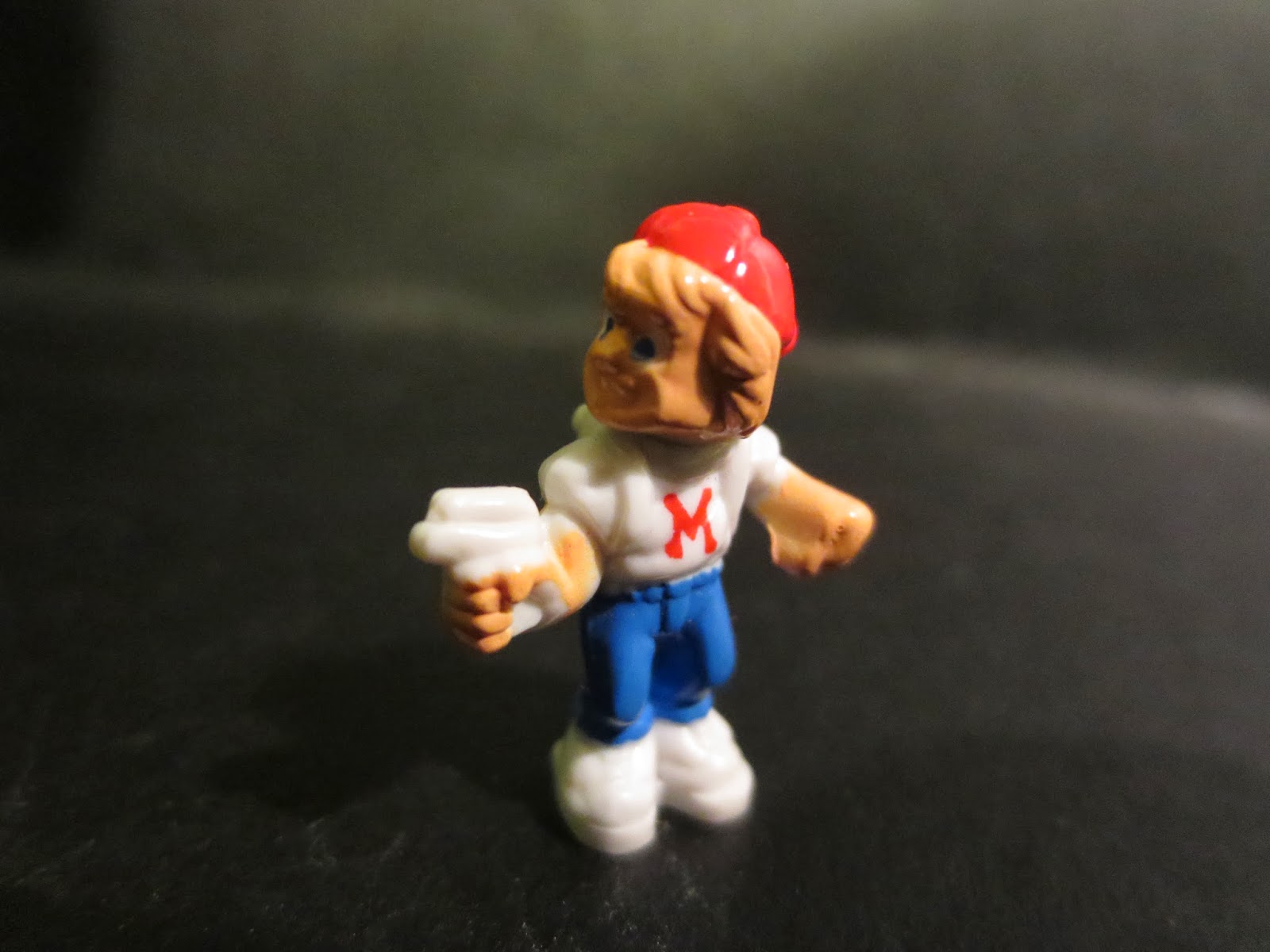 In 1993 the previous Precious Moments looking Max figures were replaced with a new "teenage" Max look. He's got better proportions, more detail, and stands about 3/4 of an inch tall. They also always have red hats (as far as I can tell, anyways). The foot print is the same, though, so they'll still work with any older sets. Good thinking Bluebird! This Max has a canister on his back and is holding a spray gun of some kind. What kind of chemical is he spraying? Who knows, but it's definitely kind of cool. 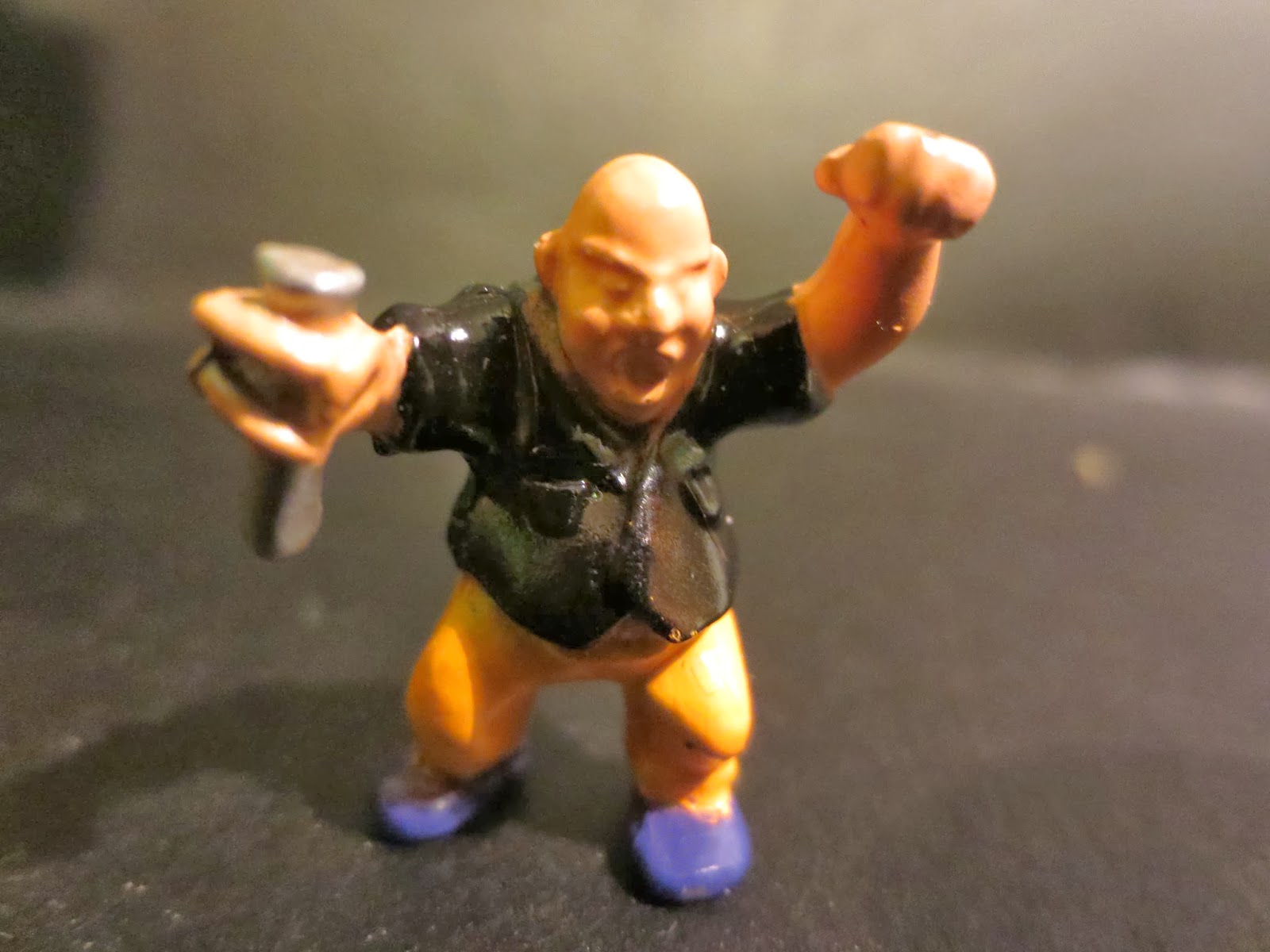 Professor Zygote is the main villain in this set. He's a chunky bald guy that carrying a test tube in his right hand and wearing a snazzy combo of yellow pants and a black shirt. For some reason, he's always reminded me of Wayne Knight's character, Dennis Nedry, from Jurassic Park. Well, except for the fact that Prof. Zygote is being mutated in some way. The back of his shirt is ripped open to reveal what looks like green ribs and his right arm looks mutated. Is this guy becoming a dinosaur? Were the other dinosaurs in this set previously human? Was Prof. Zygote so preoccupied with whether or not he could turn people into dinosaurs that he never stopped to think if she should? These are the philosophical questions a Mighty Max set asks of us. 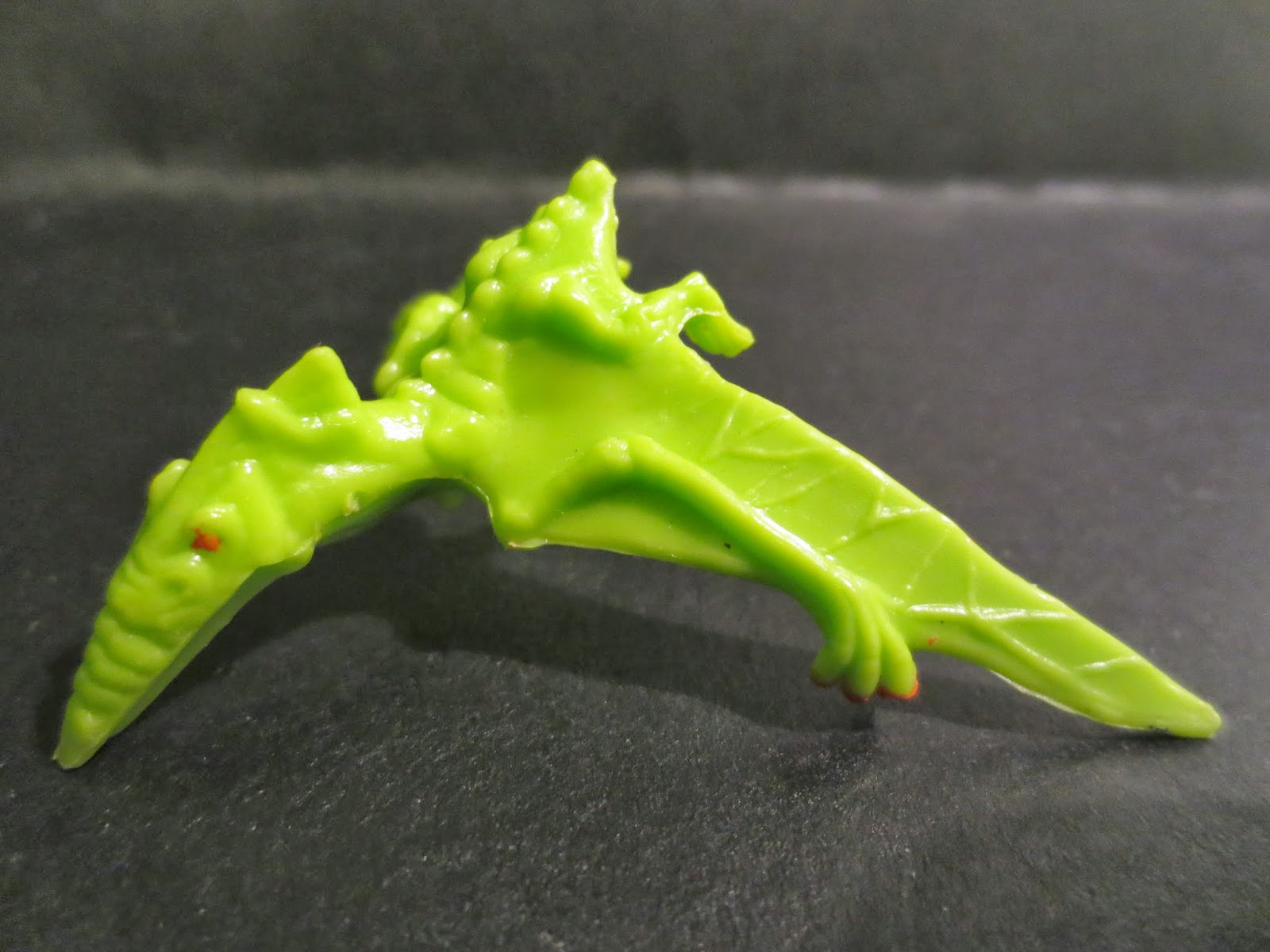 The Pterodactyl is pretty large (his wing span is about 3 1/2 inches) and molded from a flexible bright green plastic. He's got some nice orange paint apps on his eyes and claws and some really impressive sculpting. He's really creepy and bony with vein and stuff all over his wings. I love him, although I do wish he a spot for Max to ride on his back. 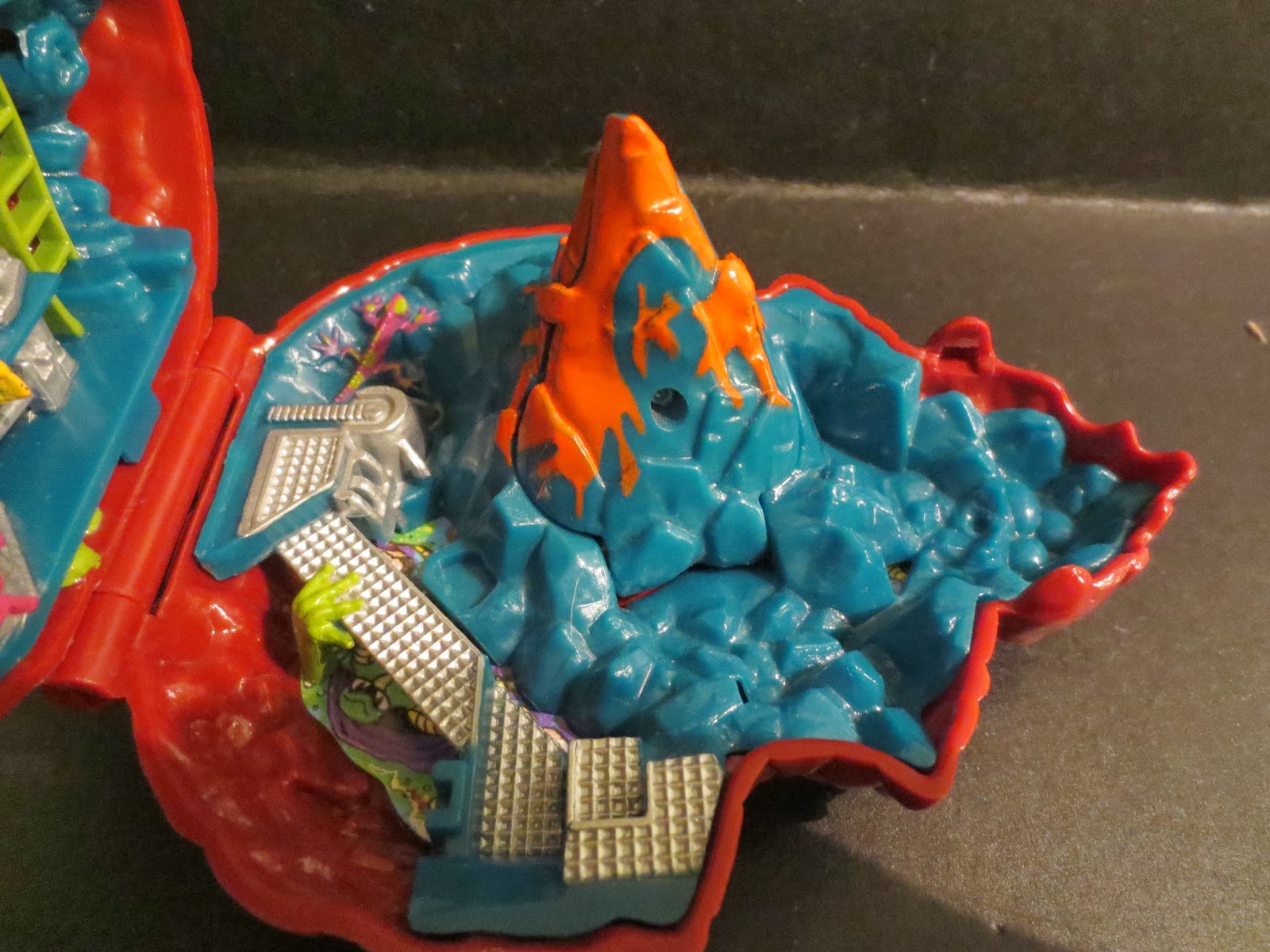 The base of the Doom Zone is some kind of blue, rocky region where Prof. Zygote has set up his Dino Lab. A midst all the rocks there is a volcano, a purple lizard with green spots, and a metal grated catwalk over a pool of sludge where a creature is reaching out to grab someone. The creature and the sludge are simply a sticker on the base of the set but the arm and hand are sculpted. It looks great and is very menacing! There's a spot on the floor for Max to stand in. 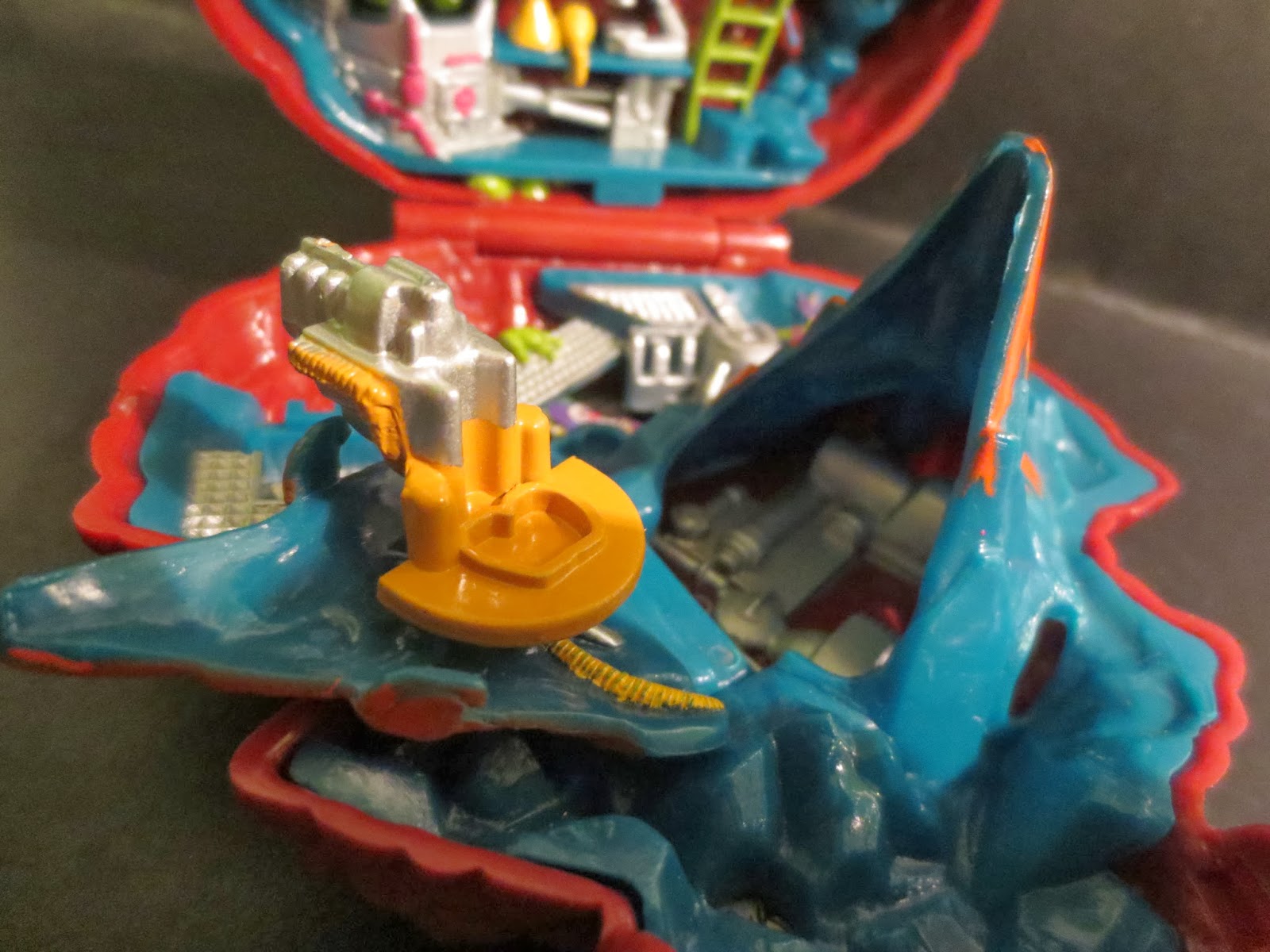 The volcano is really cool because it opens to reveal a fold out laser turret and a bunch of hidden tech inside. Max can stand on the laser turret and it rotates 360 degrees to take out any baddies. 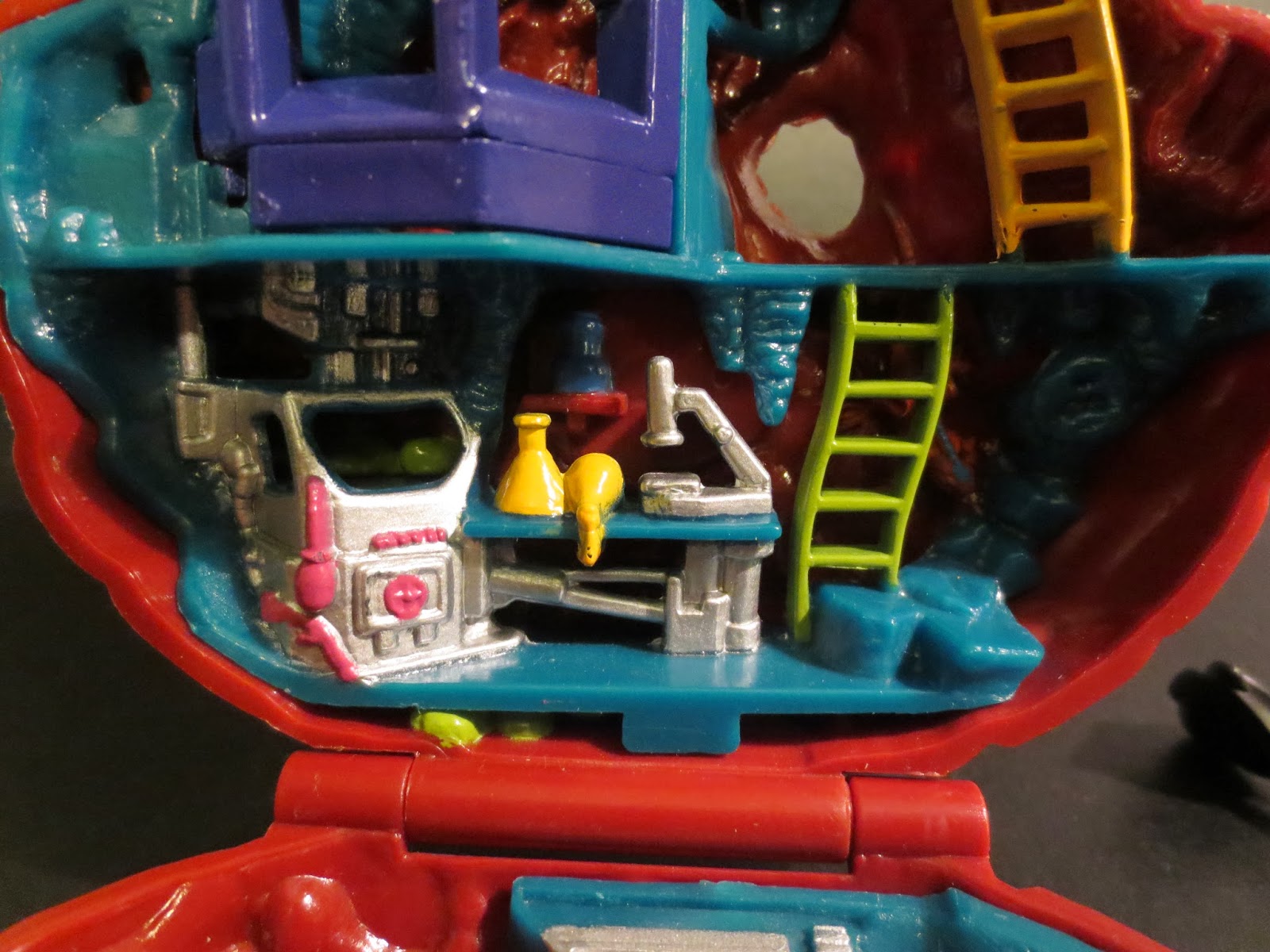 The rear wall of the set is the lab portion of the Dino Lab. The first floor is a laboratory complete with beakers (one is actually knocked over and spilling out), microscopes, and an incubator. Not only are there dinosaur eggs back in the incubator but there also seem to be some hidden under the floor. I guess this set was trying to teach kids that life find a way. There is a ladder that leads up to the second floor to where..... 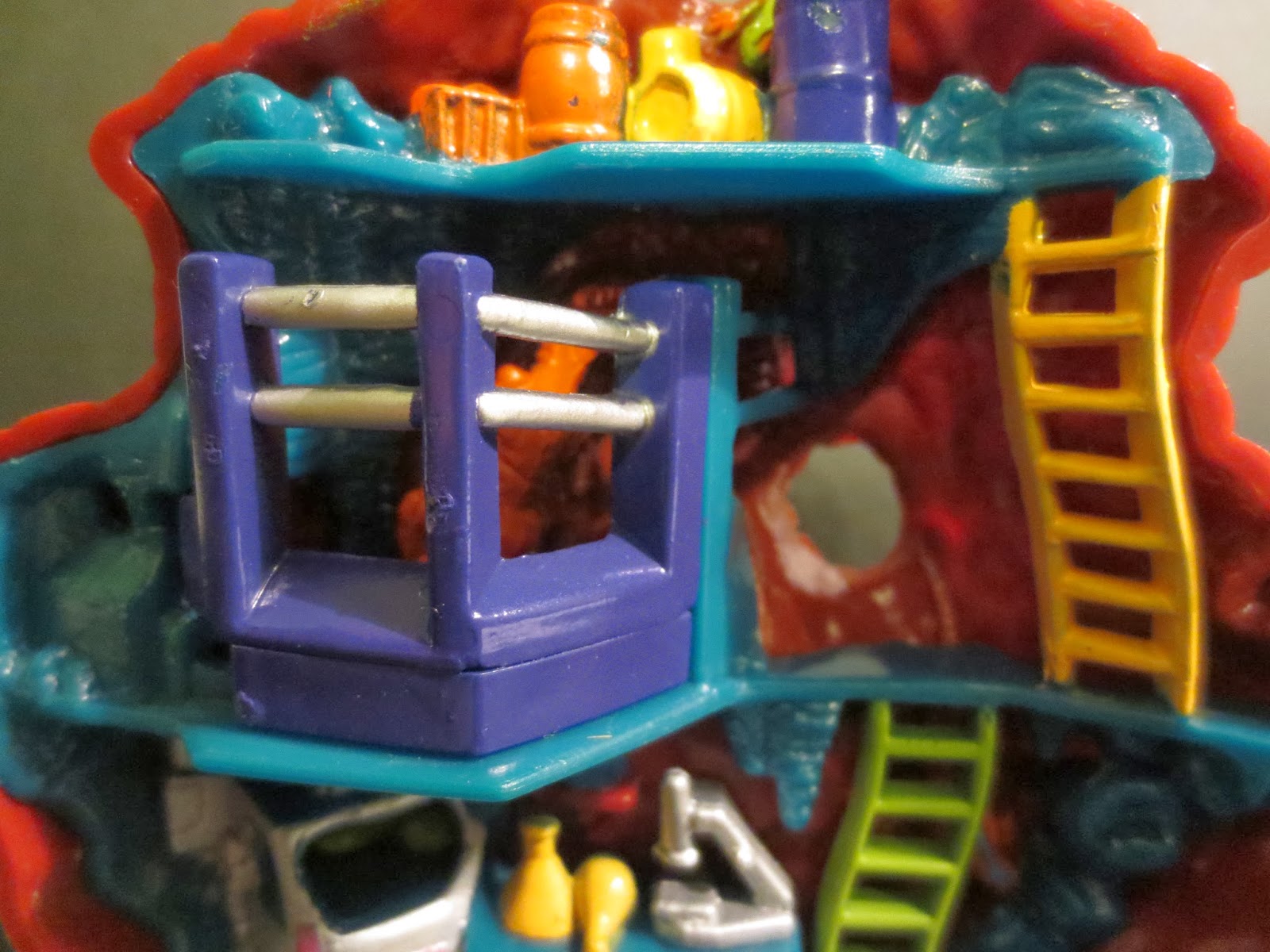 The velociraptor pen is! The pen is on a hinge and can swing out to store the raptor (or Professor Zygote) inside. It's a cool feature. Check out that curvy yellow ladder on the right, though. Wouldn't that be a pain to climb up and down? 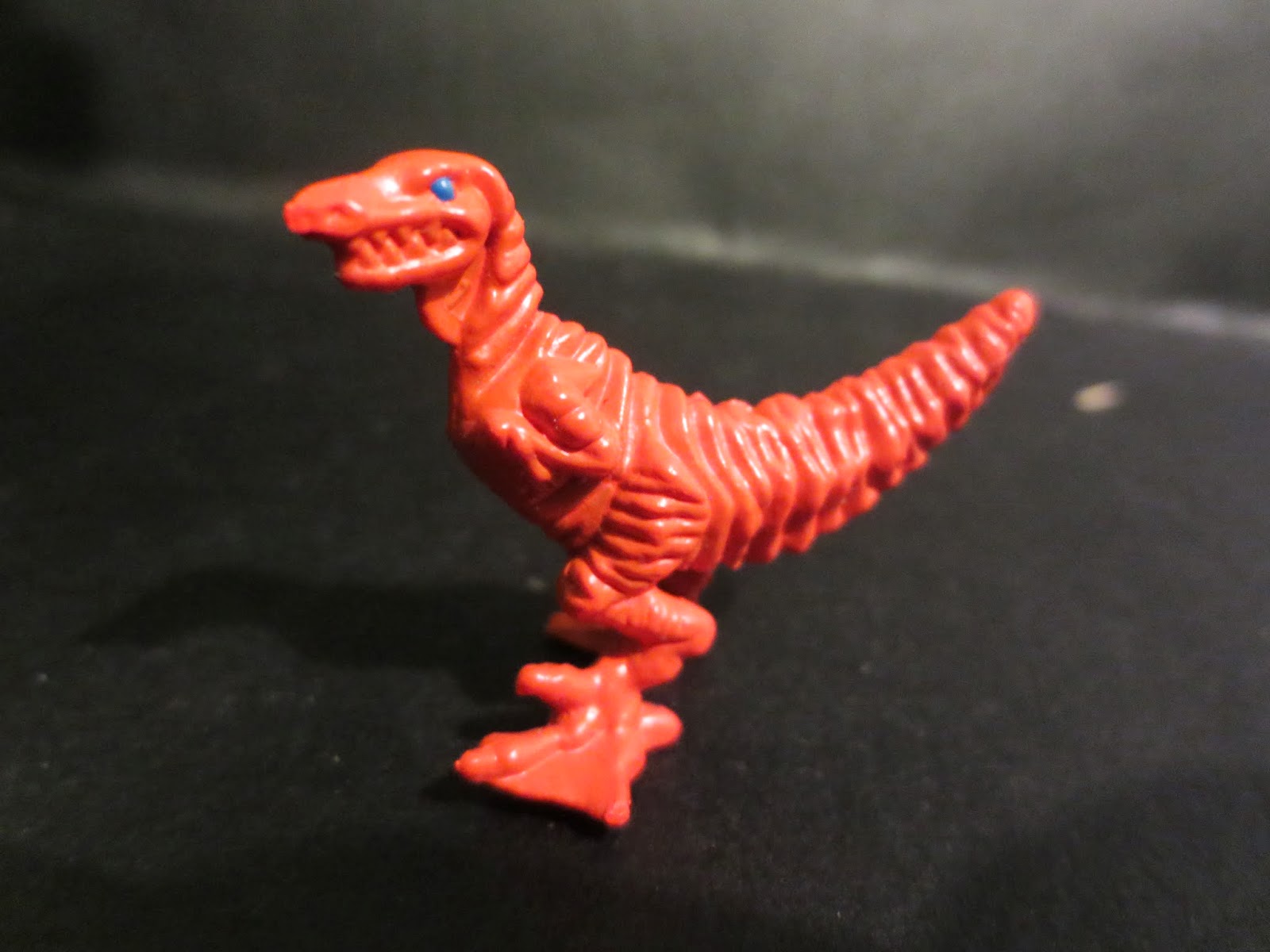 Here's the raptor. He's...kind of odd looking. He's bright orange with blue eyes (must be Scandanavian) and some decent sculpting, but his arms look awkward. They're teeny tiny and look more like chicken wings. He does have some sharp looking teeth though. 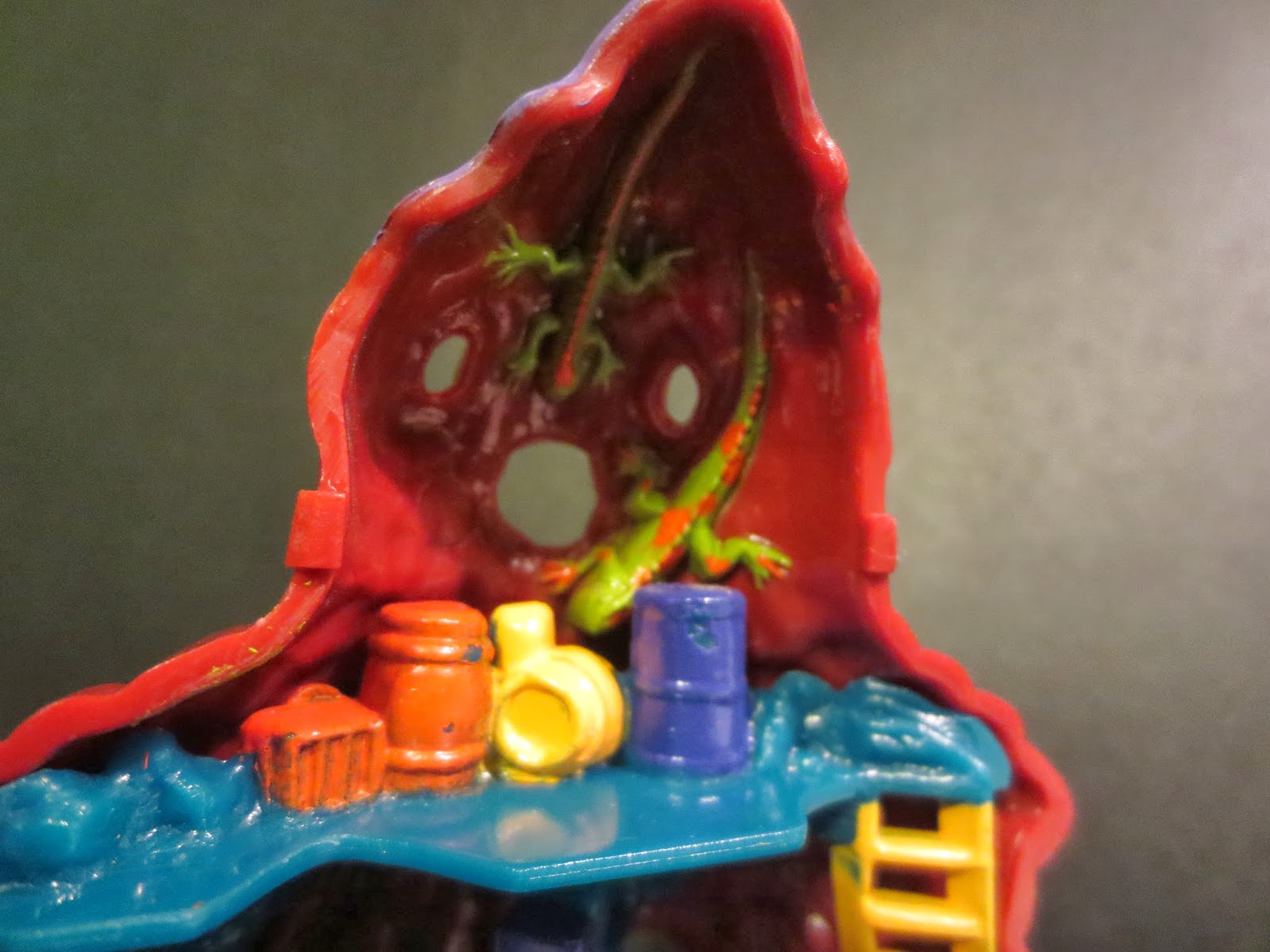 The third floor has some lizards climbing the walls and various barrels of various chemicals and junk. Who knows what could be in these? Someone had better call Walter Peck because I think the EPA might be interested in this. 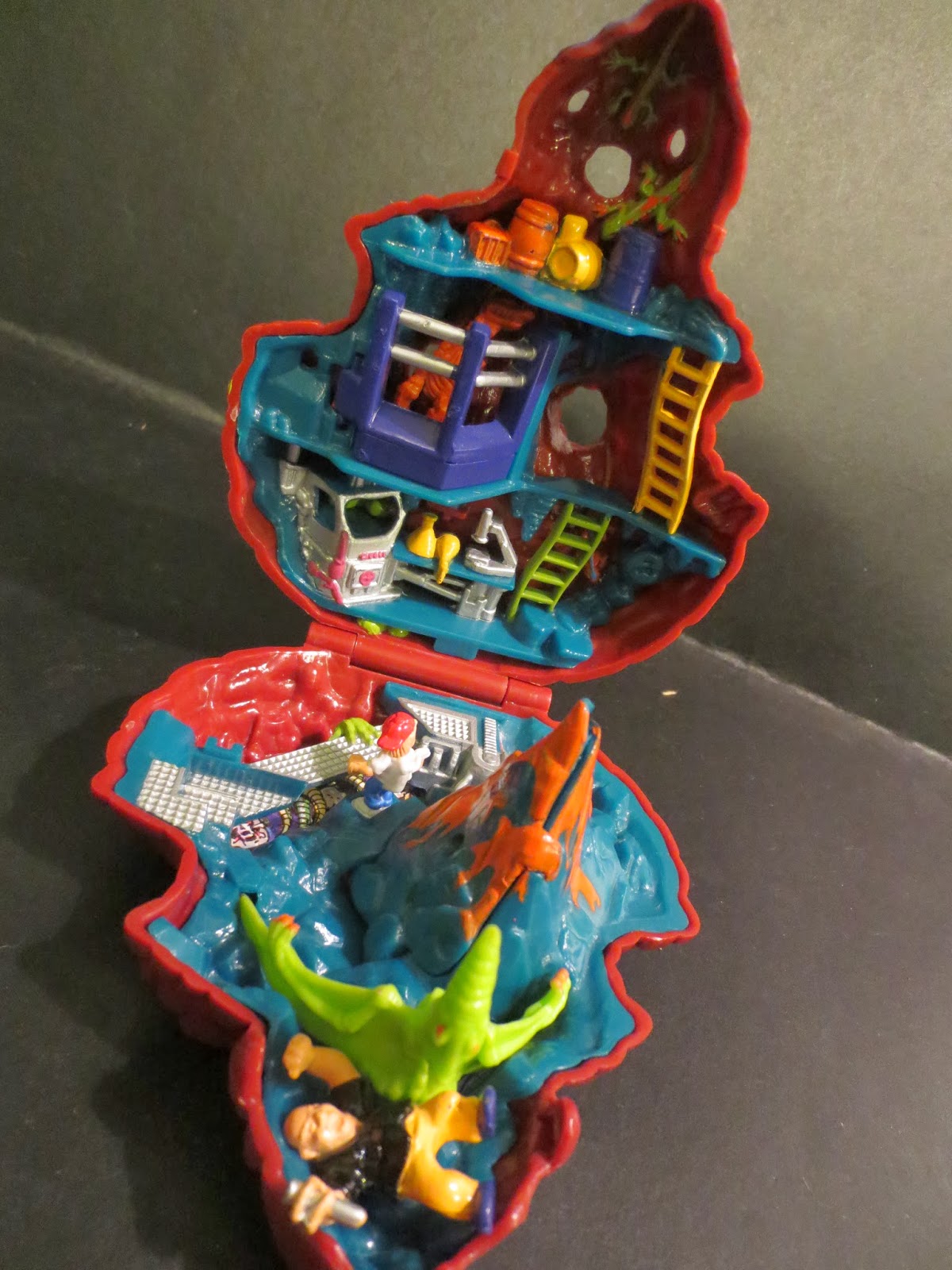 When storing the set, Max can stand in his designated spot, the pterodactyl slides into two notches near the front of the set, and Prof. Zygote rests in the front rocky alcove. The raptor goes in his storage pen and the set is ready to be stowed in your pocket for recess! 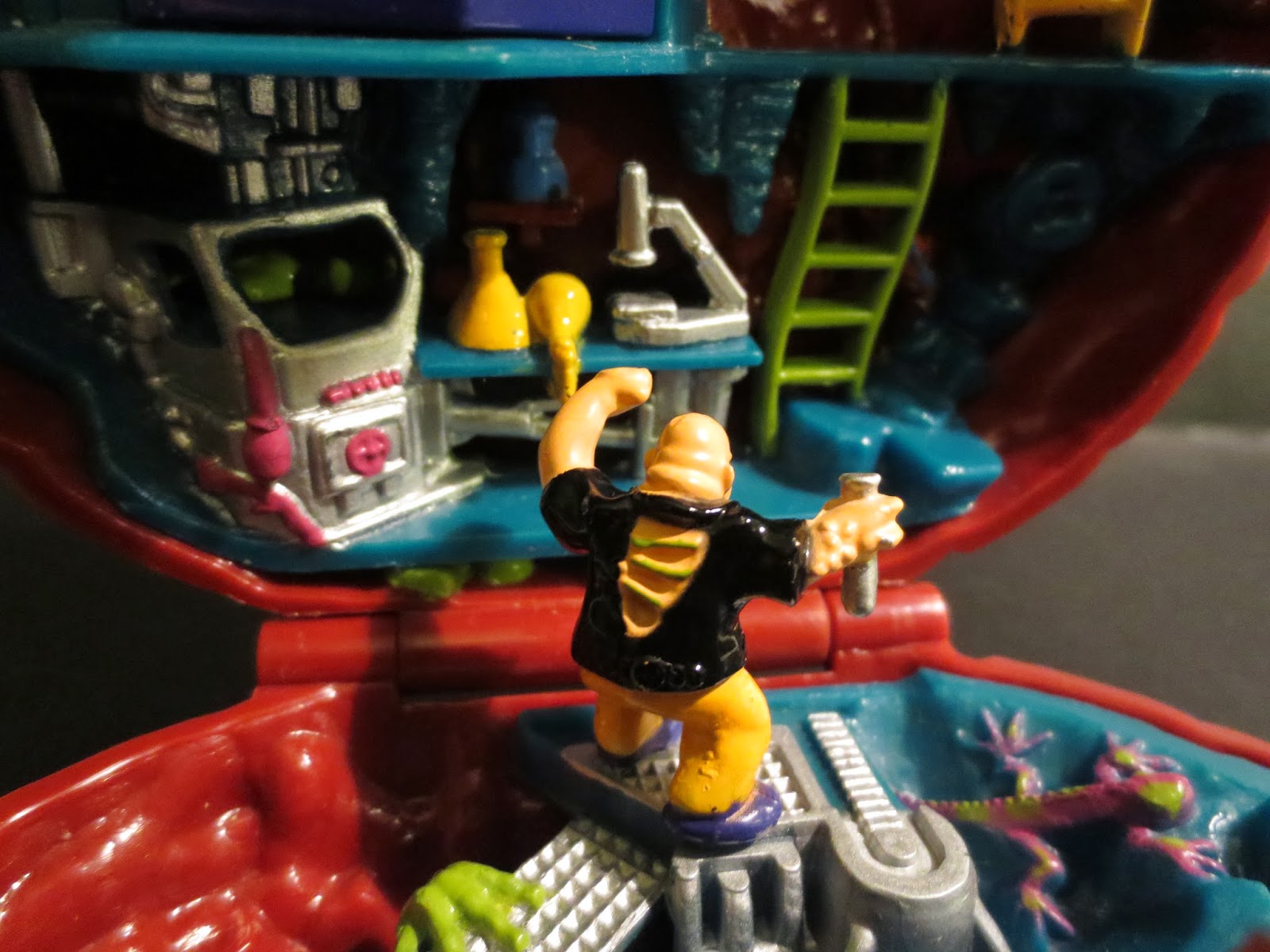 Having always wanted this set as a kid I was super excited to get it in the mail last week. It's definitely a worthwhile set, but I'm not sure it ranks as highly as other Doom Zones. I think overall, I'd give this set a Great rating. Prof. Zygote is pretty cool and I love the base of the set with the volcano and creature emerging from the sludge, but the back wall doesn't really have any room for much play. The pterodactyl is a great microfigure but the raptor is a little weaker than he could have been. It's a fun set, though, and I'm glad to have finally added it to my collection. It's fairly easy to find so you might want to search around for one at a good price if you like dinosaurs, Mighty Max, and pterodactyls. Join me again next wee for another installment of Micro Monday!

I hope to soon get around to some Star Wars Micro Machines sets, too, but for right now I'm sticking to Mighty Max. So far I've covered:
Mighty Max Conquers the Palace of Poison
Mighty Max Challenges Lava Beast

If there is a specific set you want me to review, leave a comment or send me an email at thepicreview@gmail.com! I'll do my best to try and review it (if I have it).