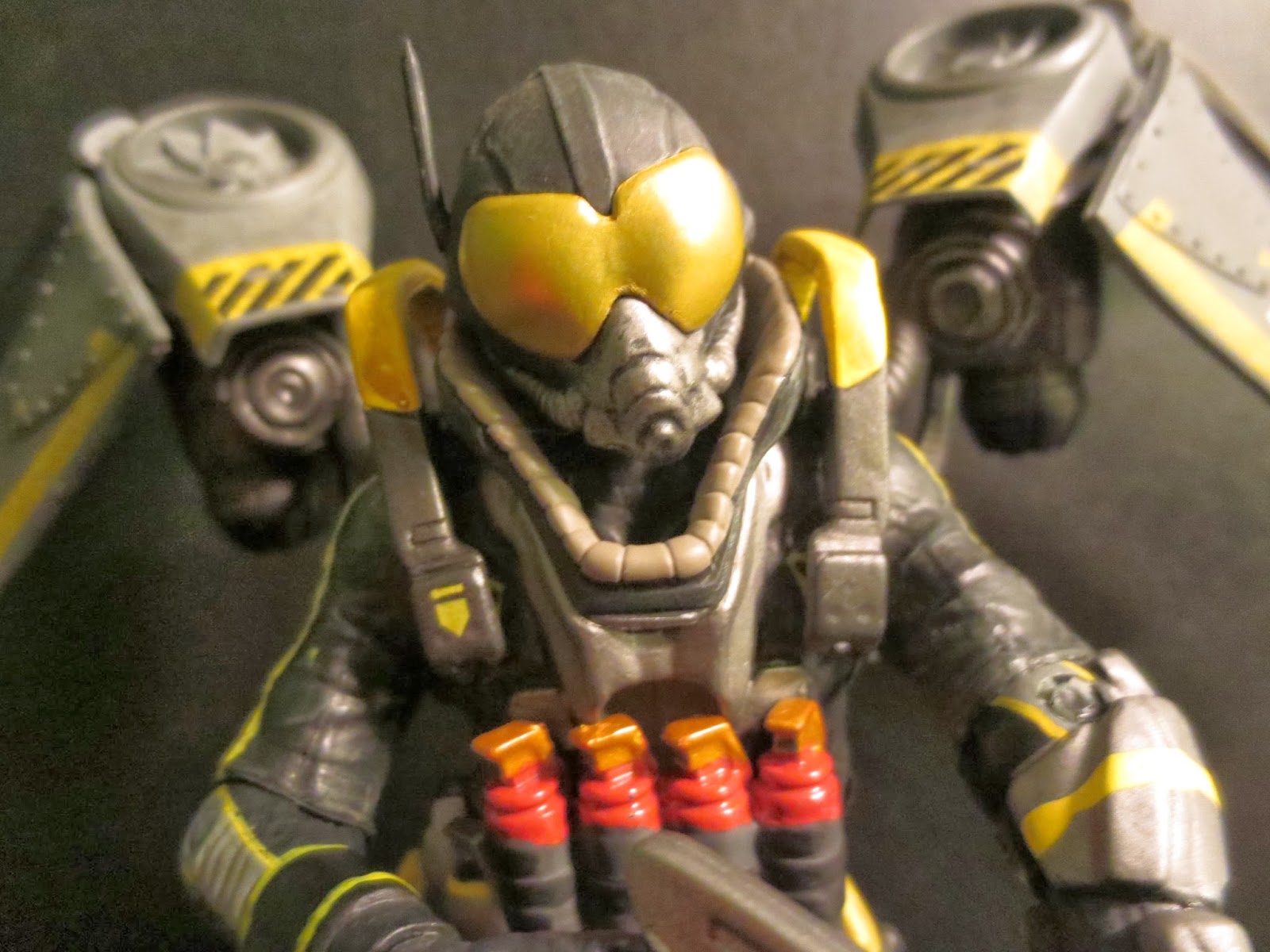 First appearing in Detective Comics #184 in 1952, Firefly is not one of Batman's more well known enemies. Honestly, I'd probably put him on the C-list. He's not completely obscure as he was featured in The Batman, Batman: The Brave and the Bold, and Justice League and played a pretty major role in the Knightfall and Batgirl: Year One, but it's still great to see him getting some more exposure through his appearance in Batman: Arkham Origins. While not the most recognizable of the eight assassins hired by Black Mask to kill Batman on Christmas Eve in Gotham City, I think I can safely say that Firefly ends up giving Batman the best boss battle of the game. I'm always excited to get a Batman villain who we haven't seen too often before (or at all) in action figure form. While a Firefly action figure was released in Mattel's The Batman and The Dark Knight lines (even though he never appeared in the film), this is the first time we've received this character in the 6-7 inch scale that most Batman fans collect in. Ready for a look at Firefly? Then join me after the break.... 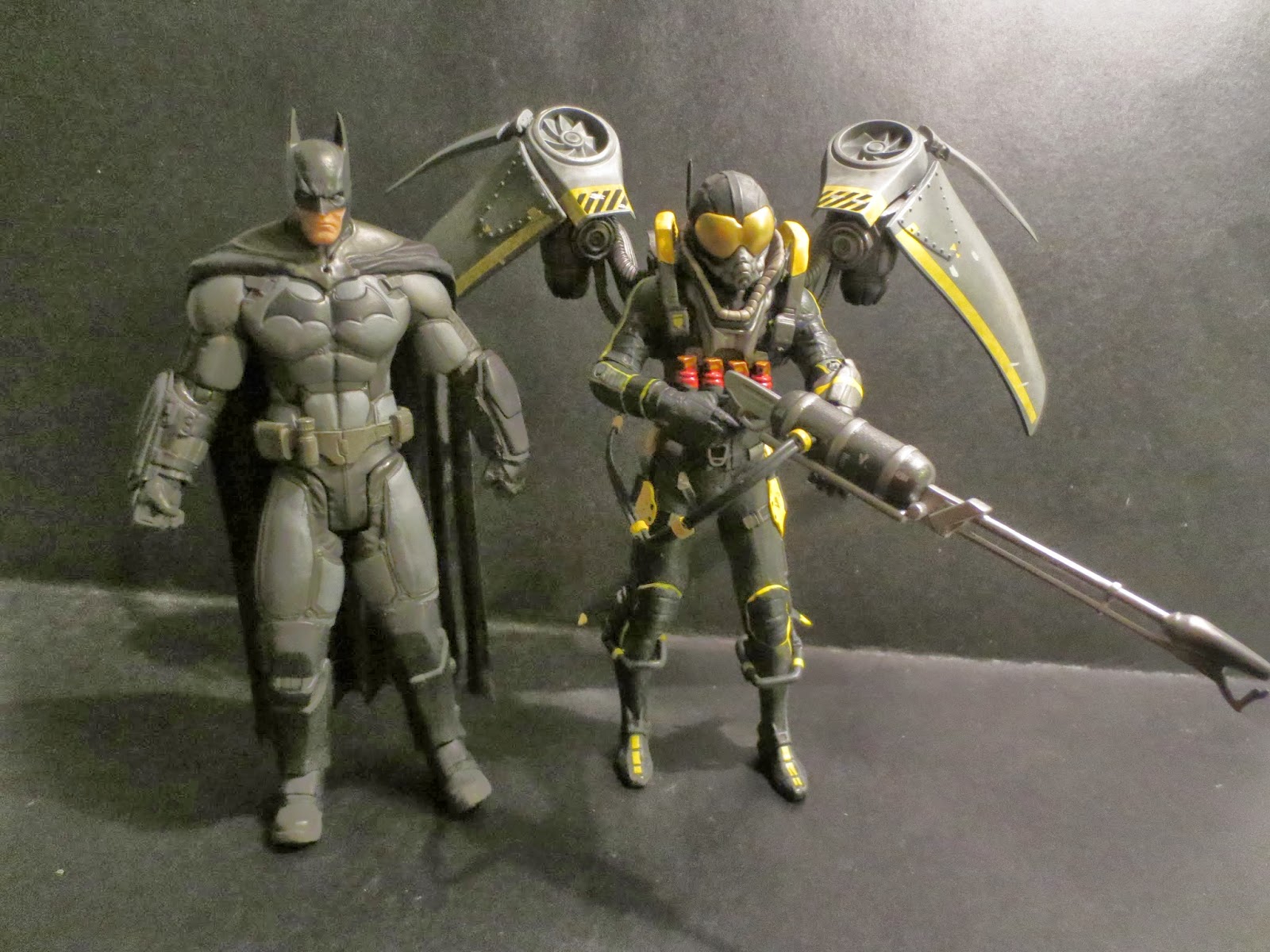 Like the rest of his Arkham Origins brethren, Firefly stands about 7 inches tall. There are two different villains named Firefly in DC Comics: Garfield Lynns and Ted Carson. This Firefly is Garfield Lynns, who is definitely the more well know of the two villains. The Arkham Origins figures have a great look to them that perfectly replicates the in-game look. It's kind of half way in between the realism of a NECA movie figure and the comic book styling of your typical DC Collectibles or Mattel release. 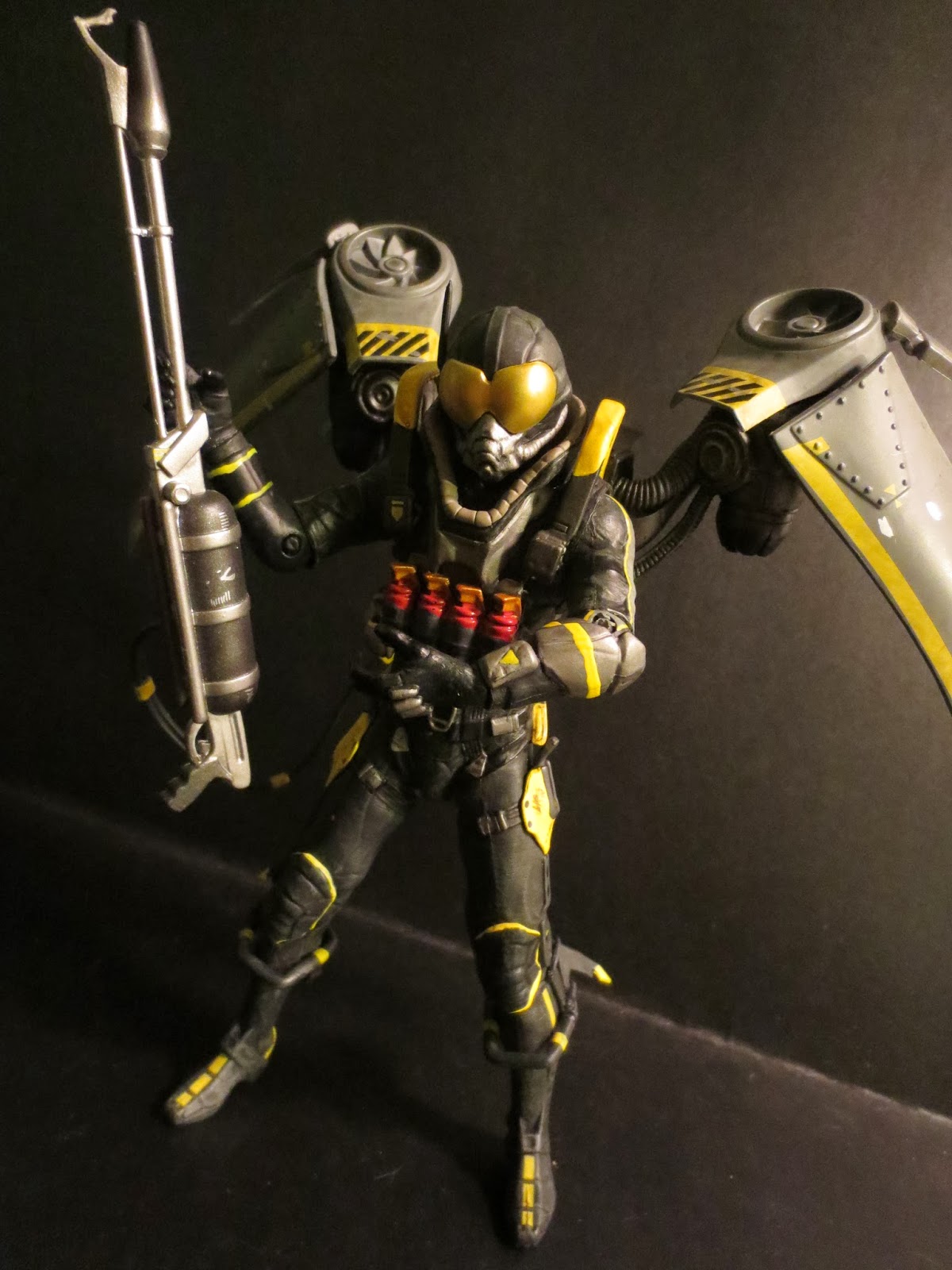 Unlike most of the other Arkham Origins figures, Firefly's articulation isn't overly impressive . He's not a statue or anything, but he's definitely much more a figure you'll by due to the sculpt than because of the scads of articulation. He features: hinged knees, swivel/hinge hips, swivel/hinge shoulders, swivel/hinge elbows, swivel wrists, and a ball jointed head. While you can finagle his arms into a proper pose to hold his flamethrower, you're not going to be able to do much different with his legs. I'd love if this guy had come with a flight stand or something. The head is a little bit limited (due to the bulky helmet and the jet pack shoulder straps) and the lack of swivel/ hinge wrists is disappointing when everyone else has them. Once again, not terrible but not as good as anyone else in the same series. I think I'd be OK with no leg articulation if he has those hinged wrists. 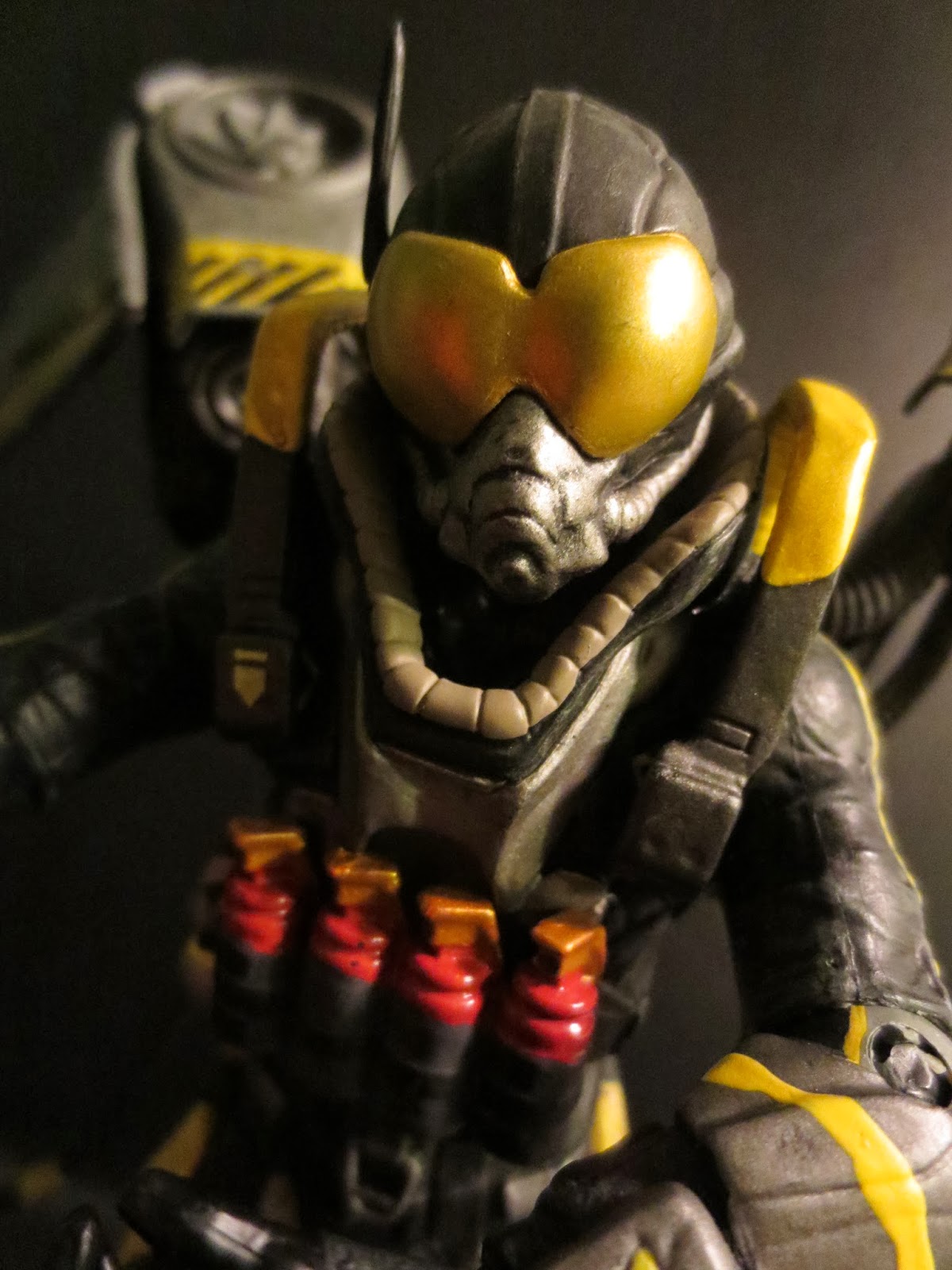 The sculpts on all of the Arkham figures have been quite impressive although they definitely look different than DC Collectibles' standard figures based on the New 52. Part of me wonders if these guys are sculpted digitally based on the in-game models or something because that's what they resemble. I love Firefly's redesign in the game and it is captured perfectly here. His bodysuit has a great texture to it that definitely makes it look like some sort of fireproof material. While his jet pack is mostly a separate piece (so I'll cover it below with the accessories) there are still parts of his flight rig that are attached to his body. The harness that keeps the pack attached to Firefly (as well as some armored leg stabilizers) look awesome. I'm loving the insect-like helmet as well. It's very subtle, but the large bug eyes of the visor and the elongated breathing mask still convey the details of Firefly's more classic looks. 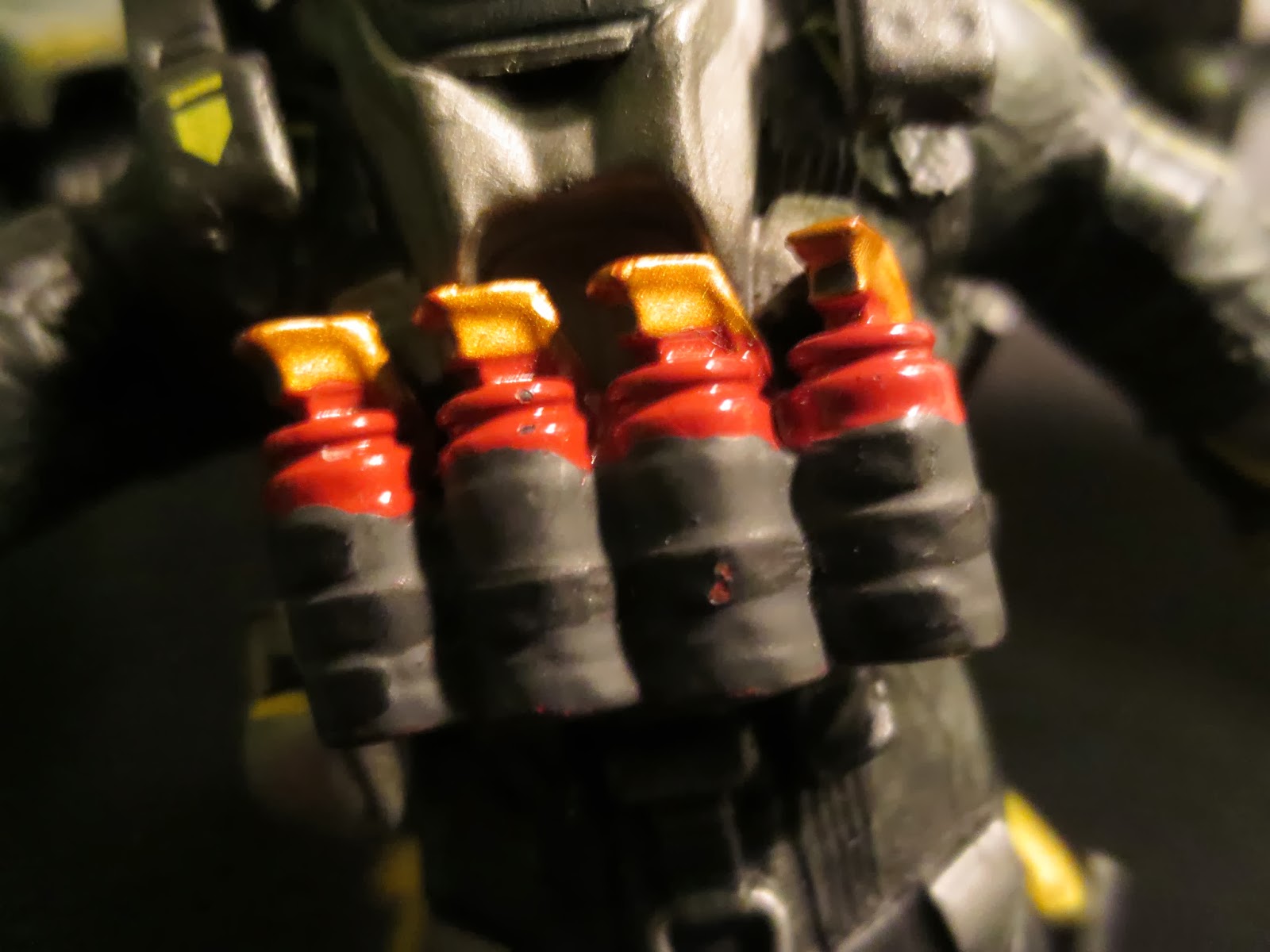 Sculpt and paint are definitely the two strongest areas on DC Collectibles' figures and ol' Garfield here doesn't disappoint. His combination of various shades of grey with a bright yellow trim is really quite eye catching. It's definitely a color scheme that I can't recall any other Batman villain having. Few of the black armored bits are flat or dull as most have some nice dry-brushed elements to them. The yellow trim is pretty near over all (the knee pads are a little wonky) and is had some great dry-brushing to give it a great, semi-charred (kind of life) look. Seriously, you can't spend as much time starting fires as Firefly does and keep a yellow costume clean. Wow they missed those paint apps on Deathstroke, on Firefly his various grenades are given multiple paint applications to help them stand out. Overall, this is an excellent paint job. 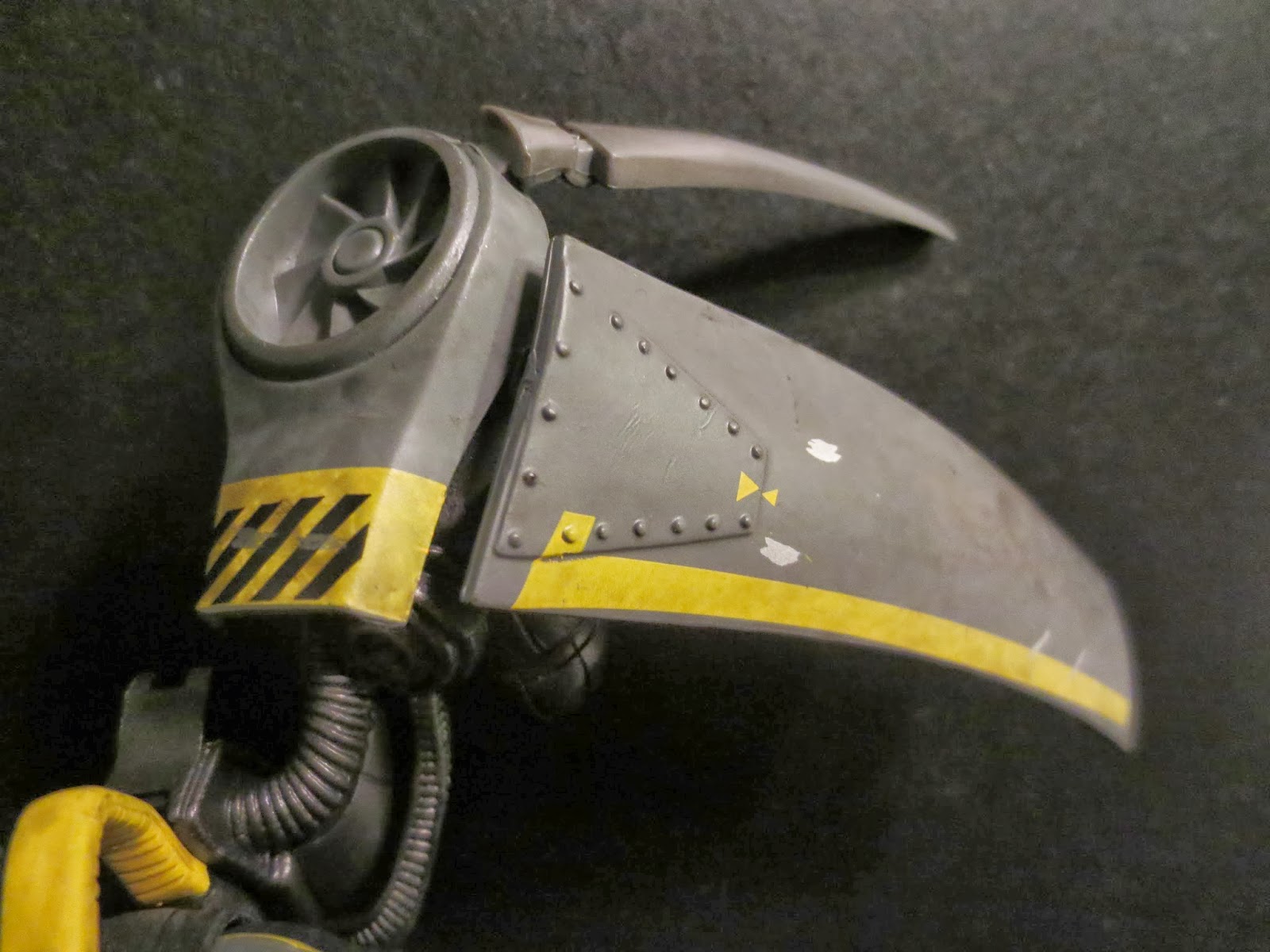 So, I guess you could say Firefly technically has three accessories. But one of them, his flamethrower, is actually permanently attached to him via a soft, flexible cord. The other two, his wings, are meant to attach to his back and stay there. Yes, they're easily removed, but they're really part of his look. I don't know about any better place to talk about them though, so they go here. let's start with the wings. They're two separate pieces that look awesome with lots of rivets, tubes, and their own turbines. They've also got some great paint apps to not only give them some yellow details but also a coating of ash and paint scrapes. Once they're attached, Firefly has a wingspan of about 8 inches across. He's quite impressive with these suckers on. 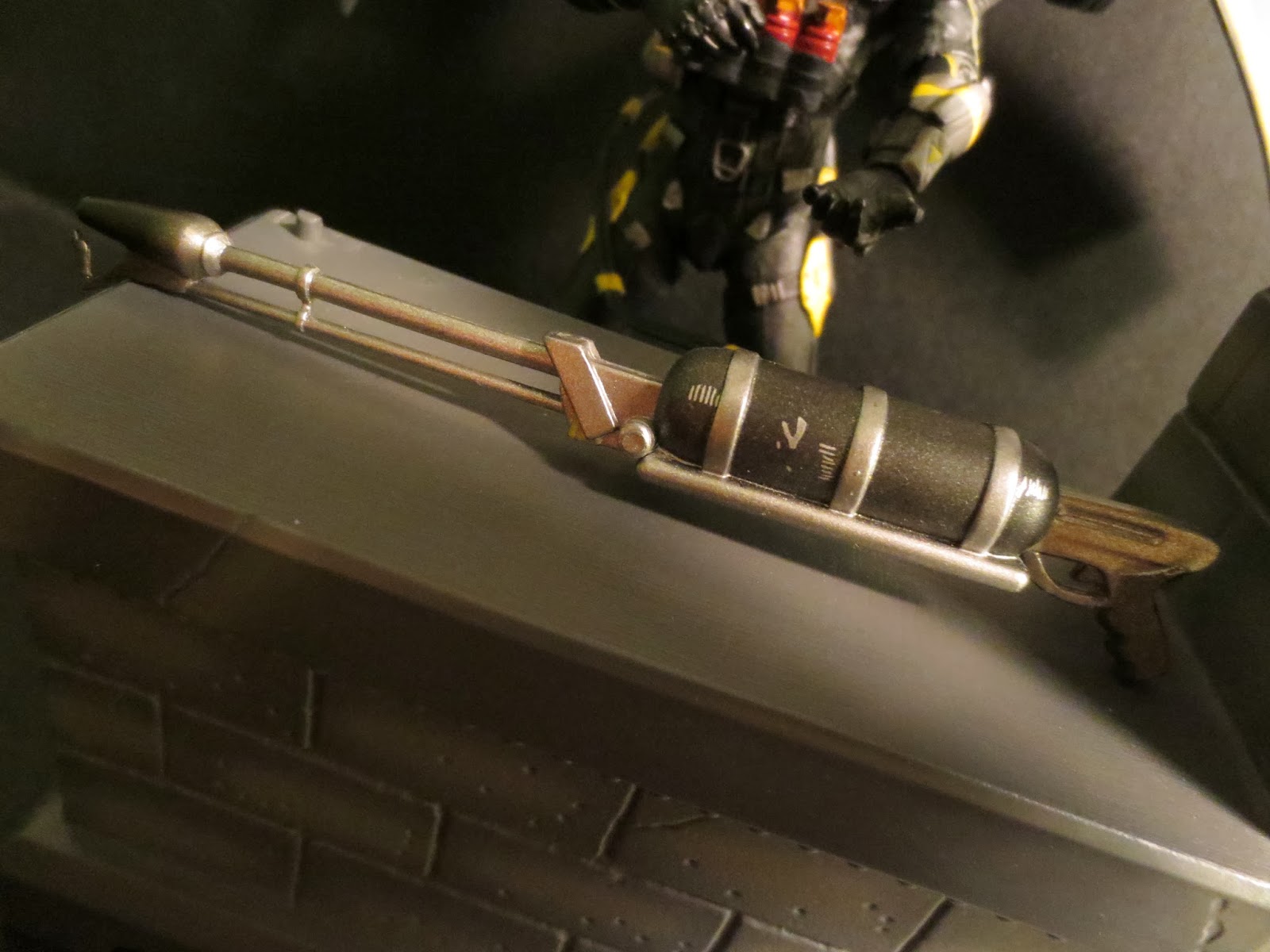 His flamethrower is another nice piece. As mentioned above, it is permanently attached via a soft cord hooked to his back. To really hold the flamethrower up you'll need to stow its handle in Firefly's right hand and have him cradle the mid-section with his left. It looks great with plenty of details like the fuel tank, the ignition spout on the end, and a few paint apps to give it a worn, singed appearance. Honestly, the only thing that could have been cooler is if this guy had been a deluxe figure with a flight stand and some translucent plastic flames. 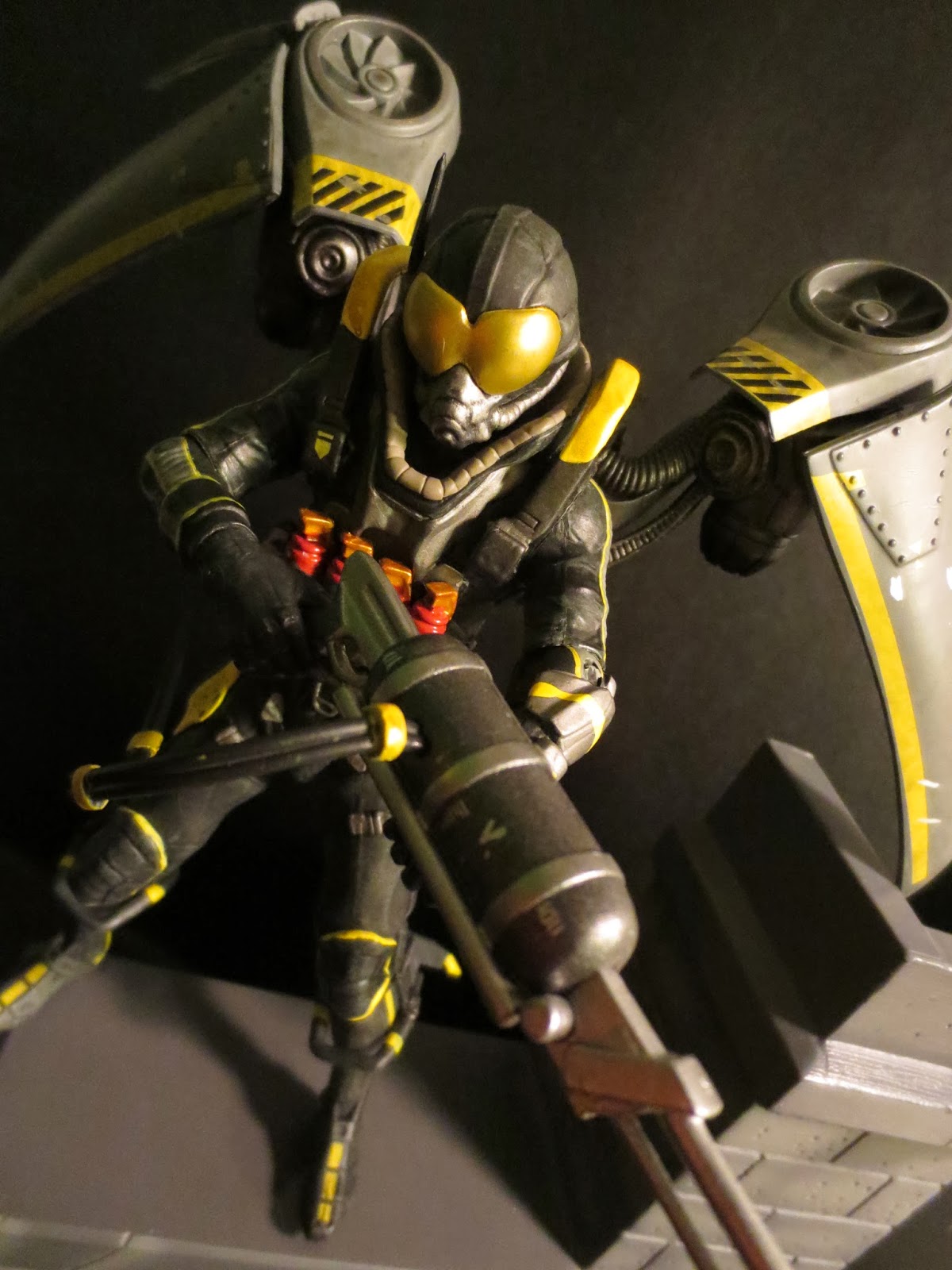 It's tough to say who is the star of Arkham Origins series 2. Anarky is fantastic but both Killer Croc and Firefly are some of the best figures DC Collectibles have produced. My only complaint about Firefly is the lack of articulation on his wrists and ankles. Otherwise, he's just spectacular. This is the kind of figure that I can see lots of non-Batman fans (if such people exist) going nuts over because he would work well with so many other video game based lines. I could easily see him in a Metal Gear or a Gears of War display. Overall, I'm giving Firefly a Great and a 1/2. He's easily the best Firefly figure ever made, granted he's also only the third. Still, he's in the top 33% of Firefly figures, and that ain't bad. 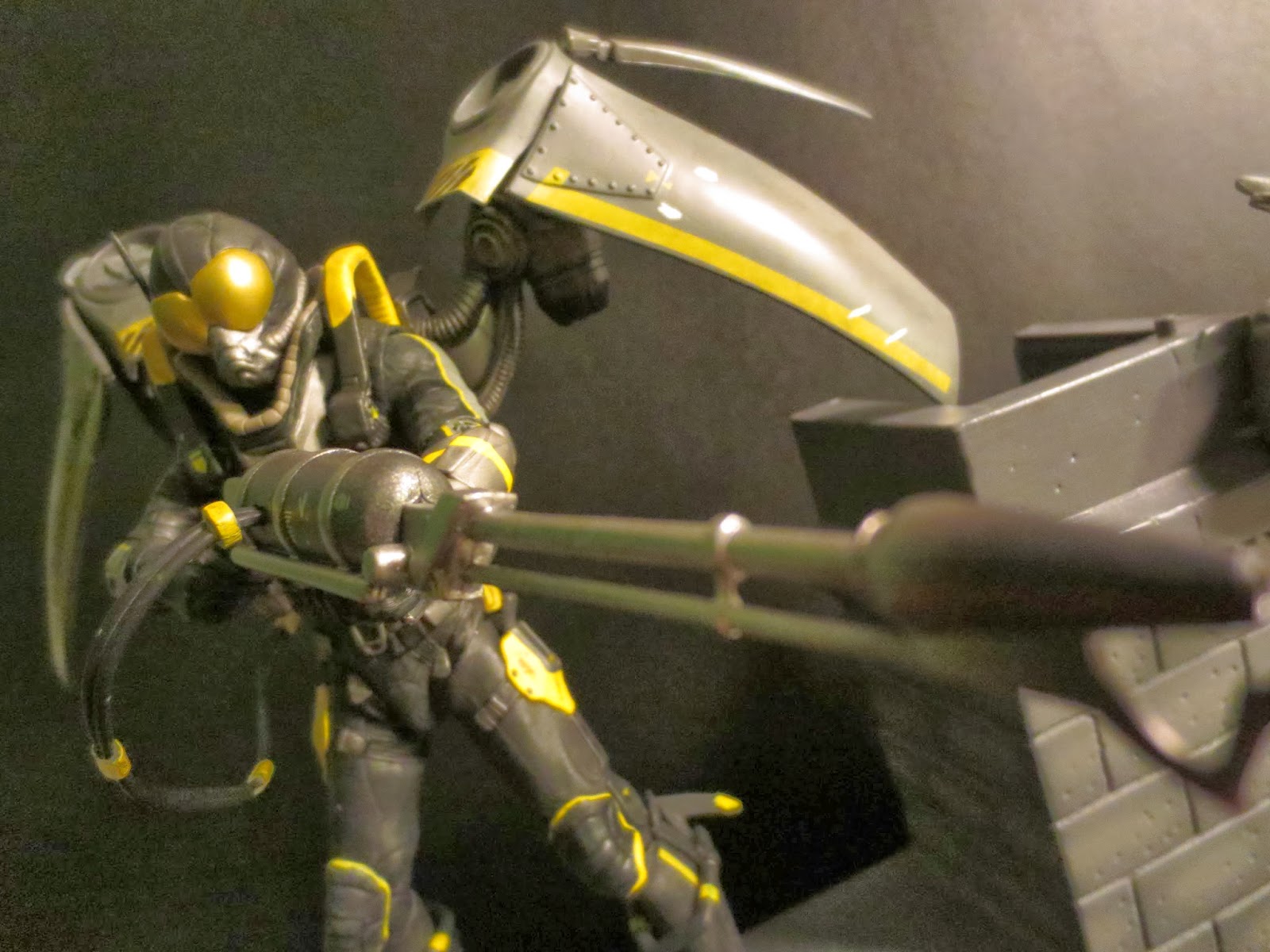 Head on over to Big Bad Toy Store and get your own Firefly while you still can. This deal is too hot to stick around. Get it before it goes up in smoke. Strike while the iron's hot. Are you enjoying these fire themed puns? If so (or even if not), check out are our other Arkham-verse themed reviews: