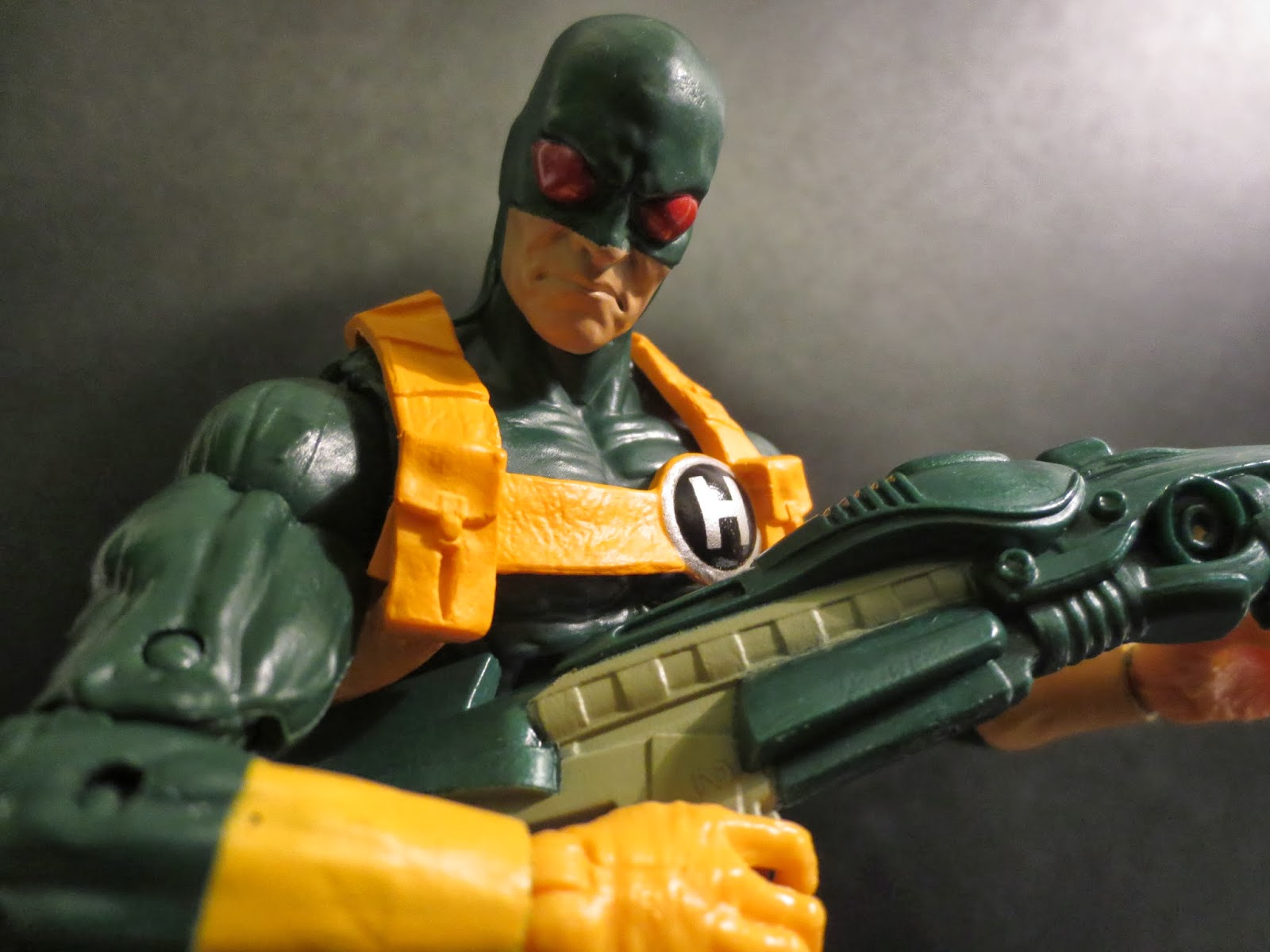 Who doesn't love a good army builder, am I right? As a kid didn't we all want multiple Stormtroopers, Horde Troopers, Foot Soldiers, or Vipers to fight our heroes? In the new series of Captain America Marvel Legends (which is actually titled "Marvel Legends Infinite Series- Captain America: The Winter Soldier") we get not one, but two army builders: the A.I.M. Soldier and the Hydra Agent, which I'm looking at today. Actually, if you consider the Build-A-Figure, Mandroid probably counts as an army builder as well, but who could afford to do that? Hydra Agents are the green and yellow nameless, faceless legions of Hydra and they're ready to take on your Captain America figures. I've already complained about Hasbro's weird use of variants here (since this guy is technically a "variant" of Red Skull, because that makes so much sense) so let's just jump into this review. Just make sure to shout "Hail Hydra" as you join me after the break.... 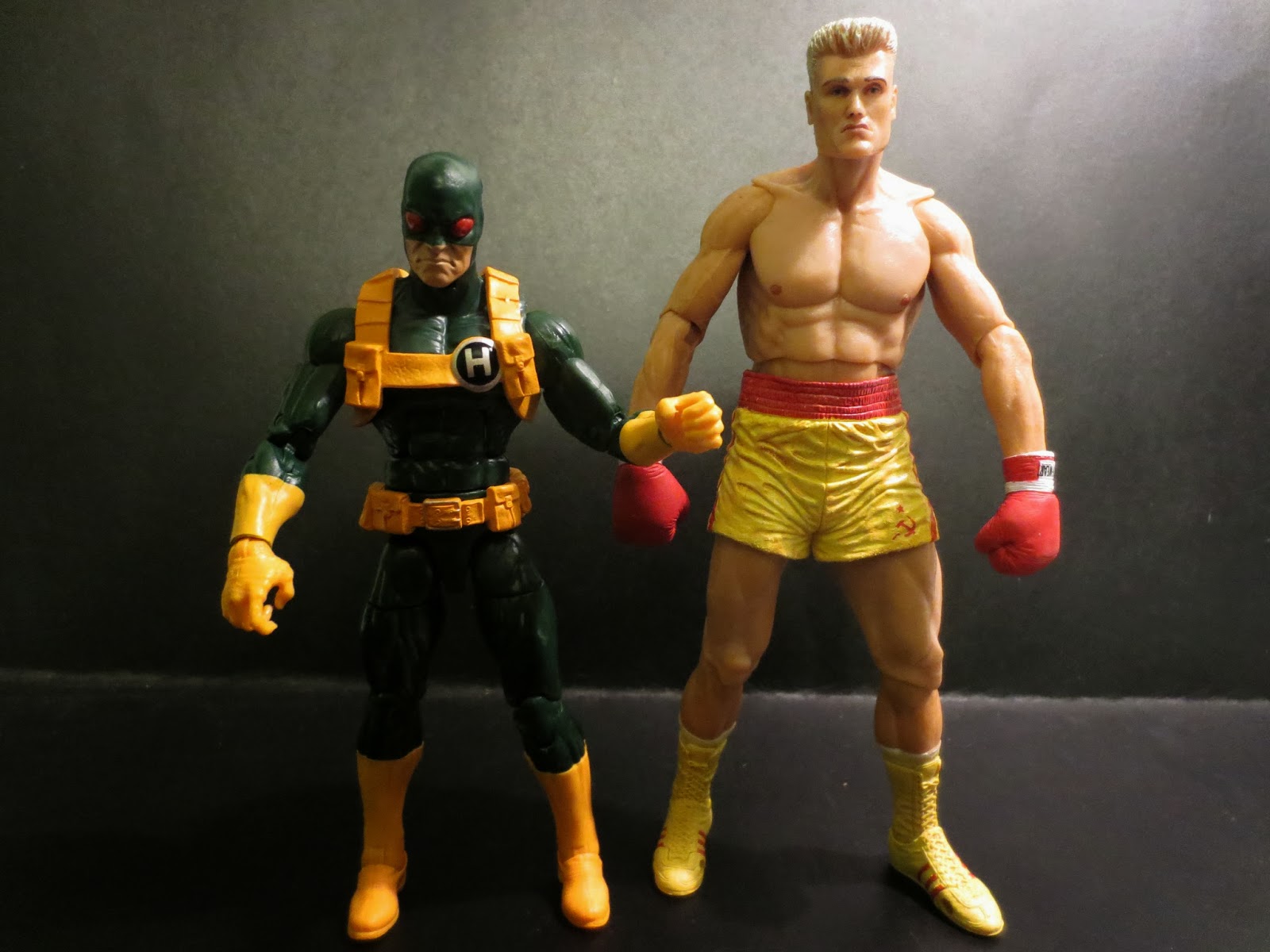 This Hydra Agent stands about 6 1/2 inches tall which seems pretty reasonable in this line. Hasbro released a Hydra Agent in their first run of Marvel Legends figures that had a more classic outfit, but which also stood closer to 7 inches. While I guarantee that large parts of this figure are reused I'm not enough of a Marvel Legends junkie to put a finger on it. He has a pretty standard looking body so this may have shown up on any number of costumed characters. I mentioned it in my review of the Red Skull, but I'll repeat it here: I really like the boxes Hasbro is using for these. Much like Star Wars Black, these feel very elegant, are quite collector friendly, and take up much less space than a traditional blister card. Of course, these guys have also jumped up to $20 bucks each, so I'm going to be pretty picky about which ones I pick up. In fact, both this guy and Red Skull aren't even mine. I'm reviewing them for the Reel Brad Bell since he's too busy buying Hot Toys and Mondo Posters and having Star Wars themed birthday parties. 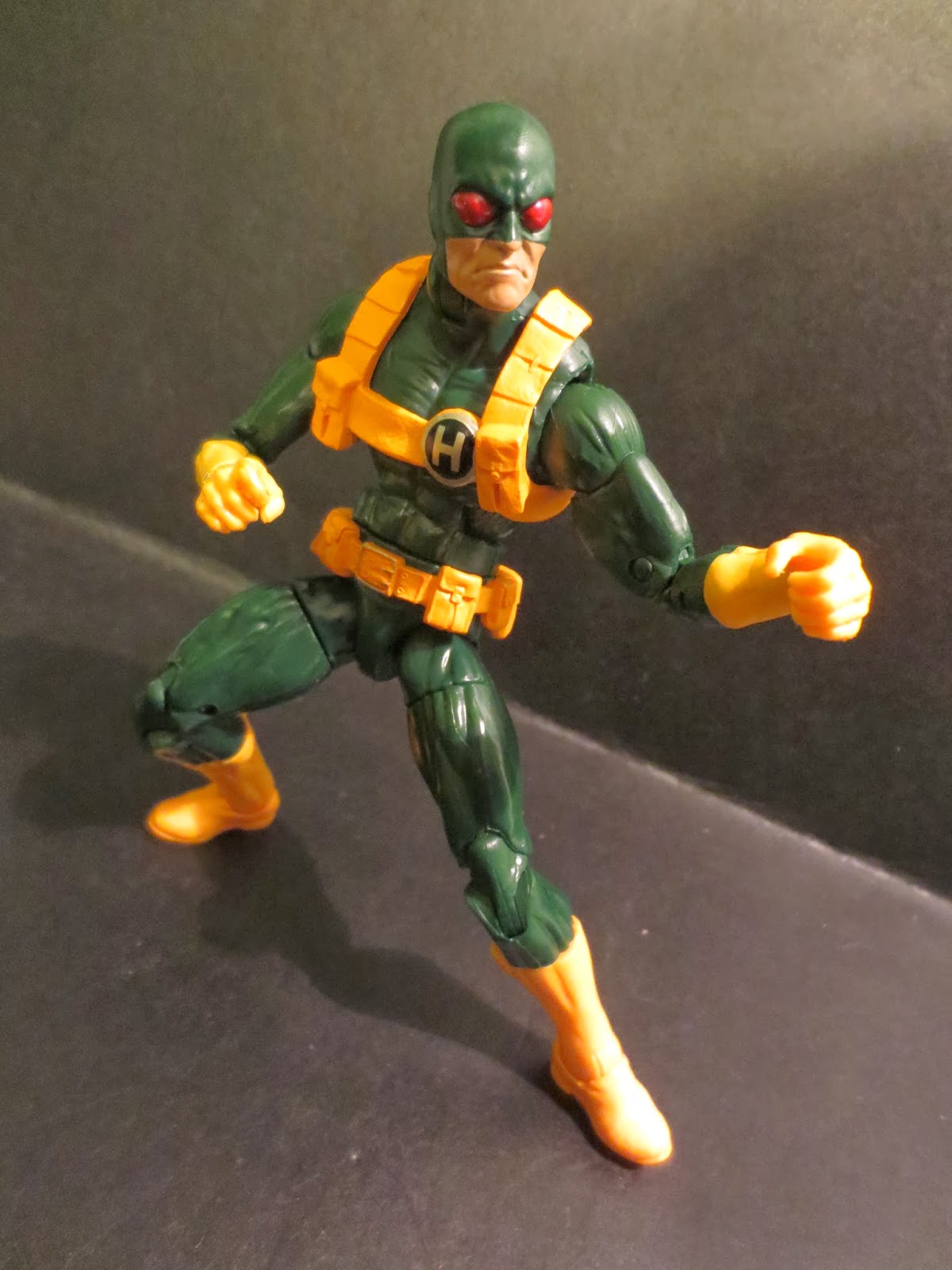 The Hydra Agent's articulation is definitely from a newer Return of Marvel Legends body as it doesn't have those classic Marvel Legends hips that I hate so much. The Hydra Agent features: swivel/ hinge ankles, swivel boots, double hinged knees, swivel thighs, ball jointed hips, a swivel waist, an abdomen hinge, swivel/ hinge shoulders, swivel biceps, double hinged elbows, swivel/ hinge wrists, a hinged neck, and a true ball jointed head. That's a lot of articulation and I like almost all of it! He has great motion all around and feels really nice and sturdy. Many of the joints have teeth so that they somewhat click into place, a feature that is nice to prevent joints from loosening over time. A few joints feel a bit loose, such as the neck and the abdomen, but not so bad that they're problematic. He has all the articulation he needs to get pwned by Cap and Black Widow. 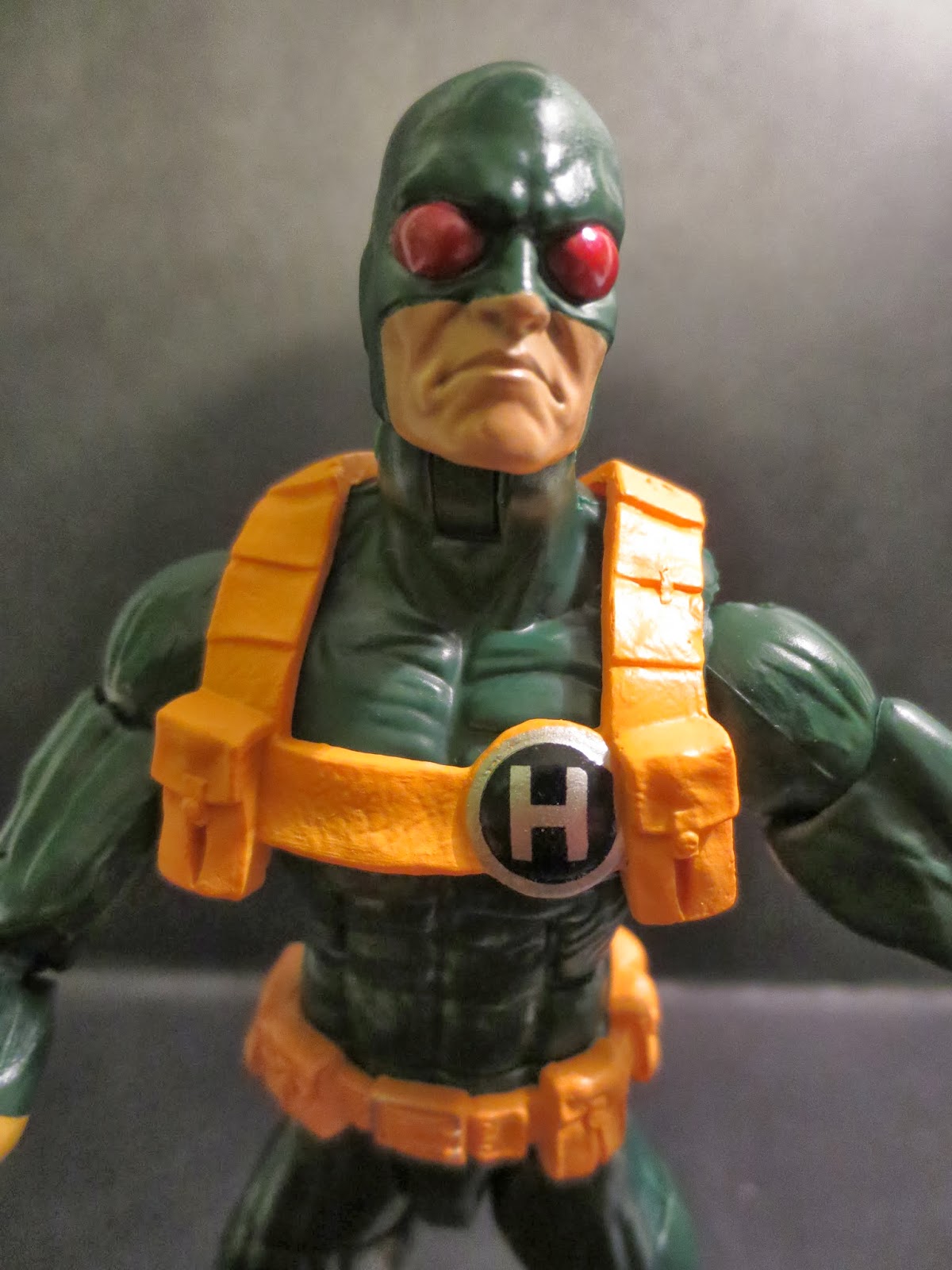 As I mentioned before, the uniform design on this Hydra Agent is much different than the Hydra Agent that appeared in Hasbro first go at Marvel Legends. While that guy was wearing more of an old school henchman's outfit this Hydra Agent is wearing what looks like a one piece bodysuit. This guy looks really ripped as his muscles are definitely showing through every inch of the costume. The gloves are just painted on, not part of the sculpt, as are the boots. I really think a better body could have been found for this guy since the Hydra Agents aren't really superhumans but just regular evil dudes. His belt and harness are nice, though. They don't perfectly match the look of the typical Hydra Agent where the shoulder straps attach to the belt to make an "H" shape, but they're still suitable. The belt is covered with pouches of varied sizes and has a realistic looking buckle. The harness is simple but has a pouch on each side of the chest and a round Hydra badge. I like the headsculpt and would be willing to say that it's the high point of this figure. The eyes are really well done and he has a nice sour look on his face. It's not overdone, but still makes this guy look plenty pissed off. 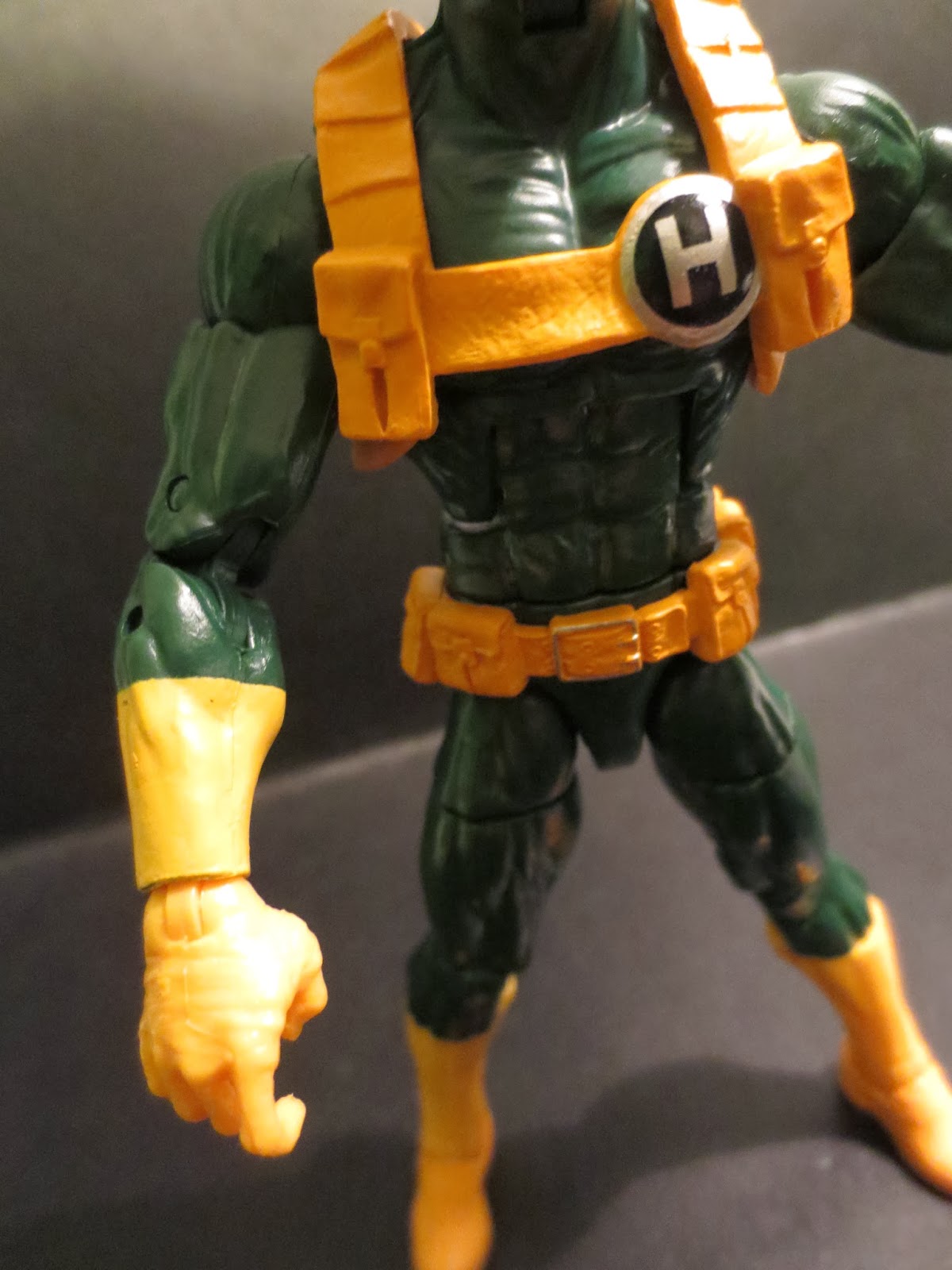 Yellow can be a really tough color to work with when it comes to paint, particularly when it is used in conjunction with a darker color like green. I'm going to say that here, Hasbro was about 95% successful in making the yellow paint look great alongside the green. Only the part of the "gloves" that extend to the forearms show any of the darker green plastic underneath. Everything else is pretty simple paintwork, really. The color of the belt and harness don't quite match the boots and gloves, but it isn't terribly noticeable. Those would probably be made of different materials, anyways. 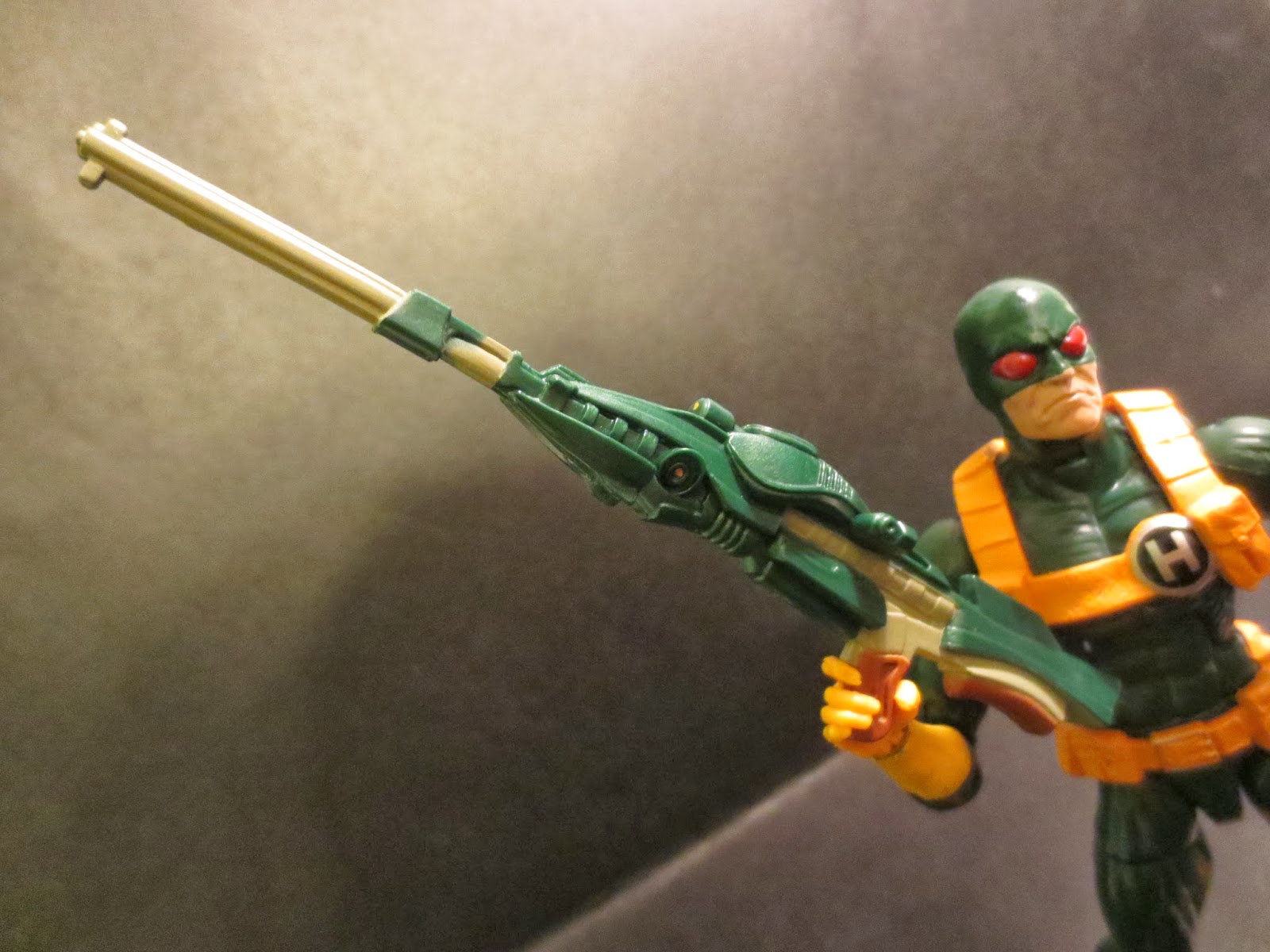 Like the Red Skull in this same series, the Hydra Agent is also nicely armed. In fact, this guy has two of the coolest weapons I've seen in a long time. First, let me mention that his harness is removable. There is a peg under the right chest pouch that lets you remove the piece. I'm not sure why you'd want to remove it (perhaps for making a custom or adding your own unique armor to these guys) but it's an option. As far as weapons go, first you get a really awesome rifle. It's got multiple paint applications (even some little yellow dots on the sides that you can easily miss) and a great sculpt. It like like a real blend between older style firearm design and alien technology. I'm loving it. 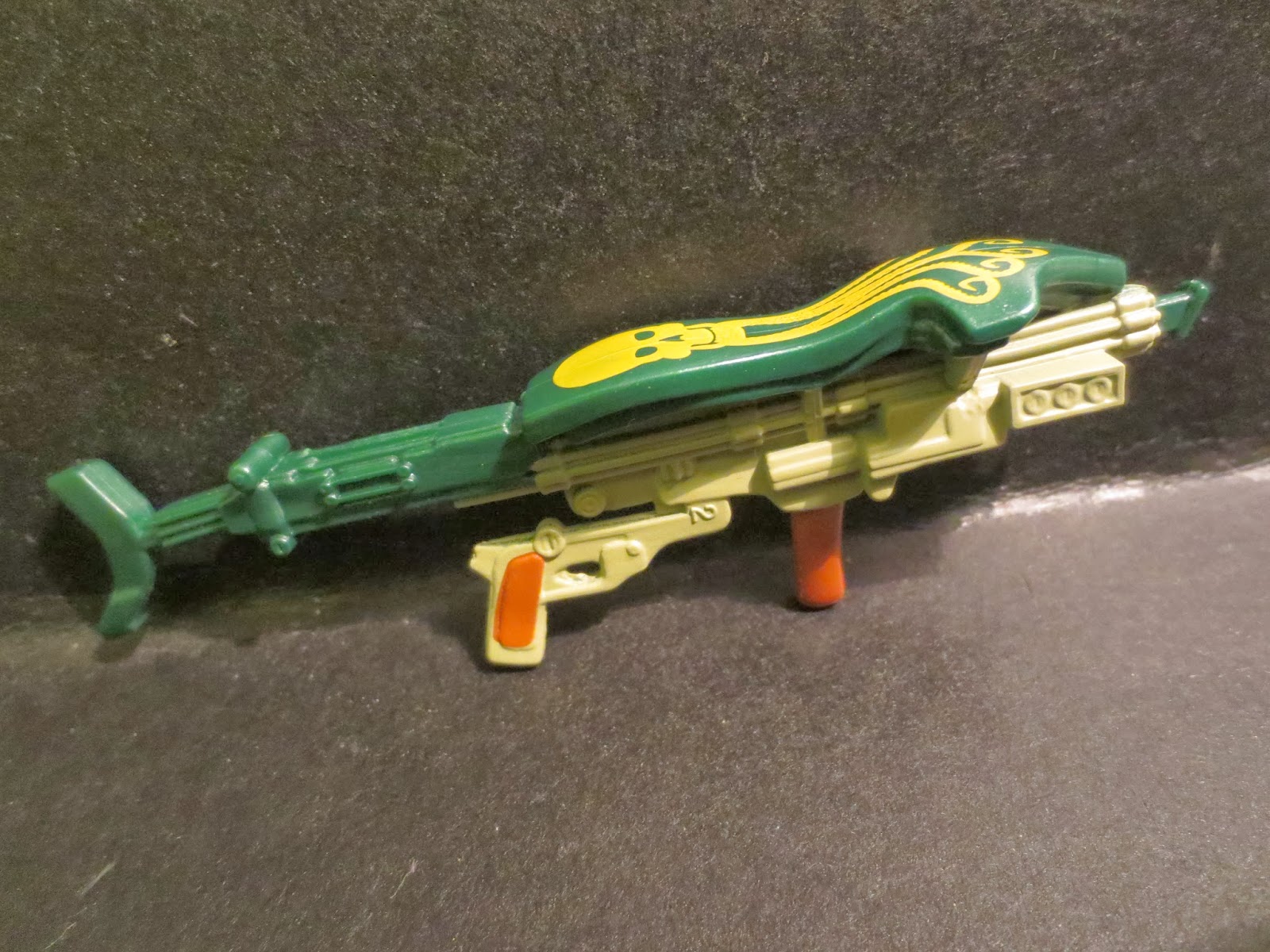 Secondly, we get some bizarre rifle that looks like an advanced miniature Gatling gun built upon a World War 2 era pistol base. This one is a little bit soft and rubbery (well, the pistol grip part anyway) but has a cool Hydra logo painted across the top. 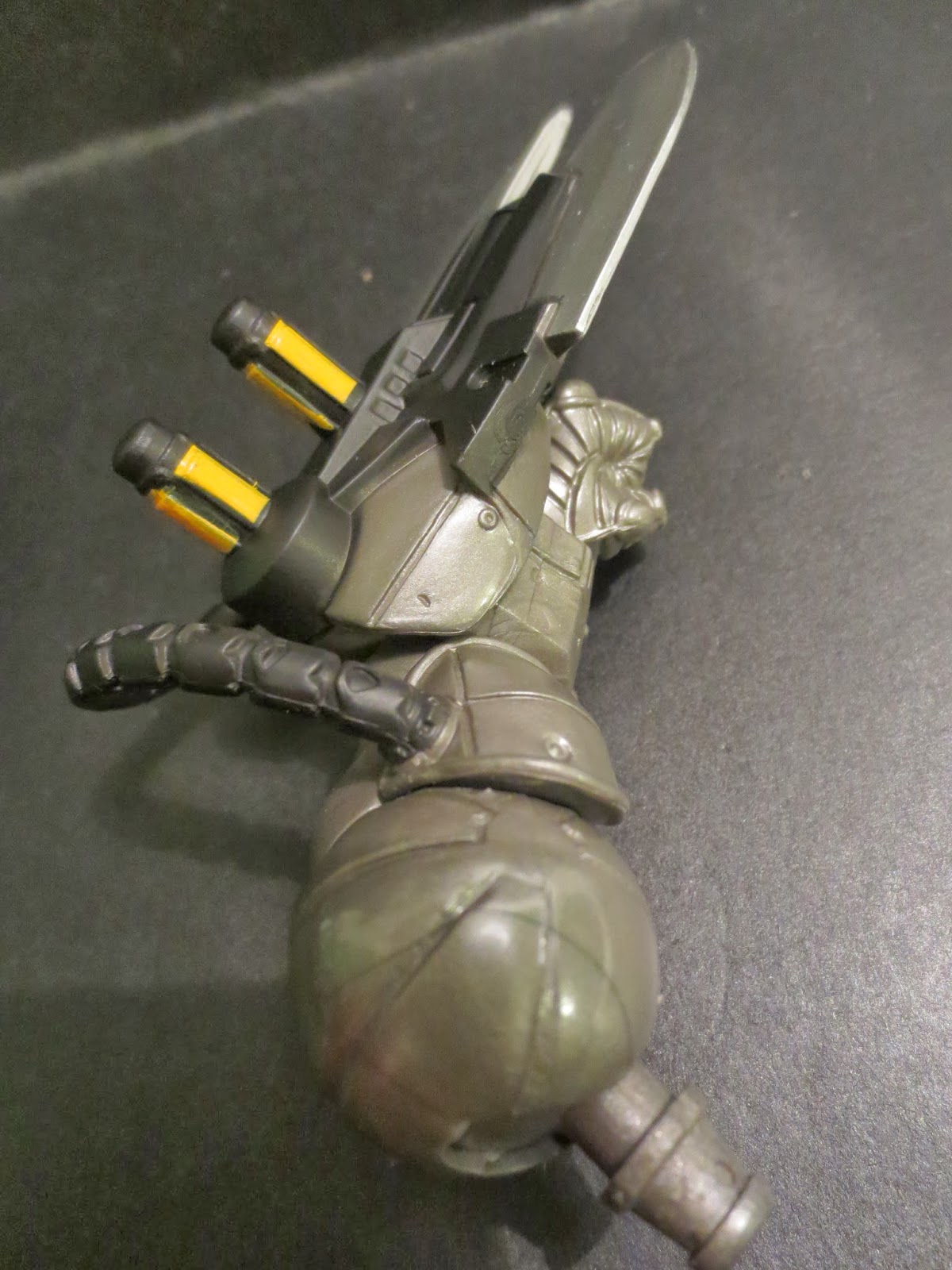 Oh, and of course you get the same Mandroid Build-A-Figure piece that came with the Red Skull. You know, because this guy is a variant of the Red Skull and not a completely unique figure or anything (even though he totally is). 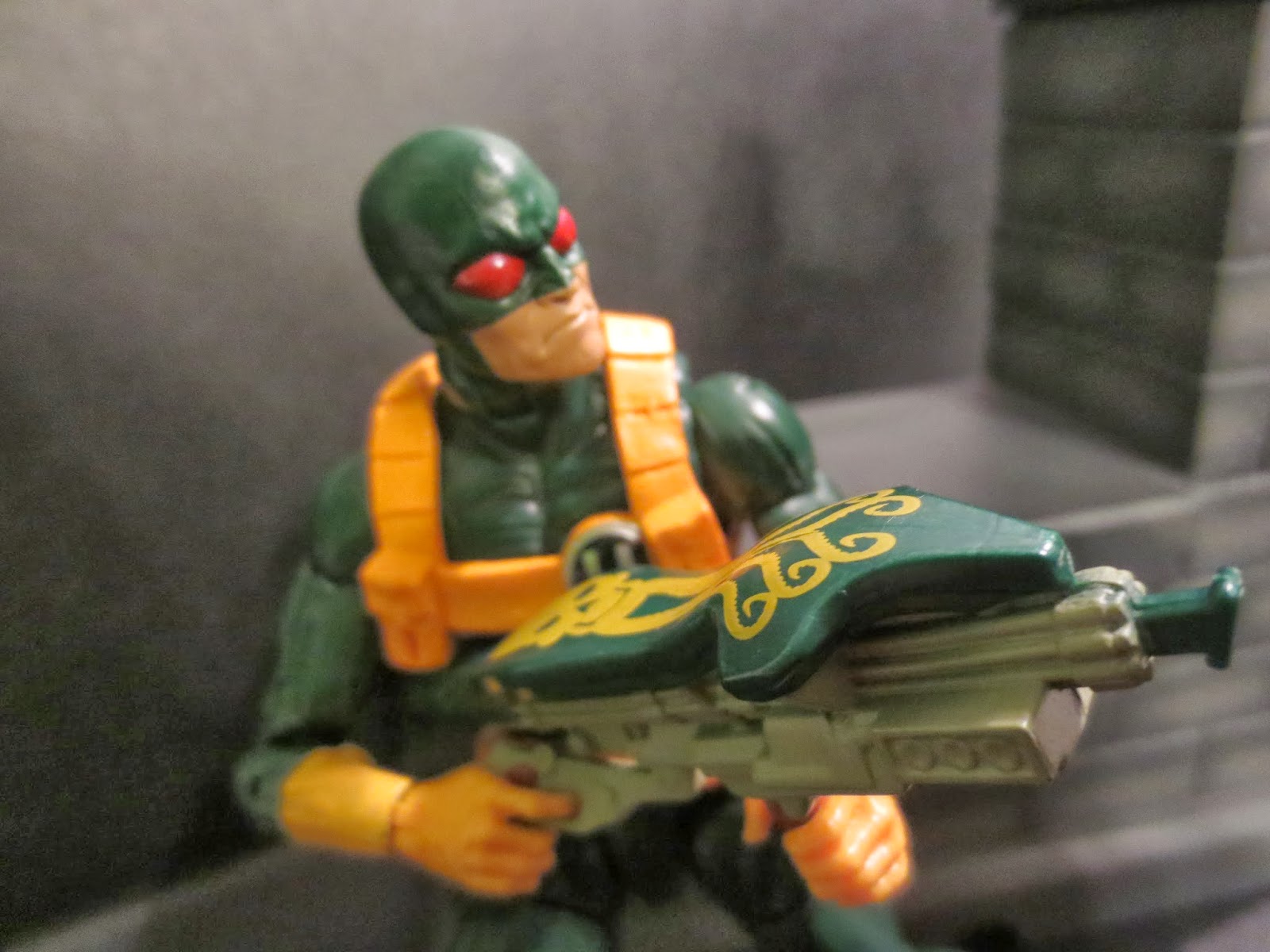 I'm pretty happy with this guy and I'm sure Marvel Legends collectors wanting to amass an army of Hydra Agents will be happy that these guys are back on the market. Yeah, they're $20 a pop, but that's probably cheaper than tracking the older guys down these days. Overall, I like the articulation on this figure a lot better than on many previous Marvel Legends figures and, of course, his weapons are awesome. Yeah, the body is a bit dull, but that happens with reuse. Overall, I'm giving the Hydra agent a Great. He really is a very decent, very fun figure with some of the coolest weaponry I've seen in quite some time.

If you're trying to track down a Hydra Agent, the only option Big Bad Toy Store has right now is snagging the first six figures in the series. Check it out if you're going all in on this line!