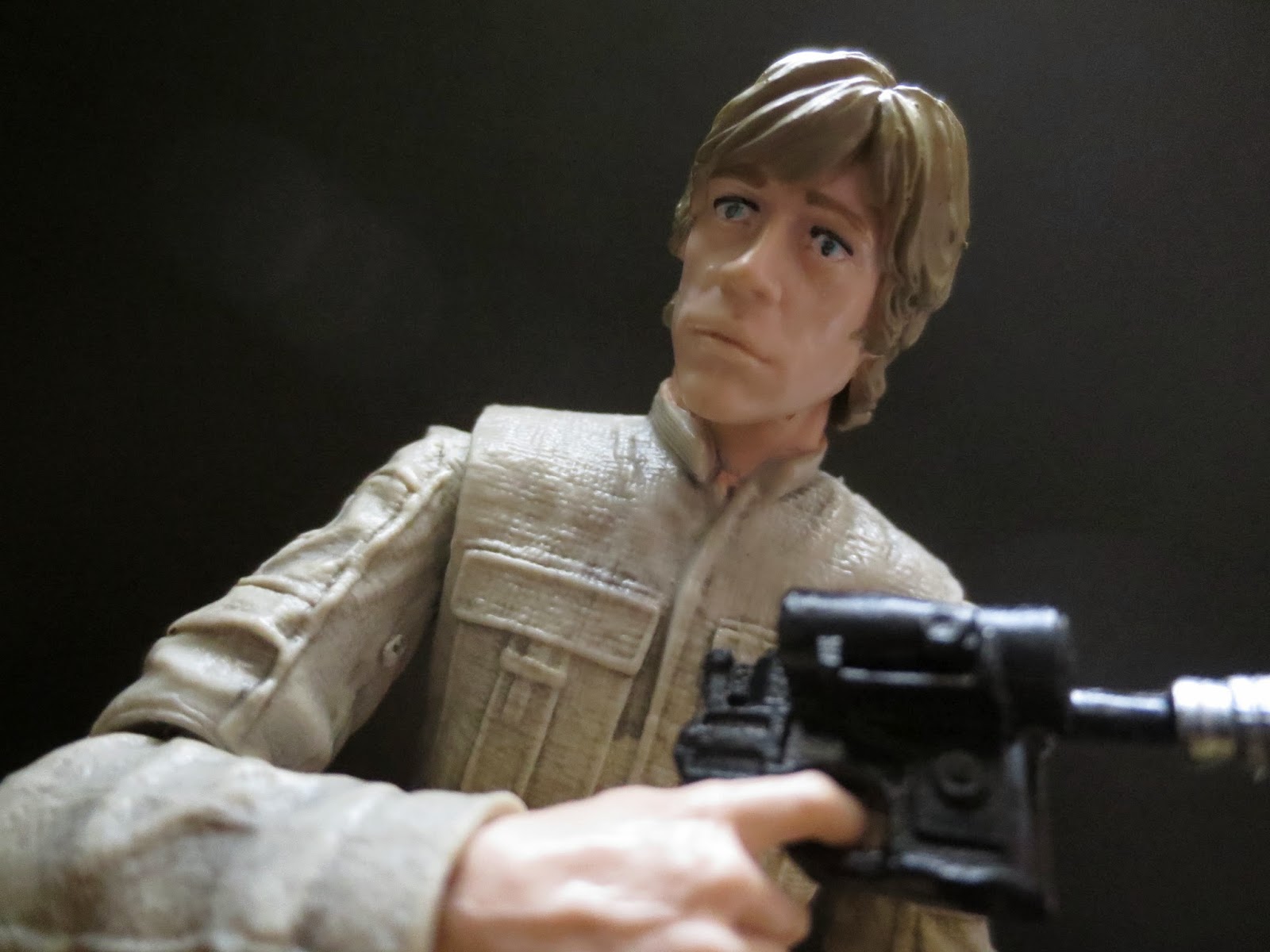 I think Luke Skywalker's Bespin outfit is my favorite look for him in the entire trilogy. Maybe it's because The Empire Strikes Back is my favorite Star Wars film or because the Bespin duel is pretty much my favorite scene in the entire saga, but I've always gravitated towards this look. It's quite simple and clean and really reflects the lived in, worn look of the Original Trilogy. It's interesting, too, that it kind of serves as a visual bridge between Luke's farm boy outfit in A New Hope and Obi-Wan Kenobi's Jedi robes. It's still simple and plain like Luke's farm boy outfit, but it also loses the white color and moves more towards the tan scheme of Obi-Wan. If watching the films in the original order, one might see a reflection of Obi-Wan and Yoda's color schemes in Luke's attire. It also stands out as being much more utilitarian, earthy than the clean, "modern" appearance of Bespin. Anyways, I love this look and it was definitely one of the Star Wars Black figures I was most looking towards. How did this figure turn out? Find out after the break... 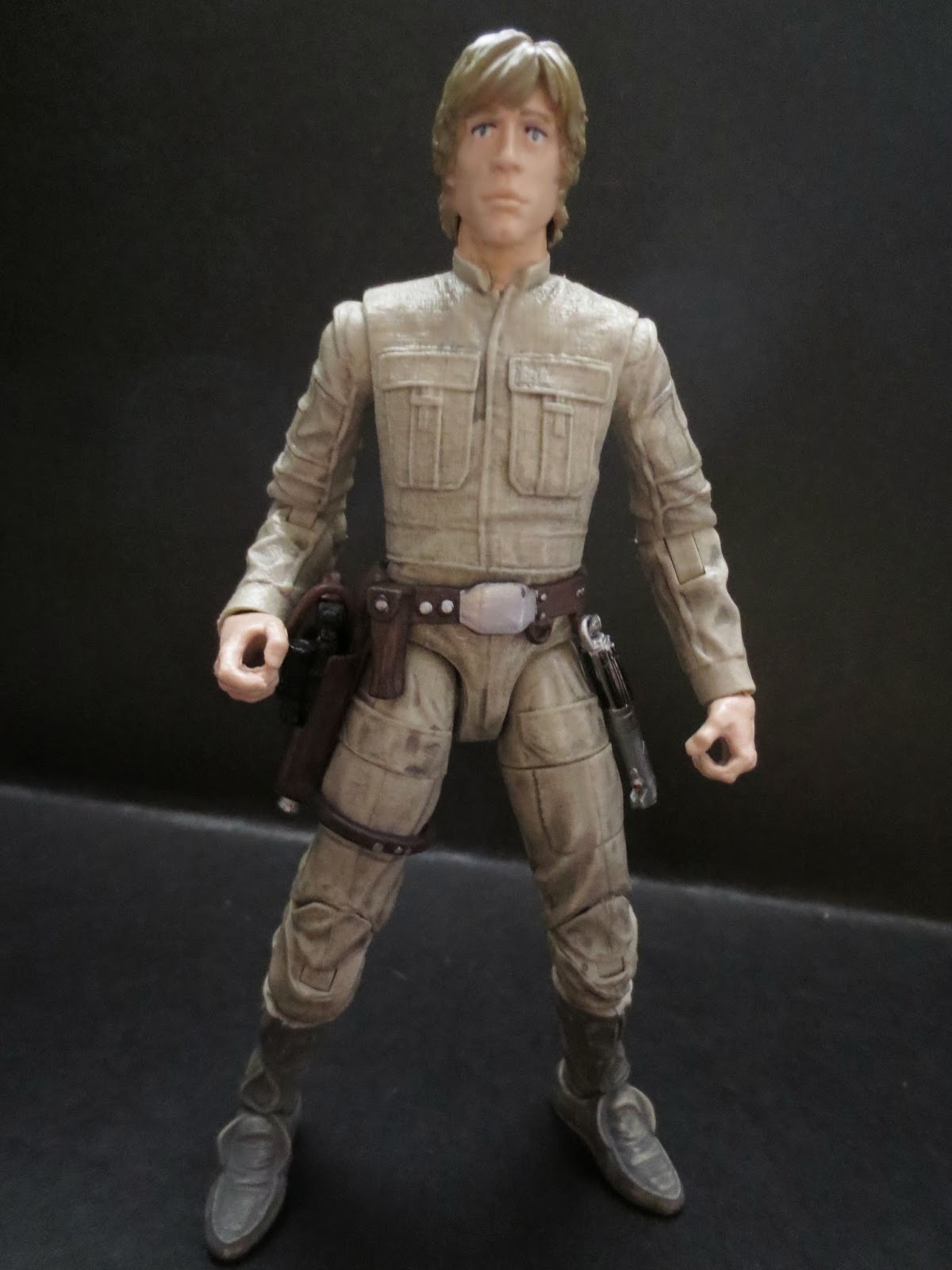 Luke measures in right around 5 5/8th inches which seems perfectly in scale for this 6 inch scale line. I really do appreciate this line's attention to scale as, other than R2-D2, every figure has seemed perfectly in scale. Back when Slave Leia was released many collectors were arguing that she was too short but, with the aid of Google and a ruler, when I compared the actual heights of the main cast and compared them to the heights of their respective figures I was quite pleased to find how accurate the scale was in this line. I've commented that the human figures have a style that really does mimic what we've seen in the 1/18th line in the past few years. There is a high level of detail but not the level of realism that we've come to expect with companies like NECA or Hot Toys. Honestly, though, with the mixture of aliens, droids, and potentially expanded universe characters, this was probably the way to go. While not every likeness has been consistently good (more on that in a minute) the style has been consistent. 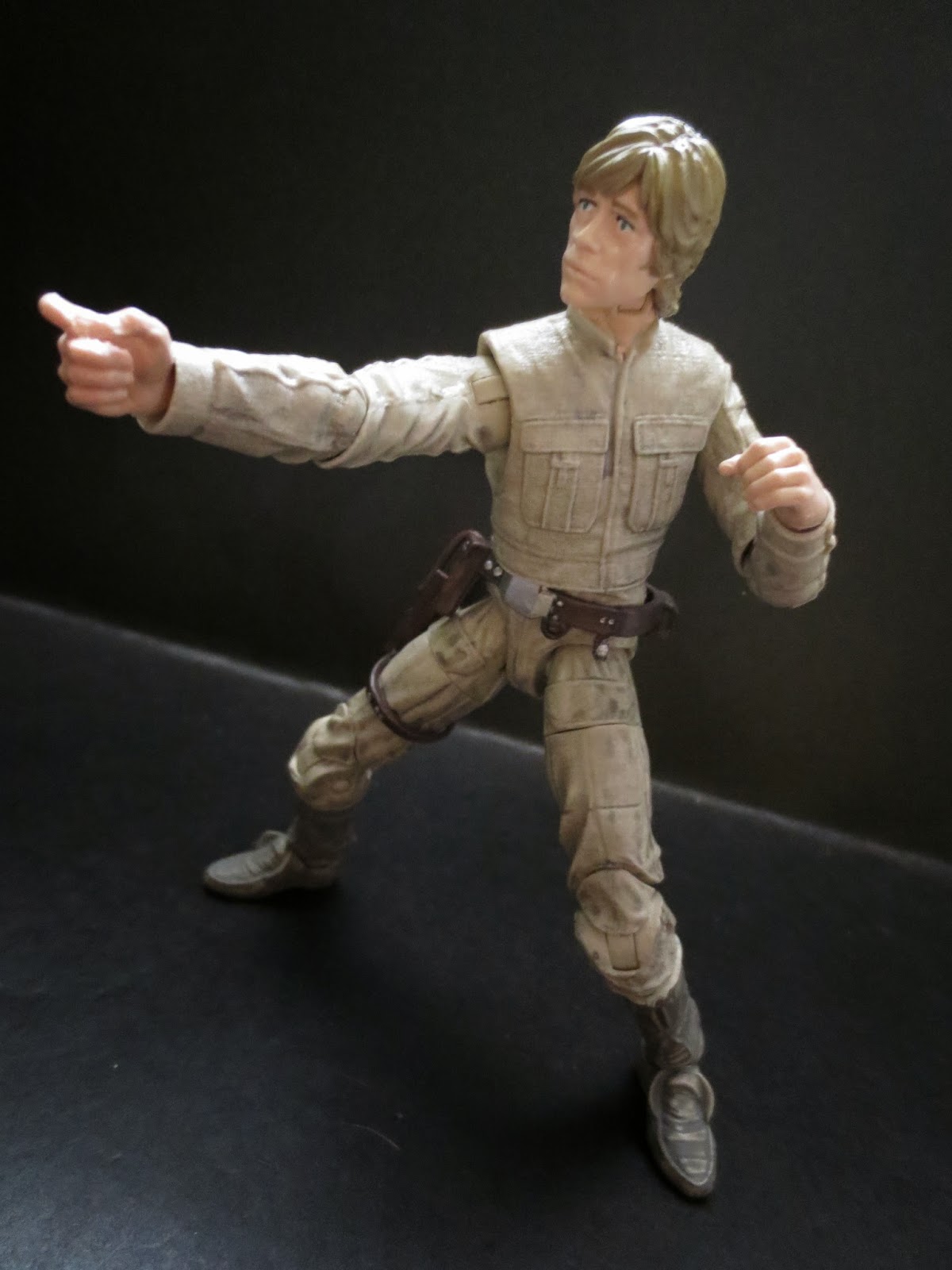 The articulation on Star Wars Black has typically been one of the line's strengths and Luke here really isn't an exception. These action figures feel solid and sturdy with no hints of breakage or weakness in the joints. Hasbro is the company whose toys I recall having the least amount of QC issues with in recent years and that level of quality carries over to these collector figures. Luke features the following points of articulation: swivel/hinge ankles, double hinge knees, swivel thighs, ball jointed hips, a ball jointed abdomen, swivel/hinge shoulders, swivel/hinge elbows, swivel/hinge wrists, hinged neck, and a ball jointed head. Other than Luke's non-removable belt limiting his right hip's movement, I'm pretty happy with the range of movement on the figure. He can even take some nice two-handed saber poses (which is a big improvement over his mentor, Obi-Wan). I think the biggest complaint I have is one I've had with a few of the figures: That stupid, visible hinge on his neck. I like the point of articulation but I hate how visible it is. It just really looks funky, particularly when Hasbro does so well at hiding the rest of the articulation. 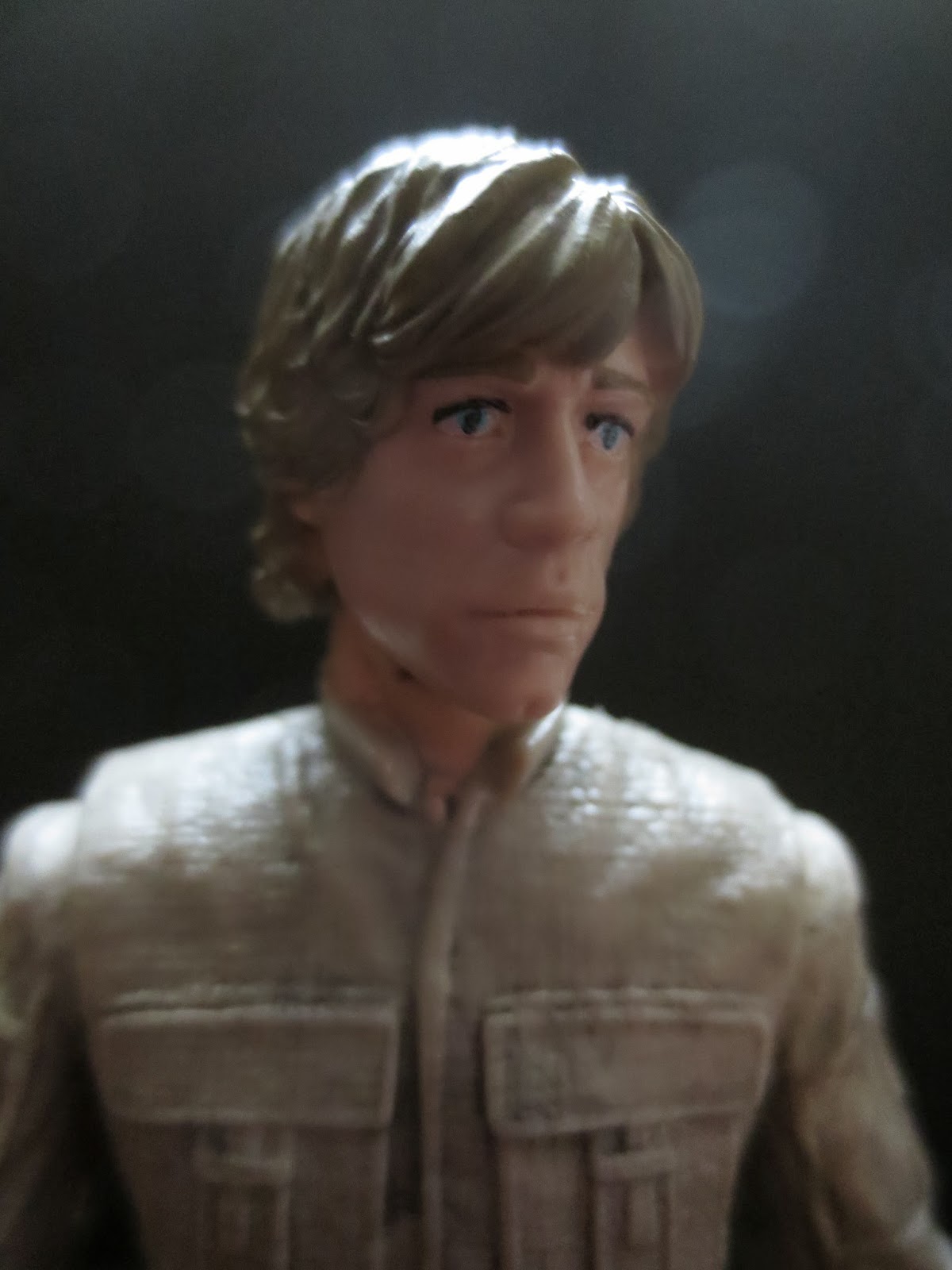 Mark Hamill does not have an easy face to capture. Rather than reusing the head sculpt from the series one Luke in his X-wing flightsuit, Hasbro attempted to create a new sculpt that more accurately reflected a slightly older Empire era Hamill. The result is passable, but not great. I really think the issue here is that Hasbro tried to put too much detail into Luke's face that it just looks too busy and awkward in this scale. I've seen pictures where the face looks much better (Matthew K's pics at The Fwoosh come to mind) so maybe seeing the figure larger actually helps the figure's appearance. The hair is great, though, and I do appreciate Hasbro trying to capture minor details like Luke's curls, his cleft chin, and the mole on his right cheek. I just think they made the face far too thin. To my eyes, he kind of resembles a young John Kerry, too. Better call in the Swoop Riders for Truth! 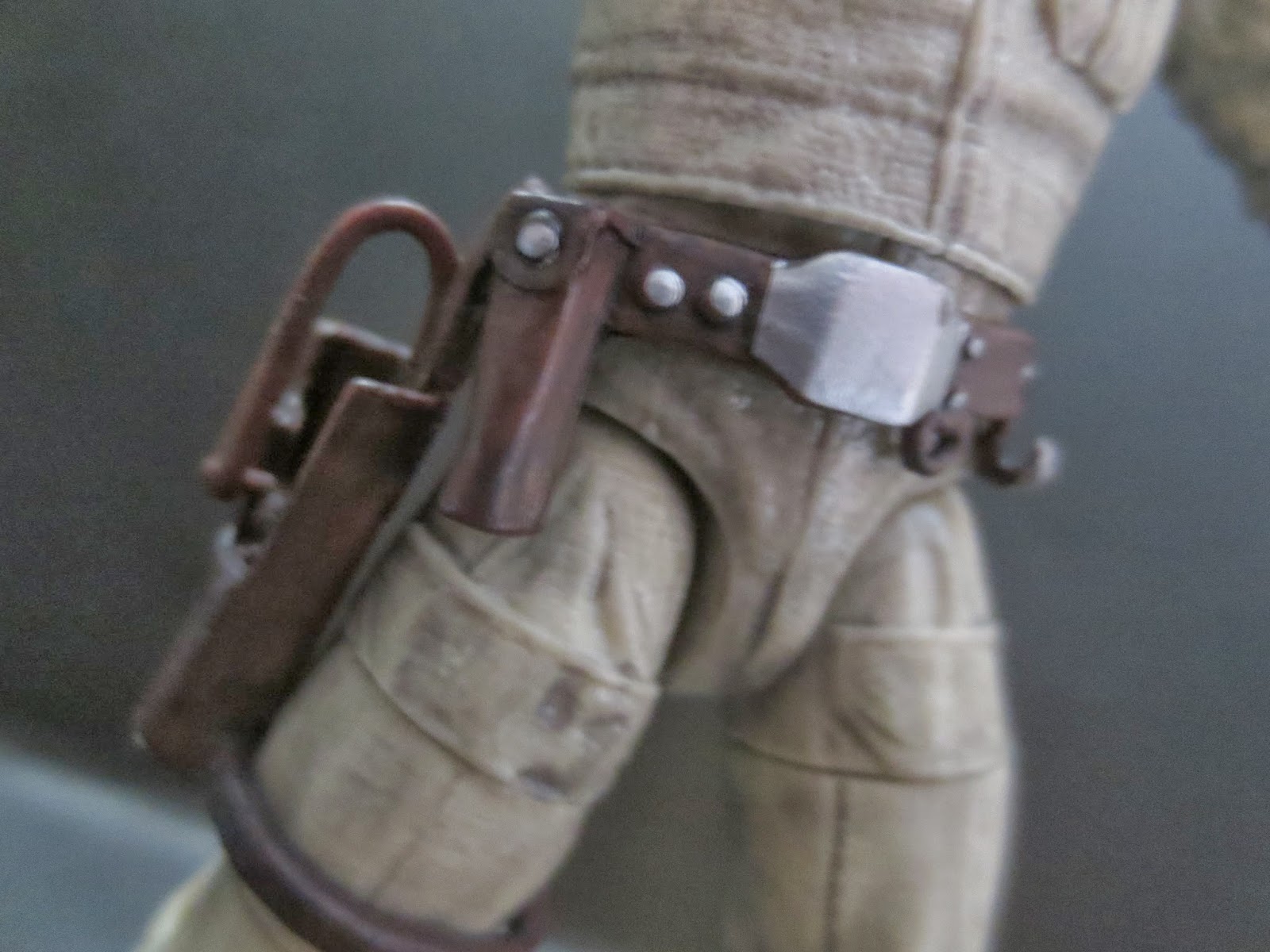 The rest of the sculpt is fantastic, though. As I mentioned above Luke's Bespin outfit was always one of my favorite looks for the character and I'm really happy with how faithfully Hasbro translated the costume into action figure form. It looks perfect and every fold, pocket, and seam looks to be perfectly in place. They really nailed Luke's funky boots that have the weird wings on the sides and the straps around them. The belt is a separate piece but isn't removable (unless you disassemble the figure) so it counts as part of the sculpt and not as an accessory. It looks great with only one fault; there should actually be two pouches on the right side next to the holster. The figure has the longer pouch but not the shorter one. It's a small mistake, but one that I noticed. What can I say? I pay attention to these things? Despite that minor flaw, I'm really happy with the sculpt. Even the articulation looks great on it, particularly how the ab-joint is covered by the bottom of the shirt. It looks very natural and flawless and actually adds to the sculpt. How often do you hear of articulation adding to the sculpt? 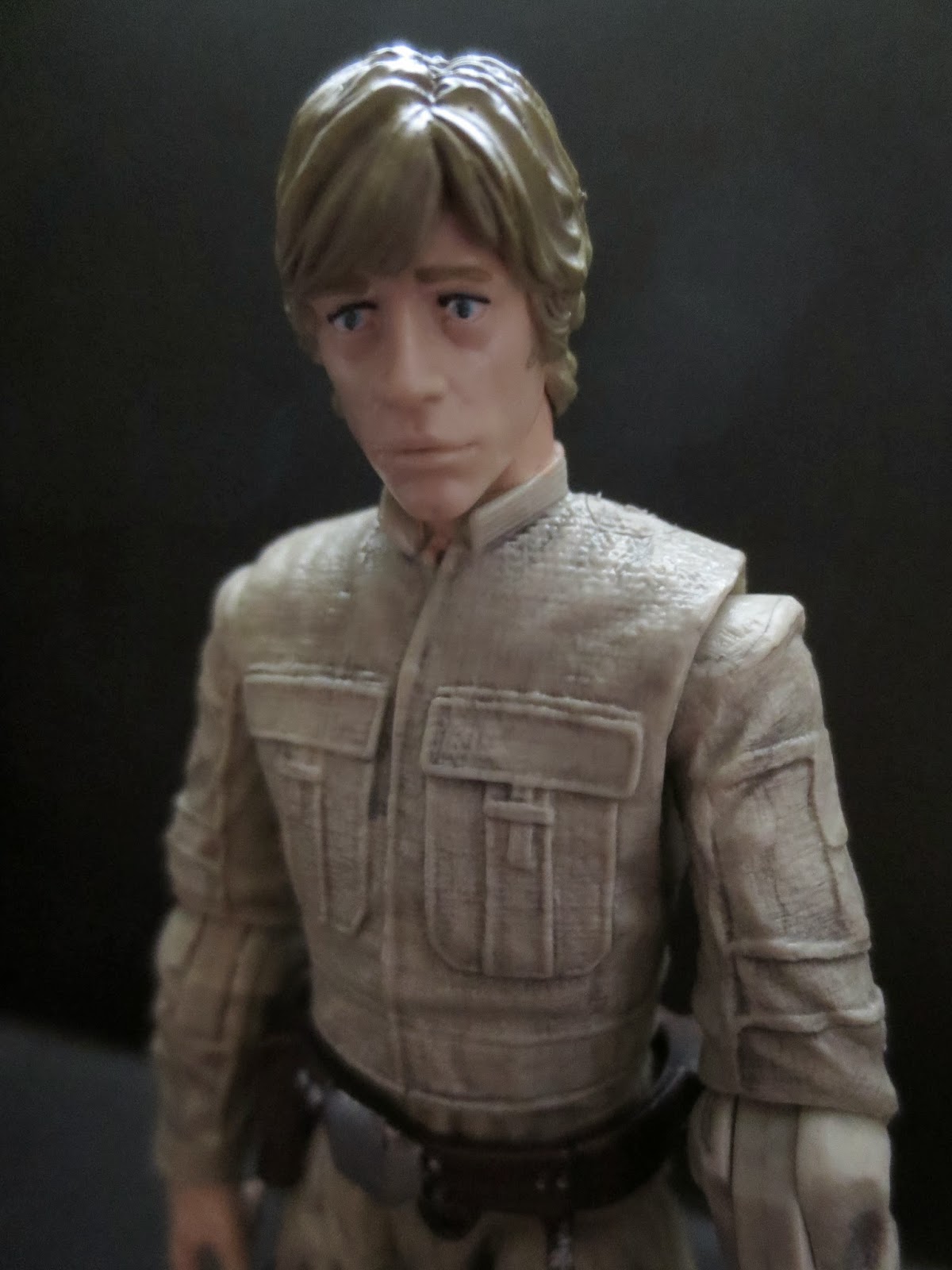 While Luke's outfit has the tan overload like Obi-Wan Kenobi, Hasbro really used some nice paint techniques to help it stand out. The whole suit has a nice wash that really makes it look more textured and weathered. Remember, while most fans call this outfit the Bespin Fatigues (based on the original Kenner designation), Luke also wore this outfit for months on Dagobah so the weathered look works. The belt also has two different shades of brown to help sell the leather look of it. The little silver buttons and buckles are pretty neat and clean, although this sample has a small brown scratch on the belt buckle. There's also some weird flaking of the flesh colored paint around his neckline that looks kind of weird. Maybe he needs to moisturize or something. 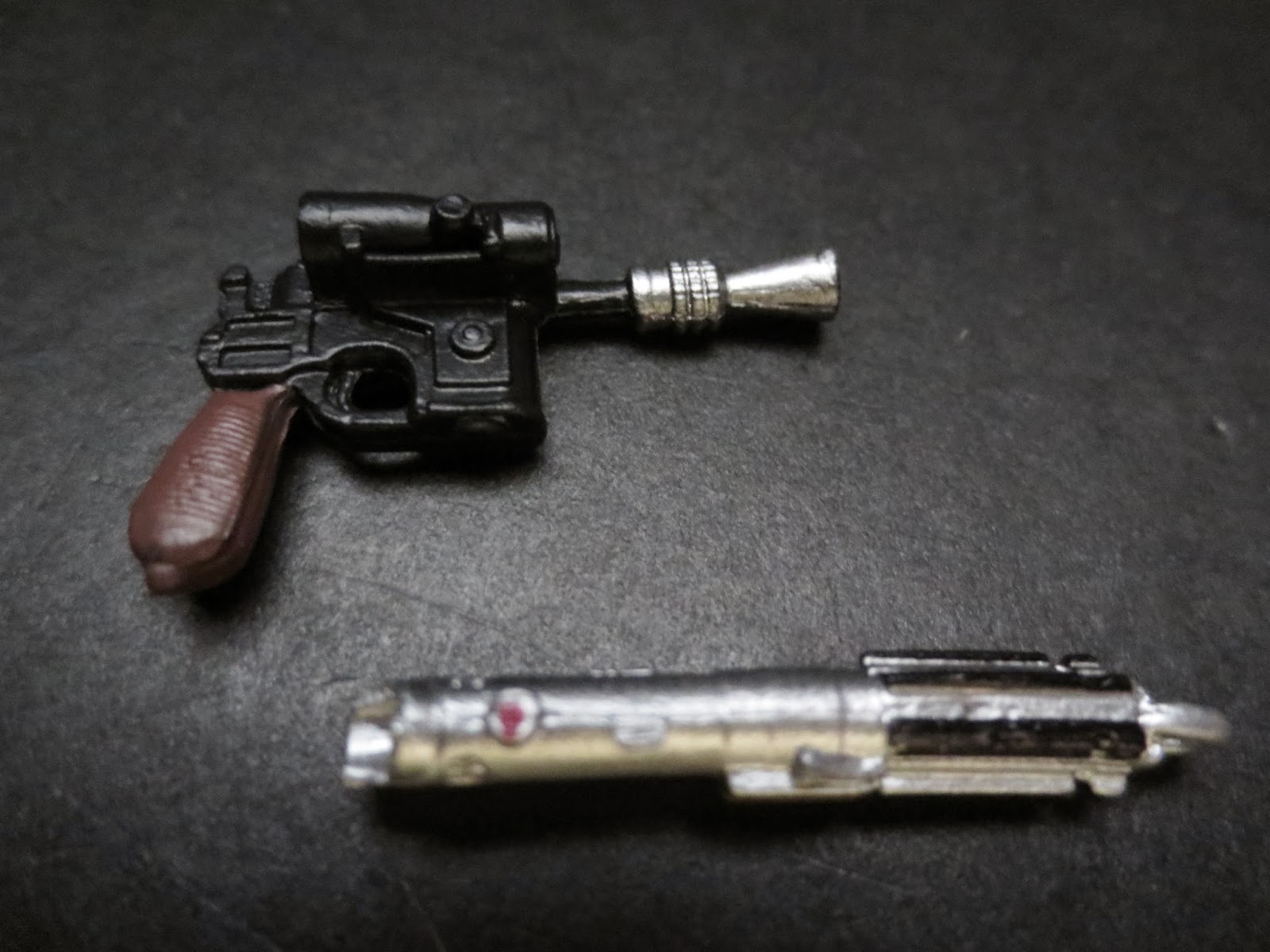 If you don't want to hear me rant and rave then skip to the next paragraph: Like with Obi-Wan Kenobi, I'm actually quite disappointed with the accessories that Hasbro did not include with this figure. Series one and two featured some great accessories and typically came with everything you could hope the character would come with such as additional portraits, extra belts, swappable hands, and other little features that really bumped these figures up to a new level. What does this figure come with? His blaster and his lightsaber. 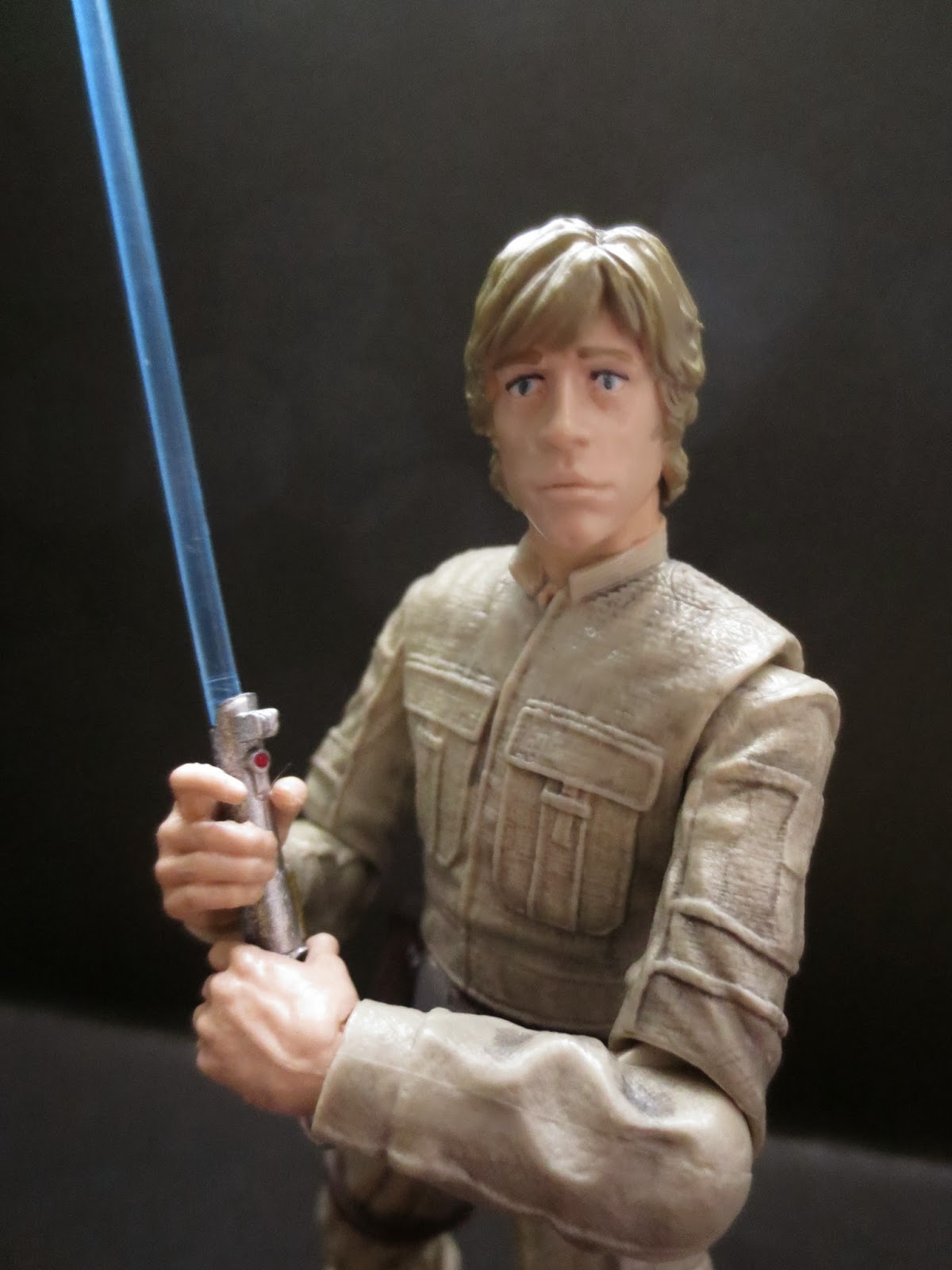 Those are perfectly logical accessories and while the blaster is reused from X-wing pilot Luke (albeit with a slightly different paint job) the lightsaber is actually a different sculpt to reflect the modified ESB lightsaber with a paler blue removable blade. So those are both great, but what about making Luke's right hand removable? Nope. Han Solo's hands were removable, but not Luke's. You know, the guy famous for having his right hand removed. What about an alternate portrait with messed up hair, a beat-up face, and a distressed expression? What about his cool space cast? I feel like with the addition of just a removable hand and an alternate head, Hasbro could have knocked this figure out of the park. Instead, this feels more like they're just bunting after some stunning series one and two figures. 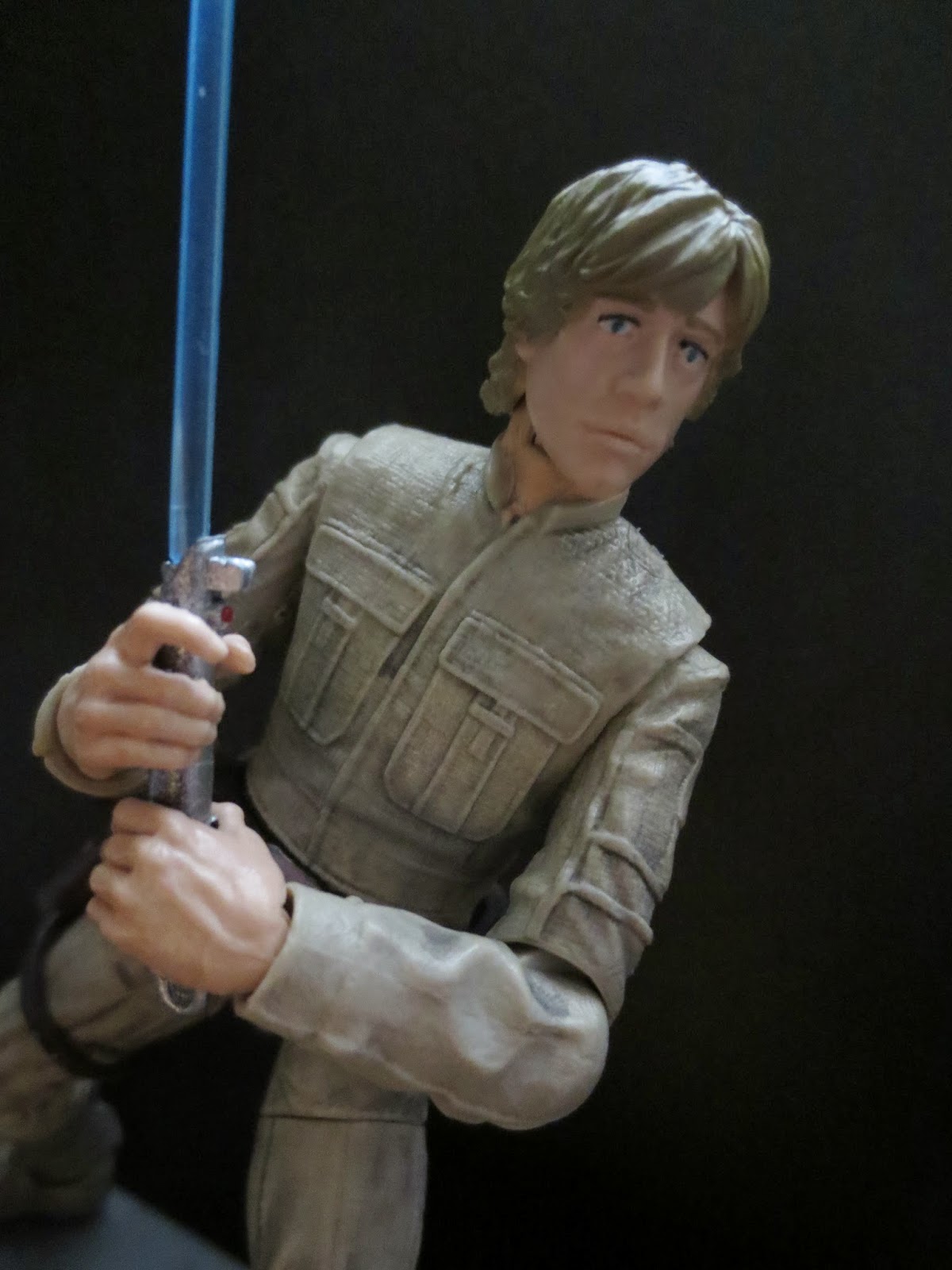 I do like this figure, but I guess I might possibly have incorrectly perceived what Star Wars Black is supposed to be about. While I have multiple scene specific versions of the main Star Wars crew in the 1/18th scale, that's not what I thought would happen with this line. I'm afraid, though, that Luke not including these accessories is a sign that Hasbro's planning on coming back to double dip here by offering us a Luke with battle damaged head and a missing hand further down the line. Frankly, if that's the case I'm just going to return to picking up the 1/18th figures. Luke is a nice figure, but he could have been so much more. Great articulation, body sculpt, paint and accessories but a below average head sculpt and some real missed opportunities for extras make this a Good and a 1/2 figure. If you're a completest or a huge fan of this look it's worth picking up, but it is by no means representative of what this line is capable of overall. This is probably my biggest disappointment in the entire line up to this point. 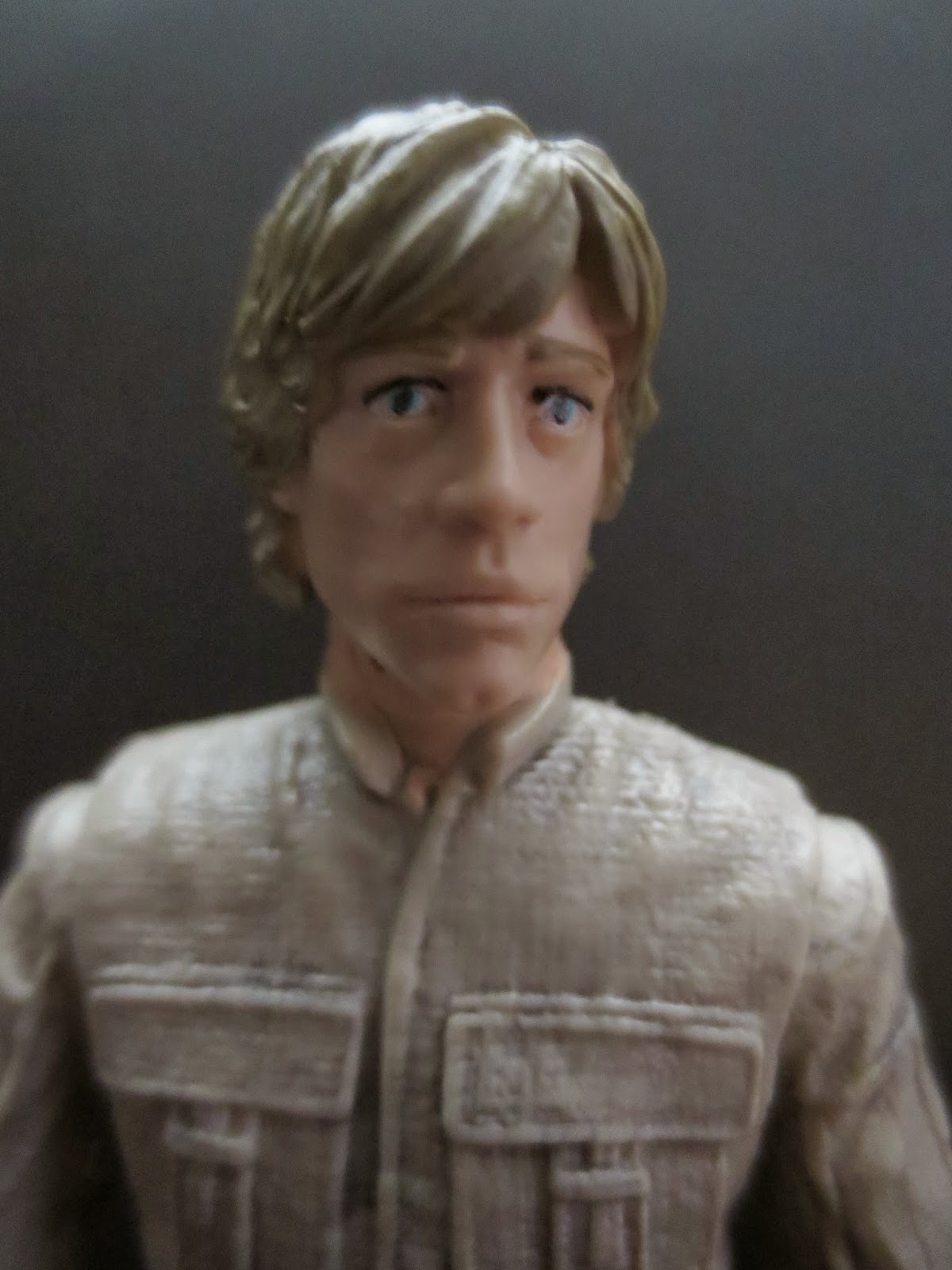 If you're interested in a Luke of your own, right now you can only order him from Big Bad Toy Store in a set of three or four figures from series three. Also, make sure to check out out other reviews of Star Wars Black figures: