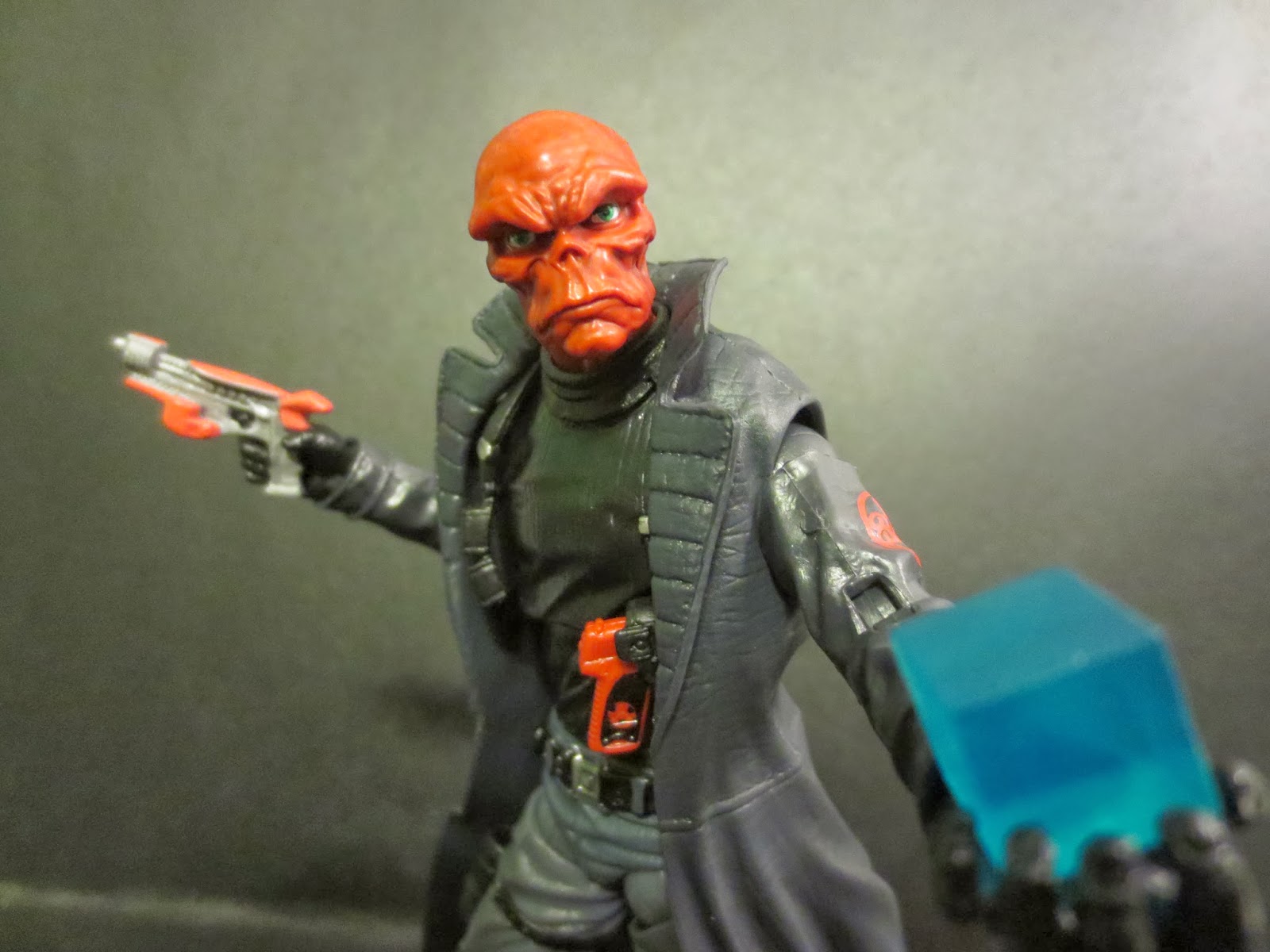 I really don't understand Hasbro's rationale for releasing two separate figures as variants. If there were two Hydra Agents or two different Red Skulls, that would make sense as a variant. Hasbro, however, has been releasing two separate characters under one title. As far as I can tell, this craziness started back in series 2 of Hasbro's "Return of Marvel Legends" line where separate characters like Piledriver and Thunderball were both released under the title "Wrecking Crew." Later, characters like Blade and the Punisher were both released as Marvel Knights (with Blade never actually getting released as far as I can tell). Anyways, at least in this Captain America: The Winter Soldier series it seems like we're actually getting both variants. Under the title of Agents of Hydra, Hasbro has released both a Hydra Agent and the Red Skull. Today I'm looking at the Red Skull, aka the Crimson Calavera. Join me after the break... 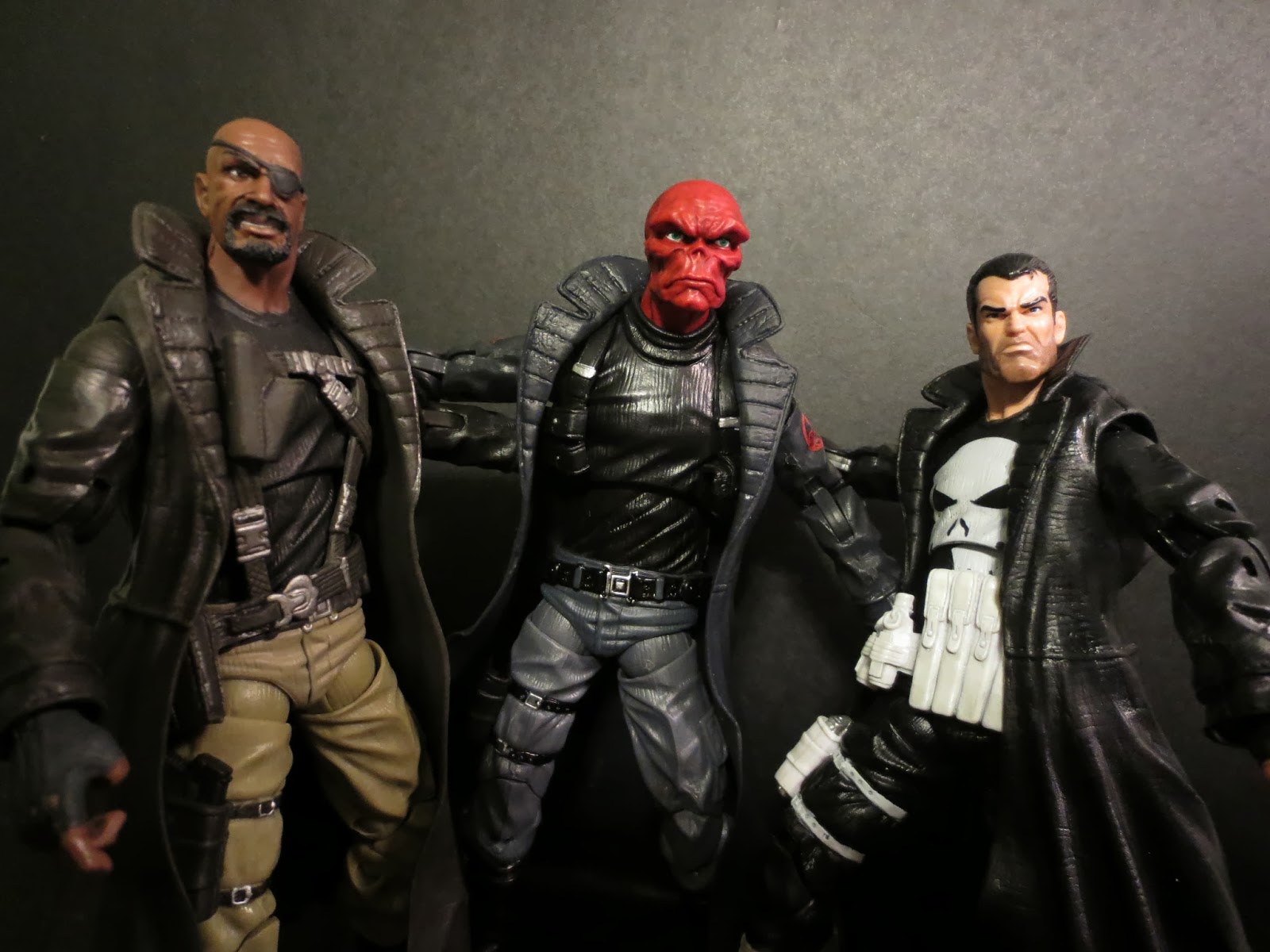 This version of Johann Schmidt is right around 6 1/2 inches tall and is based on his comic book appearances rather than his film appearance in Captain America: The First Avenger. Like many other Marvel Legends, Red Skull reuses body parts from previous figures. Most of the figure (definitely the body, waist, thighs, trench coat, and arms) is reused from the Ultimate Nick Fury figure that came in a two-pack with Ultimate Captain America near the end of Hasbro's first Marvel Legends line. The pieces work, though, so you really can't argue with the choice. While I rarely speak about packaging, I do like how these guys come in boxes, similar to Star Wars Black. The packaging is very collector friendly, takes up less space than a traditional blister card, and just looks great on the shelves. 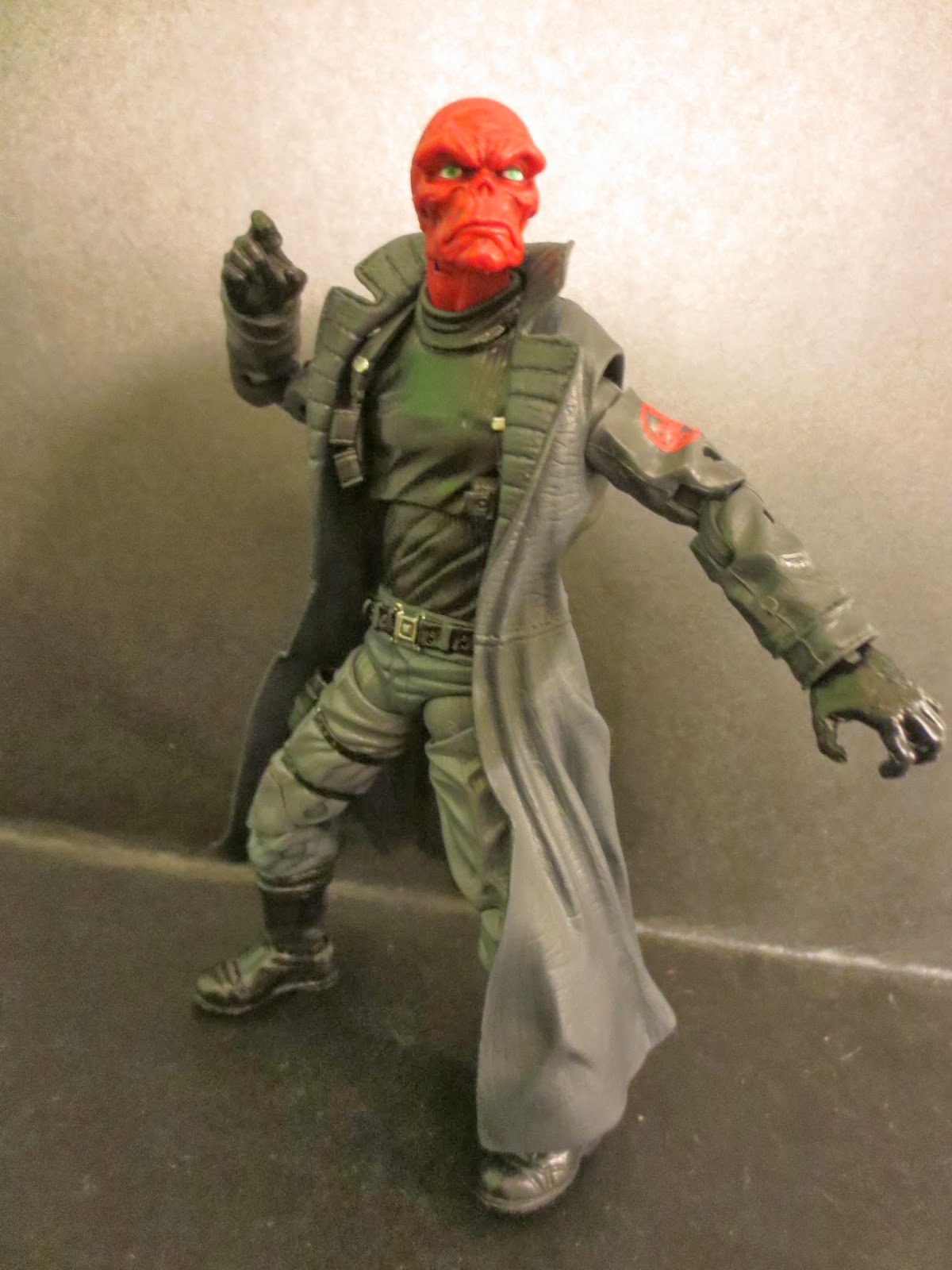 The Red Skull features the following points of articulation: swivel/ hinge ankles, double hinged knees, swivel thighs, swivel/hinge hips, a ball jointed torso, swivel/hinge shoulders, swivel biceps, double hinged elbows, swivel hinge/ wrists, a hinged neck, and a ball jointed head. That's a really nice amount of articulation and while I don't really like the hips on Hasbro's Marvel Legends figures, I'd be pretty pleased with this guy. There is great head motion, great hand motion, and great knee and elbow motion. Unfortunately, the plastic that the figure's limbs are molded in is really soft and flexible and makes the guy tough to pose. Instead of getting the elbow or shoulder joints to move, you're more likely to have the elbows and biceps just bend. I know it's a delicate balance between having plastic too brittle that it snaps and too gummy that it tears, but this just didn't turn out well. He also has some terribly frustrating shoulders and hips. Just really, really awkward. Star Wars Black and most Hasbro Marvel Legends figures I've owned haven't had this problem, so I hope it isn't a major issue going forward. If you're just getting Red Skull in one pose and leaving him that way you should be fine, but for kids and collectors wanting to frequently re-position Johann, I think you'll be fairly frustrated. 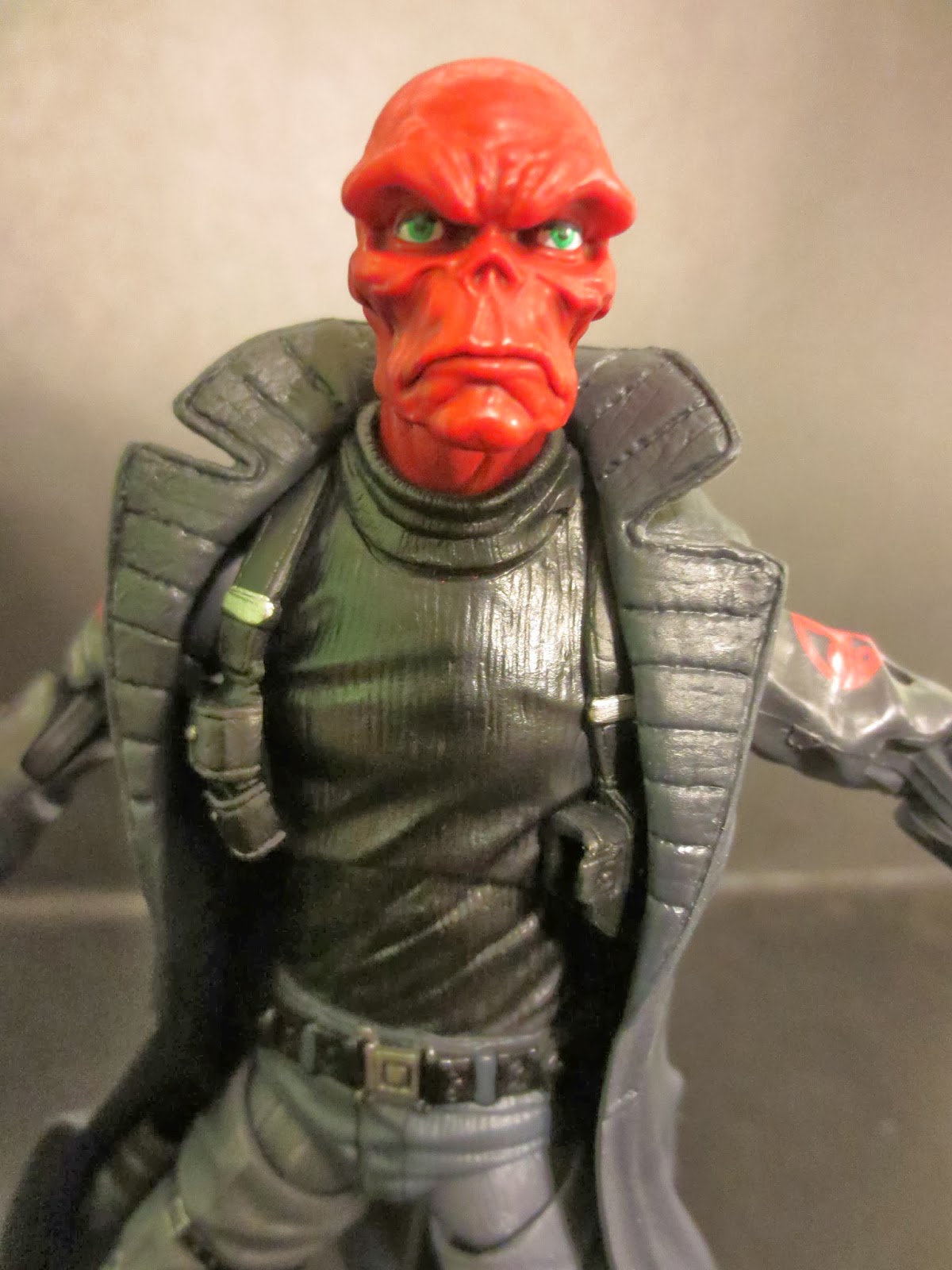 You can really see the Jack Kirby influence in this sculpt since he has that fantastic, heavy brow and wonderful grimace. It's a great detailed head sculpt that should make Marvel Legends fans happy. The body, while reused, really does work well. The ribbed commando sweater and pants worn under a sleek trench coat seem just as fitting for a super spy like Nick Fury or a vigilante like the Punisher as they do for a modern day member of Hydra. His boots and gloves are different from those guys, however, with a sleeker, more leathery texture. He's also wearing plenty of extra bits of gear such as a small holster on his right thigh and a shoulder holster under his left arm (with extra magazine pouches under his right). 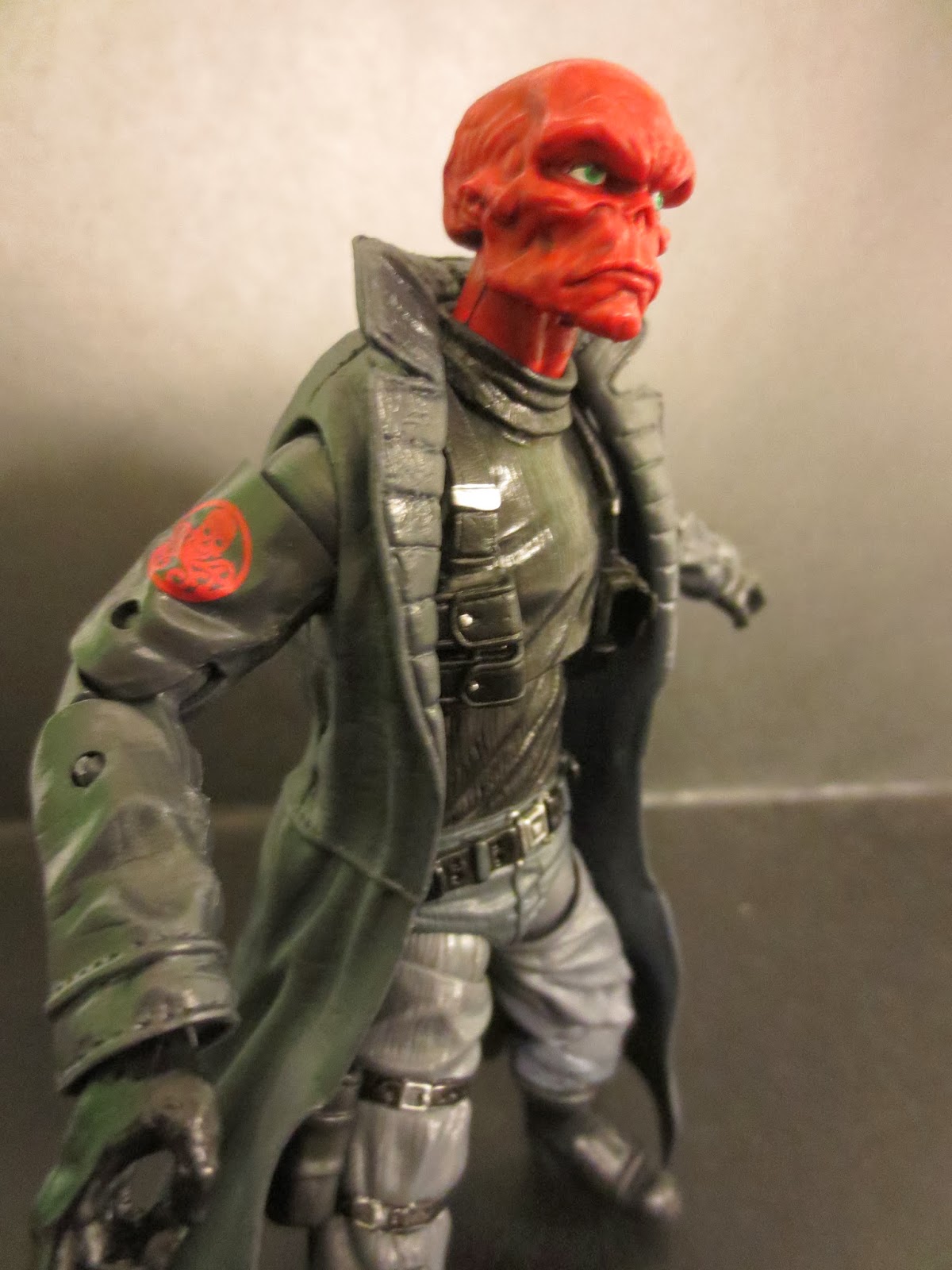 The paint work is quite good. There's nothing too complex but I do like the glossy finish on Red Skull's boots and gloves. His jacket isn't as glossy, strangely enough, and is actually a bit more gray than black. The headsculpt has excellent paint with a really nice wash on the head and some excellent work on the eyes. Smaller details like the Hydra logos on the shoulders and the various belts and buckles all look good and are quite neat and clean. The only problem I've seen is some minor spots on the lower legs where the black paint the legs are molded in is showing through the gray paint. 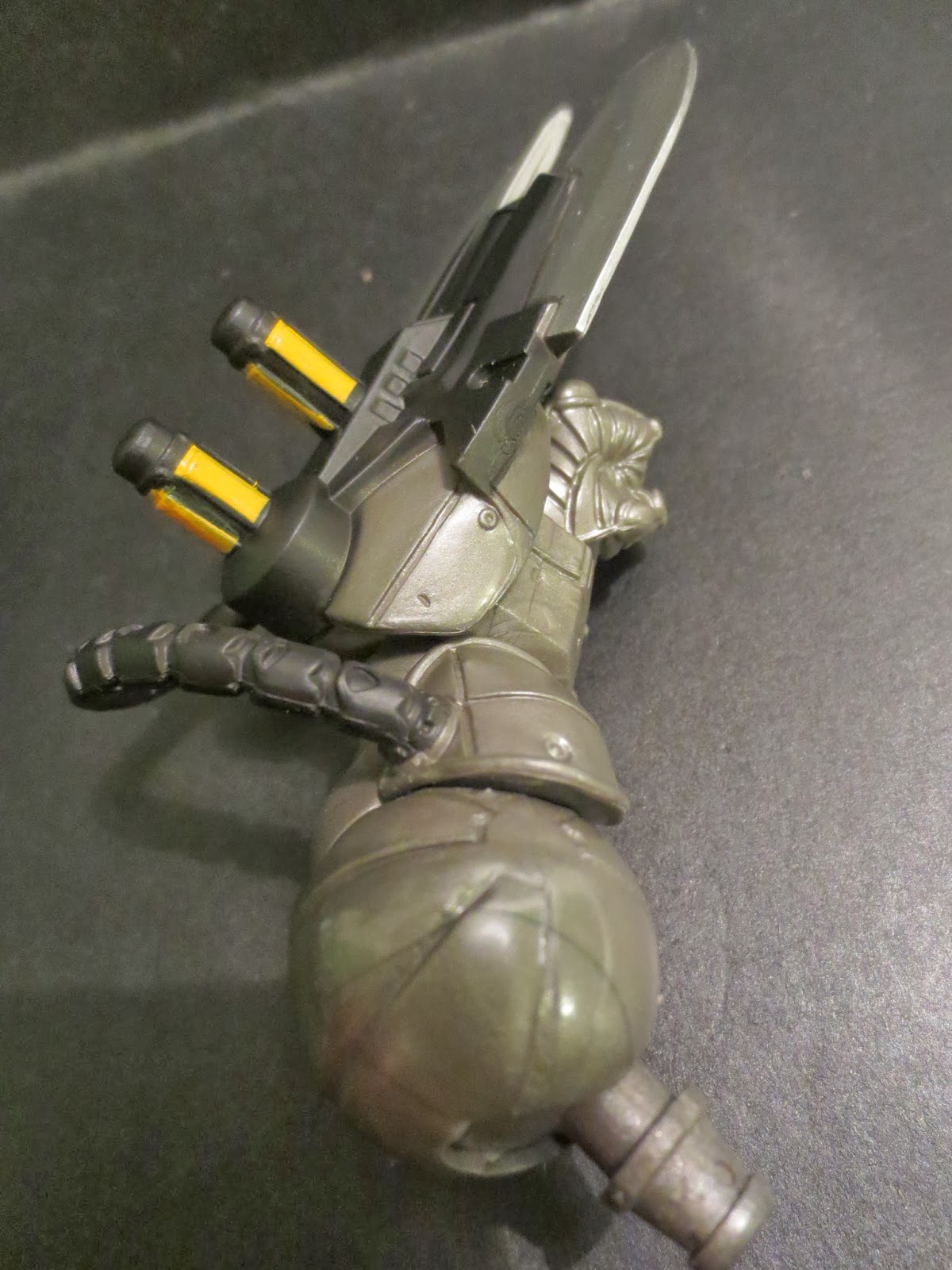 Red Skull does come with quite a few accessories. While he'll look odd without it (the sleeves are sculpted onto his arms), his jacket is removable (that also lets you remove his shoulder holster). He also comes with a piece of the series' Build-A-Figure, Mandroid. The Mandroid armor first appeared in Avengers #94 way back in 1971 and were built by Tony Stark to assist SHIELD operatives in dealing with super-criminals. This looks like a really cool Build-A-Figure, so we'll see if I can eventually cobble together the parts to build it. 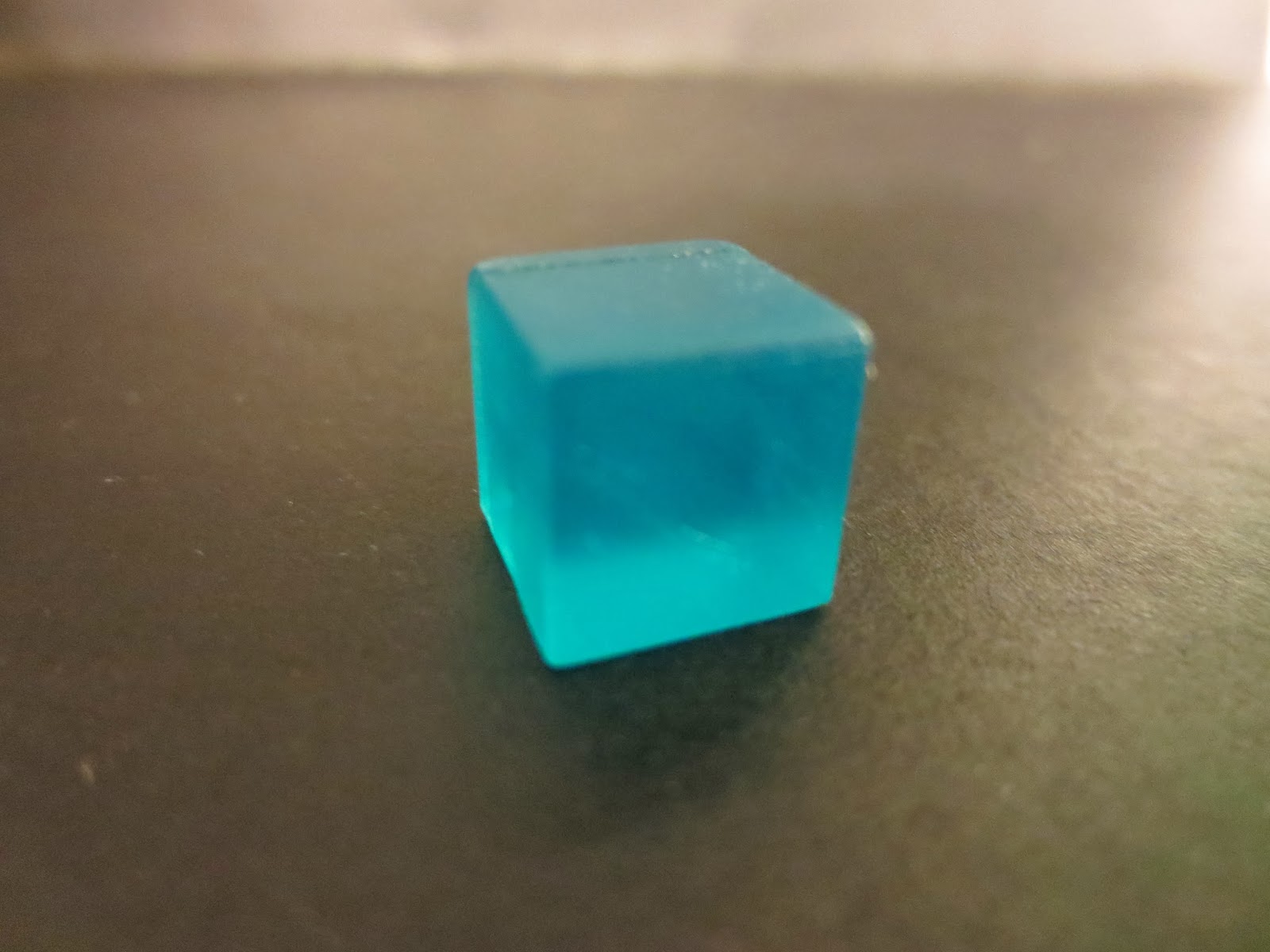 As far as actual accessories that he can use to fight Cap, Red Skull comes with a Cosmic Cube (AKA the Tessaract), a standard pistol with the Hydra logo on the handle, and a more exotic pistol. While the Cosmic Cube is a simple translucent blue cube, it looks cool and fits great in the figure's left hand. 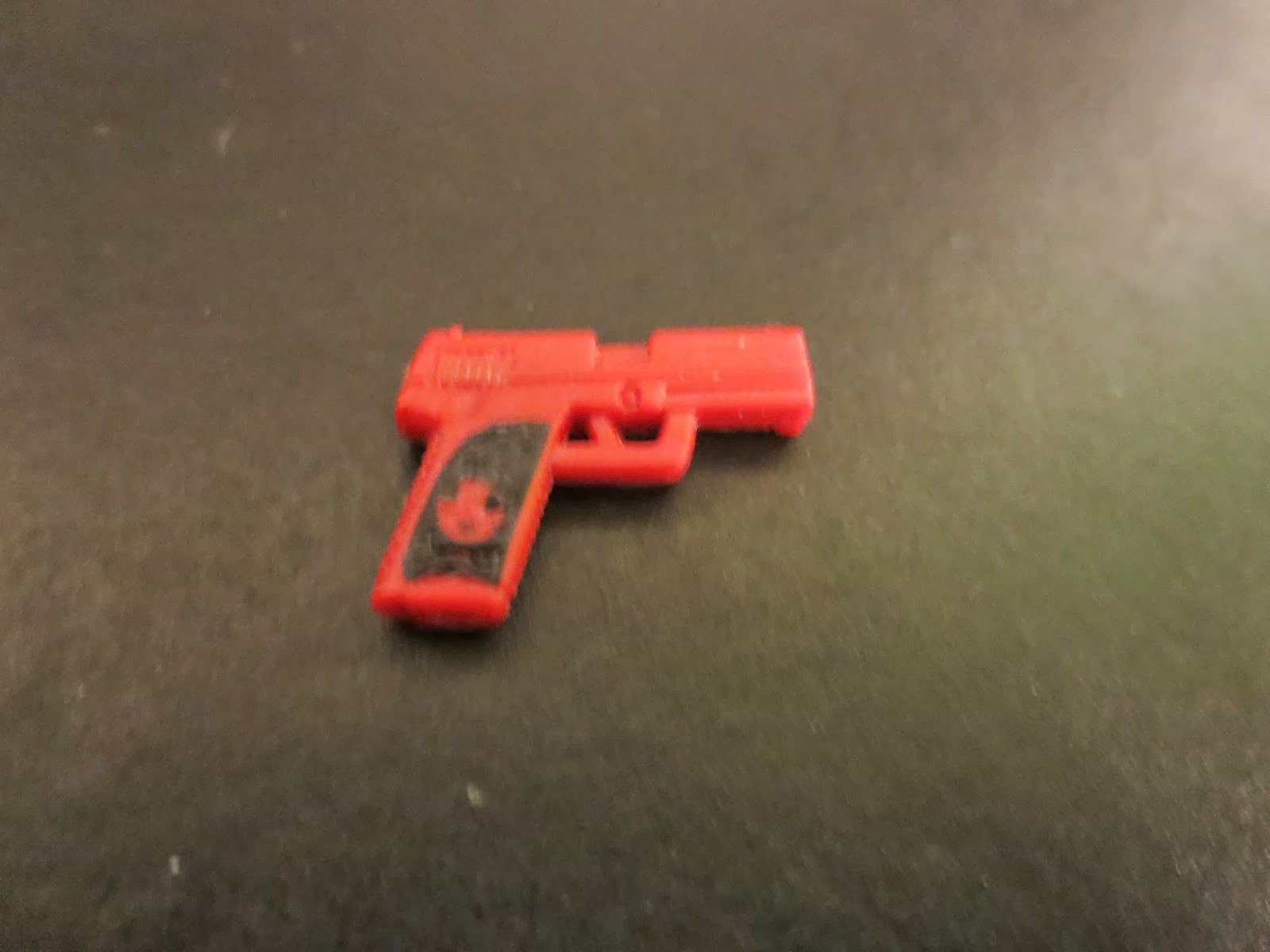 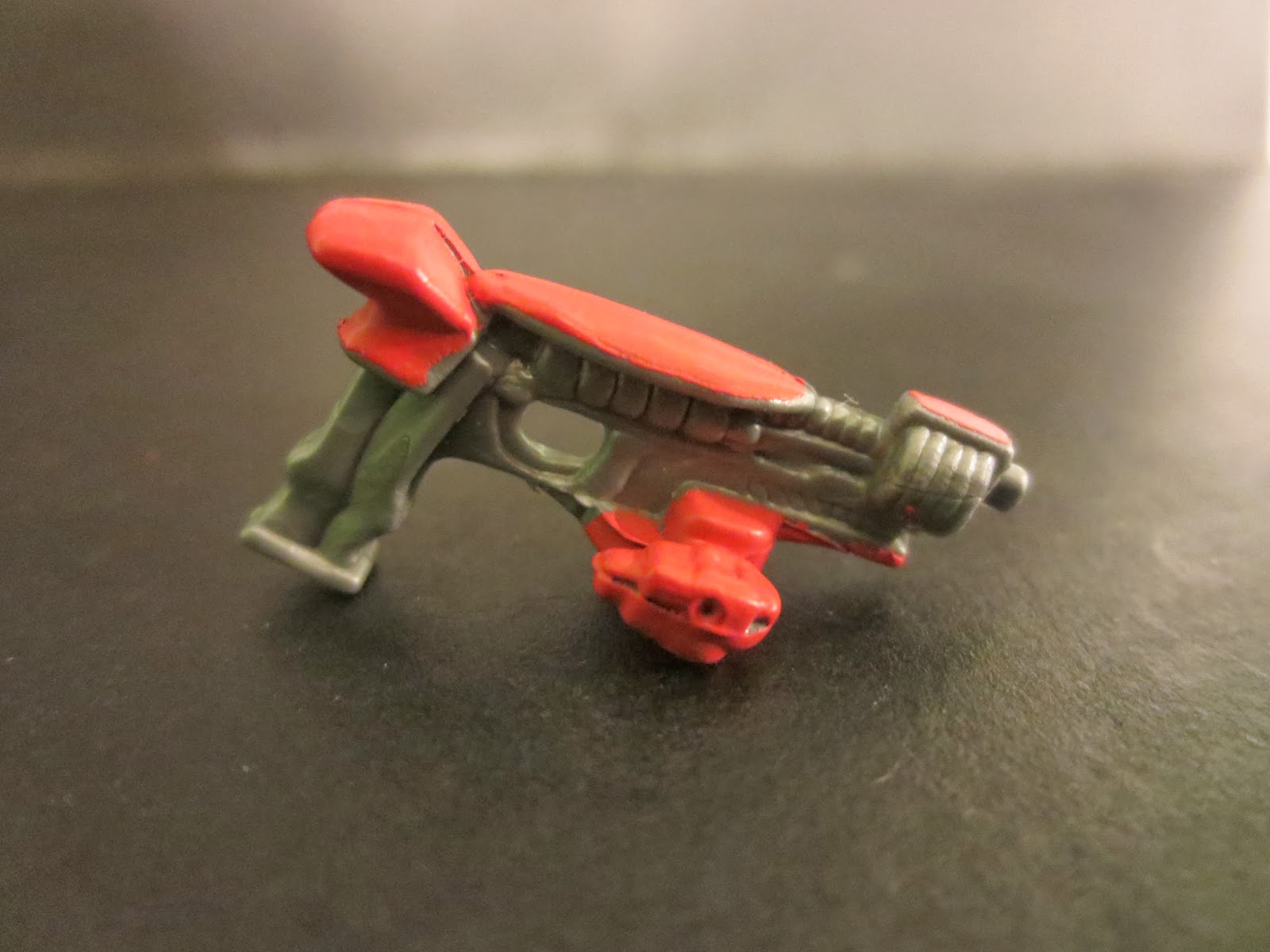 Either pistol can easily fit in Red Skull's right hand, but the larger pistol won't fit in either of the two holsters. That's kind if a drag, but that's what happens when you don't think through re-use. 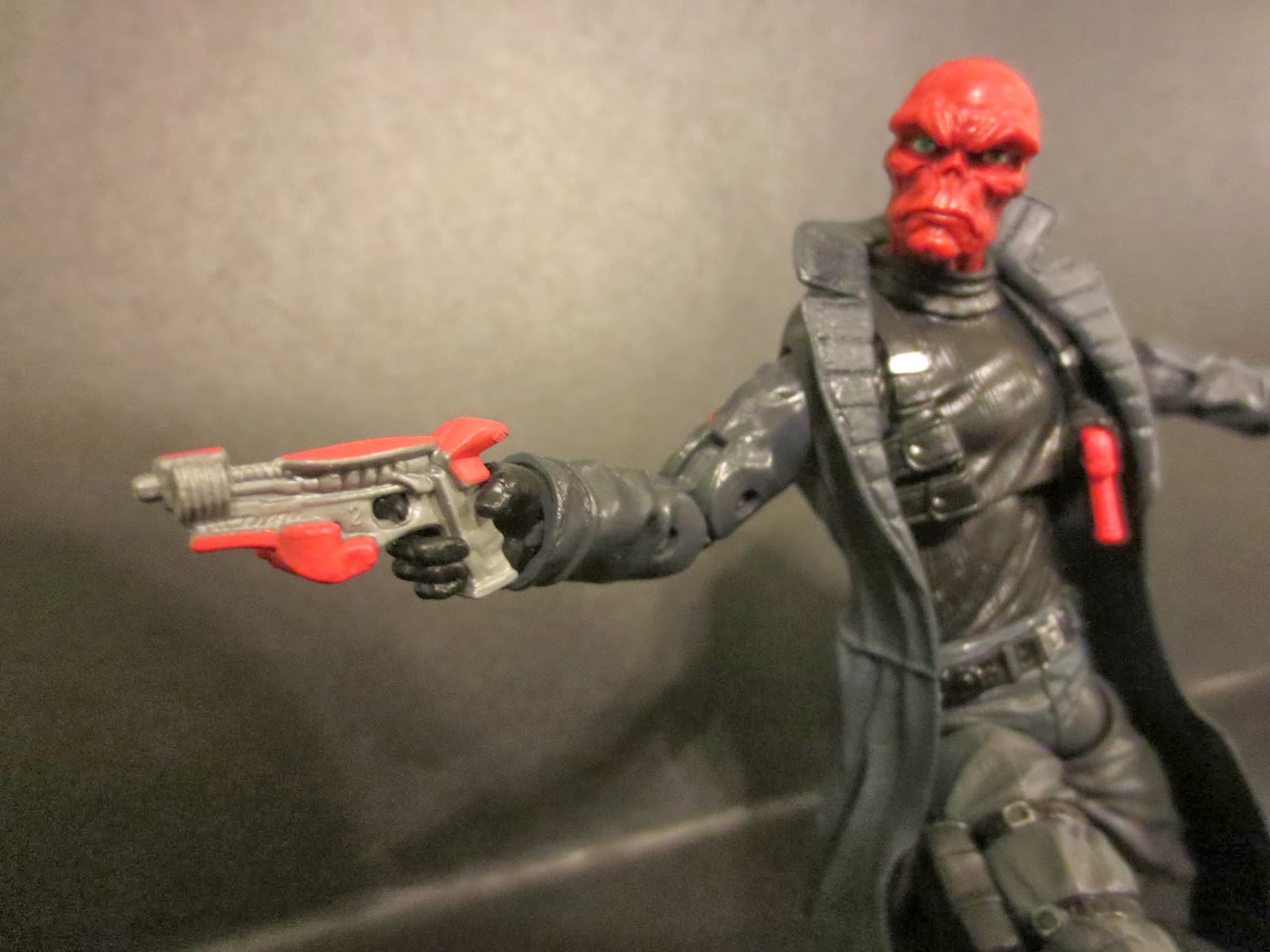 I'm really conflicted with this guy. Great accessories, a fantastic head sculpt, and some nice, solid paint work are the positives while the incredibly awkward articulation points (shoulders and hips) along with the gummy limbs are the drawbacks. I mean, there is no way to let this figure put his arms down. Oh, and the fact that he has an empty holster (since one of his guns won't fit) which goes against one of Barbecue17's Action Figure Ten Commandments (and yes, I really do have such a thing; I'll show you some day). Overall, Red Skull gets a Good. While this is without a doubt the best Red Skull head sculpt I've ever seen, the articulation issues keep him from being a truly great figure. He's not terrible, but he could have benefited from more solid plastic and a bit more thought in his sculpt. 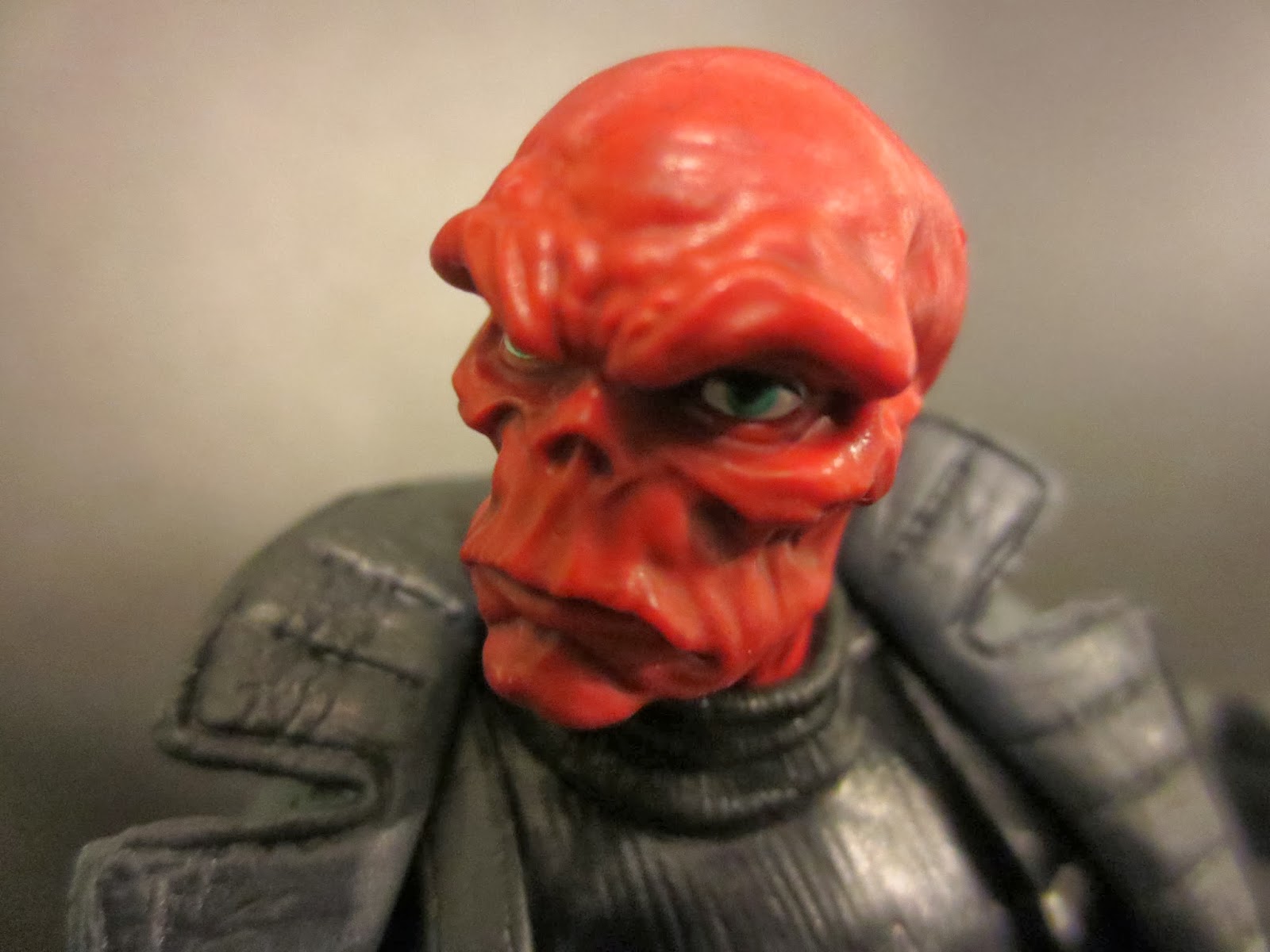 Right now you can't order Red Skull by himself but you can order the first six figures in this series of Marvel Legends (Marvel Now! Captain America, WWII Captain America, Red Skull, Hydra Soldier, Baron Zemo, and A.I.M. Soldier) from BBTS in one case right here.