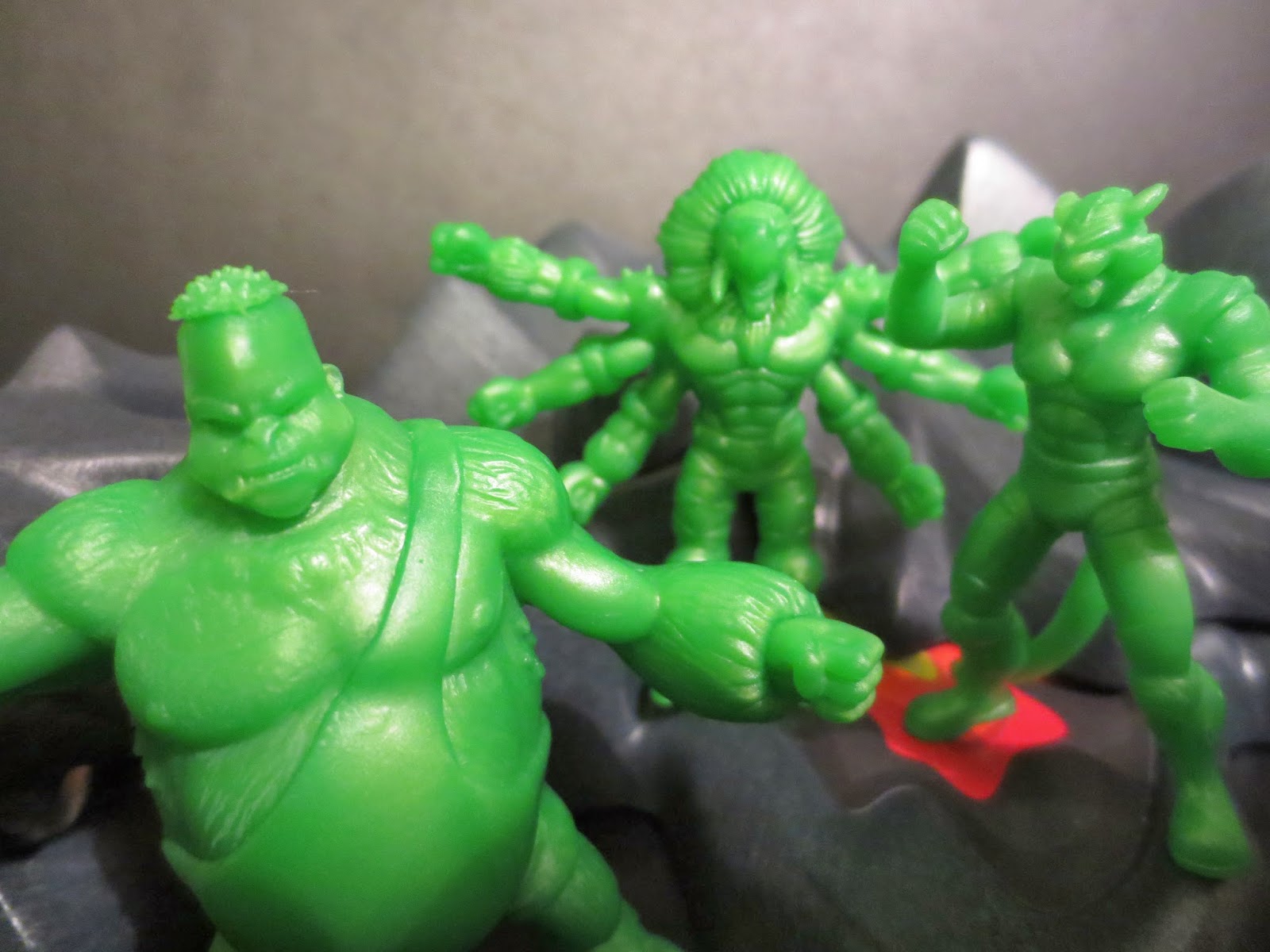 Earlier this month I posted some info on a new colorway for the three Mystical Warriors of the Ring figures that have been released in the PVC line so far. As a fan of this line (and all things M.U.S.C.L.E.y) I definitely wanted to get my hands on these convention exclusives that were available at KC Planet Comicon earlier this month and will be available April 27th-29 at Chicago's C2E2 (www.c2e2.com) in the Nerd City Booth 750, located in "THE BLOCK." I managed to get a set and I have to say that I love them! Kayin Kungaa, Sheldon Sabre, and Widowmaker look absolutely fantastic in this new color scheme. While it's only been about a year since MWOTR hit the toy scene, they've made some awesome progress with this line. I reviewed these guys in the "flesh" color scheme back in October, but I'll gladly take a swing at these little green guys, right after the break.... 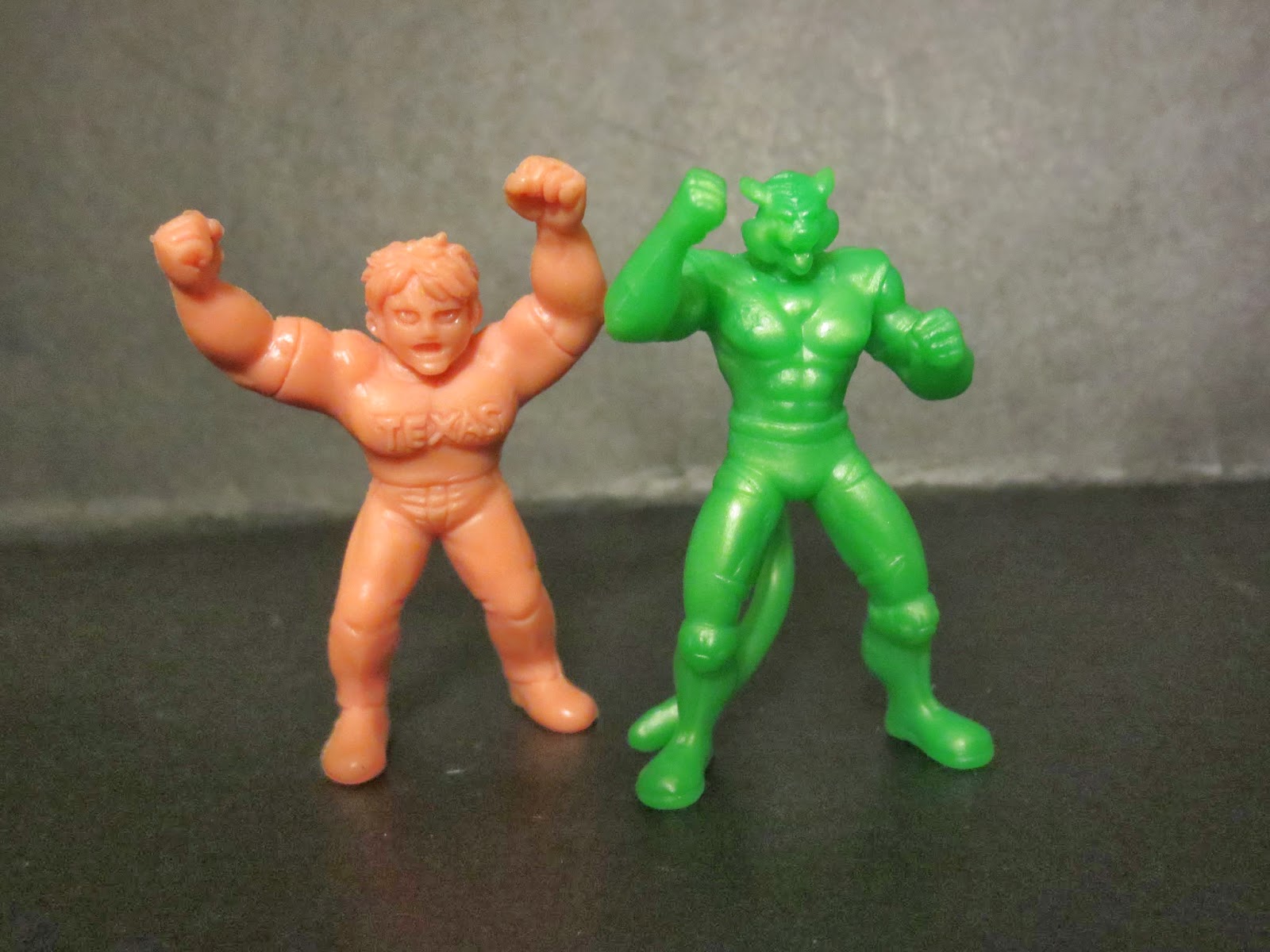 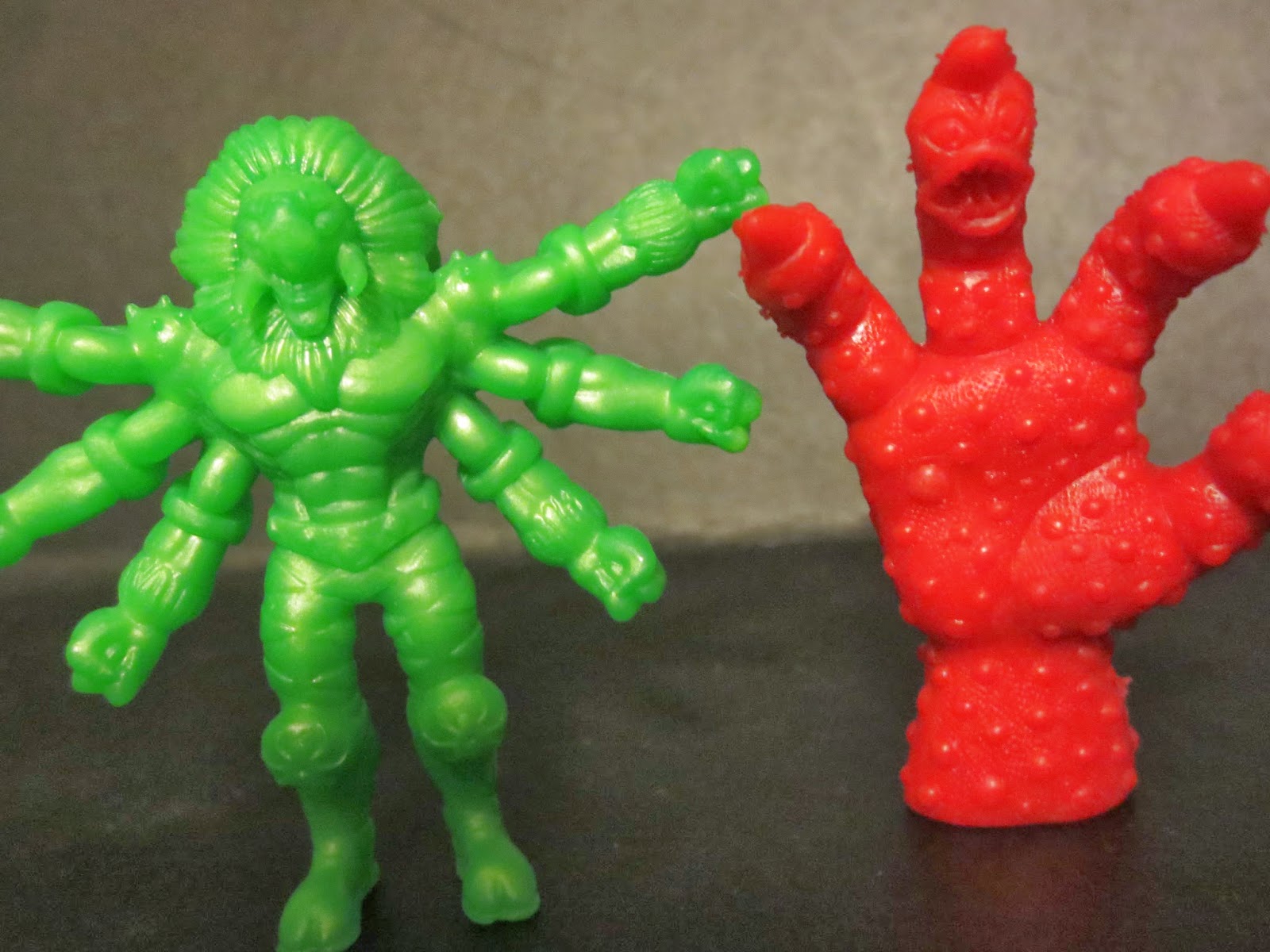 The three figures come bundled as one set. Sheldon Sabre (the tiger man) and Widowmaker (the giant spider) seem to be the normal sized characters in this line, so their height of around 2 inches seems to set the standard,helping them to fit in well with M.U.S.C.L.E. and the OMFG stuff from October Toys. 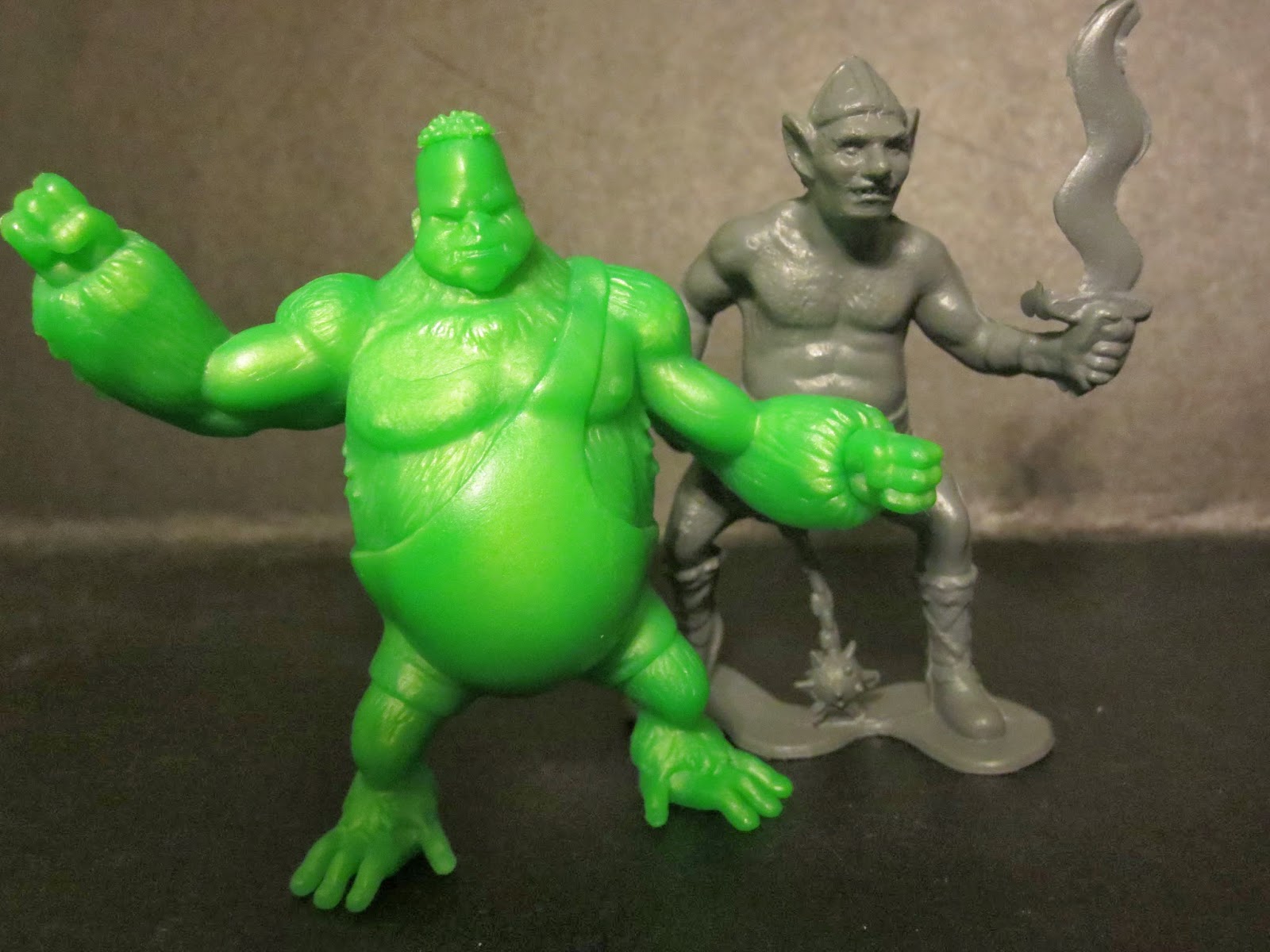 Kayin Kungaa is quite a bit larger larger (2 1/2 inches) which fits his fearsome visage. I love that MWOTR is able to produce these guys in a variety of sizes. While these are anthropomorphized animals, they're done in a more realistic style rather than a caricatured one. Remember that these are solid PVC figures with no articulation or paint. 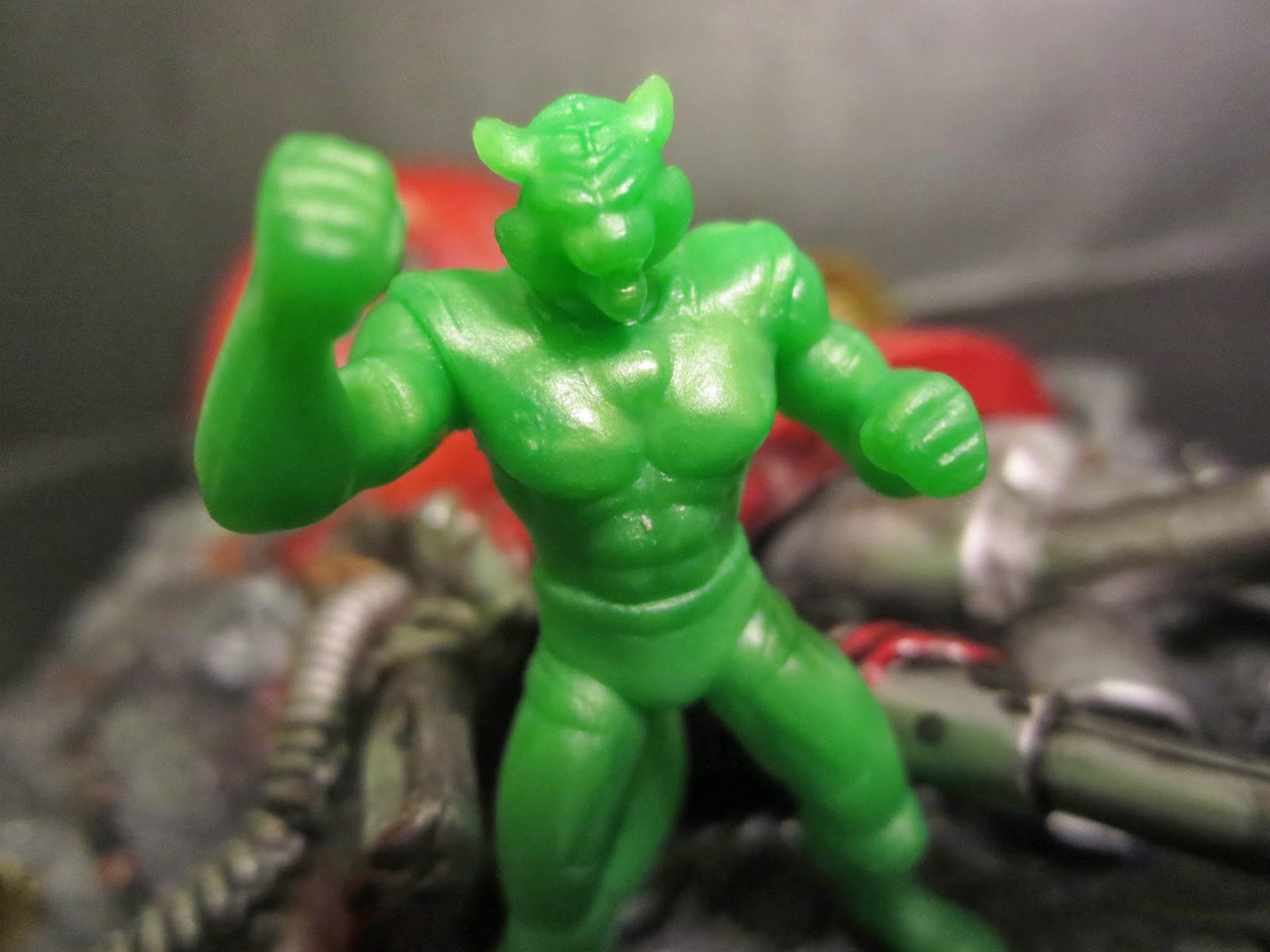 Sheldon Sabre- Sheldon Sabre seems to be the average joe of this line, although that's saying something when you're talking about a wrestling tiger in boots and speedos. A fierce tiger who is also a champion in the AWF, Sheldon is definitely muscular (he works out) and showing off in his wrestling trunks. There's some interesting detail representing his stripes, even on his tail. Once again, I love the knee pads with paw prints on them- a very cool detail. I like the pose as well; it's got some character to it as his fists are raised, but he's still posed rather neutrally which is good for display. Sheldon Sabre stands up great on his own, so no worries about him falling over. 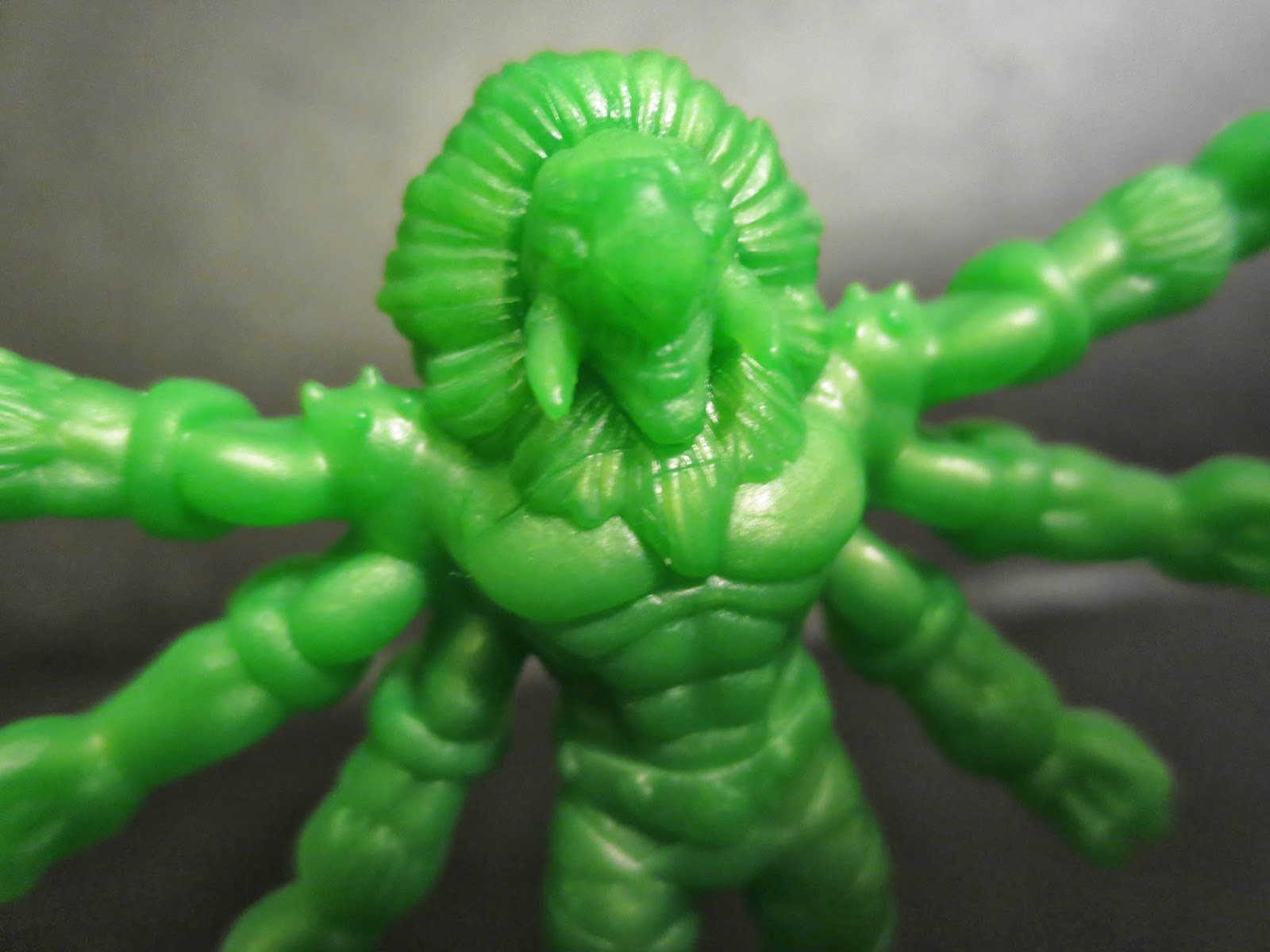 Widowmaker- I hope you're not afraid of spiders, because Widowmaker is definitely toy you'll want to own.. A six armed spider warrior, Widowmaker is also really, really built. Look at those abs! Each of his six arms has a mixture of smooth, spiky, and hairy surfaces. The face is really creepy, too; he's got a wicked little grin with fangs poking out from the sides, all surrounded by a truly epic mane (do spiders have manes?). Like Sheldon Sabre, he's clad in cool wrestling gear. He has elbow pads and knee pads with a spider logo on them, which is a neat detail to carry from figure to figure. I'm really liking the character themed pads. Neat little details like this really go a long way. Widowmaker has a very neutral pose which definitely is my preference with most minifigures. He stands great on his own and just looks wicked and full of hubris. 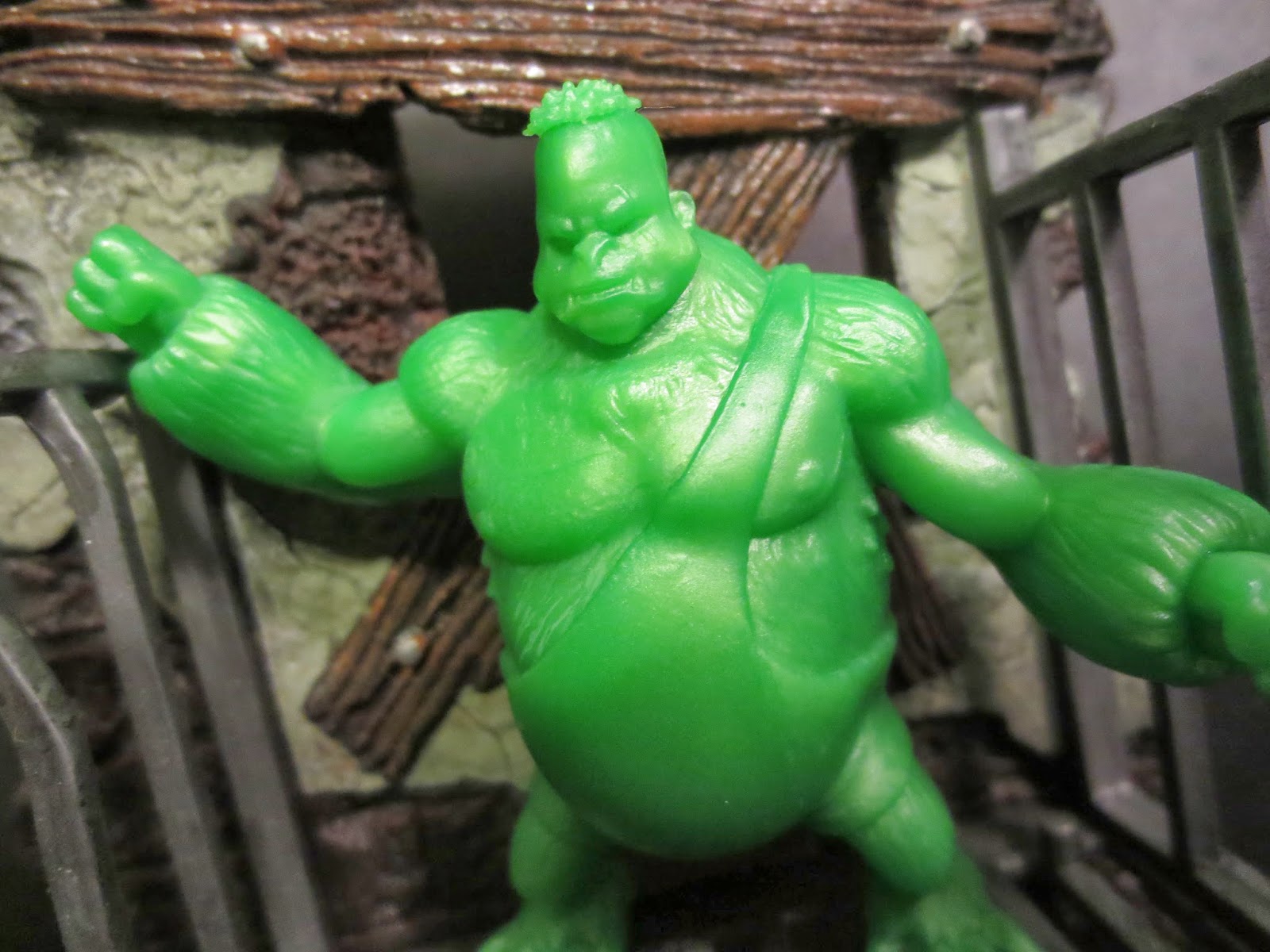 Kayin Kungaa- Once again, the knockout of this set is Kayin Kungaa! This guy reminds me of equal parts King Hippo from Punchout, King Kong Bundy, and Donkey Kong; he's massive, mean, and menacing! That's a lot of Kong! He's quite a bit taller than everyone else, which is suiting to his big, round, hairy physique. Check out those giant fists and that head sculpt. It's shaped like an eggplant with a nasty scowl and a cool tuft of hair on the top of his head. This guy probably gets by on intimidation alone! The only complaint I have about Kayin Kungaa is that he can fall over backwards from time to time. You'll have to play with his feet a bit in order to get him to stand more securely, but a little jostle sends him tumbling down. Still, this guy is wicked fun to play with! 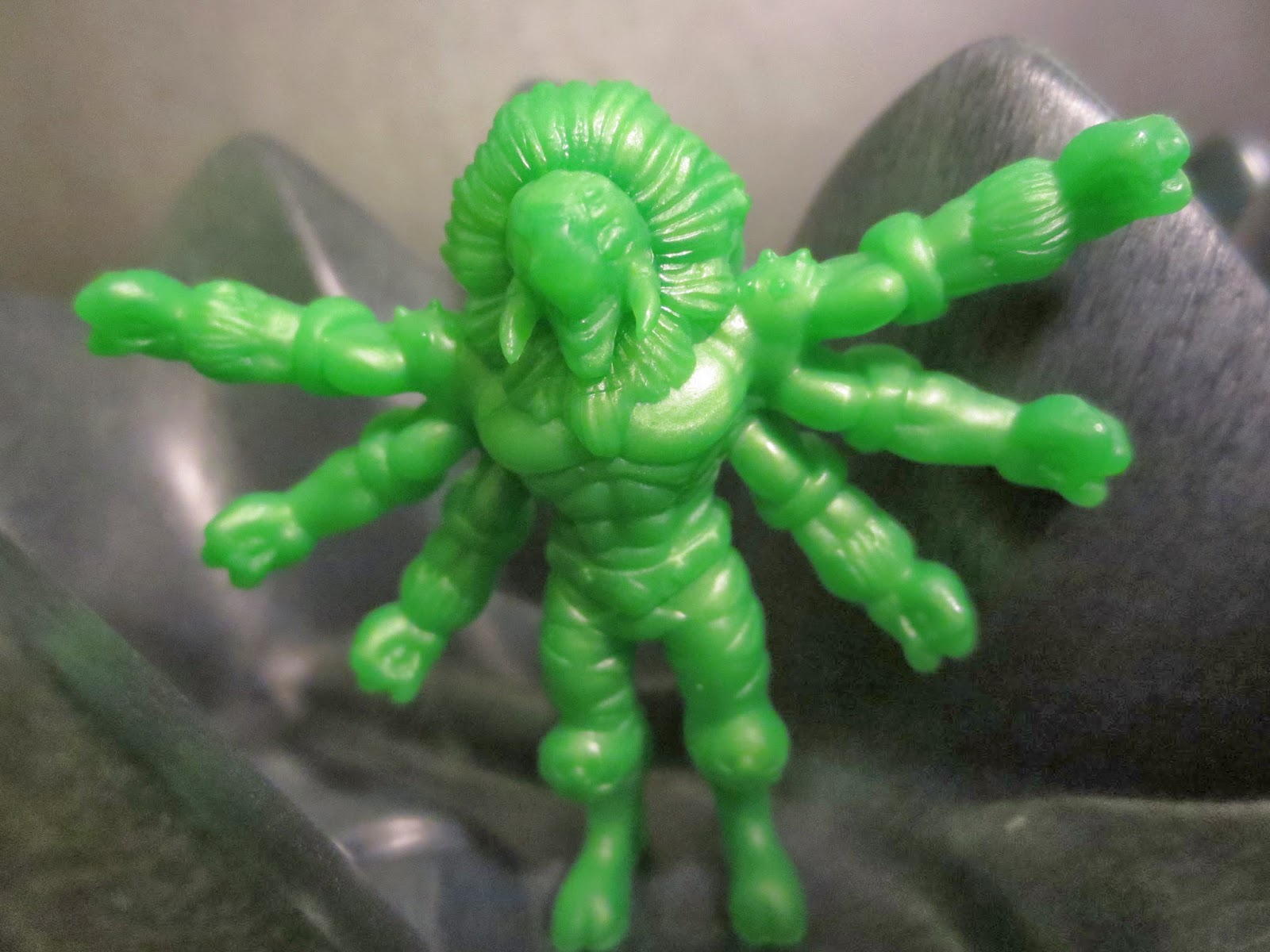 In my original review of these molds, I stated that I was impressed by the crispness of the detail. These figures still look great, even with all of the smaller details and textures, but I think the pearlescent neon green color scheme actually makes them look a bit more crisp and makes the detail stand out even more. Perhaps it's the way that the pearlescent plastic both reflects a little bit of light and adds some subtle variation to the figure's color. While I tend to like the traditional M.U.S.C.L.E. pink on my minis, I think I prefer this color scheme on these guys. Widowmaker looks absolutely perfect with it!  These are fantastic minifigures that really get me excited with a childlike energy. At $3 apiece, they are also quite affordable. I'm really hoping that Fantastic Plastic continues to add new characters into the PVC releases so that my collection can continue to grow. With great companies and lines like October Toys, S.U.C.K.L.E.S., and Fantastic Plastic's Mystical Warriors of the Ring, we really do seem to be entering a new golden age of minifigure goodness. And you know what? I'm all for that! These guys easily get a Great and a 1/2, a boost from the previous release due to the brilliant color scheme. 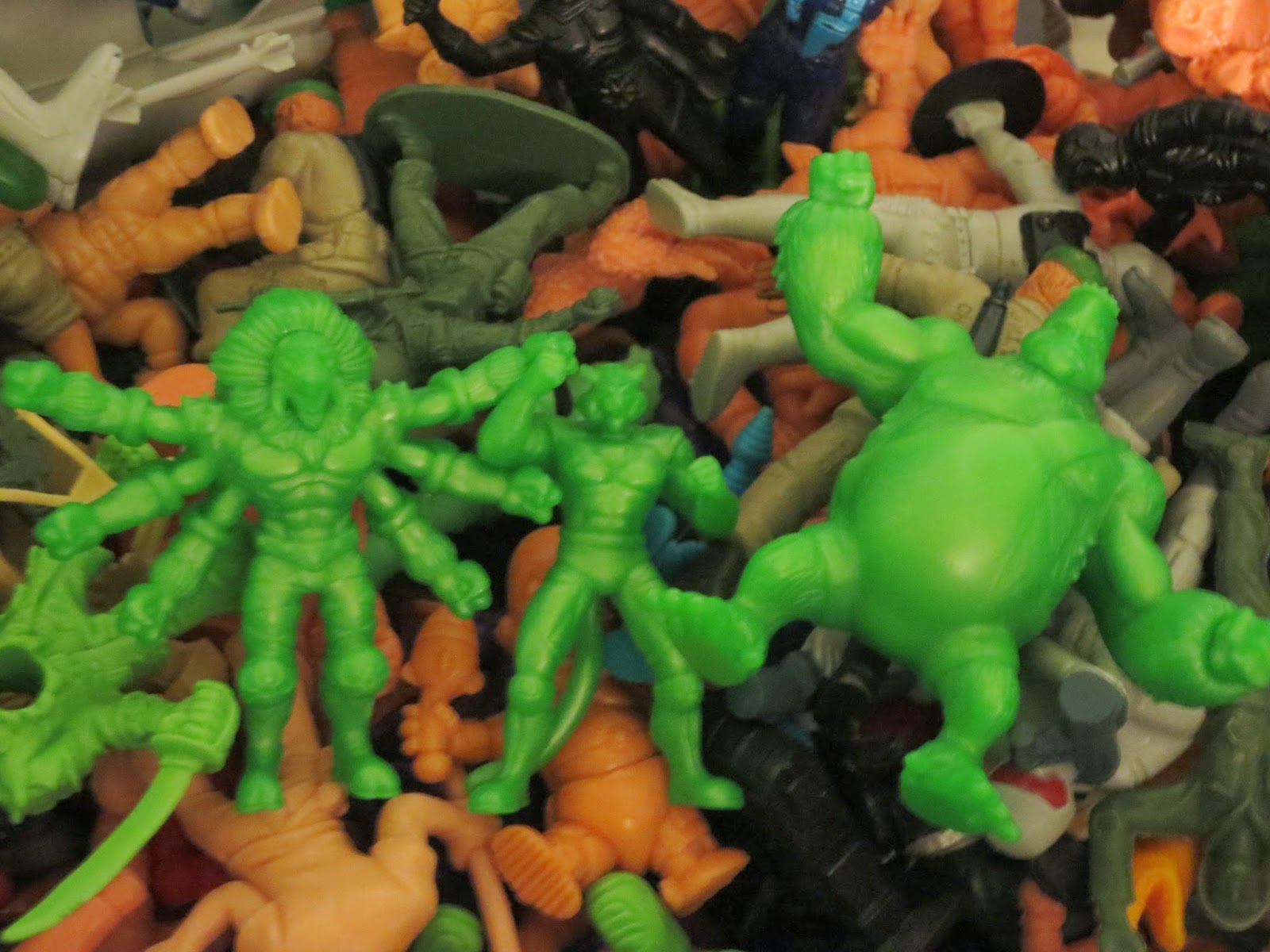 Want a set of your own? You'll either need to head to Chicago's C2E2 (www.c2e2.com) and visit the Nerd City Booth 750 in "THE BLOCK" from 4/25-4/27 or beg a friend in the Chicago area to snag them for you! You can also check out the Mystical Warriors of the Ring website to check out all of the different options available for previous releases right here!

Check out my review of the "flesh" colored set of these guys here!