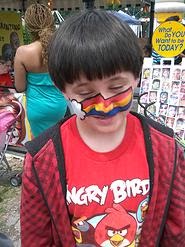 Hey everyone! Back in February we reported on a really sad story about a young boy named Michael Morones who attempted suicide. It was reported that Michael was bullied at school, quite possibly due to his love of My Little Pony: Friendship is Magic and his labeling of himself as a brony (a label worn by millions of male and adult fans of the show). Today, fortunately, we've got some better news for you! On Monday, it seems that Michael has begun to substantially move his arms and balance his head a bit. These might seem like small steps but they really indicate that Michael is indeed improving. Here's a quick update from Michael's family, after the break....


"Currently, Michael is rehabilitating at Levine Children’s Hospital in Charlotte, N.C. He is continually making progress, having become more responsive through his movement and the maintained balance of his head without support for a substantial amount of time. You can see footage of his progress on his YouTube channel.
Although Michael has shown great improvement, we still have a long way to go and we need your help. With Michael returning home, we will face many expenses related to his care and well-being, including the purchase of a van, new wheelchair, and wheelchair ramp. Your donations will go a long way in helping ensure that Michael’s transition back home is a smooth one. All monies donated will be used for Michael’s long-term medical needs, for the well-being of the family, and to support the Foundation’s mission to educate communities on social development and the well-being of youth around the world."

You can continue to learn more about Michael at Michael Morones.org as well as see other events that good folks are putting on to help raise support. You can even make a donation of your own over there if you'd like.