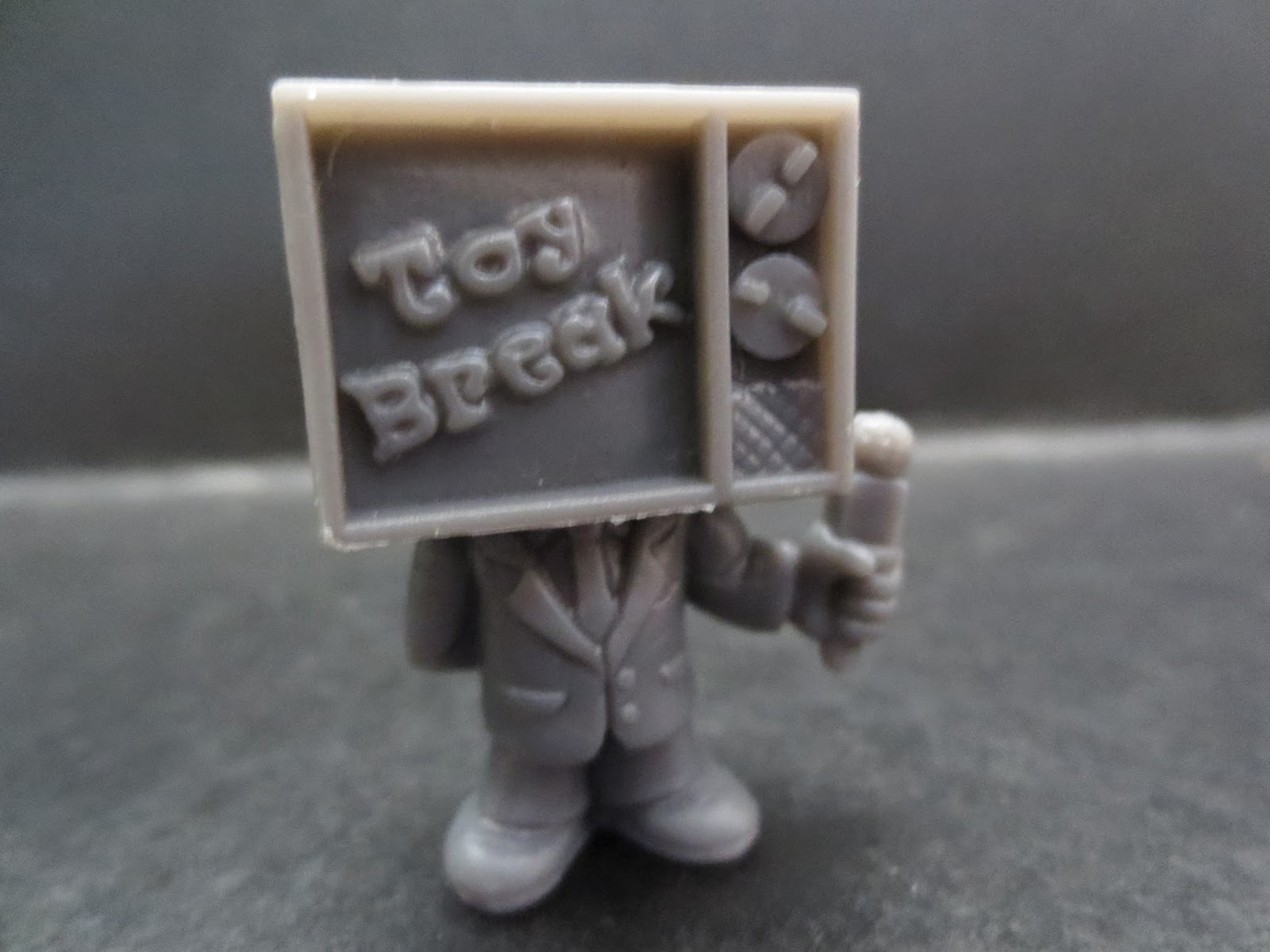 When I ordered my Luck Green Pheyden figure in March, I also added this guy to my cart. That was a smart move on my part because now this little Toy Break Mascot minifigure seems to be gone from October Toys' website. If you're not familiar with Toy Break, it's a fun little webshow and podcast that focuses on toys; action figures, designer vinyls, minifigures, Toy Break covers it all. Check out their cool show later but check out their cool little minifigure mascot guy right now, after the break of course... 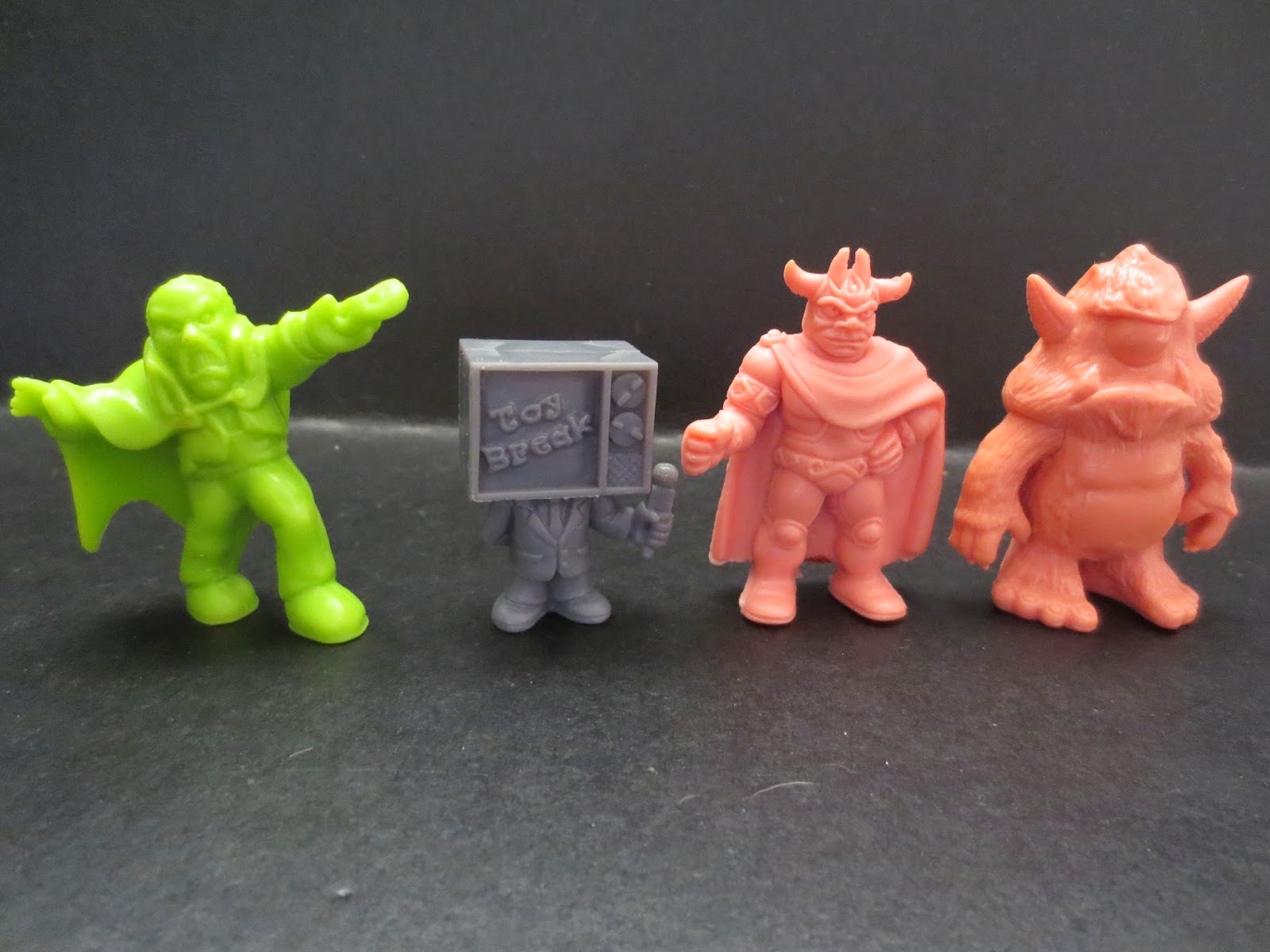 The Toy Break Mascot (hereafter referred to as TB guy) is a little under an inch and a half tall and really puts me in the mind of the Announcer minifigure from M.U.S.C.L.E. He's even got the same suit, pose, and height difference between your average minifigure, so this is clearly an homage to that figure (anda cool one at that). He's a solid plastic minifigure with no articulation who stands quite well on his feet, on his head, and on his right side. If you want different display options for him, you've got them. 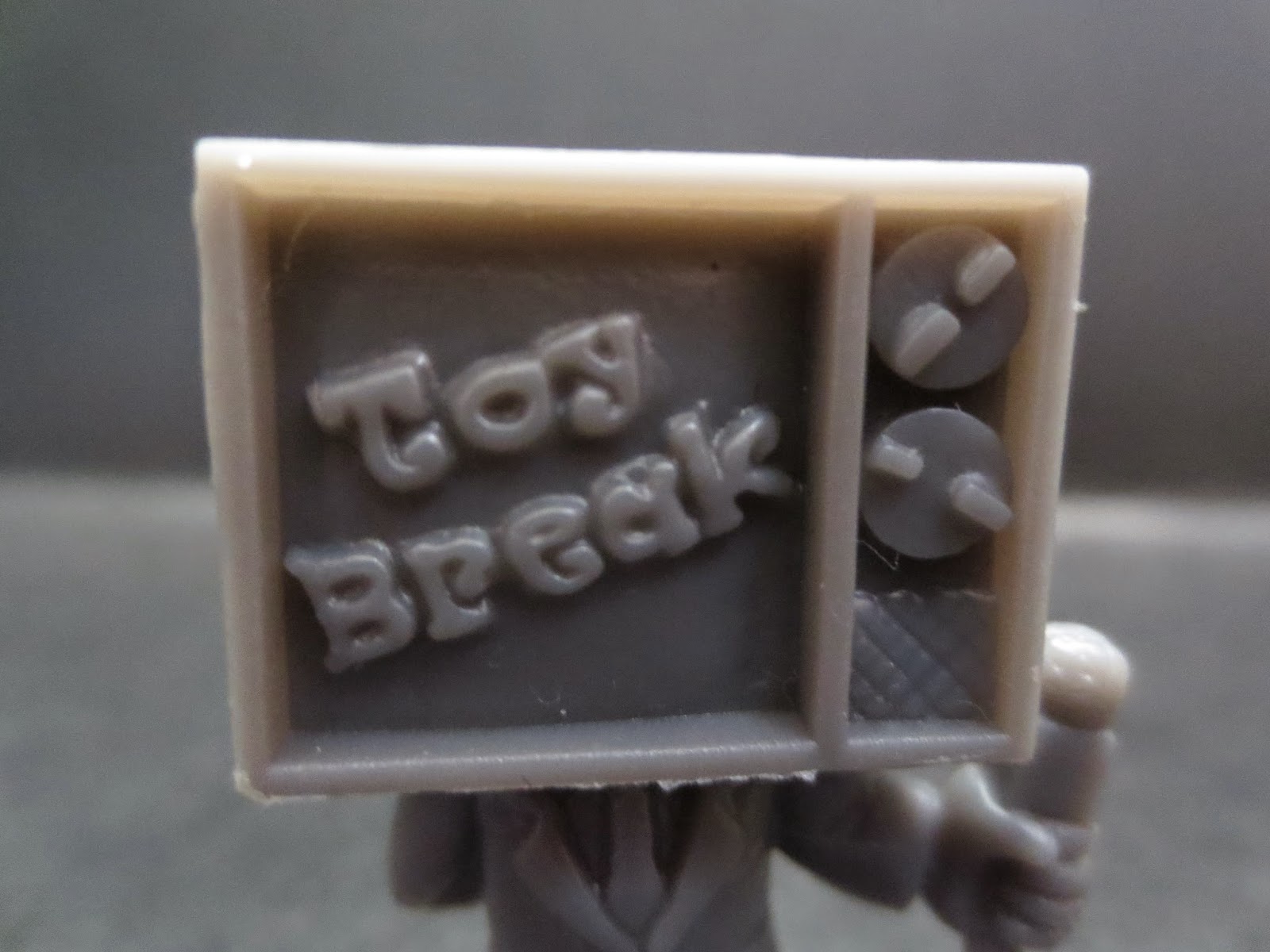 October Toys does some of the finest minifigure sculpting on the market so even a simple concept like "guy in suit with a tv for a head" comes out being something little special. I like TB guy's relaxed pose: Right hand balled up in a fist behind his back, left hand casually holding a microphone. His suit is very cool as little details like the knot in his tie, his lapels, his pockets and buttons, and the creases in his sleeves where his arms are bent are all clear and crisp. Turn him around and you'll see the initials for October Toys Minifigures (OTMF) etched into his back, a cool throw back to the little details on the back of M.U.S.C.L.E. figures. His head is simply an older TV with two dials and a little panel on the bottom right. The words "Toy Break" are actually formed by raised letters on the screen. An antennae would have been a cool addition as it pops up on the Toy Break logo, but stuff like that doesn't always work on minifigures. 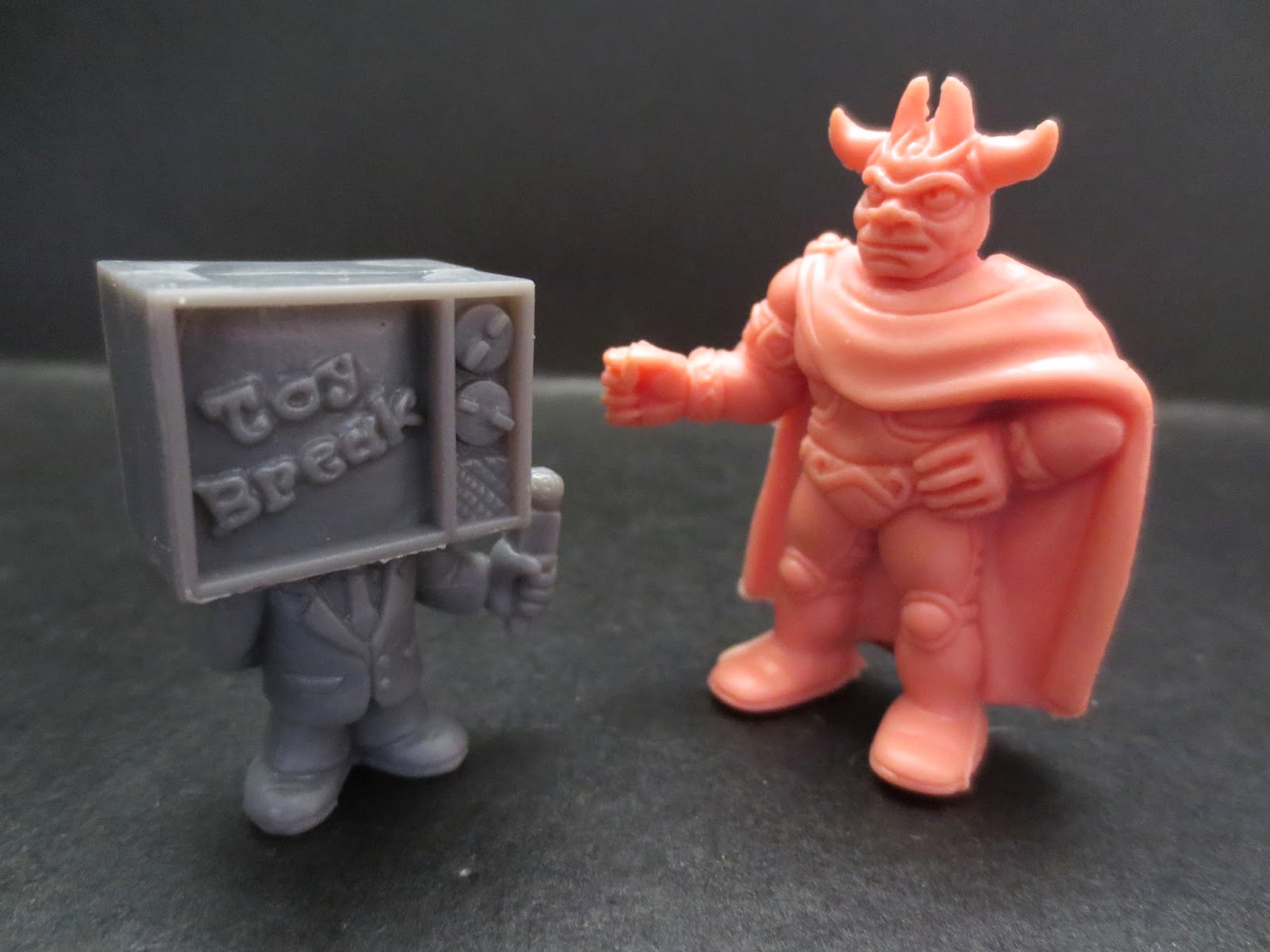 Most traditional minifigures aren't painted and are simply molded in colored plastic. That holds true for TB guy as he is molded in a really nice gray plastic. I love this color as it not only looks nice but it also seems to really help the details stand out. I usually prefer the pinkish "M.U.S.C.L.E. flesh" or green for my minis, but this gray looks spectacular. I might have to track down some of the gray variations of the OMFG guys. 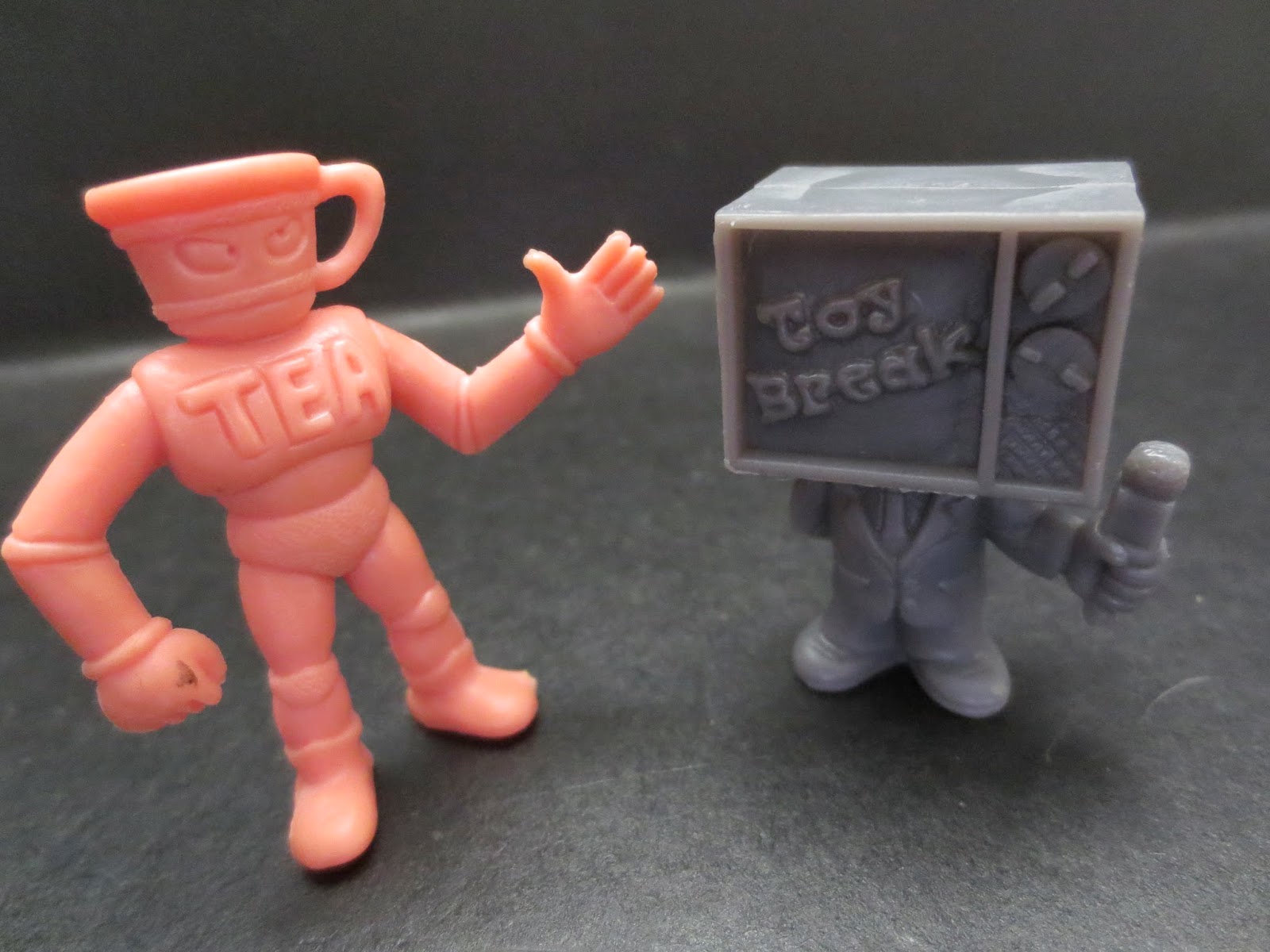 The Toy Break Mascot (whom I've been calling TB guy since the first paragraph but whose full name I've decided to use once again since this is the final paragraph) is a really cool mini. When I ordered mine in mid-March I think there was one other color (maybe white?) and I now wish I'd ordered it, too. I love him! I love minifigures that bring a unique concept to the table and this guy definitely does. Great sculpting and a nice gray color scheme make him a minifigure worth tracking down. I'm giving him a Great and a 1/2, so great job October Toys!

The Toy Break Mascot seems to be sold out right now, but you can find more cool minifigures at the October Toys store. Check them out!

I've reviewed a few other October Toys minis, including: