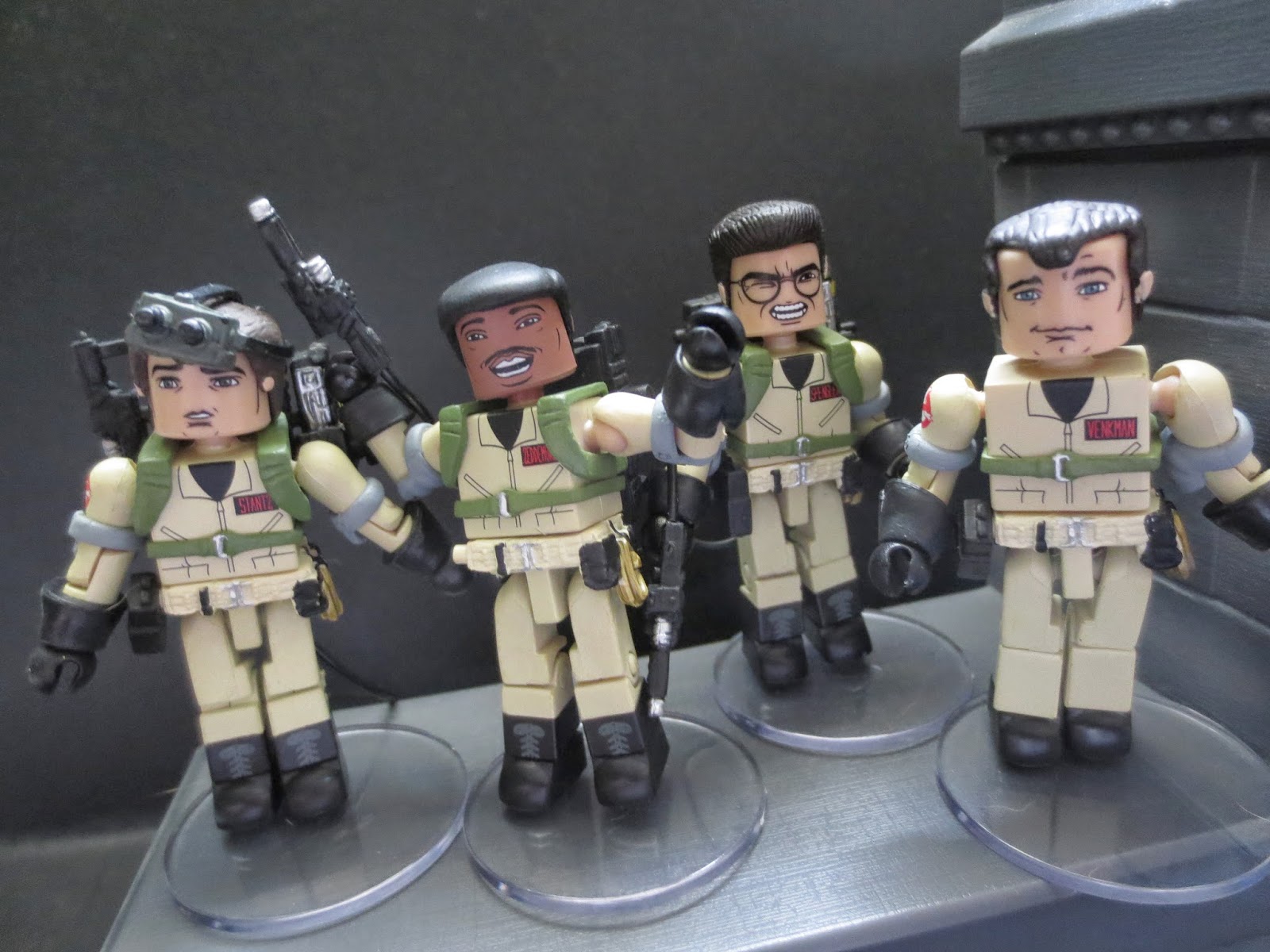 What's the greatest Ghostbusters toyline ever? The Real Ghostbusters from Kenner? Nope. Mattel's Ghostbusters line? Absolutely not. NECA's offerings? Please. The best Ghostbusters line ever is Diamond Select and Art Asylum's Ghostbusters Minimates. Not only does the line contain nearly every character from the two films but it also contains characters from the videogame and The Real Ghostbusters animated series. It's been quite awhile since there were any new Ghostbuster minimates released (November of 2011, I believe) so I was thrilled to see that Diamond had another boxed set slated. While it doesn't give us any new characters, it does give us the first versions of the Ghostbusters from the line with removable proton packs. Honestly, that's enough reason for me to jump in and snatch these guys up, even as someone who owns most everything released in the line. For new collectors, this is also a great chance to get the four guys themselves in their uniforms from the first film. Ready for a look a these guys? Then join me after the break.... 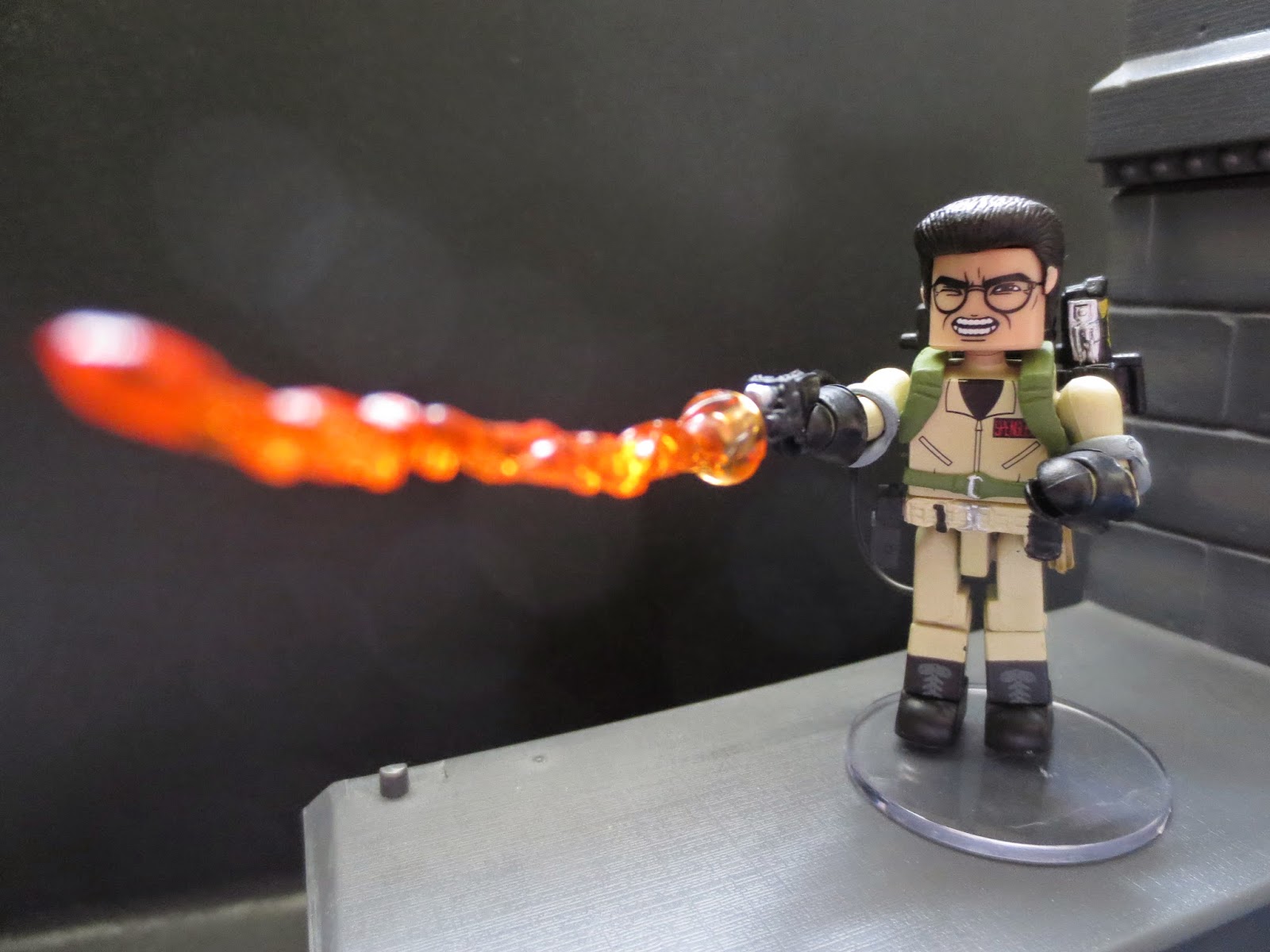 The average Minimate is a little under 2 1/4 inches tall but these guys are a little bit taller because of the new waist/belt piece they each have. While Minimates tend to have a blocky body, they also have rounded feet and hands with cylindrical heads. They're kind of built like a larger, more articulated Lego minifigure. While these guys share the main body and head with pretty much every other standard Minimate out there, there are some pretty significant differences between these and the previous versions of these guys. First, rather than have a sculpted torso piece that slides over the basic body with an attached Proton Pack, these guys just use the basic body itself. They have new waist pieces to allow for allow for all of the gear to hang off their belts and their Proton Packs simply slide on the torso like an actual backpack. Secondly, they have the same cuffs over their wrists as the Ghostbusters II Slime Blower Ghostbusters to better replicate their heavy duty gloves. Lastly, Egon has a new hair sculpt that looks way more accurate to the late Harold Ramis' look in the film. 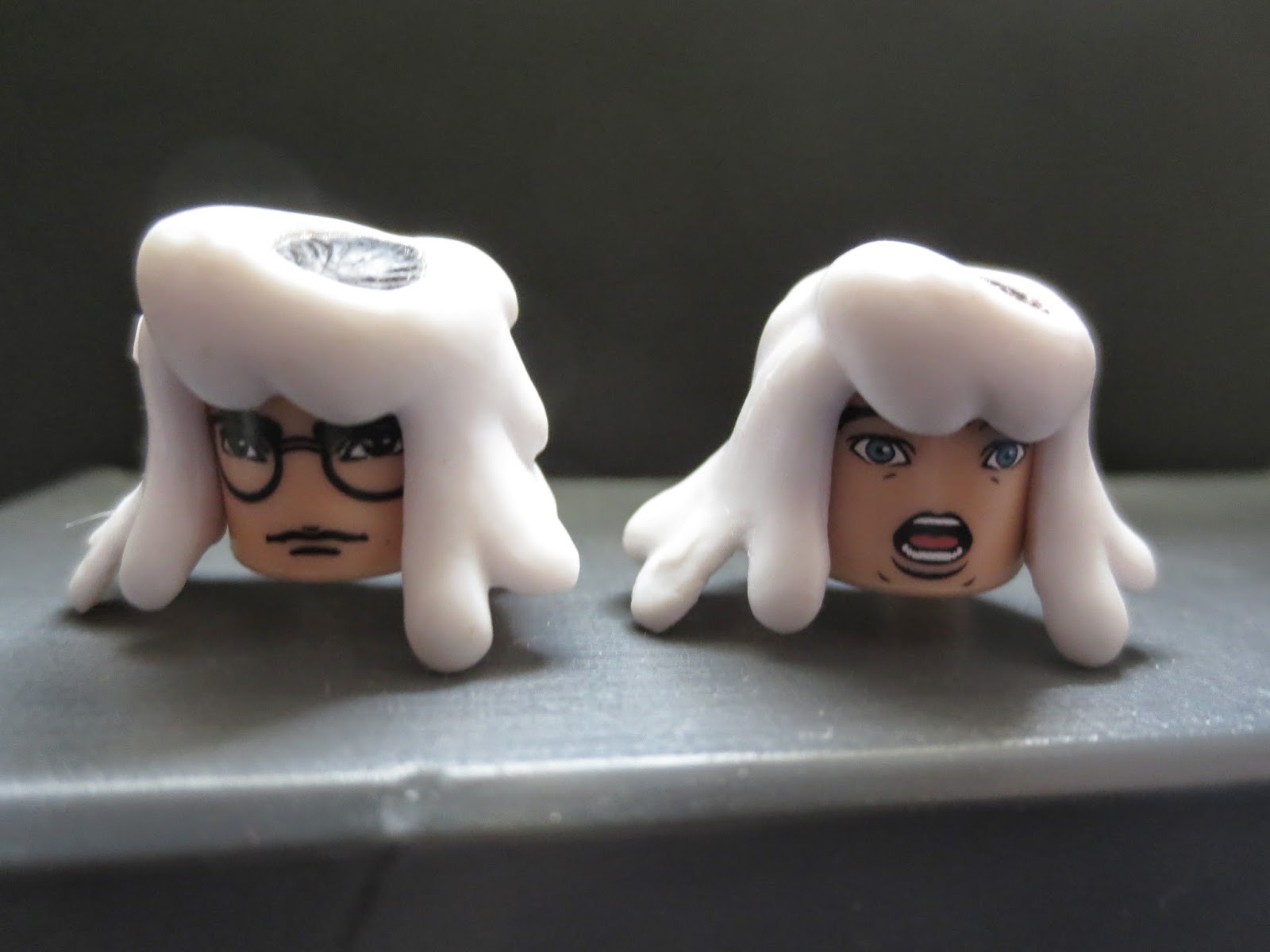 For being so small, Minimates are pretty well articulated. Each of these guys includes swivel ankles, hinged knees, ball jointed hips, a swivel waist, ball jointed shoulders, hinged elbows, swivel wrists, and a ball jointed head. While not every join has a tremendous range of movement, you'll be impressed by some of the fun poses you can get these guys into while playing and displaying them. Because these guys can have their uniforms on without having to wear their Proton Packs, I'm hoping they can fit into an Ecto-1 that Diamond Select and Art Asylum will someday produce! I can dream, can't I? 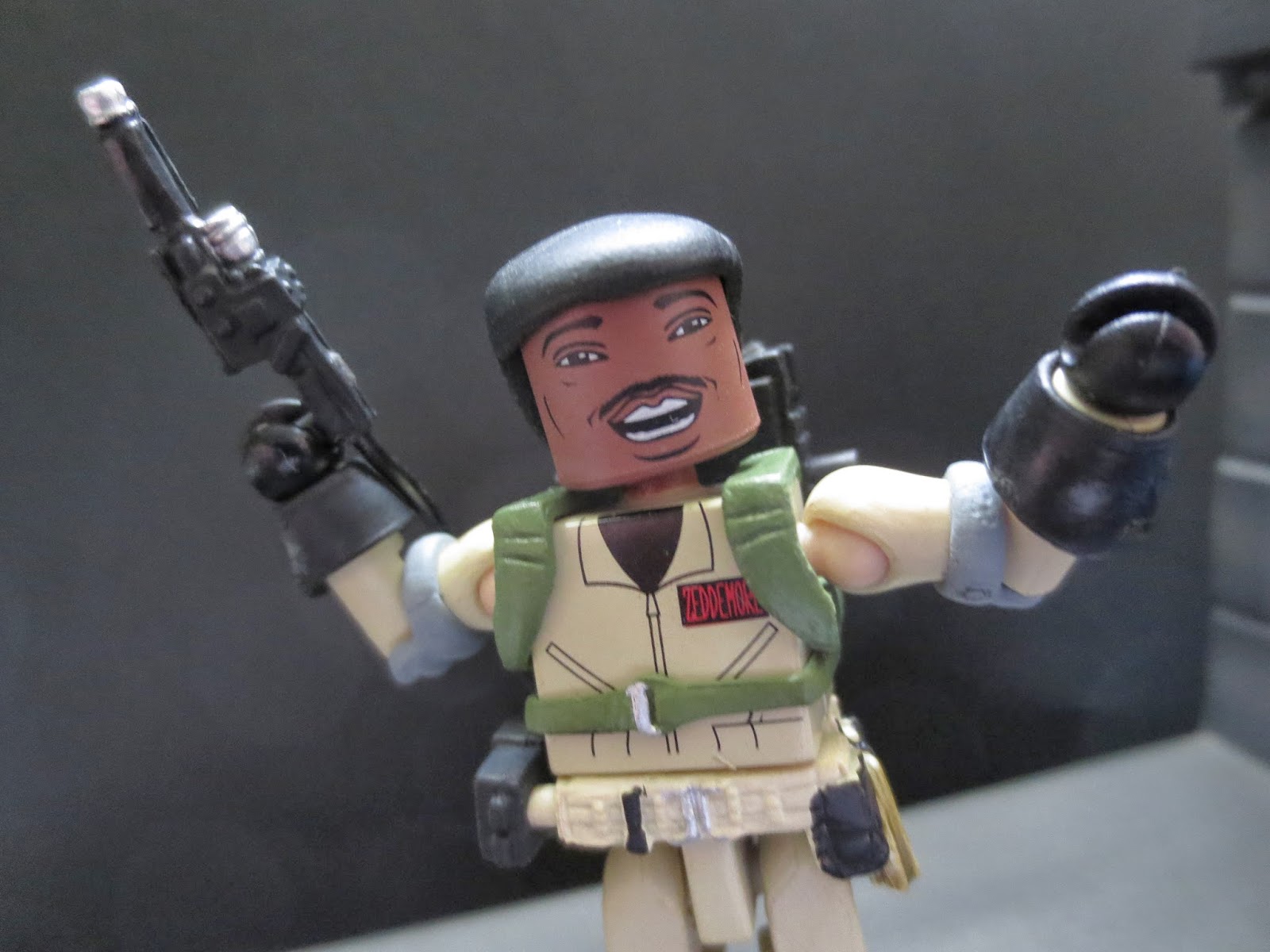 Since Minimates are typically flat with sculpted pieces being the exception, there isn't as much to say about sculpting here as there would be on your average action figure or minifigure. The new waist pieces give the Ghostbusters their belts with the Belt Gizmo, the length of cord, and a spot to attach the removable MT-500 radios. You can even see the little details on the pistol belts! Peter, Winston, and Ray have the same hair as the previous figures but, as I mentioned earlier, Egon has a new hairsculpt. Initially I thought this was a reuse of the Ghostbusters hair sculpt to capture Egon's unique hairdo, but this looks rounder on the top than the hair on the Ghostbusters 2 Courtroom Egon. 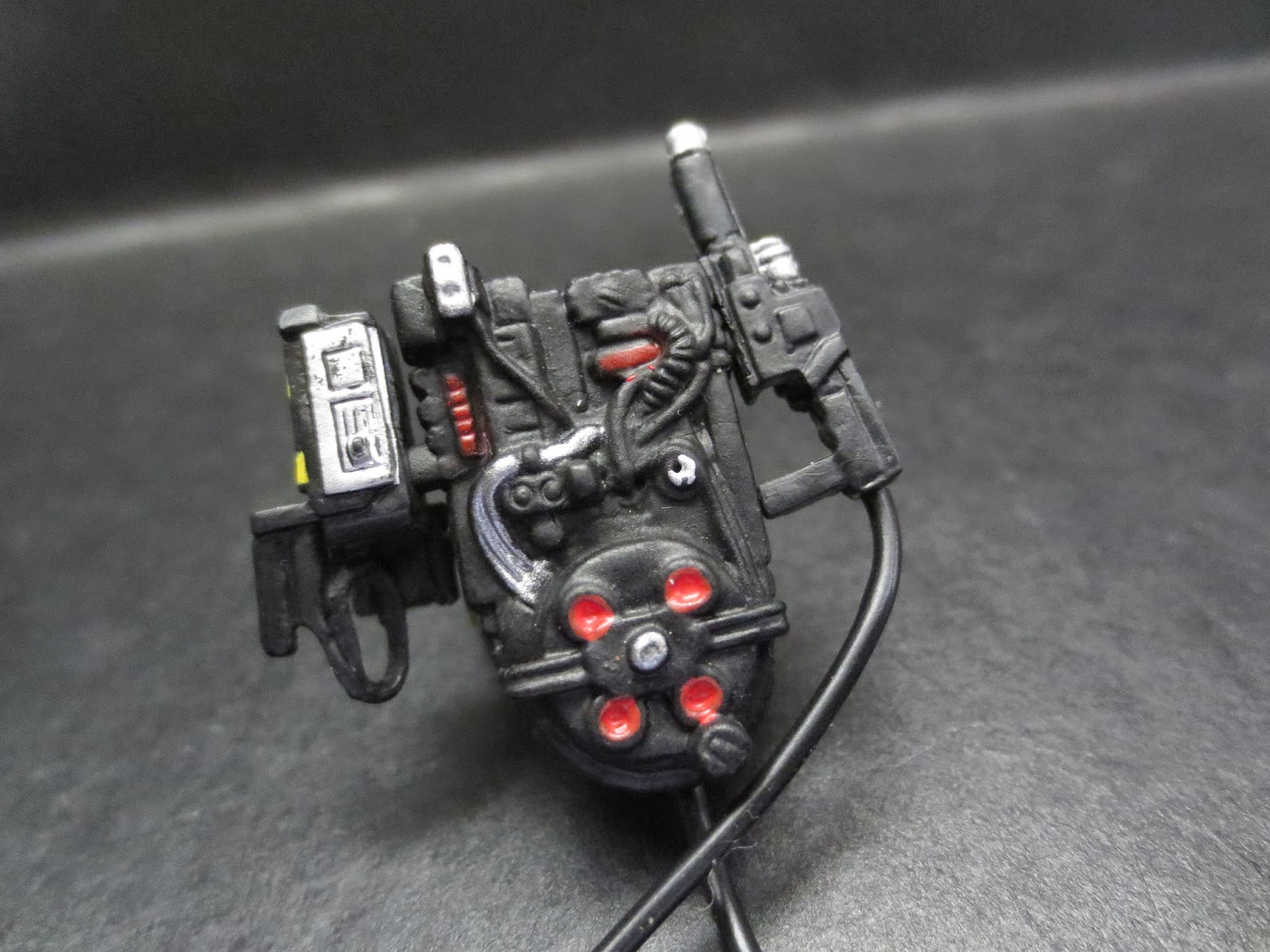 The paint work is really where these start to stand out. Each figure looks really good as all of the little details on the belt are painted, and painted well. The torsos are all the same, with the exception of the name tags on the left breast, but each pocket, zipper, and the elastic waistband is accounted for. Each 'buster has the "No Ghosts" logo on their right shoulder, all these figures are missing a black outline like the earlier ones. It makes the logo look much less clean and crisp than the previous efforts. They've also got little laces painted on their boots.  The uniforms on these are much more of a light tan than the grayish look of previous releases. Honestly, it's tough to say which color is more accurate (although I tend to go with the more grayish look of the previous sets). 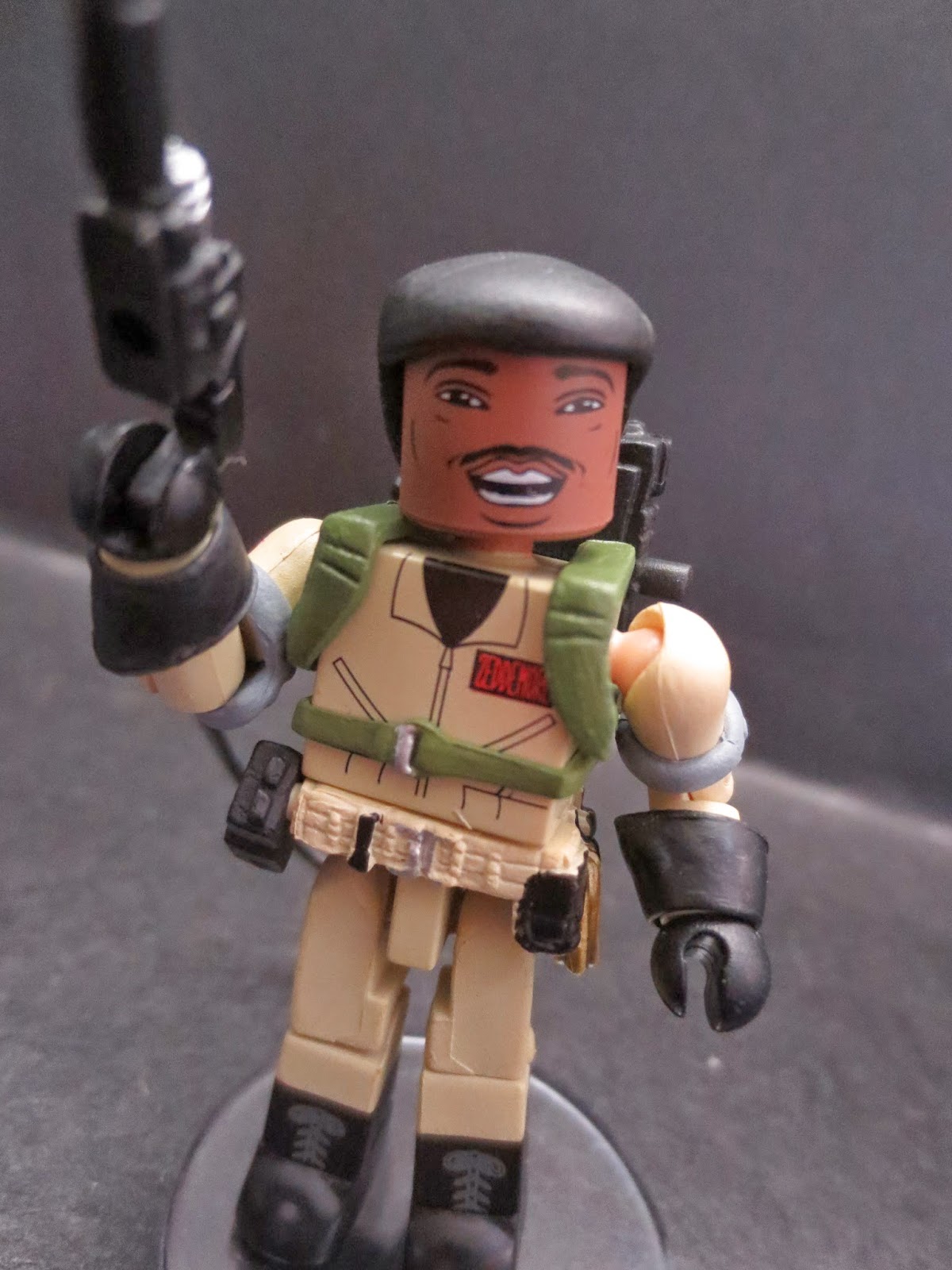 Let's look at the face stamps individually, starting with Winston since it's his line that gives this set it's name ("I love this town!"). First, I'm going to go ahead and say that yes, these guys were pretty much covered in marshmallow fluff at this point in the film. Diamond already released marshmallow versions of these guys, though, so I'm actually happy they went with the decision to not go that route again. Anyways, while he's not covered with marshmallow, Winston Zeddemore does have a great, exuberant face. While I've always thought the hair was off on this Minimate, the facial expression does a great job of capturing Ernie Hudson. 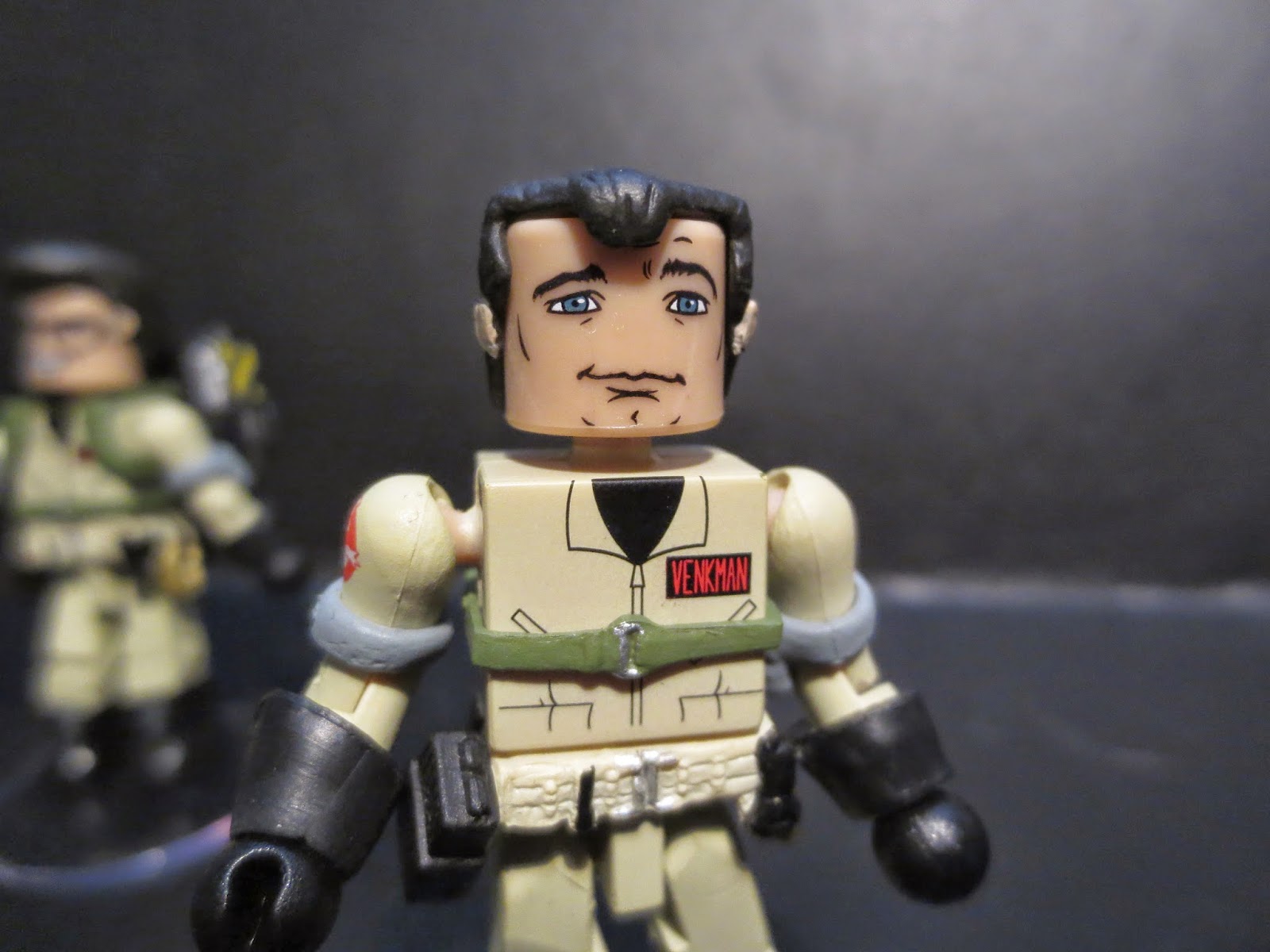 For someone with such an interesting variety of facial expressions, the Minimates figures have always done a wonderful job of capturing Bill Murray as Peter Venkman. Just look at that crooked grin and raised eyebrow: That's totally Murray!Interestingly, his bootlaces aren't painted on. Is this a mistake? Nope! While the rest of the other Ghostbusters tuck the legs of their jumpsuits into the tops of their boots, Peter doesn't. What a small detail that could have been easily overlooked! 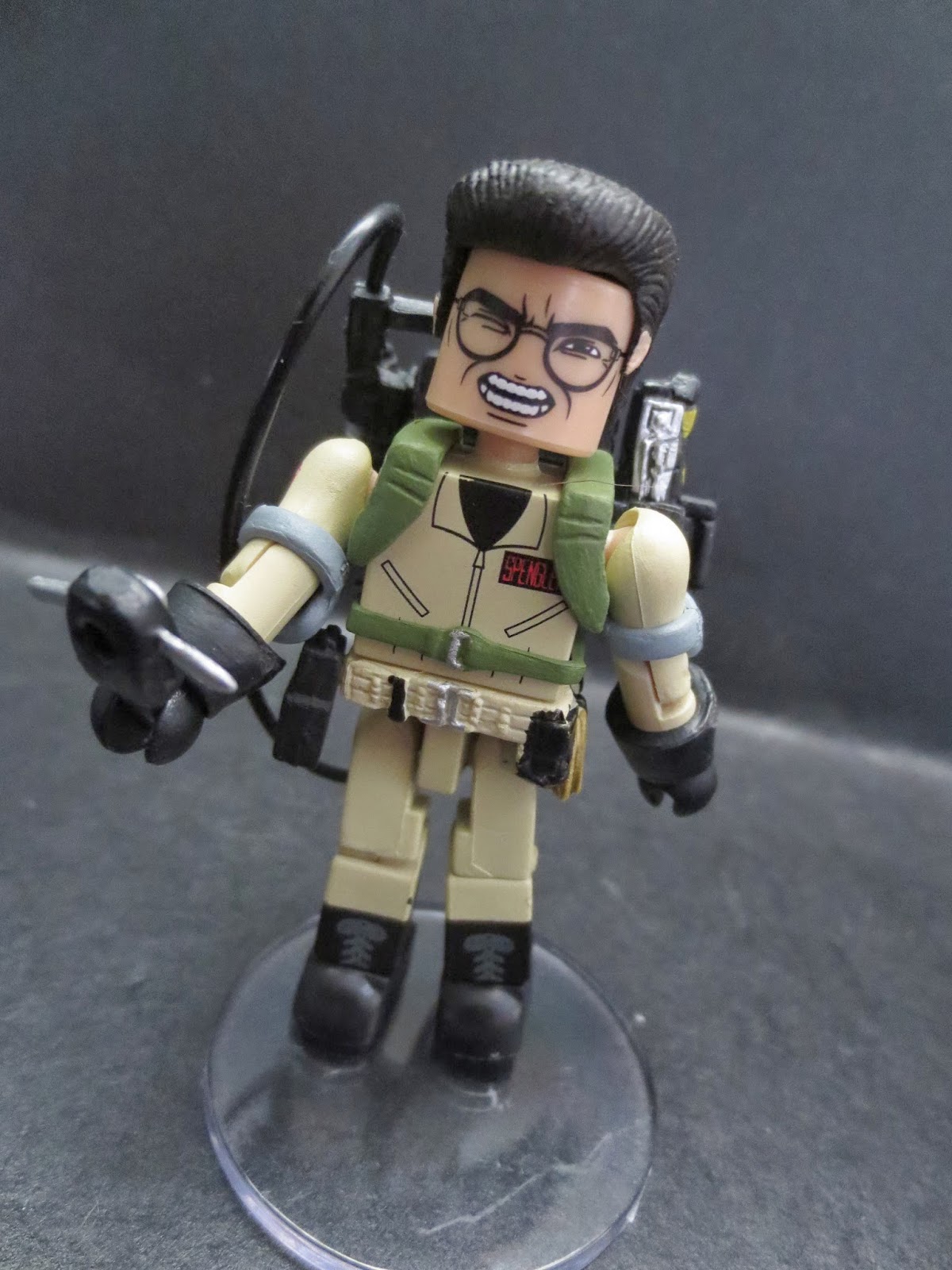 I love Egon's facial expression here. It's so...un-Egon. This looks like him either flinching from the glare of the Proton Pack or jumping at Walter Peck while screaming "Your Mother!" Darn, I miss Harold Ramis. I hope that if there is a Ghostbusters 3 that Sony doesn't try to replace other actors with these characters. I'd rather see a new generation of Ghostbusters with the background being the Ghostbusters either have too much work or have begun to franchise. 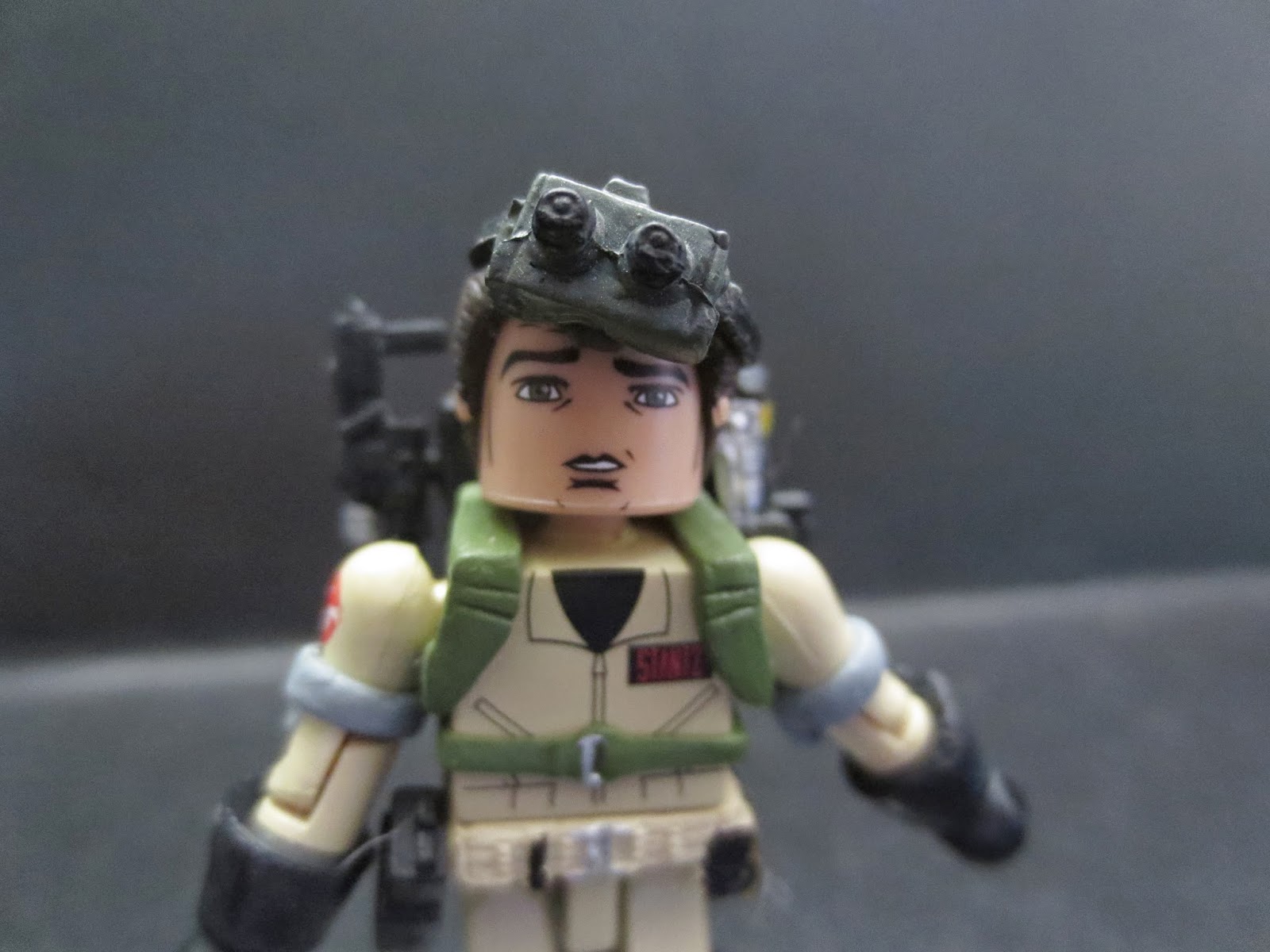 Last, but not least, it Ray Stantz, the heart of the Ghostbusters. Dan Aykroyd seems to be the toughest of the guys to capture in Minimate form. I like the concerned expression. This is either Ray realizing that he thought of the Stay Puft Marshmallow Man or him feeling self conscious after the battle on the rooftop when confronted by adoring crowds. 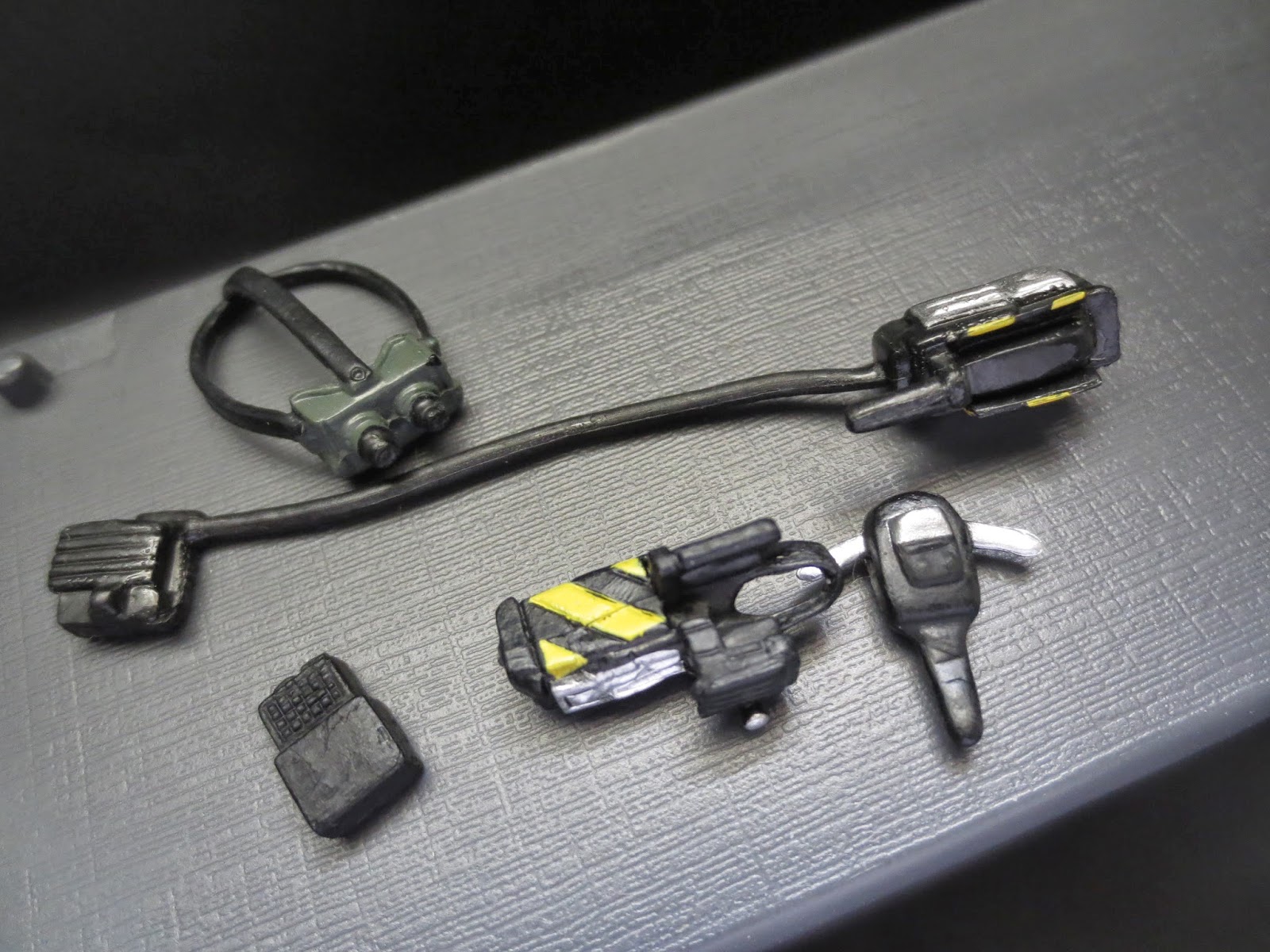 So, pretty nice figures. How about the accessories. One word. Amazing. This set is loaded with accessories, possibly everything you might want. While they are all reused from previous sets (other than the Proton Pack harnesses) they're still exactly what you need with your Ghostbusters. The set includes four walkie talkies that clip on to the belts, four Proton Packs with removable wands, four energy streams that clip onto the ends of the wands, four proton pack belts that fit over the torso, four Ecto Traps that stow on the Proton Packs, a PKE Meter for Egon, Ecto Goggles for Ray, an extended trap with foot pedal, two extra portraits (a screaming portrait for Peter and a calm portrait for Egon) and two marshmallow gunk hairpieces that any of the guys can wear in place of their hair. Oh, and four stands. That's.....27 accessories? Holy smokes. Diamond, you guys have outdone yourselves! 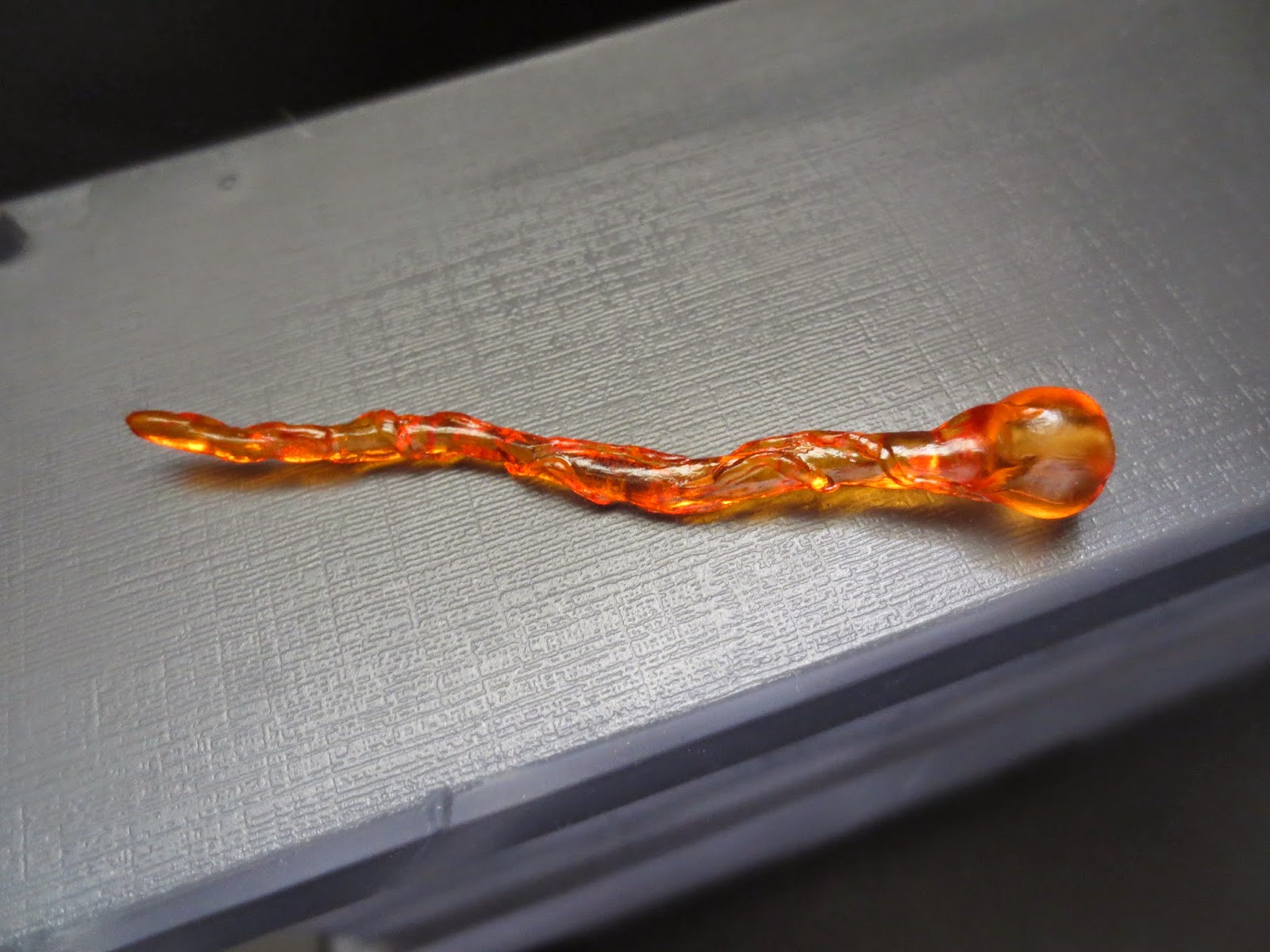 I love this set. I think my only real complaint is that the "No Ghost' logos on the shoulders just don't have the black outlining that makes them look clean and crisp like previous figures have had. Otherwise, I'm not sure you could ask for a better set of Minimates. For collectors who already have all of the previous releases like me, the fact that you get new heads and the ability to have removable Proton Packs is still a big deal. For someone just wanting a chance to have the four Ghostbusters on their shelves, this is a winning deal. I have no qualms about giving this set an Epic. It's truly impressive how much good stuff is included here. I really hope that this release, over two years after the last release, is a sign that Diamond and Art Asylum might be cranking this license back up again. That's great because I'd still buy them, particularly a Ghostbusters Janine, Oscar and his Phantom Nanny, the guys in their river of slime outfits, and Judge Wexler. Oh, and Peter's test subjects from the first film. And the hotel manager. And Ziggy ("Yo"!). Yeah, I'd be all over those. 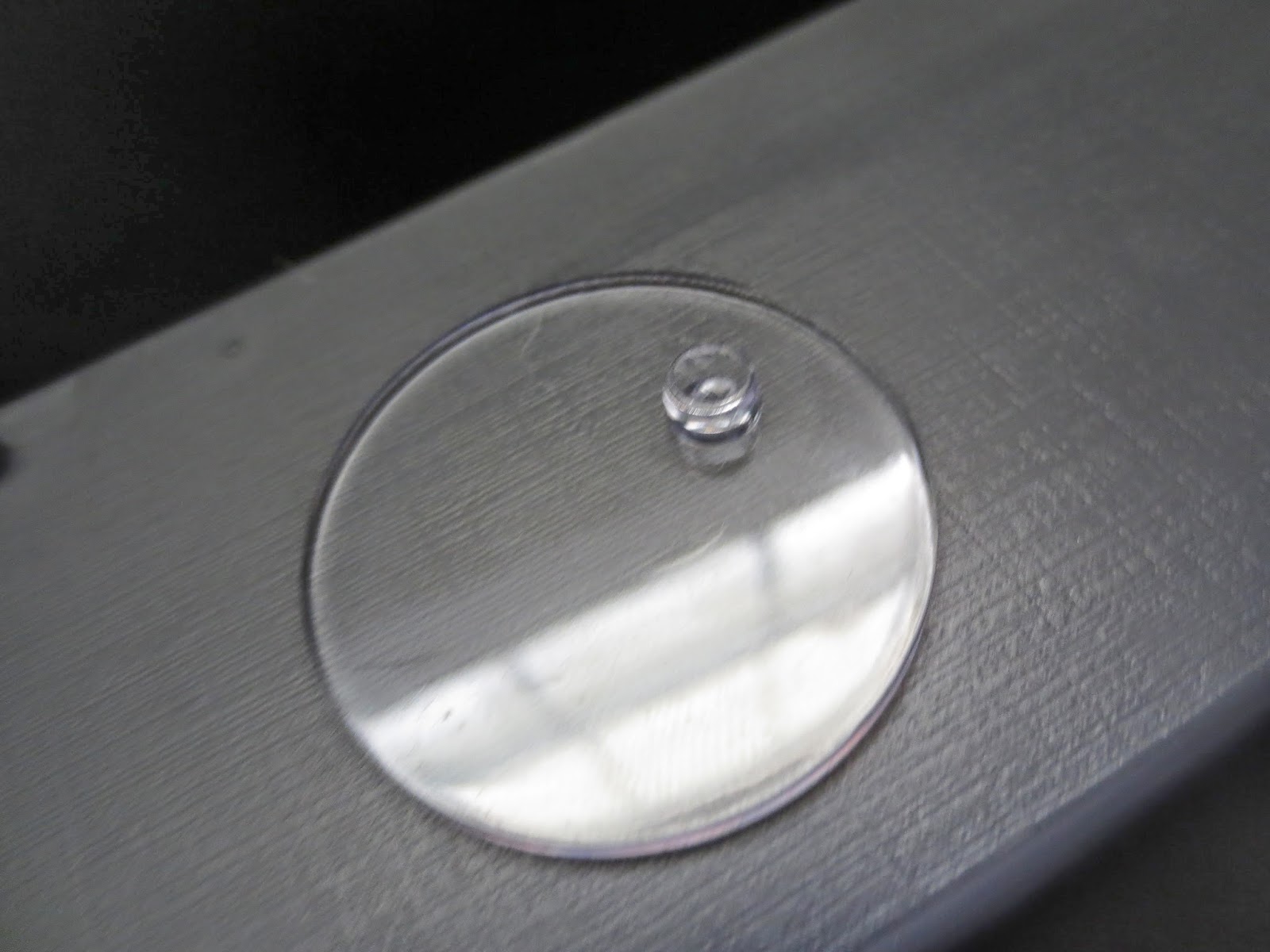 Want to get a set of these guys for yourself? They're back on preorder at Big Bad Toy Store and at Entertainment Earth after selling out the first time around. Check them out, along with our other Ghostbusters reviews: