Action Figure Review: Battle Lion from Masters of the Universe Classics by Mattel 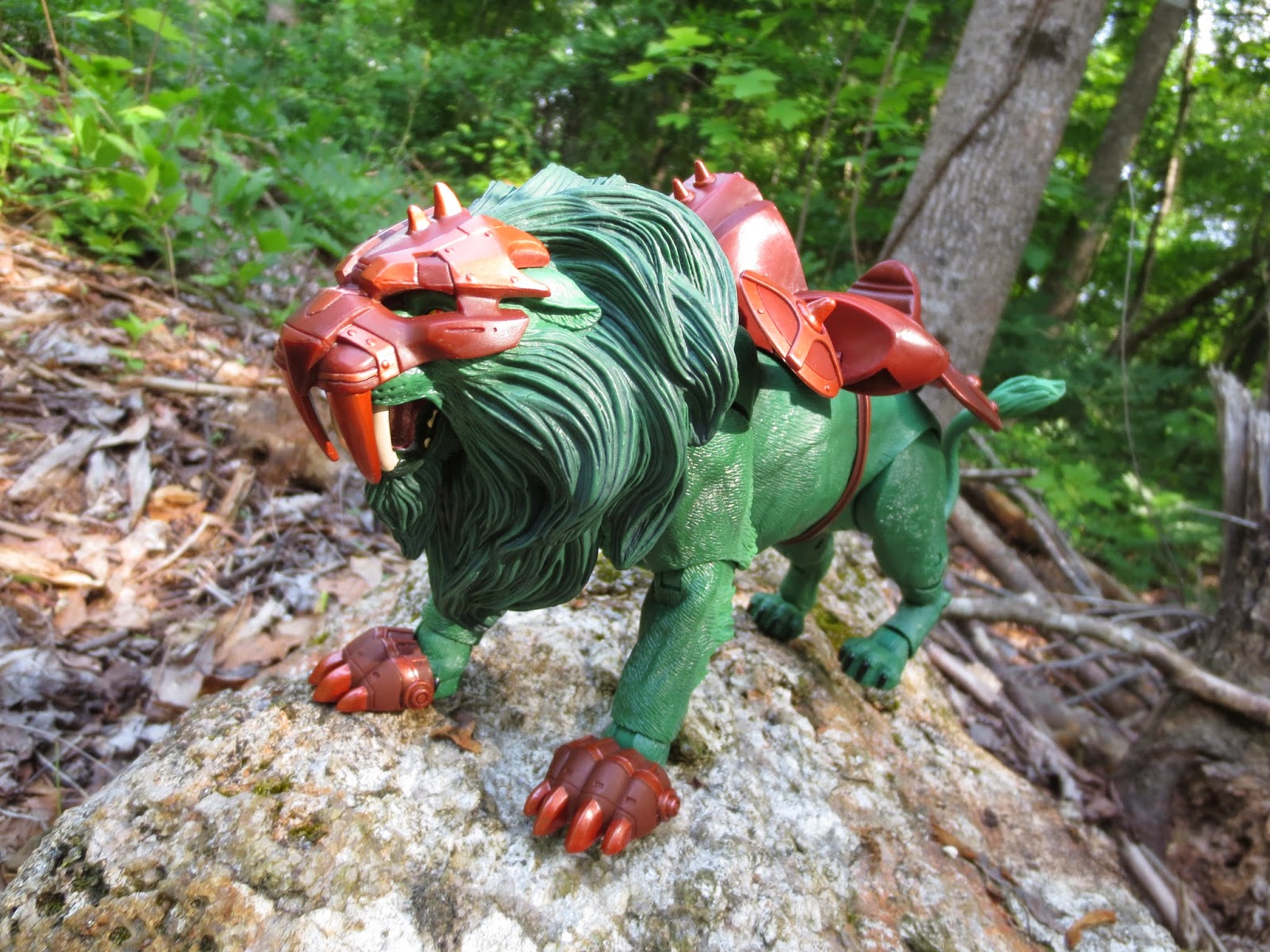 Why walk when you can ride? That's a great question and, fortunately for your King Grayskull figure, riding is now an option thanks to the introduction of Battle Lion into the Masters of the Universe Classics toyline! Appearing only in the season two episode of the Mike Young Productions He-Man and the Masters of the Universe "The Power of Grayskull", Battle Lion had a fairly small part in the series but seems to have left an impression on the fandom. For a few years many MOTU fans wanted to see King Grayskull and Battle Lion make it into the 200x toyline.  It may not be in time for the 200x line, but it's great to finally have both characters released in MOTUC.  For me personally, characters and figures from the ancient Preternian era/ Powers of Grayskull sub-line have been some of my favorites and I'm always glad to add a new figure to the mix. Read for a look at Battle Lion? Then join me after the break... 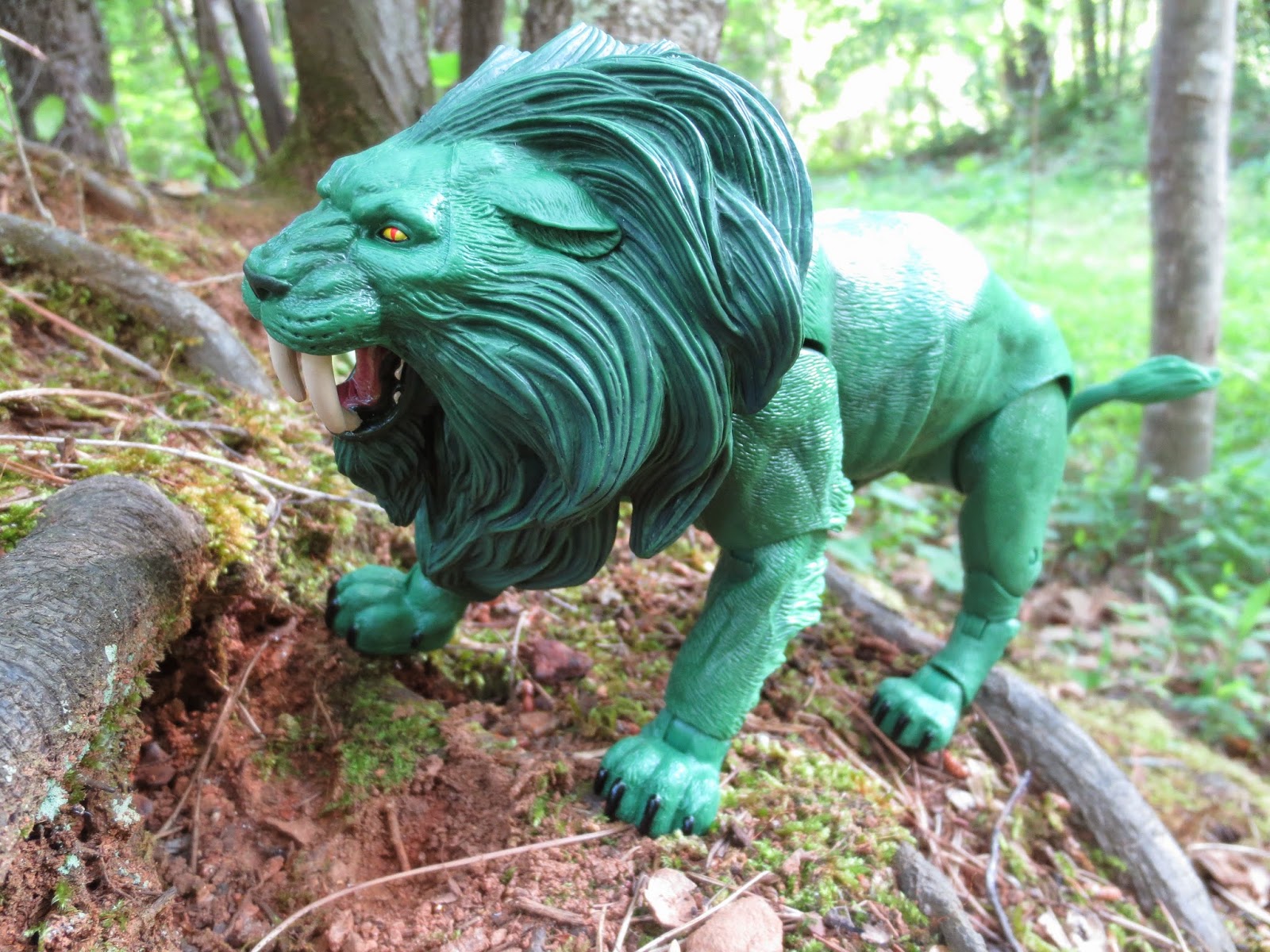 To a casual observer Battle Lion probably looks an awful lot like Battle Cat. I mean, they're both large green cats with red armor. That's not something you see everyday. Look a bit closer and you'll see the differences, however. While Battle Lion reuses much of the Battle Cat body (just like Panthor and the Griffin), he does feature a new head and a new tail in addition to his new armor and paint job. If you already have Battle Cat, you may not feel like there's much new here. Reuse is just the name of the game with MOTUC, though; if Mattel thought they could have gotten away with paining the Battle Cat body white with pink cotton balls for the mane and calling it Swiftwind, they would have. Interestingly, the bio on the back of the package says that Battle Lion is actually a giant lygor. Is this the first toy of Napoleon Dynamite's favorite animal? 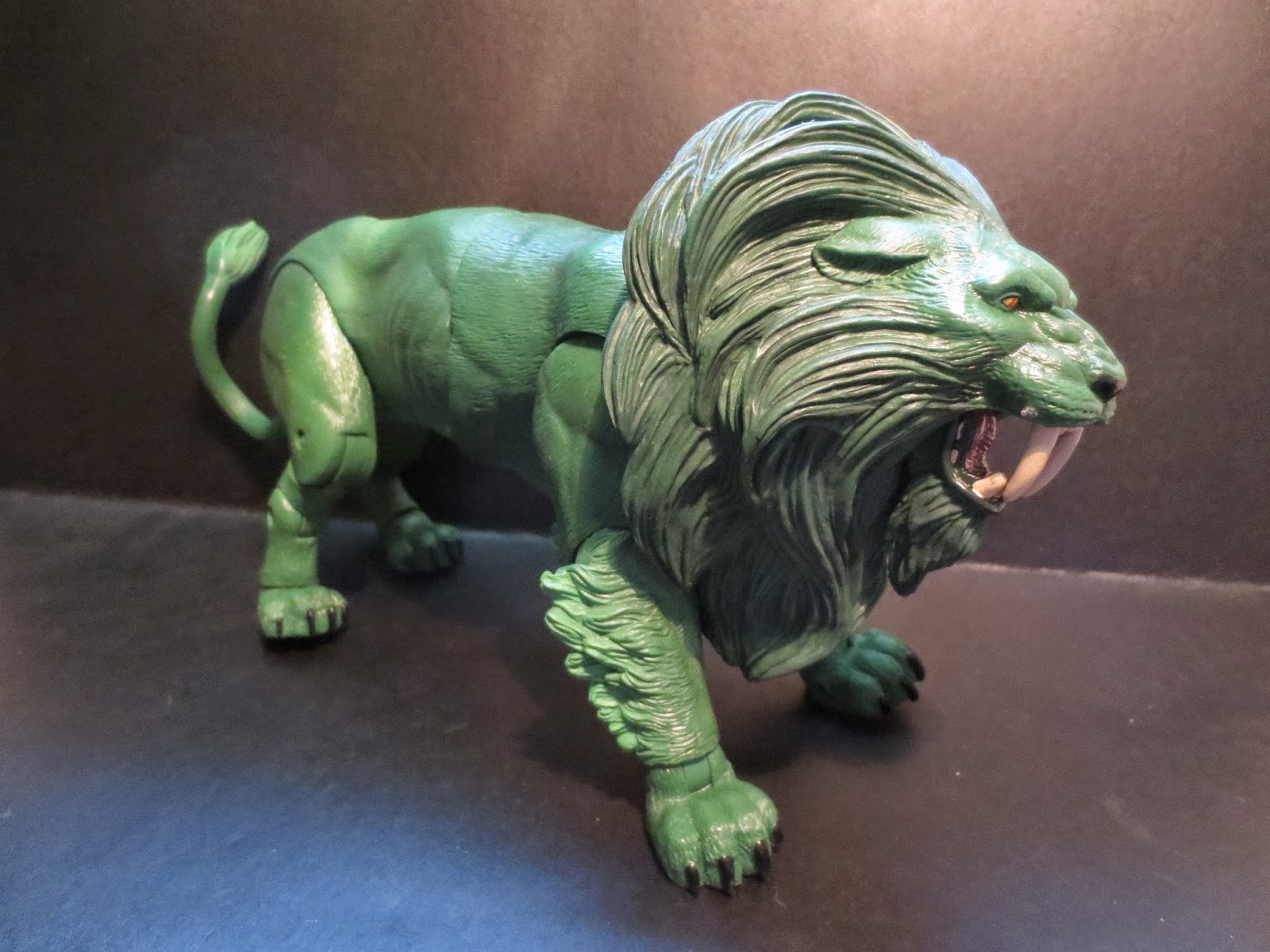 Battle Lion features the same articulation as the previous cats which is a mixed bag. He features: swivel/ hinge ankles, double hinged rear legs, swivel hinged front legs, swivel/hinge hips, a swivel/hinge tail, a ball jointed mid torso, a hinged neck, a swivel/hinge head, and a hinged jaw.  That's a decent amount of articulation but it's all as useful as it should be. First, many of the joints are fairly weak and loose. The double hinged rear legs don't always want to stay standing up straight. The "hips" on all four legs have a swivel/hinge system, but they really aren't designed to offer much lateral movement in giving Battle Lion any decent crouching poses. Lastly, particularly due to Battle Lion's huge mane, the head is pretty limited in movement. I'd love for Battle Lion to be able to look from side to side, but he is sadly unable to do so. The figure itself feels pretty sturdy, though. 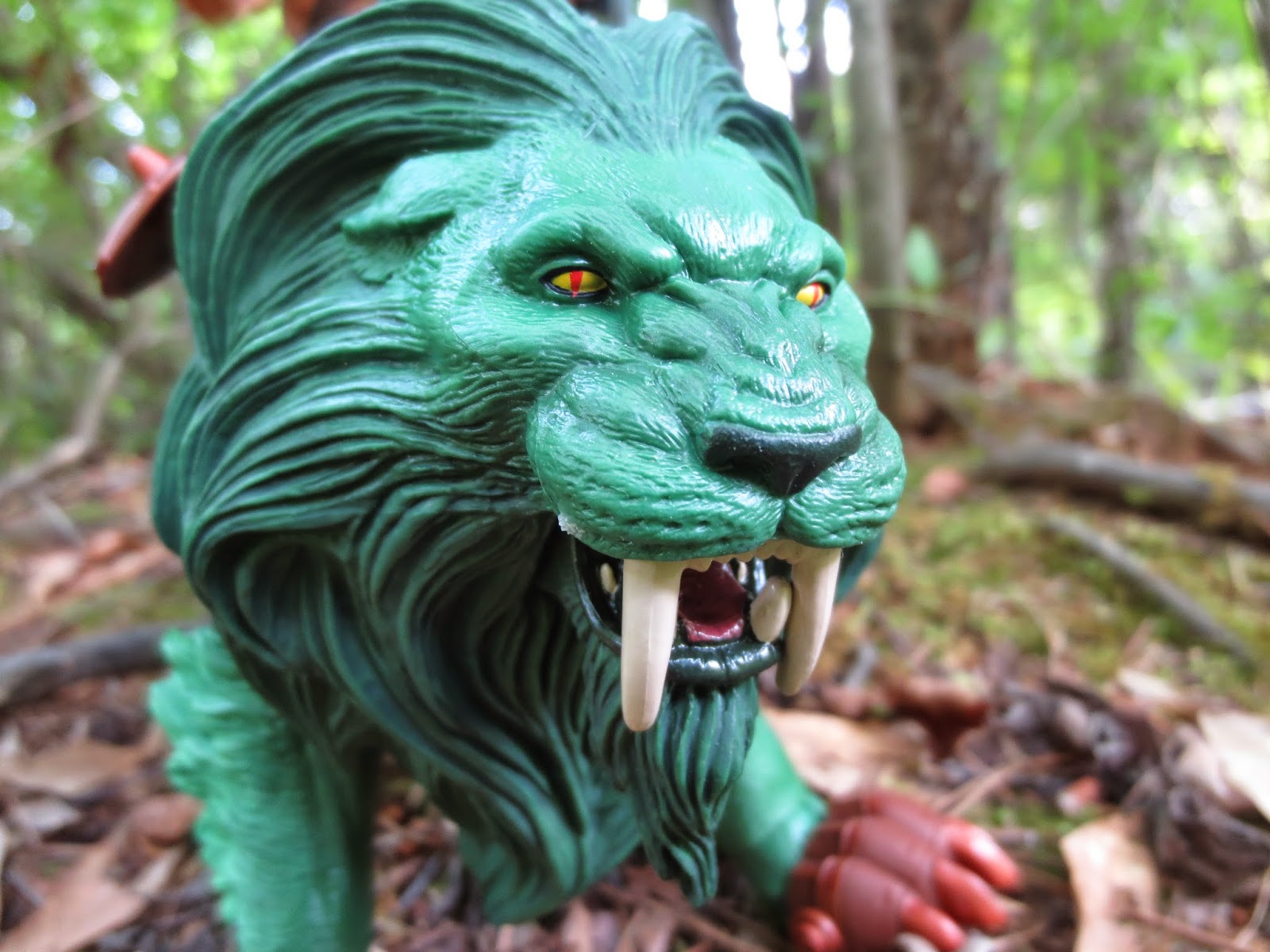 On to something positive: The sculpt looks great! The basic cat body is quite nice with subtle fur details, great paws with pads on the feet, and some nice work on the musculature and visible ribs. If you own Battle Cat, Panthor, or the Griffin, then you've already been able to appreciate these details. The new head and tail, however, are very. The articulation point on the tail is designed to rest differently than Battle Cat's; it's also longer and has a fluffy tip. The head sculpt is large, in charge, and ferocious! While you can see the family resemblance between Battle Cat and Battle Lion, Battle Lion's gigantic mane really makes him look like either a truly barbaric steed or a member of the Siegfried and Roy show. I'm loving how vicious he looks with the opening jaw. 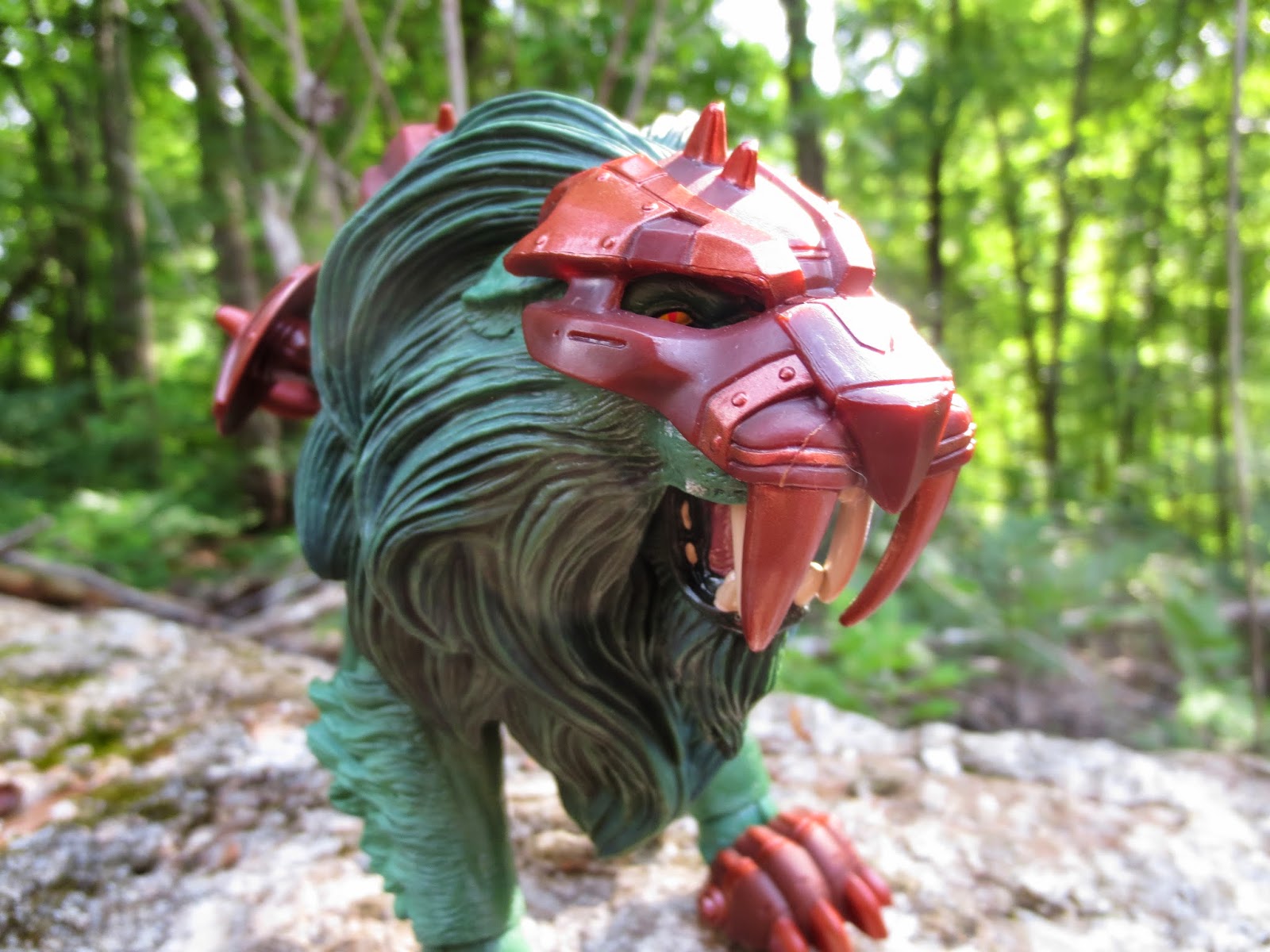 While Battle Lion is all green and lacking the yellow stripes of Battle Cat, that doesn't mean he doesn't have an impressive paint job. While his main body is cast in a deep, pleasant green, the scruffy edges of his fur on his belly and legs are much lighter. This is a neat detail that was present on Battle Cat and I'm glad to see it return here. The head is fantastic with a deeper, almost forest green main with a nice dark. The mouth, teeth, and eyes are all neat and cleanly applied. A closer look at the figure even reveals that Mattel painted the pads of Battle Lion's feet. 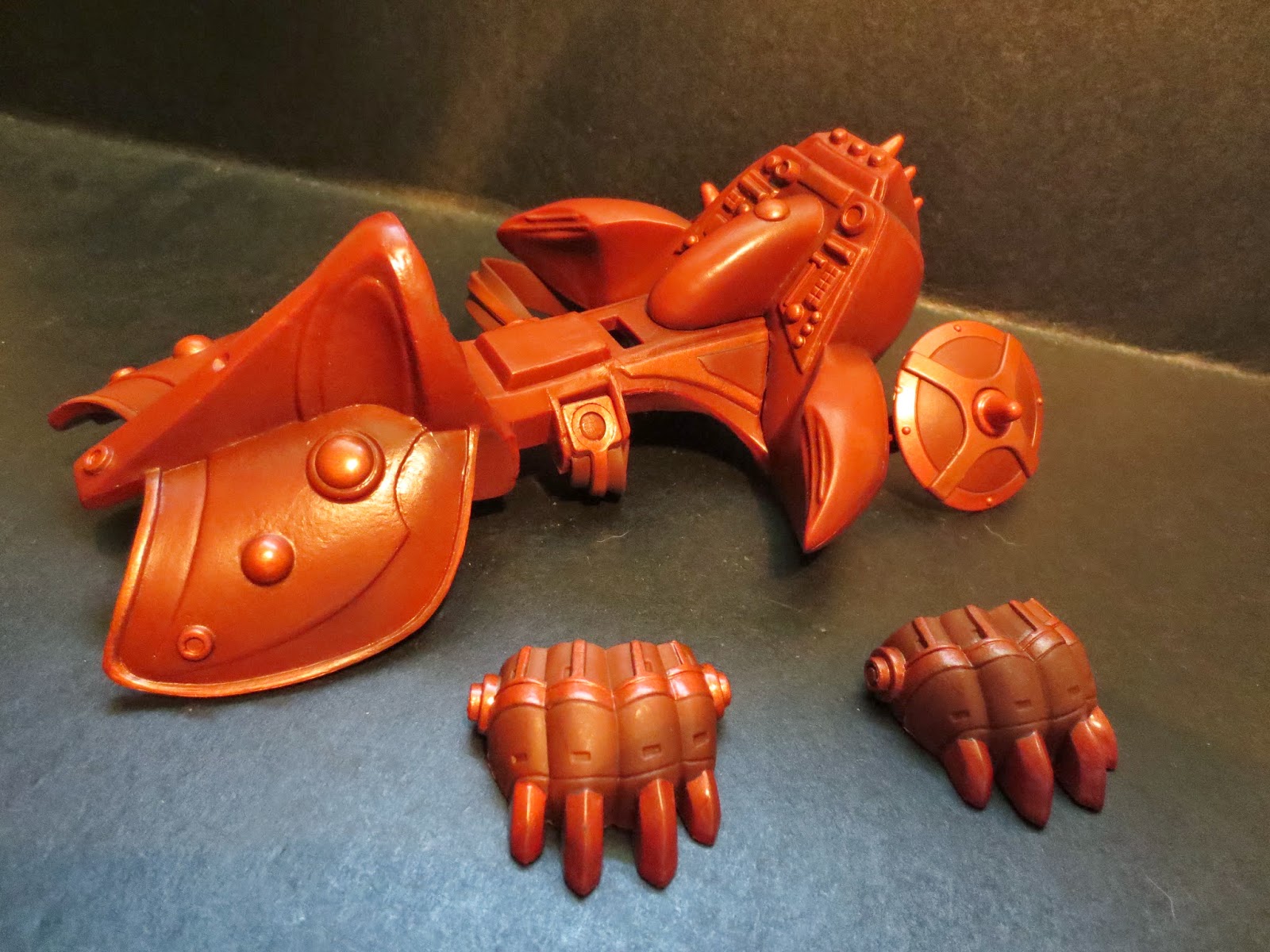 Battle Lion's armor pieces are removable, so I'm counting them as accessories. The armor is quite true to Battle Lion's cartoon appearance and also is quite close to the armor Battle Cat wore in the 200x toyline. Included are two pieces of armor for the front paws, a harness/saddle, and a mask. The two armored paw guards snugly fasten over Battle Lion' front paws and help to make his claws look even more intimidating. They fit on his back paws as well, so if you happen to have access to two Battle Lions you could really trick one of the figures out. 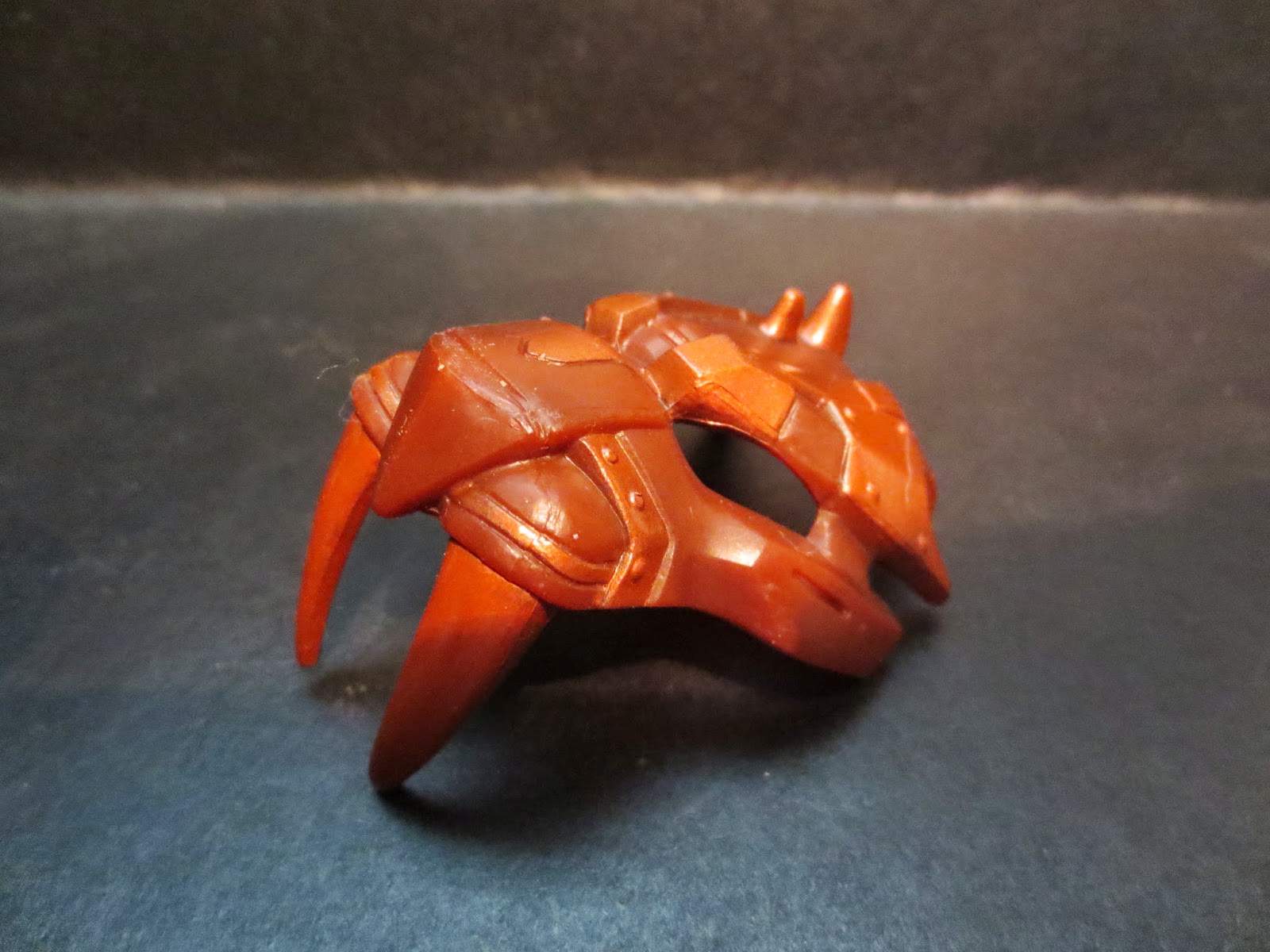 The mask fits snugly over Battle Lion's face and looks great. It looks less technologically enhanced than the other armor pieces, though (although I'm cool with that). Lastly is the harness which holds the saddle for King Grayskull to ride on. It has a soft, flexible belt that can fasten around Battle Lion's torso. The front of the armor has three spikes that protrude above Battle Lion's head and the two rounded discs that seem to offer some sort of shoulder protection. I'm not quite sure of their purpose but they are removable, oddly enough. The actual saddle does not look comfortable at all but it does have an unusual amount of dials, levers, and knobs on the front of it. What these do, I have no clue. While the saddles are molded in a nice deep red with some black highlights, the little details are given a lighter, metallic paint job. It's a really nice look. 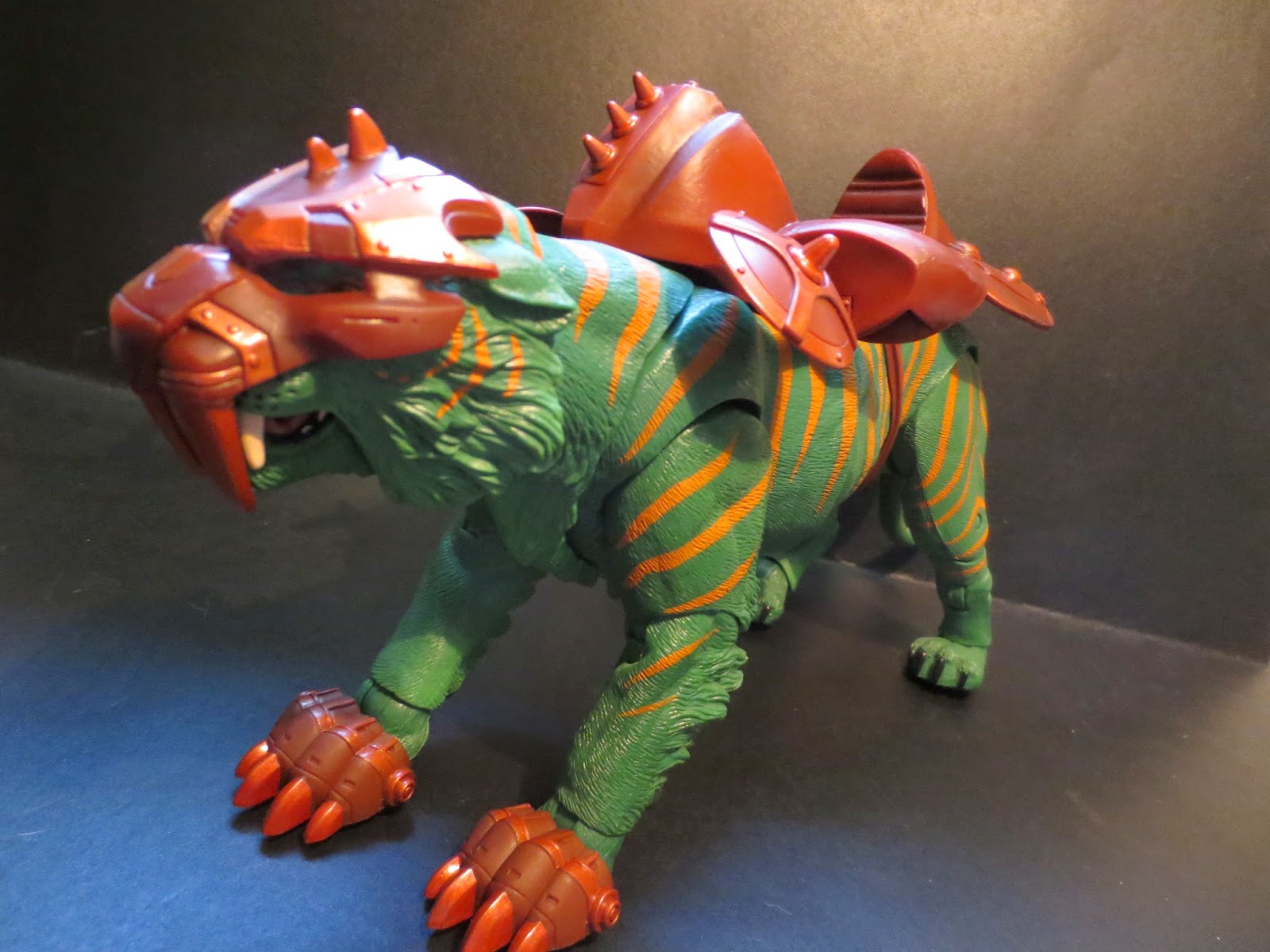 Fans of the 200x series will be happy to know that all of these pieces of armor can easily fit onto Battle Cat to make a 200x styled Battle Cat! 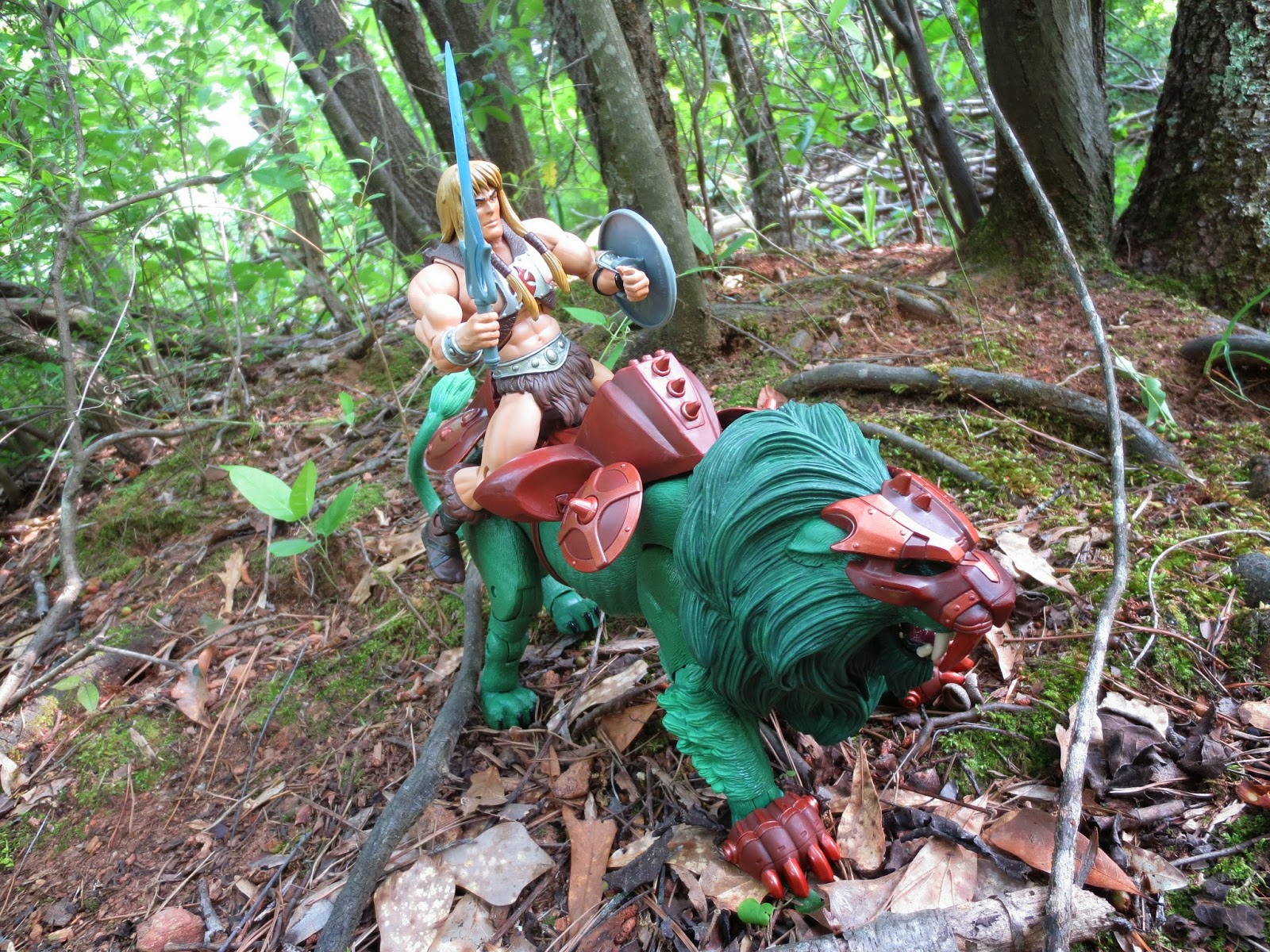 Of course, what good is a Battle Cat or Batle Lion if you can't ride him? I wanted to take a second and talk about how figures sit on this guy. Unlike with He-Man, the saddle isn't contoured or anything to really hold the figure on tightly. King Grayskull ca sit on here, but he does so fairly loosely. Since King Grayskull has a longer loincloth than your average MOTUC figure, Mattel put a little slot into the base of the saddle to accommodate it. I'm not sure how necessary this was, but it's an appreciated gesture. 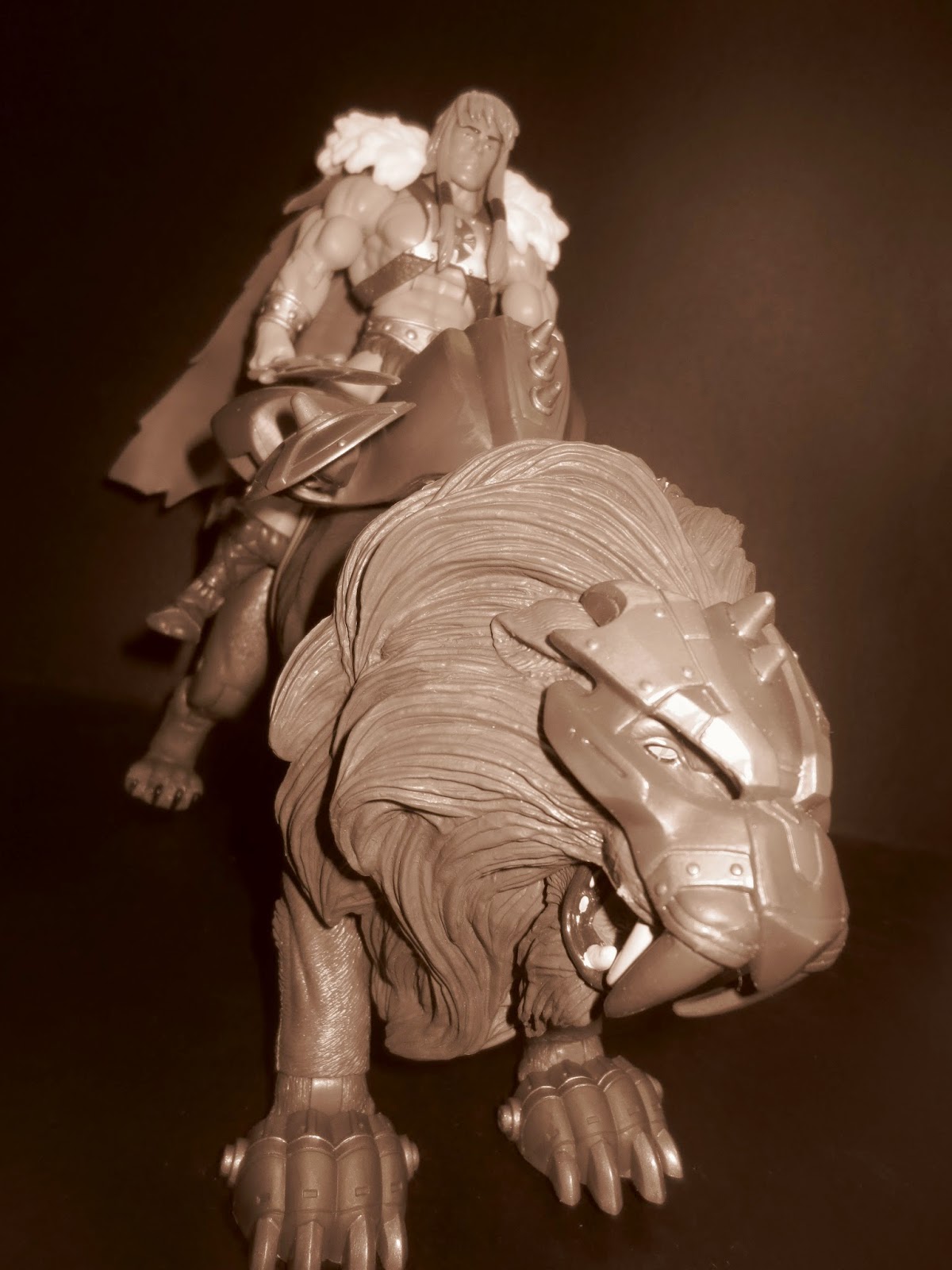 So, how does Battle Lion fare? I love his inclusion in the lion and definitely appreciate the sculpt, the paint job, and the sculpt and detail on the accessories. I've always had some issues with the basic cat body in MOTUC, so that's nothing new, but I don't think the saddle is secure enough to really hold a figure well. A bit better design and perhaps a higher back or something might have really helped. While MOTUC reuses bodies over and over, there's something about the reuse here that just doesn't feel as fresh as other figures or beasts in the line. I'm glad to have Battle Lion, but he's definitely not a figure that will set the collecting community on fire. Overall, he's a Good and a half figure. Completests, fans of the Powers of Grayskull subset, and fans of the 200x era will go nuts, but other fans who didn't subscribe may not feel they need to track this guy down. 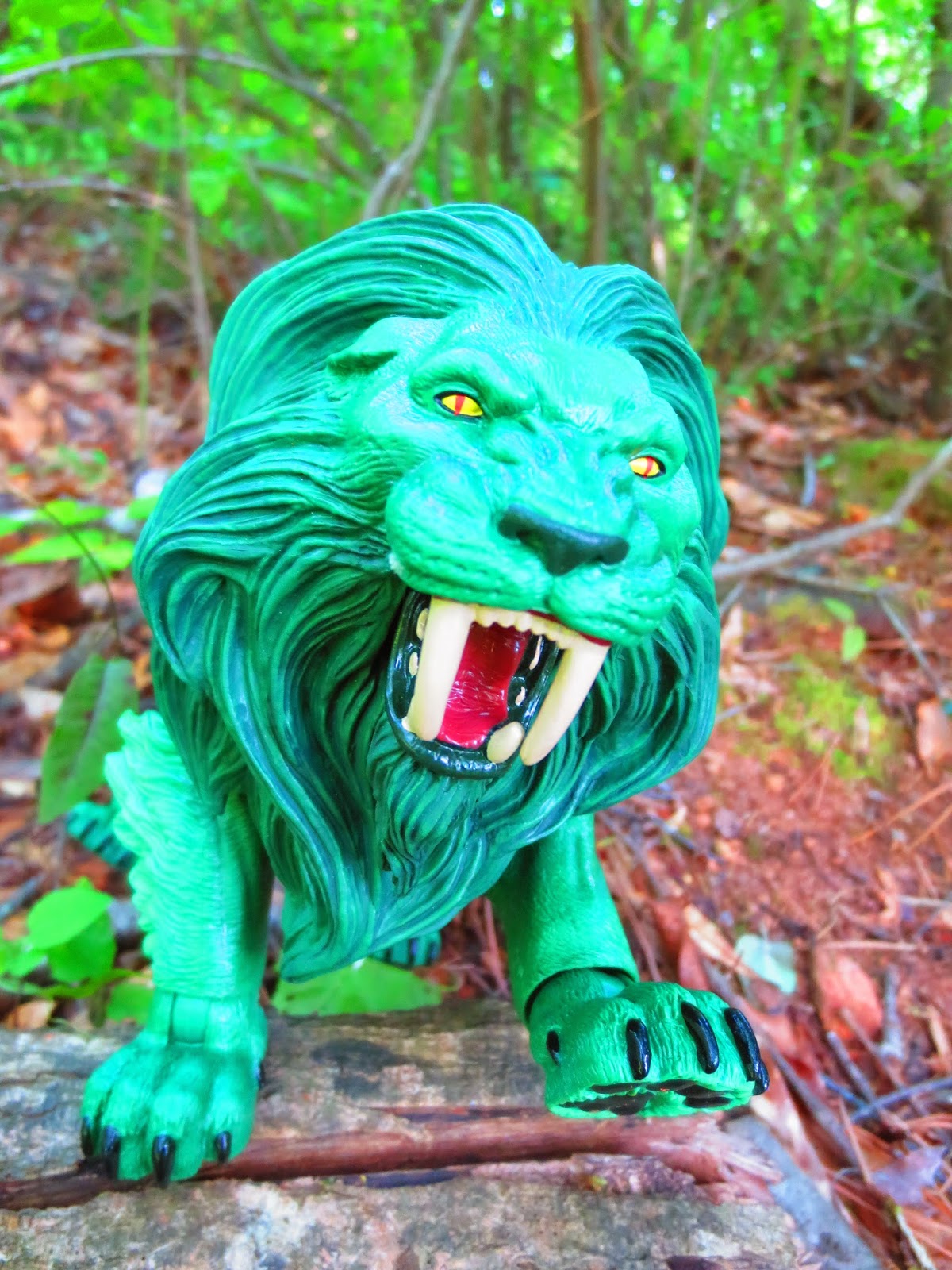 Want a Battle Lion of your own? Head on over to Big Bad Toy Store and snap one up while you still can! Also, check out our other MOTUC reviews here at ThEpic Review: