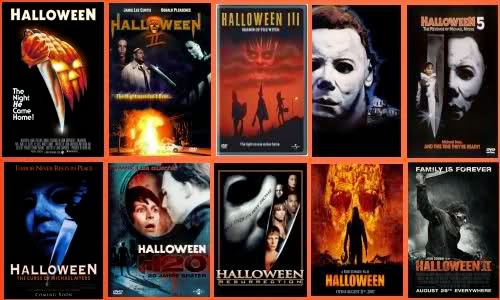 Anchor Bay and Shout Factory are finally ready to release the Halloween box-set gore hounds every where have been waiting for.  On September 23rd two different blu-ray box sets will be released one retailing at $130 and the other at $170 that includes the producers cut of the Curse of Michael Myers.  Checkout the press release after the break to get all the fine details on the two releases after the break....


The following is an excerpt of the press release from
Anchor Bay and Shout Factory detailing the two sets:
"THE ONE THAT STARTED IT ALL…
ANCHOR BAY ENTERTAINMENT
AND SCREAM FACTORY™,
IN AN UNPRECEDENTED PARTNERSHIP,
PROUDLY UNVEIL
HALLOWEEN THE COMPLETE COLLECTION
BLU-RAY™ BOX SETS
Limited Edition 15-Disc Deluxe and 10-Disc Edition Brings Together ALL The HalloweenFeature Films In One Massive Set For the First Time EVER; All-New Bonus Features, Collectible Packaging, and 40-Page Book Make This THE Blu-ray™ Box Set Event of 2014!
Michael is Coming Home September 23rd
BEVERLY HILLS, CA – Last year, the horror classic Halloween celebrated 35 years of terror for those willing to partake in its vision of unrelenting horror. But that was only the beginning of the celebration. What producers Moustapha Akkad, Debra Hill and Irwin Yablans, writer/director John Carpenter and stars Jamie Lee Curtis & Donald Pleasence started in 1978 has transformed into one of the most durable, iconic – and copiously studied — horror film franchises ever created. Before Jason, before Freddy, and before Jigsaw, there was…Michael.  Over the years, audiences have lived and relived the terrors of Michael Myers through ten feature films, as well as various re-edits and alternate versions. Yet to date, the complete saga of Michael Myers could only be told in pieces, in individual DVD and Blu-ray™ releases, with the rights spread across multiple home entertainment studios.
Until now…
Through the unprecedented collaboration of rival home entertainment companies Anchor Bay Entertainment and Scream Factory – the leading purveyors in horror home entertainment –Halloween The Complete Collection Blu-ray™ box sets arrive September 23rd.
For the legions of Halloween fans, the Deluxe Edition boasts 15 discs and contains all theHalloween feature films – Halloween, Halloween II, Halloween III: Season of the Witch, Halloween 4: The Return of Michael Myers, Halloween 5: The Revenge of Michael Myers, Halloween: The Curse of Michael Myers, Halloween H20, Halloween: Resurrection, Rob Zombie’s Halloween and Halloween II.  The set includes the NEVER BEFORE RELEASED producers cut of Halloween: The Curse of Michael Myers as well as the ultra-rare network TV version of the original Halloween, the network TV version of Halloween II,  plus the unrated versions of Rob Zombie’s Halloween andHalloween II.  It is packed with hours of BRAND NEW bonus features including new interviews with cast and crew from the entire franchise!  In response to years of fan feedback, the first Halloweenwill now also include the original mono audio track and the set will include both versions of the original Halloween-the original Blu-ray™ release and the recently remastered 35th Anniversaryversion with the mono track added back in!  It also comes with a limited edition 40-page book written by Michael Gingold of Fangoria Magazine.  The collectible packaging will include a newly commissioned illustration on the outer case and each film will be in its own black Blu-ray™ case with the original theatrical one sheet as the key art. This deluxe set carries an SRP of $169.99.
“This compilation is the ultimate collector's item for fans of the Halloween films and a testament to all the wonderful talent that have worked on them,” remarked Malek Akkad, President of Trancas International Films and son of series producer Moustapha Akkad.  “The partnership between Anchor Bay Entertainment and Scream Factory to present fans for the first time with all the Halloween films in one definitive package is a tribute to everyone – including my father – who made these films the terrifying classics they are today.”
The 10-disc Edition includes the original theatrical versions of the Halloween films and will include select bonus features.  SRP is $129.99.
Both sets pre-book August 27 and will be distributed by Anchor Bay Entertainment with bonus features developed and created by Scream Factory and Anchor Bay.
Artwork and bonus features to be announced in the next couple of months." 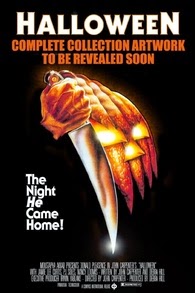 So there you have it while this likely won't mean anything to a casual Myers fan who has most of the films on blu-ray already and who would be unwilling to shell out $170 just for a Fangoria book and new artwork.  But if you are die hard Halloween fan this day has to be up there with the night he came home!