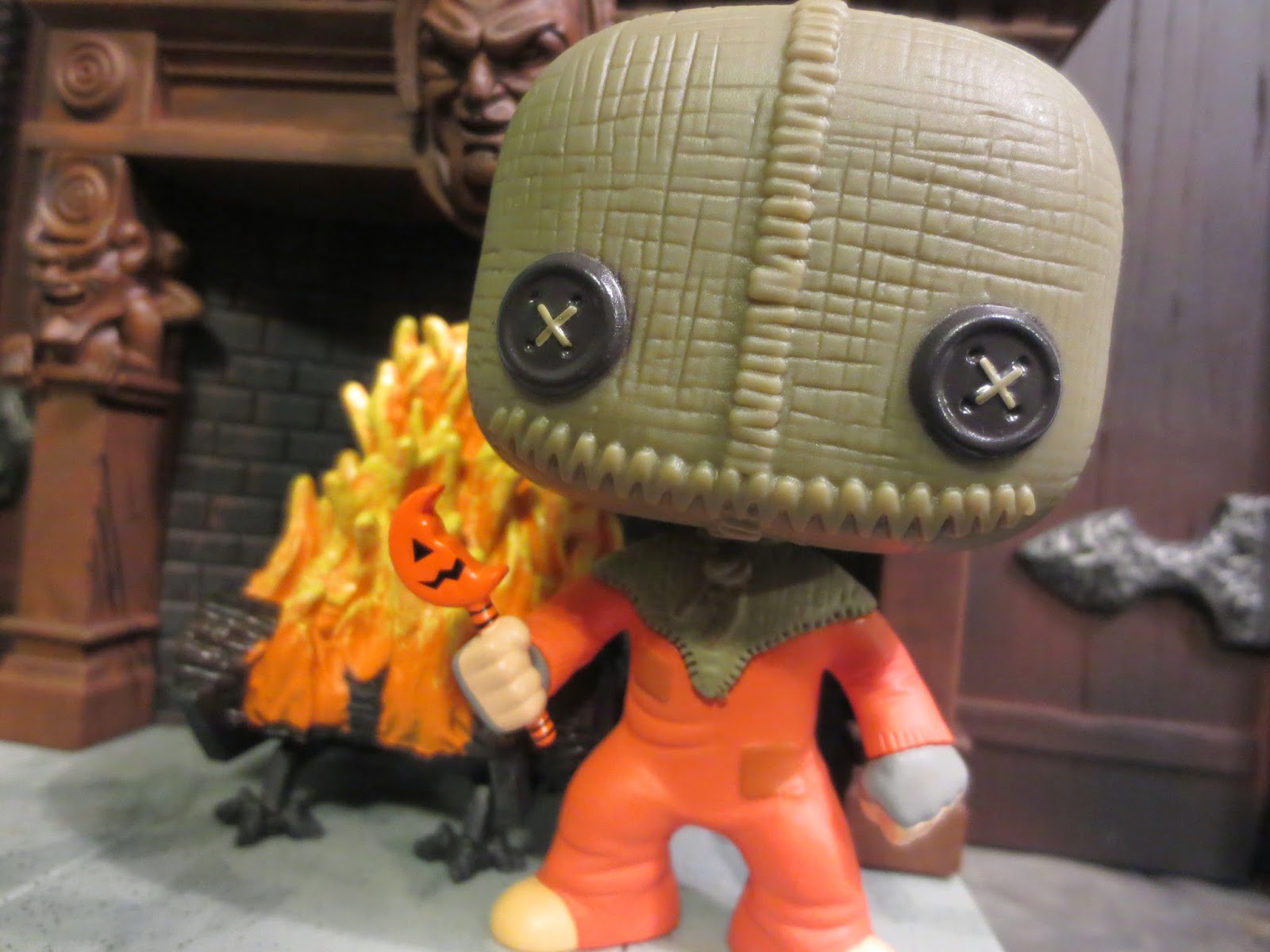 When you look at how many characters from a huge number of diverse properties that Funko has released in their POP! line, it's really quite impressive! To think that there are collectors who can have a display of hundreds of characters from multiple properties in one similar style is rather impressive, even to a more traditional action figure collector like myself. The only Pop! Vinyl figure I owned prior to this review was Batgirl (since I collect everything Batgirl related that I can get my hands on), but when I saw that Sam from Trick 'r Treat was available, I just had to have him. If you're not familiar with Trick 'r Treat, you need to check it out. It's a 2007 horror anthology written and directed by Michael Dougherty that features an excellent cast (including Brian Cox, Anna Paquin, Leslie Bibb, and Dylan Baker) and an incomparable atmosphere. I love both Halloween and horror movies and Trick 'r Treat stands alongside John Carpenter's Halloween as a perfect blend of the two. It's a film that was so incredibly fresh when it was released and yet it managed to feel like a special holiday movie that you watch every year on the holiday. I've shown it to both horror fans and non-horror fans and all have equally enjoyed it. Today's review is of Pop! vinyl's rendition of the film's primary antagonist/ protagonist Sam, played by Quinn Lord, who is the embodiment of Samhain and the enforcer of the rules of Halloween. Sometimes depicted as an impish, childlike figure, Sam can really go from treats to tricks when he learns of someone ignoring the agent traditions that are to be observed on Halloween night. Ready for a look at this fun vinyl? Then grab some candy, put on a costume, and join me after the break... 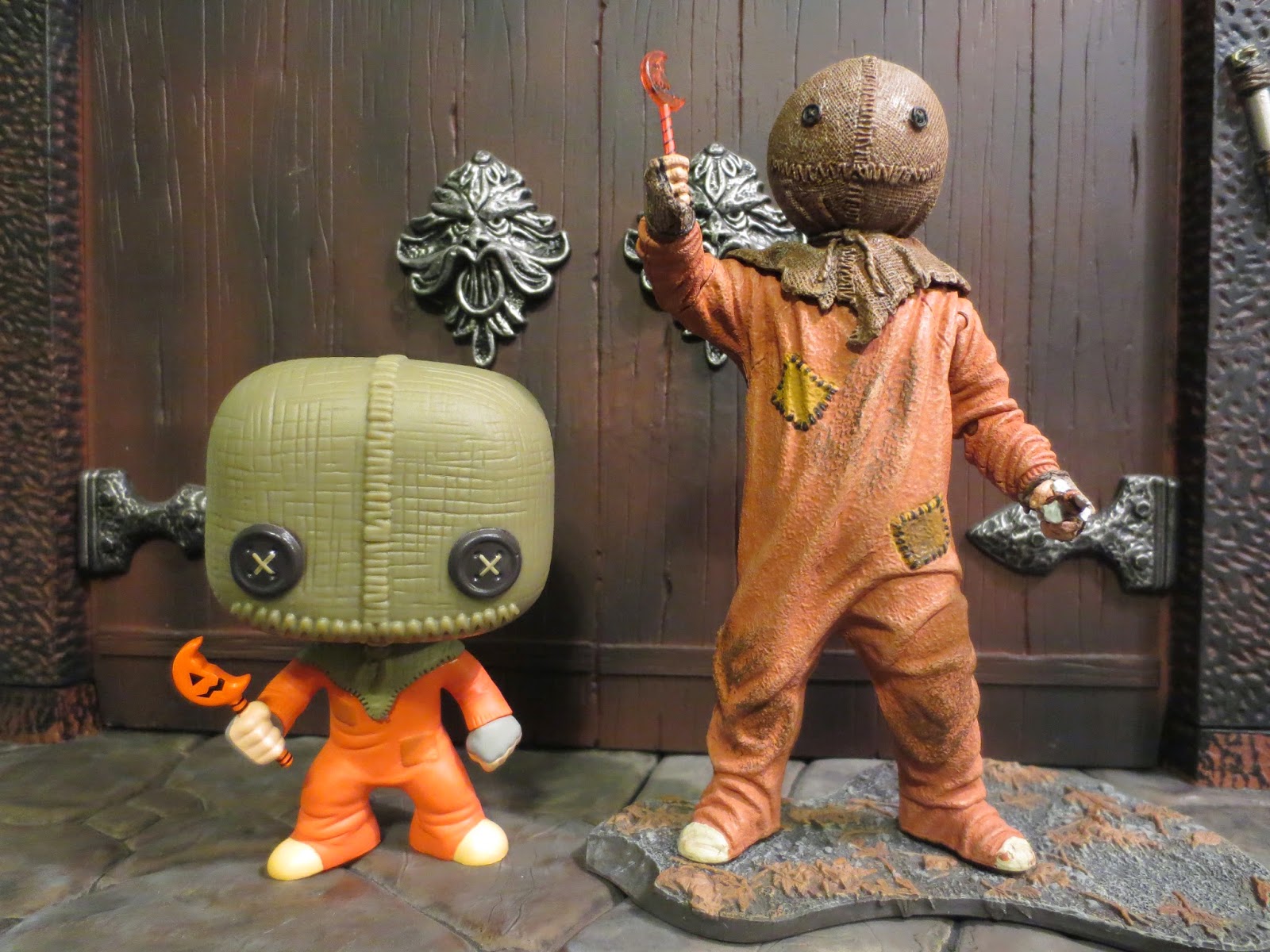 Sam stands between 3 1/2 and 3 3/4 inches tall. The style design for the POP! vinyl figure is chibi influenced, so expect a smaller body and a larger head with simple features. While most of the POP! vinyl figures have small, simple eyes, Sam has the button eyes that are sewn onto the burlap sack he wears for his costume. He is listed as figure number #57 in the Pop! Movies series. 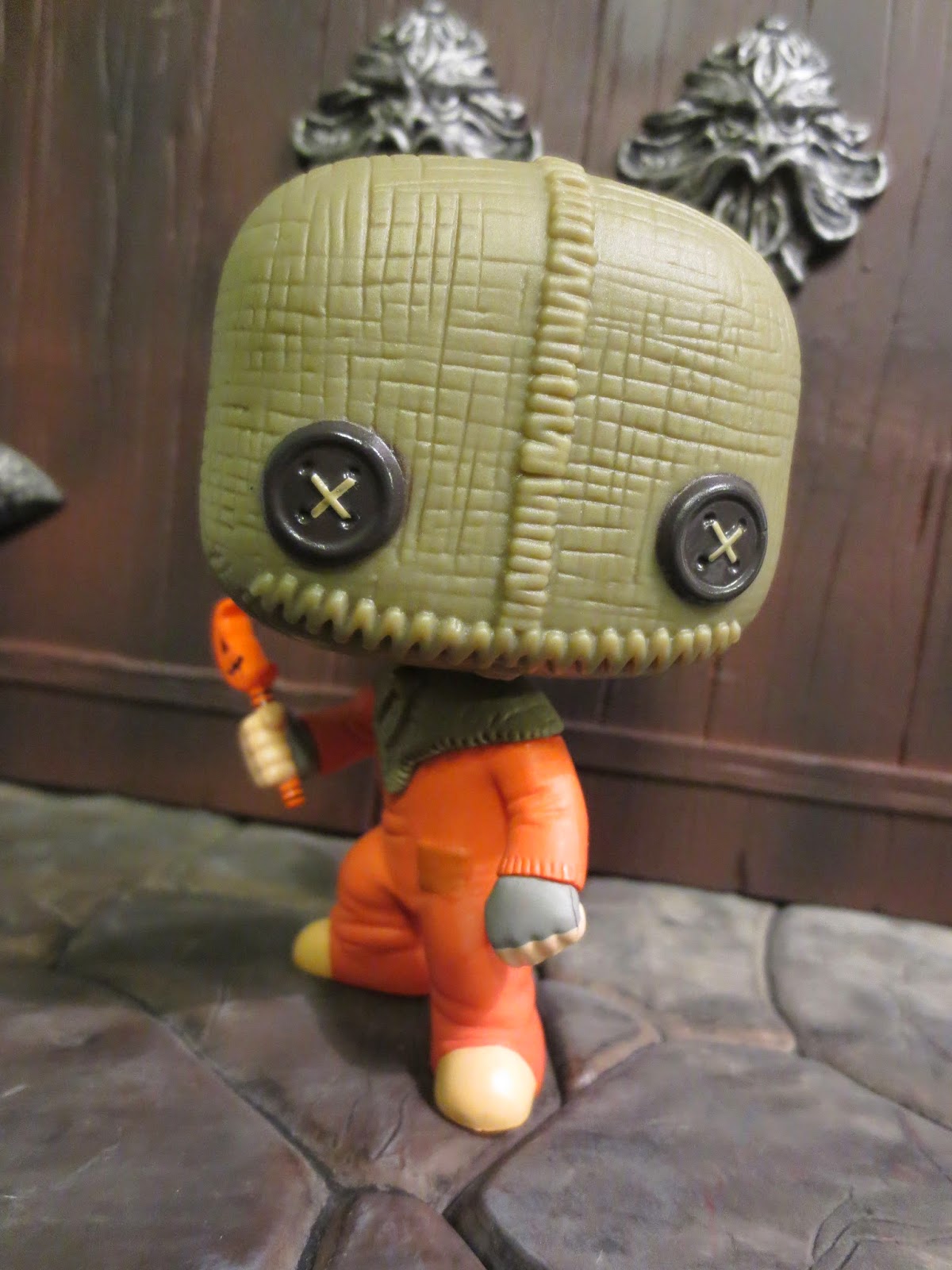 The POP! figures don't have much articulation; only a swivel neck. These are really more collectible pieces or desk decorations than true toys, but having the swivel neck does allow for a little bit of personality in how you pose Sam. The larger head is made of a softer vinyl material while the body is made from a harder plastic, but due to the excellent engineering and design, balance is not a problem. 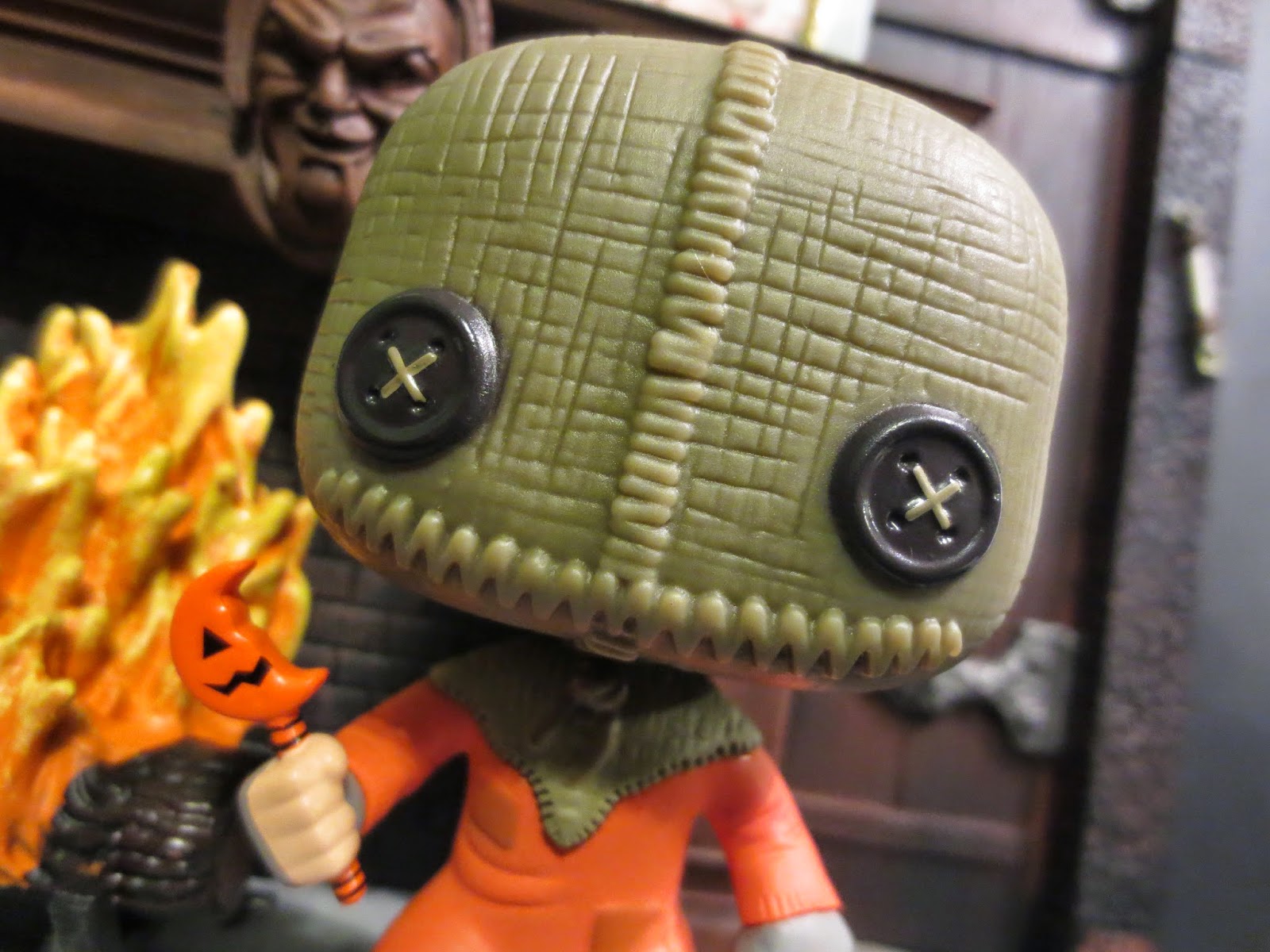 While the FunKo POP! toys are rather stylized, that doesn't mean they don't have some nice sculpted details. Sam's head has a nice burlap-like texture to it with visible seams and, of course, his two button eyes.  There are two little patches sculpted on his outfit as well as a flap in the pack of his outfit (like the kind on old long underwear). The coolest detail, however, is the little pumpkin lollipop that Sam is holding in his right hand. Not only does this look great, but it's a significant part of the movie as well. I have no real complaints about the sculpt, although I do wish that he had been sculpted with his trick 'r treat bag. I always feel like that's more than just a prop; it's a part of his character. 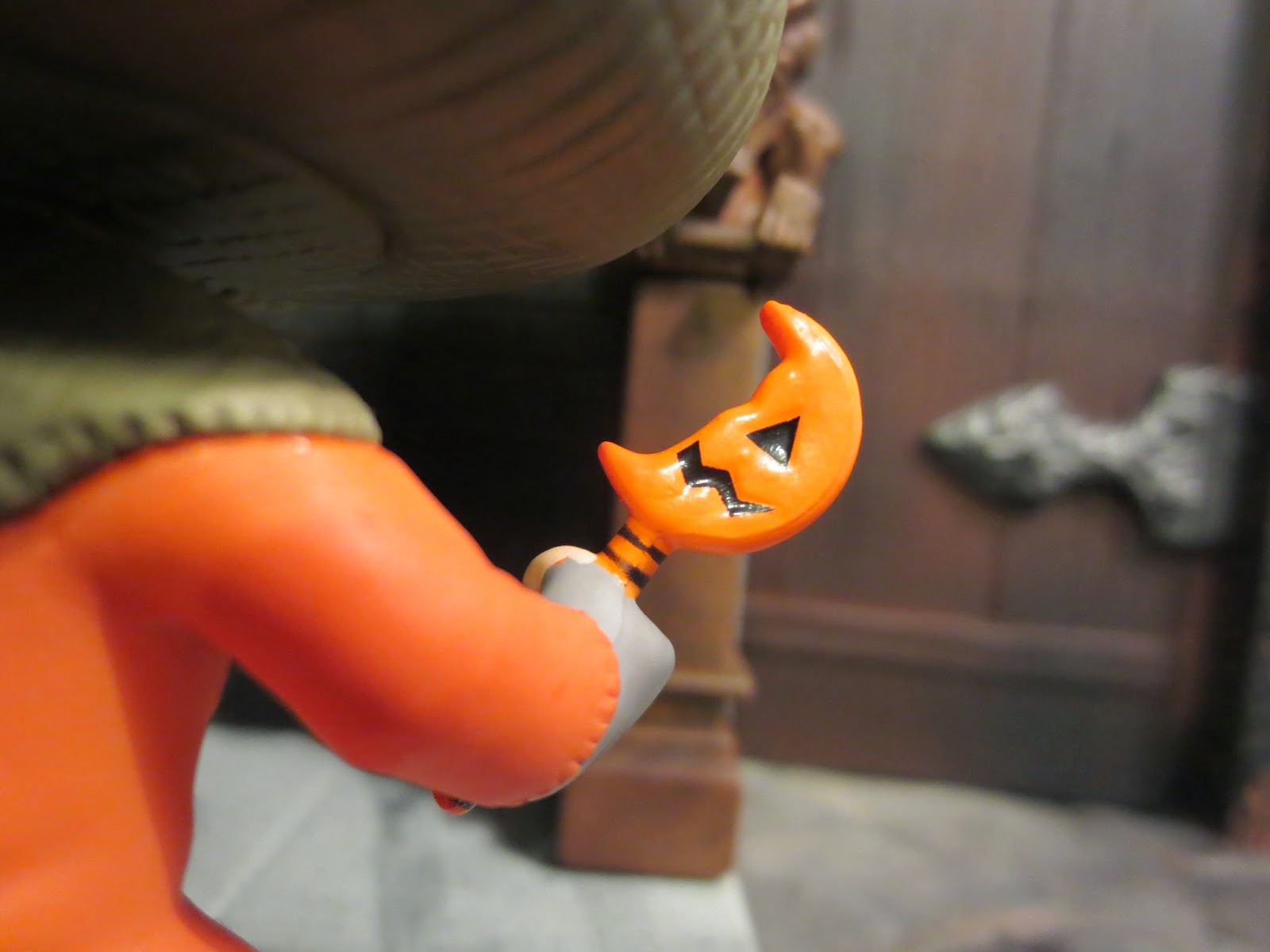 The paint work is nice, clean, and simple with lots of brown and orange. The fall colors not only match Sam's movie appearance but also instantly make you think of Halloween. I really love how bright and colorful Funko made Sam's pumpkin lollipop! 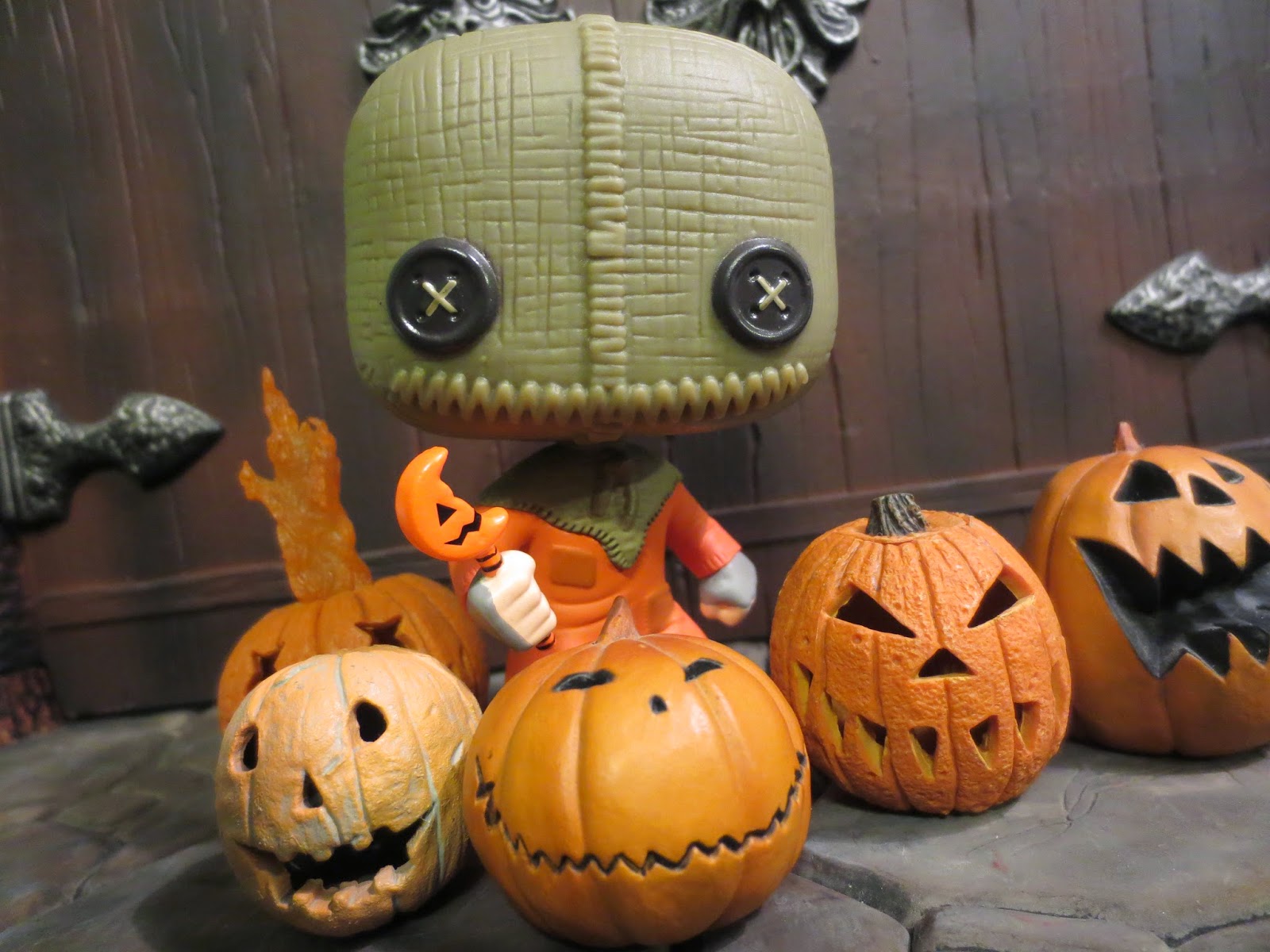 These figures don't come with accessories as far as I'm aware, so Sam isn't unusual in that regard. Of course, I have lots of small toy pumpkins that I'll display around him come Halloween! 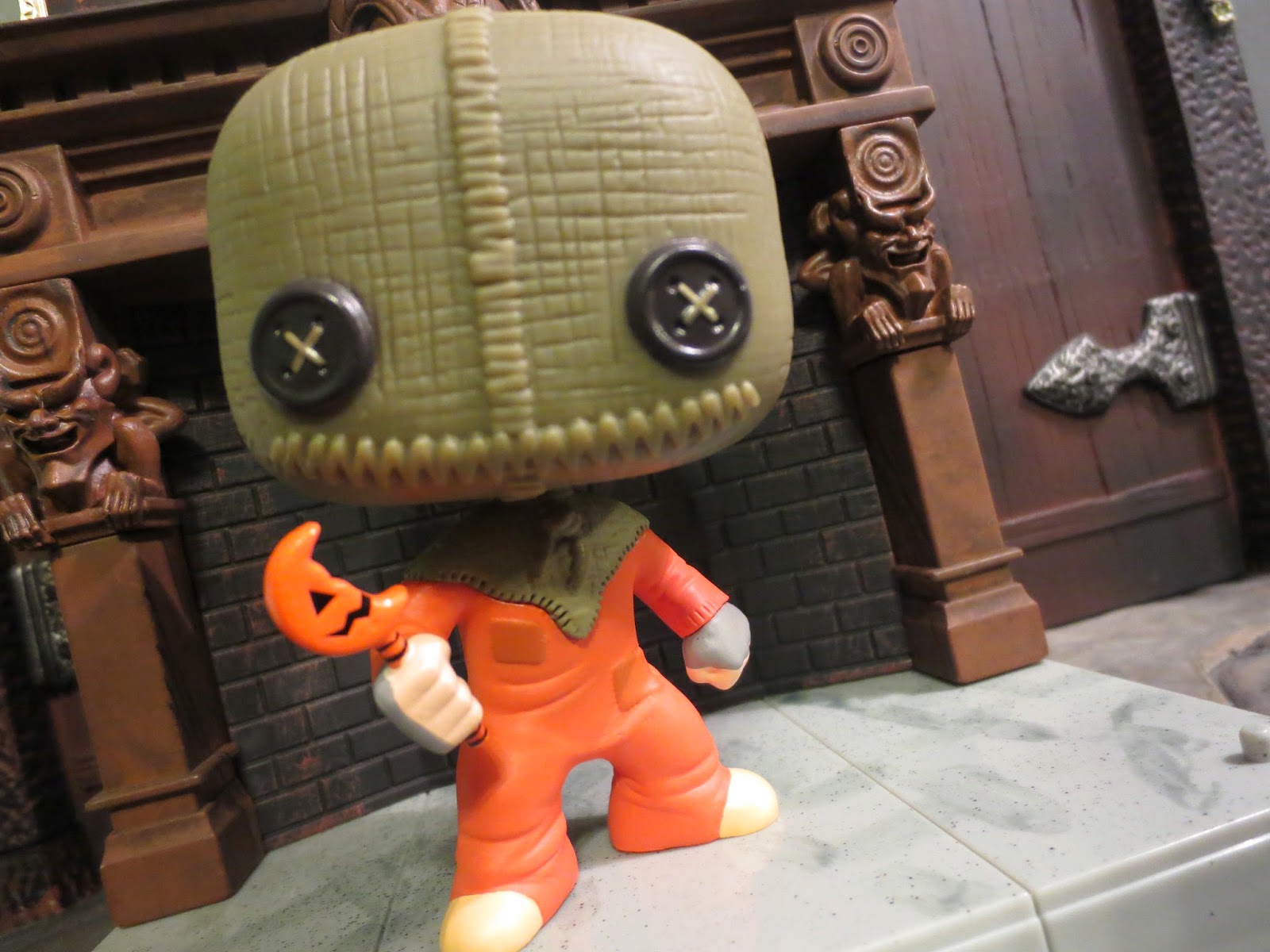 This is a really neat little toy. He's definitely more of a decoration or collectible than a traditional action figure, but I really think these would appeal to kids as they're bright and colorful with a fun aesthetic. As I mentioned at the beginning of the review, prior to picking up Sam the only FunKo POP! vinyl I had was Batgirl and a few of the minis, but since I love both Trick 'r Treat and Halloween so much, I found it impossible not to snatch up Sam when I saw him in stock at Big Bad Toy Store. He's a really fun little collectible and decoration that I'm sure you'll see more of on this site come Halloween. I'm giving him a Great both because of my love of the character and because of how well FunKo executed him.

If you're interested in a Sam of your own, check out Big Bad Toy Store or Entertainment Earth. Also, check out reviews of some of the Funko Mystery Minis I've reviewed: