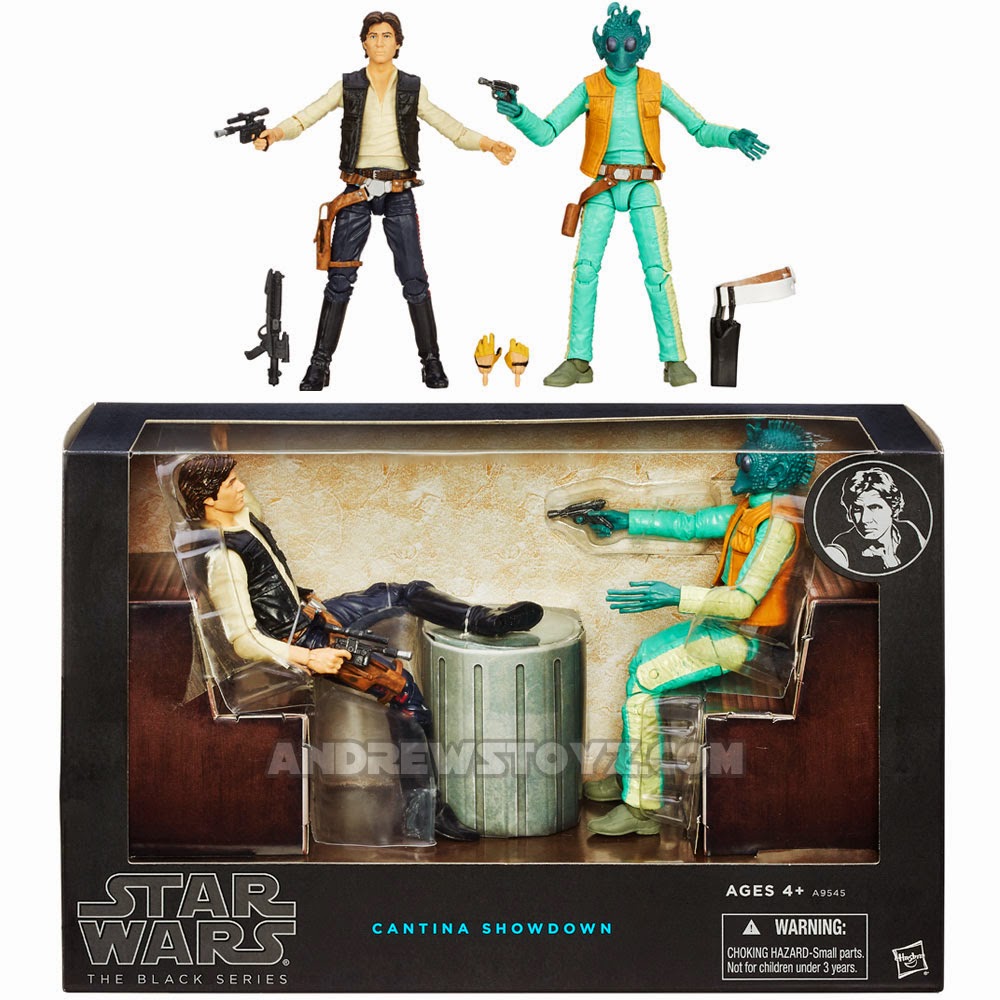 Andrew's Toys recently posted this image of what looks to be an upcoming Star Wars: The Black Series release: Cantina Showdown. They currently do not have a price or release date listed, but they do show this very clear picture that suggests the contents of the set: Han Solo and Greedo. You know, two of the three easiest to find Star Wars Black figures out there. Greedo is definitely a pretty common figure to find and Han Solo has appeared in both series 2 and 3 (some e-tailers have even discounted him quite heavily). This is a fairly attractive looking set in regards to the packaging, but is there any real reason for most collectors to purchase this set?  Not only do I own both of these figures, I reviewed both of them last year. More thoughts and details after the break....

So, here are a few random thoughts:

* What comes in the package that makes this a new product? The backdrop, chairs, and table all look to be simple cardboard, so that's not a big draw. The unpackaged image (if those are actual figures from the set) doesn't show any new accessory. Once again, what's the draw here?

* Why in the world did Hasbro pick this? Is this going to be a simple exclusive or a mass market release? If we hadn't already received both of these figures yet, this would be a brilliant release, but I'm sure anyone who wants these has already purchased them. Places like Big Bad Toy Store sold Han at a heavy discount and Amazon has had both figures listed under retail price many times over the past 6-8 months. This would have been the perfect way to offer easier figures such as Han and Luke as Stormtroopers or even a desired repack such as two Stormtroopers or two Sandtroopers. This really seems like the worst idea in this line yet.

*Is there any reality in which this set is a good idea? For being a fairly young line, Star Wars Black has had some real issues: many retailers just don't stock them, repacks haven't been handled well, and the one per case policy has really made some figures impossible to find (Boba Fett, the Stormtrooper) while making sure that other figures keep the pegs nice and toasty (Princess Leia in her slave outfit, Greedo, Han Solo). This just seems like a set designed to exacerbate a problem already plaguing this line.