Action Figure Review: The Shredder from Ninja Turtles by Playmates 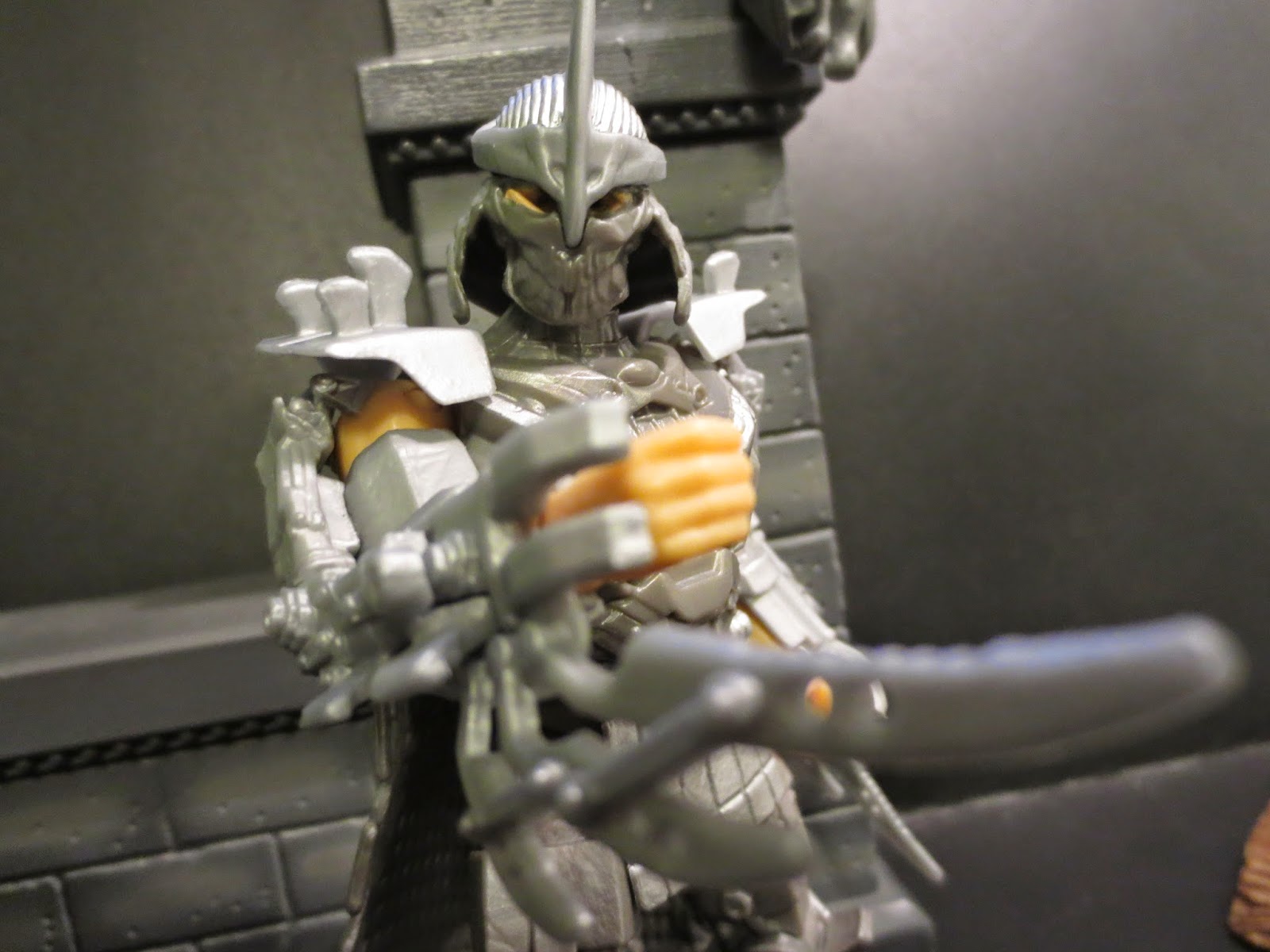 At this point I am cautiously optimistic about the new Teenage Mutant Ninja Turtles film that is set to be released on August 8th, 2014. I really, really want it to be awesome but, like many turtles fans, I do have my reservations. This hasn't stopped me from getting excited about some of the cool new Turtles like the various flavors of Crush soda (we drank some on the most recent episode of the Confirmed Epic Podcast), the TMNT Gushers, and of course the new toys from Playmates. I'm rather charmed by the toyish simplicity of the TMNT toys based on the Nickelodeon Cartoon but I decided I definitely wanted some of the movie figures, too, so I selected a few that I thought might integrate into the Nick line: The Foot Soldier, Raph in Disguise, and The Shredder, who I'm reviewing today. As I mentioned the last time I reviewed an action figure of The Shredder, I'm not sure the character has ever had a truly definitive action figure and after reviewing this new move version, I still feel the same way (let's hope Playmates reveals a Shredder as part of their TMNT Classics line). We don't know much about Shredder's portrayal in the film; there are definitely some images in the trailer that make him look robotic at times. I guess all that will be revealed in a little less than a month, huh? For now, let's look at Shredder in more depth after the break.... 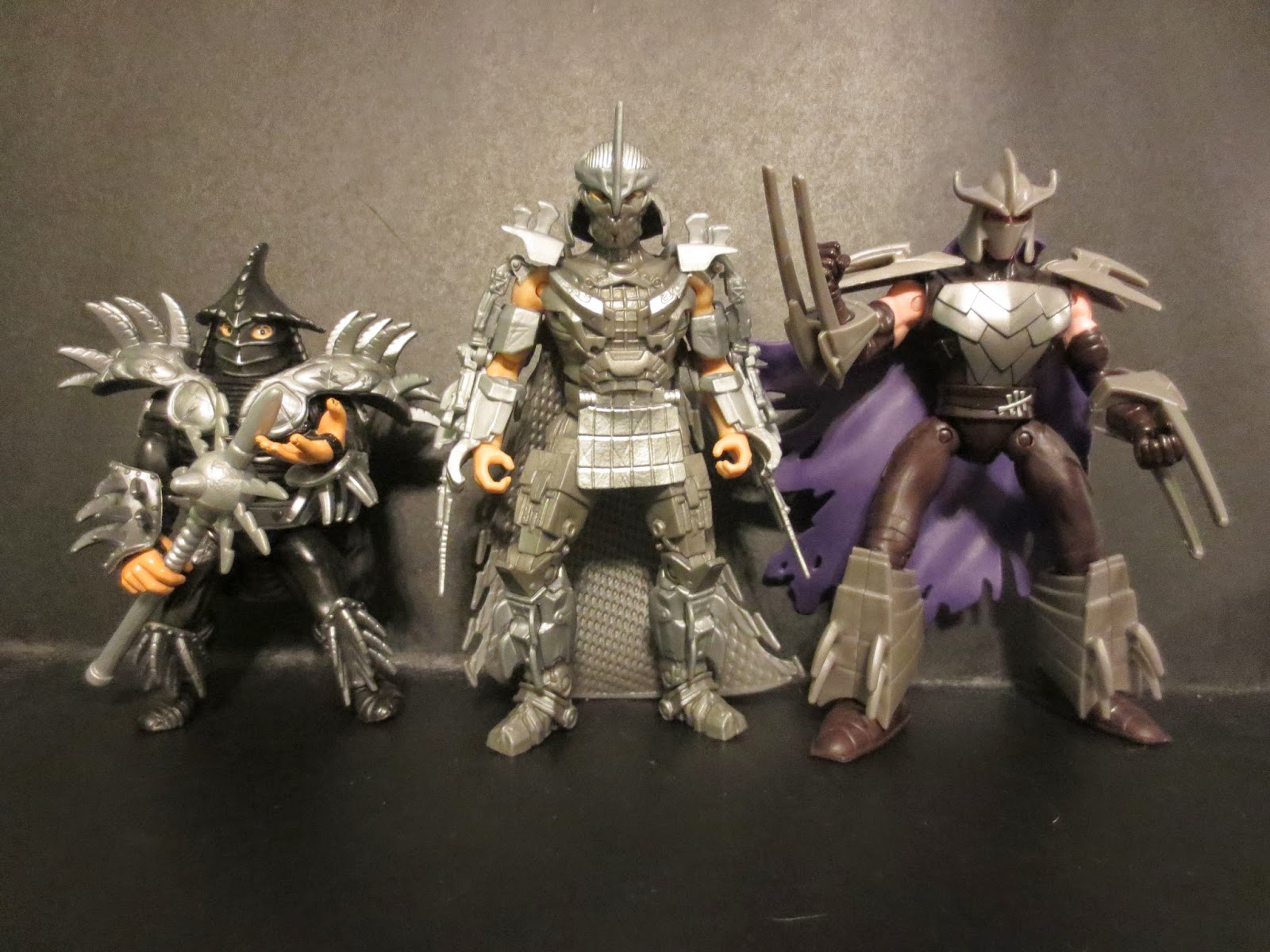 The Shredder stands almost 5 3/4 inches tall (almost 6 inches if you count the crest on the front of his helmet) which makes him a good bit taller than your standard Nickelodeon based TMNT figure and just a little taller than the movie based Turtles (who are definitely taller than they are typically depicted in other media). Rather than going for a stylized, animated look like with the standard TMNT line, Playmates tried to give these guys a bit of a realistic vibe. I'll have to be honest and say that it doesn't work that well. The Turtles look a little better, but Shredder's general appearance puts me in the mind of a bootleg toy. Playmates tried to go realistic but it seems they just don't have the skills or the resources to make it work. 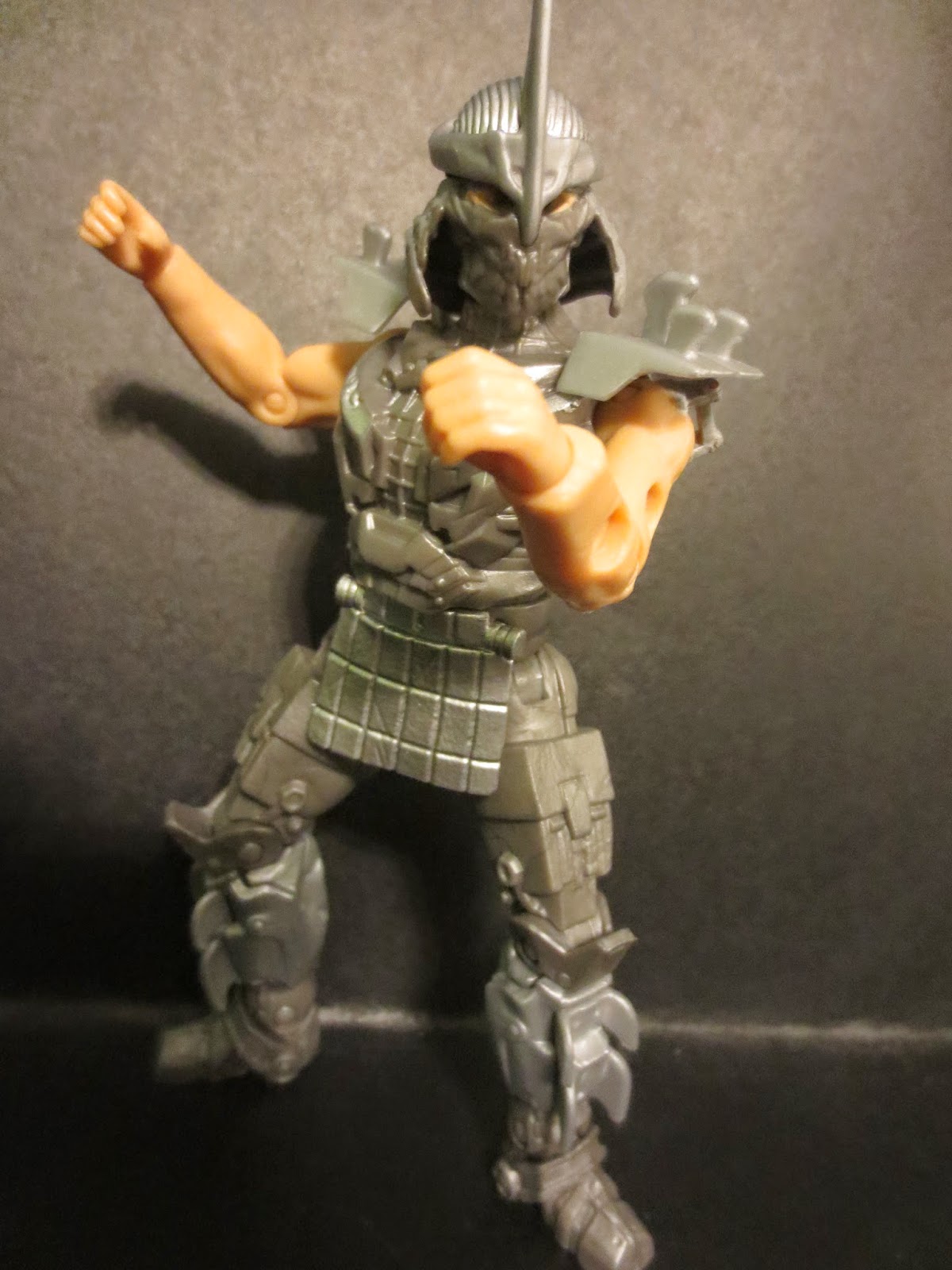 The Shredder features the following points of articulation: hinged ankles, hinged knees, swivel/hinge hips, a swivel waist, hinged shoulder pads, swivel/ hinge shoulders, hinged elbows, swivel wrists, and a swivel neck. I can't say the articulation is terrible, especially when so many figures from the Nickelodeon line feature limited articulation, but I do wish the arms had a bit more motion. Particularly, they need some sort of bicep swivels to give Shredder some better lateral motion for fighting poses. Shredder's wearing jointed, detachable claws and armor on his arms, so I'm guess that's why he doesn't have bicep swivels or swivel/hinge elbows. Otherwise, he seems pretty solid and durable with no quality control issues. 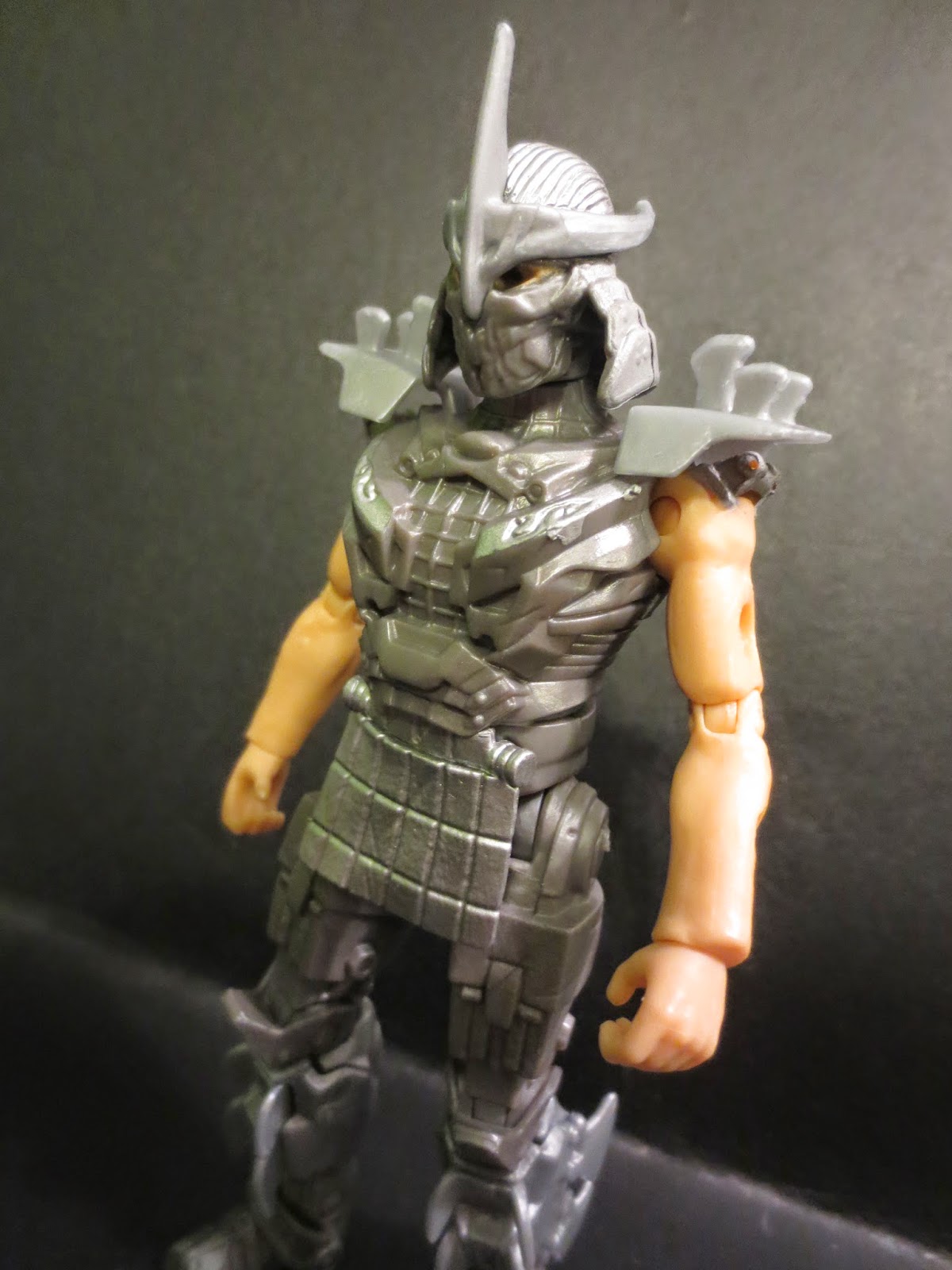 All right, first things first: What the heck is up with Shredder's eyes? His helmet looks like a mixture of Shredder's traditional samurai meets cheese grater armor with a cybernetic influence. You know, because kids these days couldn't possibly take a guy in sharp, bladed armor seriously. He's gotta be a robot! Anyways, look beyond the fairly decent helmet and look into Shredder's eyes. Or lack thereof. Is Skeletor under that armor or something? What is wrong with this toy? It doesn't look menacing or eerie; it just looks incomplete. There are also lots of little nicks and scratches in the plastic. Not sculpted detail; just bad parts of the mold, I guess. Everything below the neck looks pretty good, though. While the detail is somewhat soft, the sculpting on the chest plate, shin guards, and loincloth look all right with a good blend of futuristic and traditional armor. 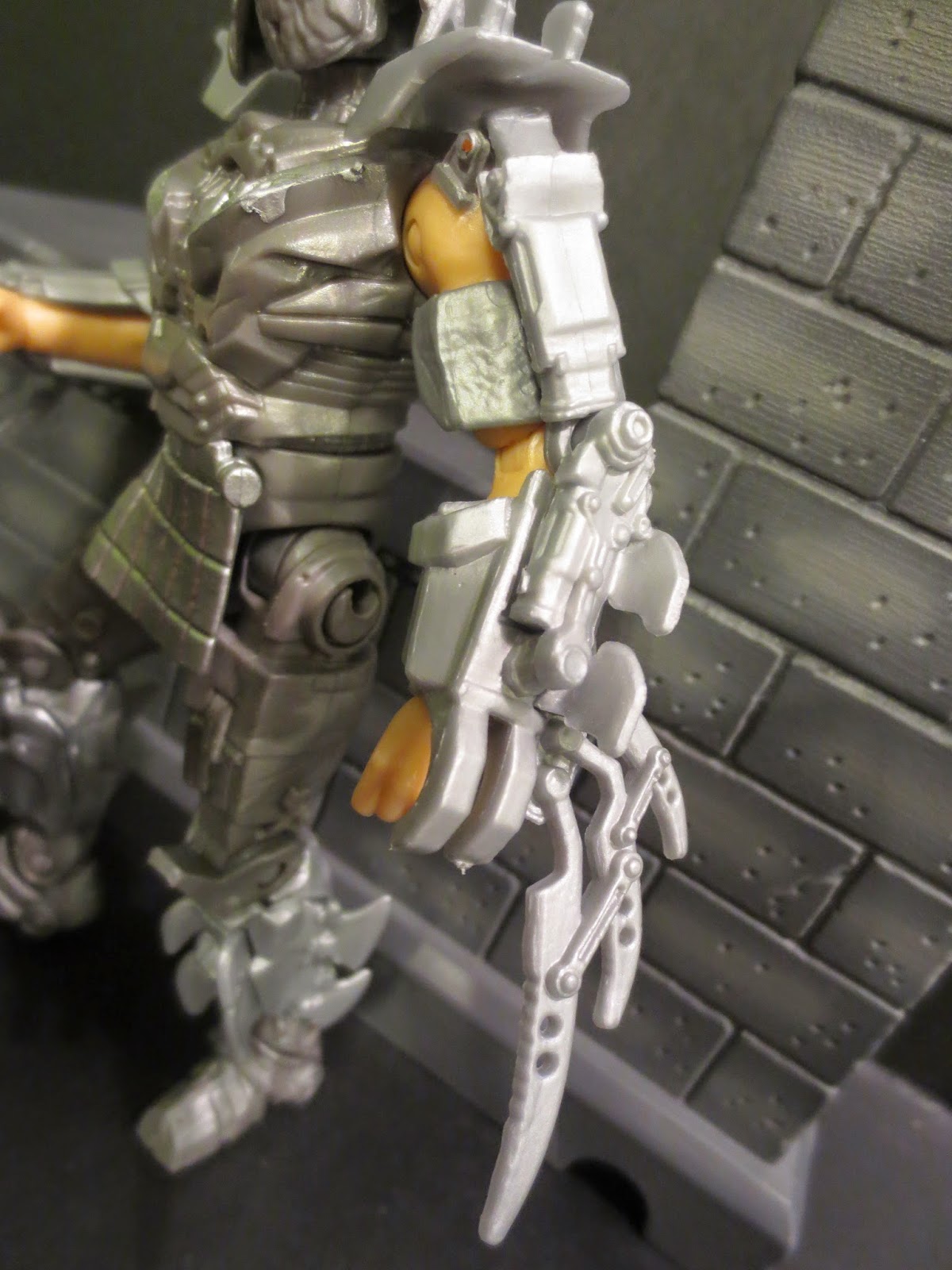 Shredder features three removable pieces that you might not consider accessories: his arm guards/ blades and his cape. The arm guards do feature some nice detail and snap over Shredder's left and right arms. His arms have little round divots in them that help to hold the armor in place while a hinge locks them on up at his shoulders. 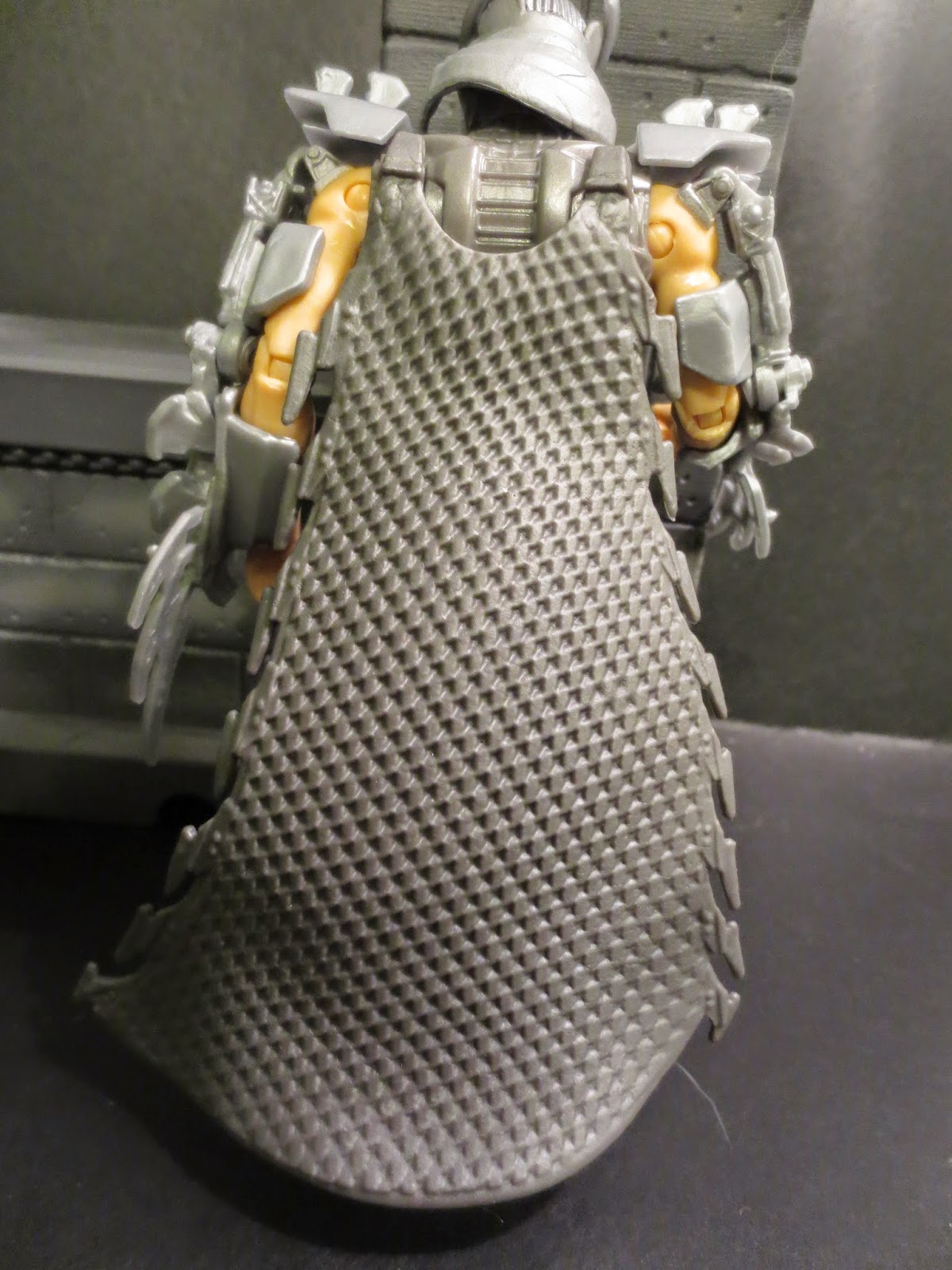 The cape looks like a net-like material (perhaps supposed to be a metal of some kind) and is covered down the sides with blades. I kind of like this piece as the idea of Shredder using his cape as a weapons seems rather cool. It plugs into two slots on Shredder's back and stays in place fairly well. 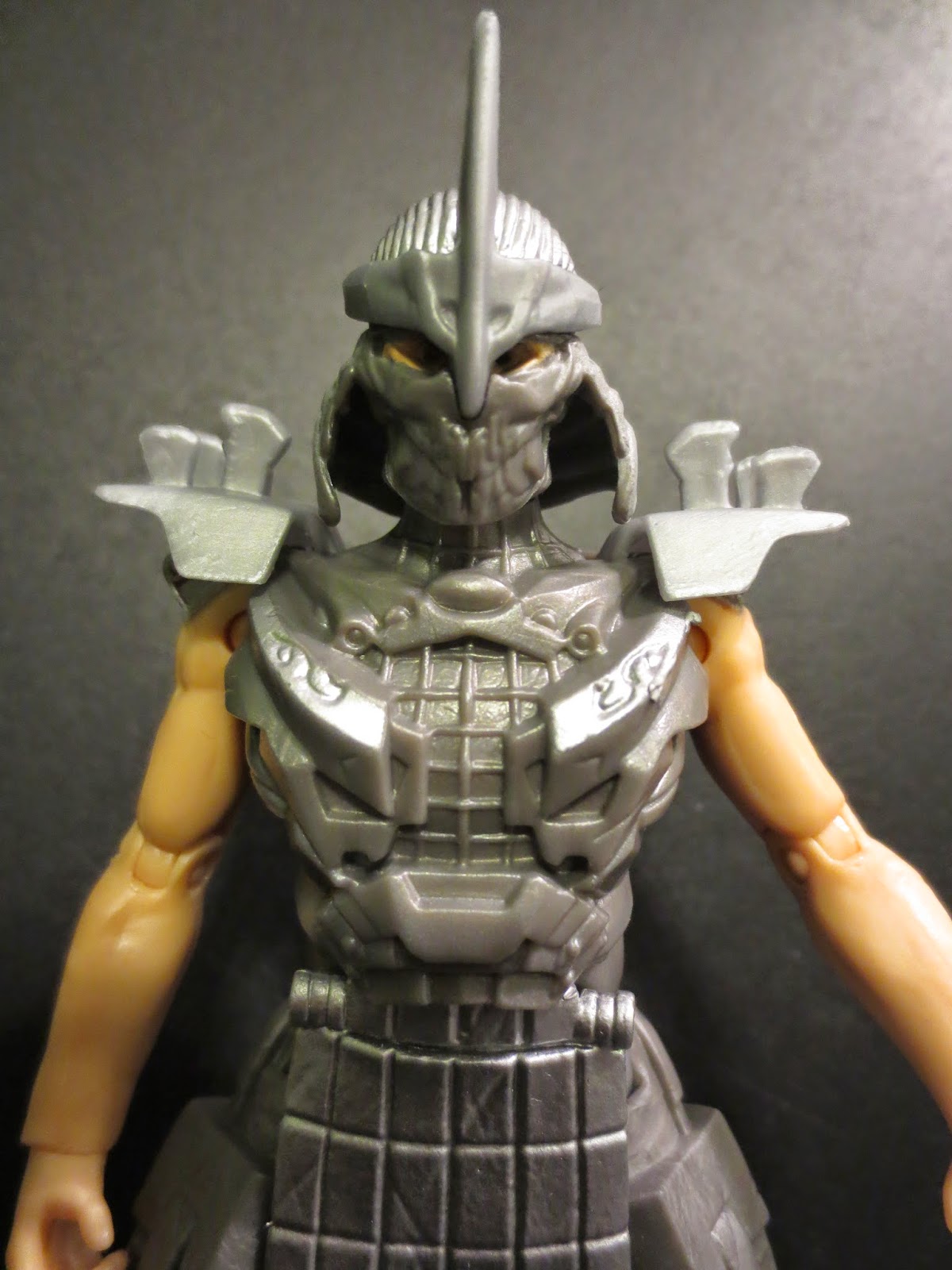 There is very little paint on this figure and I think that kind of hurts its appearance pretty drastically. Most of the figure is simply molded in the the colors needed such as a few shades of grey (not fifty), and a skin tone for the arms. The only paint on the figure might be the paint around the eyes (which looks wonky as all get out) and a few small silver applications on the chest and loincloth. Maybe this is just what Playmates had to do to keep this guy selling in the $9 price range? I definitely think better paint would have help, but as it is this guy is pretty weak. 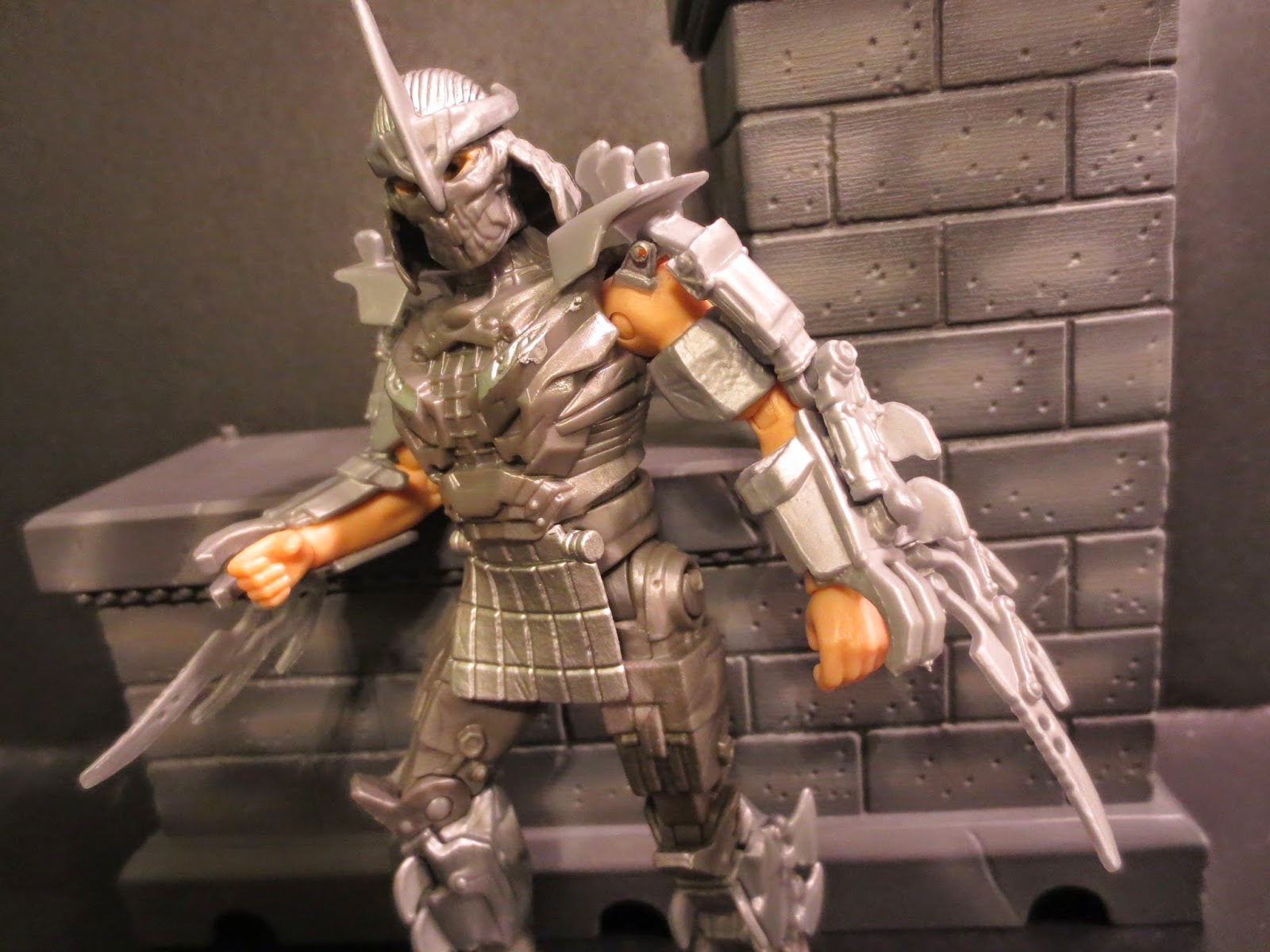 Playmates' Nickelodeon based toyline hasn't been the greatest toyline ever, but it has been consistently fun, unique, and easy to track down with an eclectic mix of characters. It's a true toyline made for kids that many collectors are jumping into because it reminds us of our childhoods. The "Ninja Turtles" movie line (that's what the package says: "Ninja Turtles") just seems like a standard, lazy movie line. Weak sculpting, weak articulation, and weak paint really just bring Shredder down. There's some decent work here in places but overall this is one of the weakest modern toy releases I've seen. I hope I'm not coming off as a fanboy who is just mad about the new film because I'm definitely not.  I don't any real problems with the design of this figure; just the execution. I'm giving Shredder an Eh and a 1/2. He does have some removable accessories that work well and he feels solid, but otherwise this is a completely forgettable incarnation of one of the greatest bad guys around. Unless you are a hardcore collector of TMNT or Shredder memorabilia, this guy is probably best left in the recycling bin. 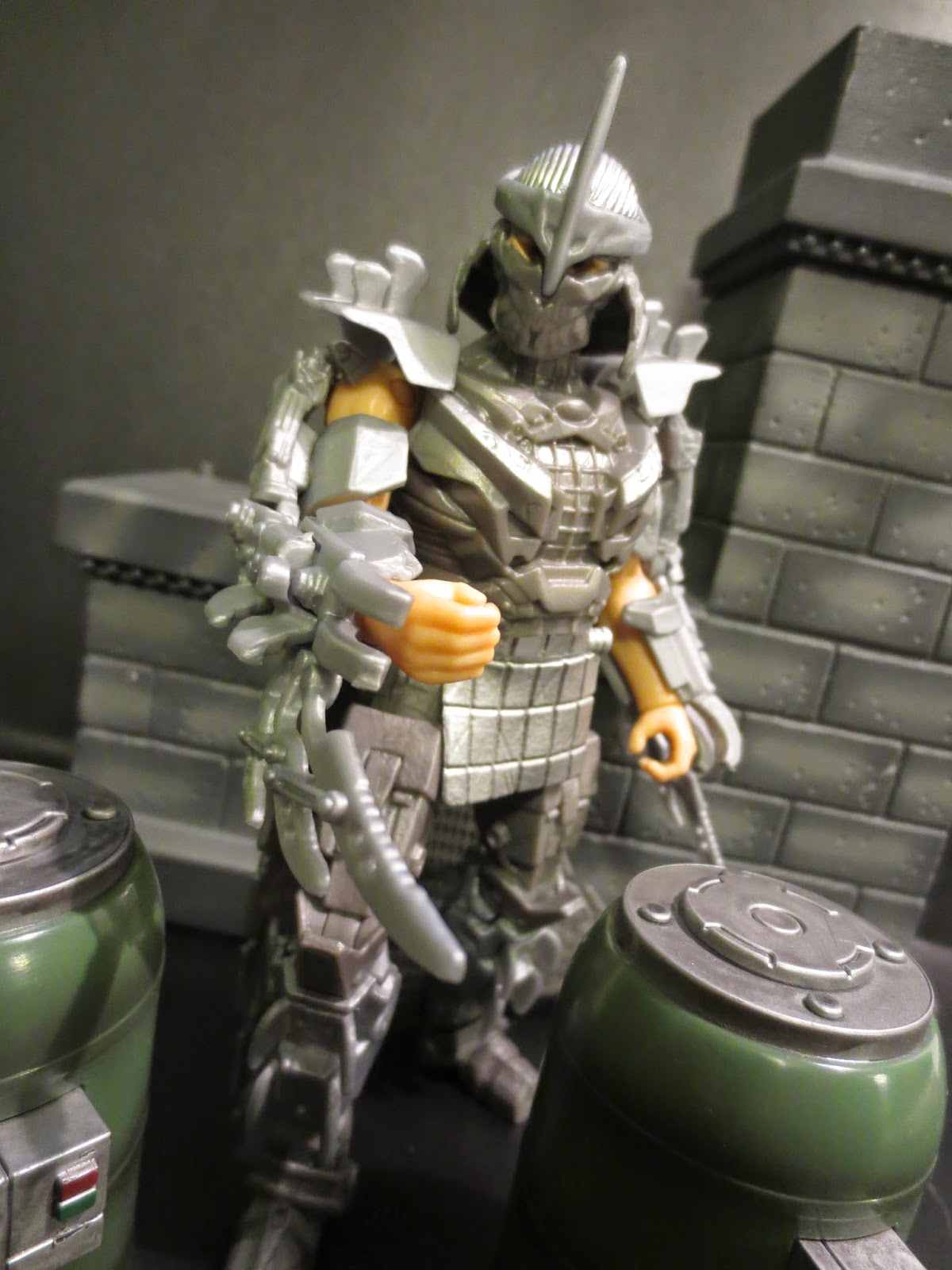 Still feel the need to pick up a Shredder of your own? Currently you can order a massive case of TMNT movie figures from Big Bad Toy Store or Entertainment Earth. Also, check out our other TMNT reviews here at ThEpic Review: