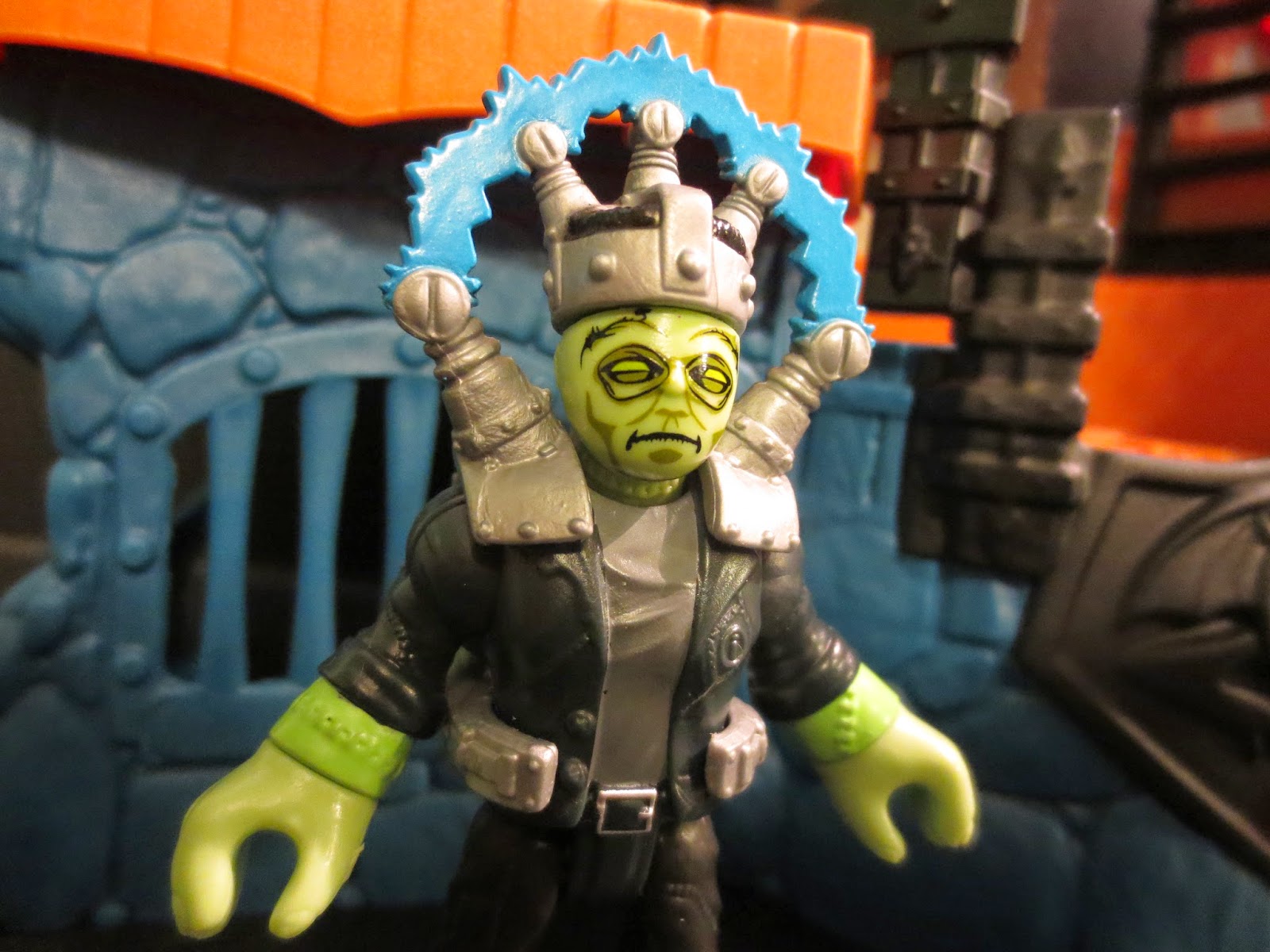 It seems that a lot of you really like the Imaginext line, particularly the horror themed figures. I know I do! That's why today I'm going to be reviewing one of the series 2 figures: Frankenstein's Monster! And yes, while I know that he's technically Frankenstein's Monster, I'm most definitely going to refer to him as Frankenstein during the review at some point. Why is that? Well, it could just be out of old habit but it could also be out of respect for the creature. In the novel, didn't the Monster (and arguably Dr. Frankenstein) consider himself to be the son of Victor Frankenstein? Well, then Frankenstein would be a perfectly acceptable name. It's all about how you choose to identify yourself. Also, thank about when you need to blow your nose. What do you ask for? Most of the time you probably ask for a Kleenex even though Kleenex is a manufacturer of tissues. How about asking for a Band Aid rather than an adhesive bandage? Band Aid is the maker and the brand, not really the product name. All that is to say that referring to Frankenstein's Monster as just Frankenstein is probably like calling your Apple manufactured product an Apple or your Ford manufactured Fiesta simply a Ford. Anyways, let's just talk about toys and spookiness now.  Ooohhh!!! Halloween!!!
Umm... Just join me after the break.... 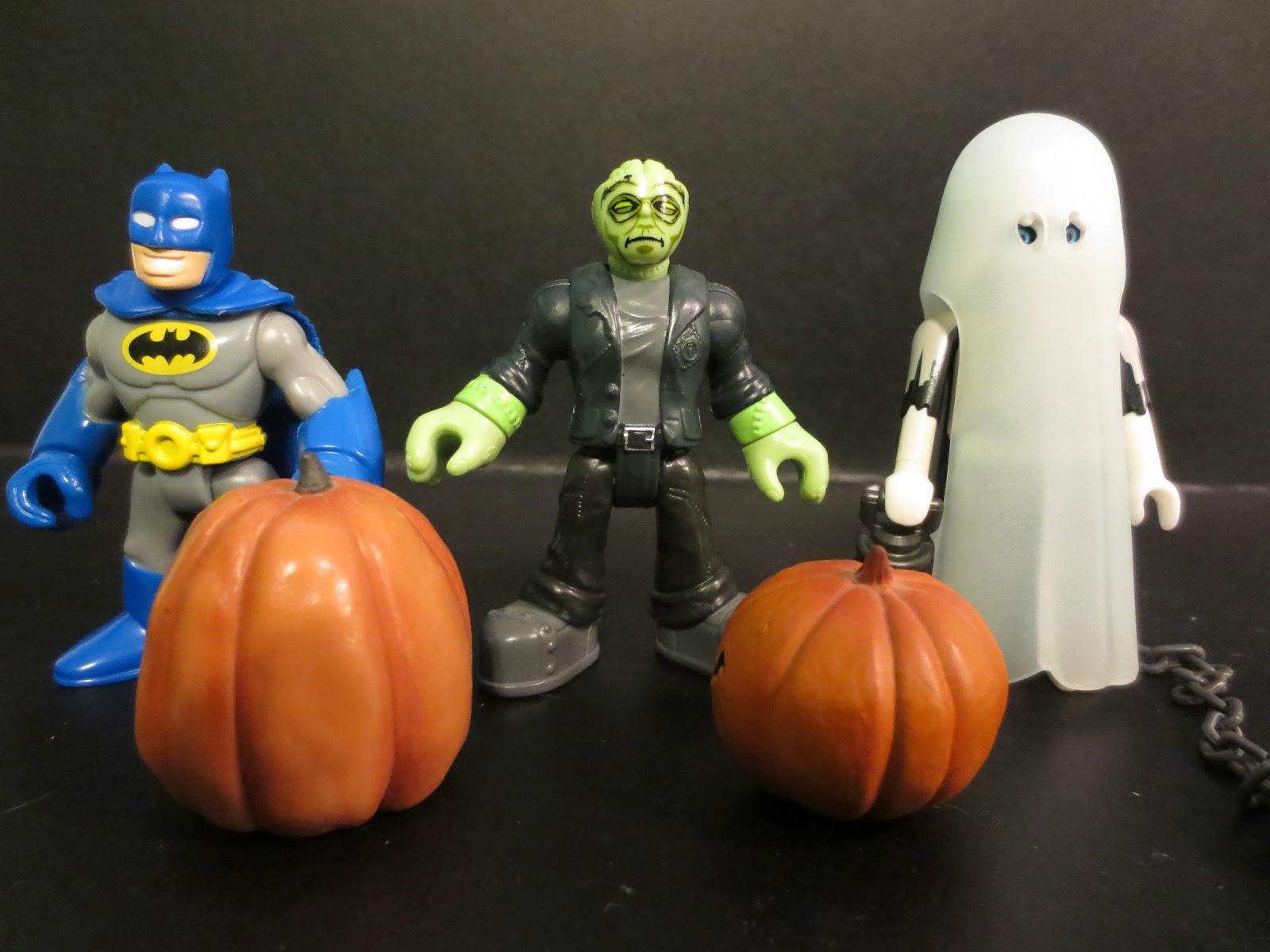 Frankenstein's Monster stands around 2 7/8 inches tall which is pretty standard for these figures. While Imaginext figures feature some elements like printed faces, they also feature a good deal of unique sculpting. They really have a great animated style that I just find extremely appealing. Frankenstein's Monster here is part of the second series of Imaginext Collectible Figures which are offered blind-bagged. Fortunately, each package has a raised number to help you identify which figure you're getting so you don't have to sit in a toy aisle feeling up packages like some kind of creep. Check out Toyriffic for a great list of the series 2 numbers. 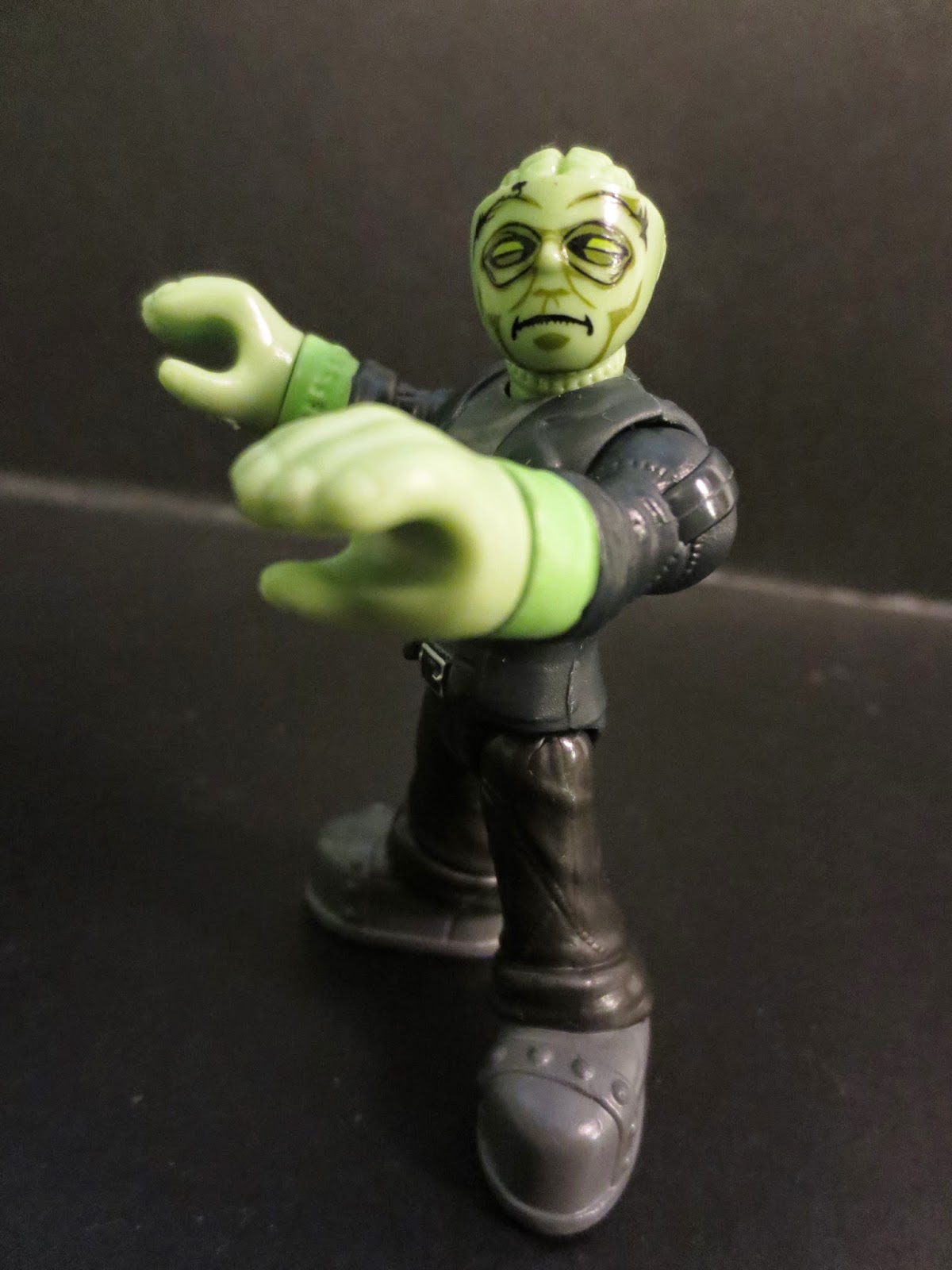 Frankenstein features the standard Imaginext articulation: Hinged hips (they're connected like a Playmobil klicky), swivel/hinge shoulders, swivel wrists, and a swivel neck. Imaginext figures stand great on their own and always feel solid and durable. Kids and collectors could sit around and play with these guys all day with little chance of breakage. 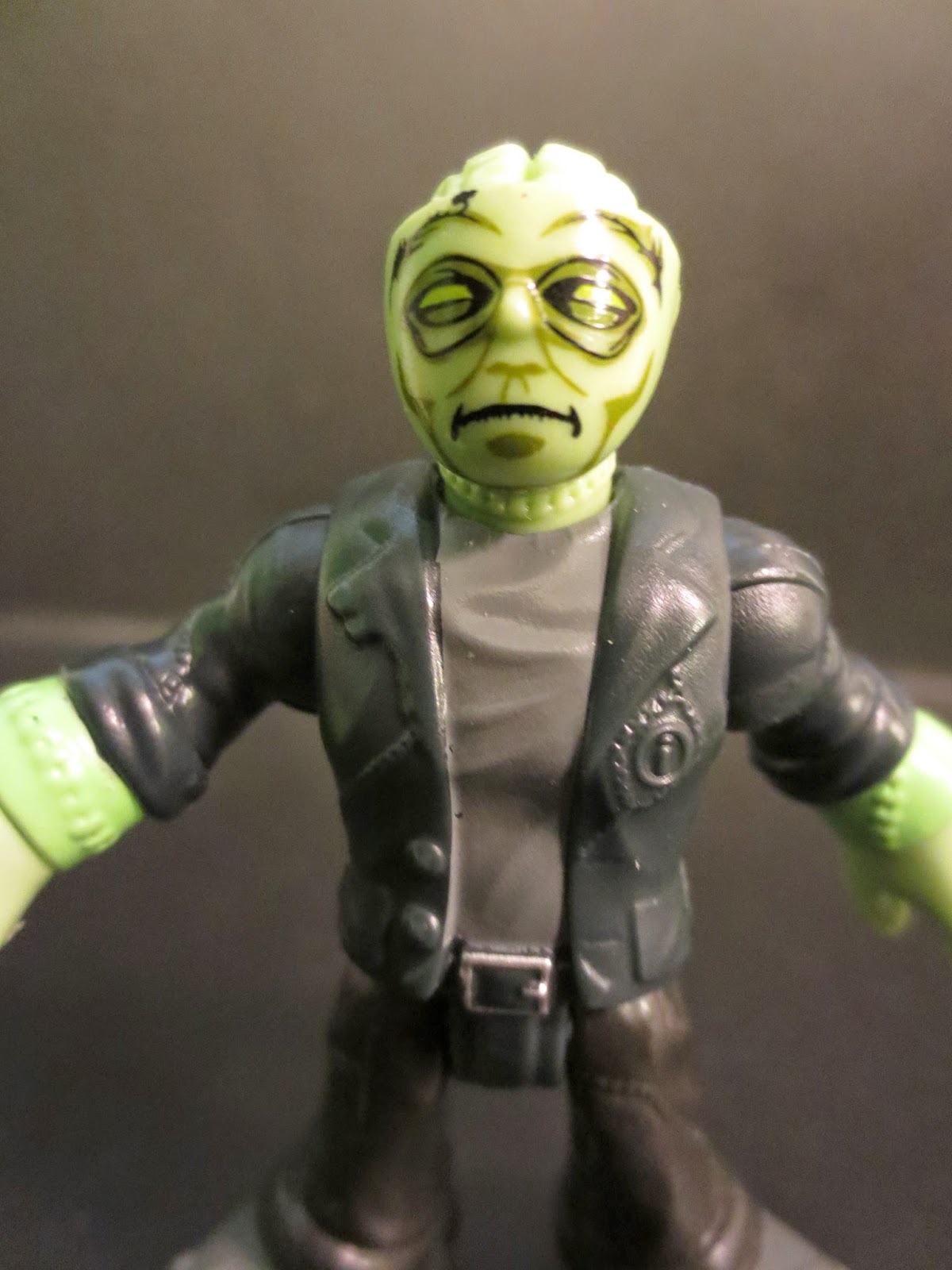 I'm always amazed at the sculpting on Imaginext figures as they feature so many great little details! This is a very traditionally dressed version of ol' Frank: Big black suit, grey shirt, and thick, heavy boots. The clothes are covered with little stitches and seams while the boots have some bolt-like fastenings on them. There's also a little Imaginext "I" logo on Frank's left jacket breast. Since most of the face is a tampographic stamp we'll talk about that in a minute, but there are still some great details on Frank's skin. He has some stitches on his wrists and throat, cracked fingernails, and an exposed brain. Yes, keen observers will notice that this Frankenstein has an exposed brain and is missing his traditional flat head and hair. Why is that? It's because Fisher-Price opted to make the top of the head and hair part of Frankenstein's accessory. Kind of an odd choice, but it works as long as you like his electrode covered backpack. 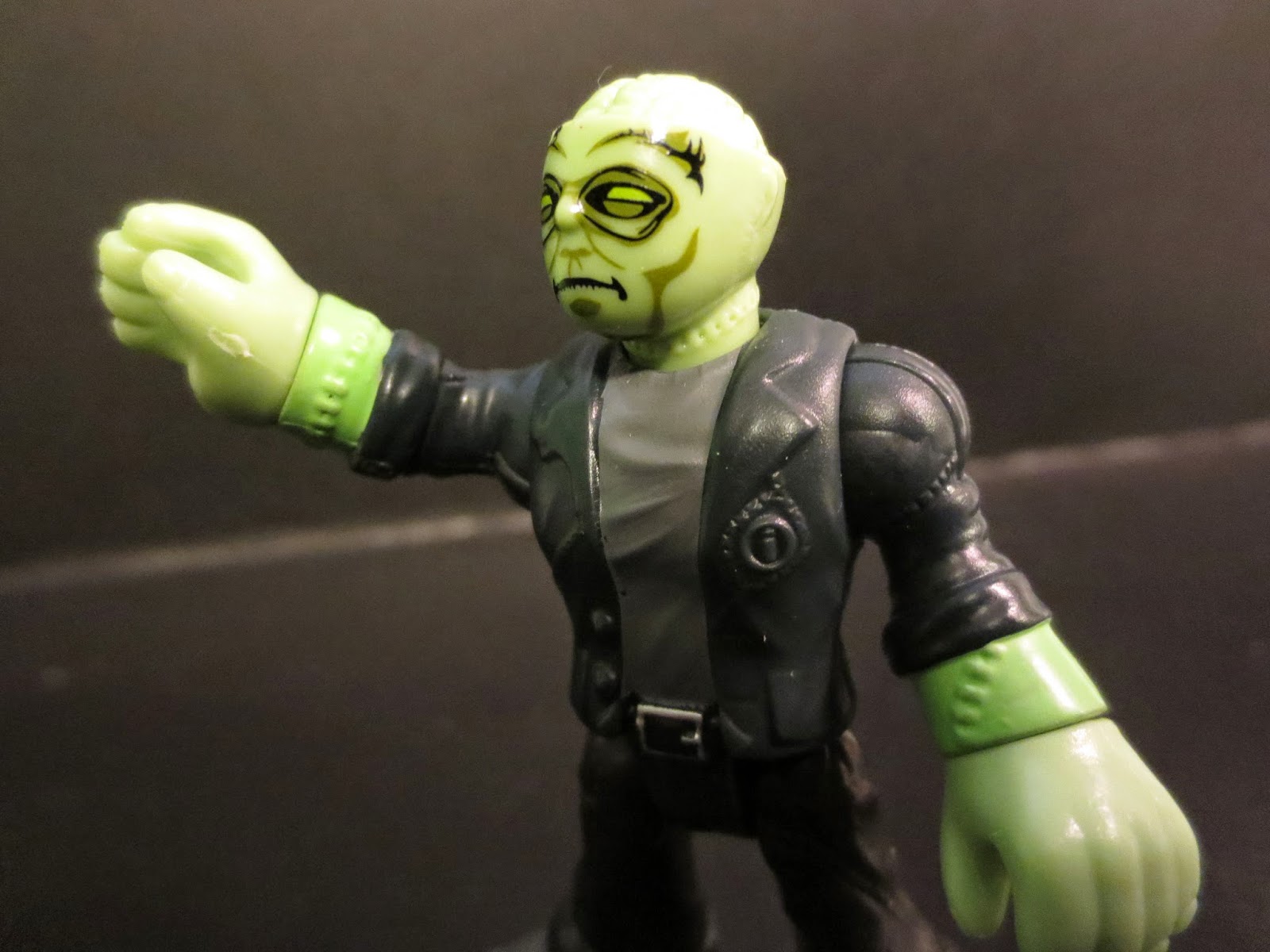 The paint work looks great as the simple black and grey outfit goes along nicely with the Monster's green flesh. Some of the clothing details are a little messy such as the separation between the boots and the pant legs and the separation between the arms and sleeves. Nothing atrocious, but worth mentioning. The face is very clean, however, and has a very Mike Mignolaesque appearance to it. I'm loving it! I wish the brain had a coat of pink paint, but maybe that detail seemed a bit too much for a Fisher-Price toy. 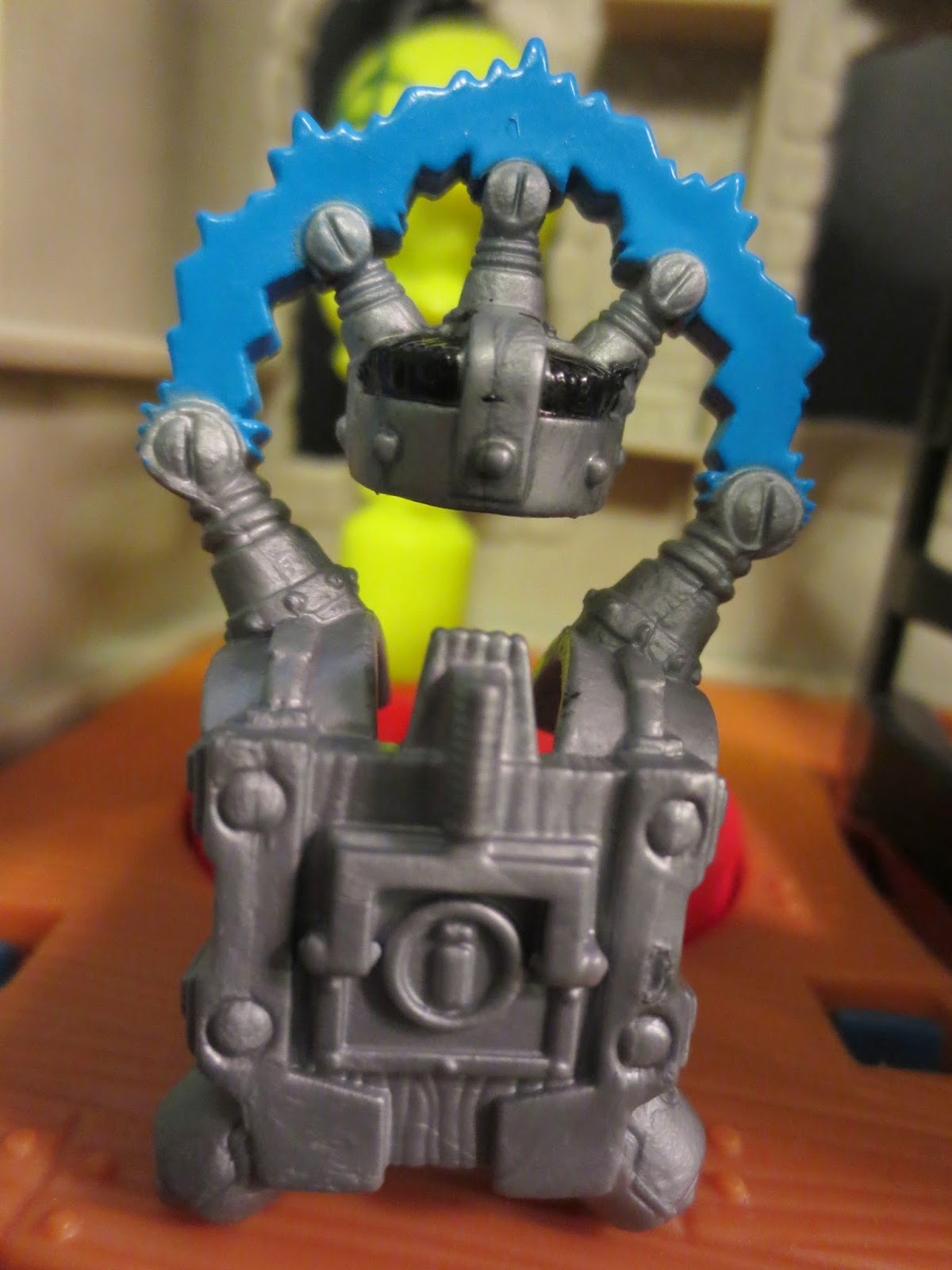 The Modern Prometheus comes with one accessory that really helps to complete his look. It's a combination backpack with an electrode lined helmet. It's covered with bolts and rivets and even has a handle on the back which presumably starts and stops the electrical current. The helmet is attached to the backpack via a large blue bolt of electricity. The electricity is simply painted blue (it would have looked awesome as a translucent piece) and keeps the helmet in place. The helmet covers the exposed brain and features Frankenstein's trademark black hairdo. The rig fits on easily and looks great. It's a fun, creative accessory for this guy that pays tribute to his birth through electricity and modern science. 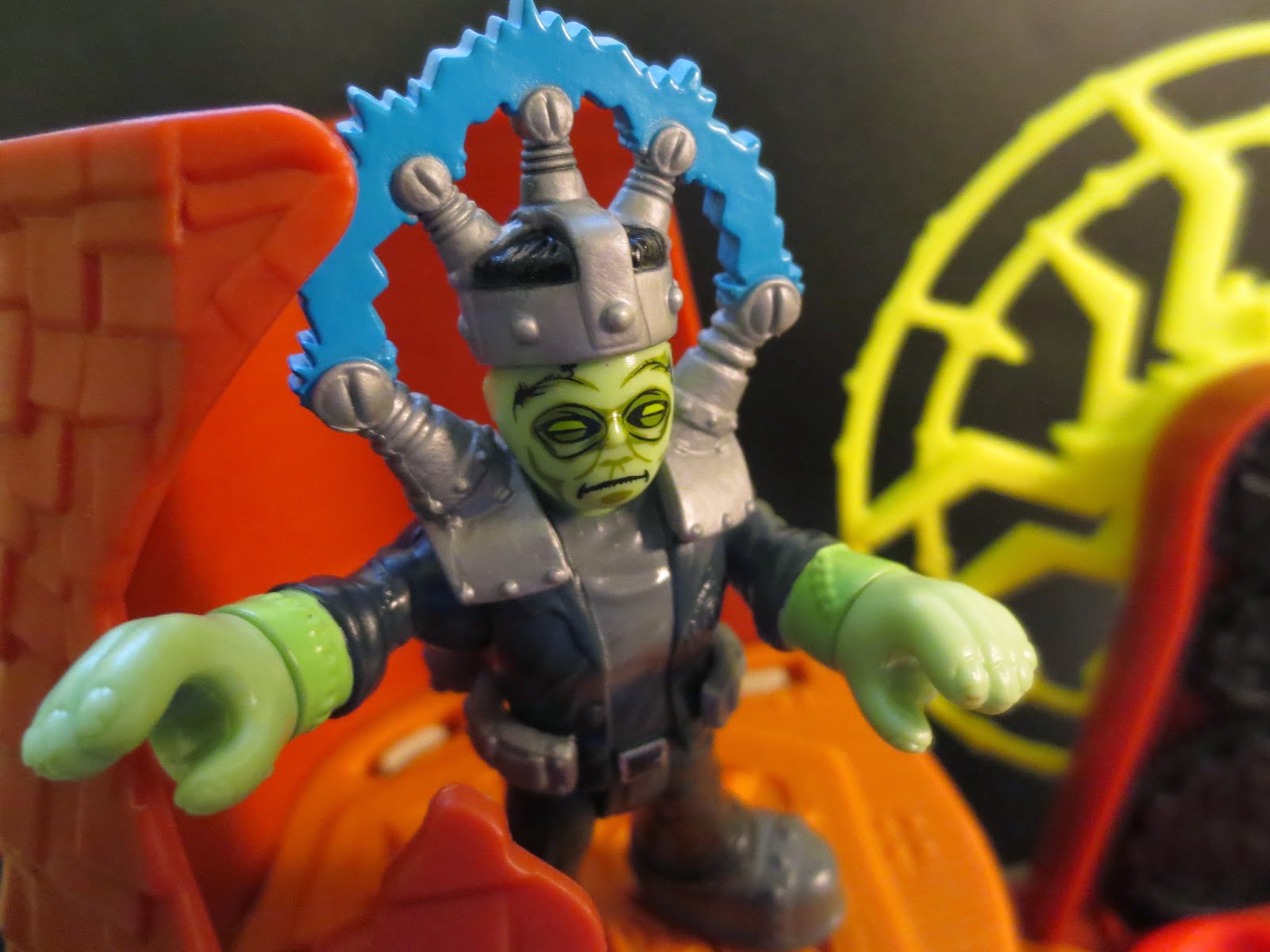 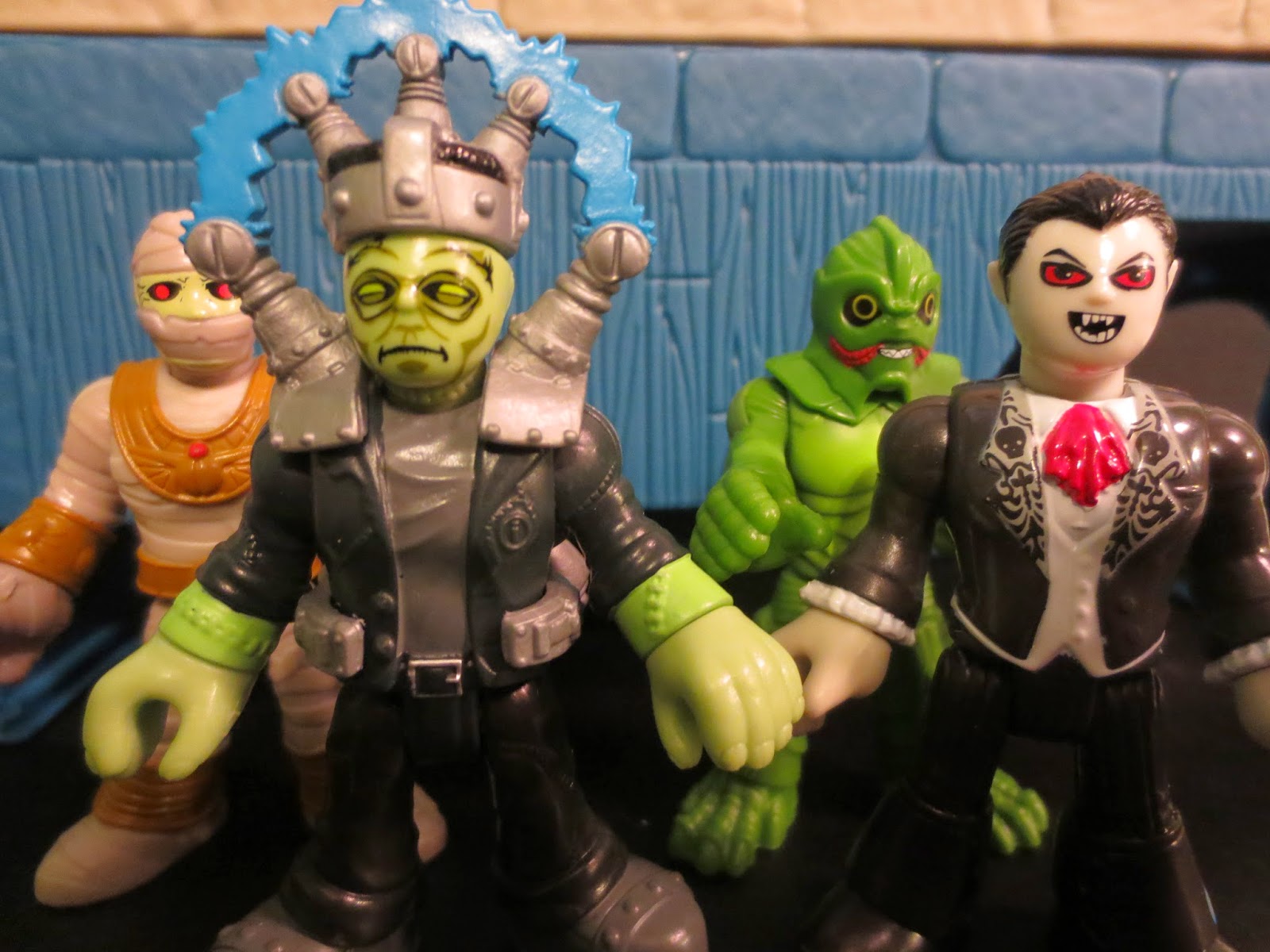 Imaginext is a really fun line of toys that seems to be willing to do some out of the box stuff and I just can't help but love them. The blind bagged figures have definitely been my favorites, particularly due to the number of horror themed characters present. Frankenstein is another fine, fun toy in this line that features a great design and a fun accessory. He definitely seems to be the toughest figure to track down from series 2, but he's well worth hunting down. I'm still seeing these guys at various stores so hopefully you don't have to work too hard to find him. I'm giving Frankenstein's Monster a Great, with my only criticisms being some of the paint transitions and the fact that he can't be displayed without his backpack and still have his traditional and recognizable look. Otherwise, this is a solid toy that you definitely shouldn't miss. 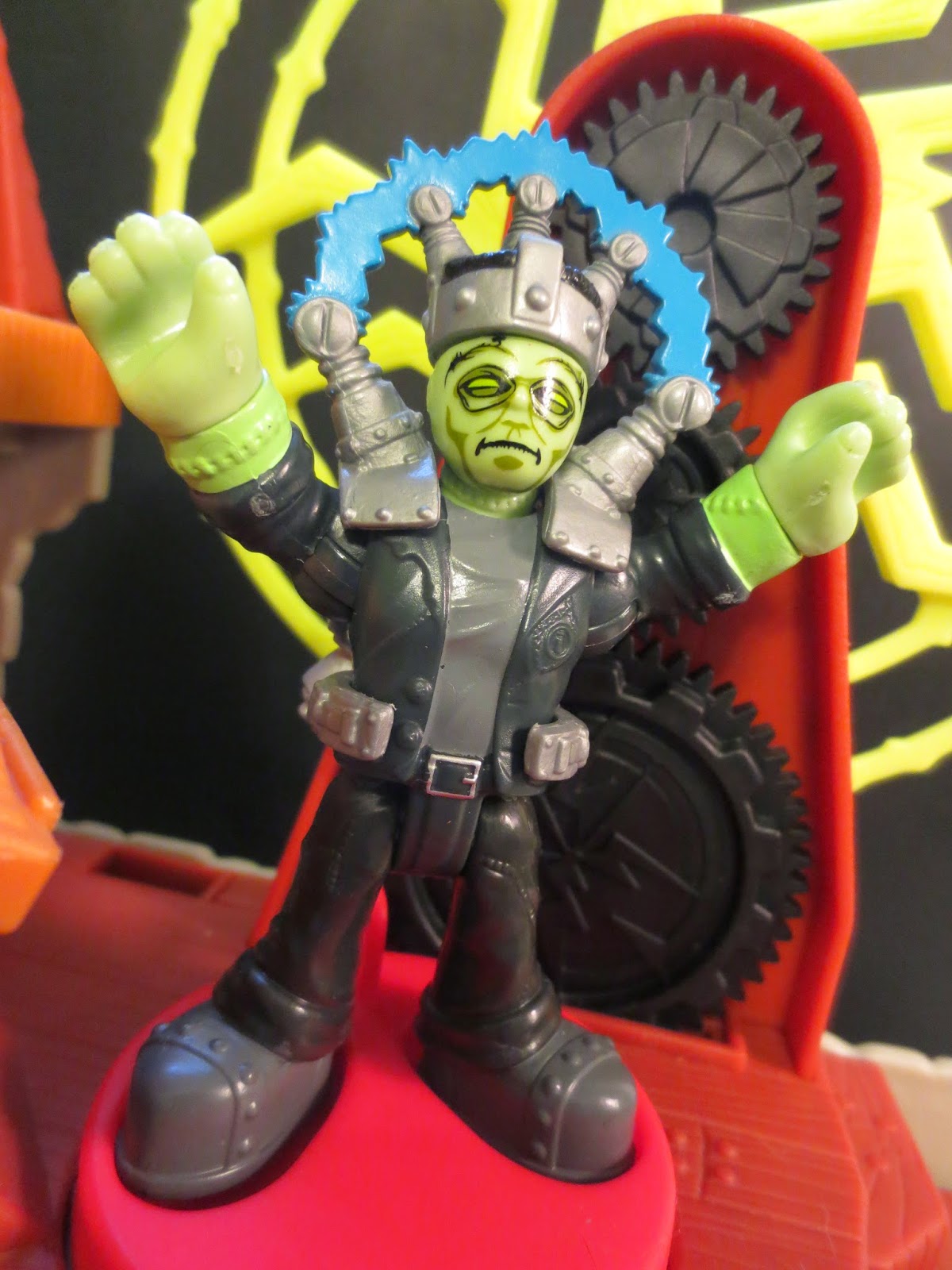