Toys in Costume: Foot Soldier from Ninja Turtles by Playmates 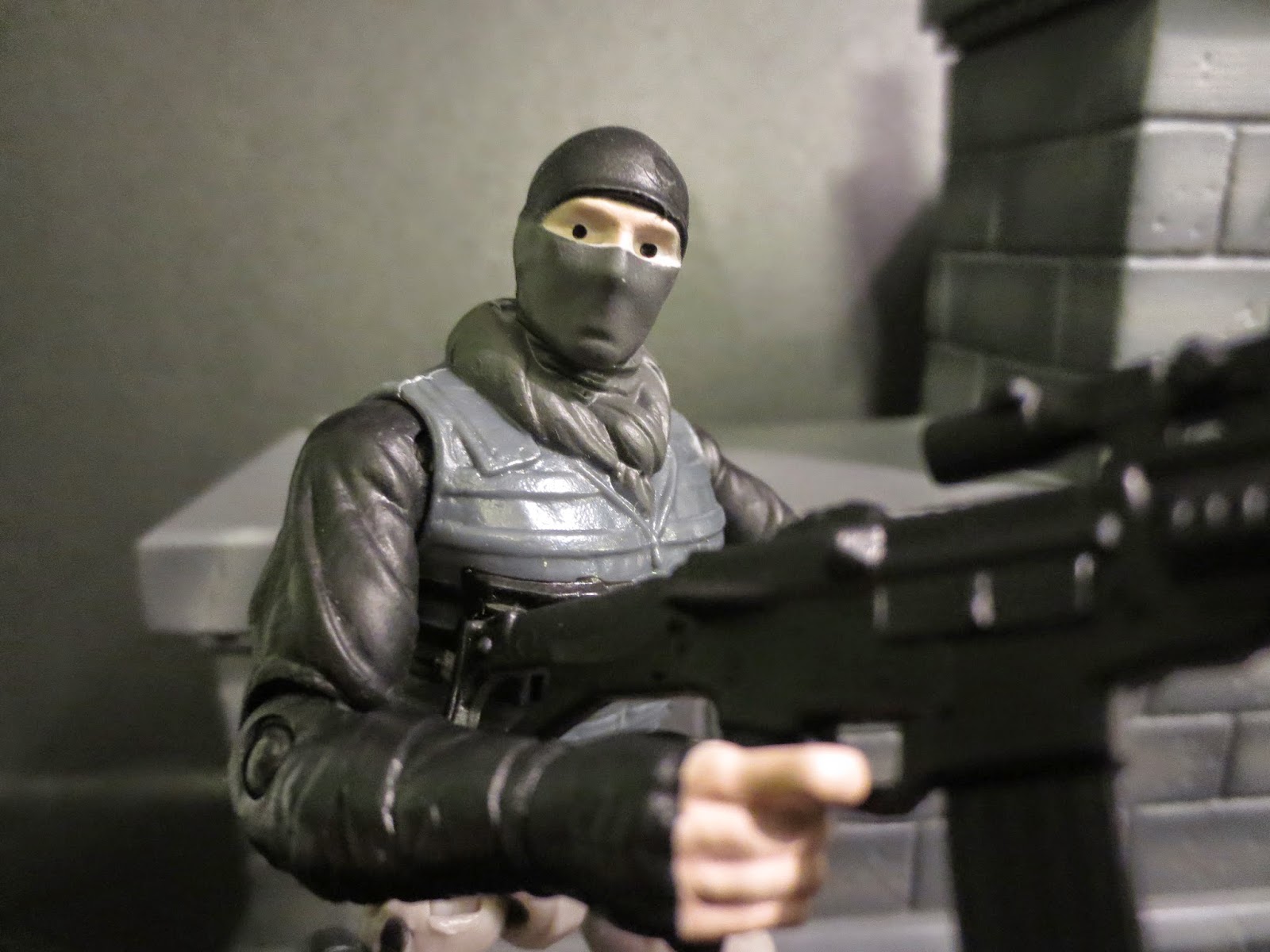 Every good property and toyline needs a nameless, faceless legion of bad guys for the heroes to battle. For the Teenage Mutant Ninja Turtles there have almost always been the Foot Soldiers, nameless and faceless legions of the Foot Clan. A variation on your archetypal ninja garb, the outfits of the Foot Soldiers have provided concealment to a number of baddies including ninja masters, common street thugs, wayward teenagers, and even robots. Typically, you know a Foot Soldier when you see one. Interestingly (and perhaps disappointingly), this wasn't the case with the Foot Soldiers in the new Teenage Mutant Ninja Turtles film. Just a cursory glance at this figure definitely reveals that the new Foot Soldiers seem more inspired by tactical black-ops military groups and video game terrorists rather than ninjas. In fact, this guy doesn't even have any swords! Still, I figured I could use this guy with my Nickelodeon TMNT figures as a generic bad guy so I picked him up the first time I saw him. Ready for a look at the new Playmates Toys' Foot Soldier? Then join me after the break... 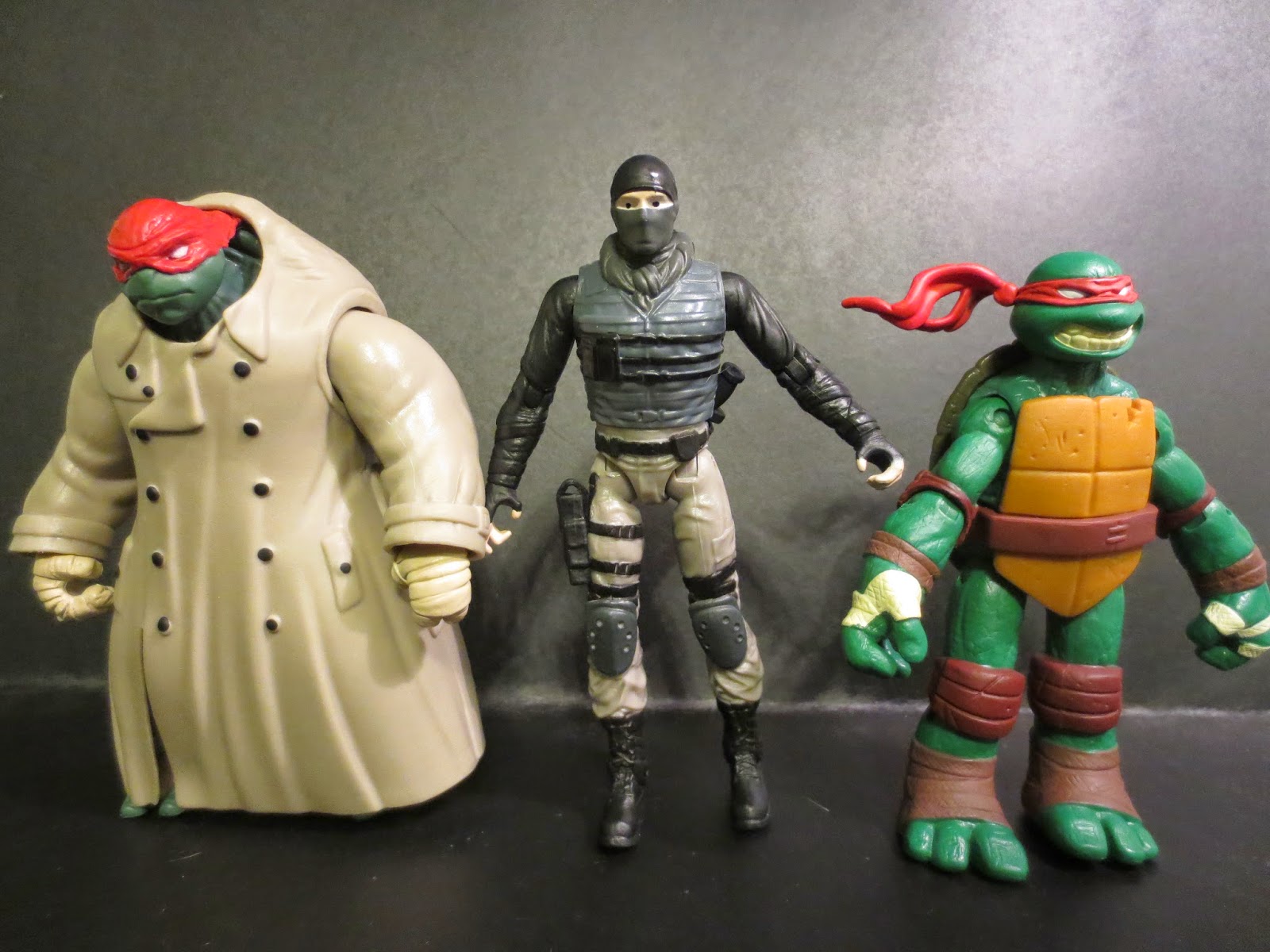 The Foot Soldier stands about 5 1/4 inches tall which makes him taller than the turtles but shorter than the Shredder. I think this will definitely help him to fit in with both the movie toys and the Nicktoon based line. The Foot Soldier has a rather soft sculpt and a somewhat cartoonish face, so he also stylistically looks OK with the cartoon based line. I'm not sure how well he really works alongside the movie turtles, however, as he seems far less detailed. 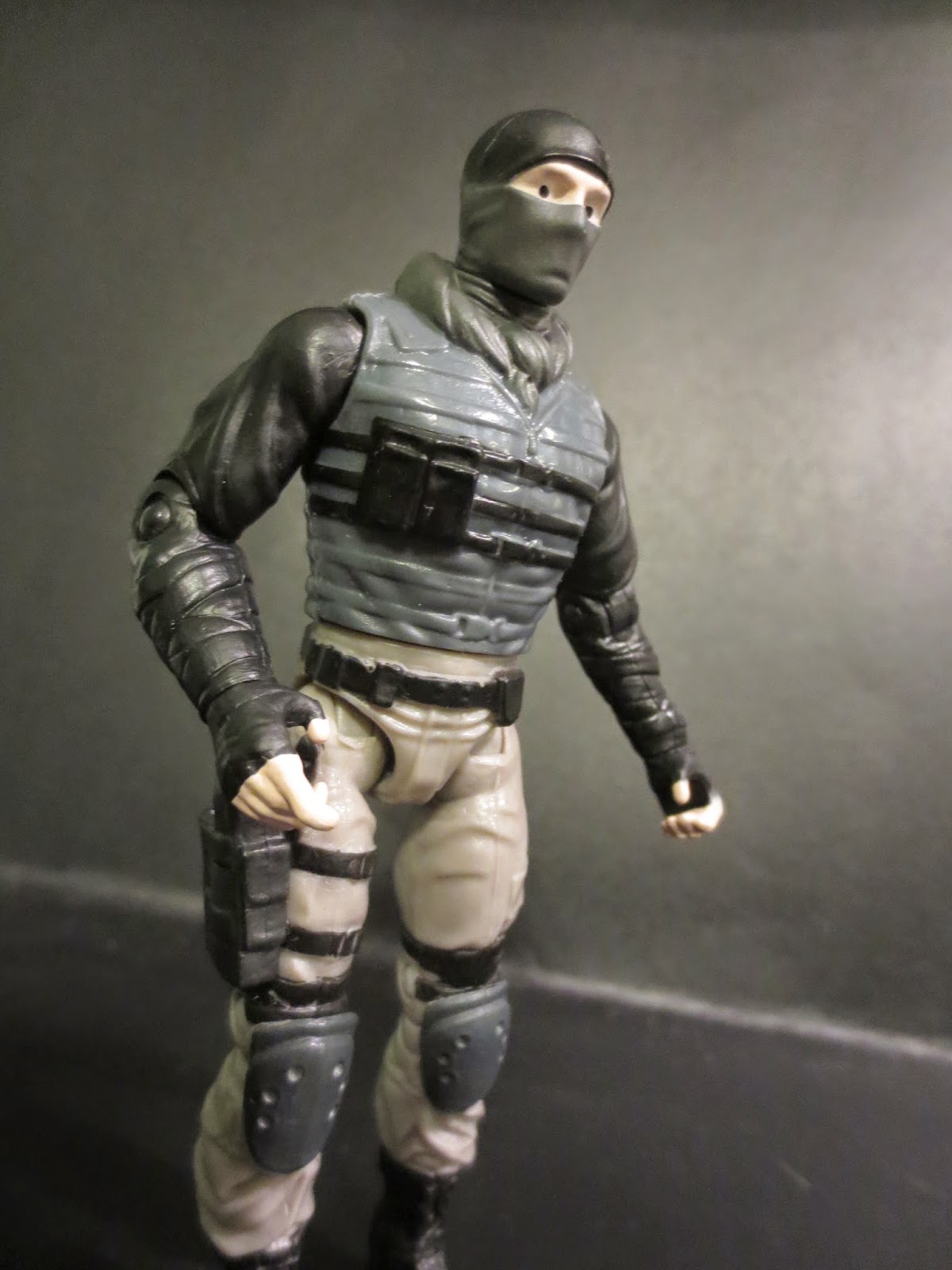 The Foot Soldier has a fair amount of articulation. We're not talking Marvel Legends or G. I. Joe quality, but far better than most other TMNT figures. He features: hinged ankles, hinged knees, swivel/hinge hips, a swivel waist, swivel/hinge shoulders, hinged elbows, swivel wrists, and a swivel neck. While I'd love some bicep swivels or something, for a movie-tie in figure targeted towards kids this guy isn't bad. He also feels rather sturdy, even if his limbs are a bit rubbery. 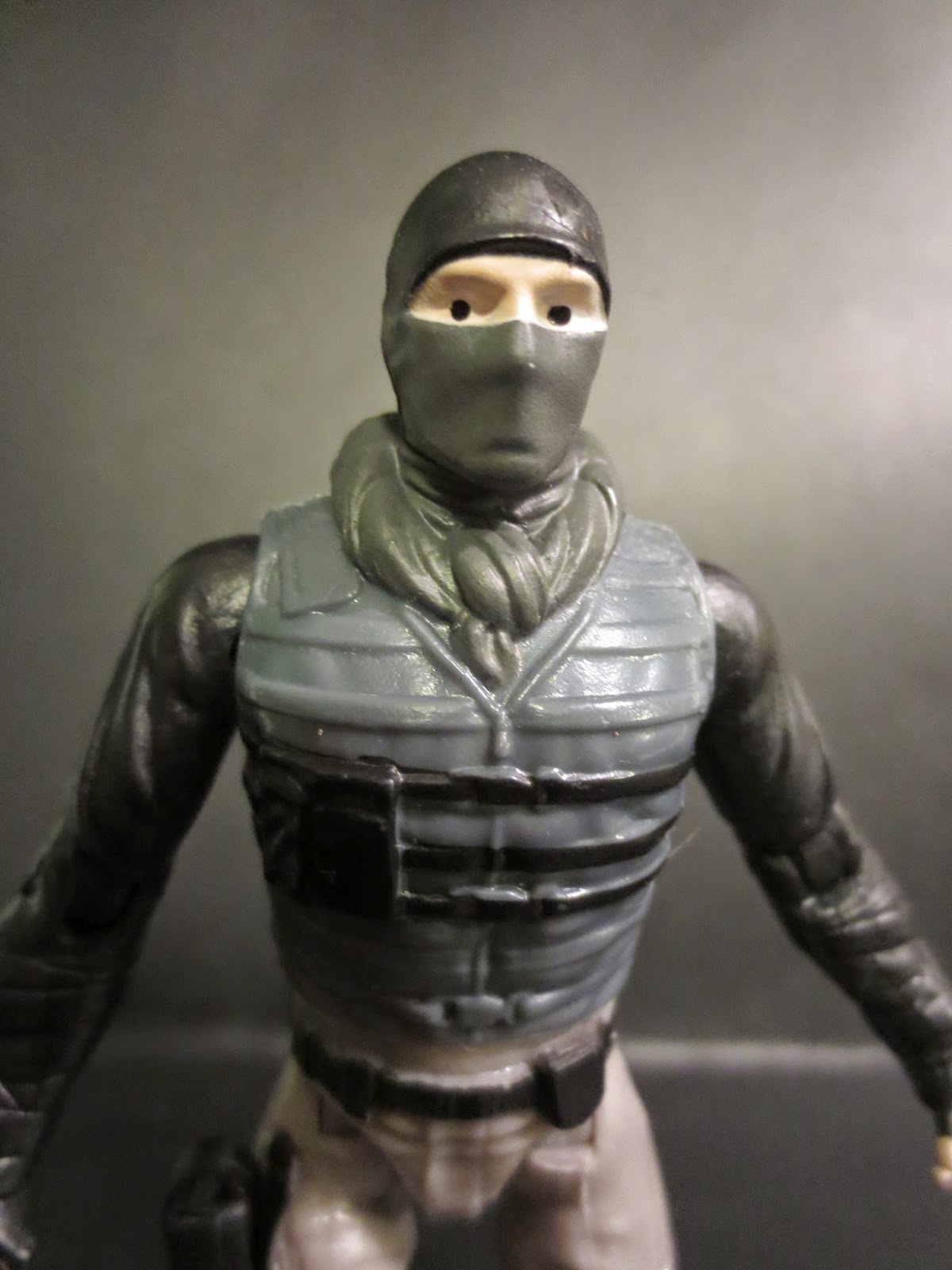 Let's talk about the sculpt here as it is quite a mixed bad. The good? There are some rather nice details here: laces and details on the boots, small holes in the knee pads, and texture on the tactical vest. There's also a functional holster for the Foot Soldier's pistol on his right hip and a sheathe for his knife on his belt. So what's the bad? As I mentioned earlier, there is some really soft sculpting here. Looking at some of the areas like the scarf and the face, you would definitely be justified in feeling like this guy seems rather generic and cheap. If this guy were on the shelf at a dollar store, you might just kind of walk by him without really paying much attention. He doesn't have the same level of coolness or fun that your typical TMNT toys have. 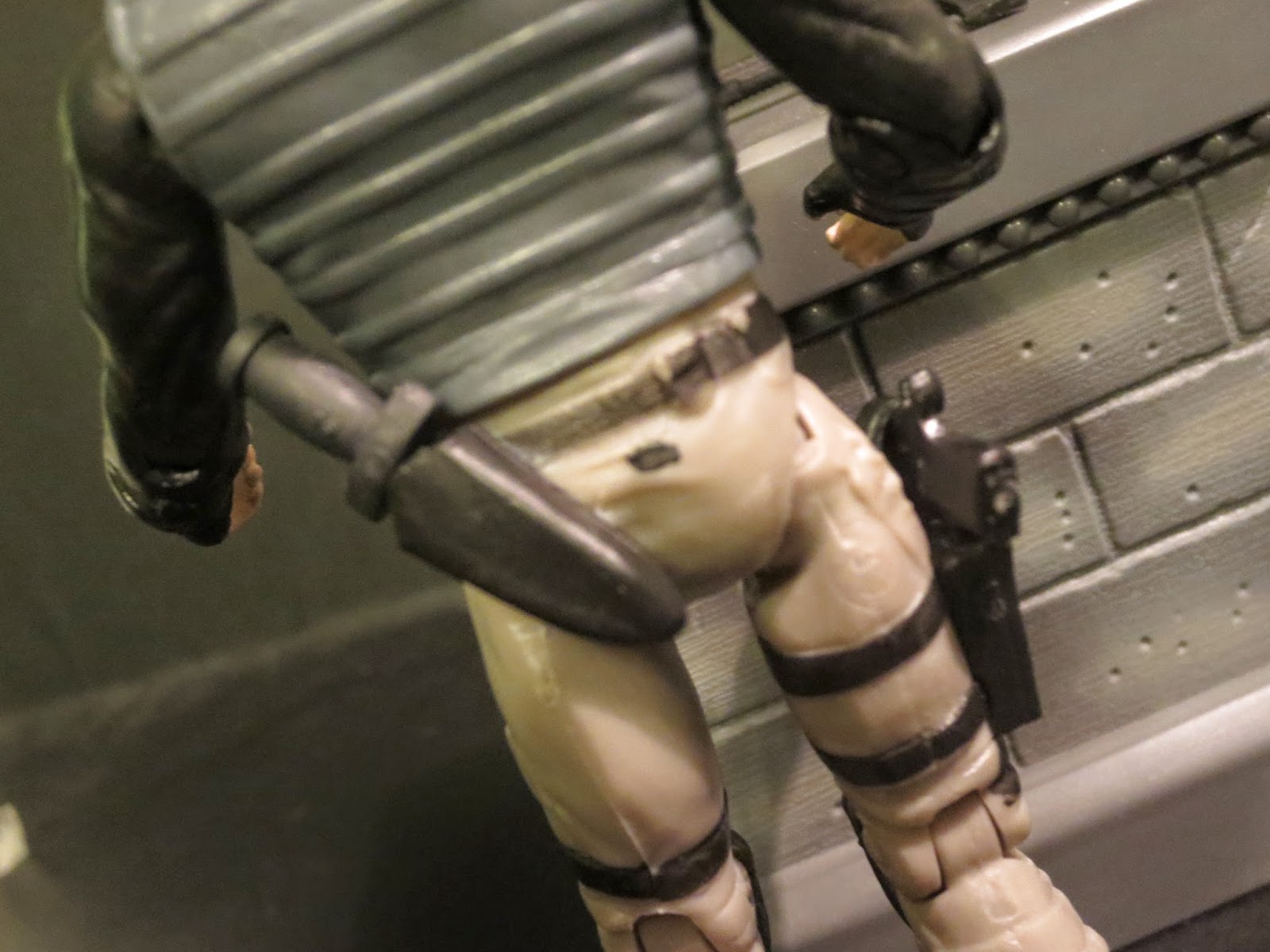 I like the colors chosen for this figure: The tan pants stand out while the mixture of blacks and grays break up the rest of the figure. Initially things look OK as the details like the holster and leg straps, vest straps, and the belt are all separate paint apps. Unfortunately, though, many of these details are only painted on the front of the figure with the back left rather blank. There are also some rough, messy spots like the edges of the knee pads and the spot where the pants tuck into the boots. And those eyes? Yikes! This guy either looks like he is part owl or he is baked out of his mind! Playmates is often weak on their paintwork, particularly on this movie based line. 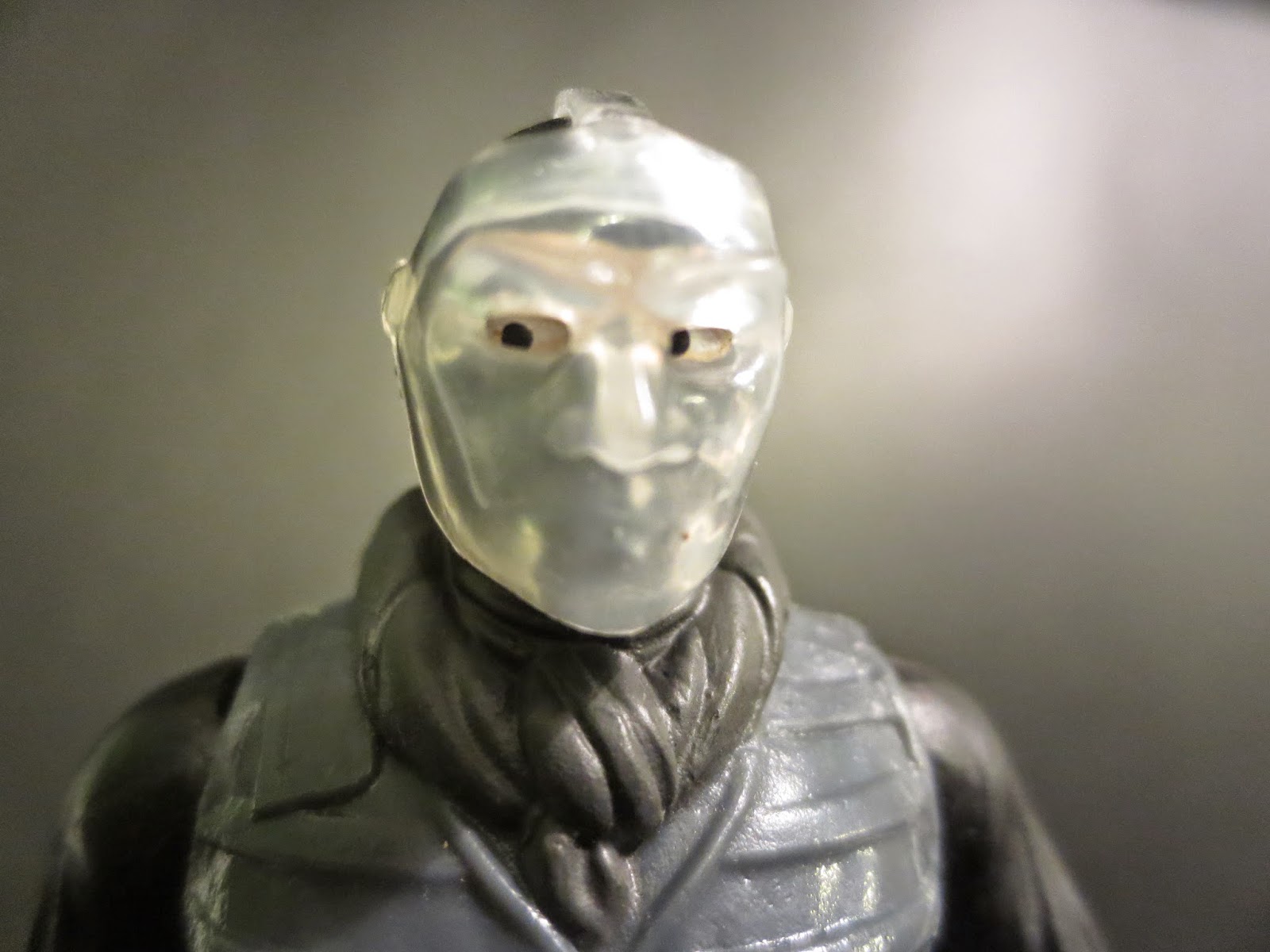 Ready for an area where I can give this figure some genuine praise? He has an awesome accessory compliment! This guy comes with five actual accessories: a rifle, a pistol, a taser, a knife, and a mask. All of the weapons are molded in black plastic and feature some rather sharp details for small accessories. The rifle looks like a standard military styled assault rifle with a suppressor, a banana clip, and a scope on top. I just wish the Foot Soldier has bicep swivels so he could hold it better. The pistol is a cool Desert Eagle that fits in the holster and the knife is a wicked looking little blade that fits in the sheathe on his belt. 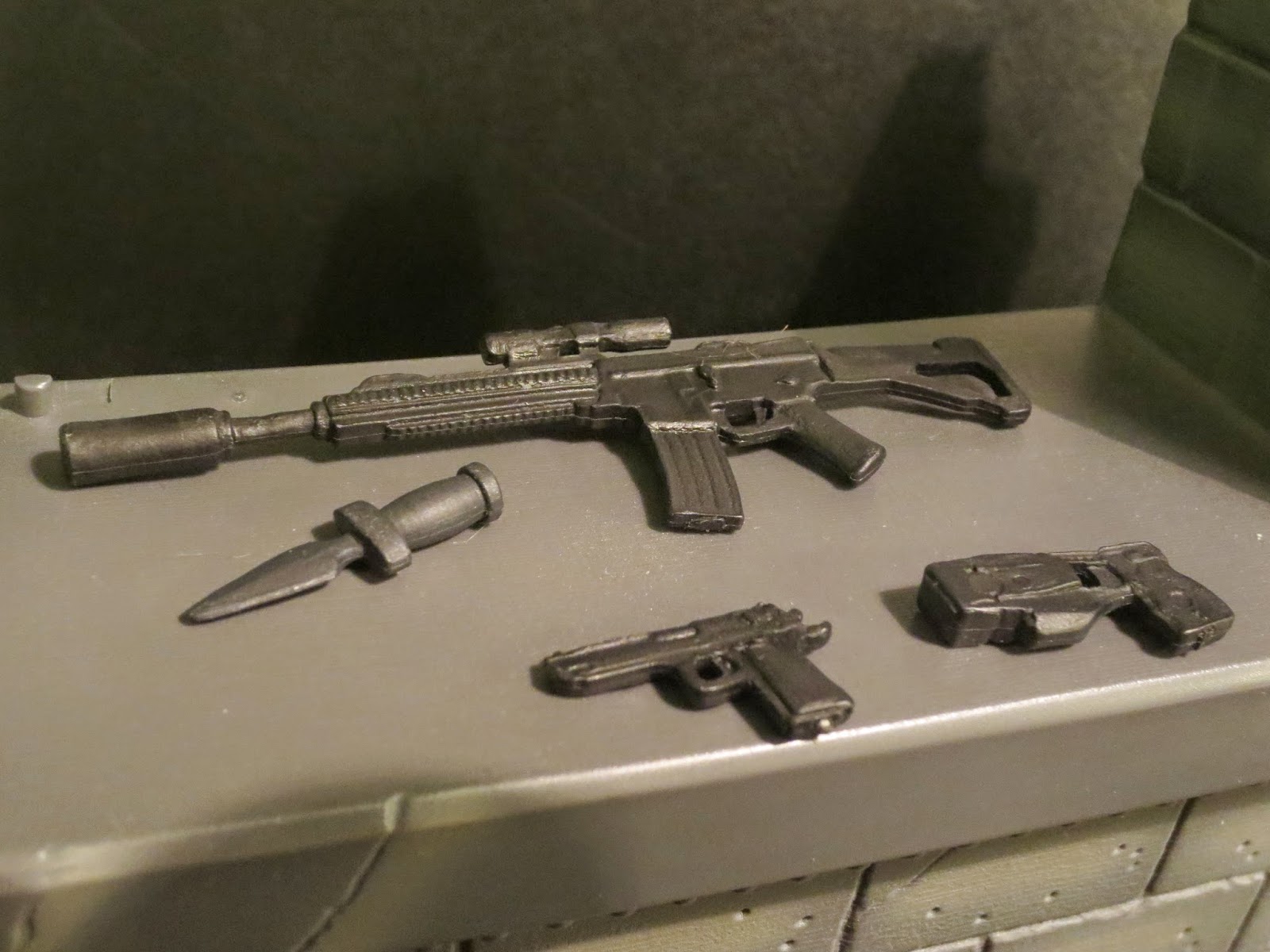 I love the taser! It looks like a law enforcement X-26 model and definitely seems like something that someone encountering the TMNT might be interested in using. Can't you imagine that some corrupt companies and researchers would love to get their hands on a mutant? The last accessory is also rather interesting: a clear plastic facemask that easily fits over his head. I kind of remember the Foot Soldiers in the film wearing these, so it is rather cool as it is one of those masks that obscures facial features like you might see in a horror movie or heist film. Since the Foot Soldier is already wearing a balaclava I'm not sure that it will do him much good, but as it stands it is a neat accessory. 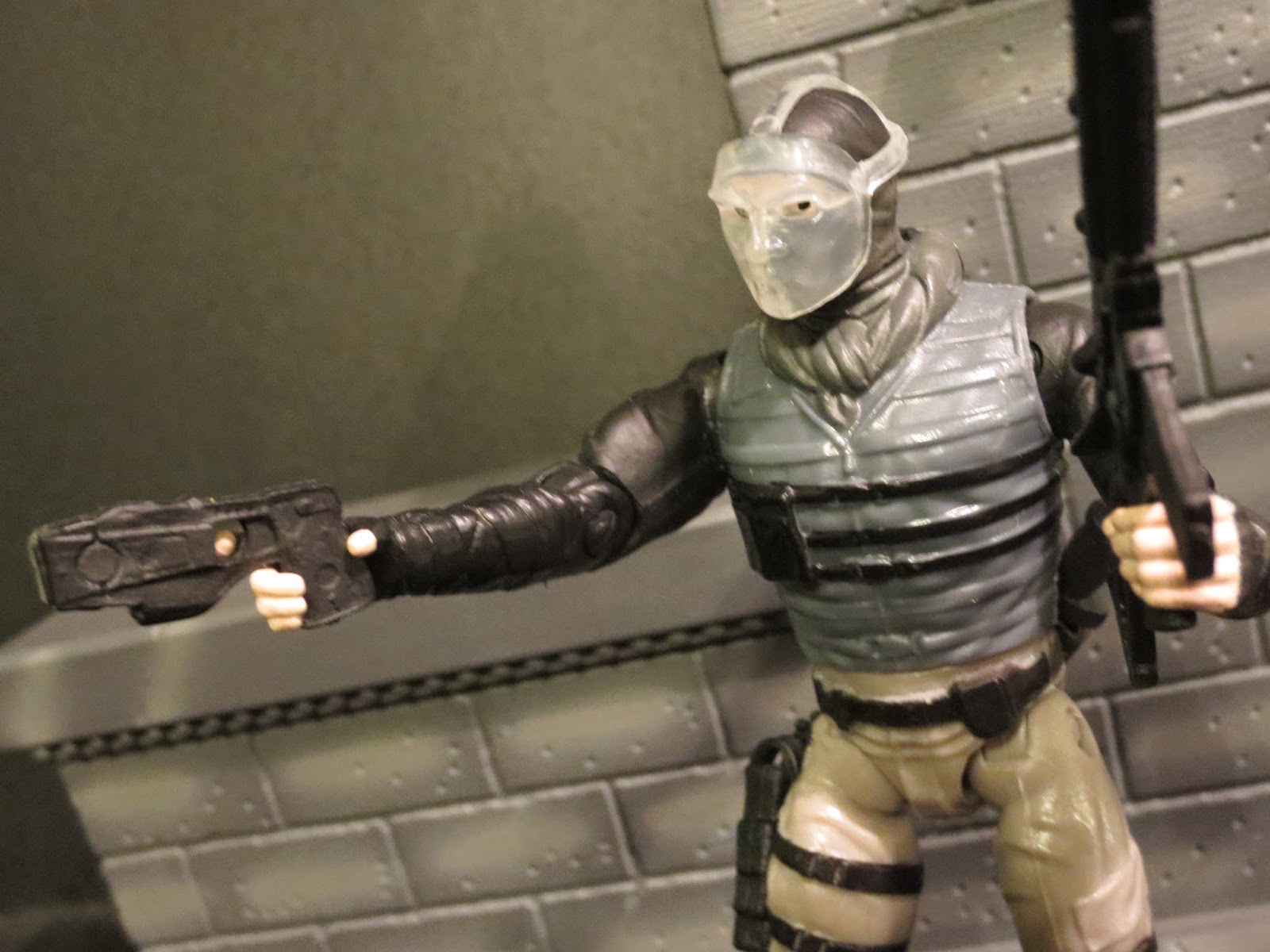 When looking at the TMNT movie figures, I really get the impression that Playmates' two main goal were to get these figures out en masse and to keep them around the $9 price point. At those two goals, Playmates has been pretty successful. While it seems that stores are selling through these figures quite swiftly retailers still seem to be able to keep them in stock and they're fairly inexpensive. When it comes to these being exceptional action figures, however, I don't think Playmates is quite as successful although I will admit that I do like this Foot Soldier figure. I don't like necessarily like him as a Foot Soldier, but I do think he makes a great standard goon for the Nickelodeon TMNT figures. While the paint work and sculpt are somewhat weak, the articulation is a little above average and the accessories are really fun. I'm giving this guy a solid Good. While the movie toys just don't have that spark of fun and energy that the toon based line has, this guy still has a nice amount of accessories to make him fun as a random, generic character. He just isn't a good foot soldier or recognizable as a TMNT figure.

If you're interested in snagging these guys by the case, both Big Bad Toy Store and Entertainment Earth have the case of 16 in stock which includes 1x Shredder, Foot Soldier, Raph in Disguise, April O'Neil, and Splinter, 2x Raphaels, and 3x Donatellos, Leonardos, and Michelangelos.

I've reviewed quite a few TMNT figures from both the Nickelodeon based line and the movie based line:

From the movie line:
Raph in Disguise
The Shredder

And from the Nick line: