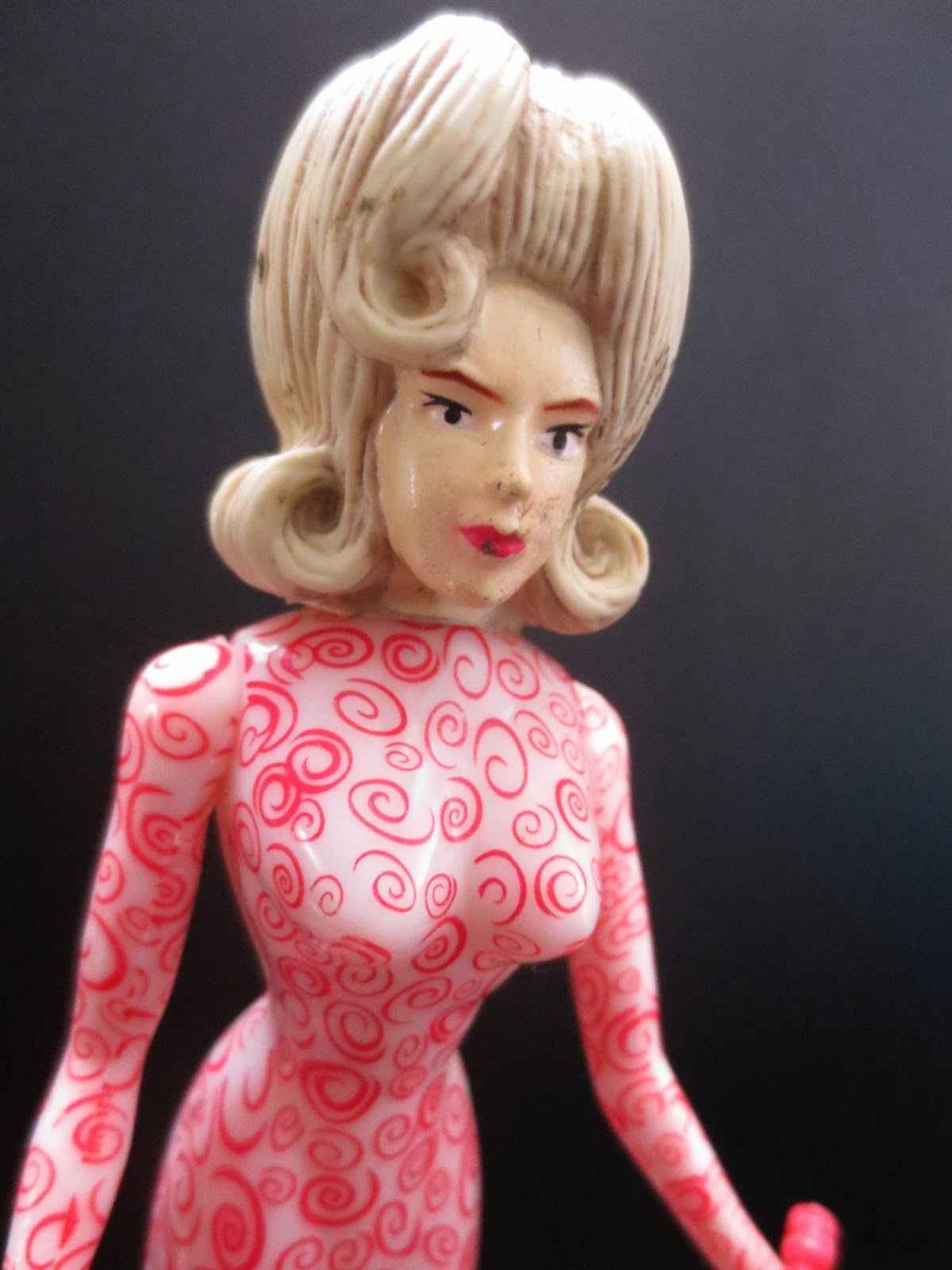 Today's installment of 31 Days of Toy Terror is a catchup for day 19. What's more horrifying than alien invasions? How about dating a green alien? But not a hot green alien like Gamora, Gaila, or Oola. I'm talking one of the little fellows from Mars Attacks! Based on the 1962 trading card series, Tim Burton's 1996 film came out during the height of my youthful sci-fi obsession. It was right after Independence Day and just before The Fifth Element and Men in Black. While the movie was kind of a box office bomb, I loved it and still do. Featuring an insanely talented cast, unique special effects, and a offbeat sense of humor, Mars Attacks! was a gem of a film that deserved better. In 1996 Trendmasters released two toylines to tie in with the film: One that focused on the movie and one that featured character designs from the then contemporary Topps comic book series. Today I'm looking at the Martian Spygirl from the movie based line. Played by Lisa Marie Smith, the Martian Spygirl was one of the most memorable parts of the film. I remember my parents buying this figure for me before Christmas of 1996 so, like any figure owned since childhood, it holds a special place on my toy shelf. Ready for a look at a figure that still remains impressive after almost 20 years? Then join me after the break... 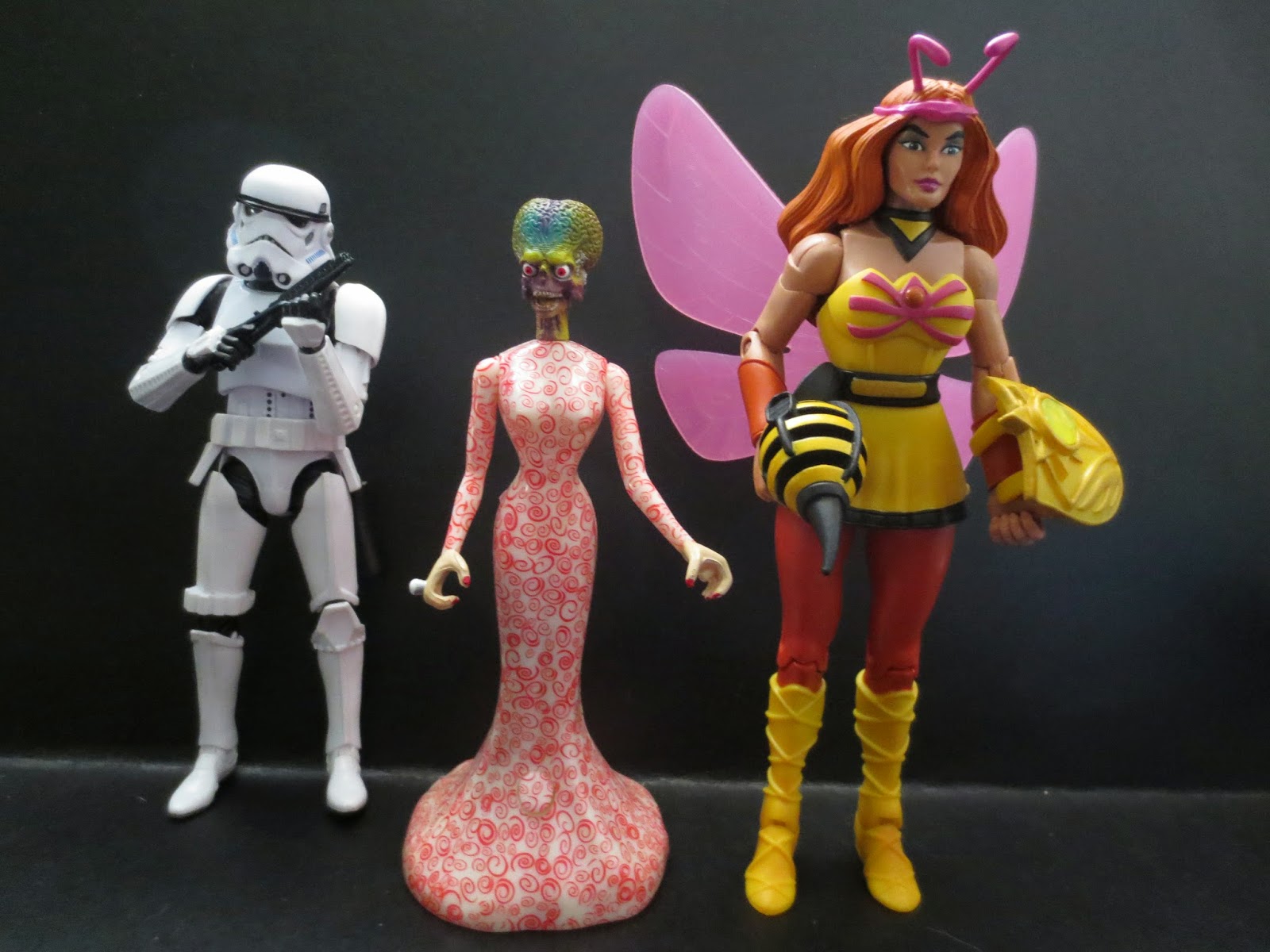 The Mars Attacks! line was all over the place in regards to scale, but the Martian Spygirl stands at 5 3/4 inches tall without her mask. While the other martians in the movie based line were all the same sculpt with different caps and accessories, the Martian Spygirl was completely unique. Although the body might be a bit dated and soft, the head sculpt is quite realistic and really looks very accurate to the film. 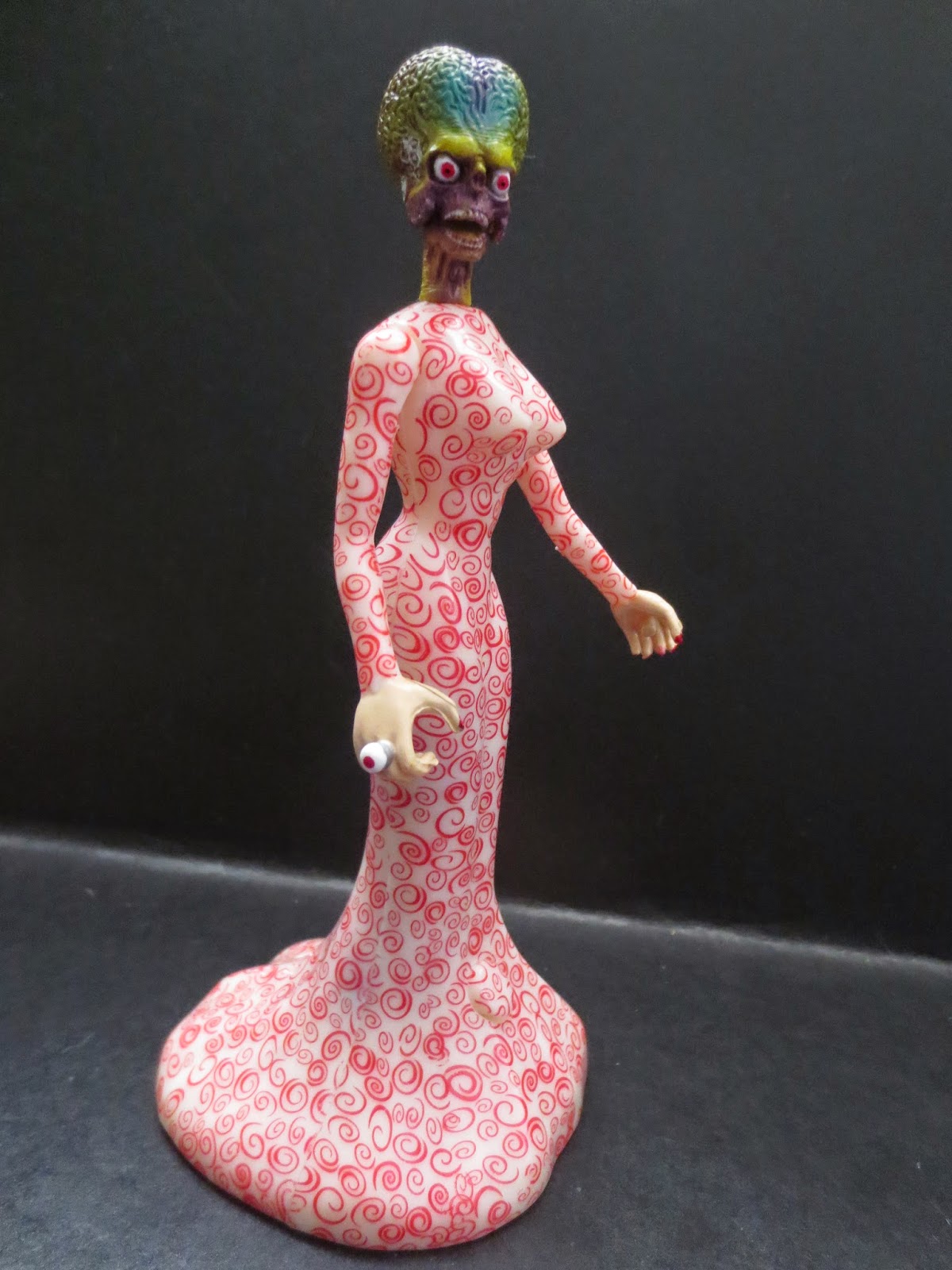 The Martian Spygirl doesn't have a lot of articulation, probably because of the shapely body and the long dress she/he/it is wearing. The figure has swivel shoulders and a swivel neck. One of the cool things about the figure is that it talks and says two phrases. When you press a button on the bottom of the dress front you'll hear a weird little snippet of martian chatter followed by "Trust me." not only is this a fun feature but it still works. Yes, this is the original battery from when I first got this toy back in 1996. Color me impressed. 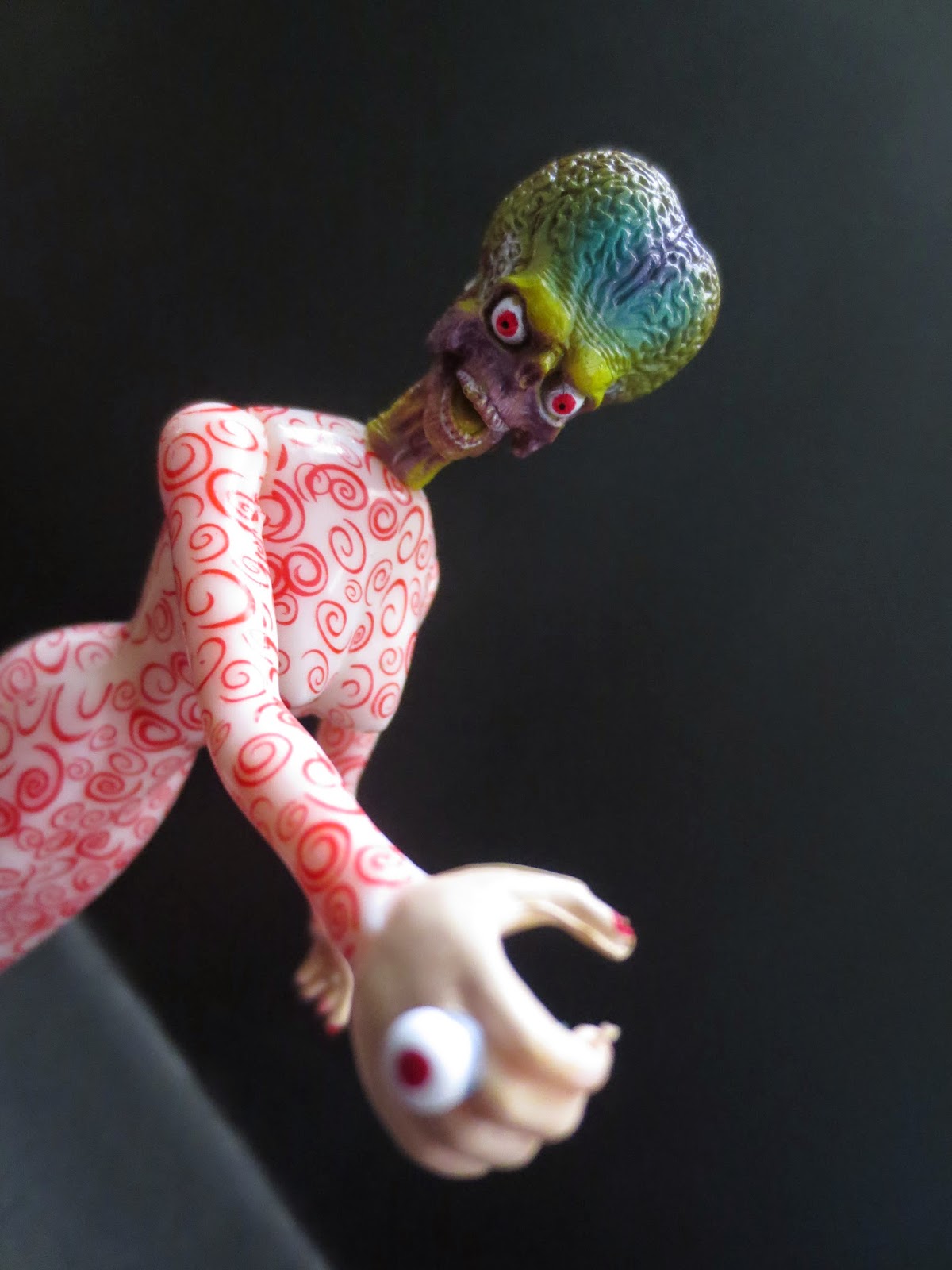 The sculpt has two key areas: The body and the head. Let's start with the body. The body is quite simple but perfectly captures the shapely hourglass figure of Lisa Marie as the Martian Spygirl. The hands are rather simple, but of course they were designed around 20 years ago, were sculpted to hold accessories, and feature the small eyeball spy ring. Not bad, at all. The headsculpt, though, is incredibly impressive. Trendmasters put a lot of time and effort into getting this right. It's quite frightening and features some great detail on the brainy cranium, bulbous eyes, and skeleton like mouth. Just impressive stuff, even by today's standards. 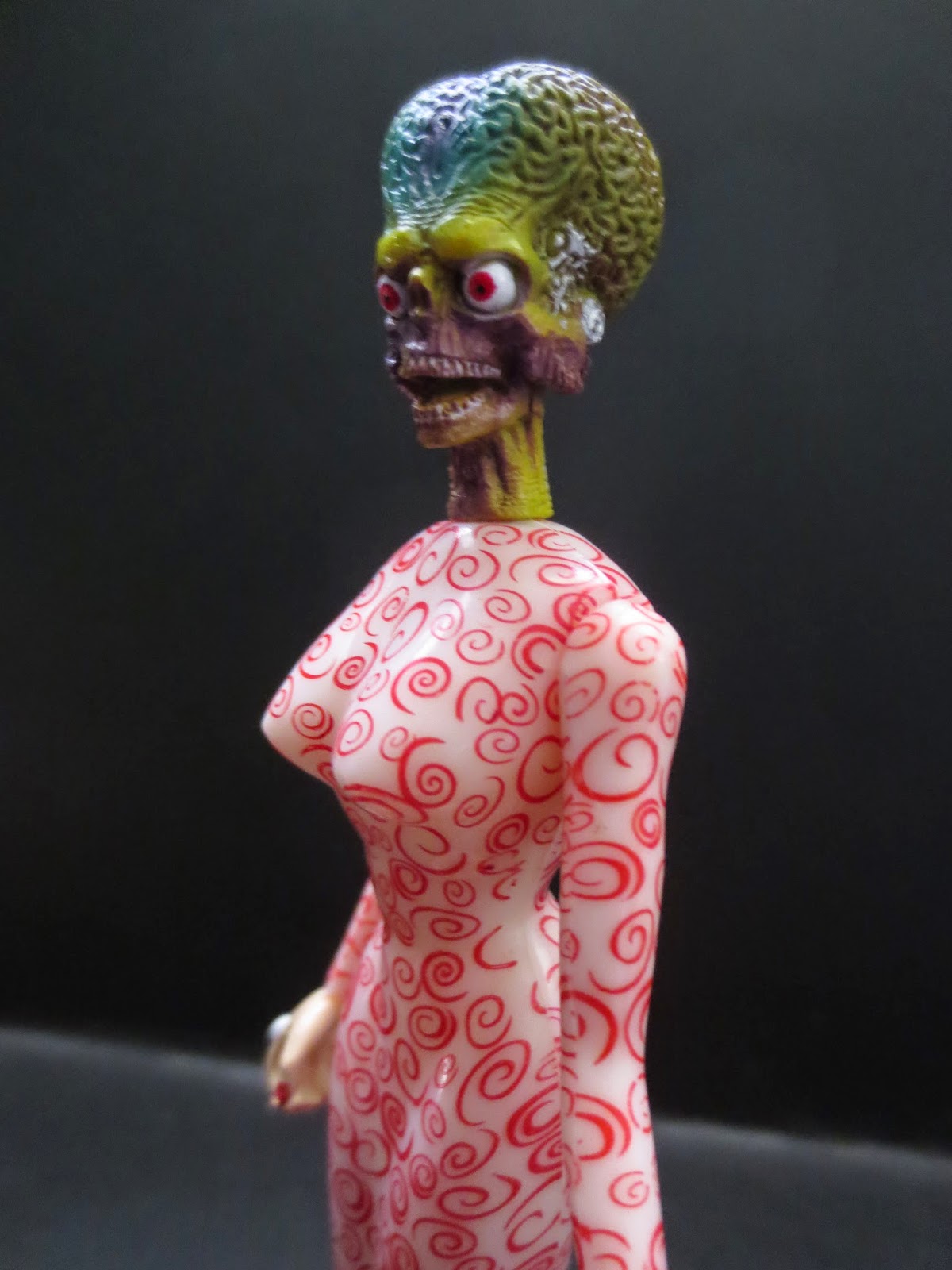 The paint is also quite good. The dress features a pretty good replication of the film dresses bizarre pattern. It is incredibly neat and clean. The fingernails are red, the eyeball ring features three paint hits, and the head is just fantastic. Look at how they swirled the various shades of green with the blue and purple to capture the martians' unique complexions. I mean, this kind of paint work (with a dark brown wash in some areas) is actually better than a lot of what we see today. I love talking about toys like this that really stand the test of time. 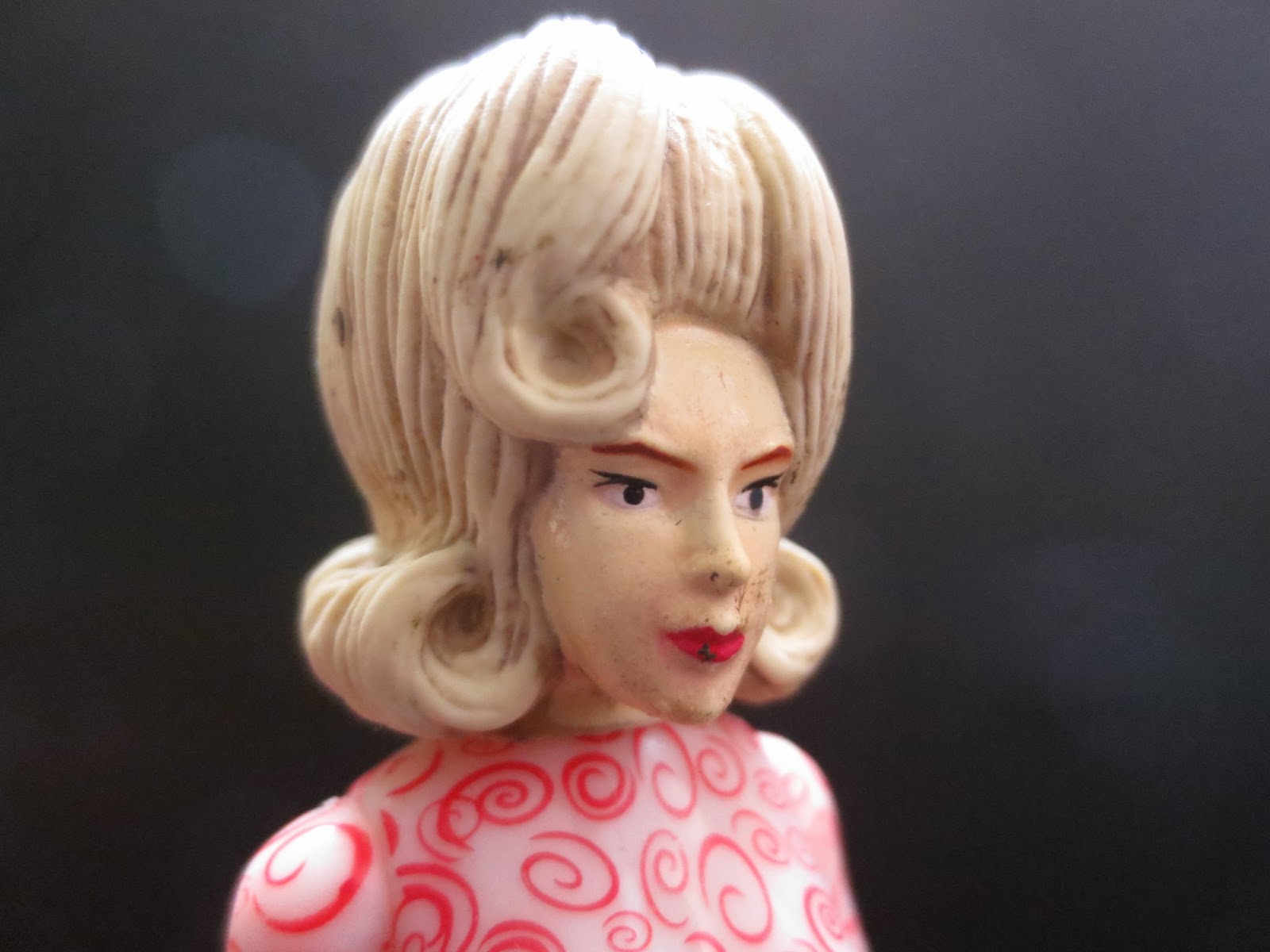 This figure has an excellent sculpt, superb paintwork, and a still functioning voice chip. What could make it any better? How about multiple, excellent accessories. The Martian Spygirl comes with so much stuff: A rubber disguise mask, a purse, a pistol, a missile launcher with two missiles, and a role play spy ring. Holy snap! That's more accessories than nearly any "High End Collector's Figure" on the market today! The mask is the most significant, so we'll talk about it first. It's a rubbery piece (kind of like the Mission: Impossible action figures cam with) that easily slips over the Spygirl's head. It looks pretty good and features the bizarre hairdo and everything. Yeah, it's a bit soft (I'd love to see someone like Mezco or NECA tackle this character today) but it works. The paint on mine is a bit funky, but I've also played with this and toted it around for years. 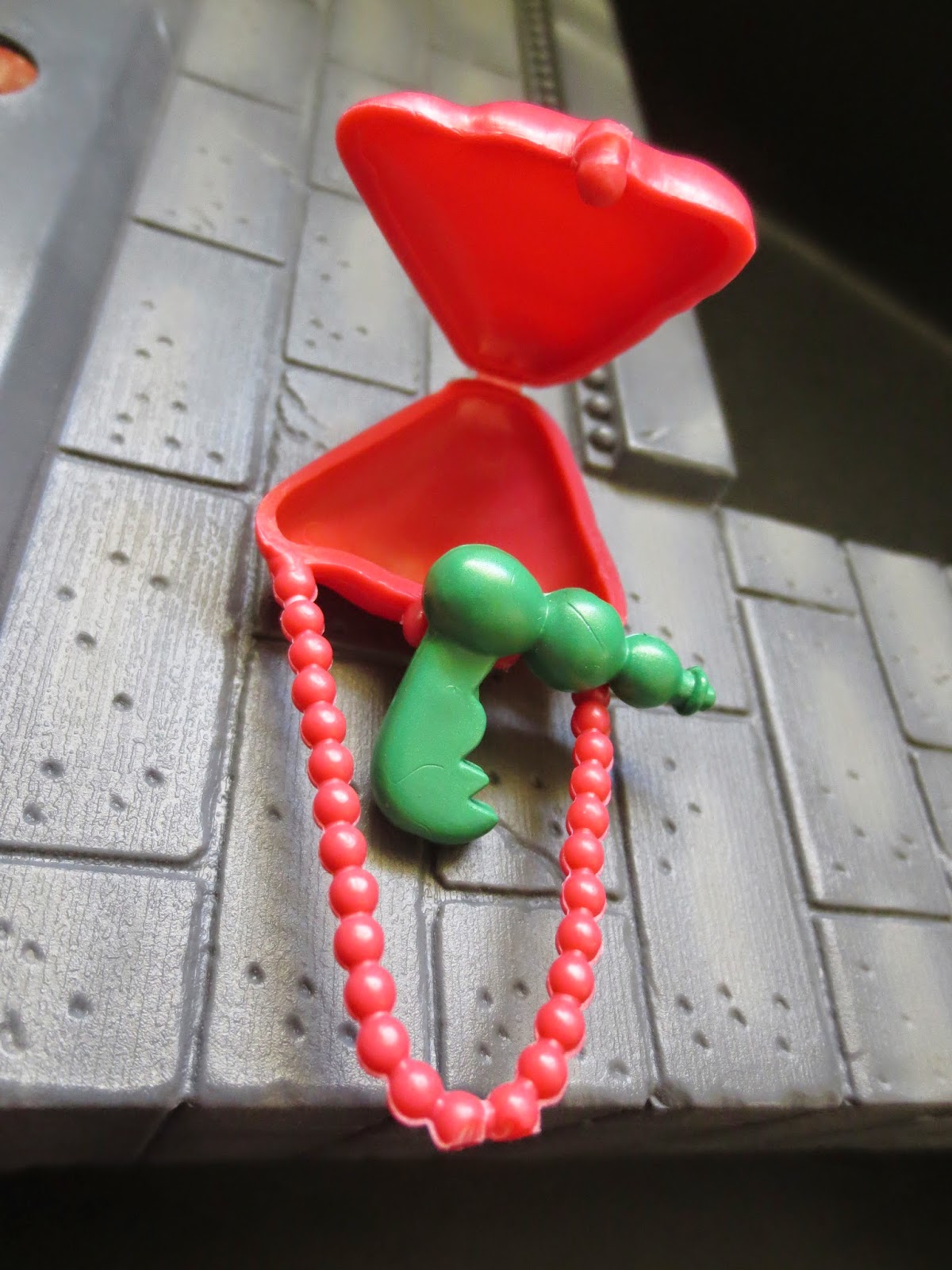 The next thing I'll look at is the pistol and purse. These are the simplest accessories, but they're still pretty neat. The pistol attaches to the Spygirl's hand via a peg or can be stored in her purse. The purse is a little oversized and doesn't really want to stay on the figure's shoulder, but it does open to hold the pistol. Neat feature, really. 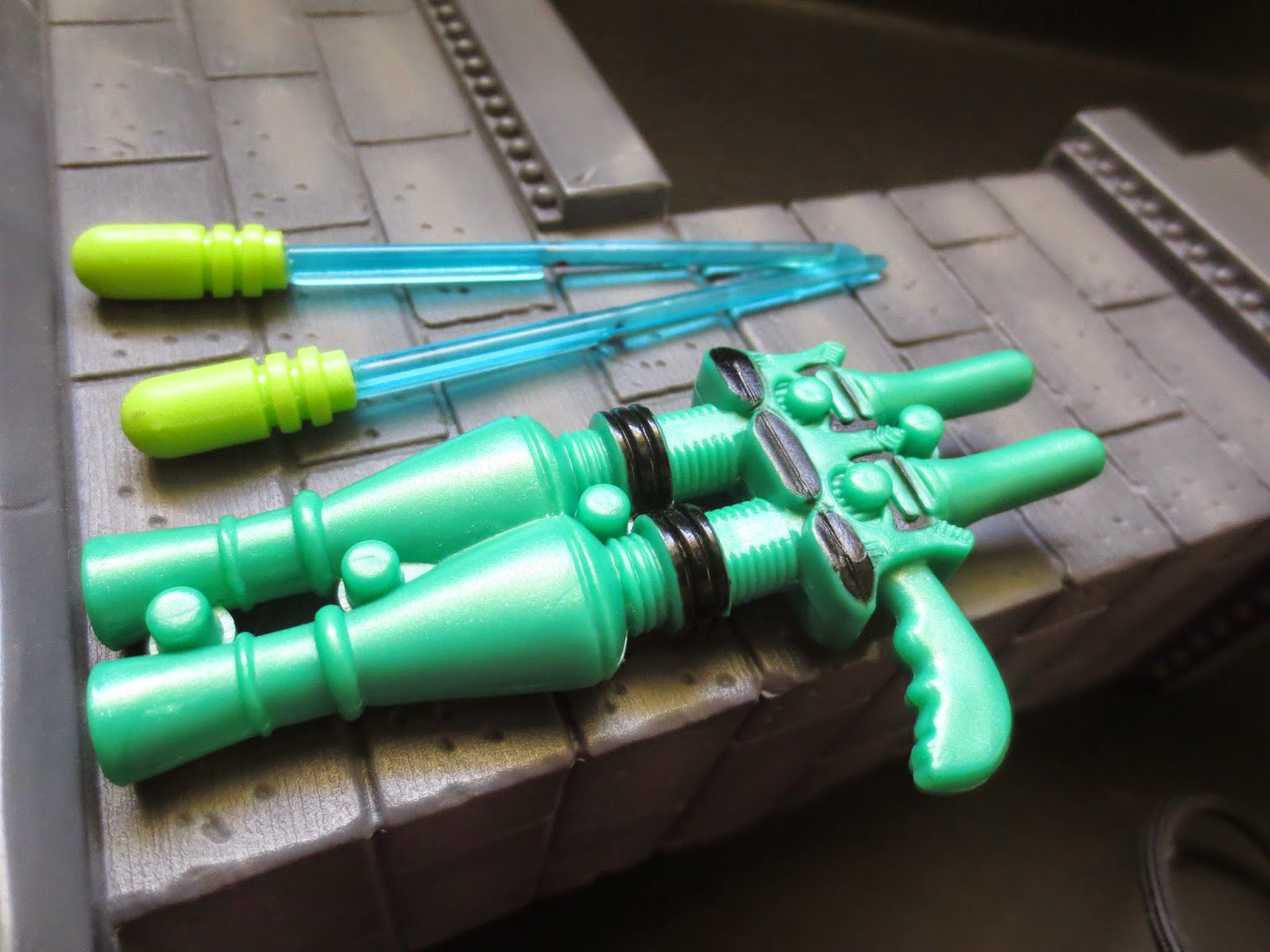 The next accessory is called a "Freeze Ray Blaster" and is a large green and black rifle that fires two missiles. Mine still works insanely well and propels the included translucent blue and green missiles an insane distance. Surprisingly, the Martian Spygirl has no trouble holding the cannon in her right hand. 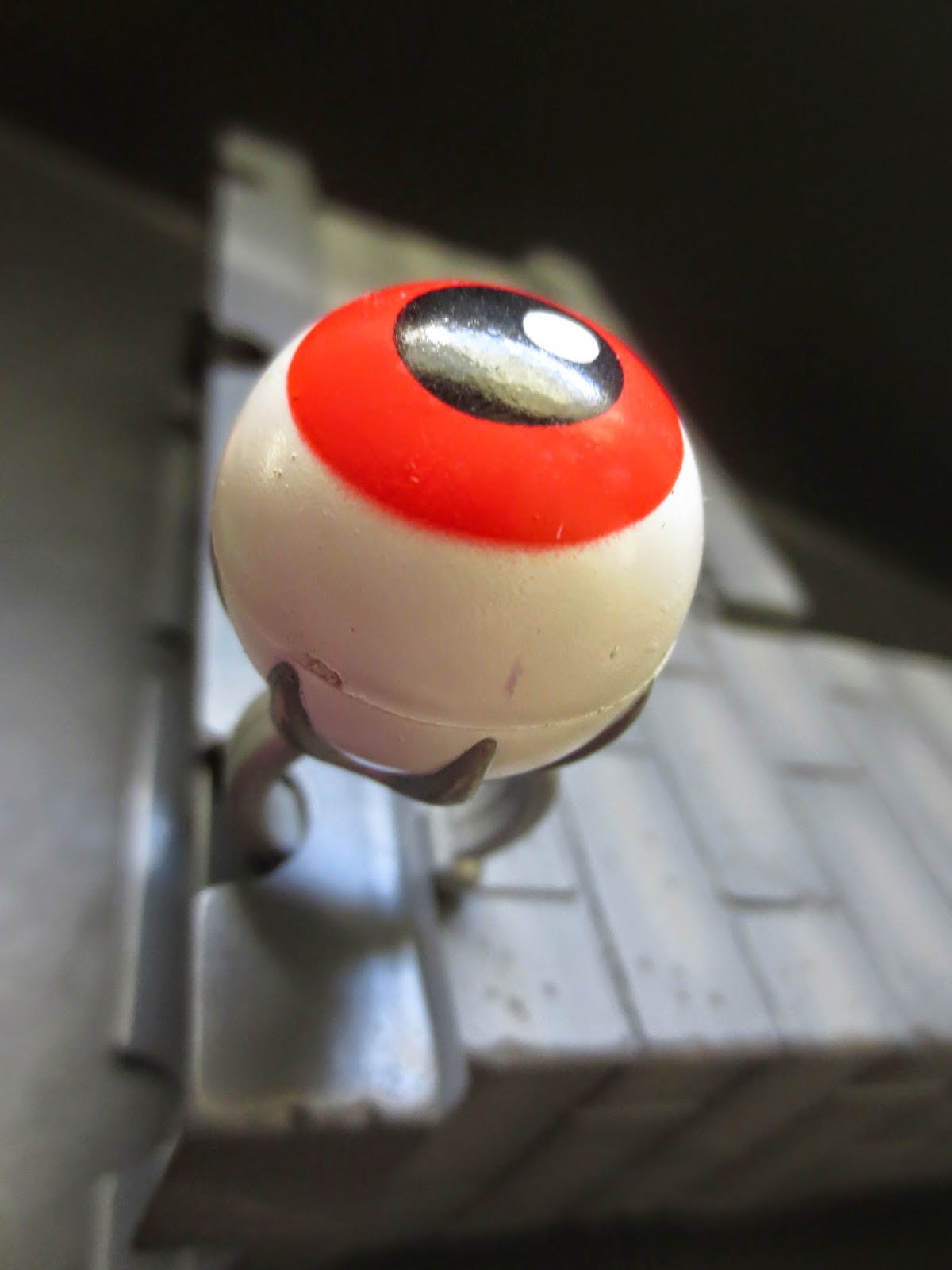 Last, but not least, is the roleplay replica spy ring. It is a plastic ring that features a giant plastic eyeball. It still fits me and is just such a cool inclusion. I honestly don't feel like any toy company out there today would put as much thought and care into a toy as to include something this cool with a modern action figure. Heck, Mattel would probably charge $20 for this "high end prop replica" if they were selling it by itself. 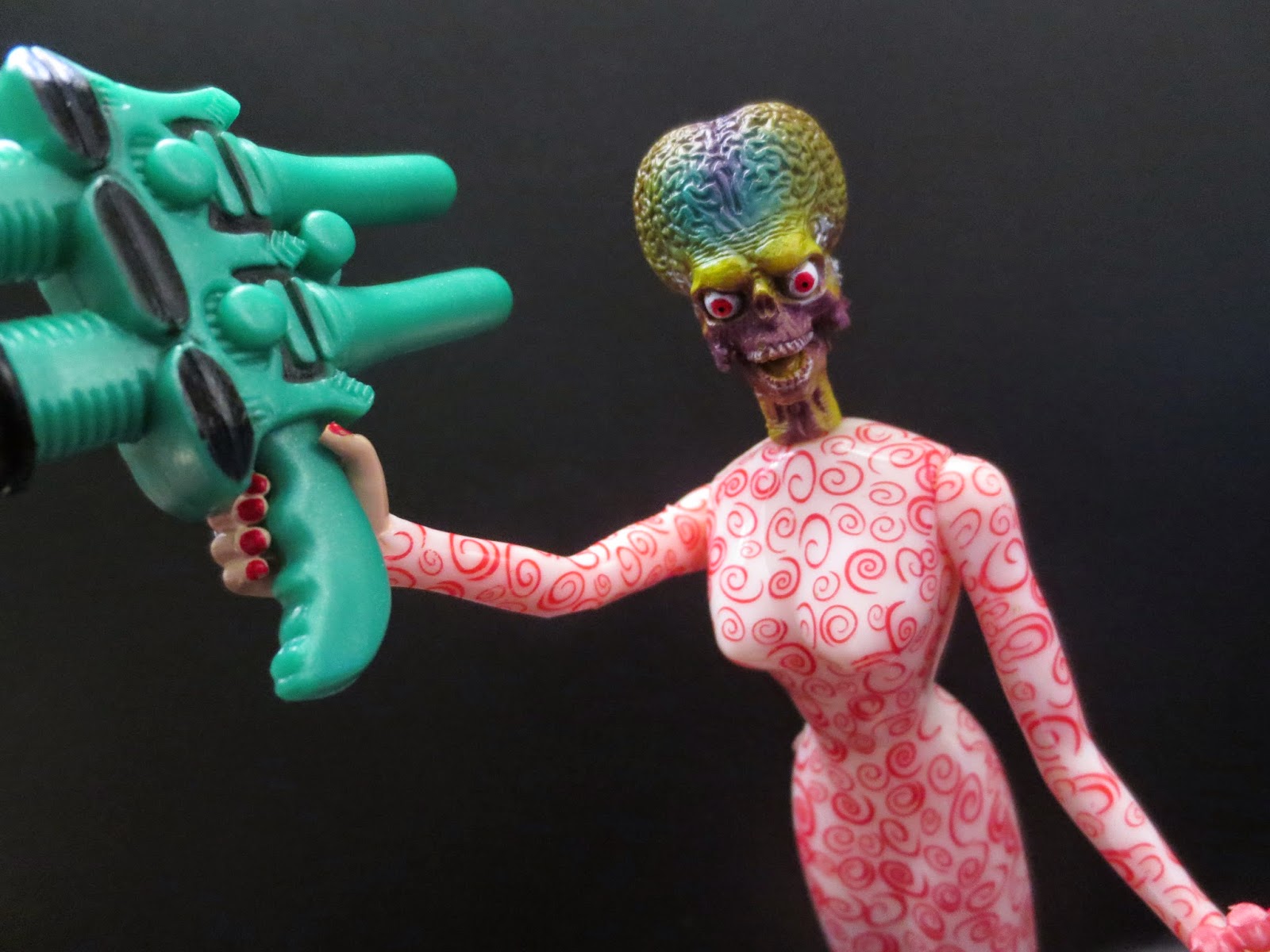 This is truly an Epic figure, make no bones about it. When action features, sculpting, paintwork, and the accessories not only hold up after 18 years but surpass most of what is on the shelves today at mainstream retail, you know you have a winner. Trendmasters released a lot of lines from major properties that just kind of fizzled in the mid to late 90s (Godzilla, Independence Day, Extreme Ghostbusters, and Lost in Space come to mind), but their Mars Attacks! work was just head and shoulders above everything else they released. I feel that I need to say little more about this except if you can, track this figure down. It's still awesome and deserves a special place on any horror or sci-fi themed toy shelf. Trust me. 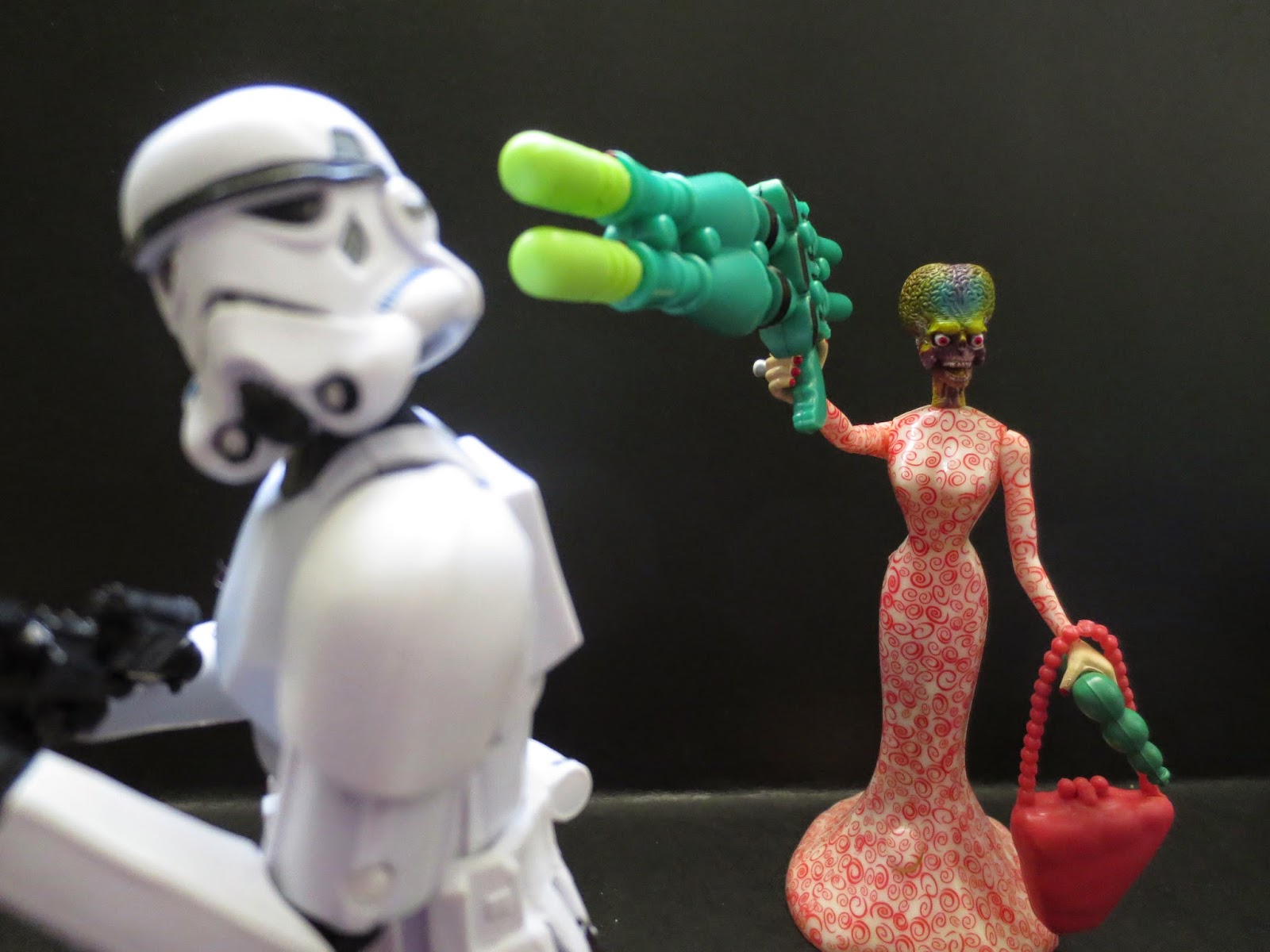