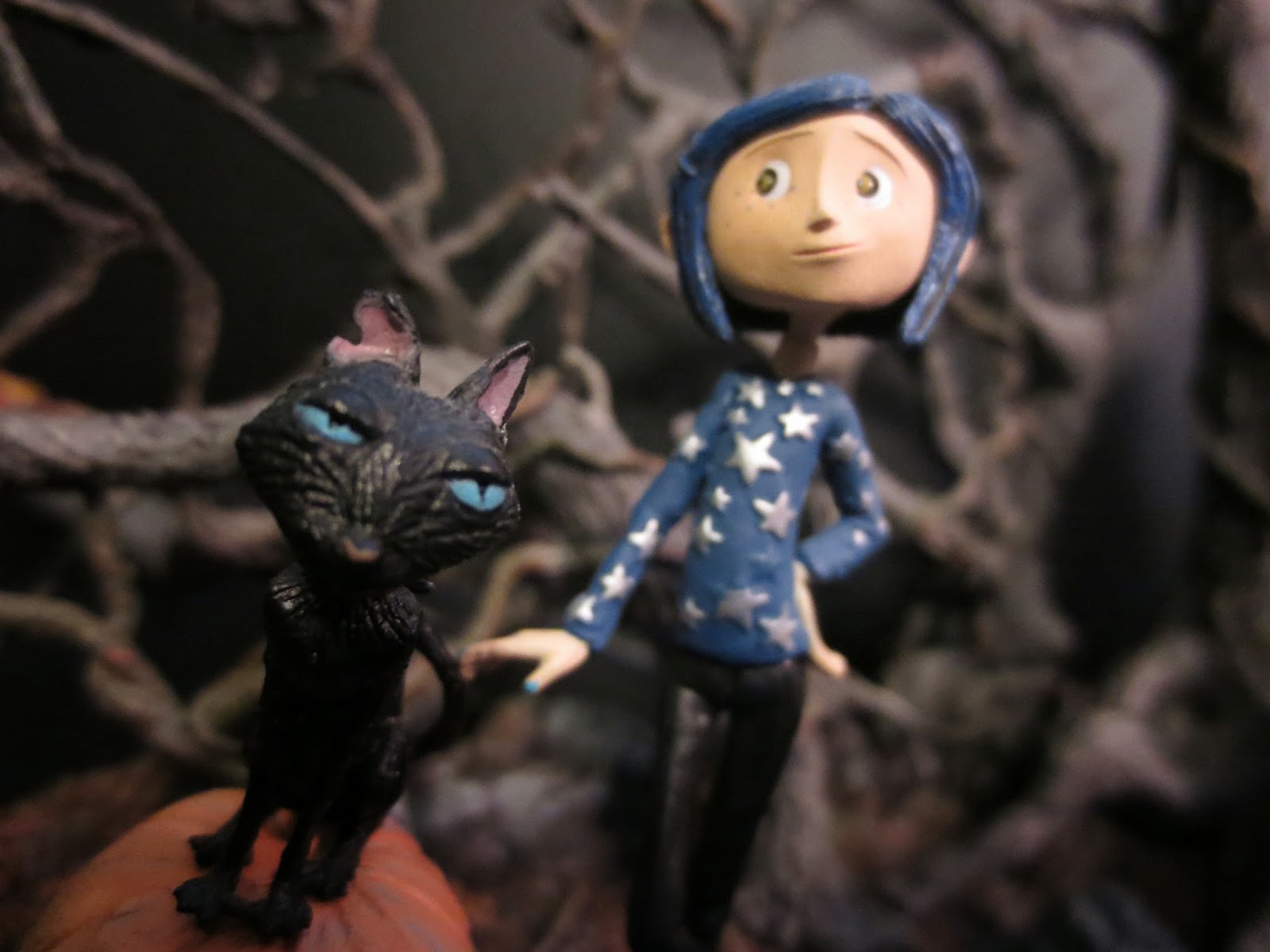 While all of the other terrors we've covered in 31 Days of Toy Terror have been out in the woods, at a rundown carnival, or even in an old opera house, today's terror can be found in your very own home...

I'm a big fan of Henry Selick (the guy who actually directed The Nightmare Before Christmas) and Coraline, the 2009 stop motion animated film based on Neil Gaiman's 2002 novel. It's definitely one of my five favorite animated films as it manages to capture both the wonder and the terror of being a childhood, often doing so simultaneously. Coraline is a wonderful, vibrant heroine who is so full of curiosity and life that you can't help but be drawn in by her adventures. (I really can't wait until my own daughter is old enough to watch and enjoy the film!) My wife is a huge Neil Gaiman fan and when the movie was released I tried to snatch up some of the cooler Coraline products from NECA for her. I should have snagged everything because if you look at Ebay and Amazon prices for many of the NECA dolls and minifigures, you'll see some outrageous prices! Today I'm looking at one of the minifigure sets which includes Coraline in her star sweater, The Other Mother, The Cat, and the ghostly little girl with button eyes from the Other World. Ready for a look at this very cool set from NECA? Then join me after the break... 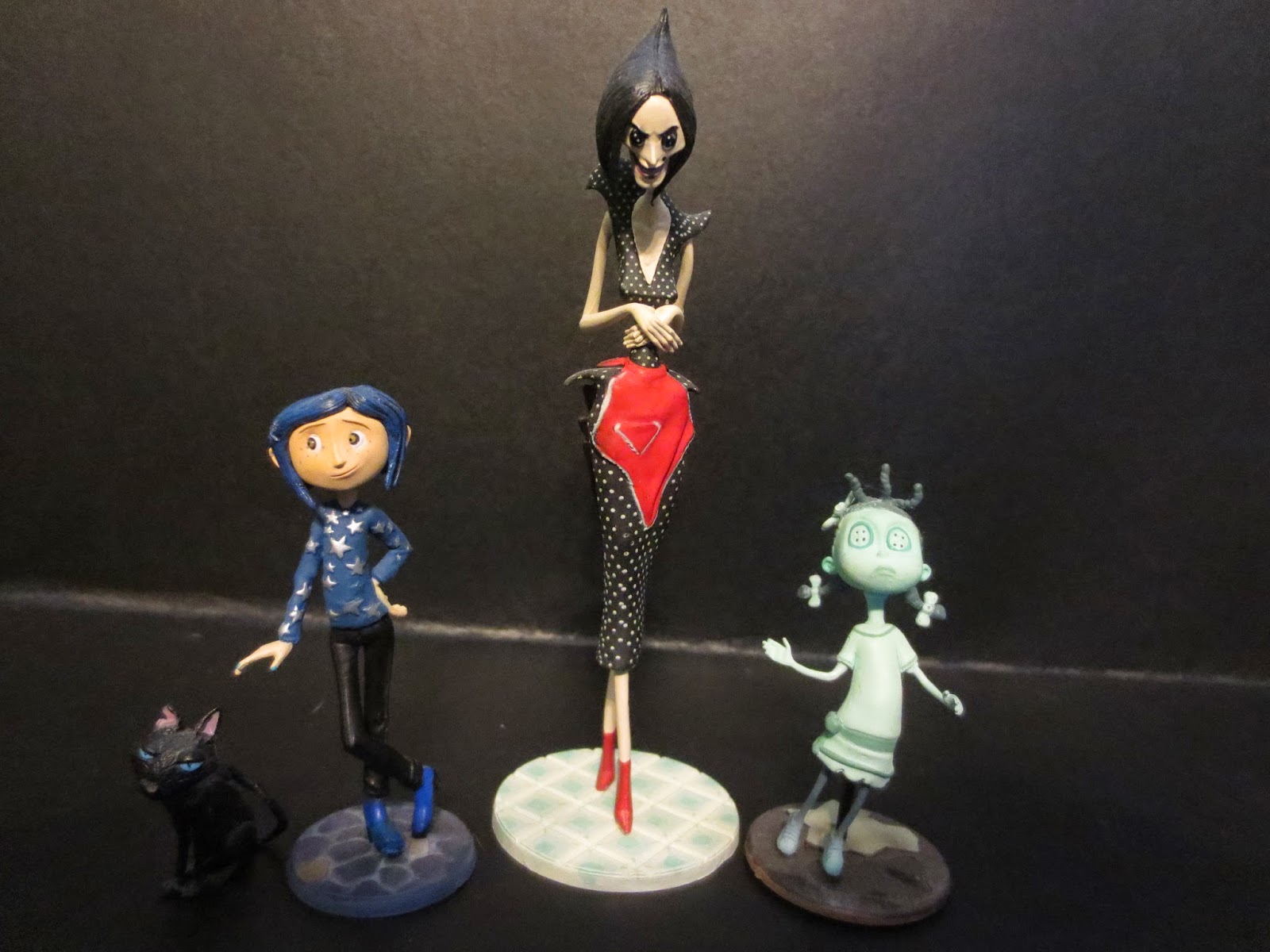 All four figures were packaged together in a window box and stand between 1 1/8 and 5 1/4 inches high. There were three different sets made but they didn't have specific names and are typically identified by which Coraline figure was included. The figures have no articulation and come permanently attached to plastic stands. Due to the spindly nature of the limbs on the characters (particularly on The Other Mother) be really, really careful with these. These seem to be a bit brittle, so be very selective if ordering these sight unseen online. Rather than go through my usual routine of breaking down the categories, I'll be tackling each of these figures individually. How about alphabetically? 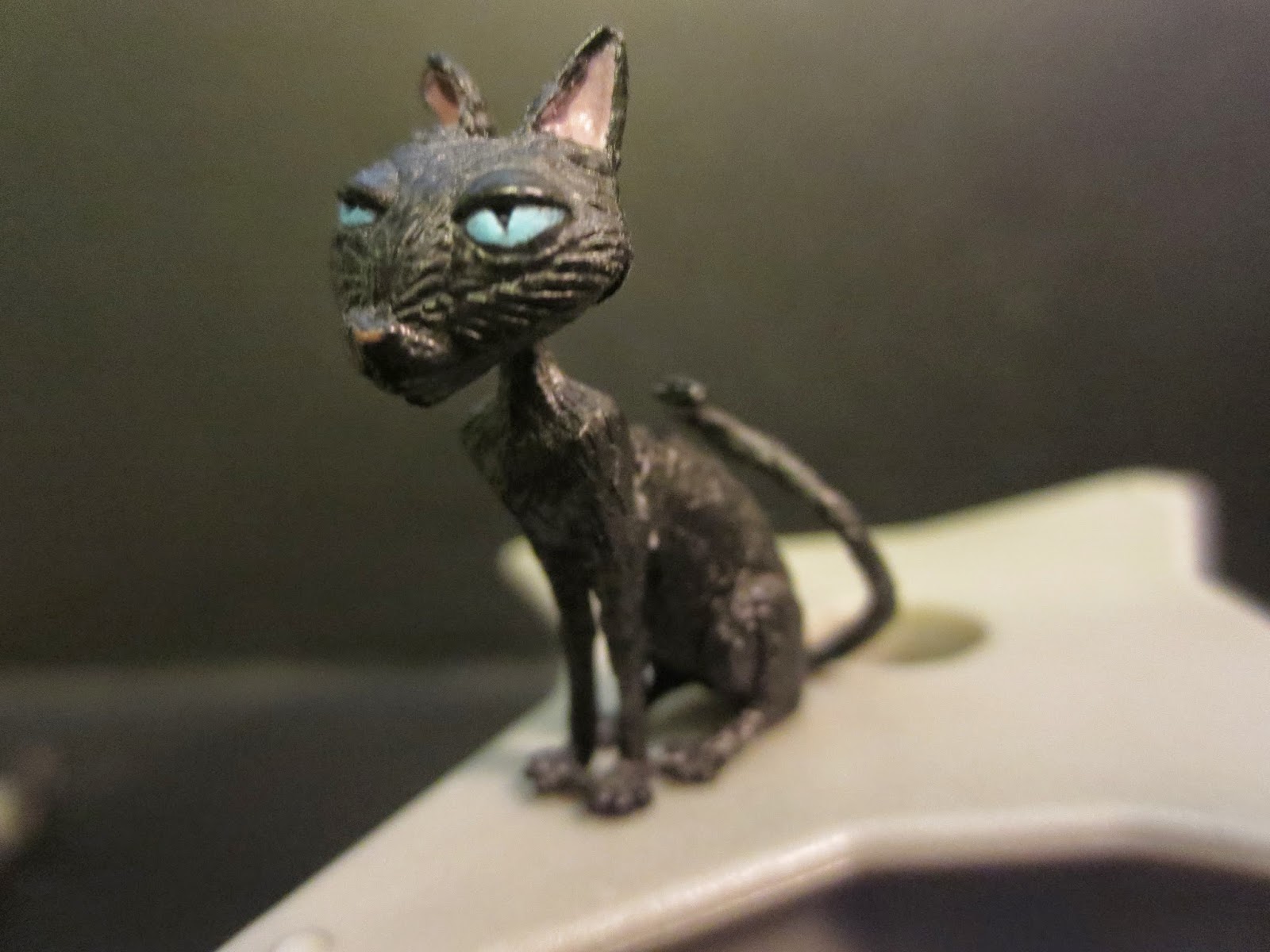 The Cat is a mysterious black cat who guides Coraline on her journey to and from the Other World (think of him as the Virgil to Coraline's Dante). Standing at only 1 and 1/8th inches tall, Cat is the smallest figure in the series, but that doesn't mean he isn't impressive. Featuring some nicely sculpted fur, a sly expression, and a tattered right ear, the Cat is a charming little figure. Rather than offer a new cat sculpt in every set, however, NECA included the same figure in all three. Some variety would have been nice, especially on such a small figure. 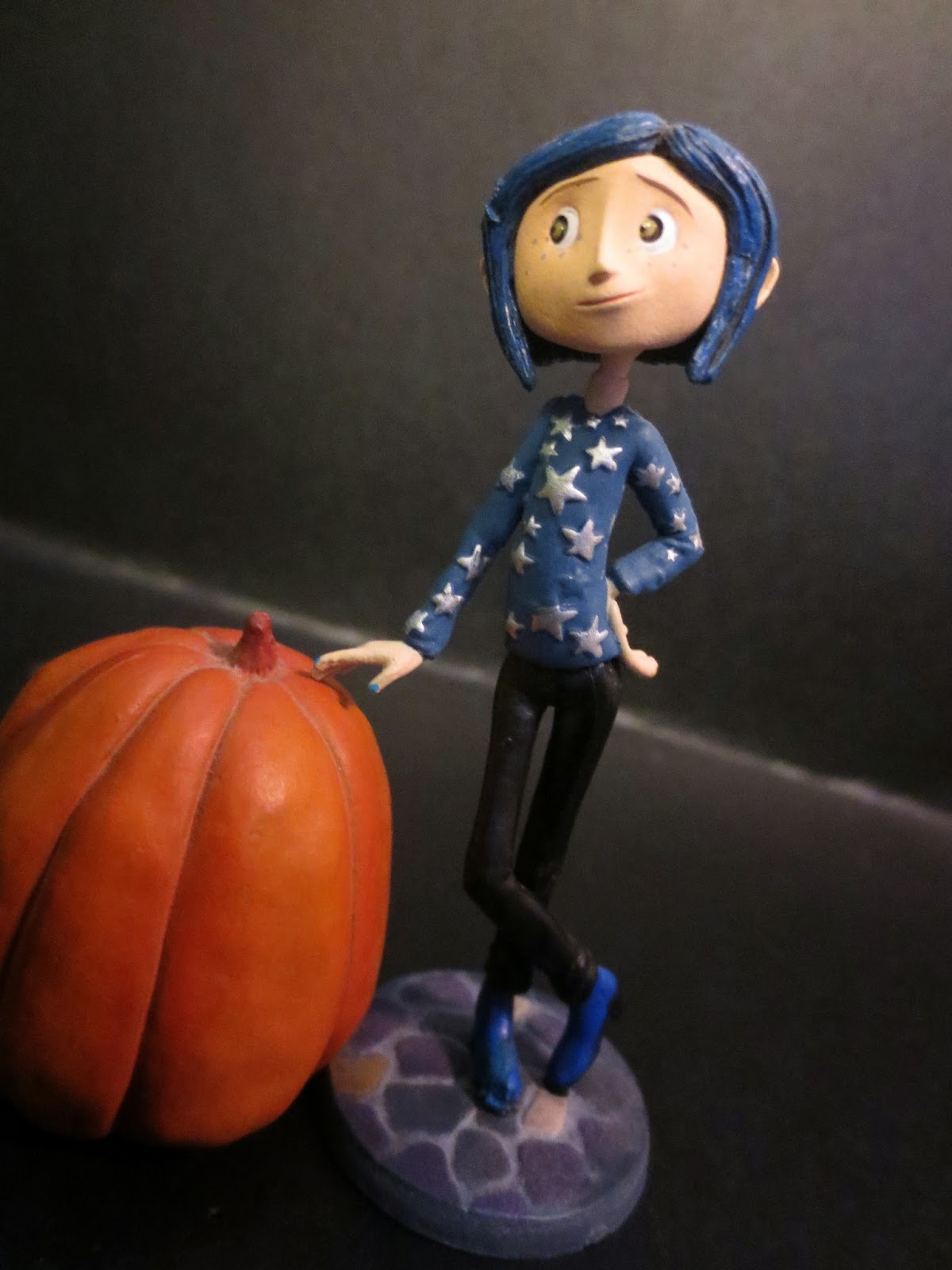 Next up is Coraline Jones, our heroine. Standing right at 3 inches tall Corlaine is a pretty fantastic little figure. Coraline had an amazing wardrobe in the film and here she is wearing her very cool blue sweater covered with silver stars (NECA also released this version of Coraline as an SDCC exclusive in their 8 inch doll set). Along with her super cool wardrobe and her blue hair, one of Coraline's best features are her outrageous facial features. While this one is pretty tame (it is kind of a half grin) it looks great. The pose seems to be Coraline reaching down to pet the Cat, although she doesn't quite reach him. I love her cobblestone base but my figure doesn't seem to be perfectly attached. She's solidly affixed, but the parts just are not flush. There is also a little bit of blue showing through the flesh tone of her hands. Still, for a 3 inch figure this is pretty cool. 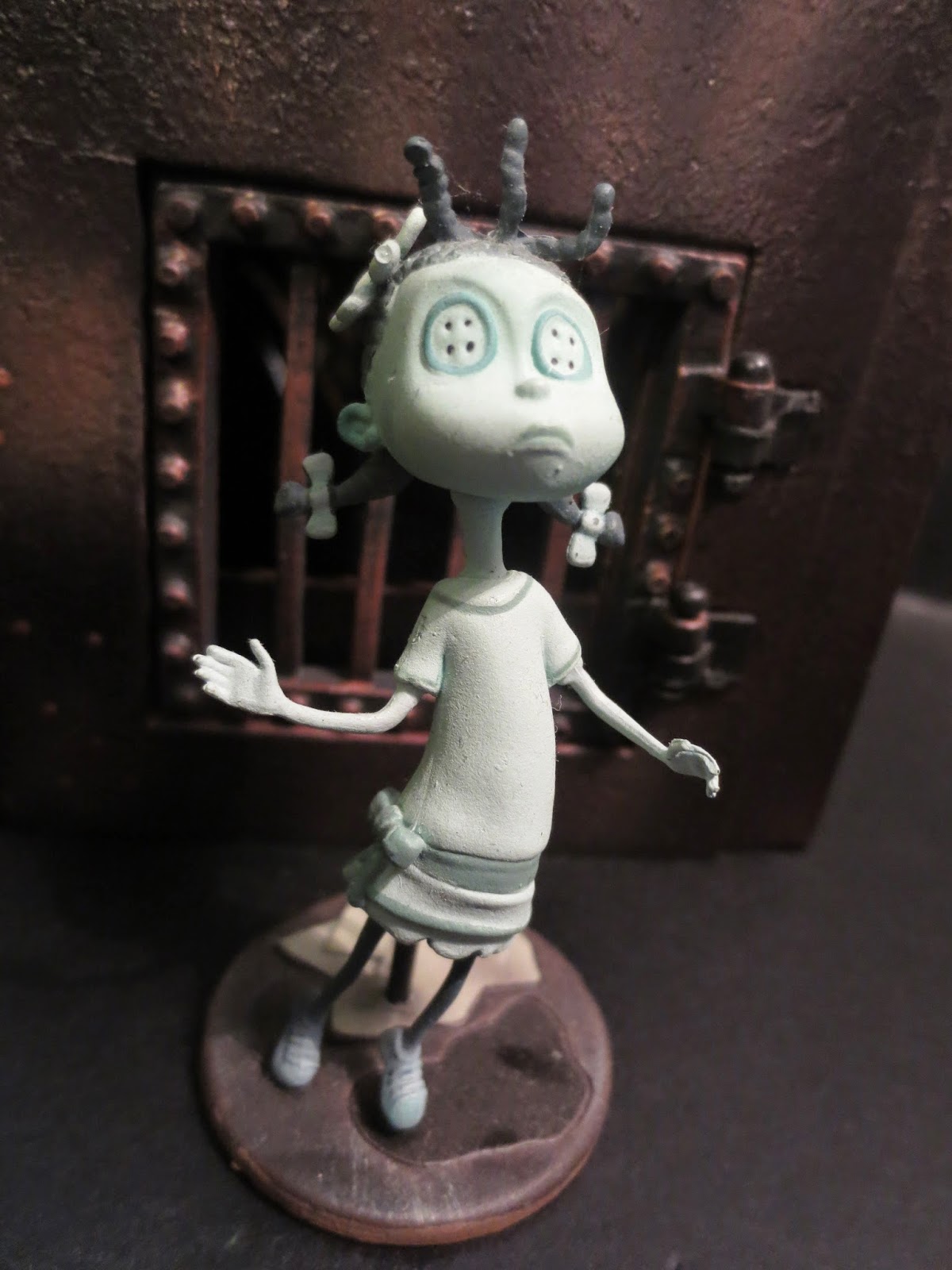 Each of the boxed sets comes with one of the ghost children from Coraline. This set comes with the little ghost girl with pigtails and a flower in her hair. To help give her a more haunting and ethereal quality, not only is she painted in a mix of greens and blues but she is held to her base by a thin plastic rod. This gives her the allusion of floating along the ground rather than walking. The sculpting is great here: Even tiny little details like the holes in her button eyes, the laces on her shoes, and each individual finger are individually sculpted. That is impressive work on a 2 1/2 inch tall figure! 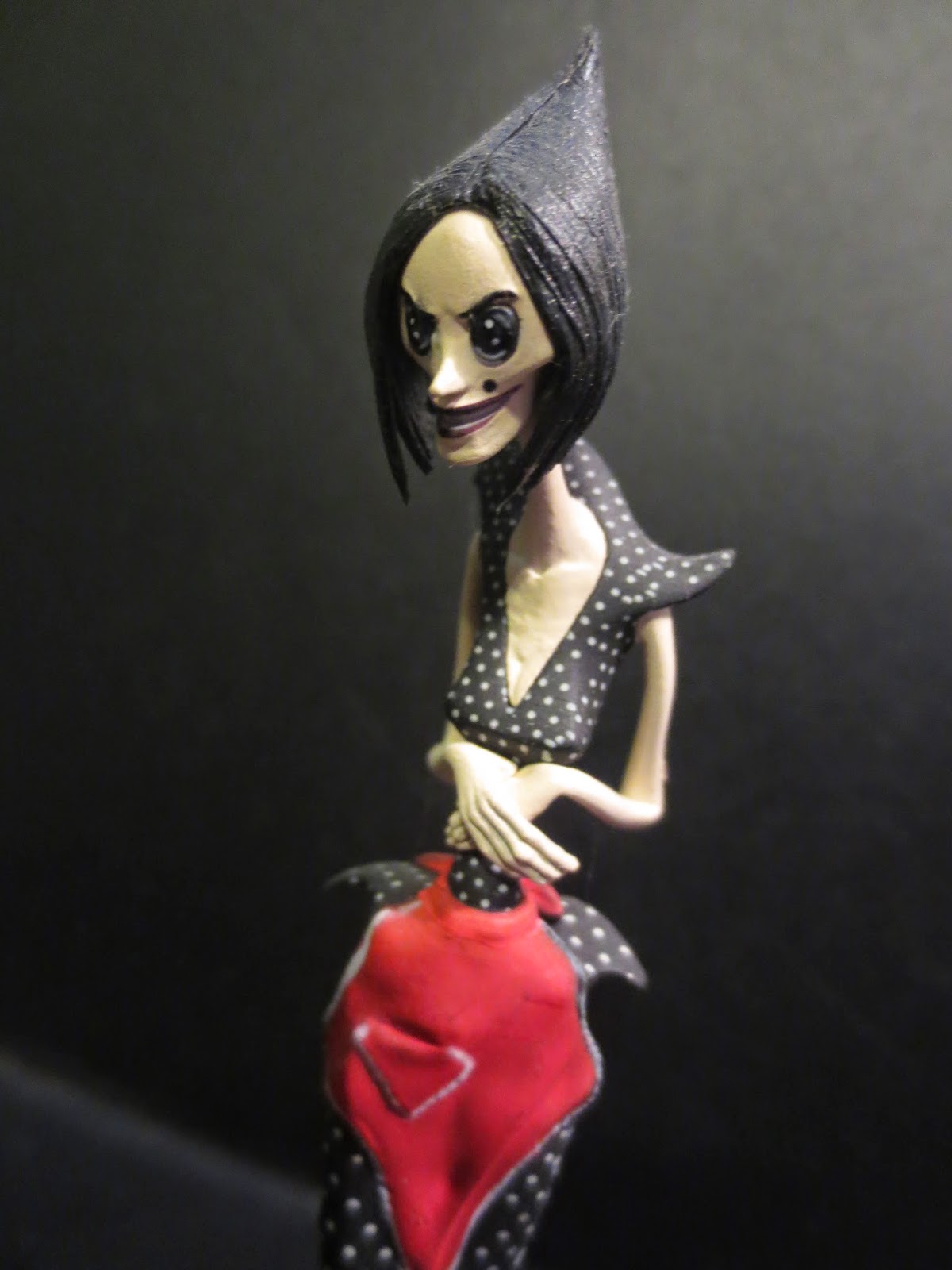 Last, but certainly not least, is the horrifying Other Mother! Voiced by Teri Hatcher, Other Mother is a sinister Other World being who takes on the visage of Coraline's real mother. Pointy, angular, and spider-like is the name of the game here and this figure really captures all of those details. Just check out this monstrosity! Decked out in red high heels, a black and white polka dotted dress, and an apron, she's 5 1/4 inches of domestic doom! Her tile floor base is not only intricately painted but the grooves in the tile are individually sculpted as well. 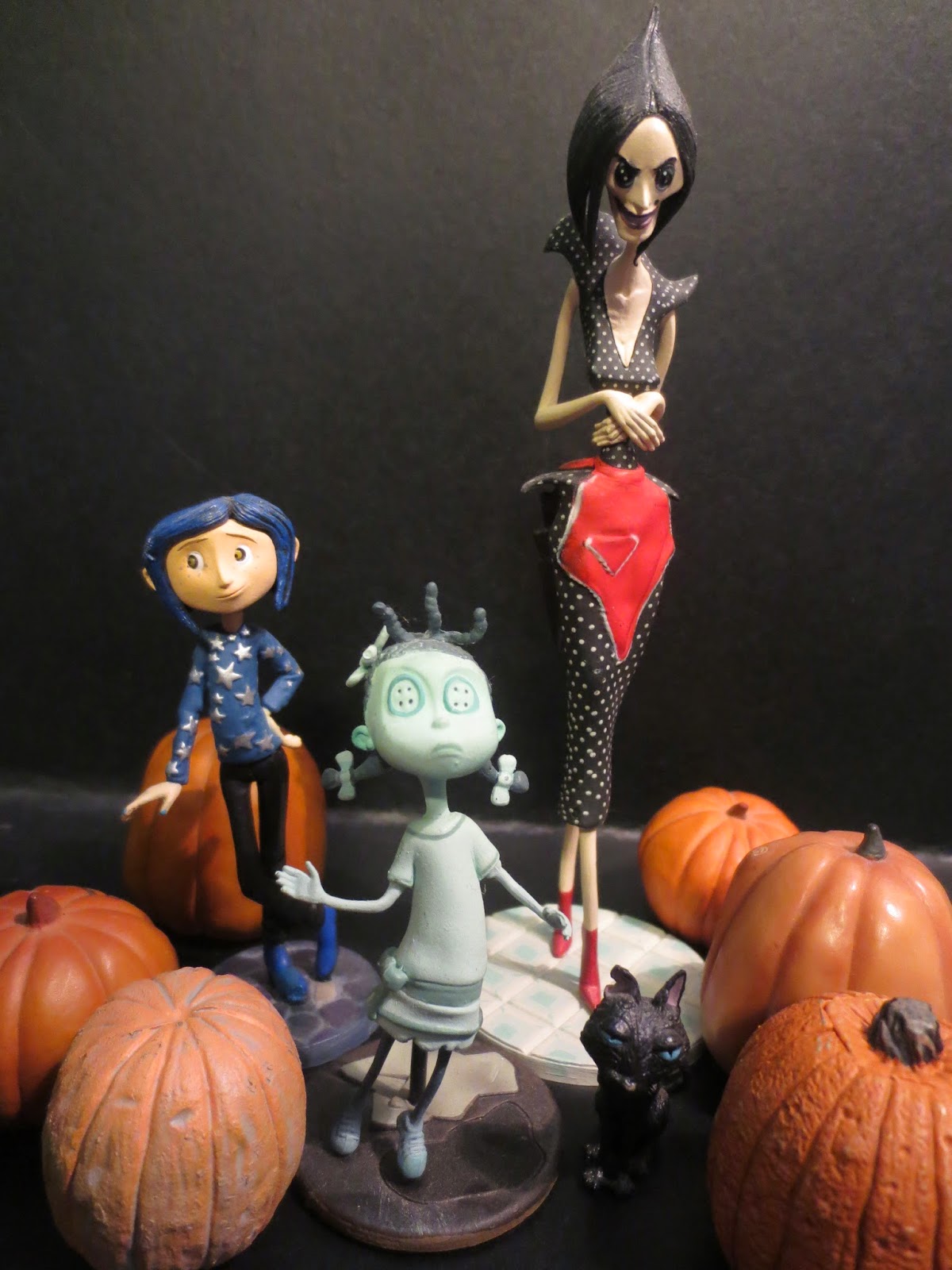 This is really a neat little set with excellent sculpts, pretty solid paint applications, and some fun poses. My only real complaint about this set is concern over how fragile these figures feel. Since we got these in 2009 they've always been on a shelf in our living room and they've rarely, if ever, been removed. Unfortunately, if online reviews and discussion is to be believed, a lot of folks who purchased these were expecting something more along the lines of PVC figures and, thus, a lot of breakage happened. Lots of stop motion characters like those from Coraline, Corpse Bride, James and the Giant Peach, and The Nightmare Before Christmas all seem to have very spindly proportions (because it makes them easier to animate), but unfortunately it also makes toys and collectibles based off of them delicate. My set is in good shape though, so I can't knock these figures too much. Don't buy them for kids (they're also now insanely pricey) but for Coraline fans, these are a neat piece of memorabilia. Easily a Great rating for this set!