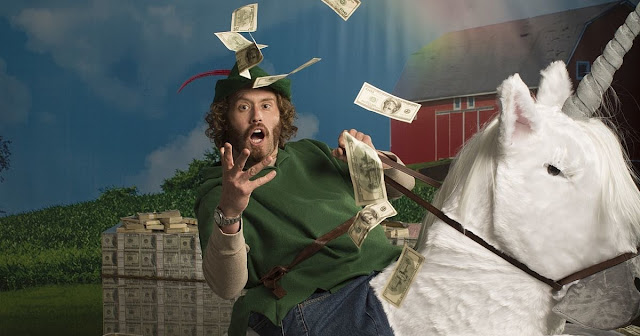 Bad news for HBO, and fans of Silicon Valley!  Rising Superstar Comedian: TJ Miller, as well as HBO have confirmed that he will be leaving the hit show.   Miller plays the insanely hilarious overweight stoner/pitchman: Erlich Bachman.  The good news for fans of the show is that HBO has given the 5th season a green light, but for what will inevitably be lackluster season with the absence of Miller.

Find out our thoughts on Miller's departure after the break...

For those of you that don't watch the show, picture a smart and witty Entourage set Palo Alto rather than Hollywood.  It may be a cliche to say in television that certain characters makes a show, however Miller's Bachman is as integral to the shows comedic timing as Ben Parson's Dr. Sheldon Cooper is to the Big Bang Theory.  The departure is being called a mutual one, and if I had to speculate would be due to the fact that HBO couldn't compensate the rising standup/movie star.

This is especially sad news in the Bell household! Silicon Valley is one of the shows that my wife, and I absolutely have to sit down and watch together.  Our favorite character from the pilot has been Bachman!  To give you an example of how much we love the character, a few months back I sold all my FUNK POPS outside of my Carolina Panther, NHL, and our beagle one in honor of our two hounds: Cookie and Penny, the only Movie/TV one I kept was Miller's Bachman that sets on our living room bookshelf to this day.

Do you think Silicon Vally can survive without Erlich? Let us know in the comments below or tweet me @thereelbradbell